Due to illness, it had been eight weeks since I had ventured out with the camera. However, I was now feeling much-recovered and confident enough for a gentle trip out. For my first trip, I chose to visit Kelham Bridge. It offered the prospect of some birds and didn't require too much walking. It also has a couple of hides, which meant I could break the journey and sit down for a while if it felt necessary.

In the event, the visit was somewhat disappointing. I saw no birds of note, and none that were in a position to be worthwhile photographing. I did, however, find a few damselflies and dragonflies although that was not my objective, or even expectation, as it was quite cool and rather breezy, with the sun showing from time to time. The dragons, however, were not particularly obliging. There were also a few Speckled Wood butterflies around.

Usually I'd expect to see a few people at this place and, in fact, before I went I was concerned that the hides might be too full for me to find a seat. Clearly, not much had been happening here for a while and, encouraged by the dragons being around, I decided on a visit to the Sence Valley Forest Park which is nearby.

Although it was a fair walk from the car park there to the location I wanted to visit, I was not too bothered as there were benches to rest up on at approximately 200 metre intervals, including one beside the pool that was my target. To cut a long story short, although it was sunny, there was very little sun on the pool and absolutely no dragonflies or damselflies were seen there. However, I did see a few on my way there, and on my way back, and there were numerous Speckled Woods around too. Here are a few shots. For those of you not familiar with Beautiful Demoiselle damselflies, they can look very different, depending on the light shining on them and I hope the first two images, below, demonstrate this to some extent. 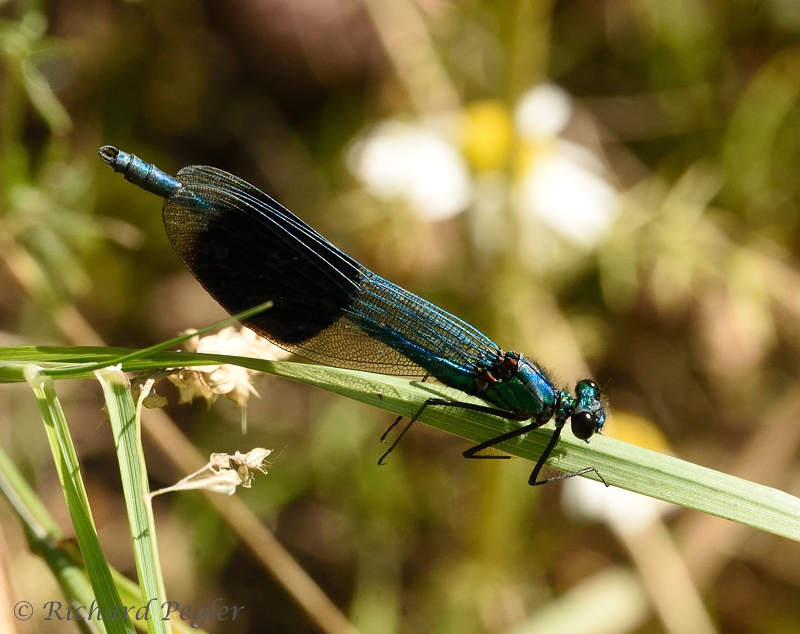 In addition to these, Migrant Hawker and Common Darter were seen, but not successfully photographed.

In spite of the sightings and photography being uninspiring, it had been an extremely worthwhile experience and, although these locations were relatively close to home and I'd only been out of the house for two and a half hours, it had boosted my confidence for further outings.

I expect my next blog post will feature another outing, three days later, with better sightings and which included a 'county tick' for me.