Well, here I am, back again!  Before I get stuck into my account of our adventures, I feel that I ought to put a few things in perspective. The holiday, although extremely enjoyable, was not without its problems.

Throughout the break, I was having significant problems with my eyesight. At first I put it down to tired eyes after long periods of driving but, after a few days, I realised something more sinister was going on. I was having great difficulty in seeing things through my camera viewfinder, and also in viewing things on the lcd screen and adjusting settings. Part way through, I found that my right eye - which is the one that I put to the viewfinder - was in really bad shape. If I looked at a fence with just my right eye open, it looked as if the fence was falling over, and I was peering through a fog. The results of my photographic efforts are way below par because of this. I did, however, start getting used to holding the viewfinder to my other eye. A call to the opticians on my return had them asking me to come in urgently, and I was diagnosed as having rapid onset of wet macular degeneration - a condition that also affects the ability to see details in the centre of one's vison. I was given an urgent (rather than 'emergency') referral to hospital and am currently undergoing a thorough investigation prior to surgical treatment.

On our way home, Lindsay started feeling unwell and the following day, when at home, she tested positive for Covid. I followed suite five days later. Neither of us suffered badly, and Lindsay are almost fully recovered apart from ongoing fatigue.

With all the above, it has taken a long while to sort out the photos I took while away and, because of my eyesight, I may have not done a good job of processing them - I struggle to see detail.

I managed to see three Large Red Damselfly successfully emerge from our garden mini-pond before we departed for our Hebridean adventure at 10.00.
We diverted to Boston Spa en route in the hope of having lunch at our favoured location there. When we visited last year, it was still the 'Deli-Cafe', but we had subsequently learned that it had become 'Da Carlo' and had gone 'up-market'. Nevertheless,  we had decided to give it a try. We were, therefore, disappointed to find on arrival at 12.00 that it was closed, despite the sign on the door declaring its opening hours that day were from 11.30. The day was not lost, however, as we found 'Harts Coffee House & Deli', where we had a splendid lunch and enjoyed friendly service. This will be our venue of choice in future.
Several comfort stops were required as we continued our travels northward but, other than adding 20 minutes to our journey time because of heavy traffic in the Edinburgh area, it was an uneventful journey, and we arrived at the Travelodge Kinross Services at 18.00.
Having had an excellent lunch, a light evening meal was all that was required, and so food was purchased in the M&S shop in the service area, and eaten in our room.
After a fairly tiring journey,  we turned in for an early night at 21.00.
Friday, 20th May                          Kinross to Uig (Isle of Skye)
We both slept relatively well, but were awake from around 05.30, so had an earlier start than expected. A missed turn just before Perth landed us on a slower but picturesque route.  It also gave us the delightful sighting of a Red Squirrel carrying a youngster across the road in its mouth.
A stop on the A95 in a lay-by with 'public conveniences' beside Loch Earn gave us views of the loch and the unusual sight of a drake Mallard waddling along the grass verge of a main road.
Various stops were made en route, including at Ardelve where we had a good view of Eilean Donan castle - in the rain! Here we enjoyed coffee and cake, followed by a visit to a craft fair. Lindsay found some items of jewelry to purchase!
Having crossed over the sea to Skye (not by bonnie boat but by the Skye Bridge from Kyle of Lochalsh)  we saw, to our dismay a large illuminated sign declaring that the next ferry crossing to North Uist was cancelled. To the best of our knowledge,  we were booked on the next scheduled ferry. To cut a long story short, we found that the booked ferry had been holed the day before, and we were now booked on a later smaller ferry on the Saturday. This would have the unfortunate result that we'd arrive on North Uist after the Co-op shop had closed, and with shops closed the following day (a Sunday), as we were in self-catering accommodation, food would be in short supply!
Having arrived at Uig, we checked into our B&B, "5 Glenconon", for the night, where the proprietor, Shirley, very kindly offered a change of room to a ground floor one, to save Lindsay coping with the stairs. We then set off for fish and chips (table booked for us by Shirley) at the Uig Hotel - and very good it was too!
After tea we took a ride out on a highly scenic road from Uig to Brogaig that we hadn't travelled on before and Lindsay spotted a distant White-tailed Eagle. I only managed a distant record shot.
On returning to base we had a mug of coffee while I wrote up my notes, and then turned in shortly after 21.00.
Saturday, 21st May                     Uig to Lochmaddy (North Uist), to Clachan Sands
Lindsay and I were both awake quite early, and wished we had booked a breakfast for a little earlier than the 08.00 that we had booked. We had both had a rough night, purely because of concerns about the knock-on effects of our delayed sailing.
While waiting in our room, we watched the action at the garden feeders which was boosted when Shirley, the proprietor,  chucked out some old bread under the feeders. I was quite surprised to see a couple of rabbits tucking into the bread.
Breakfast was excellent, even if it was interrupted by me needing to return to our room to get my camera when a couple of Hooded Crow decided that they too wanted some of the bread. I think it's safe to say that this was a 'garden lifer' for me.
We left our B&B at 08.50 and I suggested to Lindsay we should go to the ferry terminal, just over a mile away, to enquire about arrangements for our modified departure. This turned out to be one of my best decisions because, on approaching the people organising the boarding, they asked if I had my vehicle and tickets to hand (which I  had), and they then told me that if I fetched my car and parked in the reserve lane they were pretty confident that we could be on our way in half an hour! We were, and this meant that we would arrive on North Uist 10 hours before the time that they had rescheduled us to.
It was a cool, grey and showery morning as we set off. The crossing was uneventful and much less in the way of wildlife was seen than we have found in the past. I stayed outside for the duration and got quite damp and chilled. Lindsay stayed inside for the first half of the journey but had to spend the second half outside because there was a bit of a sea swell going on and the motion was getting to her. Here are some of the few birds that I managed distant shots of. 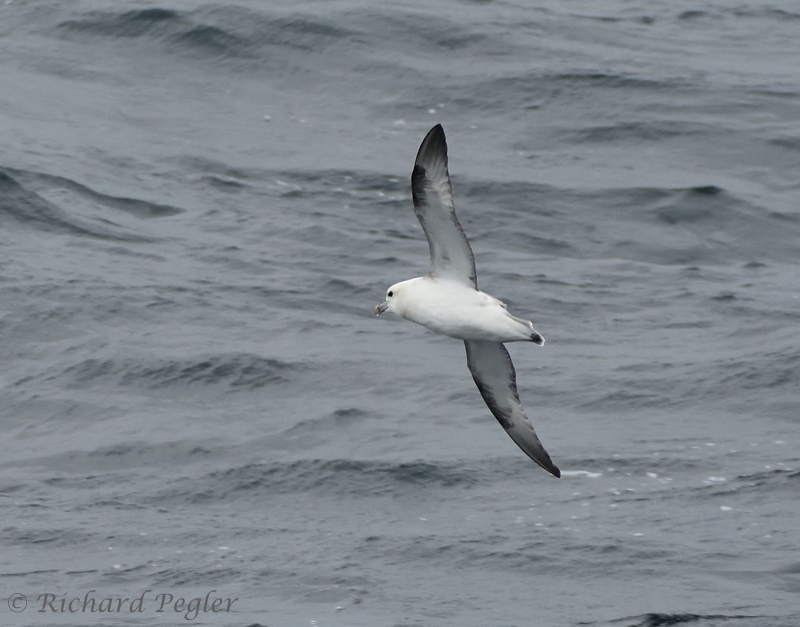 On arrival at 11.30 we made haste directly to the Wee Cottage Kitchen (a mobile cafe at the water's edge beyond Solas that we found to be excellent last year), and had an extremely enjoyable light lunch. A drake Eider treated us to a stretching session while we were there. 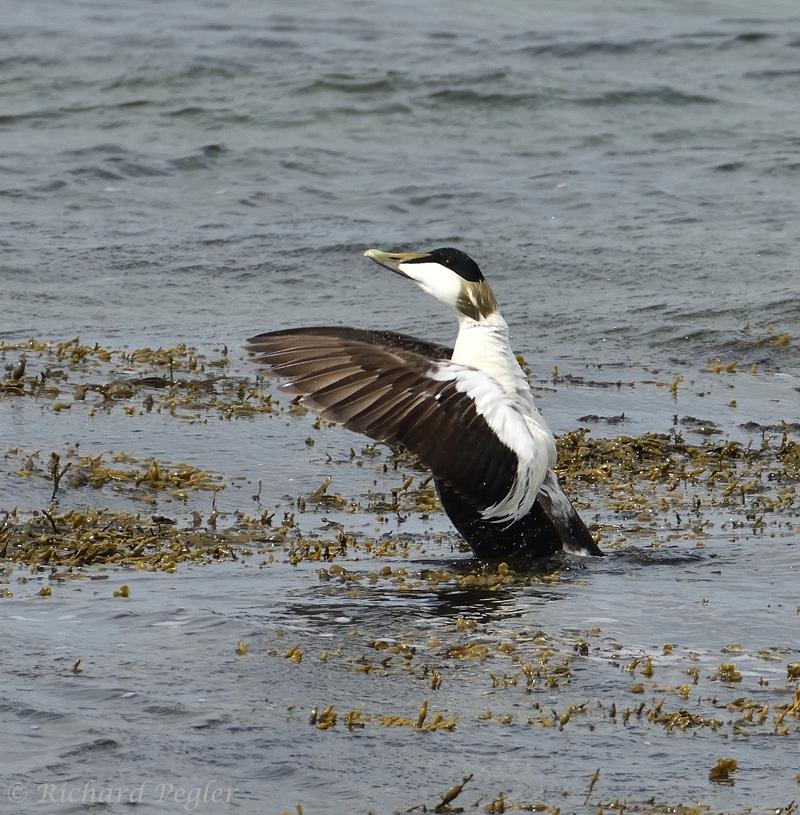 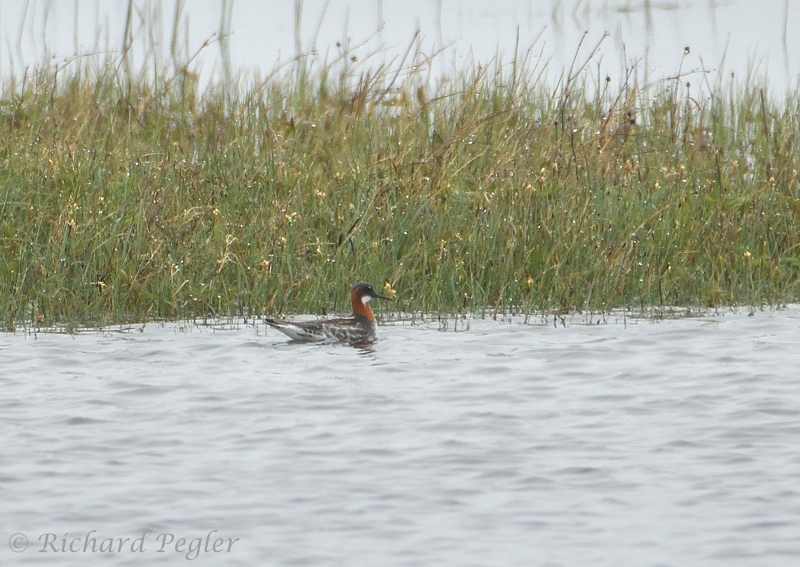 When the mist became much more dense it was time to depart. Our journey took us past Stinky Bay again so, as the mist had cleared and turned to rain, we stopped to see if the scoter was any closer to the shore. It was not, but it would be a shame not to offer another shot of this bird.
Little was seen on our return to base and the weather dictated that we had an evening in. Tea primarily consisted of hot-smoked salmon from the Hebridean Smokehouse, which knocks the mass-produced stuff into a cocked hat.
This brings me to the end of Pt.1 of my account of our visit to the Outer Hebrides. I suspect that Pt.2 will be in about a week's time - depending on a few things scheduled to happen in the interim, for which fingers are crossed! In the meantime, take good care of yourselves and Nature. Thank you for dropping by - - - Richard
Posted by Richard Pegler at 10:38 18 comments: