In my last blog post relating to owls I mentioned some Little Owls (Athene noctua) which Titus and I had found, following a tip-off from the local farmer. We'd seen two juveniles at this location, and as it was only approximately 600 metres away from my Site No.41, we were reasonably confident that these were dispersed juveniles from that site. Within a few hours of publishing that post we'd changed our minds! The story will unfold!

In 14th August, immediately after publishing that post, I headed over to Titus's place and we set off on our usual owling route. We soon diverted to where the juvenile LOs had been seen and, almost immediately spotted one in the fork of a tree, which was joined just a short while later by its sibling.

Soon one of the young owls got bold and popped up onto an exposed branch to have a better look at the piece of machinery (Titus's car!) which had stopped by their tree.

It didn't stay long before it headed off down the fence line. Then juvenile No.2 dropped down onto the gate beside us! I'll apologise here and now for the lack of variety of locations in the multitudinous images  in this post. For me, the beauty is in the poses and expressions of these wonderful creatures. There's also some feet in there for the benefit of Doug and Noushka! 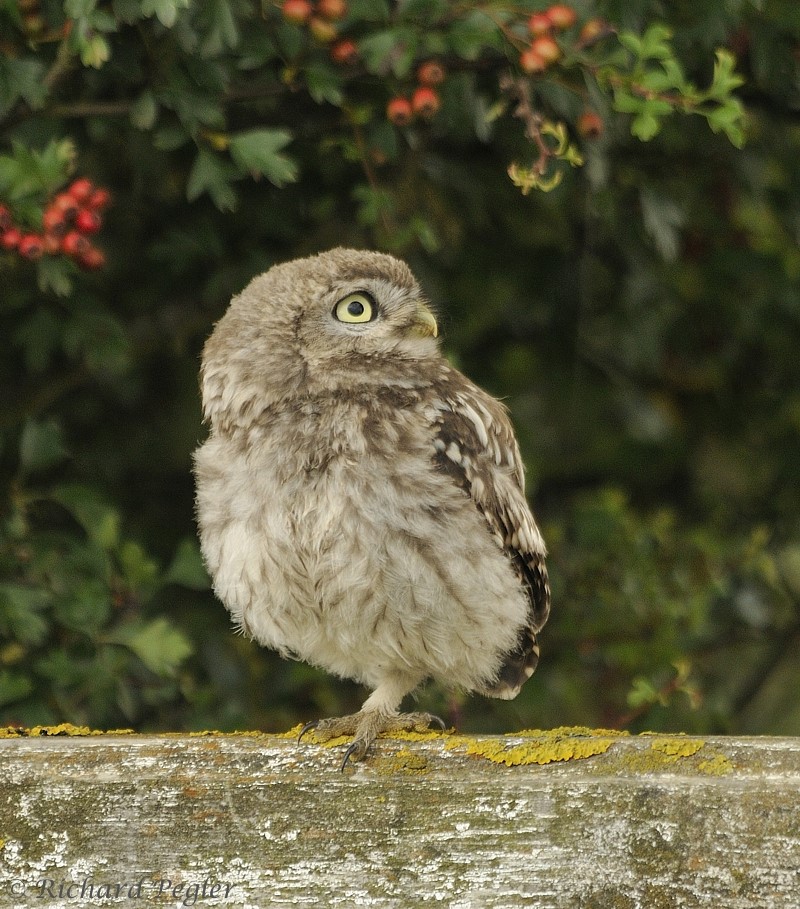 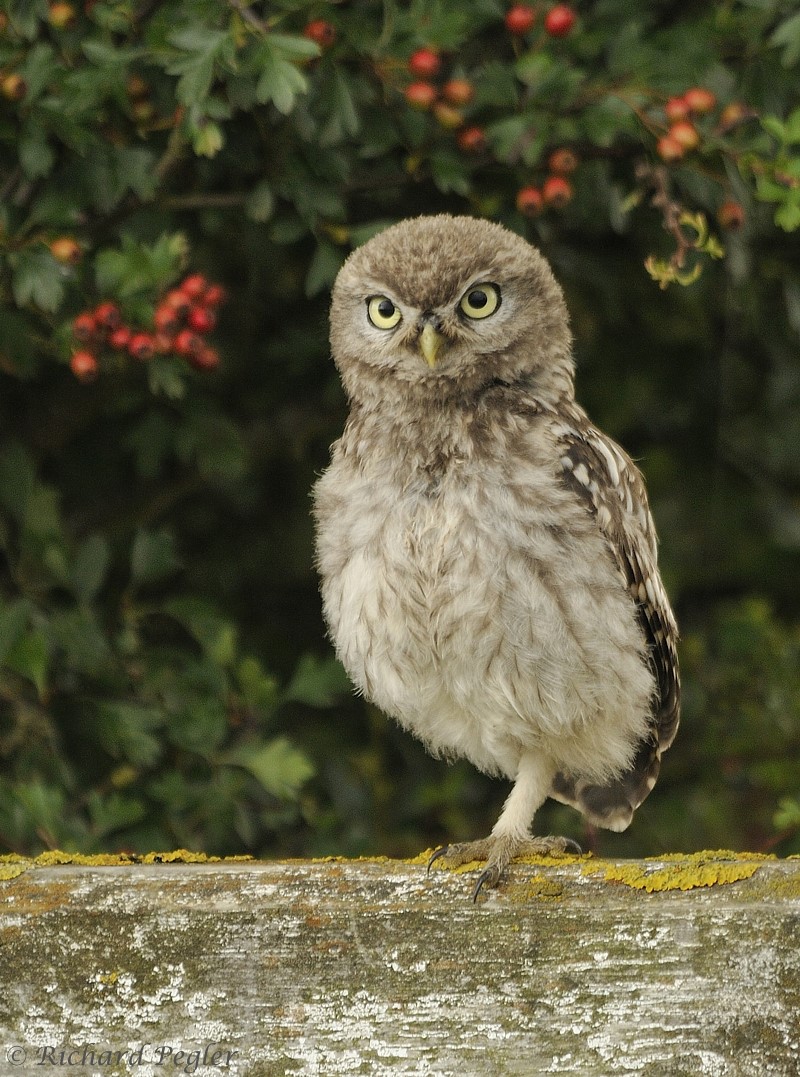 Juvenile No.2 then moved along the top bar of the gate and started playing with some blue baling twine. Titus and I couldn't stop chuckling as it did so! 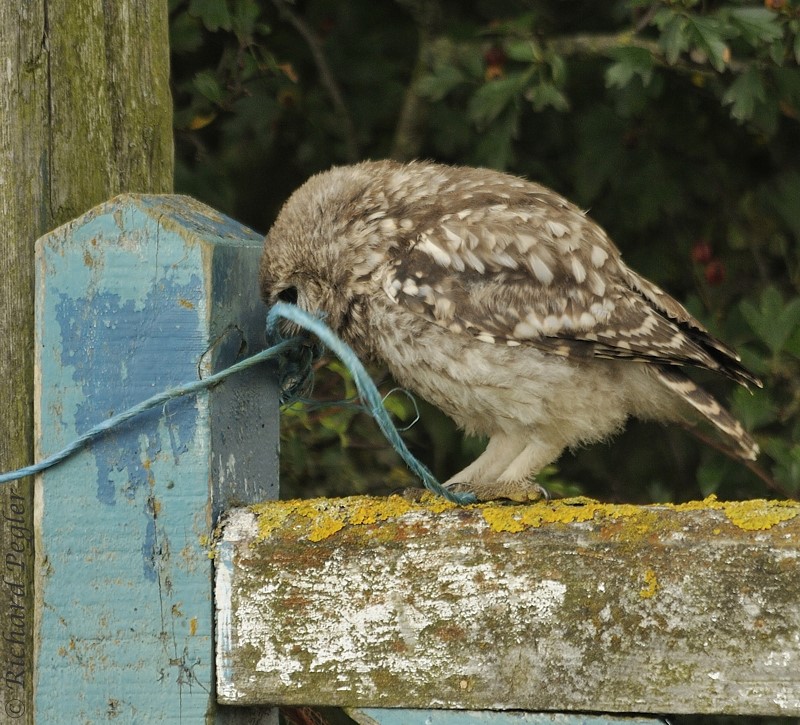 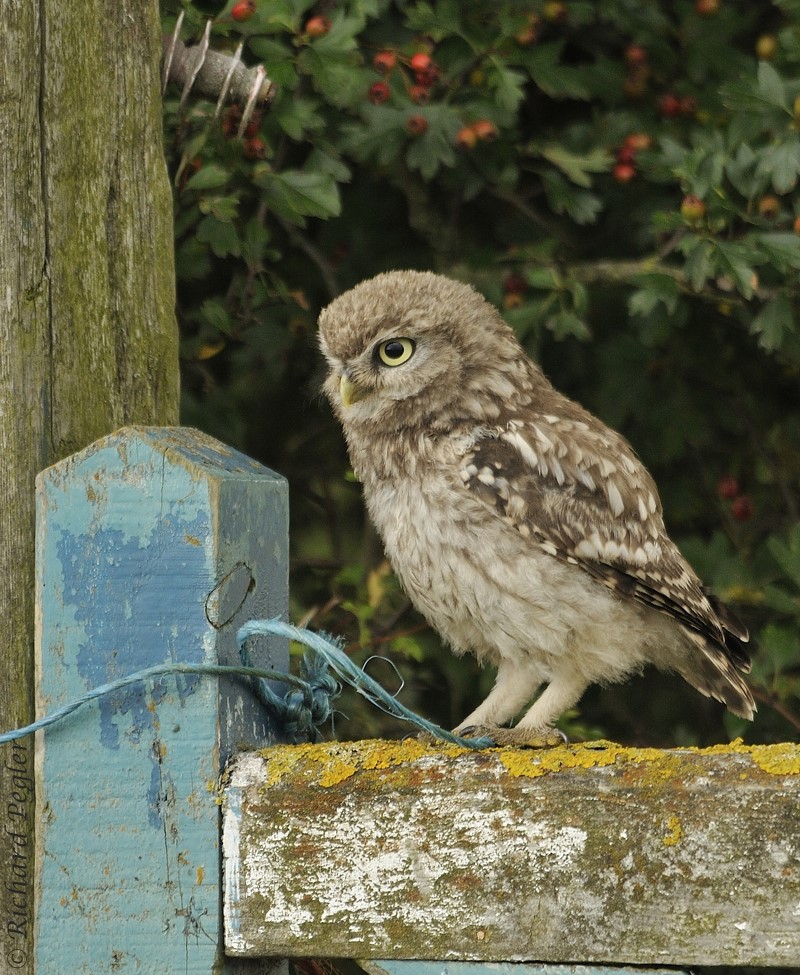 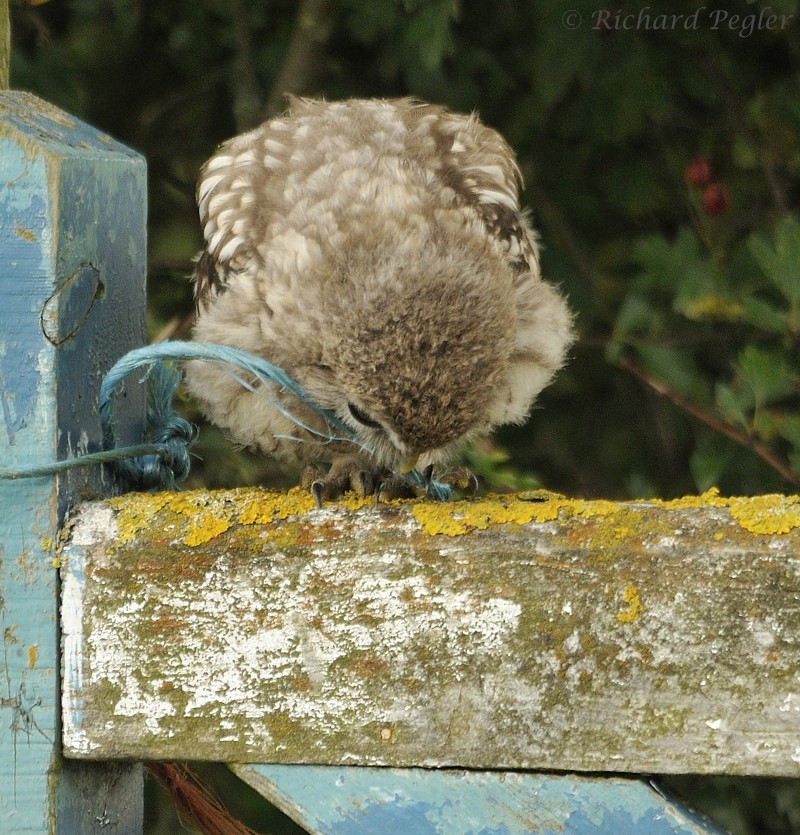 Meanwhile, juvenile No.1 had started making its way back up the fence line. It spent a short while preening before heading off and ending up in a place where we could see it, but photography was impossible

We'd started to wonder about some LO calls that we were hearing but which sounded rather 'adult' and not quite in the direction of the juveniles were were observing ( I often find it difficult to pinpoint the direction of owl calls - possibly due to the hearing aids that I wear these days). Suddenly Titus spotted the owl, well hidden behind some leaves. With a bit of manoeuvring, neck craning, and luck with the wind on the leaves, a shot was managed of an adult owl. It was at this point we realised that we almost certainly had a new LO site, and not dispersed juveniles from Site No.41.

The young owls seemed to respond to the calls of the adult, and suddenly beetled off home, and we decided that it was time to go.

The following day I was on duty on the LROS stand at Birdfair. On my way home from that event, I called in at No.48 again, and was rewarded with the sight of one of the juveniles. At first it seemed quite lively. I particularly like the first image which reminds me of a heraldic 'lion rampant' 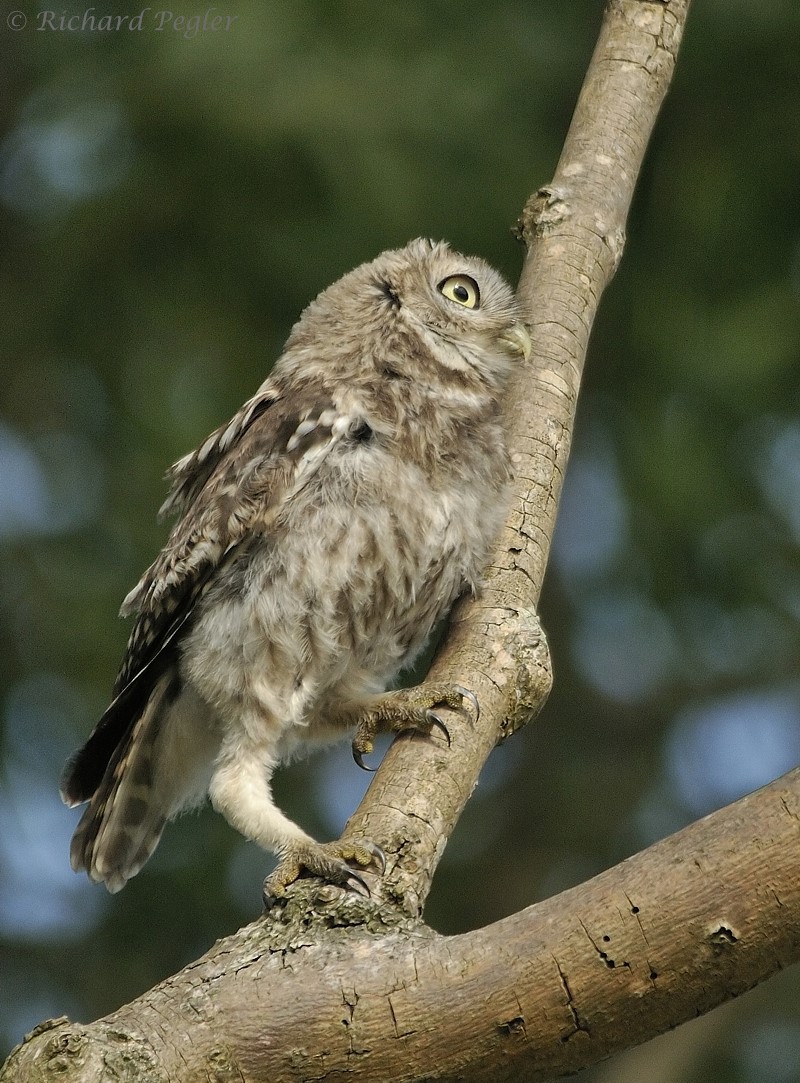 After this, the bird got decidedly sleepy. The following, in the sequence in which they were taken, shows what I mean! I just wish the feet had been visible! 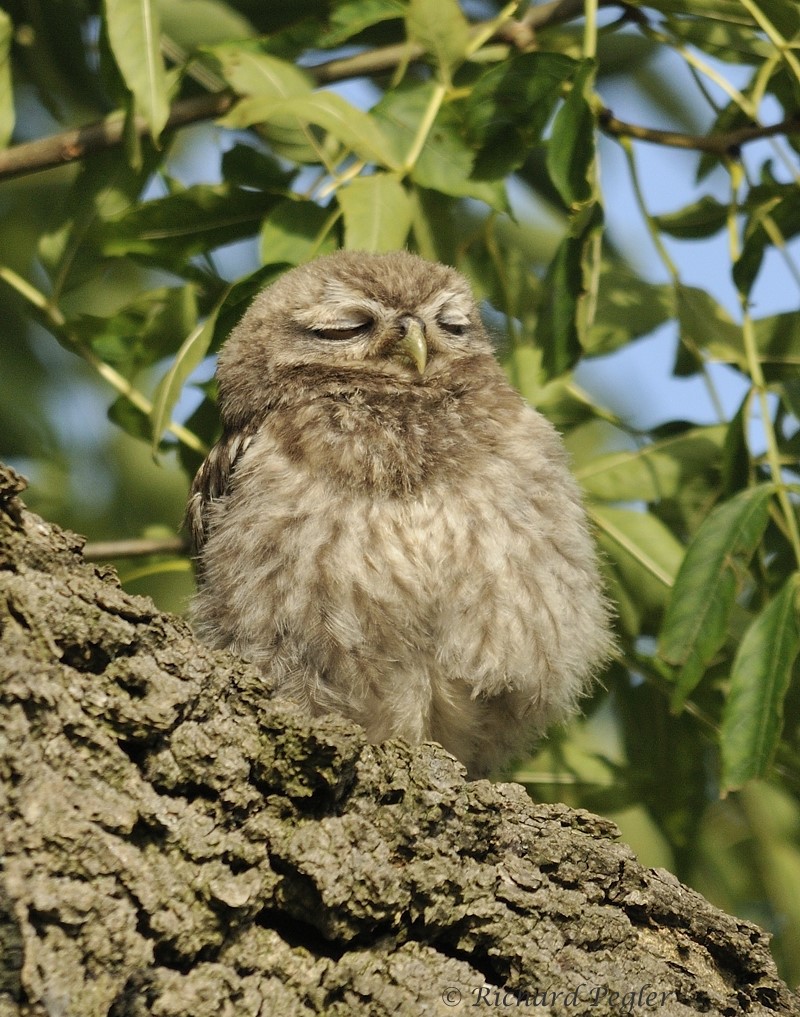 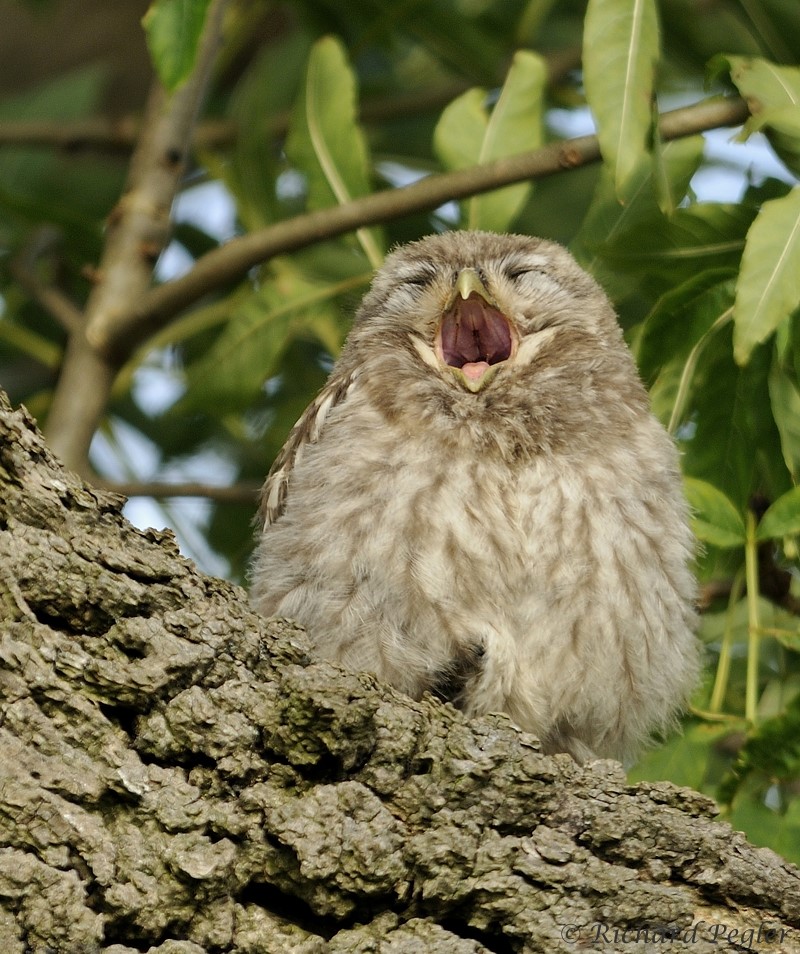 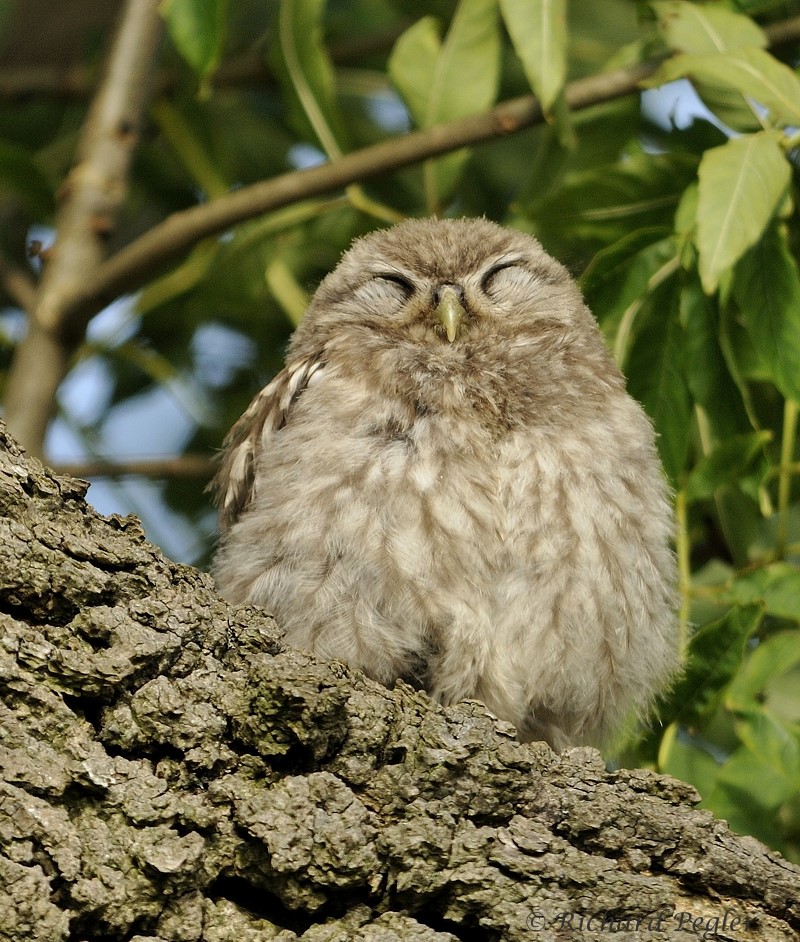 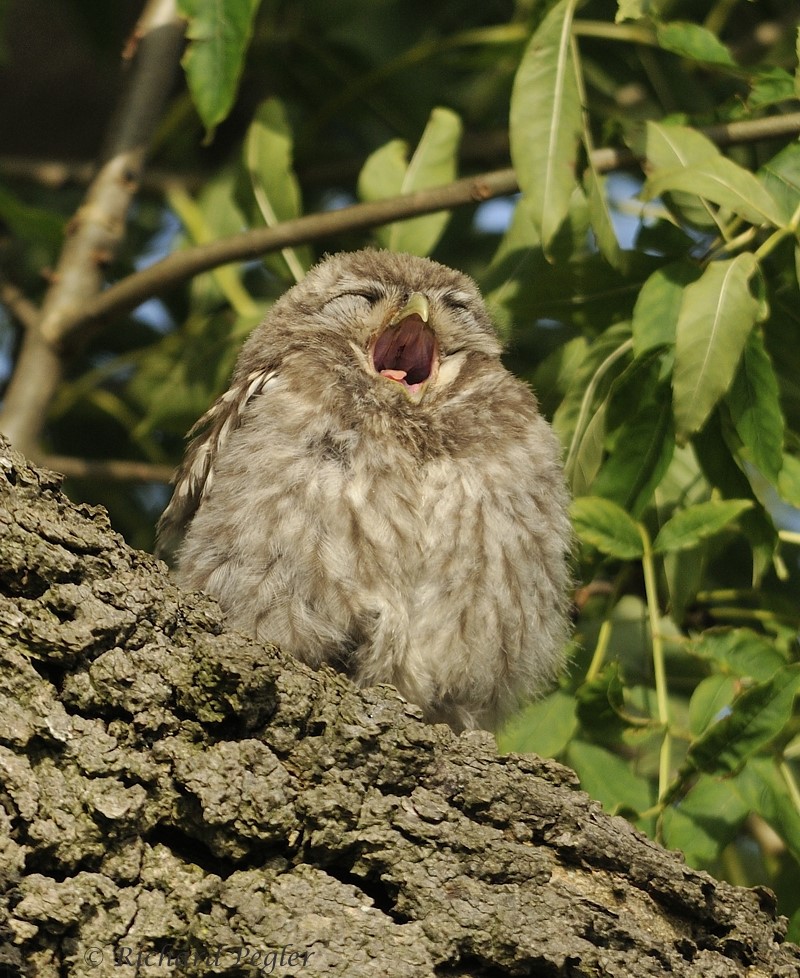 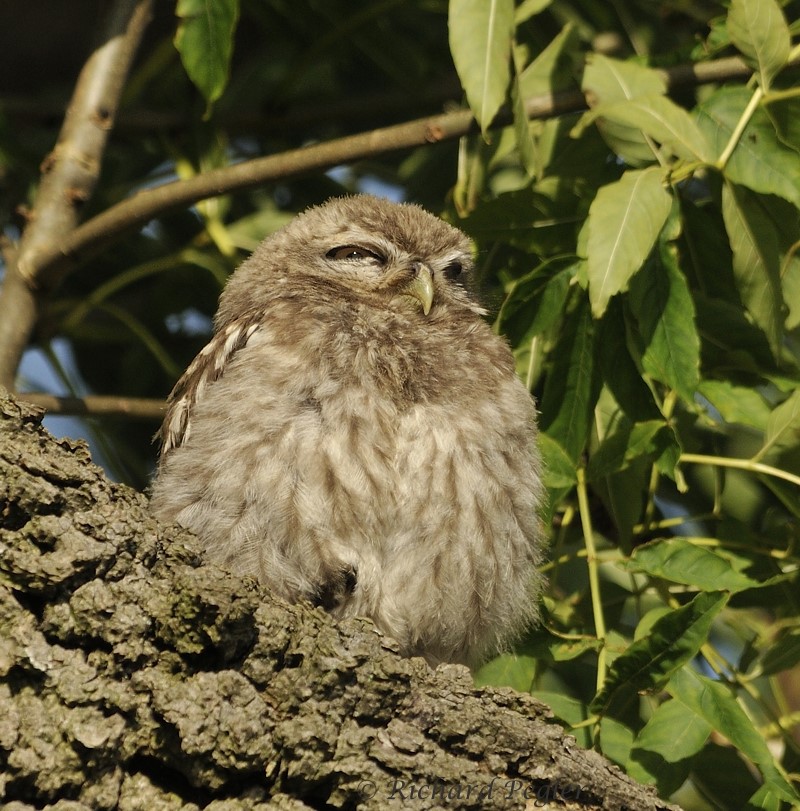 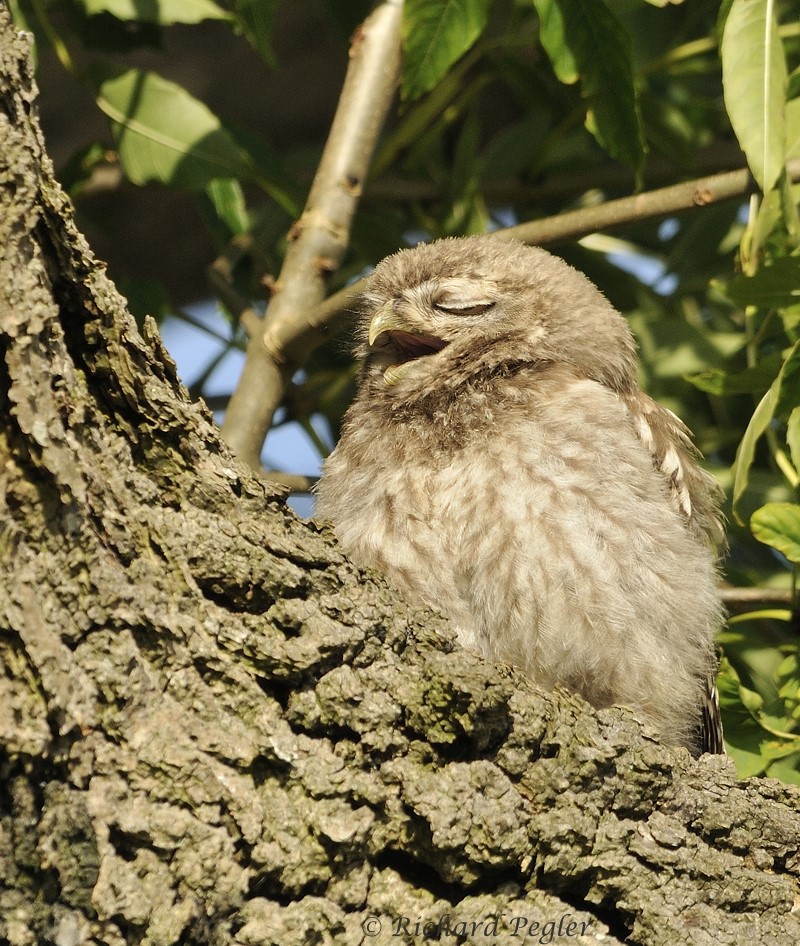 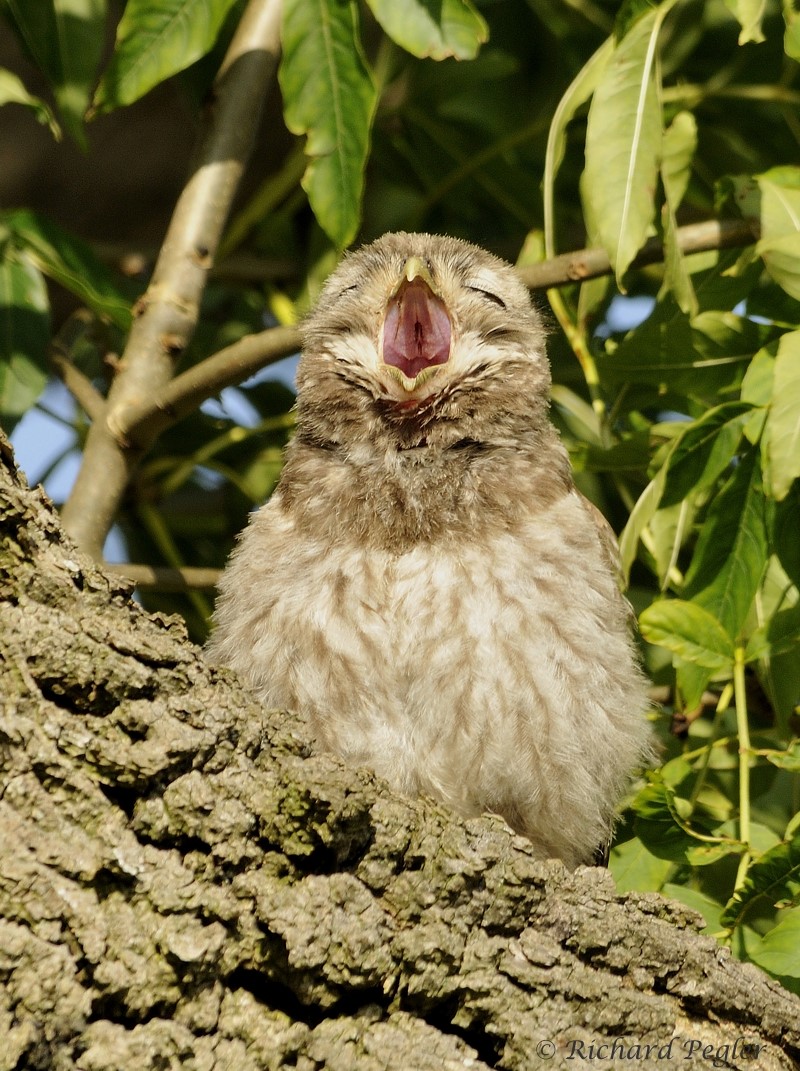 The very last shot that I fired off that day, has to be one of my favourites of all time, and is the subject matter of the sub-title of this post. I give you, Ladies and Gentlemen, The Phantom Raspberry Blower!  (sorry if the expression is lost on my overseas readers - click here to help with your understanding)

Subsequent visits have confirmed the 'new site' status, but I think that's enough of Little Owls for one post! The area looks to be promising in other respects too. The next image was taken less than 100 metres from the nest tree.

Thank you for dropping by. There'll probably be more owls in my next post - the hint is in the current header image!
Posted by Richard Pegler at 10:32 16 comments:

Whilst I did not do much photography in my garden in July, it did provide plenty of interest and some excitement!

After quite a long period of absence, a male Sparrowhawk (Accipiter nisus) has been paying us frequent visits. As yet, I'm not aware of it actually catching anything, but there have been plenty of near misses!

On 27th July we had a very rare visit from a Willow Warbler (Phylloscopus trochilus). Only record shots were obtained, however.

We got spoilt last year by the family of Great Spotted Woodpecker (Dendrocopos major) that spent the summer in our garden. GSW visits have, sadly, been rare this year. Here's a juvenile that visited us on 26th July.
The really unexpected happened on 29th July when a Whitethroat (Sylvia communis) visited. Whilst not a rare bird in itself, it's not common in suburban gardens. Again, unfortunately, only record shots were obtained.

This has probably been the best summer ever in our garden for juvenile birds. just to lighten the atmosphere, how's this for a comical ball of fluff!!

It is, of course, a juvenile Long-tailed Tit (Aegithalos caudatus).

I've not spent any significant amount of time with these this year, but I'm rather glad that I've not totally ignored them, as I'll explain later.

Every year we get Vapourer Moth (Orgyia antiqua) caterpillars in our garden, but this year they've been extremely scarce. This is the only one I've found to photograph.

On 21st July, whilst sitting in our conservatory, my eye was taken by a butterfly landing on one of the Buddleia bushes. It was our first ever fritillary. This was a Dark Green Fritillary (Argynnis aglaja), which I understand is somewhat rare in our county! Sadly, this was a rather tatty specimen. 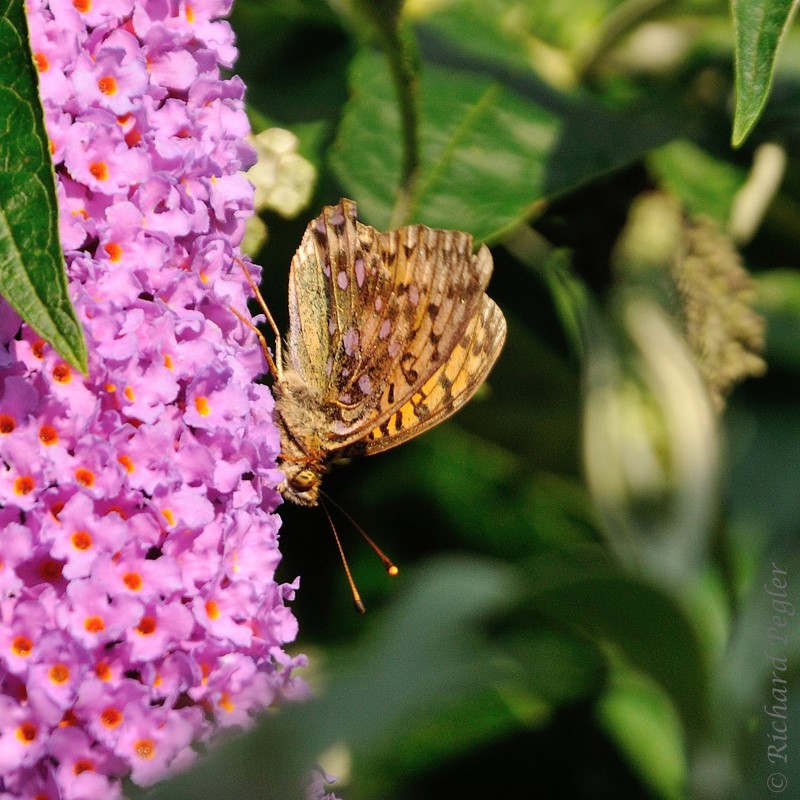 The following two images are of extremely common butterflies but, in my opinion, species that are spectacular for different reasons - the first for its upper wing markings and the second for its wing shape.

Early in the month we had two visits from a Common Toad (Bufo bufo). In reality, this creature is probably living undetected in our garden. It was quite amenable, and let me pick it up and place it where I could take photos. Here's a few! 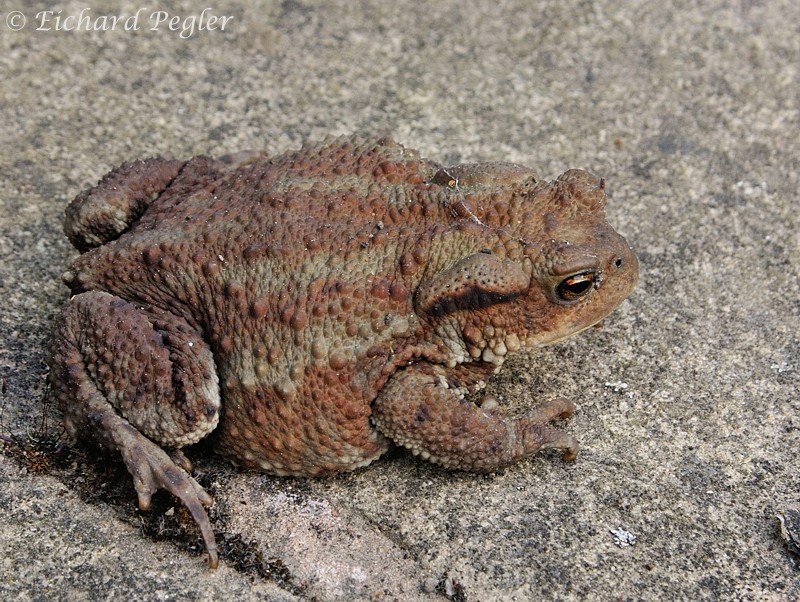 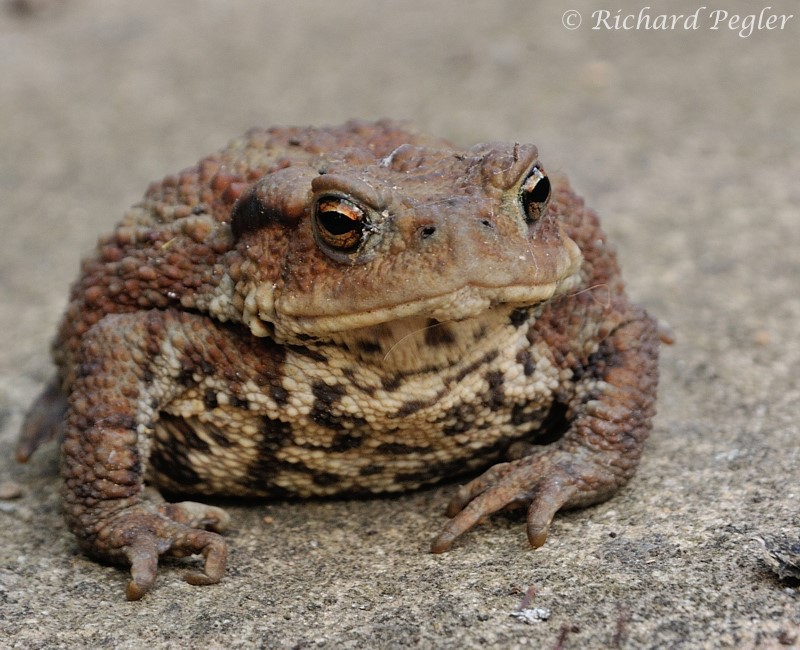 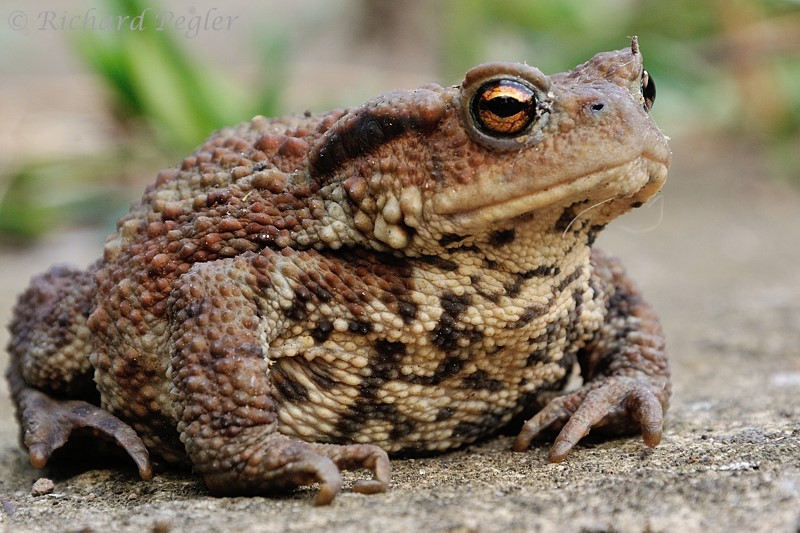 I've already posted an image of a Fox (Vulpes vulpes) taken with the wildlife camera that I had for a while. The first camera was faulty from the word go, but the second camera worked well for about two weeks before it too went faulty - and was returned to the supplier for a full refund.

Here's some video (first time I've posted video on my blog - thank you Noushka for your advice) of a fox which, unbeknown to us, was visiting our garden on a regular basis. The camera also recorded sound, but for these clips only came up with strange electronic noise, so I've overdubbed some music - if you don't like it, please turn your sound down.

We've also go at least two Hedgehogs (Erinaceus europaeus) visiting us each night - hopefully living in the 'hogitat' that we installed last year, but I'm not going to disturb it to investigate. Here's a still image, taken with low-level flash.

Here's some video of Hedgehogs in my garden:

And here's some video of the Fox with a Hedgehog!

Thank you for dropping by. I expect that it will be back to owls for the next post.
Posted by Richard Pegler at 22:34 18 comments:

I had, originally, intended for my next post to be on events and surprises in my garden in July, but I'm not quite ready with that yet as I'm trying to work out the best way to have video in a post - any hints and tips would be welcome! Instead, I'm back to my favourite subject - Owls!

On 26th July I had observed (at a considerable distance) the antics of juvenile Little Owls (Athene noctua) at my Site No.17. The following day (27th July) I was back, but this time with my portable hide which I set up at a range of about 15 metres from where I hoped the action would be.

I'd been there for about half an hour before the first owl appeared. It was an adult, which checked me out at from a tree at a distance of about 25 metres.


This owl stayed put, barely moving a muscle but keeping and eye on me, before the first juvenile appeared some fifteen minutes later.

I only had to wait another couple of minutes before the second juvenile appeared. This particular area of this site is very cluttered with unsightly dross. However, at this range, I managed to exclude most of it from the images. The upside to this area is that there are multitudinous places (mainly fence posts) for the owls to perch. In the images that follow, I've tried to show this variety of perches without too much repetition. Here's a couple of the second juvenile. 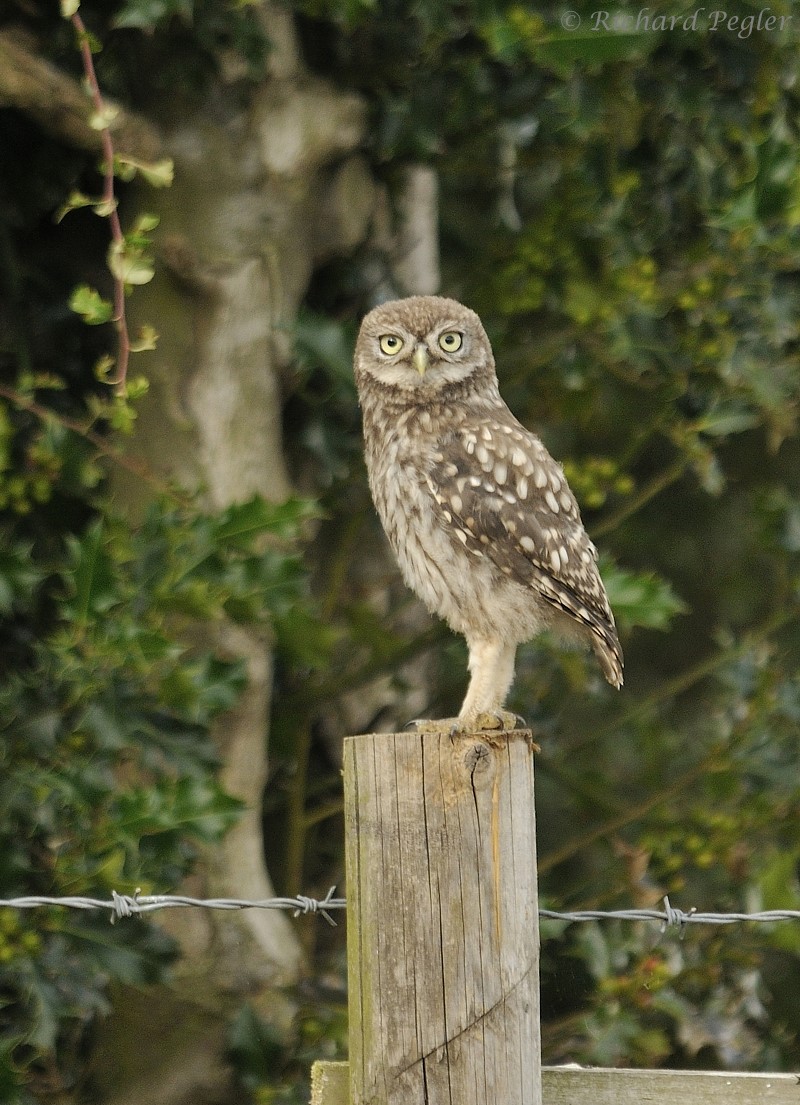 It was only a few minutes after that that there was a call which heralded the arrival of the third juvenile. Unfortunately I didn't manage to get the three juveniles in one shot, and only managed a very poor image of two in one shot.

Juveniles Nos.1&2 departed, together with the adult bird, just leaving me in the company of No.3. I took many images over the next hour, and here are some from that session. 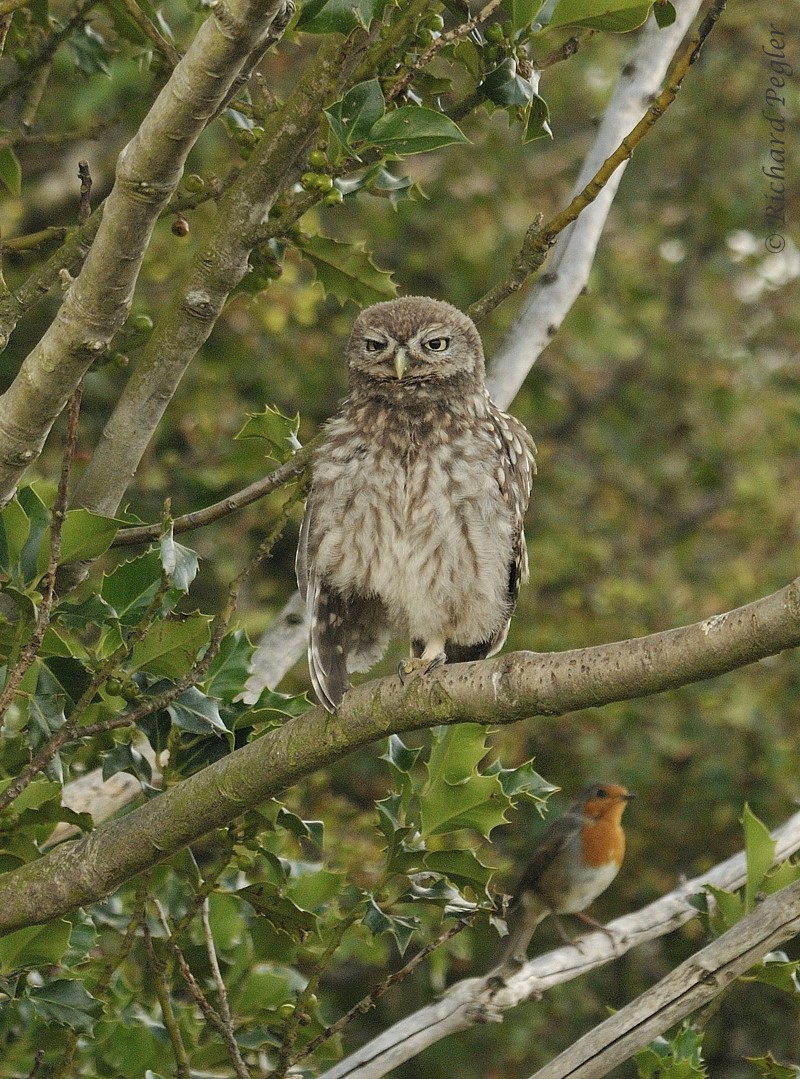 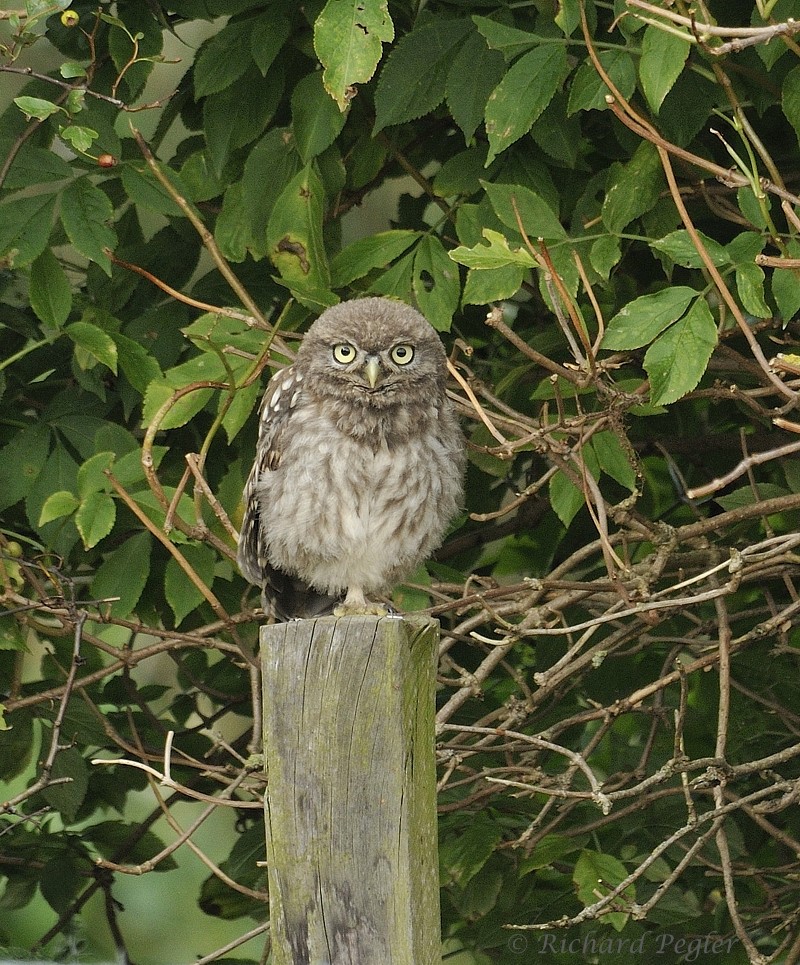 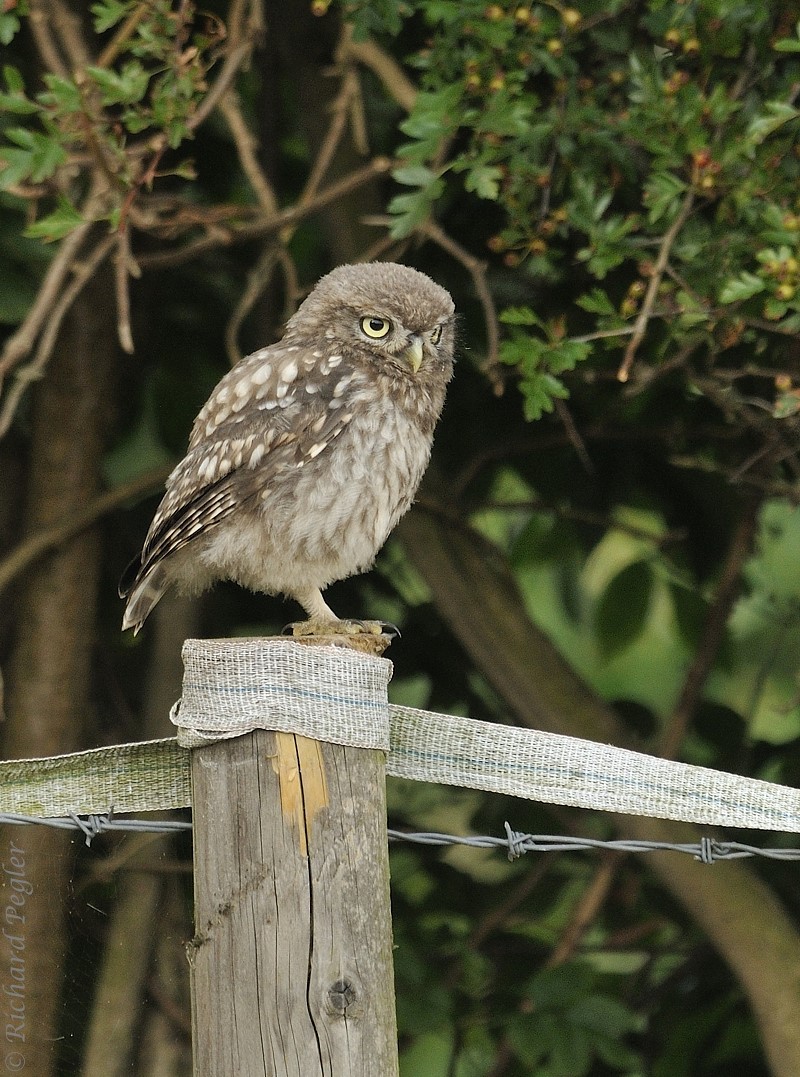 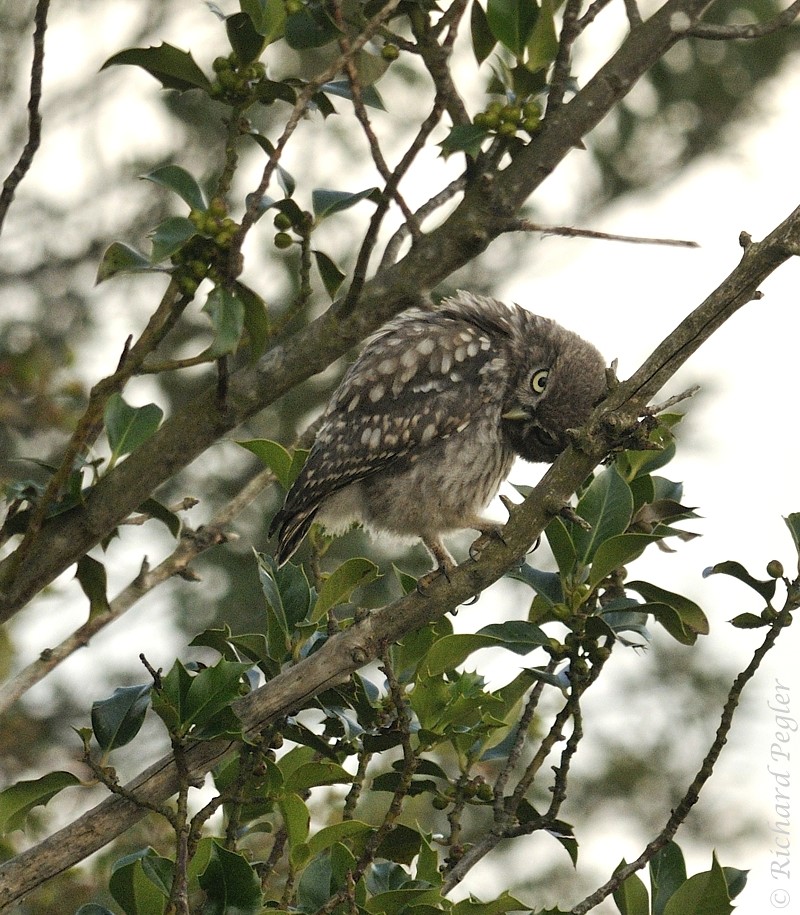 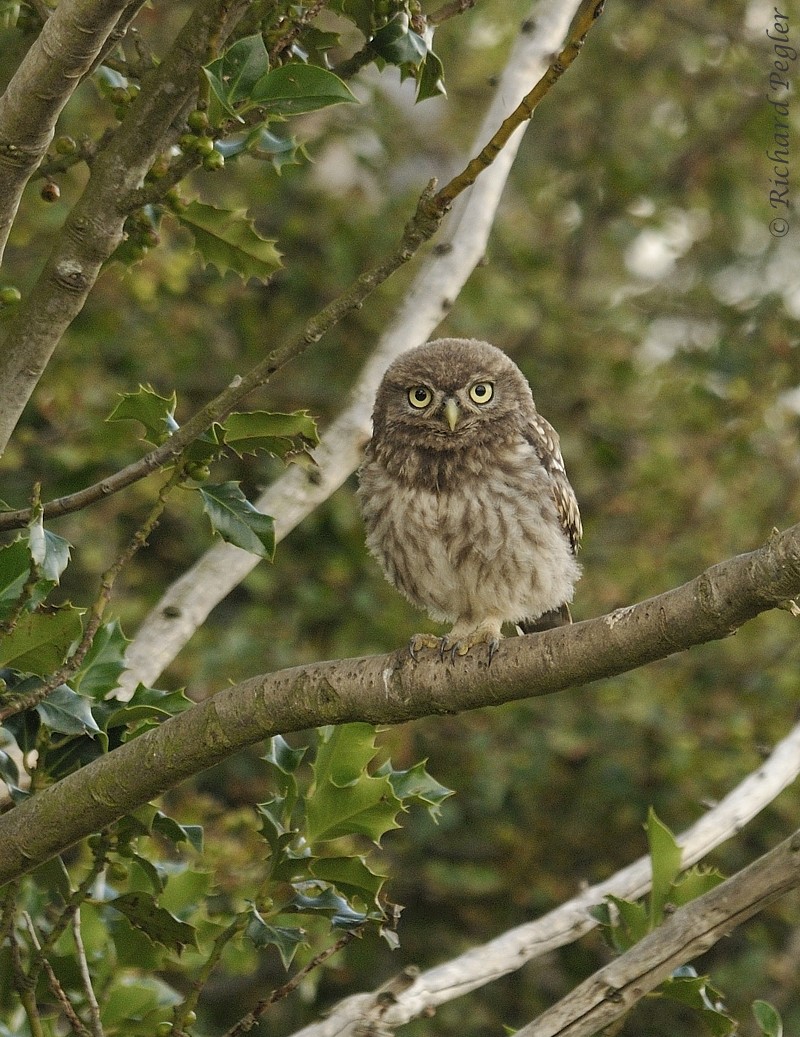 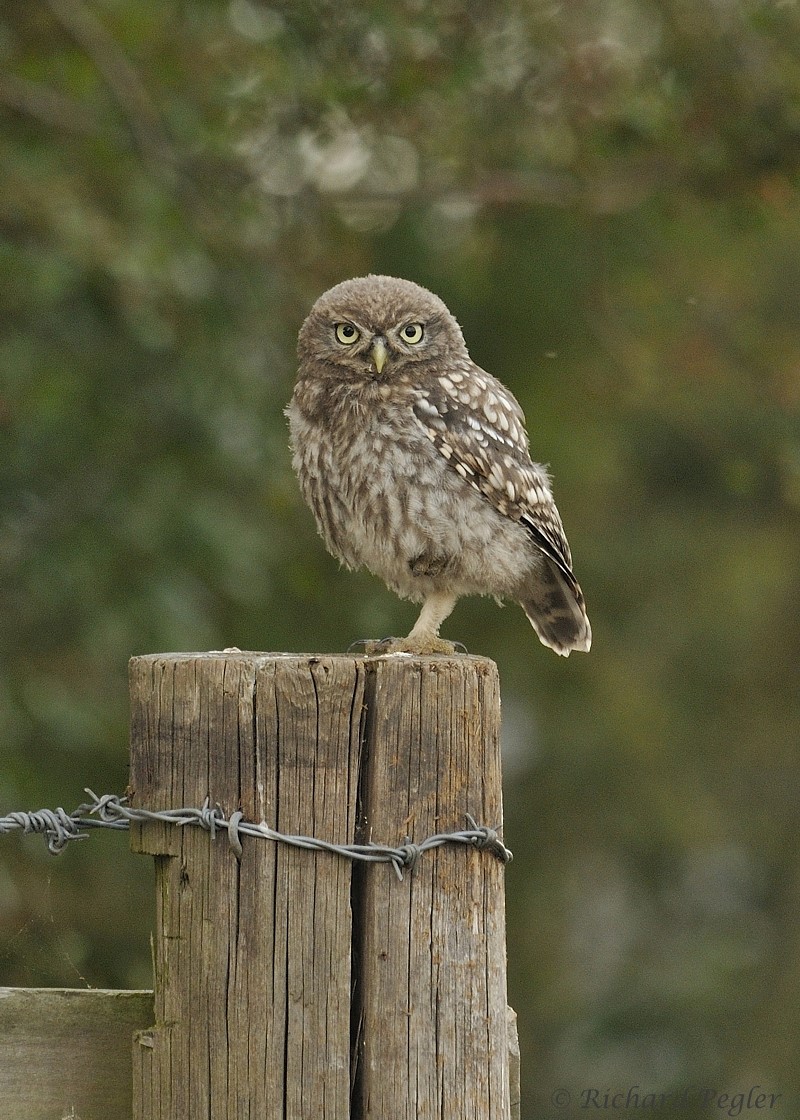 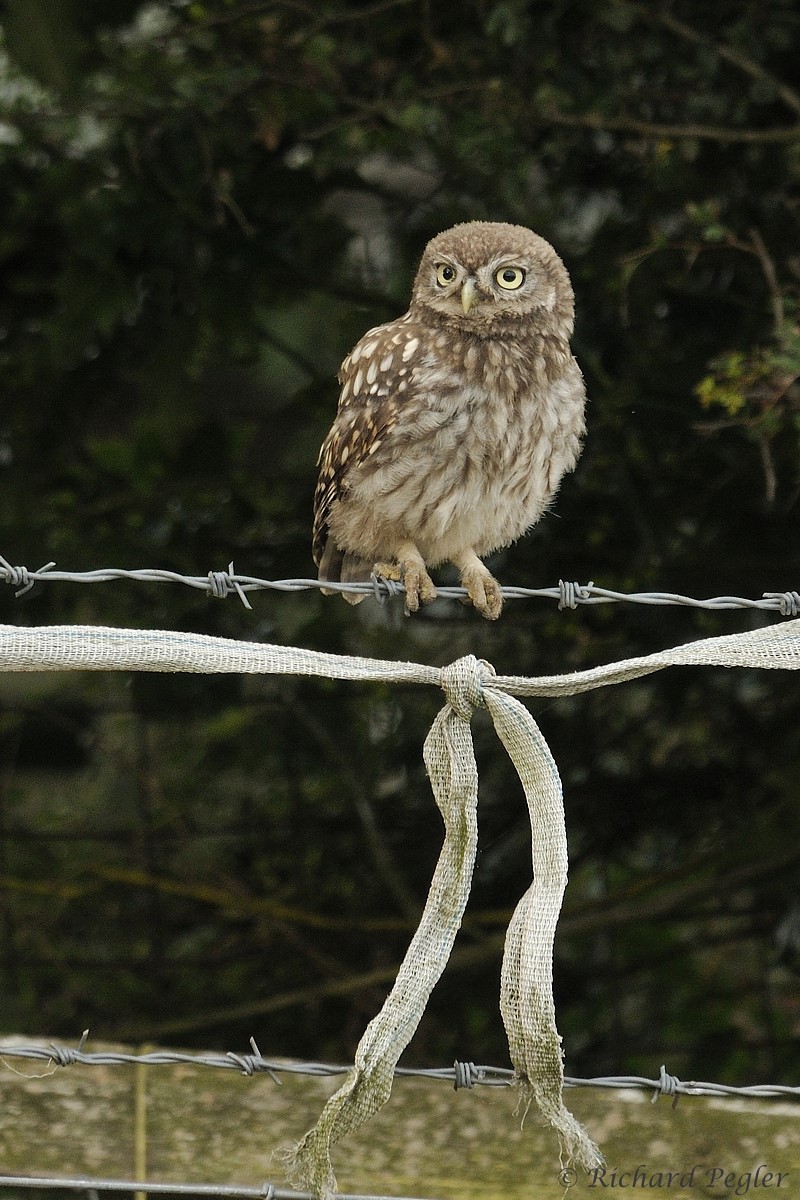 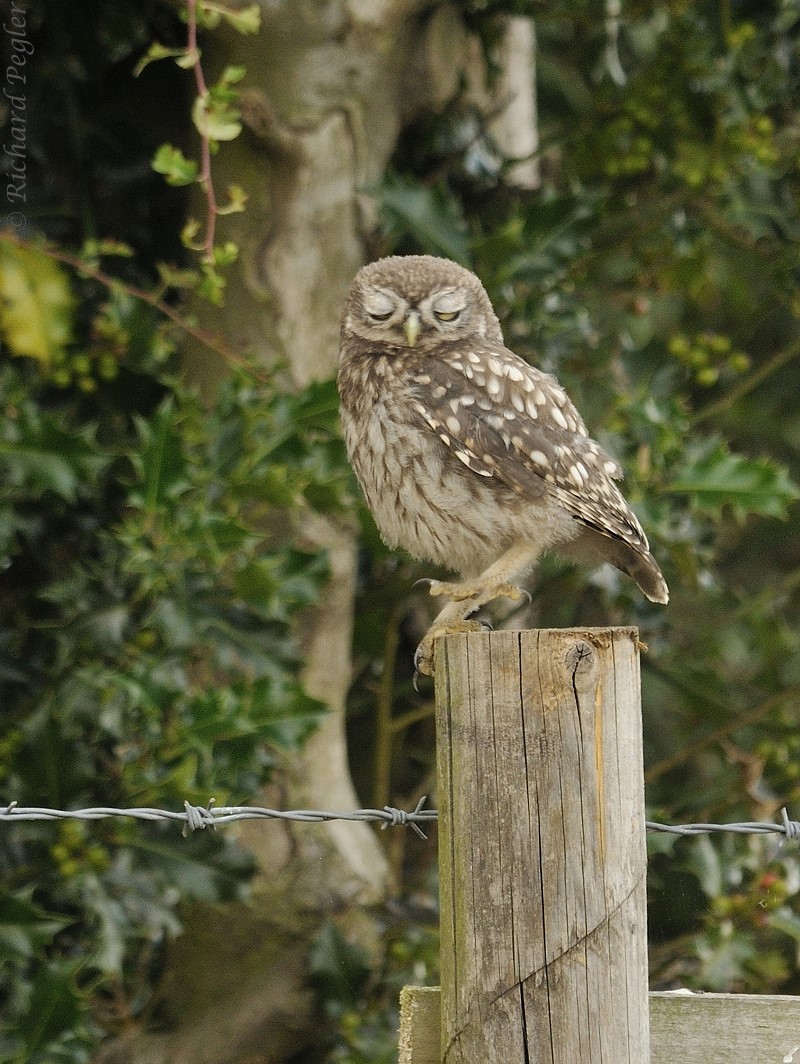 At an appropriate moment I packed up my hide and departed.

One thing that this session brought home to me was that, although I usually don't get too bad results with a handheld camera if I take a lot, and discard the majority, I do much better if I'm in my hide and using a tripod. I just wish I had more opportunities to use the hide.

Thursday 31st July was quite an owly afternoon, out with pal Titus. It started off quite slowly, and without any useful images. However, on the way out, we'd briefly observed a juvenile Barn Owl (Tyto alba) in a tree that we'd previously seen an adult owl delivering prey to. As we passed in the car, it disappeared into the nest hole (which was well concealed, and we'd not previously located). On our return journey, I'm sure that we'd have missed the owls if we'd not known where to look. Here's a very heavily cropped image to give you an impression of how they were hidden.

Moving a little further down the road, I managed a slightly clearer image, but they quickly disappeared into the nest hole. It's gratifying to know that these were exhibiting a good sense of self-preservation.

Further on in our travels we found two juvenile Little Owls which we are reasonably confident are dispersed juveniles from my LO Site No.41. I only managed images of one of them. 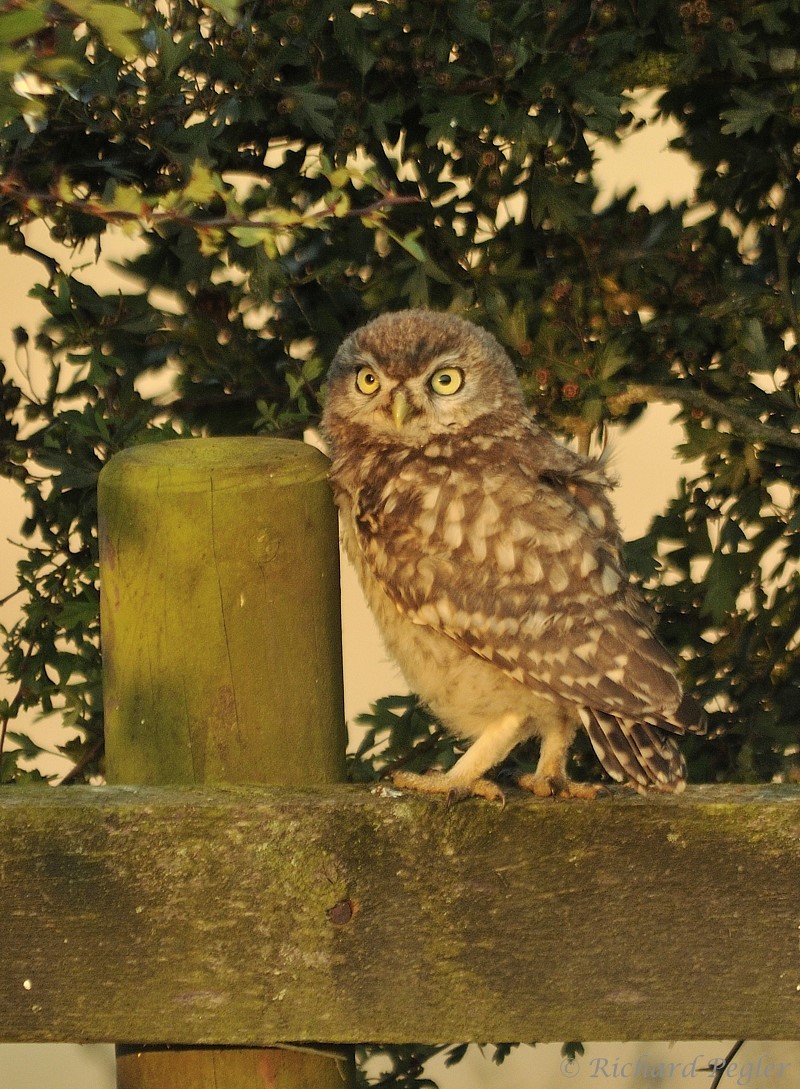 That's it for this post. Thank you for dropping by.

With luck my next post will be on my garden wildlife, including two garden 'lifers', one of which is a bit of a rarity for Leicestershire!
Posted by Richard Pegler at 12:26 28 comments: