For various reasons, I've done virtually no birdwatching for the past couple of weeks, other than observe the birds in my garden during foul weather. However, I thought I'd better do a blog post, just 'to keep the pot boiling'. So here goes -

Approximately 1 mile (1.5 km) from my home is the site of the old Oakthorpe Colliery. This has been transformed into something of a wildlife haven, although I was concerned recently that people were shooting next to the car park. Up until very recently there have been bird feeding stations at each end of the car park. However, I found when I visited on 16th January that the station at the north end of the car park had been dismantled and a new station installed only a few metres from the station in the south-west corner of the car park. I'm not sure of the reason for this move, but it seems to have had an effect on what species are visiting the feeders.

I had to bide my time for a while in a rather awkward position for photography as a car had parked right beside the new feeding station and the occupants gone off for a walk. After about an hour they returned and departed in their car and I was able to move my car, which I used as a hide, into a more favourable position.

In its previous position, the feeding station used to regularly attract Jay, Great Spotted Woodpecker,  Nuthatch, and the occasional Willow Tit (a bit scarce in these parts these days). However, on this occasion, the first three of these species only made nervous approaches without stopping to feed, and Willow Tit was not seen at all. Hopefully this will change when the birds get used to the new set-up.

It was good to see a Yellowhammer approach the feeders, although it didn't stop to feed. This used to be a regular at this site in winter, although I hadn't seen one here for some time and wondered if they'd gone.

The weather and light were not great, but here are some images from that session. I hope you like Tits! 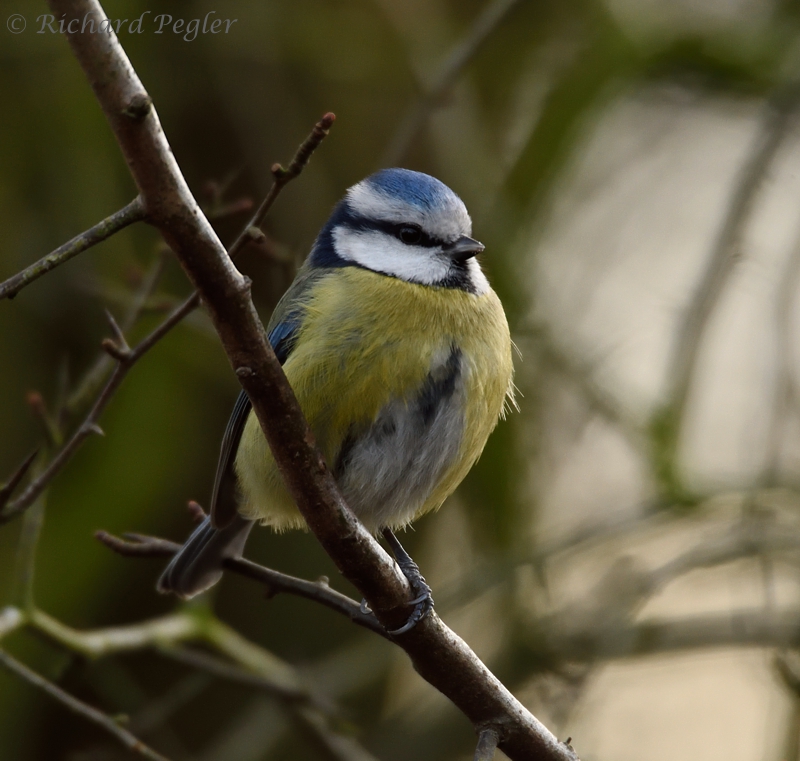 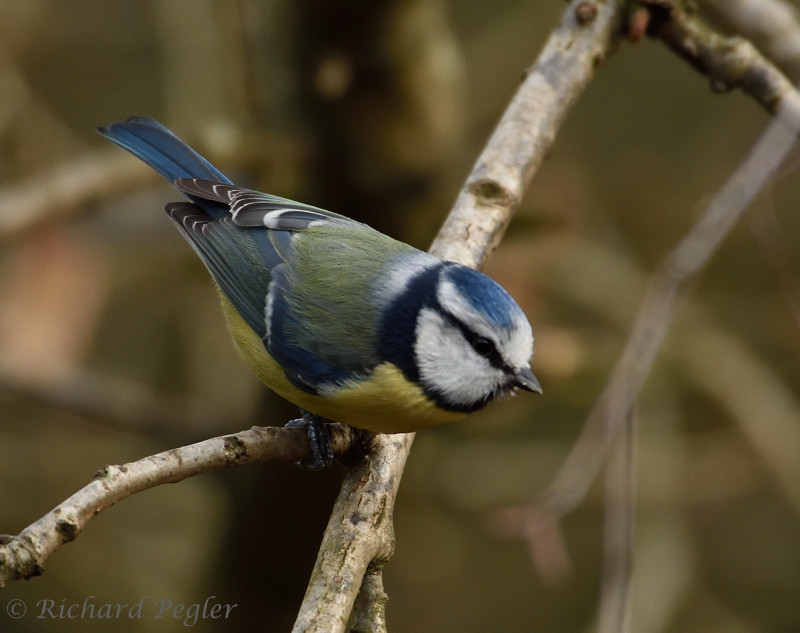 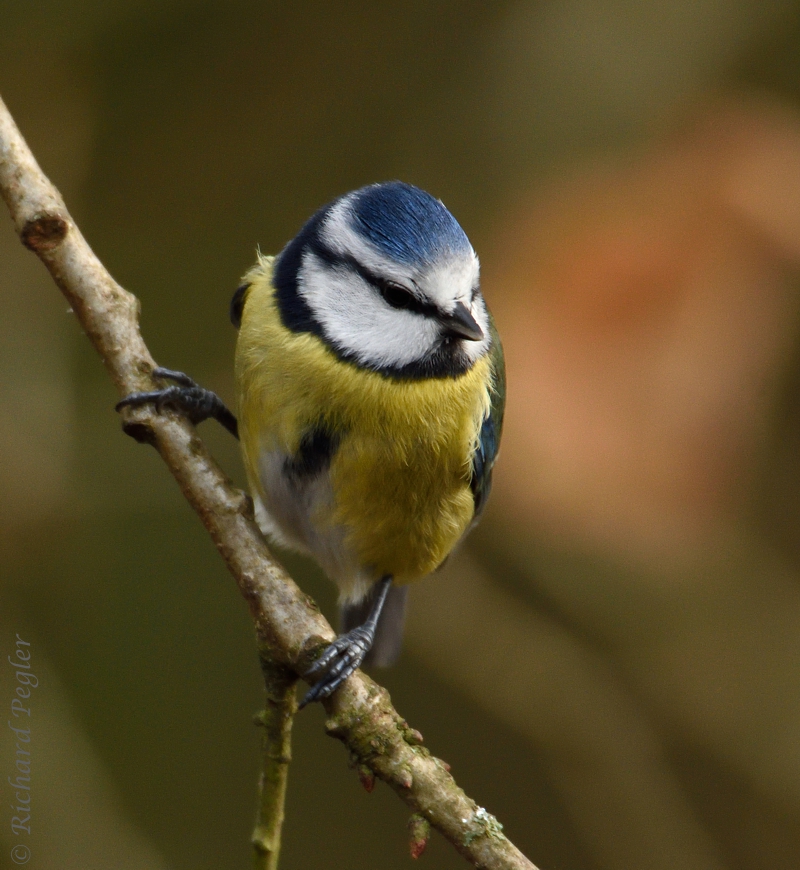 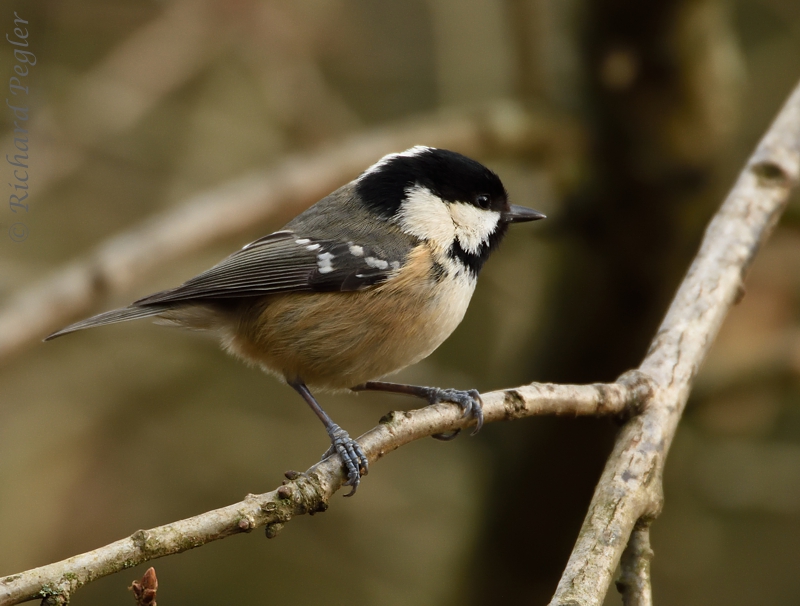 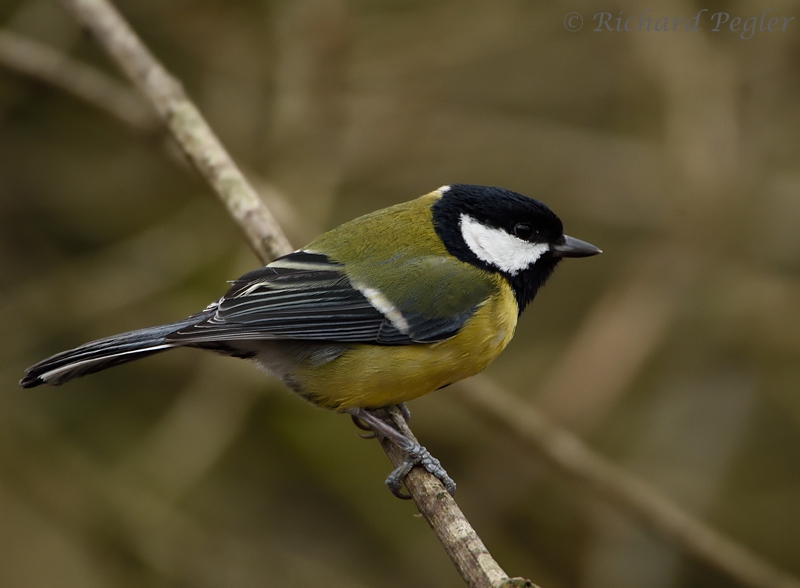 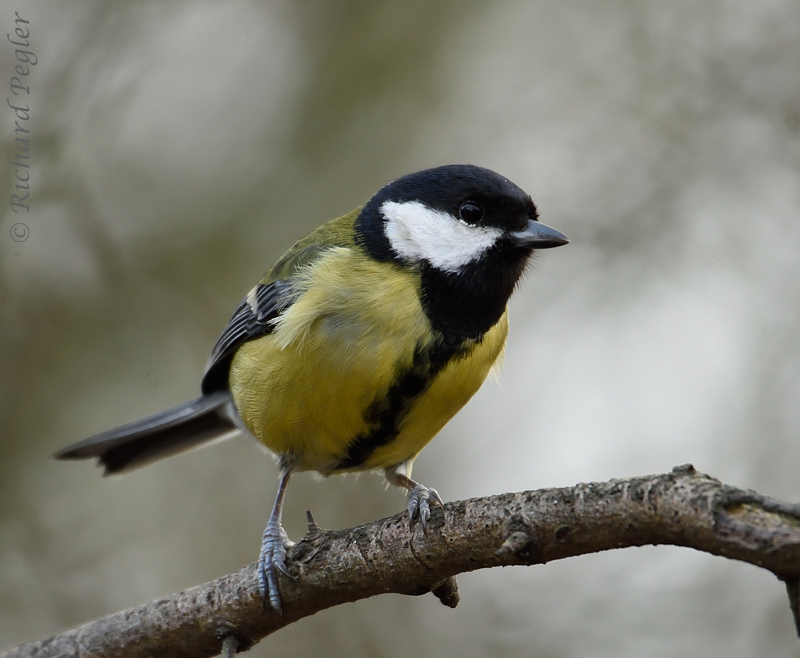 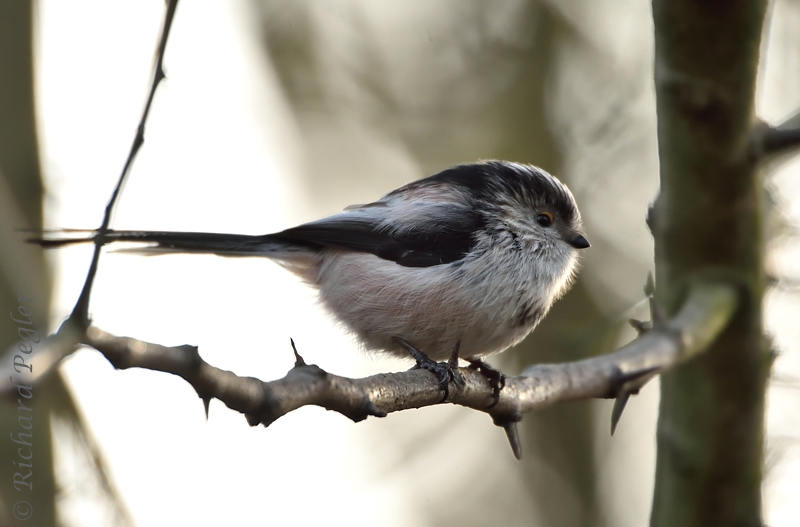 The Woodpecker stayed well-hidden. I think that it realised I was there!

Sadly, the Yellowhammer stayed distant and partly obscured by a branch, but I was pleased to get any sort of shot of this bird. 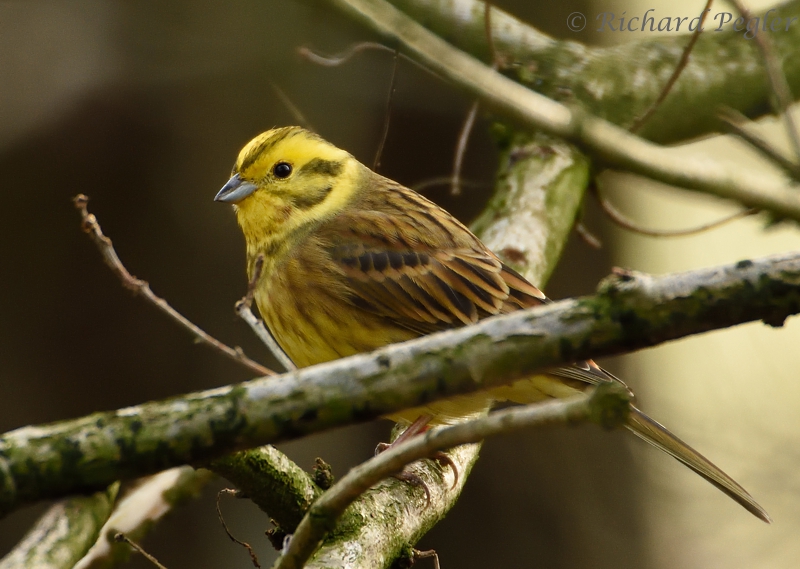 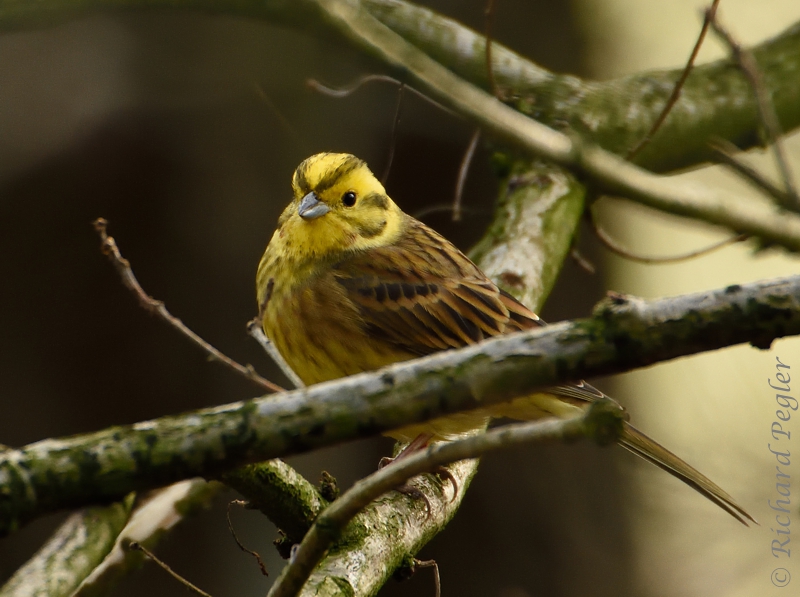 I know that some birders are not too fond of Grey Squirrels, but I consider them to be charming creatures - it's not their fault that someone decided to introduce them into UK! 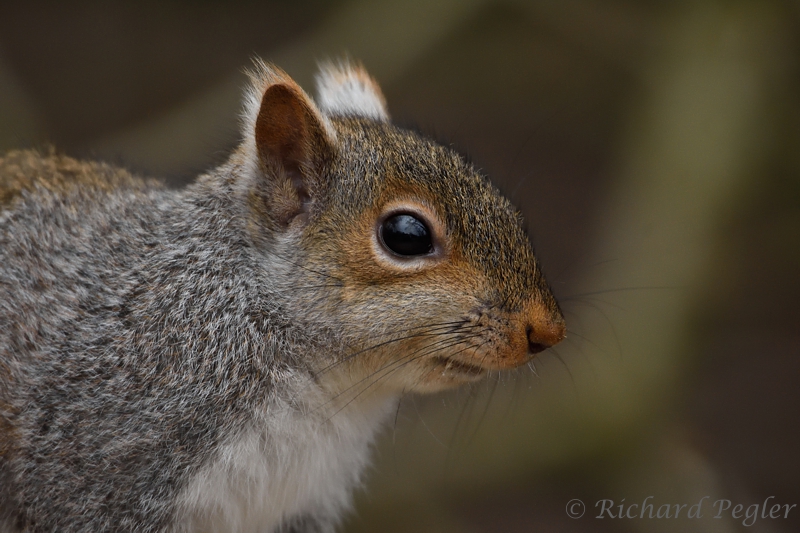 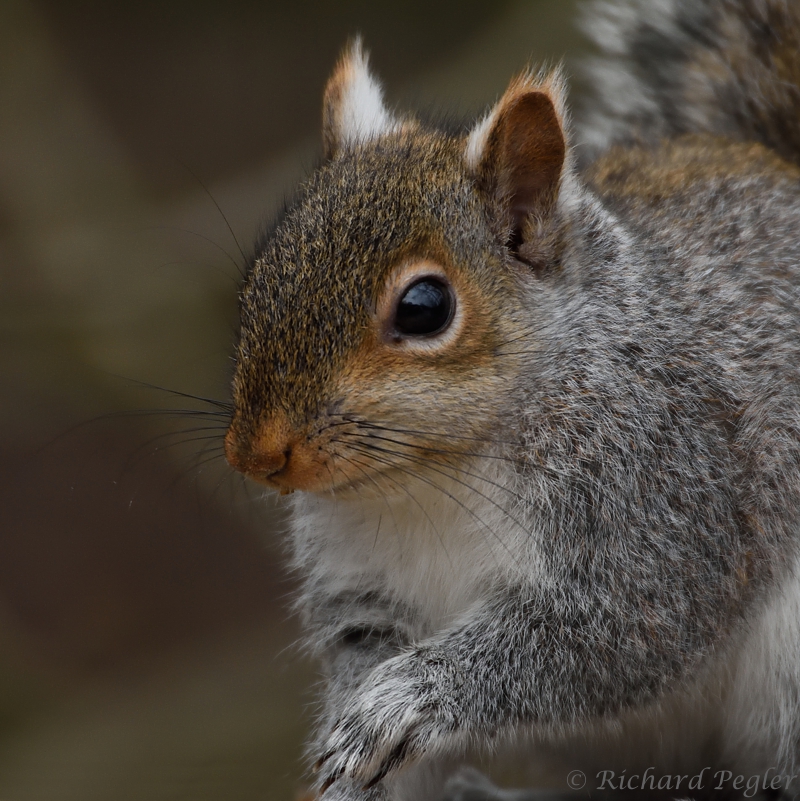 It was a quite interesting week in the garden, no doubt helped by the fall of snow we had. The total number of species setting foot down increased from the 22 of the previous two weeks and reached 24 species.

Jackdaw put in a brief appearance once again, and I just managed to spot a Redwing in our Rowan before it departed. A male Siskin has also been visiting on some days - I hope that he attracts a female!

The male Sparrowhawk has started making a nuisance of himself again. He's not catching much at all, but causing the birds to flee in panic, sometimes flying into the window glass. Usually I manage to rescue them, but I did have a male Chaffinch break its neck today.

In a few days time I shall be away in Scotland (a solo visit) for a week , so I am not sure what or when my next post will be.

For the first couple of weeks of this year, it seems that I've either had commitments or the weather has been on the grim side. I have, therefore, managed little in the way of photography. However, I feel I need to keep my hand in with blog posts, so stand by for some less-than-inspiring photography!

A visit to Kelham Bridge at the end of last year resulted in great company, but virtually nothing in the way of bird sightings and photography. The water was frozen over, and I'd been hoping for Water Rail to come out onto the ice. The nearest to 'exciting' was a distant Kestrel with a vole! 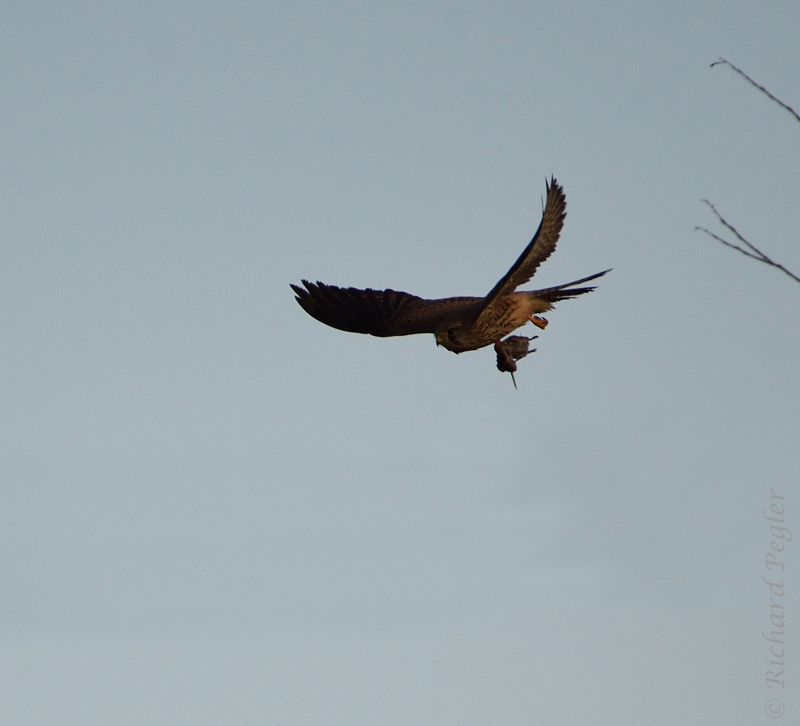 A visit to Oakthorpe Colliery later that day just resulted in the disturbance beside the car park, caused by four shooters with dogs, upsetting the people in the car park. This was reported to the police who, as soon as they were told that we weren't being threatened, weren't interested, in spite of this being a nature reserve and a police notice in the car park asking for reports of possible poachers with dogs!

We had quite a good day in our garden that day, with 19 species visiting us, including the two Redpoll which featured in my previous post which you can find here. However, on this day, which was very dull and wet, I only photographed our visiting Woody.

We were lucky this day to have one of the rare visits to our garden by a Brambling - sadly I didn't manage any decent images. It was dull and extremely cold that day and I was struggling to keep the water from freezing so that the birds could drink - you can see some ice from the drinking station in a couple of the images below. 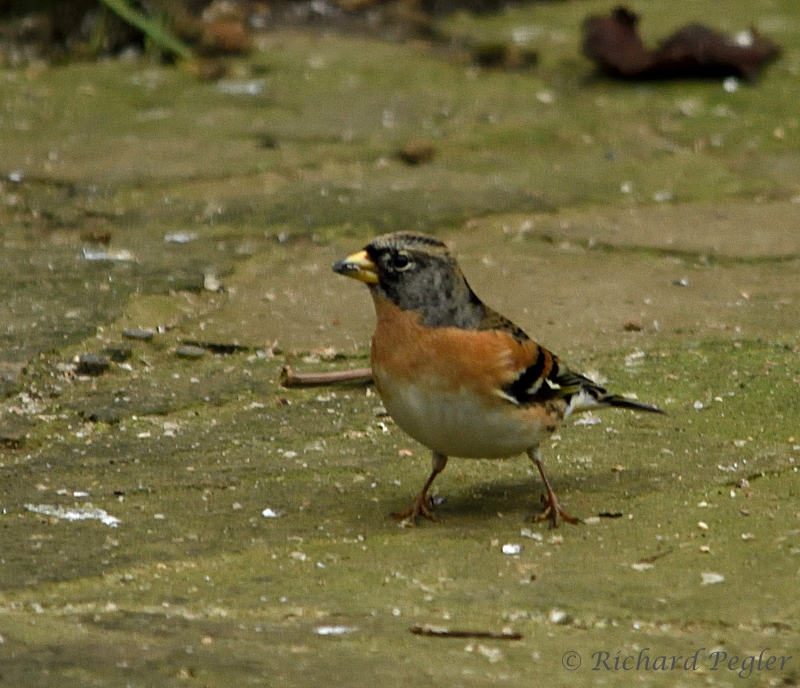 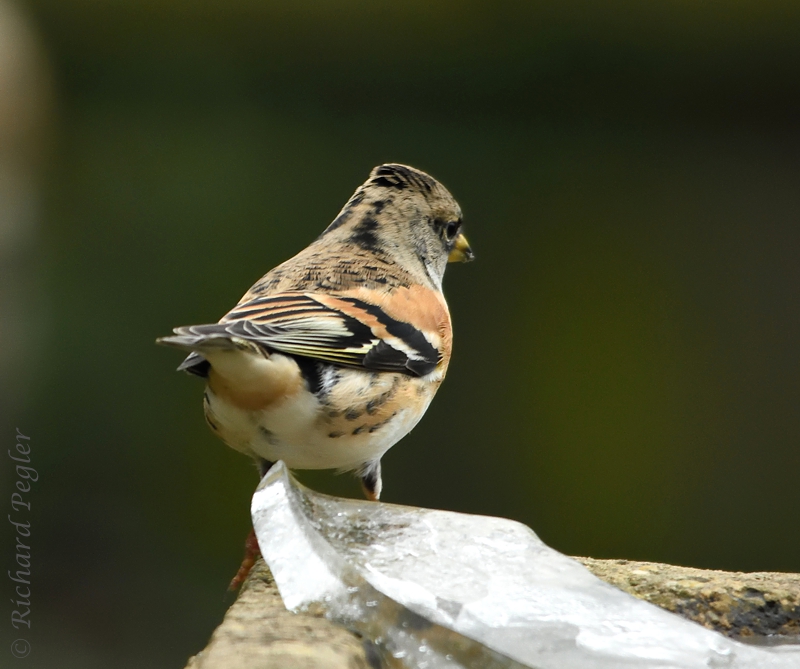 That evening I went out to see if I could find any owls. I nearly failed, but happened on a Barn Owl after it had already got dark.

Lindsay and I fancied going out for lunch together, and Lindsay chose Launde Abbey as our lunch venue. This suited me just fine as we'd pass some of my Little Owl sites en-route. Unfortunately we were soon travelling in thick fog! We didn't stand a chance at the first few sites we passed as we'd not have seen a bird if it had sat there and shouted at us! However, we were able to see a bird at my Site No. 23. It was still quite foggy and my images were extremely flat and grey. However, I have found by past experience that images in foggy conditions are relatively easy to enhance, purely by winding up the contrast compensation in post-processing. Although not a good image, the following is considerably better than the original!

Lunch was very enjoyable and the fog lifted as we were eating. This prompted us to take a scenic route home. A little Owl was seen at my Site No.53 - almost 100 metres away!

By the time we got to LO Site No. 37 the light was dreadful and the owl was in a hopeless position for photography. However, it did mean that I'd had my first 3 Little Owl day for many months! - and that is why I'm happy to post these rubbish images!

I mentioned in my previous post that I was concerned that we'd seen a Hedgehog out at the beginning of the month, and that I'd monitor the situation. The header that is current with this post is a screen grab from one of my trail cameras on 4th January. Until 13th January there was no further sign of a Hedgehog. However, on the night of 13th January, the Hedgehog reappeared. I'm not overly concerned at this stage as Hedgehogs will occasionally awaken in the winter, particularly if they feel the need to change sleeping location. I am continuing to closely monitor the situation. If you are knowledgeable on the subject of Hedgehogs and think, for example, that this one looks underweight and needs help, please let me know.

We had another quite good week in the garden, in spite of the continued building works out back.

It was a different mix than the previous week. Brambling showed for the first time this year - they usually appear a bit later in the winter. However, the real surprise was a couple of corvids. Although they are not rare birds, Carrion Crow and Jackdaw are quite rare in our garden, and we consider ourselves lucky if we get one in the year, so to get both this early in the year, and on the same day, was exciting. Sadly I missed getting any photos.

I am pleased to say that the pair of Redpoll is still visiting the garden.

At the current rate of progress I, once again, have no idea what the subject of my next post will be. Hopefully I will not have to scrape the bottom of the barrel too hard! 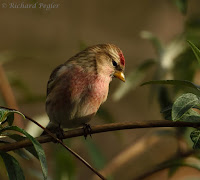 For a number of years now, we've been fortunate enough to have Lesser Redpolls visiting our garden each winter. Their numbers vary considerably, with small flocks of 8 birds being recorded several times.

I was concerned that this winter we might not be so lucky due to the noisy building work going on adjacent to our garden. I was, therefore, delighted when the first of these birds of this winter appeared on December 27th. The situation was probably helped by building work being on hold for the Christmas period from 22nd December to 3rd January.

From 30th December we were getting a pair of these delightful small birds visiting us on a daily basis, and they are still with us as I write this. I have not yet managed to get any shots that I'm fully satisfied with, and the female is proving to be less obliging than the male. Here, however, are a few that I've managed to grab so far. 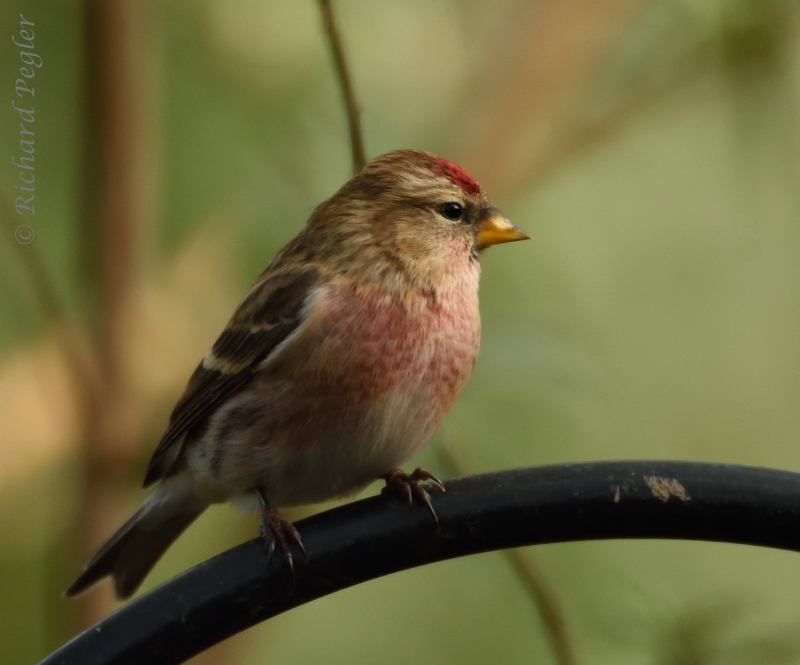 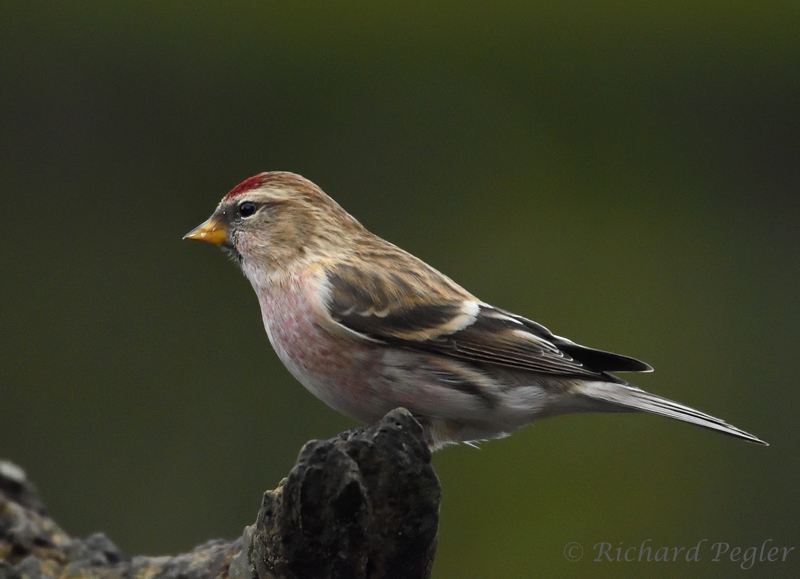 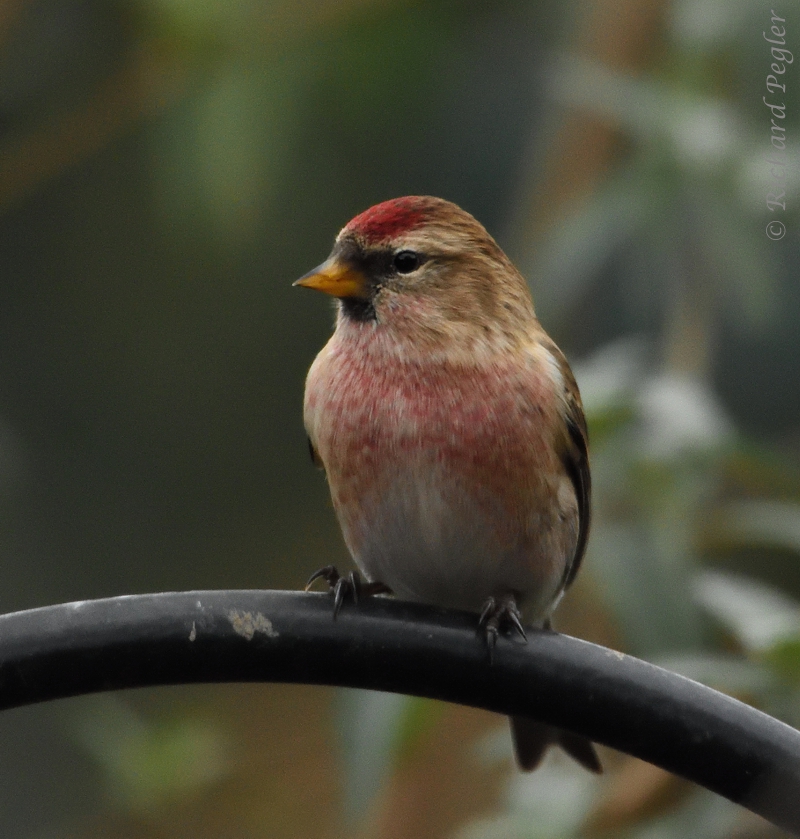 I'm now hoping to get some better images, and also hoping that the number visiting us increases. The weather, however, has not been playing ball of late.

For a number of years now, I've been keeping a daily record of the birds that set foot in our garden. In the past, I've shown a table in the right-hand column of this blog, showing the species that arrive in our garden for a particular year, the date they first arrived, and the maximum number seen at any one time. This fell into disuse last year so this year I intend to append, on a regular basis, a copy of the table I produce each week that summarises the garden sightings. Whether or not I keep this up remains to be seen! Week 01 of 2018, has been quite a good one for us from the point of view of variety of species arriving.

We do have some consternation at having seen a Hedgehog on two consecutive nights - it should be tucked away for the winter. I am continuing to monitor that situation, with two trail cameras set up for night operation.

Thank you for dropping by. I have done little photography of late, with my main lens being away at Sigma for repair. My substitute lens is more of a handicap than I remembered! I have, therefore, no idea at all as to what the subject of my next post will be!
Posted by Richard Pegler at 19:26 27 comments: