With a rather poor run of health this summer, what 'wild time' I have managed has been mainly focused on dragonflies and butterflies. With the season drawing to a close, it was always on  the cards that my birding interest would be revitalised, and so it was that, on this day, I headed to Rutland Water for a spot of birding.

For technical reasons (mainly concerning a Nuthatch in the garden!), I didn't get away from home until just after 10 a.m., so arrived at the car park on the Egleton side at just before mid-day. Having wolfed down my picnic, I headed into the visitor centre to check for any news.

A Spoonbill was visible from the visitor centre, but it was rather distant, and asleep with its head tucked in, so I didn't wait around, particularly as a message had come in via the WhatsApp group to say that a possible Ring-necked Duck had been seen on Lagoon 3, so I set off in that direction.

The possible Ring-necked Duck became a confirmed Lesser Scaup as I made my way to Lagoon 3. However, I did get briefly distracted by some dragonflies, one of which is perplexing me to this day as I only had a very brief glimpse and it looked like a small hawker but seemed to have a bright completely powder-blue abdomen! I've since come to the conclusion that, unless this was an extremely unusual aberrant, I was seeing things! Here's one dragonfly I did see.

Near to that particular darter was a caterpillar which I believe to be that of one of the Tiger moth species. Any help with ID would be appreciated.

I made my first stop at Shoveler hide, expecting to find it full as the car park had been full, with the overflow car park in operation. However, there was only one person in there when I arrived, and he was totally unaware of the potential excitement.

There was little of interest at close quarters, with any ducks being at too great a distance to sort a lone Lesser Scaup from the rest of a raft of Tufted Ducks! I took a shot of a Great White Egret over on the far side of the lagoon, which Google Earth tells me was nearly 400 metres away, and an Egyptian Goose, which was somewhat nearer.


We were soon joined by a third person. With little happening, and my two companions chatting away, totally unaware of what might be going on outside the hide, I decided to depart and head round the corner to Buzzard Hide to look at Lagoon 3 from a different angle. Here I found a gentleman with a scope, already well settled in, and who had not yet found the Lesser Scaup. I stayed for a while during which time the gentleman located the bird for a second or two before losing it again. It subsequently transpired that it had departed to the North Arm of Rutland Water.

I had a quick look in at Smew hide, and found myself looking straight into the sun, with not much close in except a female Shoveler, and the photos were grim!

I next moved on the short distance to Crake Hide, which gives onto a corner of South Arm III, and here I stayed for the next two hours as the action was virtually non-stop!

Shortly after my arrival at Crake Hide, a Great White Egret flew in and landed by the far bank. It only stopped briefly, and by the time I'd checked my camera settings (they weren't good!) and looked up again it had departed. A Grey Heron also made a brief appearance.

There were a few Great Crested Grebe, in varying states of plumage, out on the water in front of the hide, and to the right of the hide. 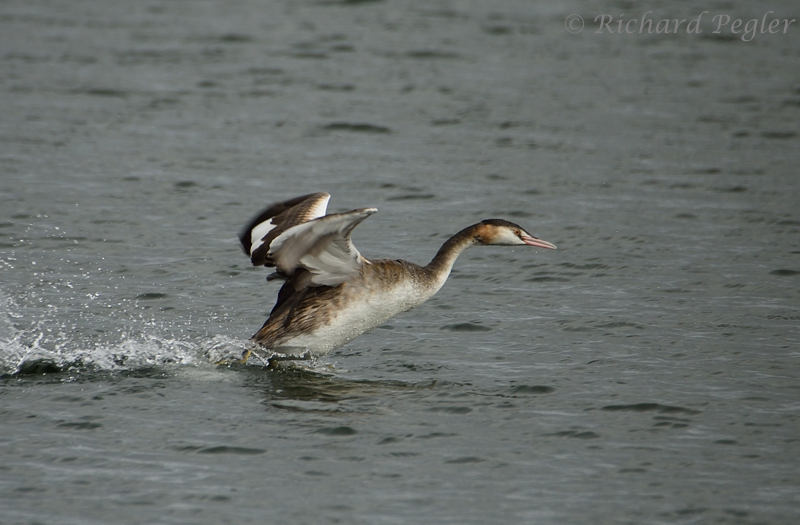 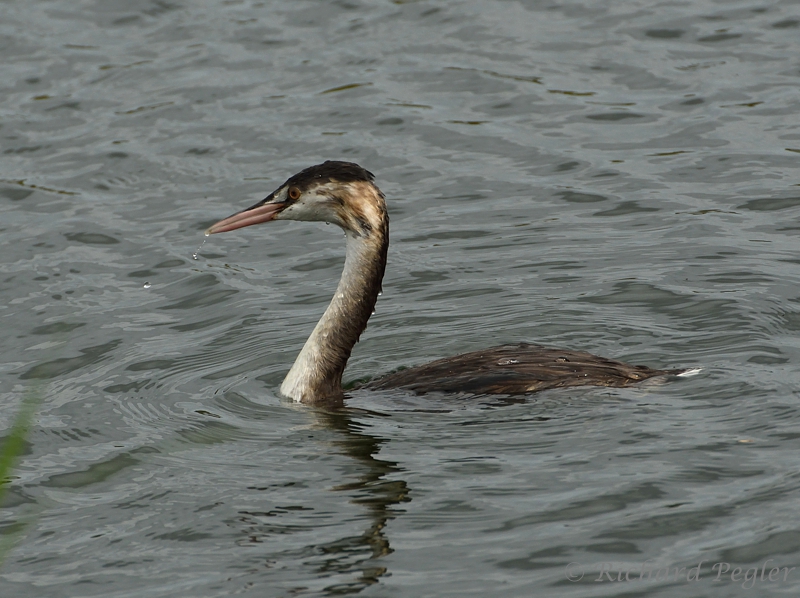 Black-headed Gulls were making a nuisance of themselves, trying to steal fish from the Cormorants.

An immature male Teal had me scratching my head ID-wise for a while.

Twice, a Marsh Harrier passed by - possibly the same individual. 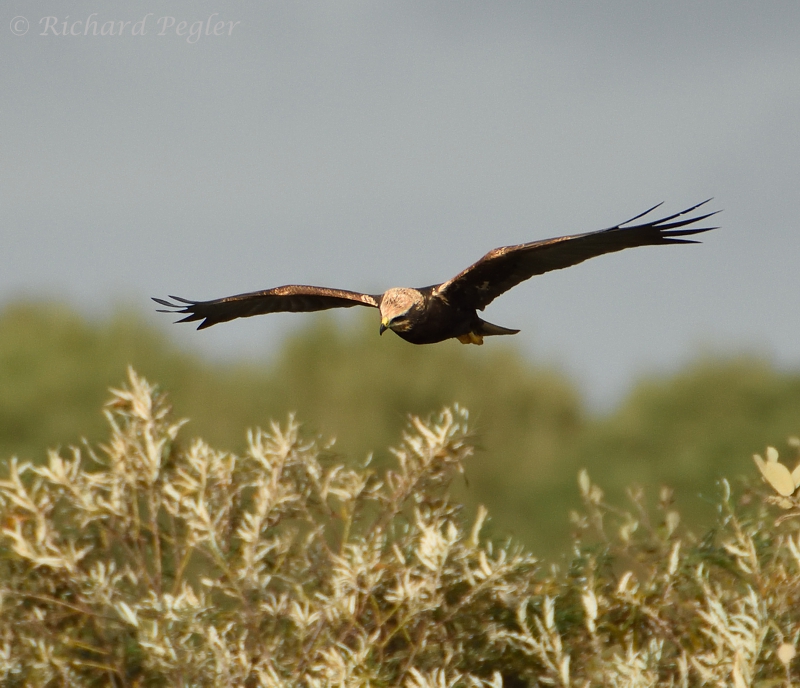 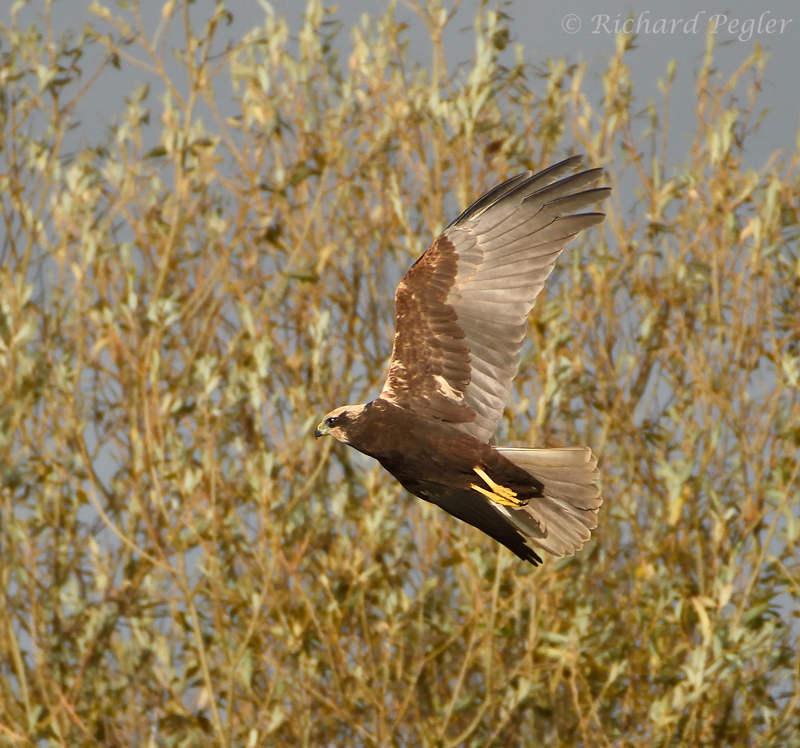 The real stars of the show were, however, the Little Grebes, Cormorants, and Little Egrets.

At first, two Little Grebes were fishing in a shaded area to the right of the hide, mainly obscured by vegetation. I did manage to get one shot of one of them in the open with a good-sized fish - I'm rather pleased by the effect of the light on the water in this shot. 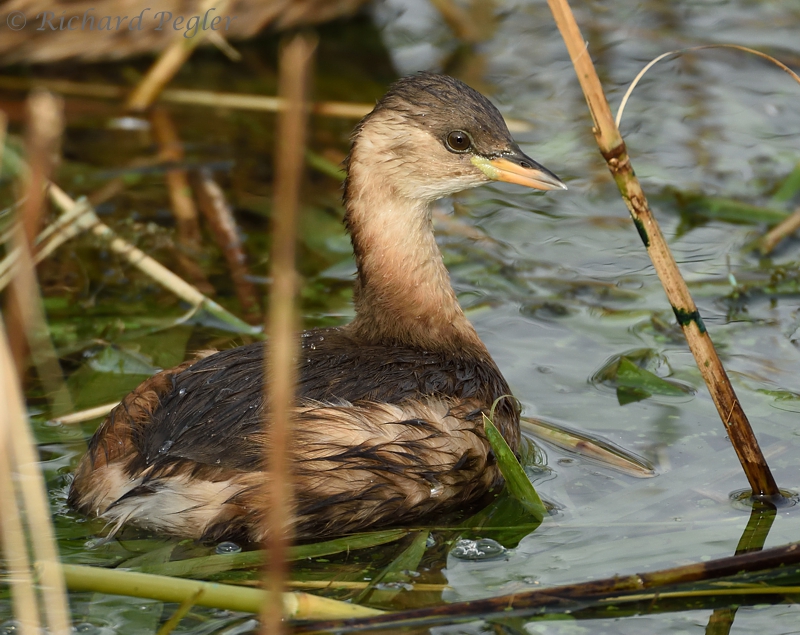 At one point, one of the grebes managed to come up from a dive with a dead and decaying fish. I think the second image, below, shows its look of disgust after dropping the corpse back into the water! 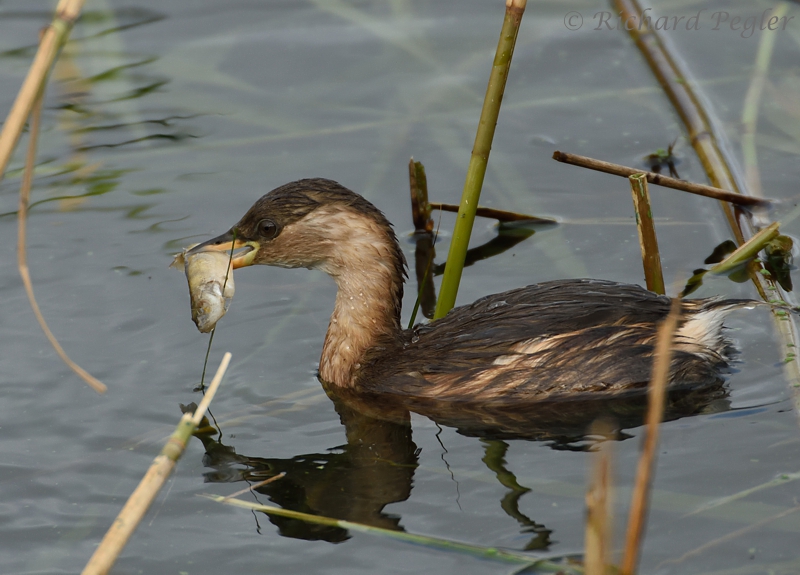 The Cormorants were very active and mainly fishing in the water beyond the reeds in front of the hide, and they were very vocal, with noisy squabbles over fish catches. 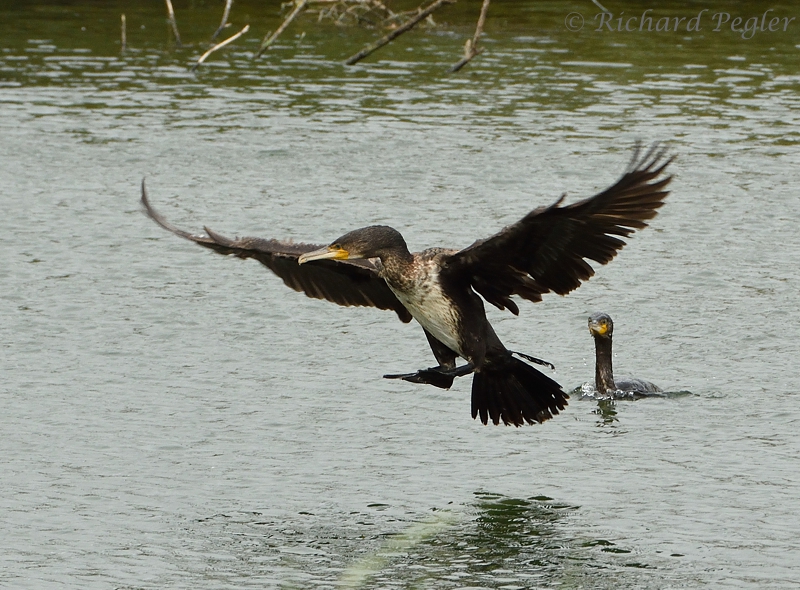 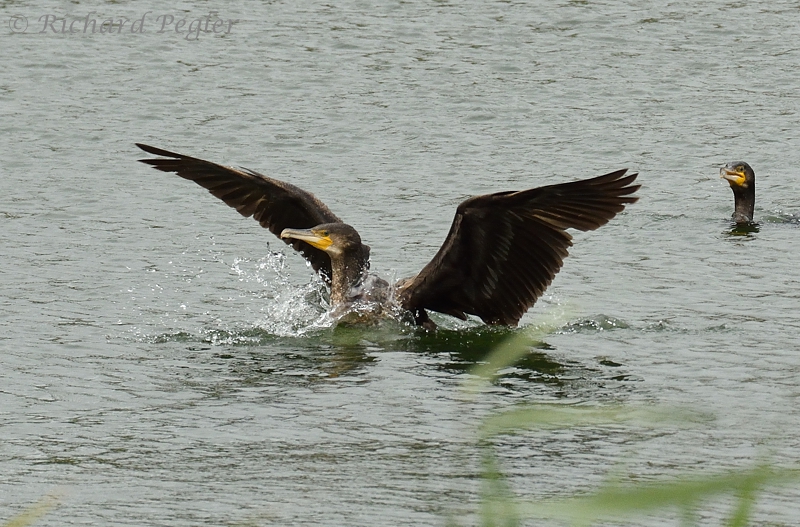 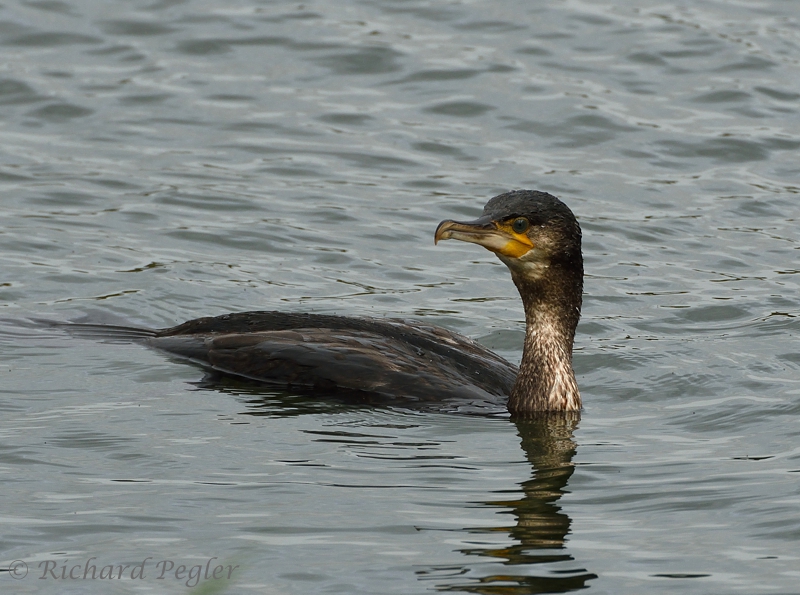 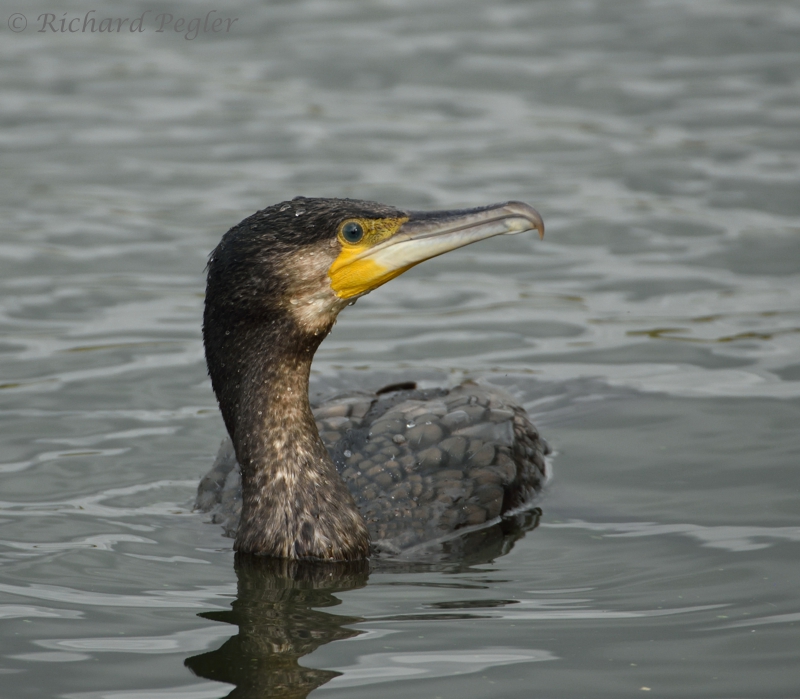 Occasionally a Cormorant would swim underwater through the reeds (detectable by bubbles) and end up right in front of the hide. They seemed to be very successful in fishing in this area but I failed to get a shot of one with a fish. 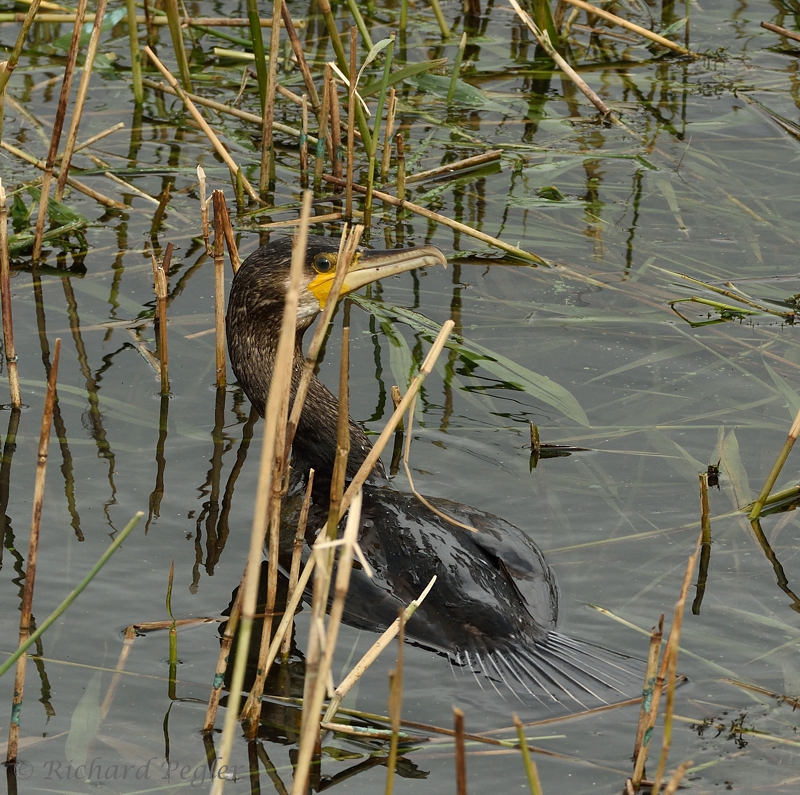 For me, it was the Little Egrets that really stole the show, however. When I first arrived, they were starting to gather on the far shore. 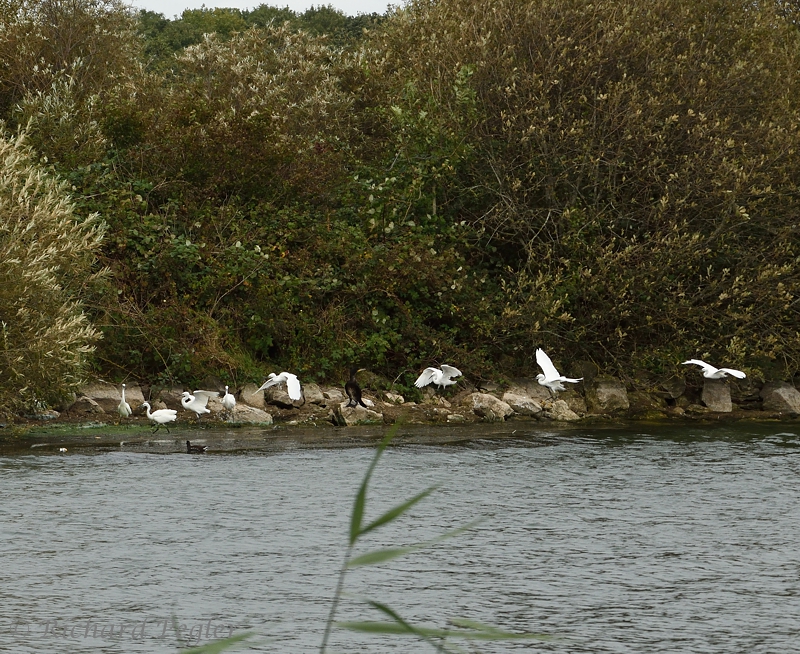 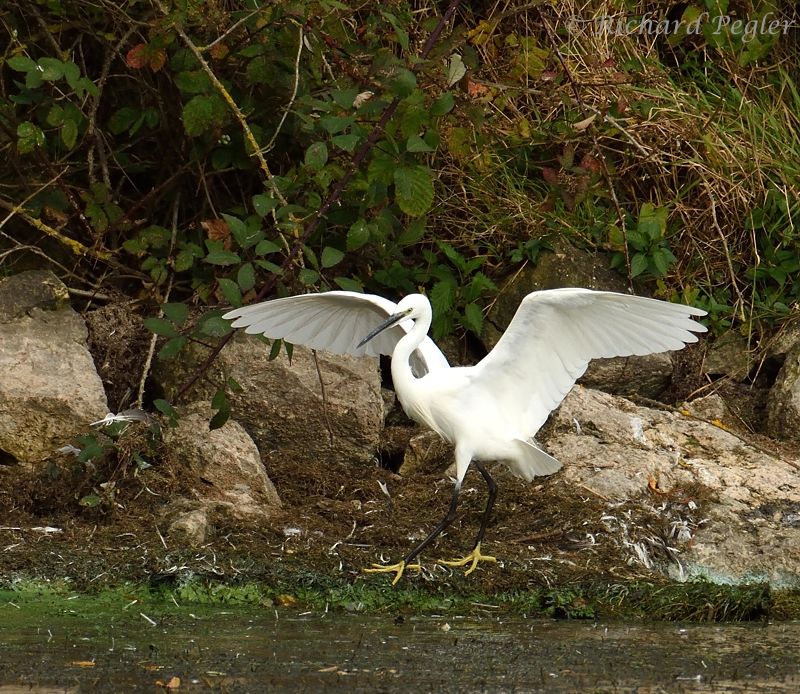 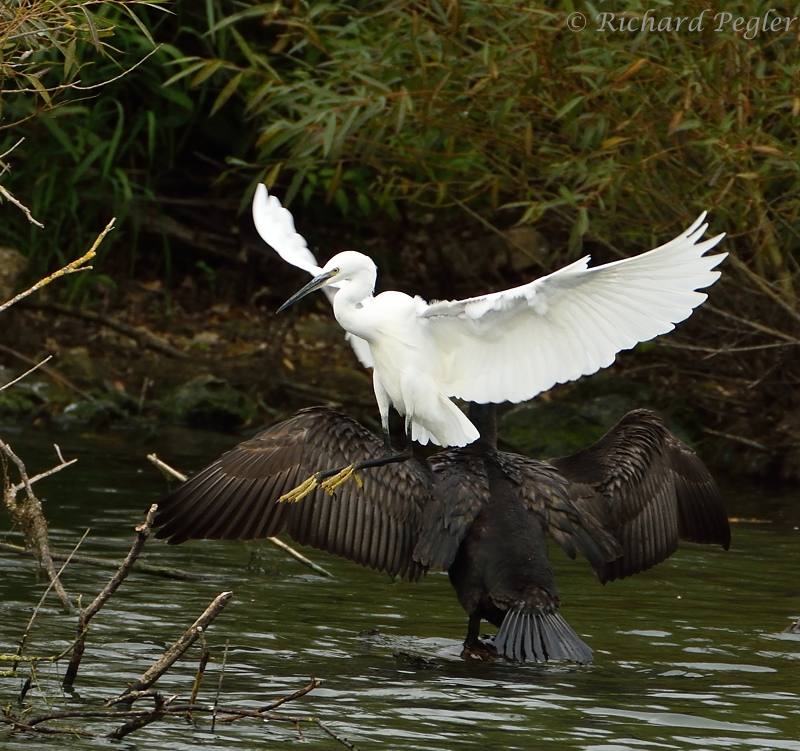 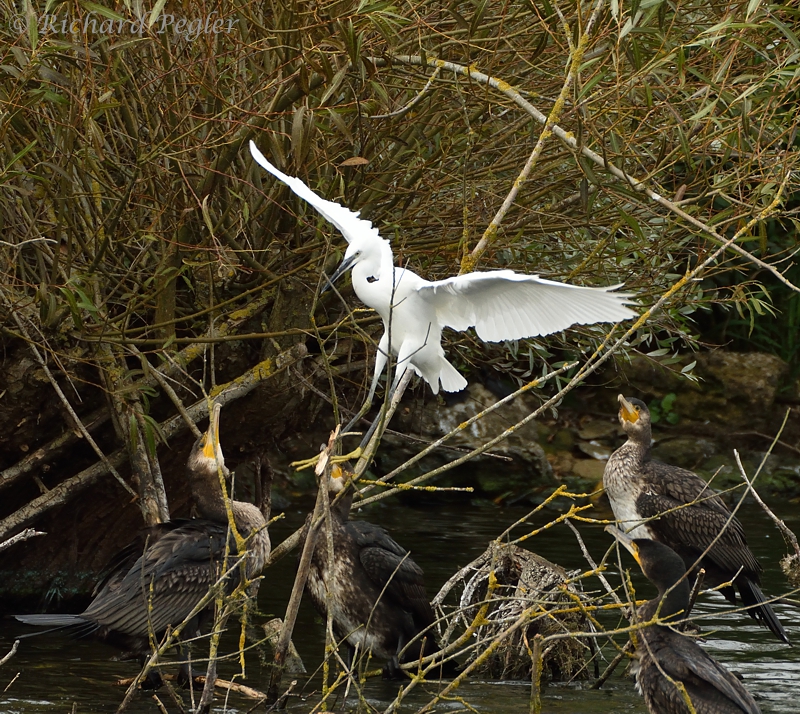 After a while, they started to disperse to other roost points. The first was to the right of the hide, and totally hidden behind a Willow.


The second roost was to the left of the hide, and out of sight behind tall reeds. They then started to come in to a third roost - immediately in front of the hide! As they arrived, and dropped down, probably only 3 or 4 metres in front of the hide, they spotted me sitting in the hide and departed again. I then employed the tactic of sitting well back and peering round the edge of the closed shutter to the left of my open one. 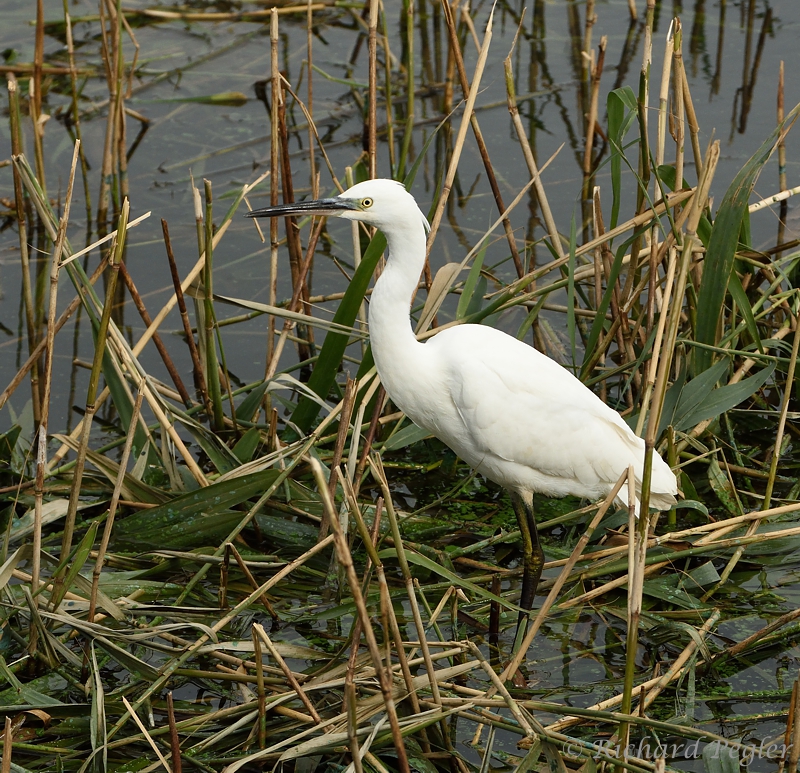 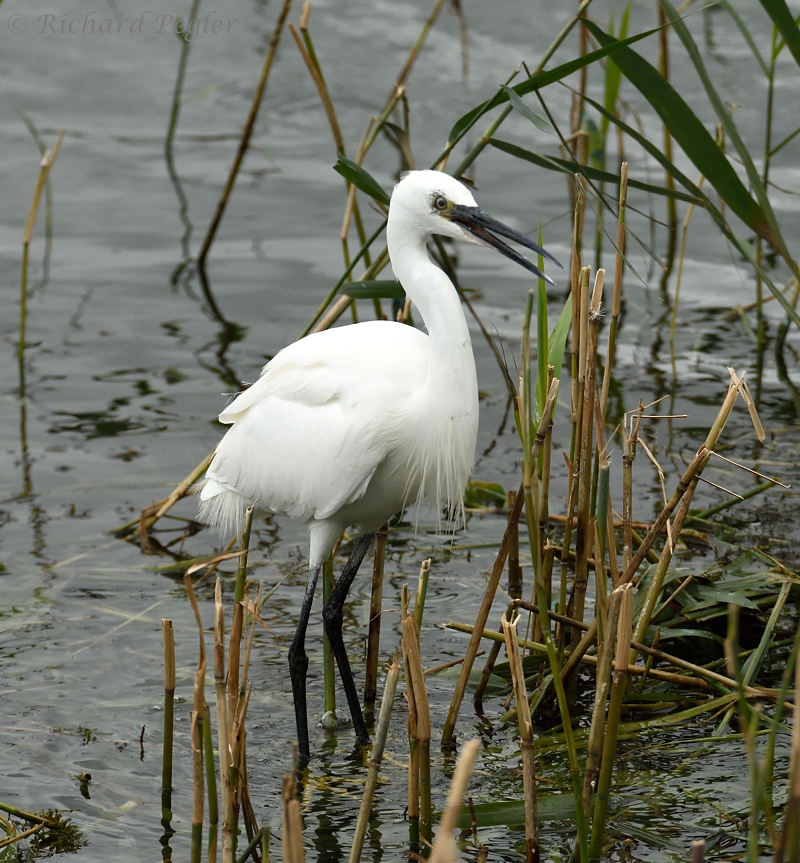 All was going rather well, until the lady who was one of the two I'd left behind at Shoveler Hide arrived and started opening the rest of the shutters in the hide. I explained the situation to her and how, with care, she'd see some great bird action. Sadly, she paid little heed and opened the shutter that I'd been hiding behind and came to sit beside me. It didn't help that she kept leaning out of the hide window and peering around, and also felt the need to chatter. It was soon time for me to depart!

Although nothing of great rarity was seen, it had been a very rewarding, and entertaining afternoon at Rutland Water, with even more bird action than I usually see there.


I'm sorry to say that my health had been improving to such a great extent that I got a little careless, and did something really stupid which seems to have set me back more than a little, so I have not managed to get out again since that day. Therefore, I'm not sure when my next blog post will be or what it will feature - watch this space.

My apologies (particularly to Diane with her slow internet connection!) for the length of this post. Thank you for dropping by. 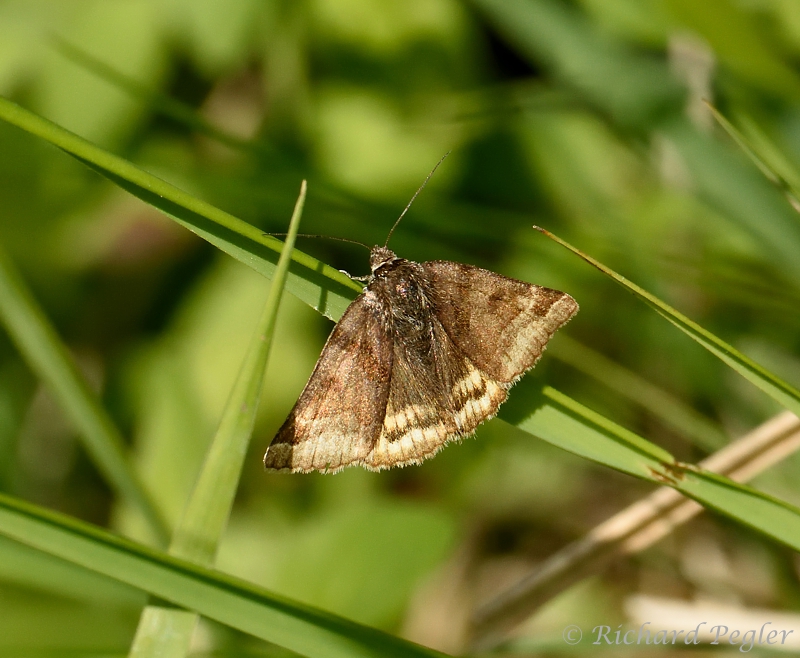 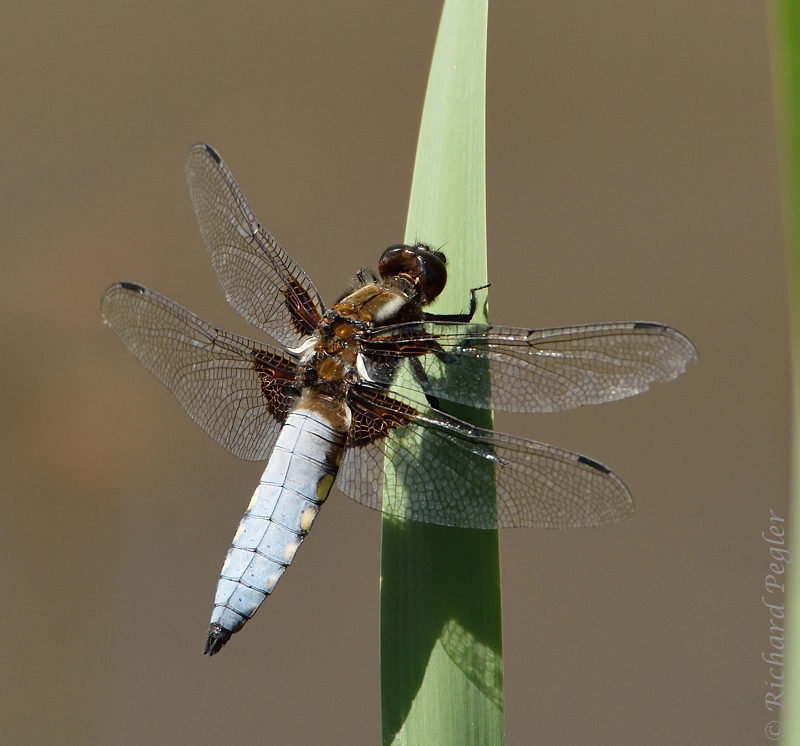 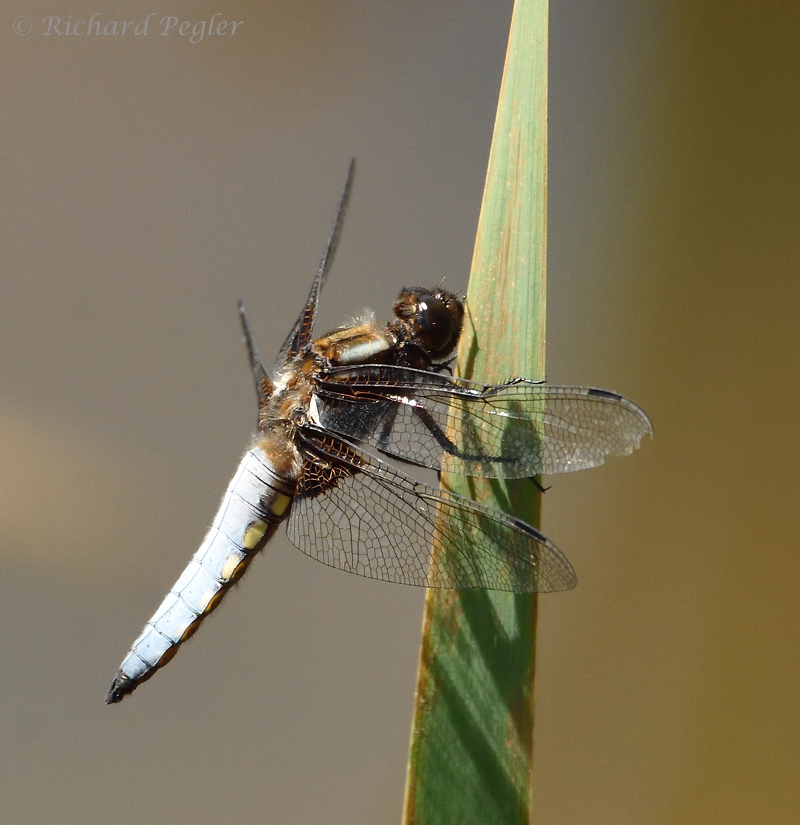 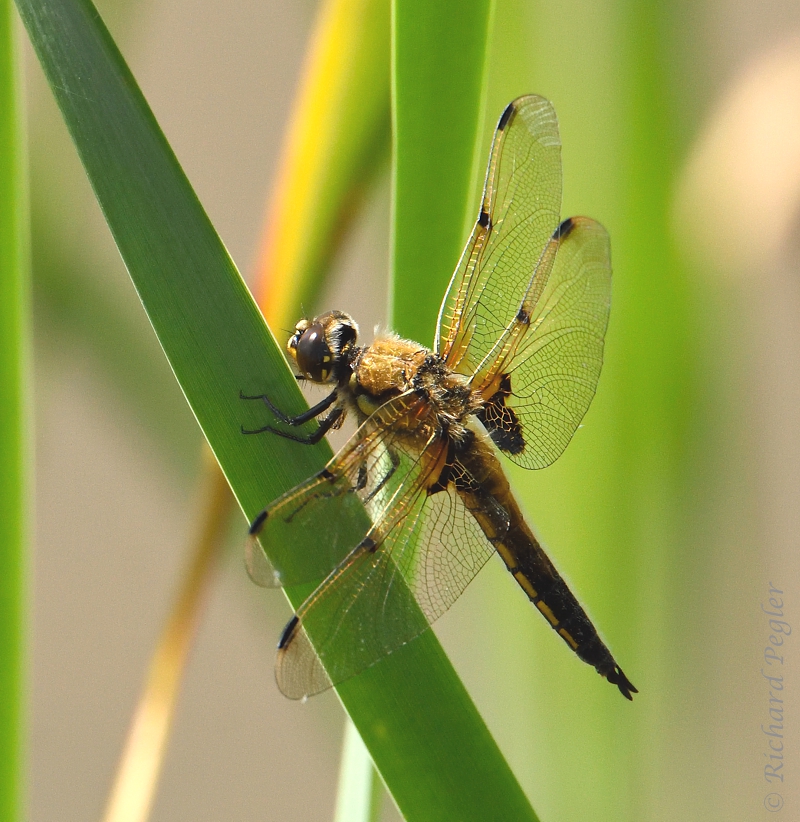