At the end of my last, rather lengthy, post to this blog, I promised that the next post would be much briefer and be about owls. My owling since then has been rather sparse, partly due to lack of effort in that direction on my part, and partly due to adverse weather. No effort required, therefore, to keep it brief!

My last owly post featured five years of my Little Owl Site No.02. At the back end of 2014, on December 28th, I was fortunate to find one of the owls at No.02 away from the usual building and in a nearby tree. 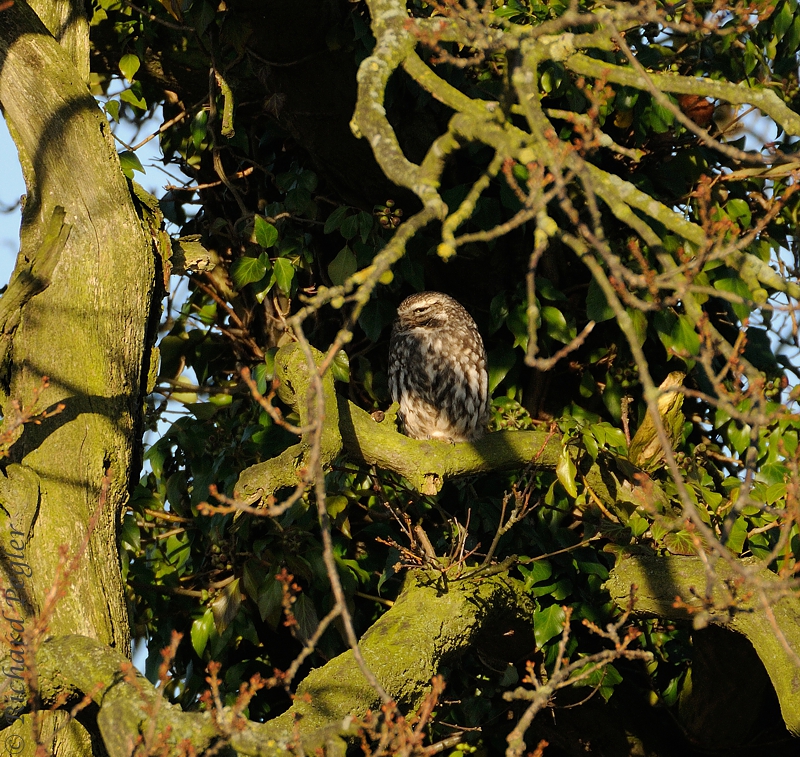 On 2nd January, both owls were out at my LO Site No.43. The jury is still out on the matter of whether this is a separate site to No.36, or whether it's a favoured roost for the birds from 36. I now think it's probably the latter, although No.34 is closer to No.43 than No.36 is!

On 13th January a Little Owl was out on my local patch at Site No.02 at one of its two most favoured locations. I've published many images of this spot, but I still can't resist showing another!

Three days later, again on my local patch, one of the owls was out in full sun at my LO Site No.30

One of my biggest disappointments in 2014 was losing the owls at my roadside LO Site No.44. Titus and I had come to the conclusion that the over-confident male had met with an accident, and the remaining female had eventually wandered off. The last sighting here had been on 28th August. We'd never given up on the site, passing at least once a week to check it out. It was, therefore, quite an emotional time for us both when, on 12th February, we found an owl in the old nest tree. We don't know whether this was the remaining owl returning to check out its old haunt, or a totally new bird. We'll keep an eye on things, but on a strictly 'minimum disturbance' basis - we will not jeopardise re-settlement of the site - so our visits will be reduced to 'an occasional drive-past' basis.

This isn't the best of images, but for me it's the most exciting!

There was further excitement later that same day when, whilst we were on our way home, a Barn Owl flew along the road towards us. Sadly no photos were obtained. This was my first Barn Owl sighting of the year!

I'll finish off with an image from a trip out with Titus a couple of days ago, on 18th February. It's comparatively rare to find both owls out in the nest tree at my LO Site No.34. They're usually in the nest hole itself, or on a fence post at the edge of the field. So it was good to see the pair out, even if they didn't present themselves well for photography.

That's all for now. The next post will probably be a non-owl, non-garden update, with a clue to some of the content in the header that is current with this post.

Thank you for dropping by.
Posted by Richard Pegler at 10:45 21 comments:

It's been a relatively interesting winter in the garden so far, and I've spent more time observing it than I would probably have done in normal circumstances. Only counting birds that actually put a foot down in our garden ('flyovers' don't count) we've already hosted 26 species in 2015, and had a peak count of 23 species in one day. I have, therefore, quite a lot of images to post - which will make up for the recent dearth of images and posts from me over that period! Some of the images will appear because I'm reasonably pleased with them, others are there just to help tell the story, and a few will be record shots of birds that I'm just plain delighted to see, and hope will give me better views for a future post!

All the images were taken through the glass of our house windows on the days nominated.


A bit of snow overnight, and reasonable light in the morning, gave me the opportunity to photograph some of the more common birds in our garden, although Greenfinch is not a daily visitor.


Another day with rather good light, and a rather rare visit from a Great Spotted Woodpecker, and an even rarer visit from a Fieldfare. I have managed some quite pleasing images of Fieldfare in our garden in past winters, but they just haven't played ball this winter. I don't suppose I'll get another chance until next winter now! Starlings aren't my favourite birds, by far, but there's no denying that their plumage is spectacular in the right light at this time of year. I think of them as 'the Pearly Kings' of the bird world (please follow this link if you don't know what a pearly king is). 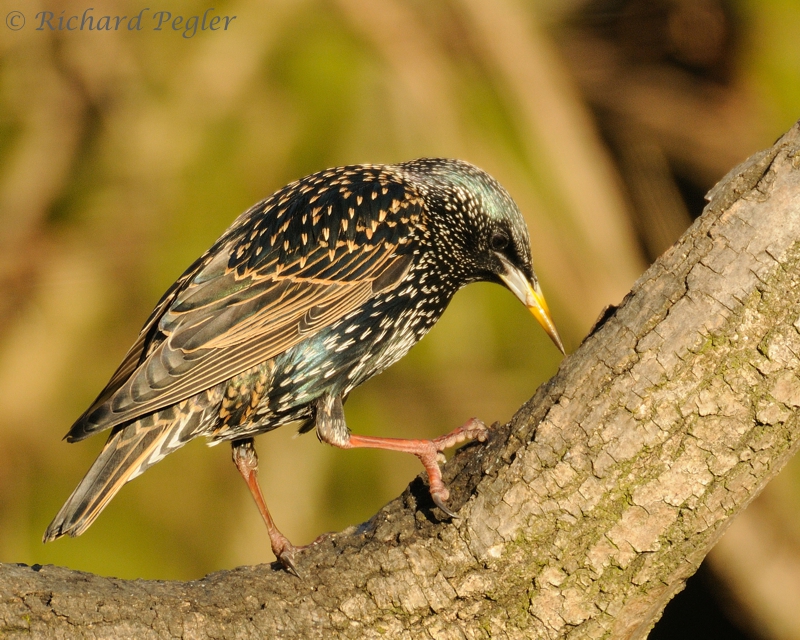 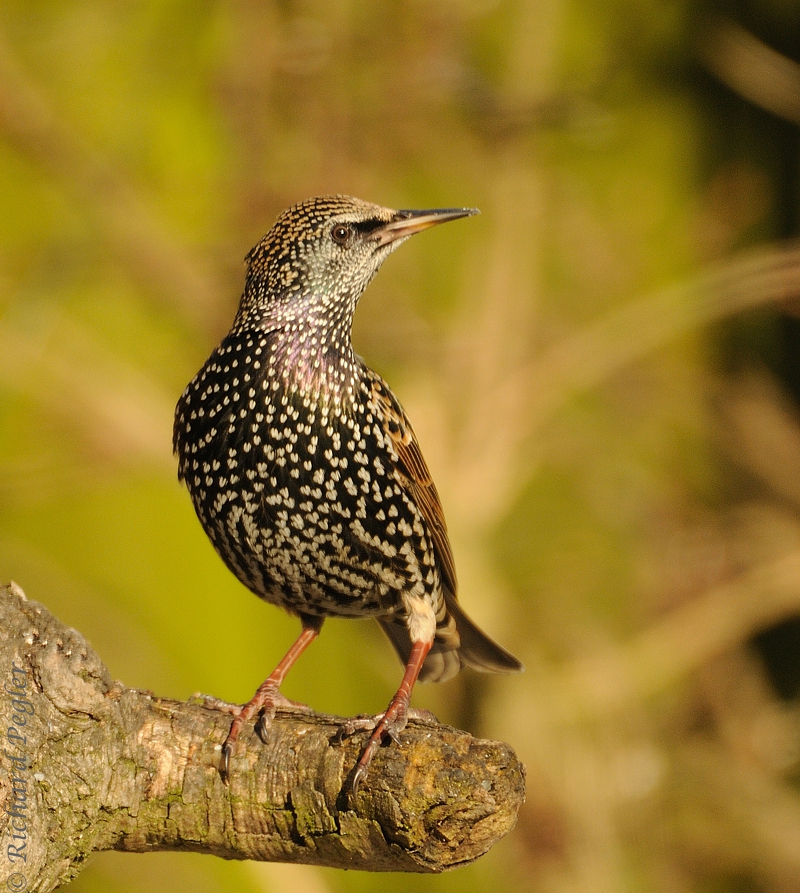 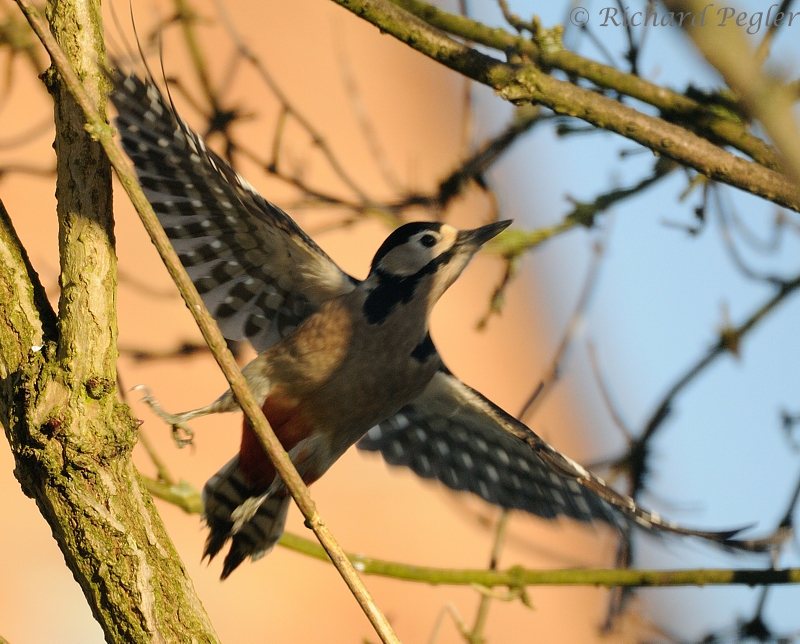 The snow was still hanging around in patches, and the Grey Wagtail that we first saw on 14th October was also still with us (the first time for this species since 2010, and now visiting us daily). Here's a couple from this day. 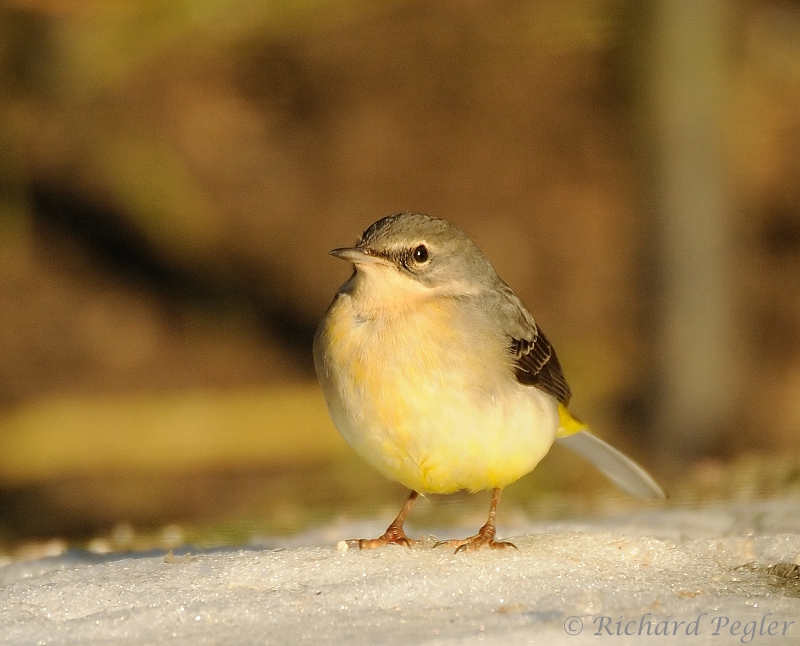 This was a dull day, and the snow was still with us - just. I include the Greenfinch because of its upright stance. Reed Bunting is only seen a few times each year in our garden.

We usually only have three or four sightings of Blackcap each year. I don't like to publish images of birds on feeders, but this one's just for the record!

Grey wagtails are not easy to photograph in low light as their constantly wagging tail usually ends up as a blur with slow shutter speeds. I did, however, manage to capture our visitor on a very dull wet day outside my study window (which is always in the shade in winter) with a limited level of tail blur!

Bullfinch only make occasional visits to our garden, but we have had more sightings than usual so far this year. It never fails to give me great joy when they show up - a gorgeous bird! Goldfinch have been with us in greater numbers than in previous winters, and are feisty little birds, defending their position on the feeders against much larger birds! The Goldfinch image was again in deep shade outside my study. 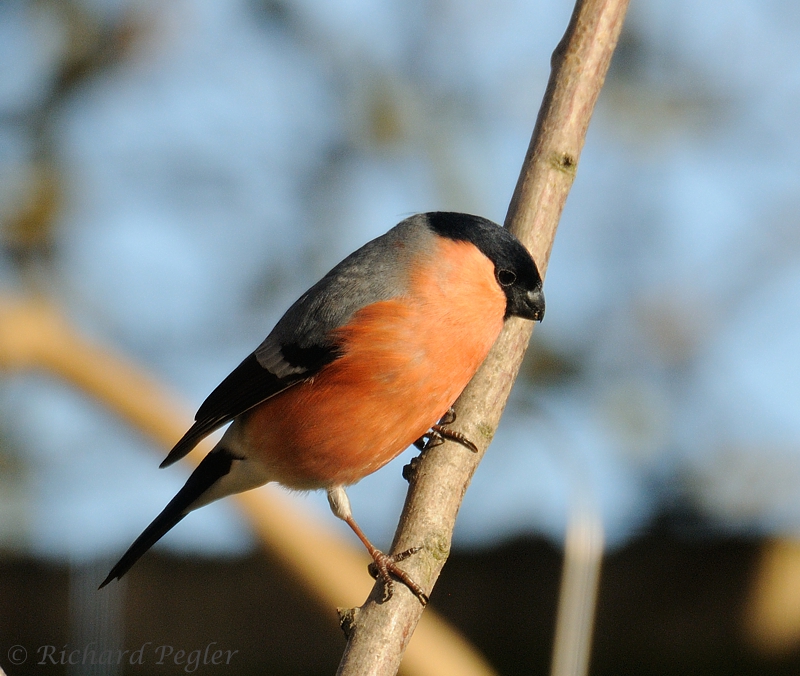 The female Greenfinch, whilst a lot less colourful than the male, is still a charming bird. At one time, many years ago, they used to be one of the most common birds in the garden - then they disappeared. They now seem to be making a bit of a come-back, with numbers up in 2014  by more than 100% over 2013 numbers! So you can imagine my delight.

Please excuse all the Grey Wagtail images. When this bird goes, we might never see one in the garden again! 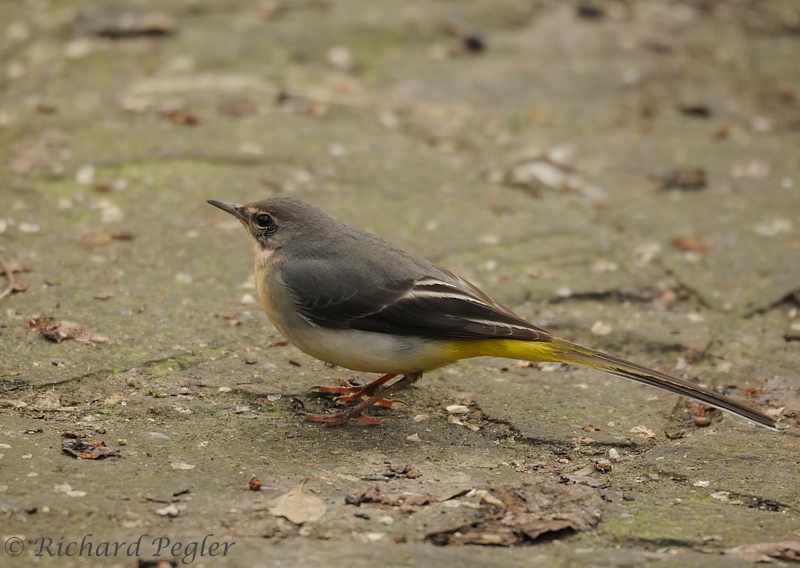 There was excitement this day, as we had our first Lesser Redpoll of the year in the garden. It seems that there are less of these around this winter than we've become accustomed to, possibly because of a relatively abundant food supply in Scandinavia, etc. Siskin, Brambling, and Waxwing are also thin on the ground - probably for the same reason.

The Magpie image is there to encourage me to do better with this bird. They're a virtually daily visitor, but extremely timid.

More excitement this day as we had our first Goldcrest of the year. With their constant flitting in densely twigged areas they can be quite a challenge to capture with the camera.

I got a slightly better image of Goldfinch, again in the shade outside my study, but with a very sunny wall as a backdrop - I think that, on this occasion, it helped!

The Redpoll made a welcome return.

The second Blackcap visit of the year, but again only a record shot with a feeder!

The previous day (22nd January) my wife, Lindsay, reported that we'd had a Pied Wagtail visit our garden whilst I was out for the afternoon with pal Titus. This was the first sighting in the garden since 2010, and so I was delighted when it returned this day.

The Pied Wagtail has visited us several times a day, ever since its first arrival. Here's a few from my study window, including one of the Grey Wagtail, which now seems to be getting a bit more yellow on the breast. 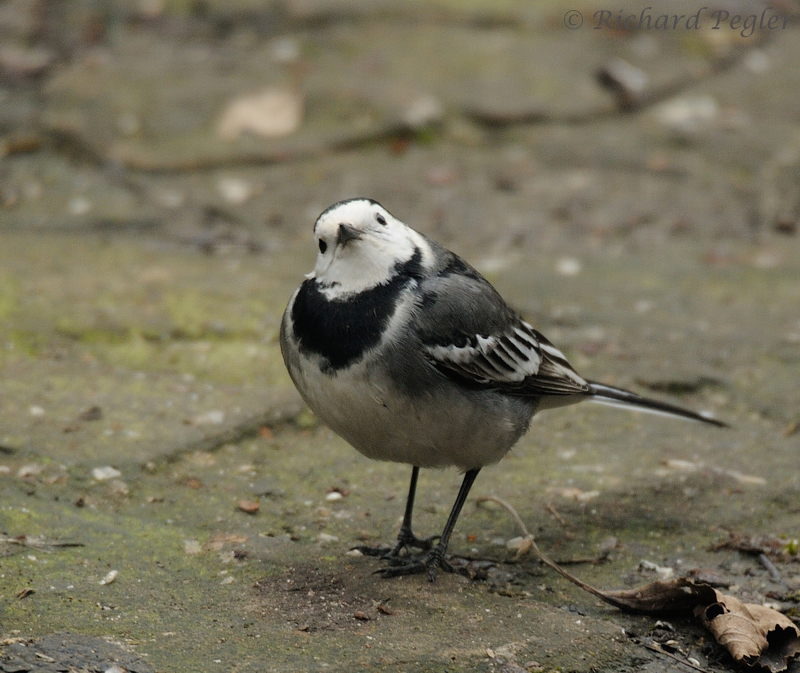 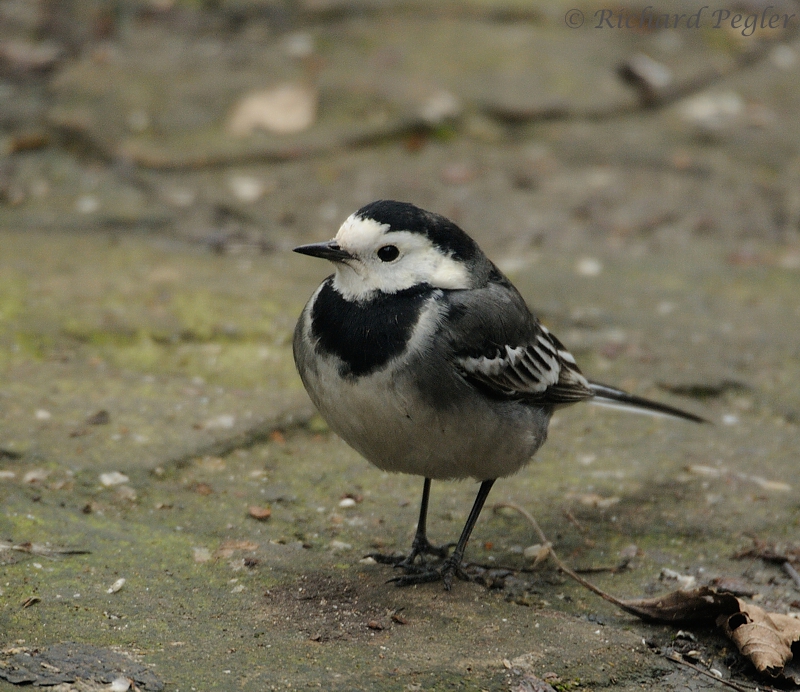 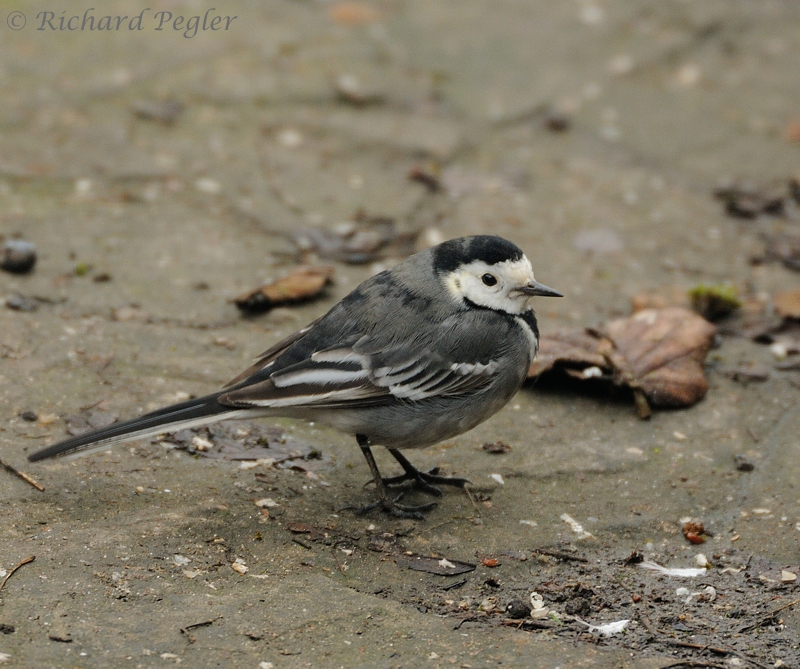 A couple more images from my study window on this day. I wish the Redpoll had been on a twig, as it would have been quite a pleasing shot of this tiny bird!

Amazingly, with all the birds in our garden, Sparrowhawk has been an infrequent visitor for a while now. This shot was taken early on a wet and cold day.

The previous day's rain turned to snow overnight. Sadly, it didn't give me the photo opportunities that I hoped for. Here's some from that day. 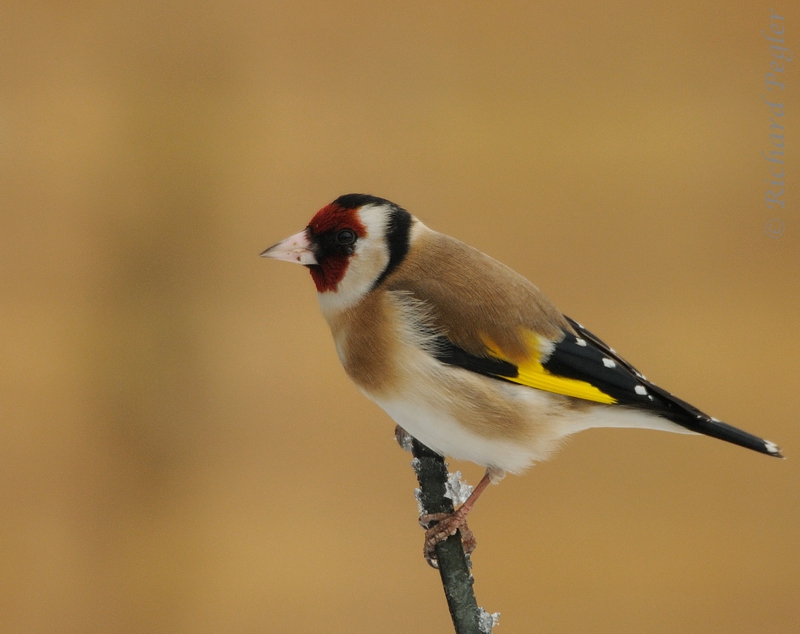 By the following day, the snow had nearly all gone. The excitement came in the form of our first Brambling of the year, the previous sighting being in October, 2014. I'm going to have to break my rule about birds on feeders yet again! I'm showing the Bullfinch because it's possibly one of my best ever portraits of this species - if it hadn't have been for the feeder! The Brambling has to be included 'for the record'. The Long-tailed Tits have visited more frequently than we're used to at this time of year.

I'm sure that Wren is present in our garden far more frequently that we see it. It's shown a few times recently, and on this day it emerged from within a low-growing Hebe (see first image) and then sat on top of a statuette of a Barn Owl (just 3 metres from me) for about three seconds before moving on. 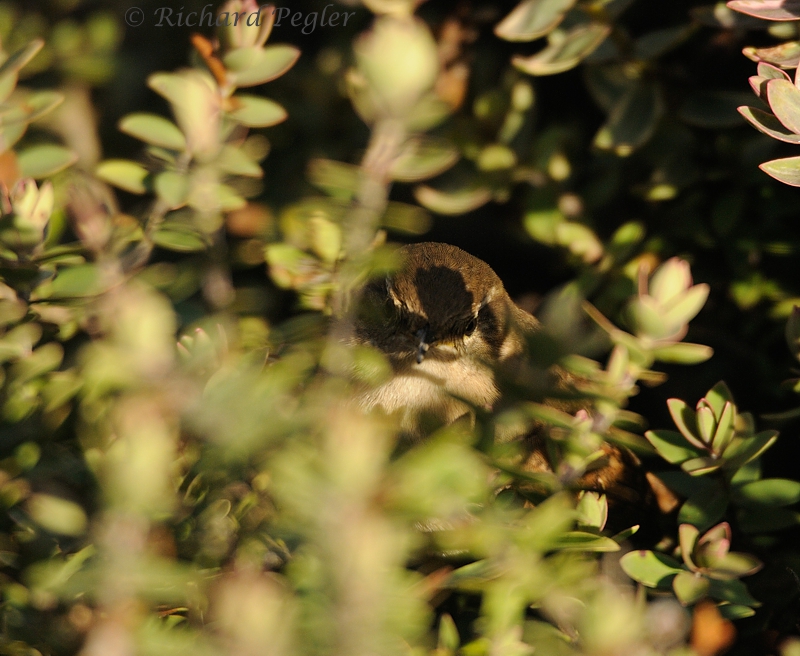 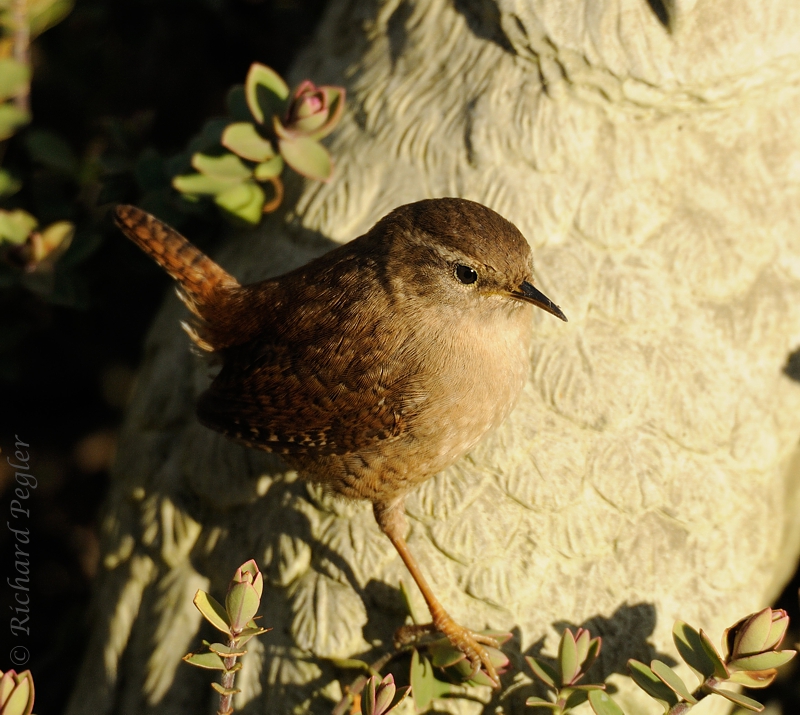 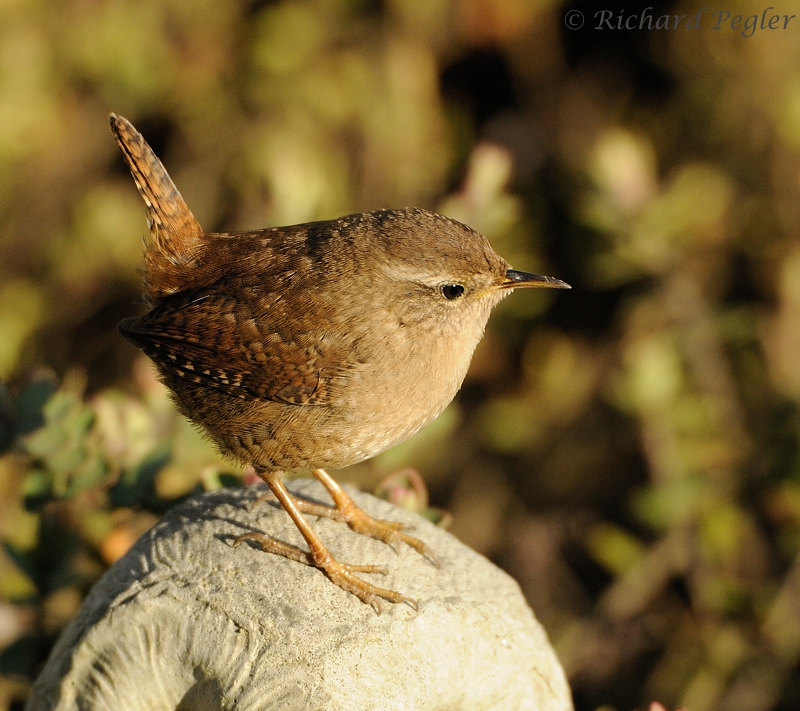 On Monday, between sessions of preparing our downstairs cloakroom for the fitters coming the next day, and loading files and software onto my new PC, I took a few photos of the garden birds. Redpolls had been visiting regularly, peaking at three birds on this day (1 male, 2 female) but, sadly, not seen since. At least I managed an image of the colourful male on a twig! Goldcrest put in an appearance, and I managed some images of that bird too. The first Goldcrest image, from my study, is taken at about 4 metres range. The subsequent two, from our conservatory, are at about 9 metres range, so I was pleased to get usable results of this tiniest of UK birds. 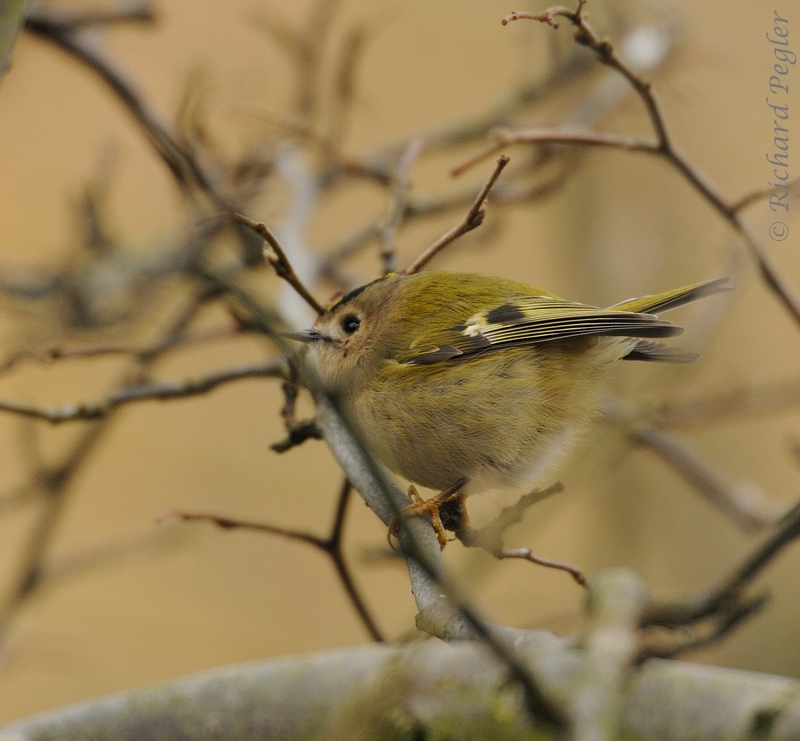 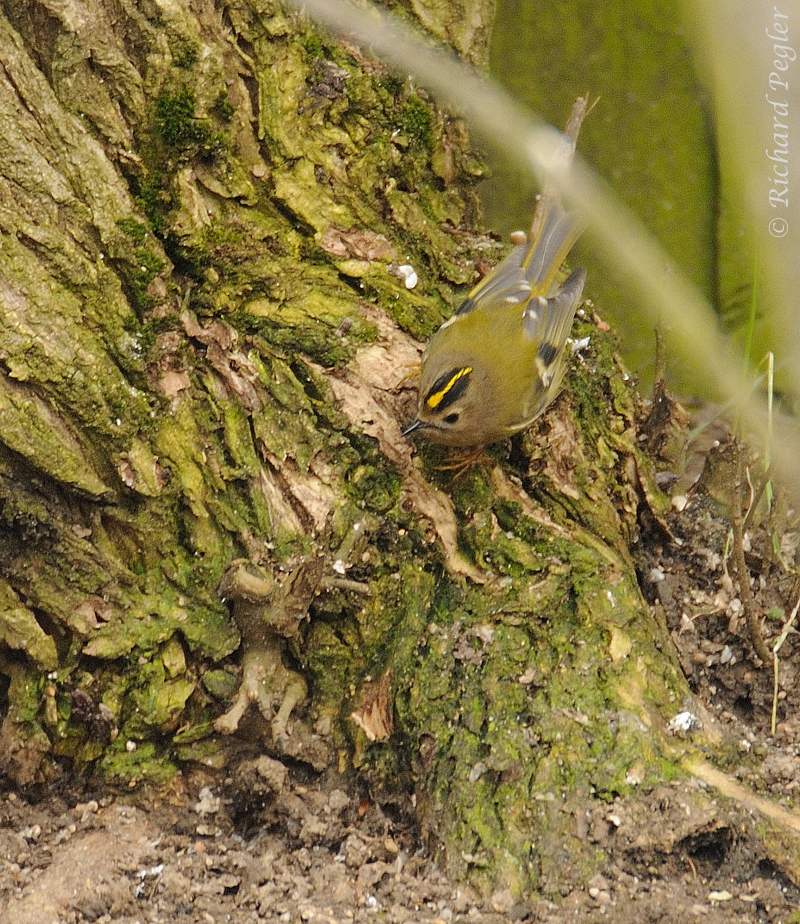 The light was far better, and I was better prepared for the Goldcrest when it arrived - same 9 metre distance through the conservatory glass, but improved results. 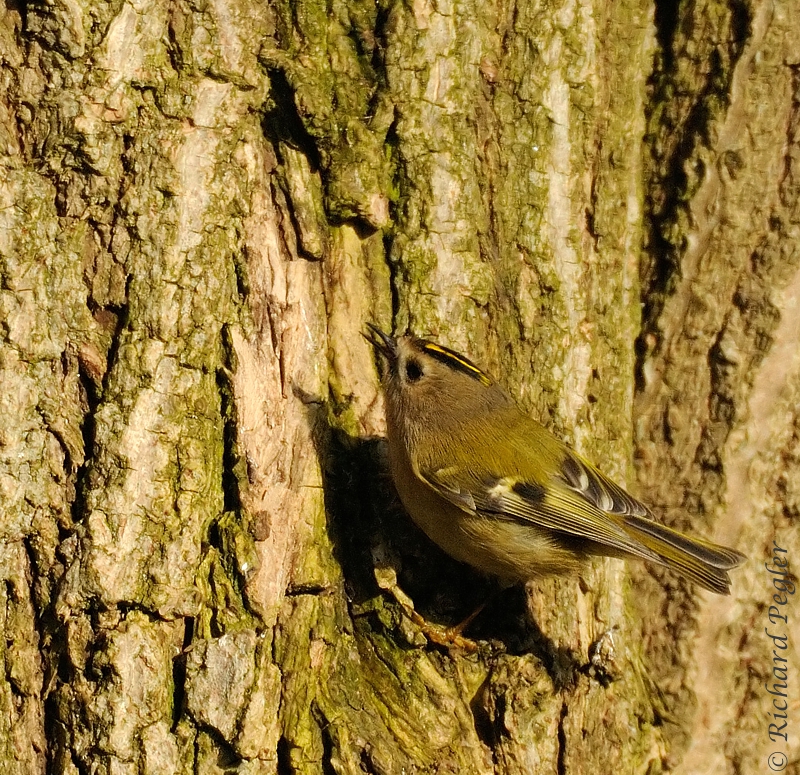 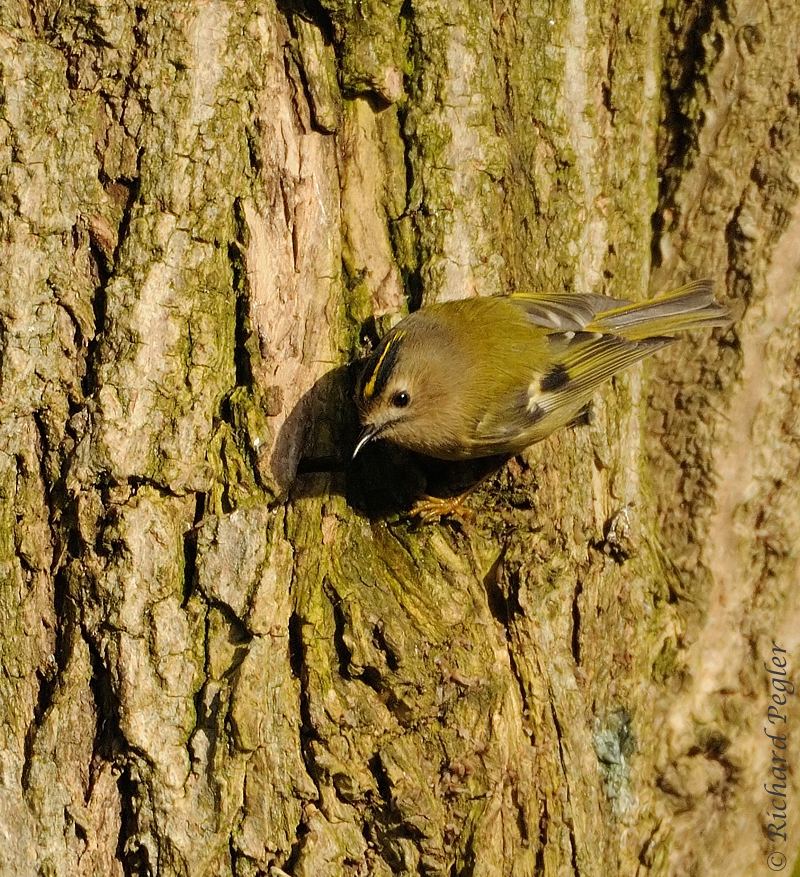 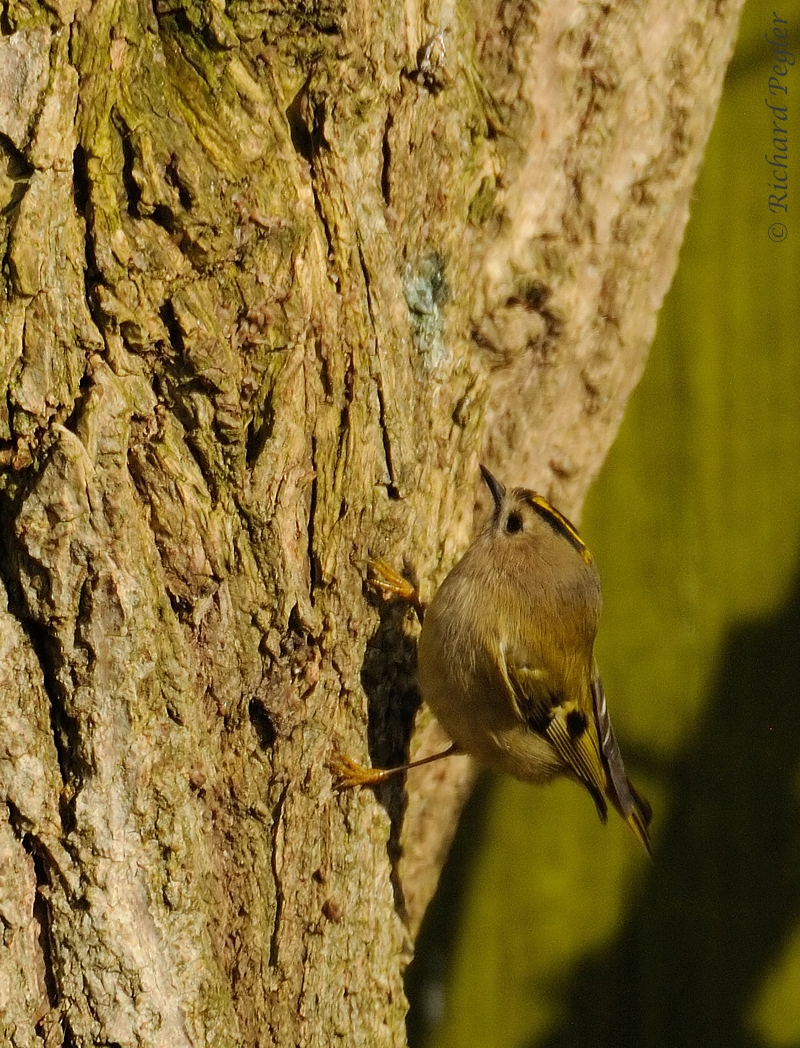 That's all from my garden for now. My next post will be very very much shorter and give an update on the Little Owls!

Thank you for dropping by.
Posted by Richard Pegler at 21:26 28 comments: