I've just come back from a week based at the eastern edge of Dartmoor, which is why I've been away from Bloggerland for some time. I had, I thought, scheduled this post to publish  on Wednesday, but I must have done something wrong! I'll try and figure it out.

Most of my photography, which usually takes place 'out in the wild' is what I describe as 'opportunistic' - i.e., it is not planned or staged with props, and I do not attract birds, or other wildlife, with any sort of lures. I do have a portable hide, but this only gets used once or twice a year.

However, matters in my garden are somewhat different. I do attract birds with numerous feeders, and I do set up basic photographic props (strategically placed branches) near the feeders in the hope of getting some reasonable photos - I don't like to take photos of birds on feeders, unless it's the only way I can get a record shot of an interesting bird. I also use my hide a little more frequently in the garden (2 or 3 times a year) than I do in the wild. I have 6 bird feeding stations in my garden, five of which are visible from my study window. The 6 stations have a total of 14 feeders. Consumption in the winter months is approximately one and a half kilogrammes per day. In addition to the feeding stations there are 4 watering points/bird baths and 2 hedgehog feeding stations.
In some ways, this winter in the garden has been a bit disappointing. In previous years we've had regular visits by winter specials such as Redpoll, Siskin, and Brambling, with last winter being a record year for Redpoll and Siskin, although not quite so good for Brambling. I see that, on 1st January 2016, we had 25 Redpoll and 13 Siskin - what a start to the year! However, our last sightings for these three species, to the end of February, were Redpoll (18th December, 2016), Siskin (2nd September, 2016), Brambling (14th October, 2016). I'm wondering if these early sightings mean that the birds passed through and ended up further south - in which case, I hope they visit on their way back north again. I take some consolation, however, in that we we have done slightly better this winter with the 'winter thrushes', and that we've had a garden 'lifer' in the form of Green Woodpecker (which paid us a second visit a couple of weeks later).

My last post on garden birds related to the week up until 11th December, 2016, so here are a few images of some of the birds between then and the end of January.

Amongst the visitors this dull cloudy day were one Mistle Thrush and one Fieldfare. The first two images were taken through the glass of my study window. The third was difficult as it was taken at an extremely acute angle (approximately 30 degrees) through the double glazing of our bedroom window. 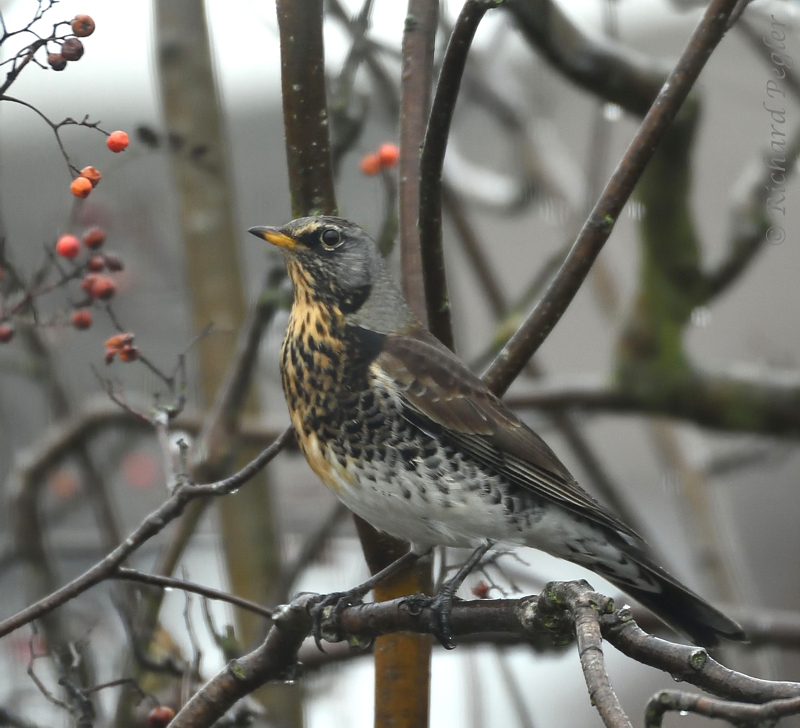 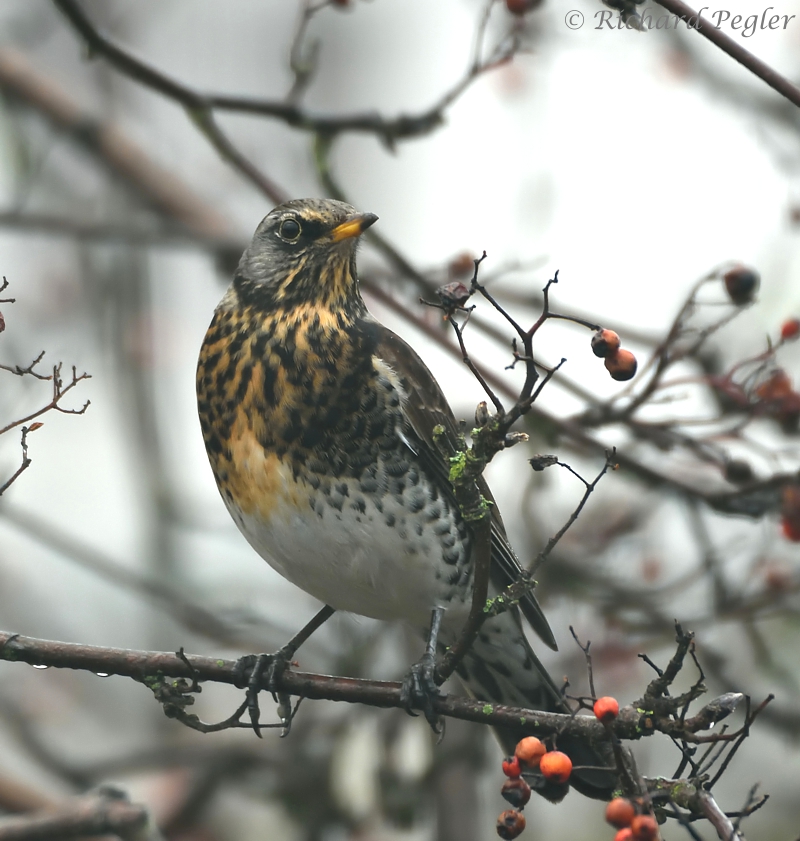 The following day (also cloudy dull), visitors included 3 Mistle Thrush, and a Redwing. I didn't manage any usable images of the Redwing. We also had a visit from a female Great Spotted Woodpecker - a species not often seen in our garden.

Although cloudy, the day was somewhat brighter than most we'd been experiencing. As well as the usual suspects, visitors included Grey Wagtail, Song Thrush, Stock Dove (2), and Long-tailed Tit (2).

We usually get Grey Wagtail for a few days each year, but this tends to be in spring or autumn. This one was with us from 26th December until 25th January. 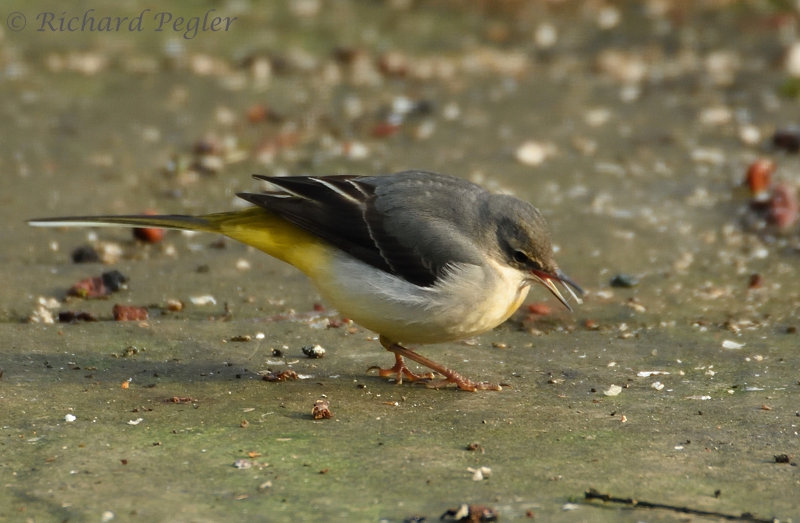 Out in the wild, I'm not usually too enthralled to see Stock Dove, as they pose a threat to nesting Little Owls. However, these extremely timid birds are very welcome on the relatively rare occasions that they visit our garden. Their iridescence neck markings are wonderful. 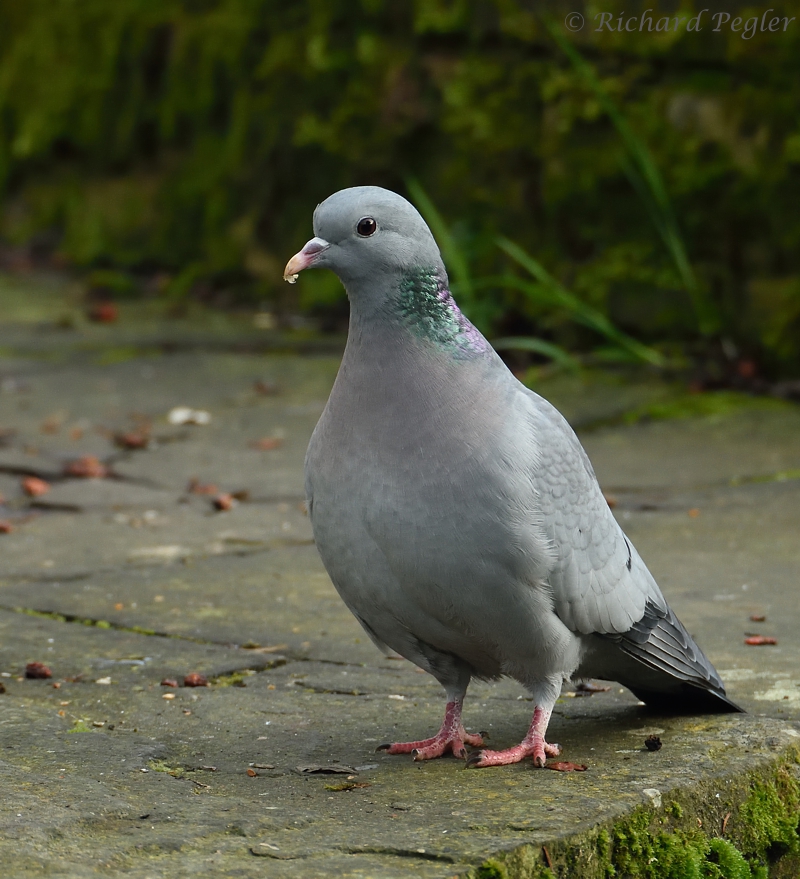 Bullfinch is usually a relatively uncommon visitor to our garden, but this winter they have been a daily feature with up to five birds at a time. They are extremely handsome birds, but difficult to photograph in the garden as they seem to frequent the darker places, and they are some of the messiest eaters imaginable - they accumulate debris round their beaks as they eat, as you can see below!

Here are a couple of the more common birds photographed that day. 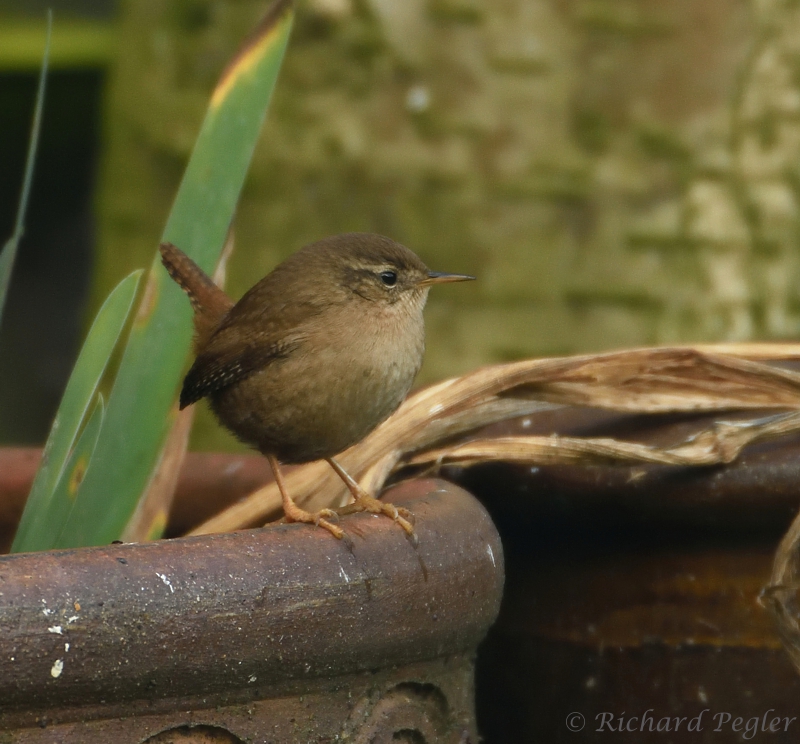 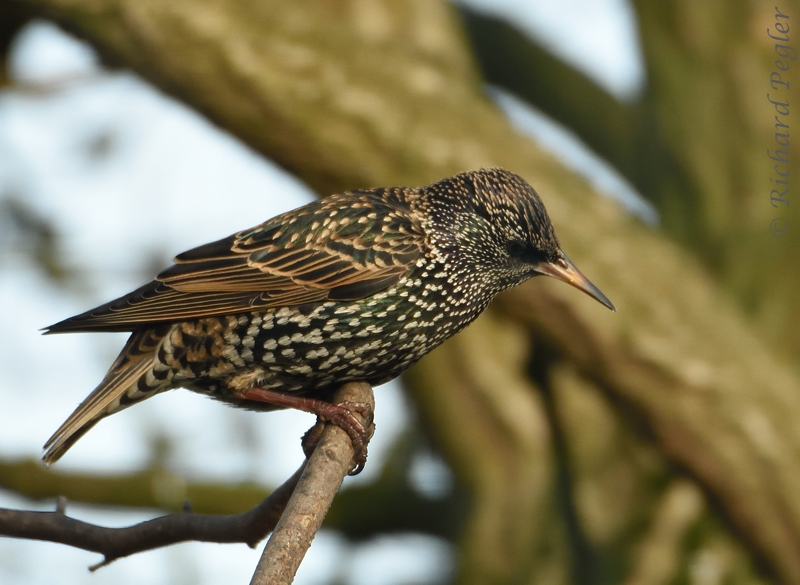 We didn't have any unusual visitors on this particular day, but I did take a few photos of the 'regulars'.

On this day I did take a few shots of a male Bullfinch. Yep, a messy bill again!

It was a wet day, and I couldn't resist this shot of a soaking squirrel outside my study window.

We'd had a little snow during the night, and this hung around for a while. I managed to catch Mrs. B. before she'd made too much of a mess of herself.

It's very rarely that we see Reed Bunting in our garden. This was one of those days!

Eventually, the sun started shining through, and I got a shot of the male Bullfinch.

We were still getting regular visits by the Grey Wagtail. Here it is with a remnant of snow.

Some of you may know that I have a bit of a thing about water - splashes and light reflections. In these next two images I think it looks as if the bird is standing in pools of quicksilver. 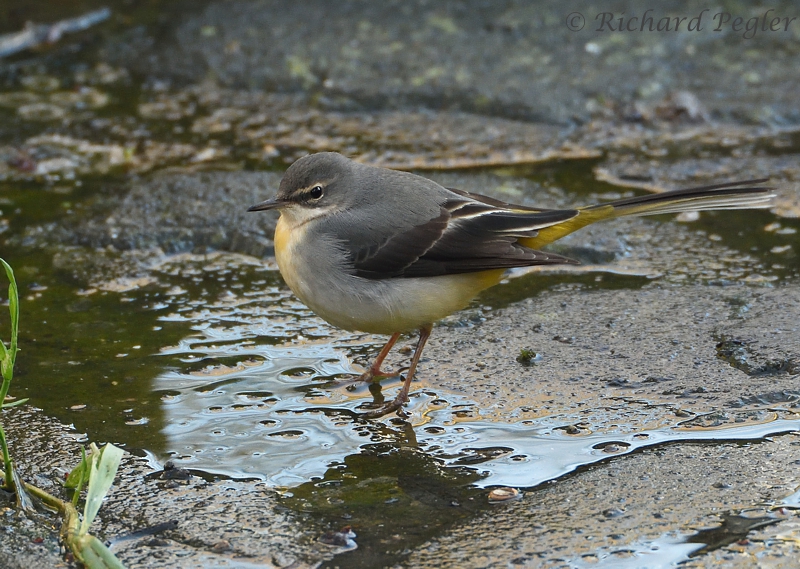 A star visitor this day was a Goldcrest - onother relatively rare visitor to our garden. This is the UK's smallest bird and it was difficult to photograph through my study window as it was in shade, and constantly on the move. 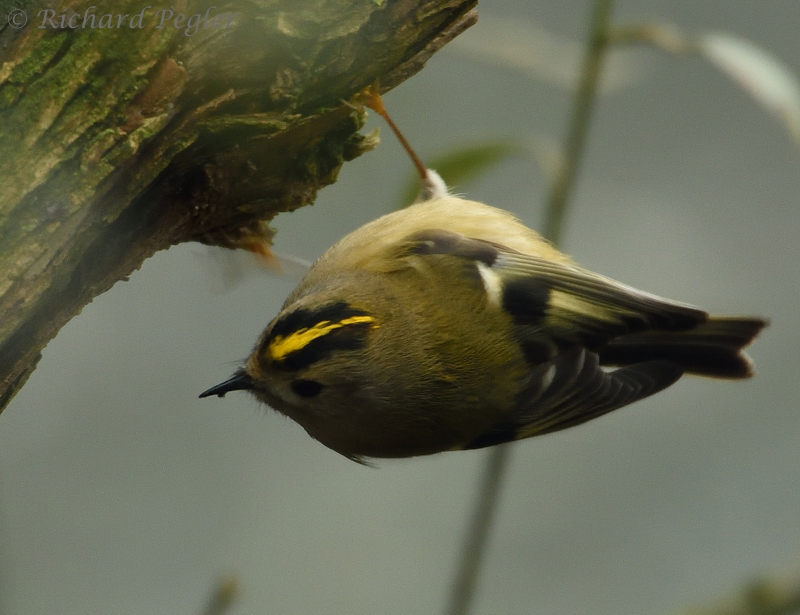 I had another chance with the Goldcrest on this day. 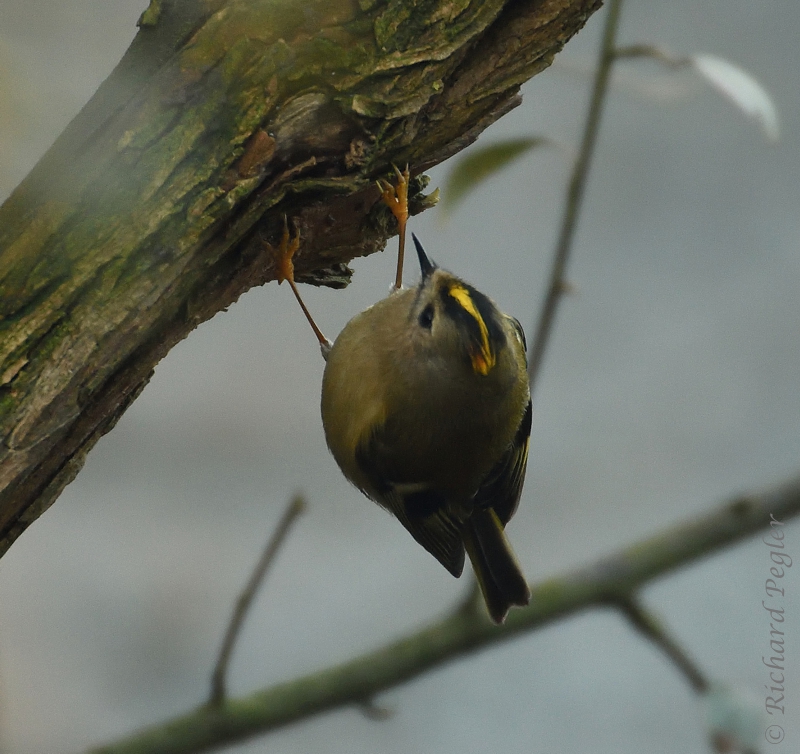 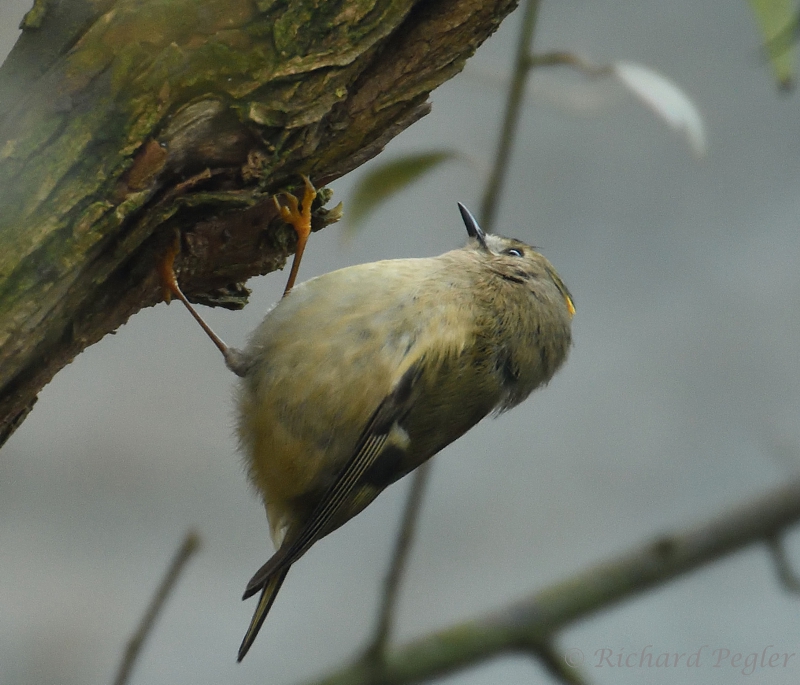 The Bullfinches were around again. Collared Dove are a daily visitor to the garden and, together with Woodpigeon, are responsible for probably around 60-70% of all the bird food consumed in our garden. It's tempting to try and find ways of making things inaccessible for them, but my wife will not allow discrimination!

No report on the subject of garden birds would be complete without a Robin!

A dull day brought a few common birds in front of the camera. Today we were also graced with another visit from a female Great Spotted Woodpecker.

I'd originally intended this post to cover the period up until the end of February, but I think that there's enough in this post already!

Thank you for dropping by. Maybe next time the post will cover February?

John and I had missed a few Thursday afternoons out of late, but we did manage to get out on this day. It was my turn to drive, and I picked up John at his house at 13h30. The late start was because we were going to have a late finish, with an Osprey Volunteers' pre-season meeting starting at Rutland Water at 17h00.

Sadly, there was no sign of the Little Owls at my Site No.41, where the nest tree had come down in the gale on 23rd February.

Close to the place where we'd seen a pair of Stonechats on our previous outing, we found them again. Once more it was only the male that was in any way obliging, and the sun was in totally the wrong direction.

Our first, and only, Little Owl for the day was seen at my Site No.37, partially obscured by branches as is normal for this site - and the light was behind it too.

We eventually ended up at Rutland Water, on the Egleton side of the reserve and, having checked in, set off towards the various hides to the north of the visitor centre.

From Grebe Hide, on Lagoon 2, we watched the interaction between Coot and Moorhen. In the second image, the Moorhen seems to be squawking at something. 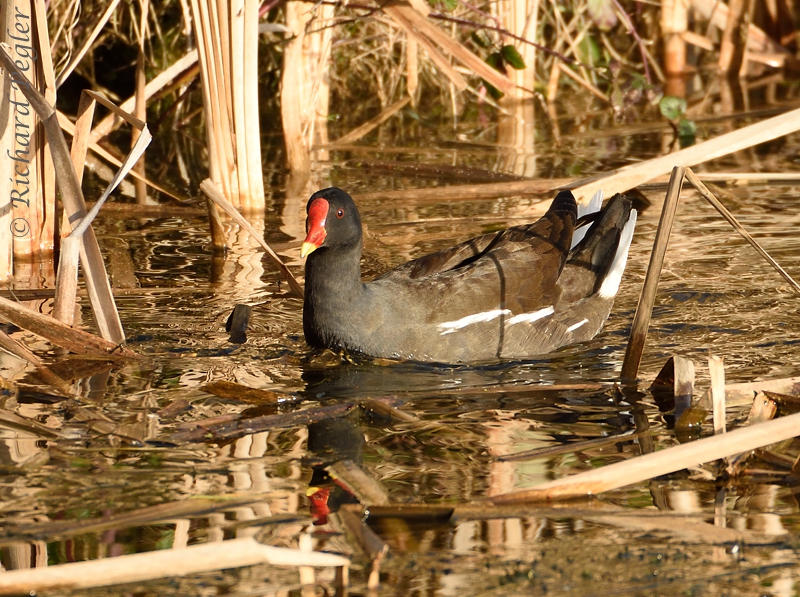 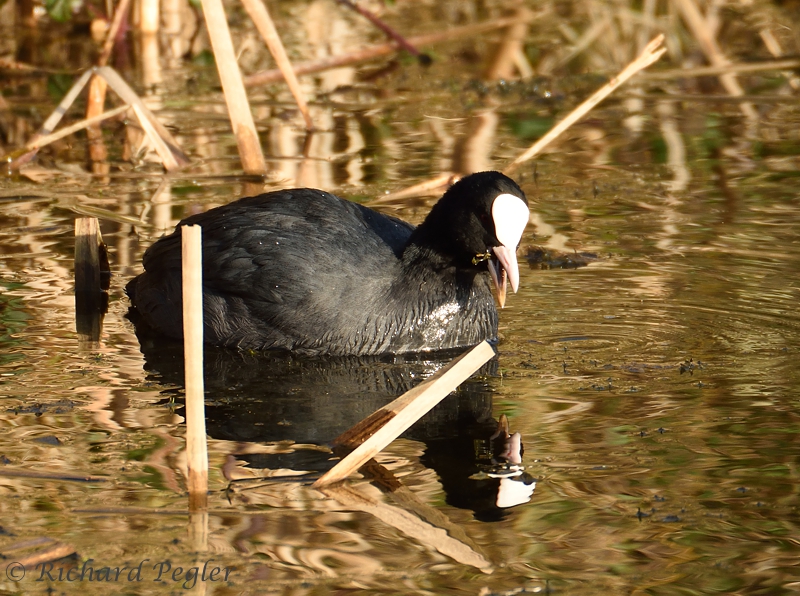 From Grebe Hide I took the following image of a Canada Goose. I'm only showing it because I found that, in this pose, it struck me as how small the bird's head appears compared to the rest of it!

There was also  a pair of Gadwall present here.

From here, we moved on to Shoveler Hide on Lagoon 3.

Ladies and Gentlemen, I give you the Amazing Circus Shoveler:-

This duck was, for quite some time, continually turning complete somersaults in the water. There now follow quite a few shots of this - as some of you will know, I do have a bit of a thing about water, particularly where there are splashes, or light variations on ripples. We start with the bird at rest - momentarily! 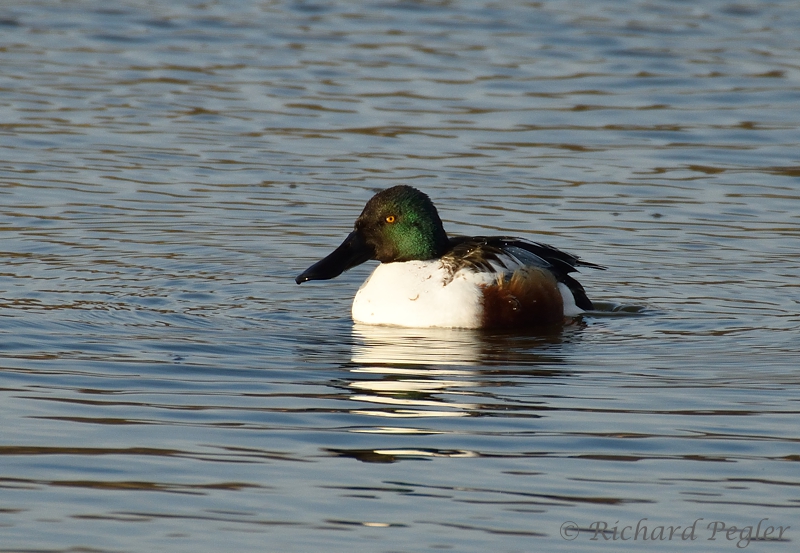 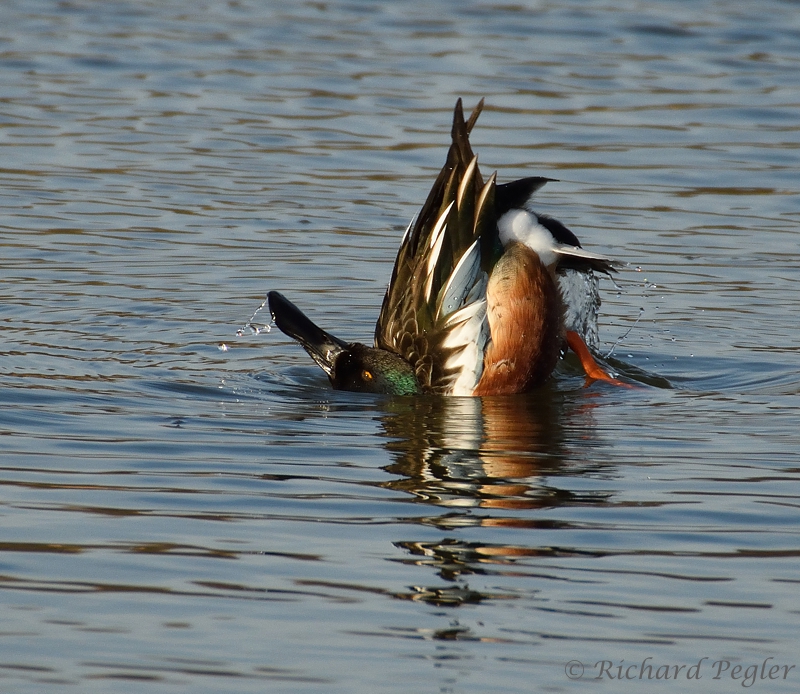 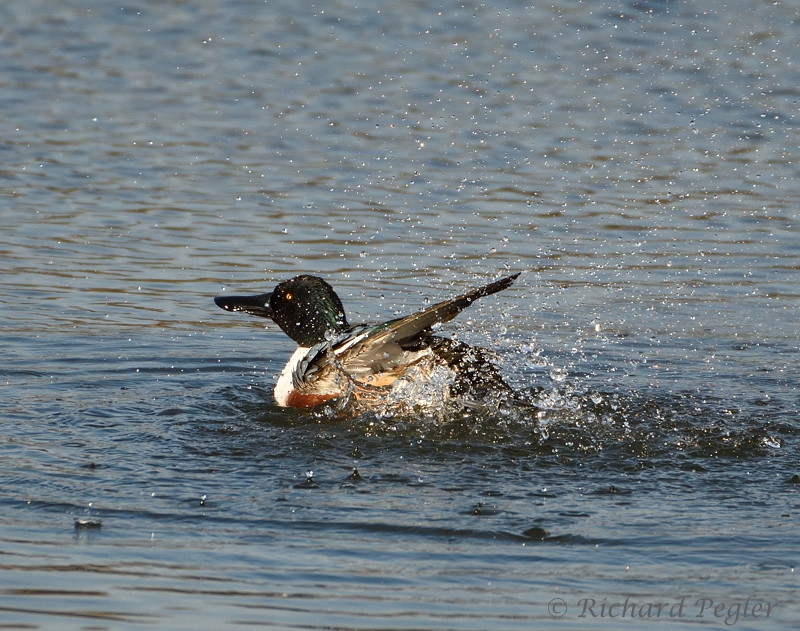 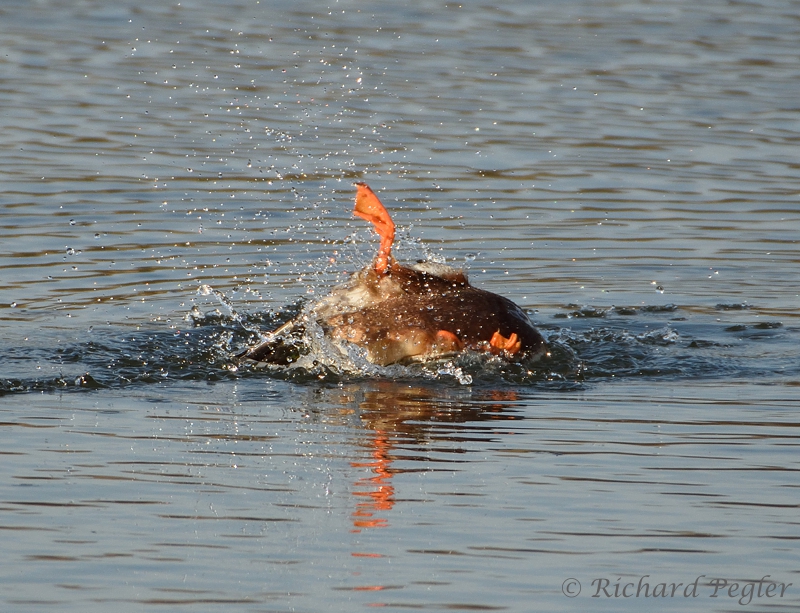 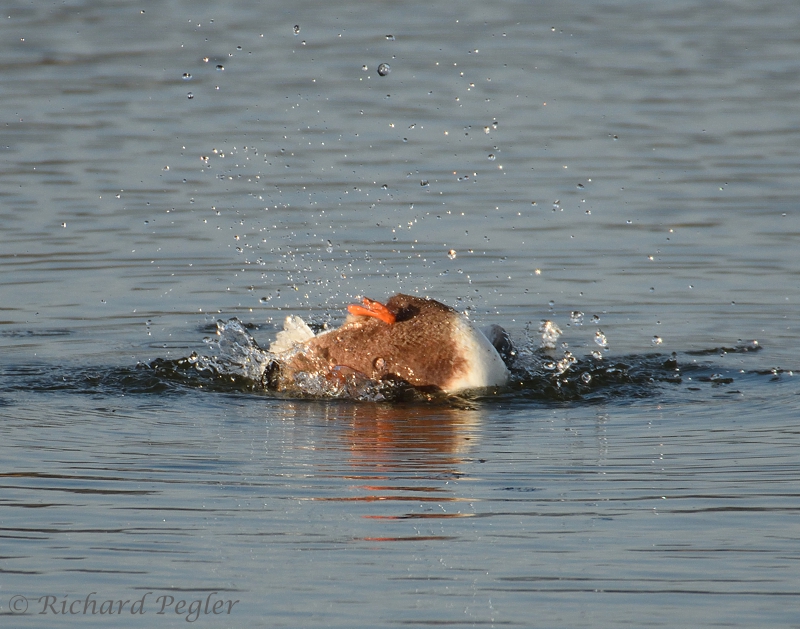 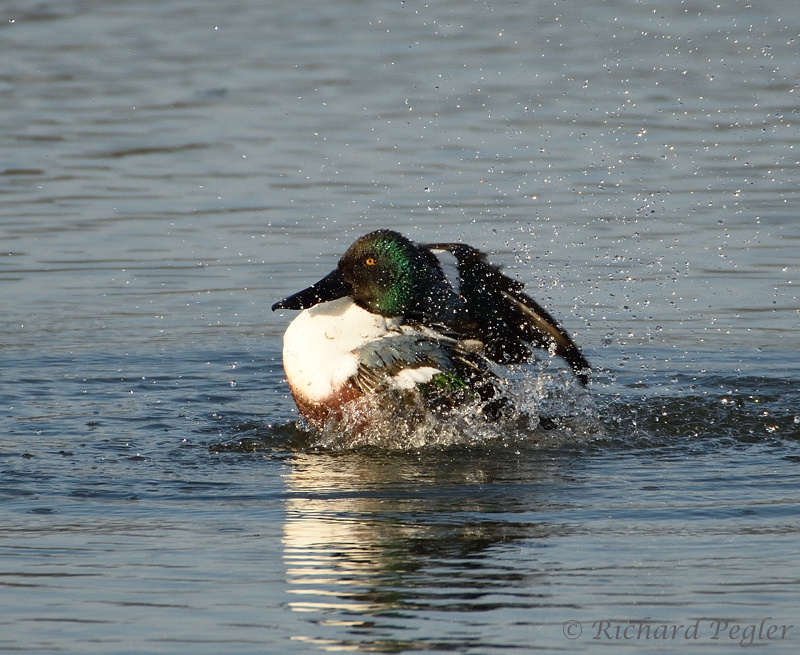 From Shoveler Hide we moved on, at John's suggestion, to Plover Hide on Lagoon 4, in the hope of seeing Smew. As we arrived, a drake Pintail was in front of us. It had suddenly become overcast and, as it was now 16h42, light levels had fallen significantly.

I spotted a drake Smew in the far distance, and it stayed there for ages. Attempts at anything other than a record shot came to nothing. In the meantime I occupied myself with some of the nearer birds.

These Great Crested Grebes were starting their courtship.

As well as the drake Smew we'd started seeing redhead Smew. Eventually we had 6 redheads. I suspect that at least one of them was an immature male. Here's an image of four of them - they stayed very distant.

Here's one of the birds on the nearby island, with a female Mallard for size comparison.

At 17h08, with the light very bad, a redhead Smew came drifting by in front of the hide. This was the nearest thing to a close shot that we managed.

Suddenly, at 17h18, there was a brief break in the cloud, and the drake Smew had come somewhat nearer and was now less than 100 metres away. This enabled some record shots to be taken which show some key features of this spectacular bird.

It was time to set back towards the car park, but we called in at Sandpiper Hide, also on Lagoon 4, to check it out. Nothing interesting was seen from this hide, so we started to leave. I was already out of the hide when a Peregrine Falcon flew past. I rushed back into the hide, and we found that it had landed on the Osprey nest, probably around 300 metres from the hide. It was now 17h40, and the light was dire - it was extremely difficult to get focus.

There is some concern as to whether the Peregrine will vacate this nest when/if the Ospreys return.

As we left, the Starlings had gathered. We could only dream of what this scene might have been like if we'd had 'murmuration numbers'.

Half an hour later we were back at the car, and found a pleasant spot to have our picnic tea. We then continued to the Volunteer Training Centre, where we were amongst the first to arrive, and were able to enjoy coffee and biscuits before the meeting. It was good to meet up with old friends and meet some new faces.

Having dropped John off at his place, I had another treat on my way home. I spotted a Barn Owl at a location I've not seen one before - it flew across in front of me as I neared a corner.

I seem to remember that, a while back, I hinted on a post to feature some of my garden birds. Maybe - - - .

Thank you for dropping by.
Posted by Richard Pegler at 09:35 36 comments: