Earlier this year we were getting frequent visits to our garden by Sparrowhawks. Fortunately these fizzled out, and we then went for a few months without seeing one. This month (November) those visits have started again, and become much more frequent.

The visits have been, primarily, by a male bird - in fact, I suspect by two male birds. Earlier in the month, the visiting bird was very timid, and flew off as soon as it detected movement behind the window. More recently the bird looks different (it has some white patches on its head and on the top of its wings) and is extremely bold. It ignores me when I wave my arms around, bang on the window, and when I open and slam the window closed noisily! One day this bird visited at least six times. Fortunately the success rate has been low, and I'm only aware of three successful strikes - two Goldfinch and one Greenfinch.

One factor is constant, however, and that is that the bird only seems to come at times of very dull, and often wet, weather. This does not make for good photography. Here are some of my efforts - all taken through the glass of (mainly) my study window, or the windows of our conservatory.

This is the timid bird - taken from my study, of the bird at the end of my garden. This was with the old D300s whilst the D7200 was away for repair.

I was still working with the D300s this day. The first image is of the bird on the feeder pole, just outside my study window and probably only six metres away. 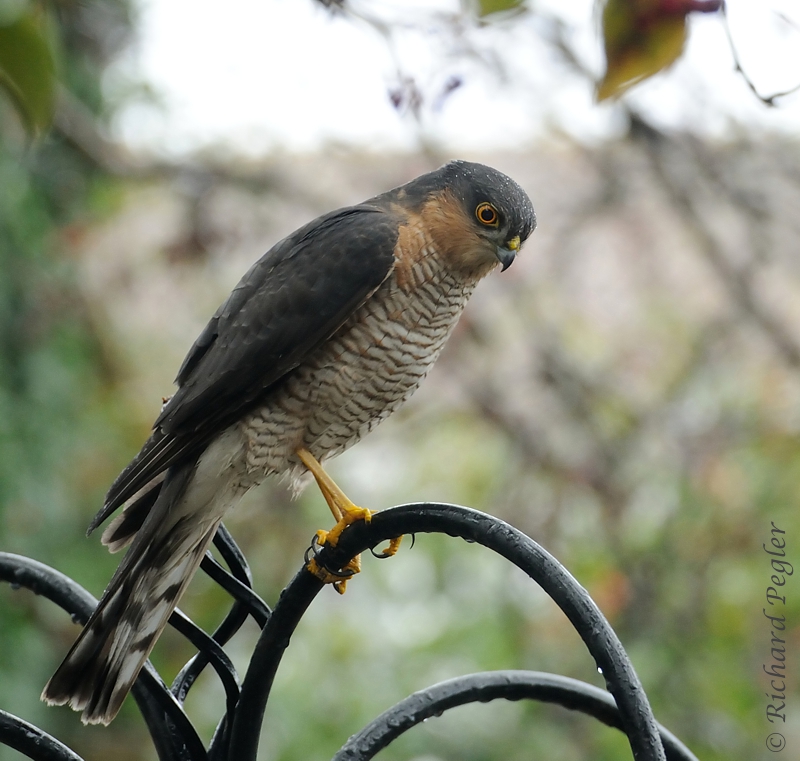 The next image was when the bird was near the top of my garden, just over three hours later.. 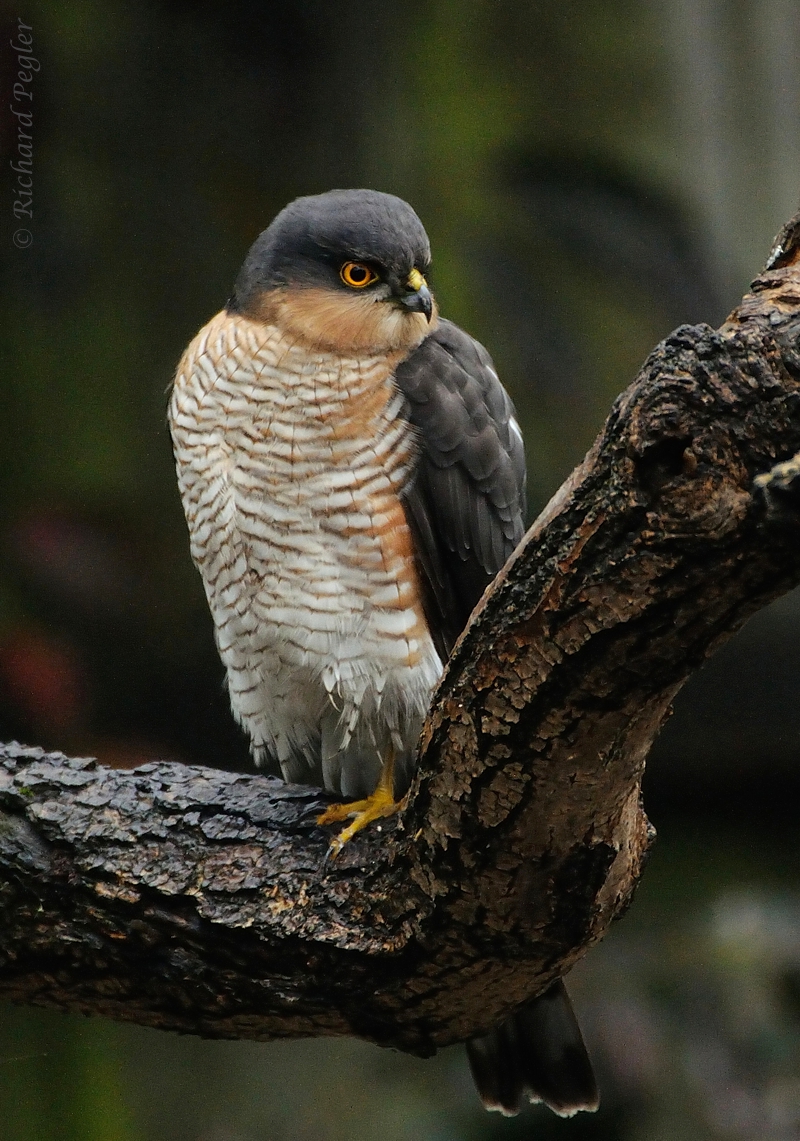 It then flew towards me and landed only about 8 metres away. The light was absolutely dire here, and I was lucky to get these images. 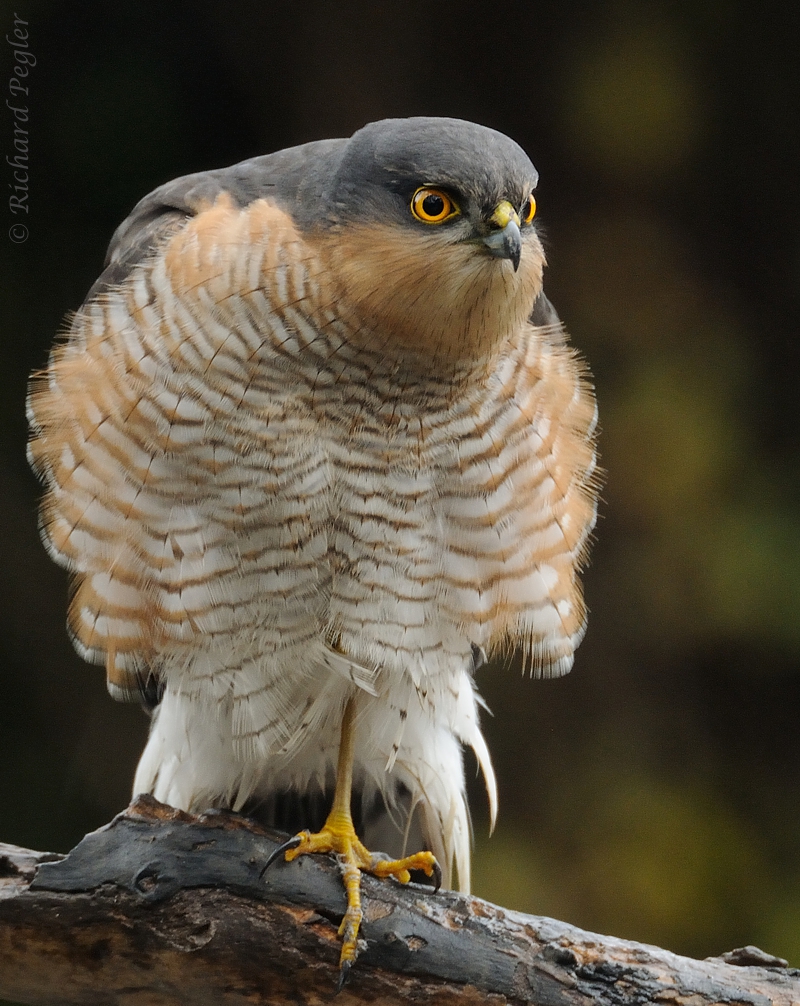 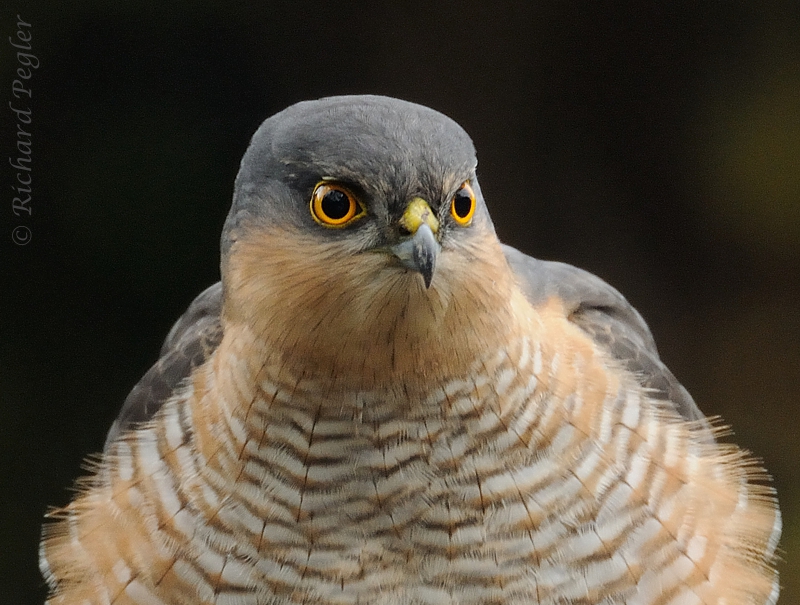 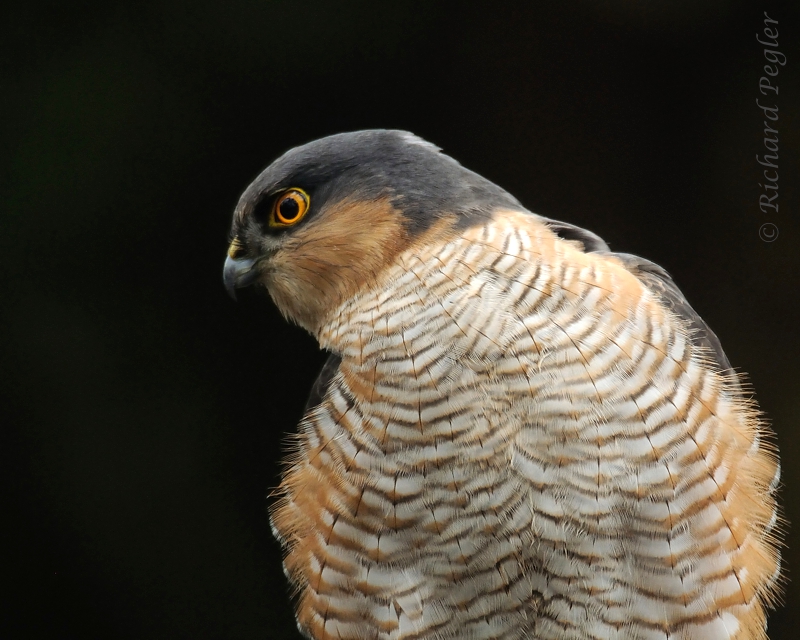 This was the day that the bird visited at least six times. I took some photos from three of those visits. I'd got the D7200 back by now.

These are from a visit when the bird landed on the same perch as depicted above, about 8 metres from me. After I'd taken my photos, I opened the window and slammed it shut again to frighten it off - and it barely batted an eyelid! 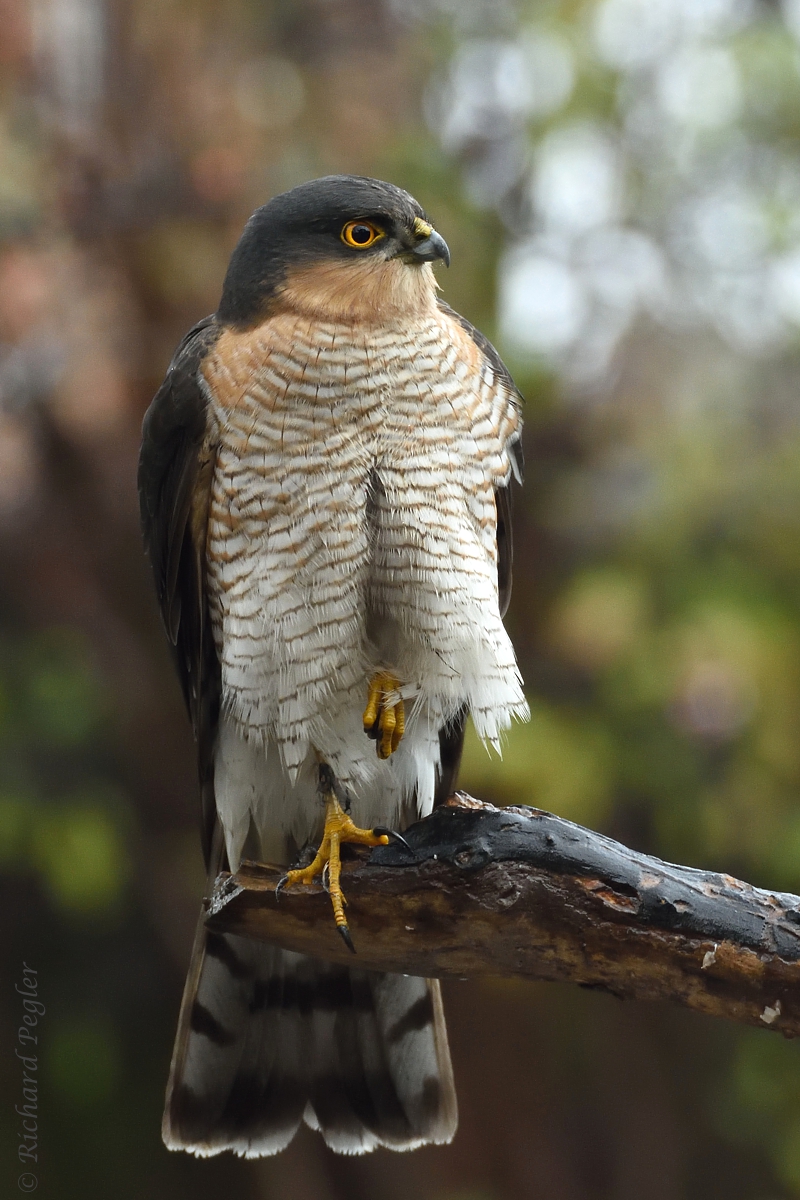 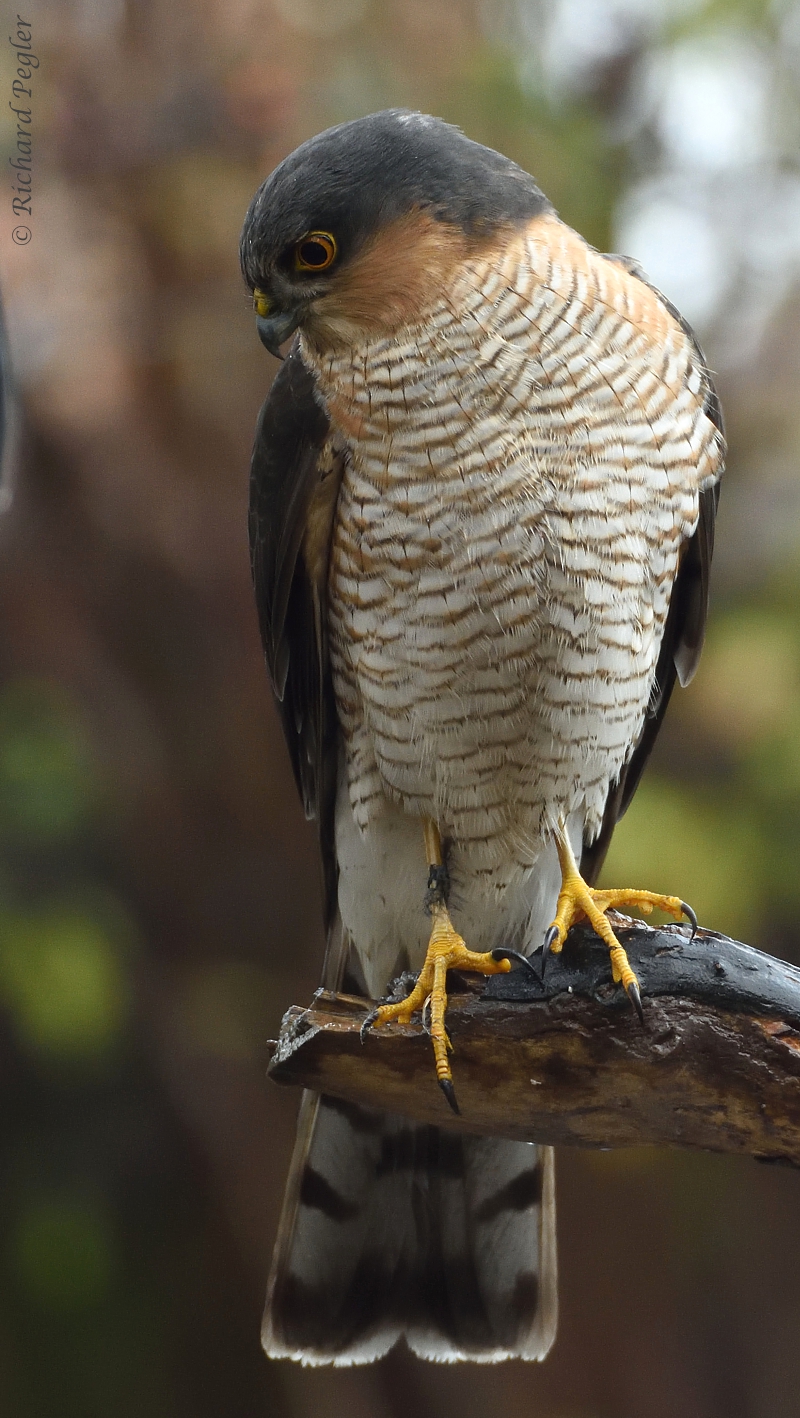 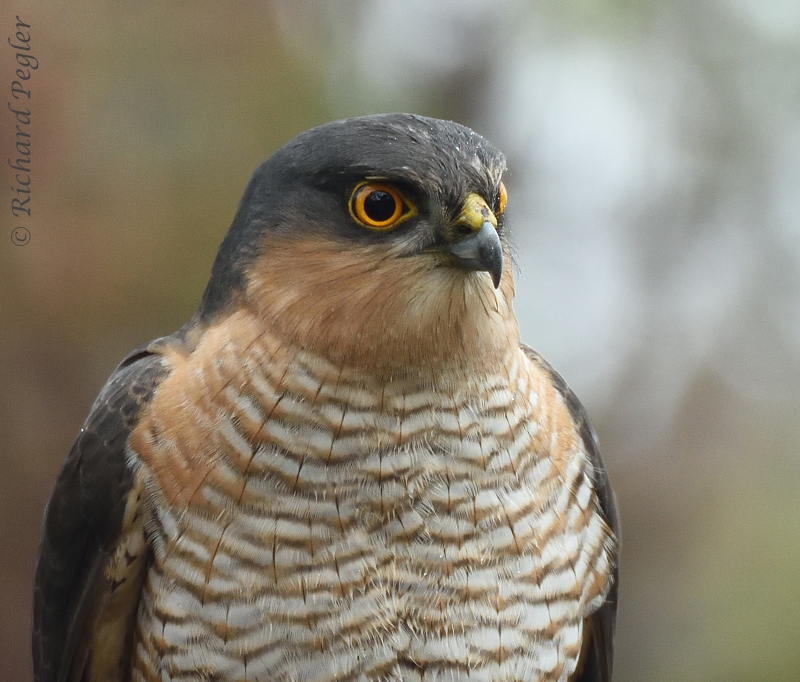 These were from the same visit, but from a slightly different angle. I've had to tightly left and right crop the last sequence and this next sequence because of intervening 'rubbish'. 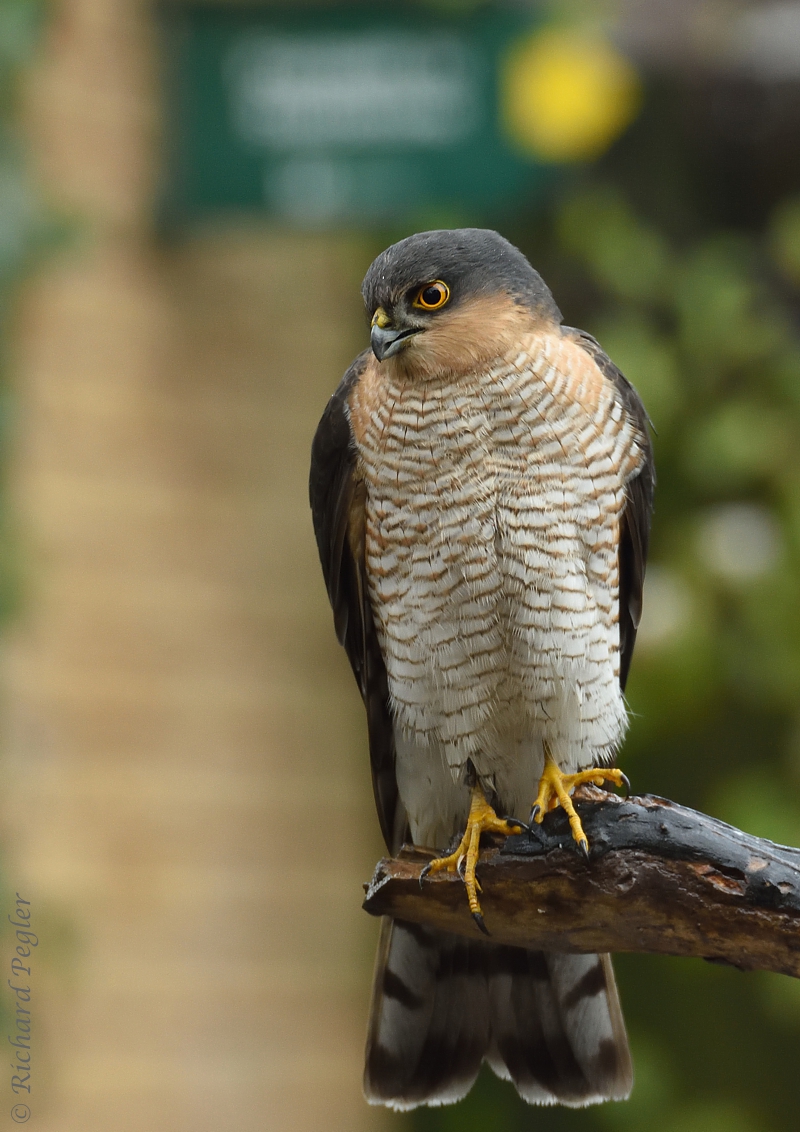 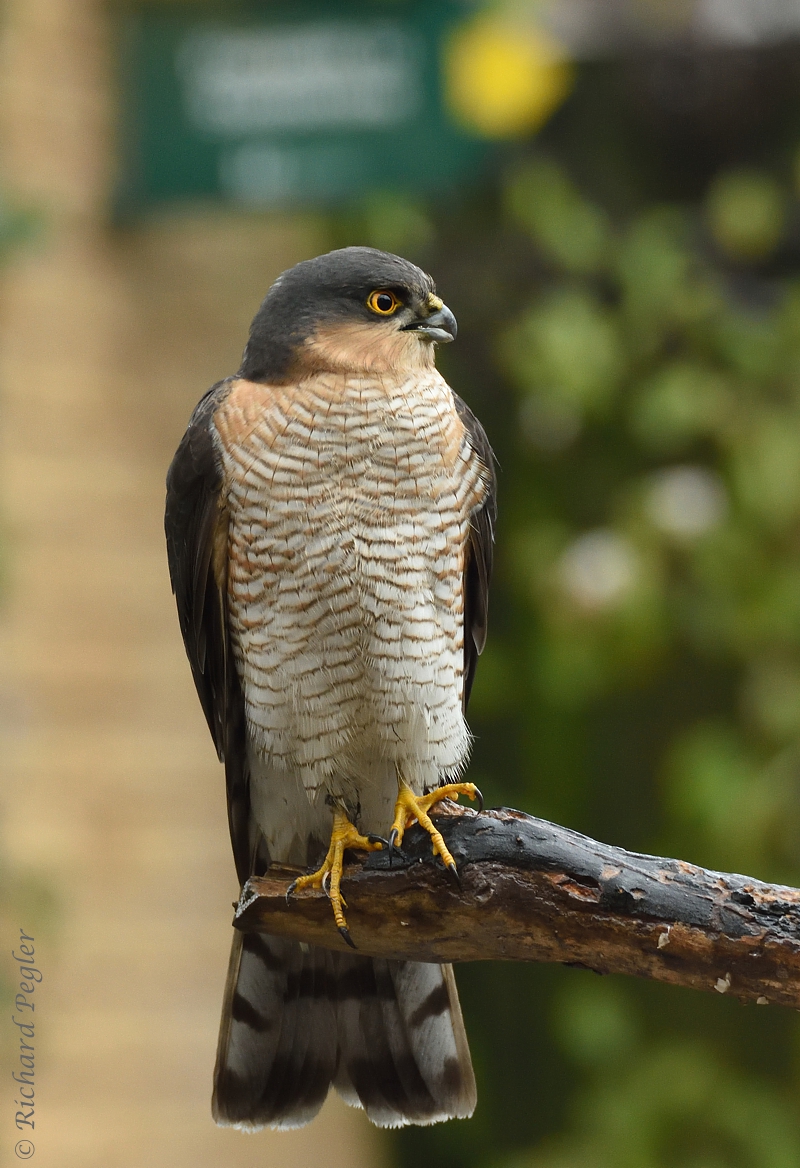 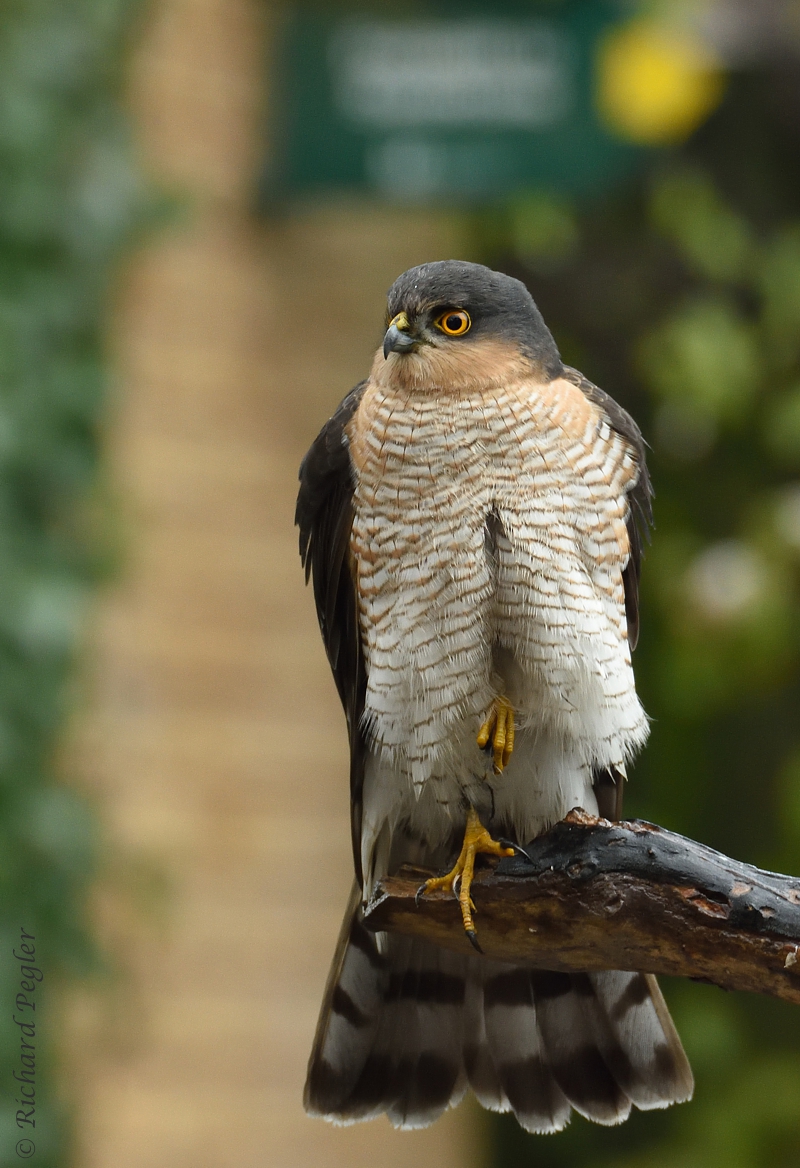 Fifty two minutes after its departure, it was back again on the same perch, but in a slightly different position. 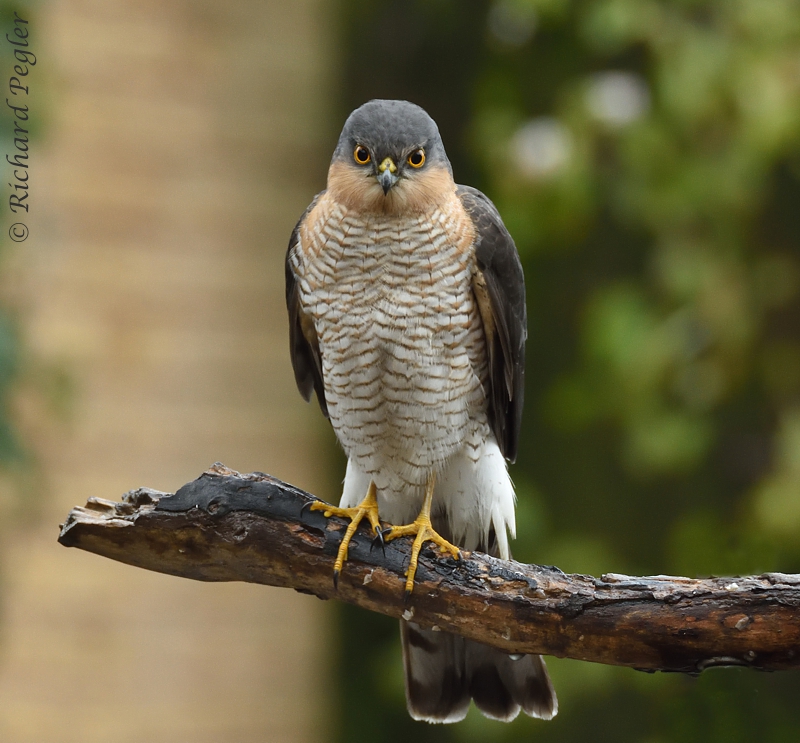 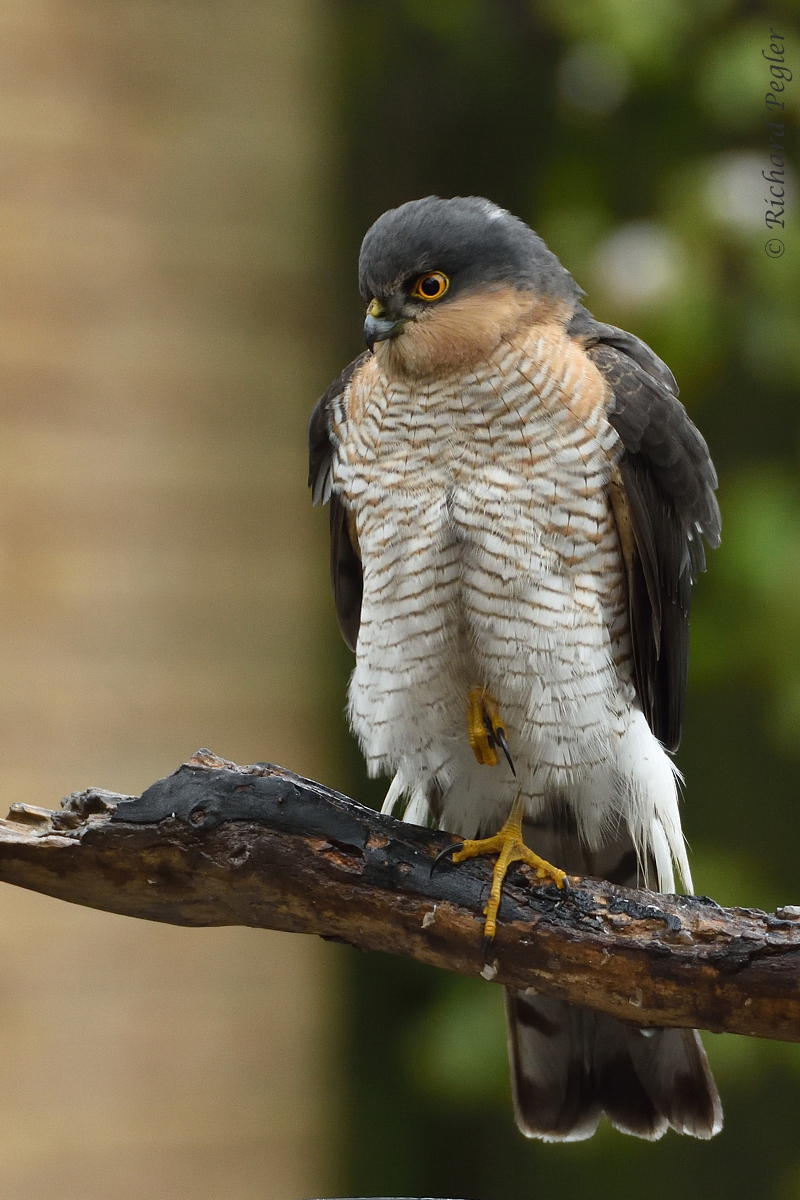 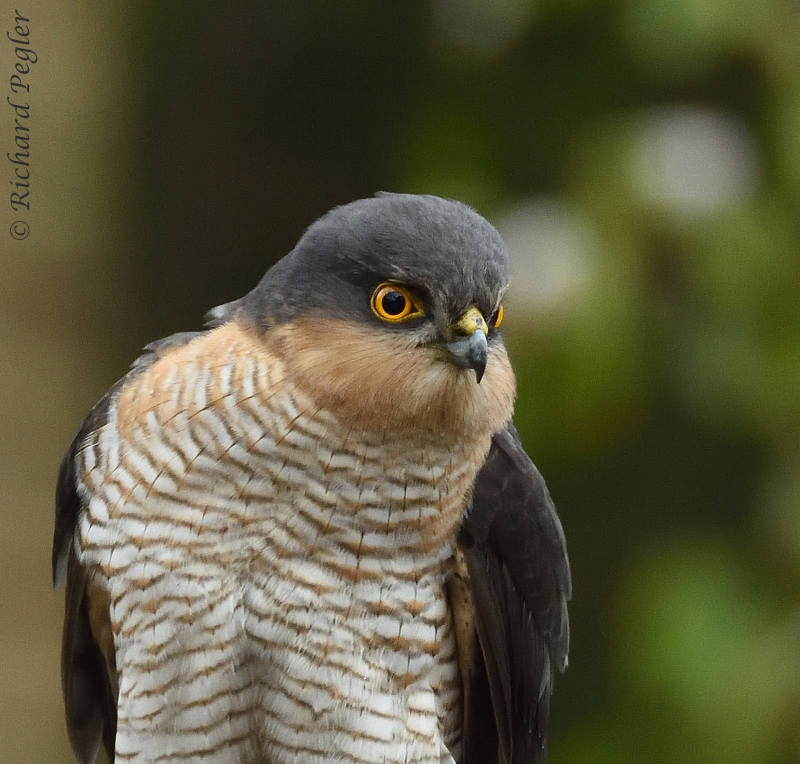 The last visit of the day that I photographed was when it stayed at the top of the garden for a while. Not the best of images, but at least I didn't have to give it a tight crop!

The result of all these visits is that many of the smaller birds have now deserted our garden, and so the Sparrowhawk has too!

Thank you for dropping by. I think that I might be offering some owls for my next post - it's not been a bad month.

Email ThisBlogThis!Share to TwitterShare to FacebookShare to Pinterest
Labels: Sparrowhawk

We've had some very disappointing weather for the past few weeks, with wind and rain making the suddenly cold temperatures seem even colder. I was, therefore, delighted when Sunday dawned sunny and bright, with just a gentle hint of a breeze. Although I had a whole raft of problems and chores to sort out, these were abandoned and, having made myself up a picnic, I set off into the big outside.

There'd been a report of three Waxwings in Loughborough, a town only about 15 miles (25 km) from my home, but as these were in the middle of the shopping area, and with parking charges to pay, I decided against this. Instead, I elected to go to the picturesque village of Lyddington, about 50 miles (80 km) from my home, where six or more Waxwings had been reported.

Whilst these birds were high on my list of 'wanteds', my priorities lay with the Little Owls and so several LO sites would be visited on the way to Lyddington. This, as you will see later, was nearly a bigger mistake than it turned out to be!

The first site that I saw an owl at, was my LO site No.41.  This was particularly pleasing as I'd not seen an owl here since 19th August, and I believe John last saw one sometime before that! I spotted the owl from over 100 metres away but, as I drove down the road, I realised that it was well tucked into a Hawthorn bush and I wasn't going to be able to photograph it from the road. Fortunately I was in my 4x4 and so drove into the field (I have the farmer's blessing to do this, but rarely do so). I banged off a few shots and then retreated, leaving the owl undisturbed (the owls are used to the farmers rounding up the sheep with their 4x4).

A little further on, at my LO Site No.23, an owl was out on its favourite RSJ. I'd only just started photographing this when the farmer arrived with his tractor to collect some bales, and sent the owl scampering up the RSJ to behind the cladding.


The next sighting was at my LO Site No.34. Although we'd seen a bird here on 28th October, we'd been getting worried that these owls might have been evicted yet again, as we'd seen that the nest opening had suddenly been filled with sticks when we visited here on 10th November.

No further owl sightings were made on my way to Lyddington. I arrived, and parked on the main road and, as I got out of my car, two ladies with binoculars got out of the car in front of mine. They turned out to be novice birders who lived in the village, and were not sure of what they were looking for. I quickly picked up six Waxwings about 90 metres away (thank you, Google Earth!) in the top of a tall tree behind a bungalow, and pointed them out to the ladies. I hurriedly tried to find closer access but only could cut the distance down to about 70 metres. The birds were looking restless and indeed, only four minutes after my arrival, they flew up high and headed south at 12h41.

Here's a few from those few minutes. 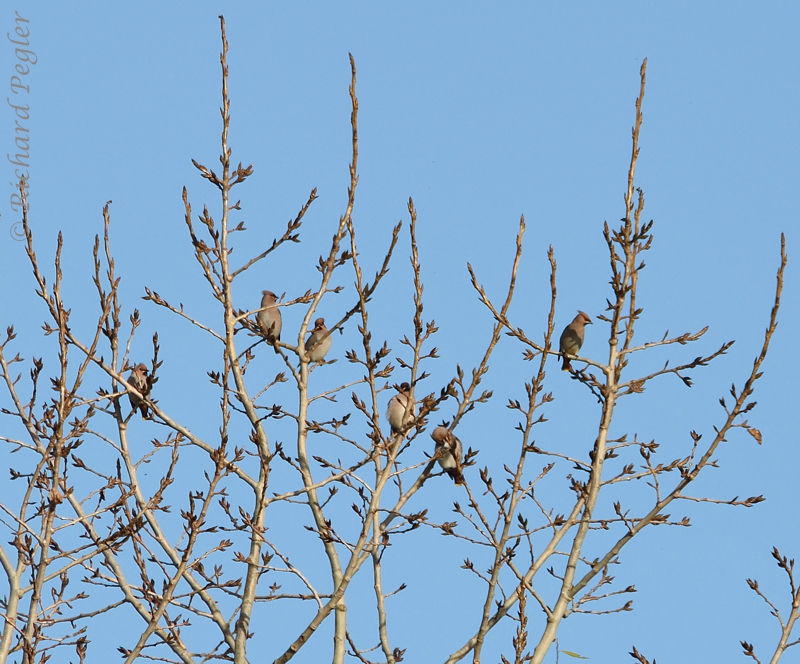 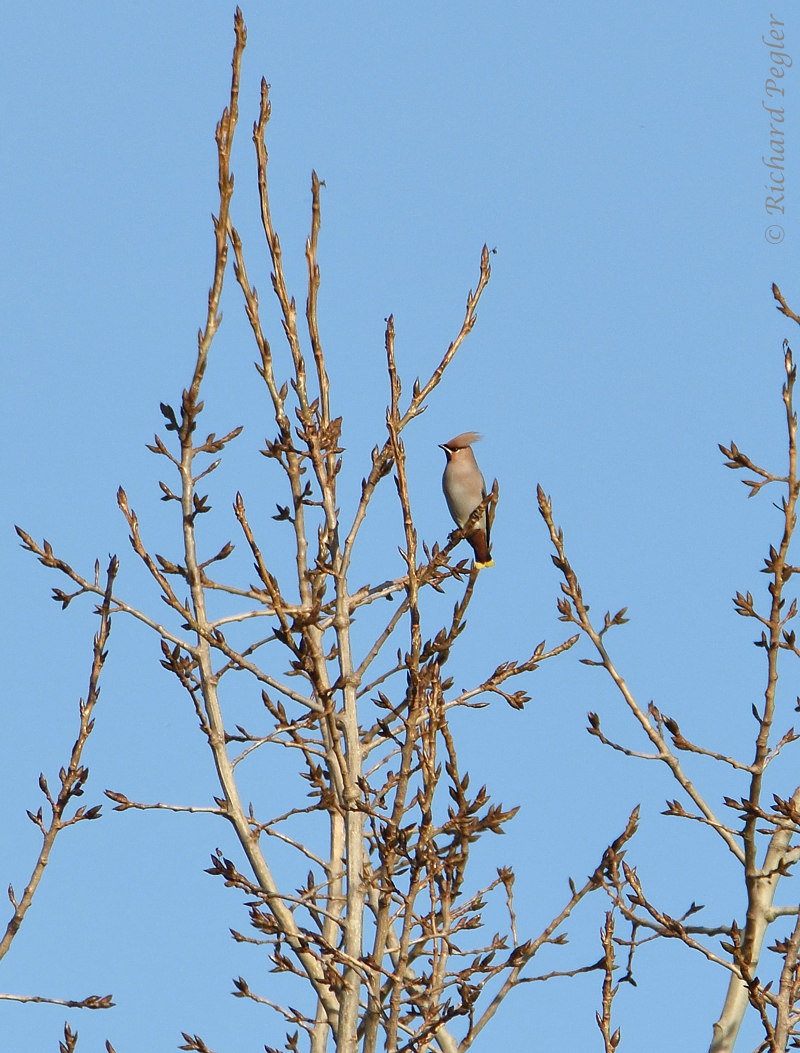 I went off to see if I could find where they might have gone, although it did look as if they were completely leaving the area. This thought was reinforced by a person arriving and telling me that, earlier in the day, the birds had been roosting in a tree opposite where my car was parked, and feeding in a Yew tree about 5 metres from where my car was parked! He was surprised to hear that they'd been in the distant tree, which suggests that the birds had gathered there with departure in mind.

I didn't give up until an hour after the birds' departure, and I was pleased to see a Small Tortoiseshell butterfly flying around high up against the church walls. Eventually it settled and I managed a long distance shot. Although, at a glance, it looks as if this was in tatty condition, it was, in fact, in almost perfect condition - it was the church walls that were in rather poor condition, with protrusions covering the butterfly's wings!

From Lyddington, I went on to Eyebrook Reservoir. I stayed a while at the inflow, hoping for a sighting of Kingfisher, but my luck was not in, so I started back homeward after about an hour.

Near Allexton I spotted a Buzzard up in a tree and, surprisingly, it didn't take off the instant that I stopped the car. Sadly it had its back to me, but I did get some reasonably close shots. 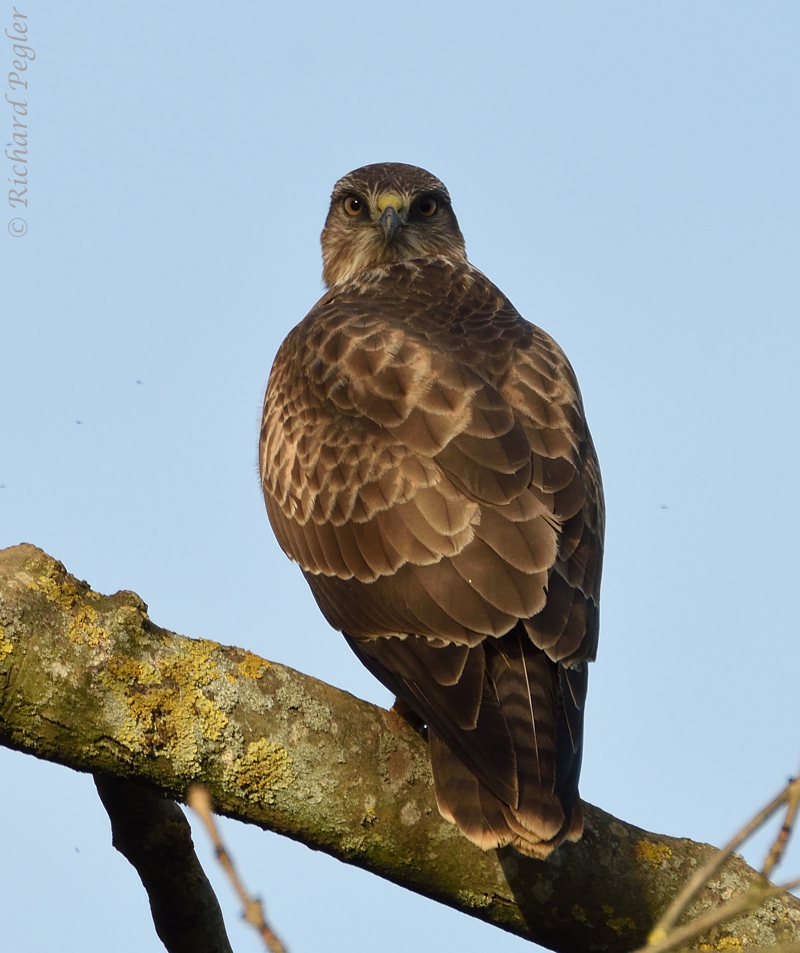 Both owls were in the nest opening of Little Owl Site No.34 again, when I passed at 15h11. Here's a shot from a different angle to that taken in the morning. Depending on your screen, you might just be able to detect the eyebrows of the second bird, to the right of the first bird!

The owl was also out on his RSJ again at Site No.23.

After I'd set out that morning, I'd found John's notebook on the floor in my car, so I headed home via John's place to give it back to him. As I departed from John's, I had the idea to try and push the numbers of owls sighted to five (it's been a long while since I had a five-owl day!), by calling in at my local patch to see if, by any remote chance, I could detect the silhouette of an owl on the roof at my LO Site No.02.

I didn't have any luck in this respect but, just a few hundred metres further along the road, a ghostly white apparition crossed the road ahead of me. I stopped the car and got out to search the adjacent field through the bins. I'd just about given up when a Barn Owl flew up from the corner of the field beside the road behind me, and continued down the road. Fabulous !!! I'd had a five-owl day, and my first sighting of a Barn Owl in far too many months.

It might not have been the best of days photographically, but I'd had an extremely enjoyable day out in beautiful sunny weather - and had my first Waxwing sighting of the year. Brilliant!