My wife and I, together with our daughter and granddaughter, had a week based in a beautiful thatched cottage, near Lyndhurst, in The New Forest, Hampshire. My account of the bulk of this holiday will feature in a future post. This current post will be concerned with one very special day I had during that time.

Whilst this was a family holiday, I'd done some research into the dragonfly possibilities in the area. My two main sources for this research were the book 'The Dragonflies of Hampshire' by Tavener, Cham, Hold et al., and the excellent and informative website of Paul Ritchie which you can find here:- www.hampshiredragonflies.co.uk. During this research I'd noticed that Paul offered guided days looking for dragonflies, at very reasonable prices.

Having agreed the idea with my ever-considerate wife, Lindsay, I contacted Paul to ask about the possibilities for using his services. Paul replied to say that he was free for the whole week I was in the area, and asked what my target species were. I gave him a list of nine species that are not found within a 50 mile (80 km) radius of my home, but which can be found in Hampshire. One of these I realised that I was possibly too late in the year for, so the list was, in reality, only eight species long. Paul replied that there was one site where five of the species on my list could probably be found, but that to find the others it would mean travelling further afield to other sites.

It was very reassuring that Paul was flexible about on what day our session would be. It was agreed that we'd target Monday 17th July, but that we'd leave Sunday to Wednesday open and switch days if the weather forecast suggested otherwise. In the event, Monday seemed favourite.

Paul had stated to me that wellington boots was virtually essential for the day, and this indicated to me that I was in for a novel experience. Except for the occasional accidental slip, my past dragonfly hunting, being beside lakes, ponds, bogs and rivers, had largely left me with dry feet!

Just to complete the picture, the target species that I had given Paul were:

NOTE:- As Paul derives some income from his guiding, I am not disclosing the whereabouts of the two locations he showed me, although they are publicly accessible, and information on them can readily be found.

I met up with Paul at a parking spot a few minutes before 10h00 and, after taking a couple of minutes or so to sort ourselves out, we strolled across the road to a nearby stream. By 10h15 we'd seen all five of the target species for the location and I'd obtained reasonable photos of four of them. Here's some of them, together with the time the image was taken - Small Red Damselfly, although seen in that period was not acceptably photographed.

We spent another four hours at this location, criss-crossing the stream and sometimes standing in it - yes, those boots were essential! Here are some more images from the first part of the session.

We were seeing plenty of male Beautiful Demoiselles, and the effects the light had on them was fabulous. 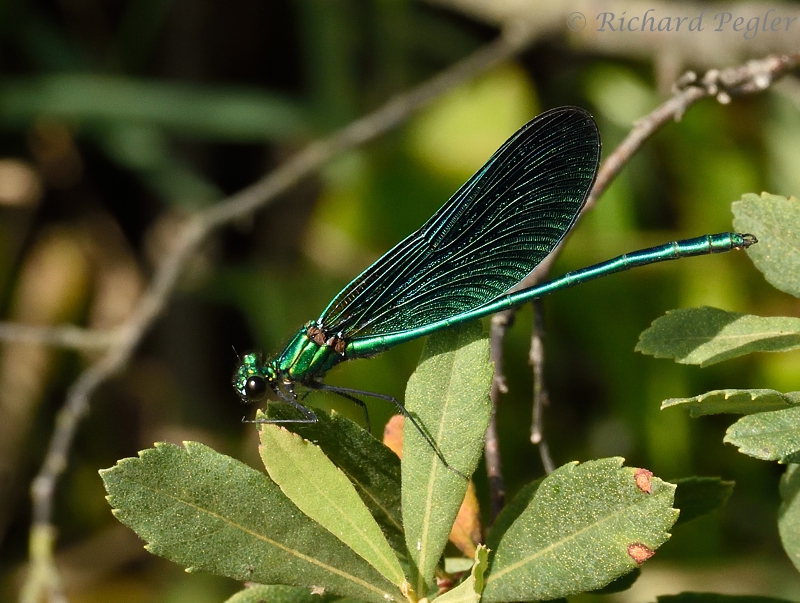 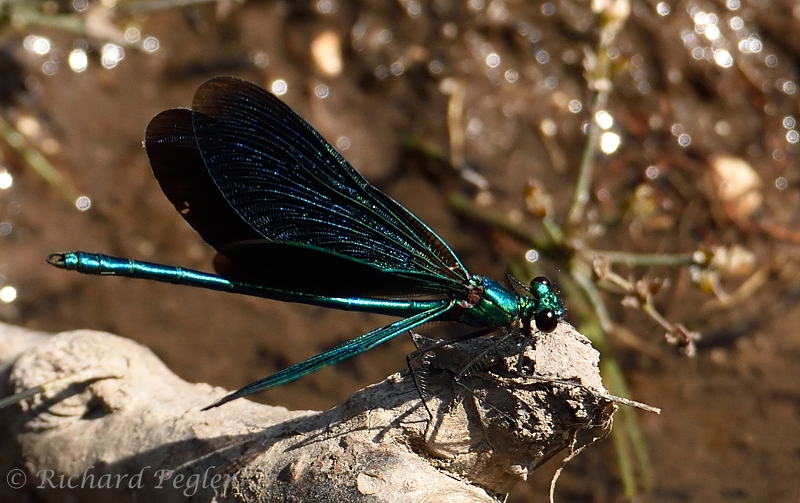 I paid rather more attention to the Golden-ringed Dragonflies than perhaps I should have done. This was due to an attempt to find a female of the species. I was pleased to get a flight shot - even if it was a poor one! 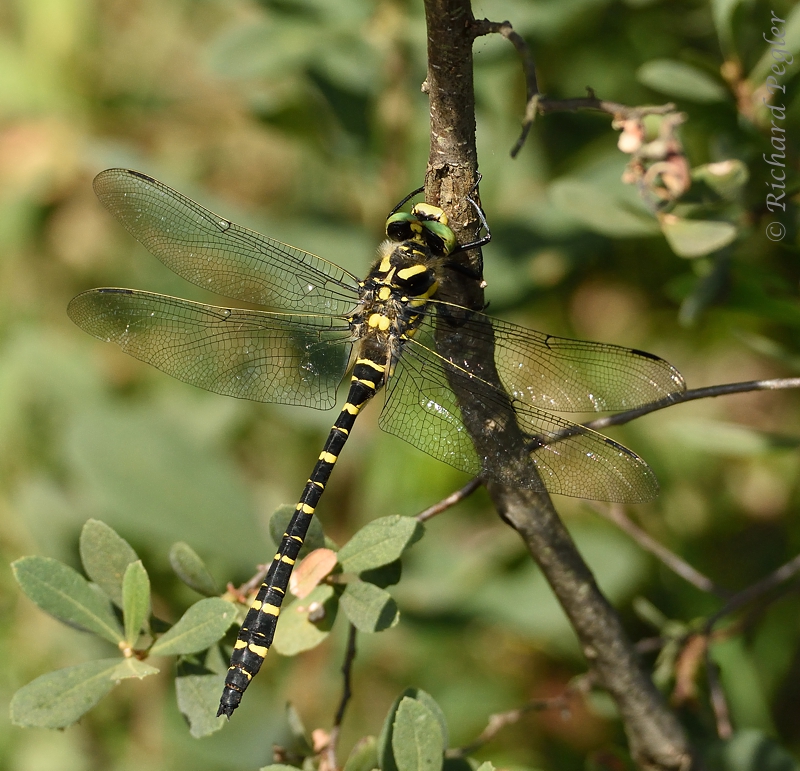 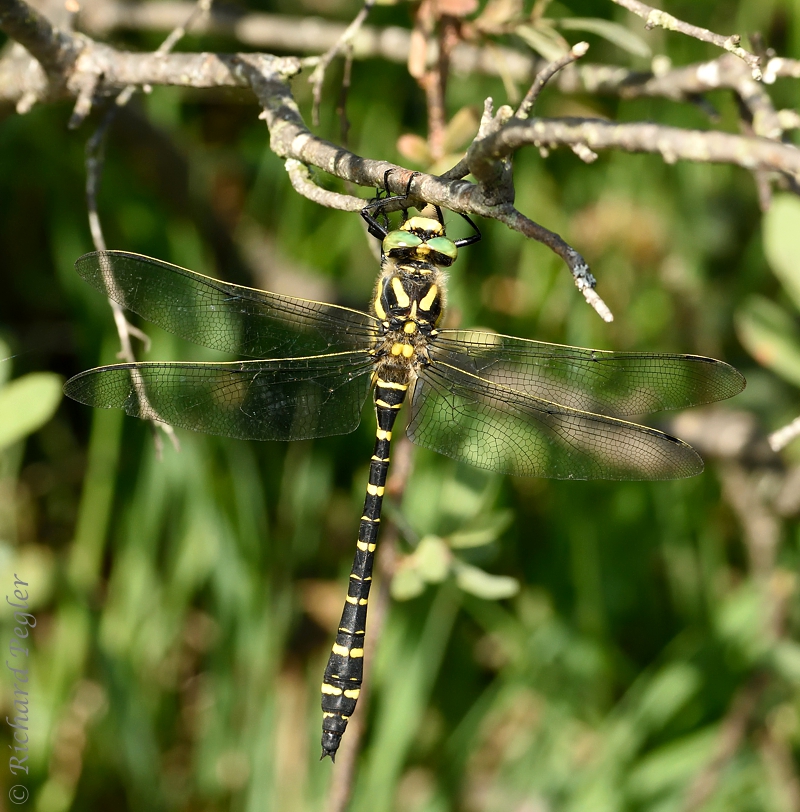 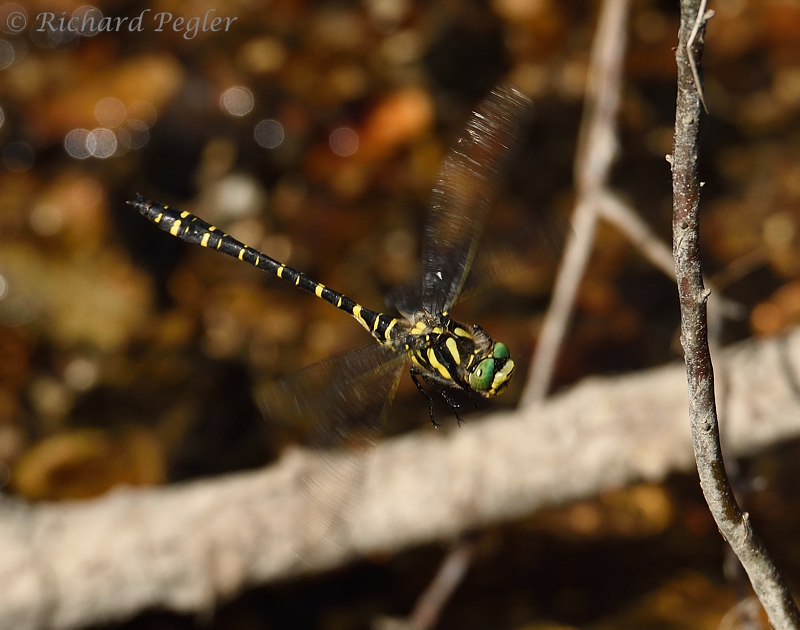 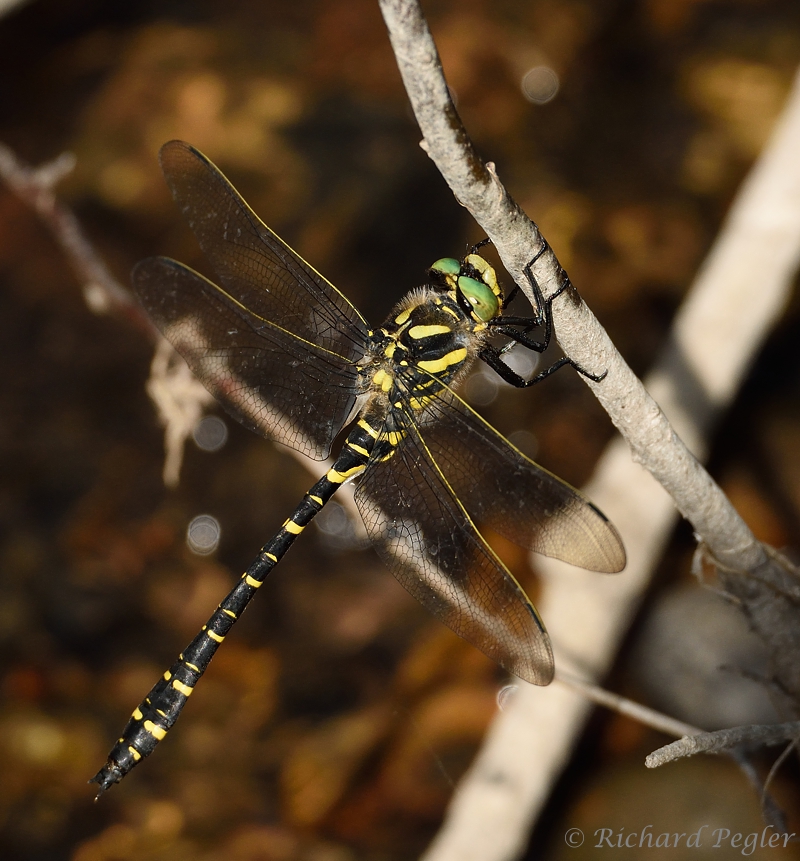 Although most of the Golden-ringed Dragonflies seemed to be in good condition, the same could not be said for the Keeled Skimmers, many of which looked as if they had led a rather hard life. The second one, below, looks as if it had been bitten on the abdomen by a bird. 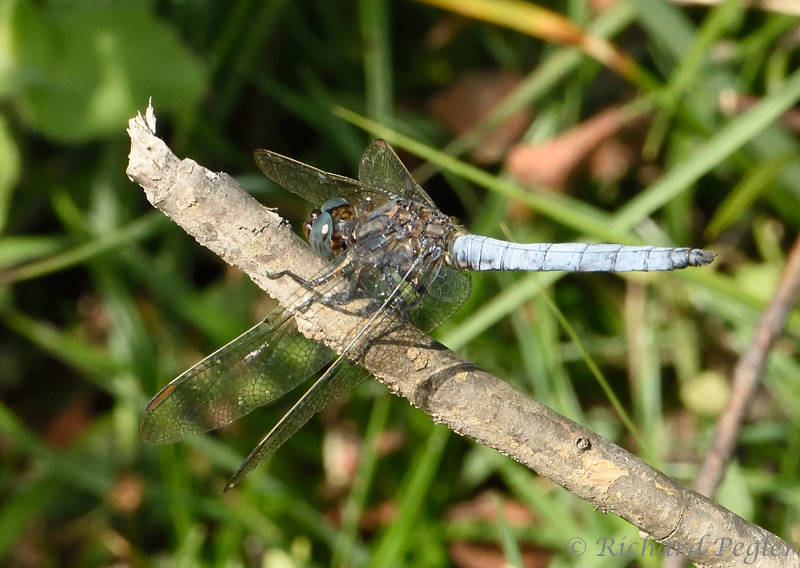 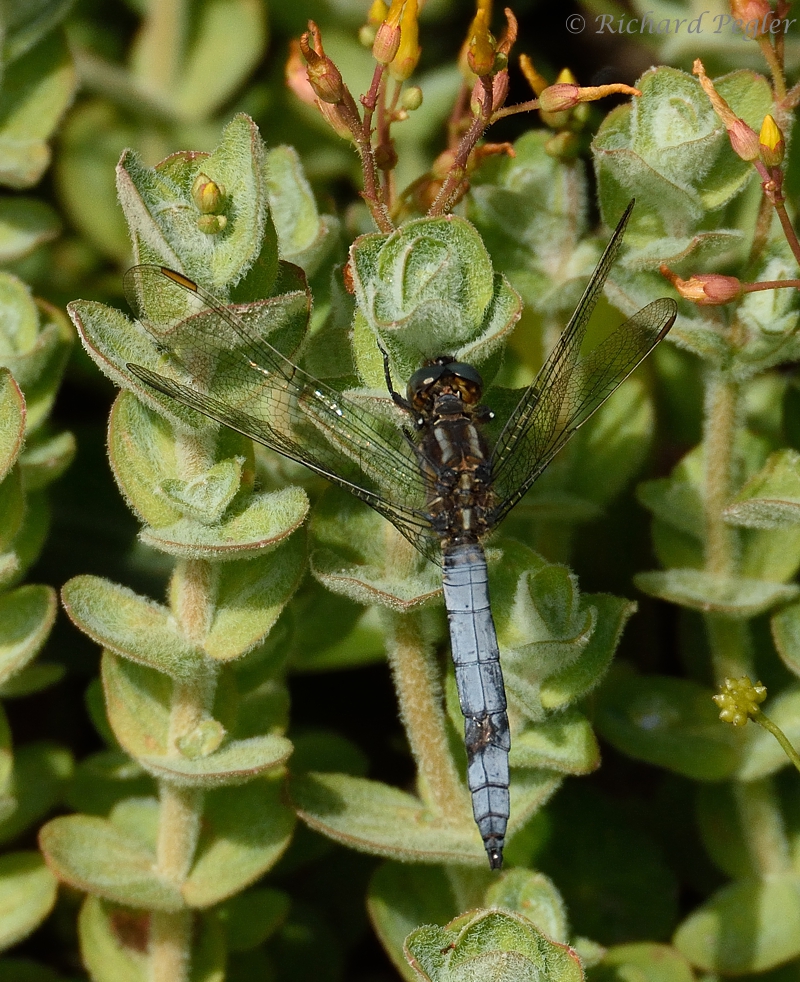 As I have found to be quite normal when looking for dragonflies and damselflies, it is usually more difficult to find females of a species than it is to find males. This is because females tend to hide away and only appear when it's time to mate or oviposit. The other time that they are most visible is when they have just emerged from the nymph stage. As the morning continued it got warmer, and the breeze dropped. This seemed to bring on the mating urge (not in me, I hasten to add!). We started seeing more pairs in tandem or mating.

Here are a pair of Small Red Damselflies mating.

About halfway along our travels we came to the place where the stream passed through a shallow pond. Here, an Emperor dragonfly was patrolling. We took some time in trying to photograph this individual. At first I just seemed to get distant going-away shots, like the one below.

However, I soon managed to get my eye in for a few somewhat better shots, although there's plenty of room for improvement! 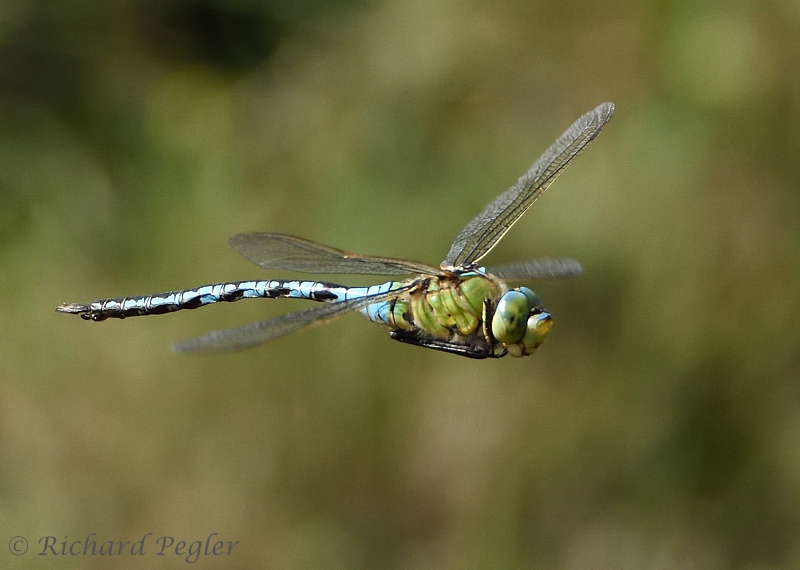 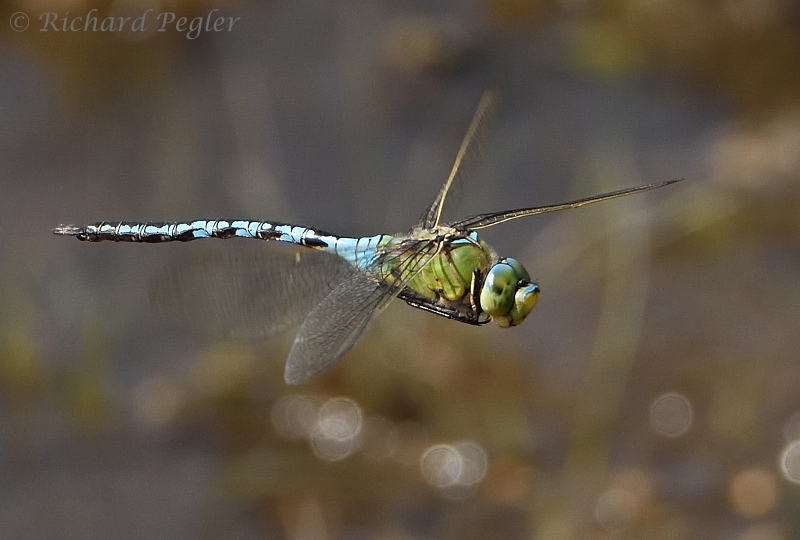 After this session we carried on up stream and found the same mix of species, with more photo opportunities. The teneral female Keeled Skimmer seemed very ghost-like from a side-on point of view! 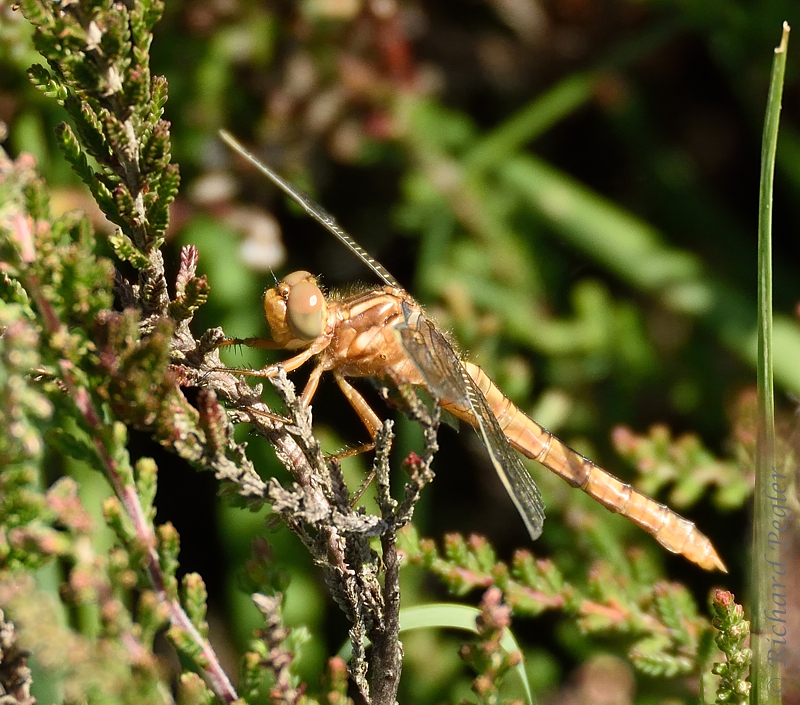 The mating game was still in progress.

Whilst not a good photo, I'm including this next image as it shows the blue variation of the female of this species which I understand to be relatively uncommon.

I also messed up with this next image, getting the end of the abdomen out of focus, but it was the first female Beautiful Demoiselle that I've photographed.

Although Common Darter is by far the most common dragonfly that I see near my home, I could not resist this beautifully presented mating pair.

Prompted by mention of Silver-studded Blue butterfly we left the stream and headed up into the heather. First to be found, however, was Dark Green Fritillary. 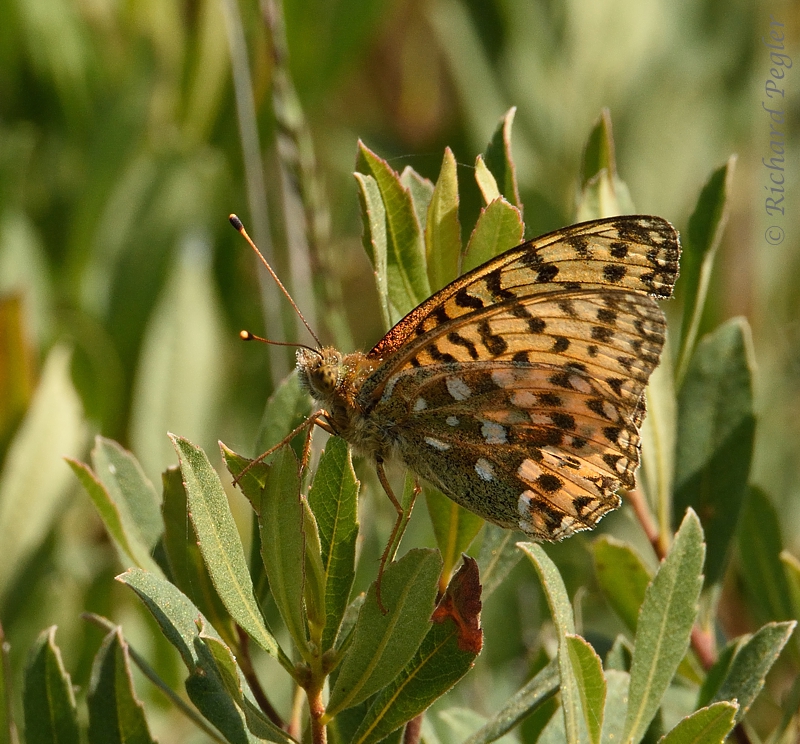 It was not difficult to spot the male Silver-studded Blues, however. We saw several of them, but finding a specimen that was not battered was a different matter! 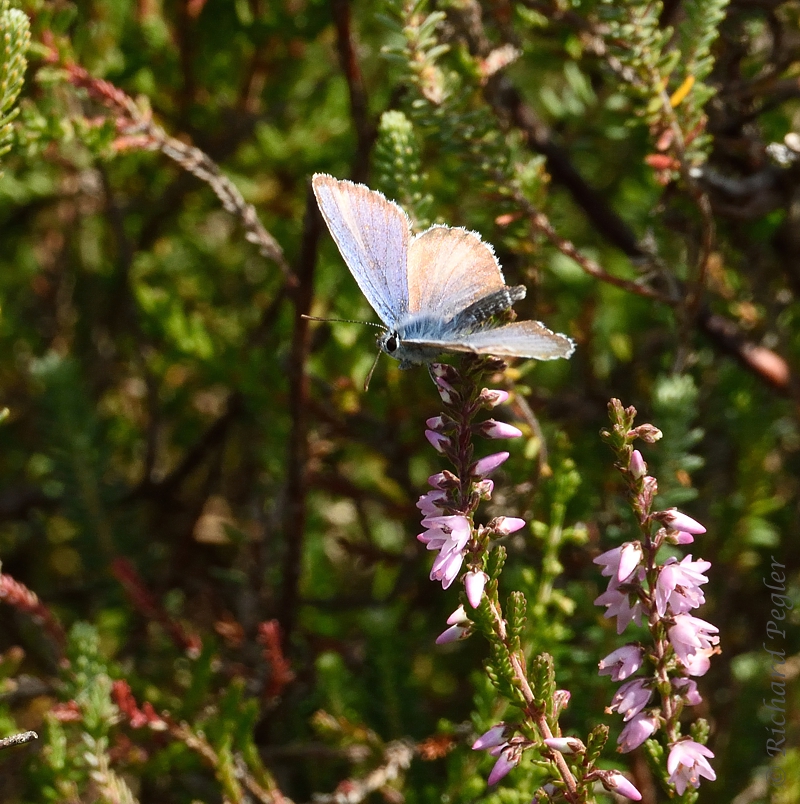 I don't think I ever did find a female of the species in good condition.

Venturing away from the stream also gave us other opportunities with dragons and damsels.

The female Keeled Skimmer is a stunningly beautiful dragonfly, with subtle golden tones. 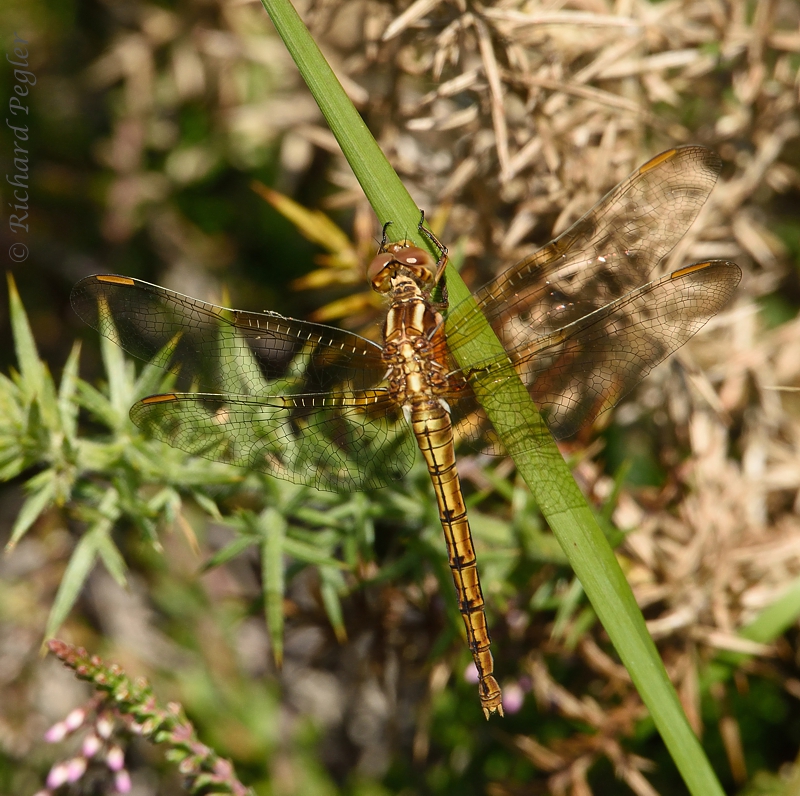 This next Keeled Skimmer had me consulting the internet. The dark blue suggested a very mature male. The golden segments at the start of the abdomen suggested a female. I'm now confident through closer examination of the tail-end of the abdomen that it's a male. To my mind it looks extremely handsome.

The next image is not good, but the best I managed of a pair of Southern Damselfly with the more usual green female.

We returned to the pond where we'd had a session with the Emperor, and made a few more attempts. However, my arms were getting tired (as was the rest of me!) and I wasn't having much luck, so decided it was time to tuck into my picnic lunch. I'd no sooner finished it when I suddenly went weak and dizzy, broke into a cold sweat, and had other strange sensations which I won't go into here. I now know I'd had a 'postprandial hypotension'. This is when the system decides that the stomach area needs more blood, and diverts the pressure from the brain. The problem was probably aggravated by my having spent much of the morning bent over taking photographs. I'm afraid that I caused Paul much concern, but was compus mentis enough to assure him that it was nothing serious and I'd be OK soon. I don't know how long the episode lasted for but I suspect it was only 5 to 10 minutes with me spending most of the time flat on my back with my hat over my face. Just as quickly I was as right as rain, and completely refreshed, so we were on our way again, and headed back towards the cars.

At one point I was trying to photograph a Golden-ringed Dragonfly when it was photobombed (I hope I've got the right expression in modern parlance?) by a Beautiful Demoiselle.

I forgave the Demoiselle, however, when it settled in front of the Golden-ringed. Sadly, I could not get the two in the same focal plane without leaves partially obscuring the Demoiselle.

The Beautiful Demoiselles seemed to be getting more active.

We were now seeing more female Beautiful Demoiselles, and I managed some images with the abdomen in focus. Notice that the specimen in the third image, below, has folded her wings all on one side of the abdomen, rather than a pair either side. I've not noticed this happen before. 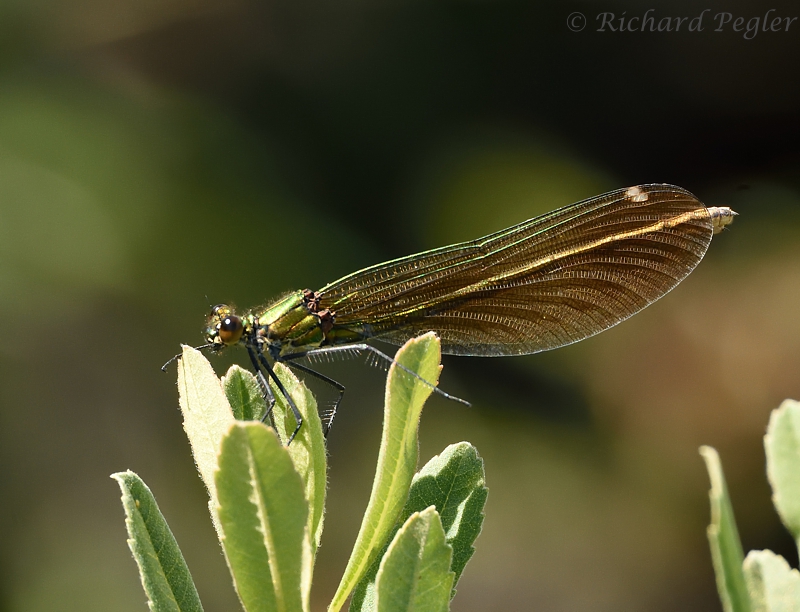 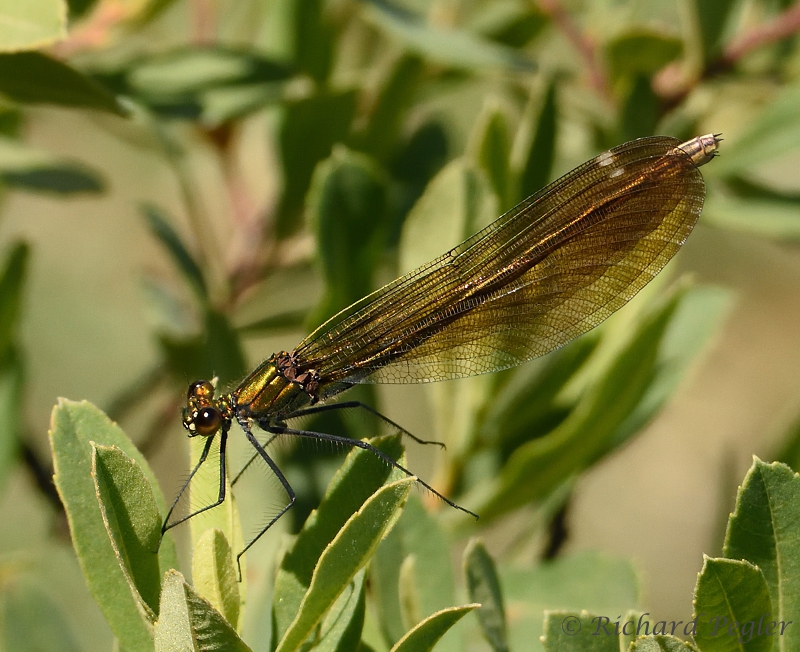 Right next to the road, before we reached our cars, we found that Silver-studded Blues had appeared there too.

My day with Paul was now over, but Paul said he would show me how to get to a place where I might be able to find Black Darter, if I cared to follow him. We stopped at a place I had parked at in 2016. However, he pointed out a different location to the one that I had visited that year. When I said to Paul that I'd check it out immediately, Paul offered to accompany me for a quick visit.

We were soon seeing Silver-studded Blues again as we headed over the heather. This female was relatively intact.

When we reached the pond, I was the first to spot what Paul confirmed was a Black Darter. We lost it over the heather, however. Soon we had another male of the species.

We continued looking, and I did stop to take a shot or two of Emerald Damselfly, although these are rather common at home. The shortfall of the pruinescence suggests to me that this is a relatively new specimen.

Further searching uncovered, away from the water, what we believed at the time to be two female Black Darters. However, these turned out to be immature males. 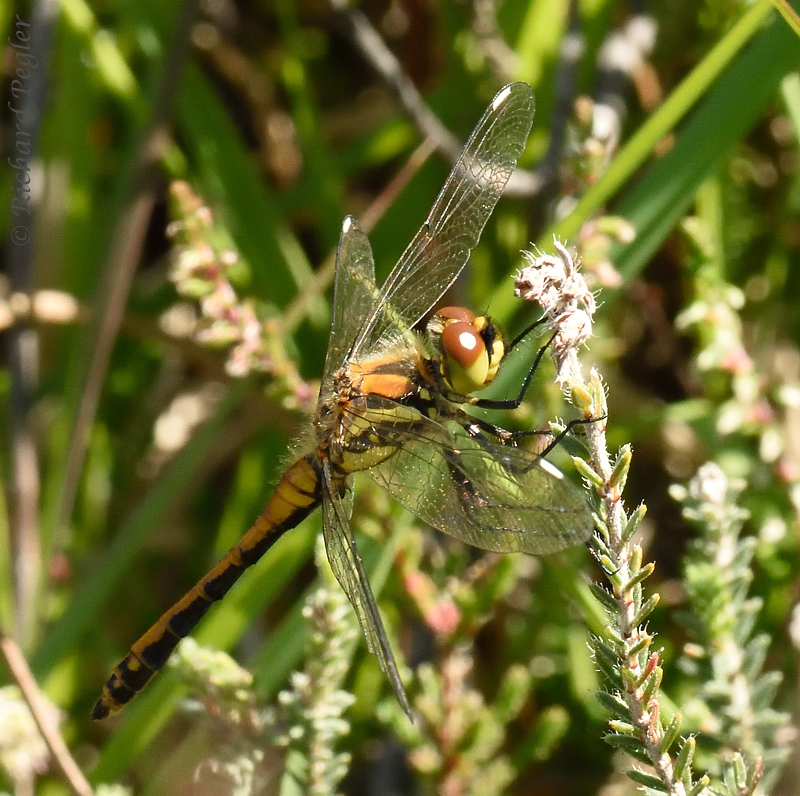 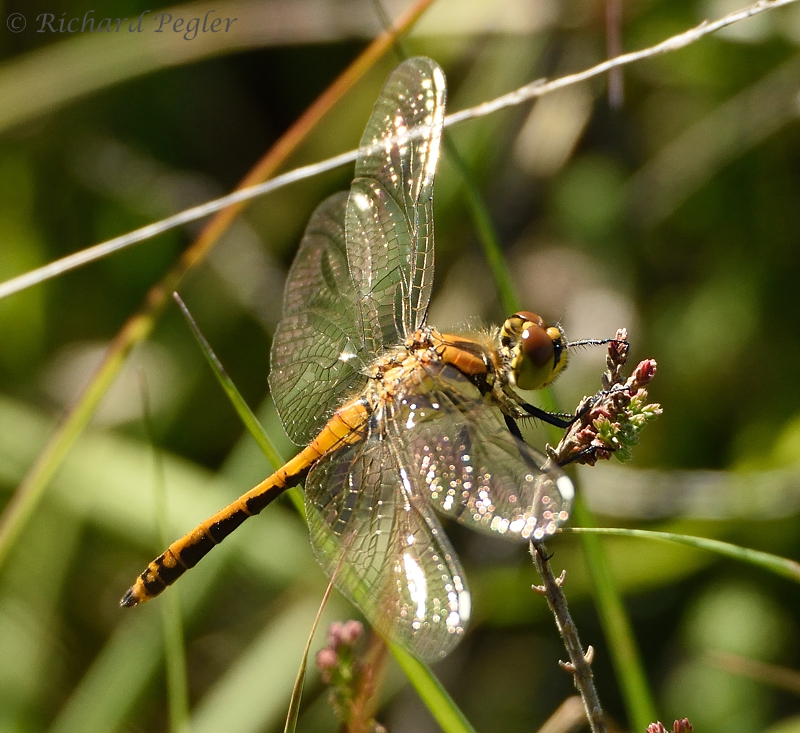 It was time for us both to call it a day, and head home. The only things that we could possibly say that we'd missed were female Golden-ringed Dragonfly and female Black Darter, but the day had massively exceeded all my expectations.

This had been, without any shadow of doubt, the most enjoyable and rewarding day dragonfly hunting that I have ever experienced. Paul was an absolutely marvellous guide, and a real pleasure to be with. Thank you, Paul for a wonderfully memorable day!

My thanks to my readers for your visit. The length of this post has been a measure of how much I got out of the day. However, I promise that the next post will be considerably shorter!

The weather (the best we'd had all week) had helped the success of this day immensely. With the weather we've been experiencing most of this summer so far, one tends to cast one's mind back to those sultry summers of past years. For me, there's one piece of music which evokes such memories :-