On 31st January I set off for an eight-day visit to Charmouth, in Dorset. The objective was a mix of birdwatching and fossil hunting. There was some trepidation when I departed as the weather forecast was not good, with a lot of rain and high winds expected. Because of the preceding weather and high tides, the prospects for fossil hunting, however, were above average, due to the scouring action of the sea.

I'd booked myself into self-catering accommodation in Charmouth (Mrs P wasn't with me as she stayed at home to care for our ageing cat), but with no intention of doing any cooking as the George was only a few metres up the street from where I was staying. It rained virtually solidly all the way to Dorset.

On arrival, I went to explore my surroundings. My first discovery was a sign outside the George to say that their kitchens were closed for two weeks for refurbishment. At least there was a recommended fish and chip cafe a couple of hundred metres further up the road - only open Thursdays, Fridays, and Saturdays for the winter season (even for takeaway!)!

As it was a Friday, I at least had the opportunity to try the fish and chips, although the place seemed quite expensive. This decision turned out to be a mistake. The first five attempts to order something from the menu resulted in the response "sorry, we haven't got any". I ended up with calamari, which was overcooked and served luke-warm, and a bill for just under £10 - and all I had to drink was a can of pop!

Anyway, to cut a long story short, I ended up cooking each evening, and taking a picnic lunch each day.

Because of the way the tides fell, I'd planned to mainly fossil hunt in the first half of my stay, and go bird-watching in the second half. I hadn't counted on the combined effect of the winds and high tides reducing access to the beach quite as much as it did do. The odd freak wave meant that I got the lower half of me soaked on many an occasion. I'm very much a novice fossil hunter, but Charmouth attracts the hardened and professional collectors and as well as getting extremely wet by wanting to access the beach before anyone else could, these were also taking risks to life and limb on cliffs that must have been rendered unstable by the recent weather. They were also getting plastered in mud, I kept at a safe distance! This meant that they got the good stuff, and I picked up the dross.

Come the Tuesday, it was time to switch to birdwatching, but it was a windy day with rain forecast, so I didn't bother. Wednesday 5th February was the day that the South-West took a really bad battering from the wind and sea, and I witnessed things that I wasn't expecting in that neck of the woods. The realities of the force of nature and the stupidity of man were brought home to me big-time!

The weather forecast on Thursday morning was for high winds and torrential rain all day, so I decided that enough was enough, and set off home at around 11:00, a day early.

So that is why I went quiet at the beginning of the month, and since then I've been spending quite a lot of time, between catching up with the chores, preparing fossils. A lot of the Charmouth fossils are pyritised and, unless they are specially treated, liable to decay to nothing over time.

My apologies if I have neglected your blog over the past couple of weeks or so, but the above is the reason why. I'm now hoping to catch up!

I can't do a post without some reference to owls/birds/nature, so here are some 'Owling Incidentals'

Whilst out owling after gale conditions, I went to check that a particular barn was still standing. It was, and a Kestrel was perched on a beam, as shown in the next image. The image, itself, is not remarkable, but I also have photos of Barn Owl and Tawny Owl perched within six inches (15cm) of the Kestrel's position which, to me, is remarkable!

Another unremarkable image for its quality, but one that had me worried for a while. Earlier this year, whilst owling on my 'local patch', I found this Peregrine with its prey in the middle of a field. The worry was that one of my Little Owl sites was in the field immediately to the north of this field, and another in the field immediately to the south-east. I'm pleased to say that both sites are still intact, and the Peregrine has not been seen since.

The following day, whilst returning back to base with my pal Titus after an afternoon's owling, there was a superb rainbow as the sun was setting. I believe that the low height of the sun is the reason for the rainbow meeting the ground nearly perpendicularly. It certainly gave a golden glow to the surrounding scene.

In mid-January, as I started a morning's owling, I found this. Answer as to what it is at the end of this post!

In late January, whilst out with Titus again, we came across this Kestrel. It stayed for a while but, unfortunately, kept its head towards us for the whole time. 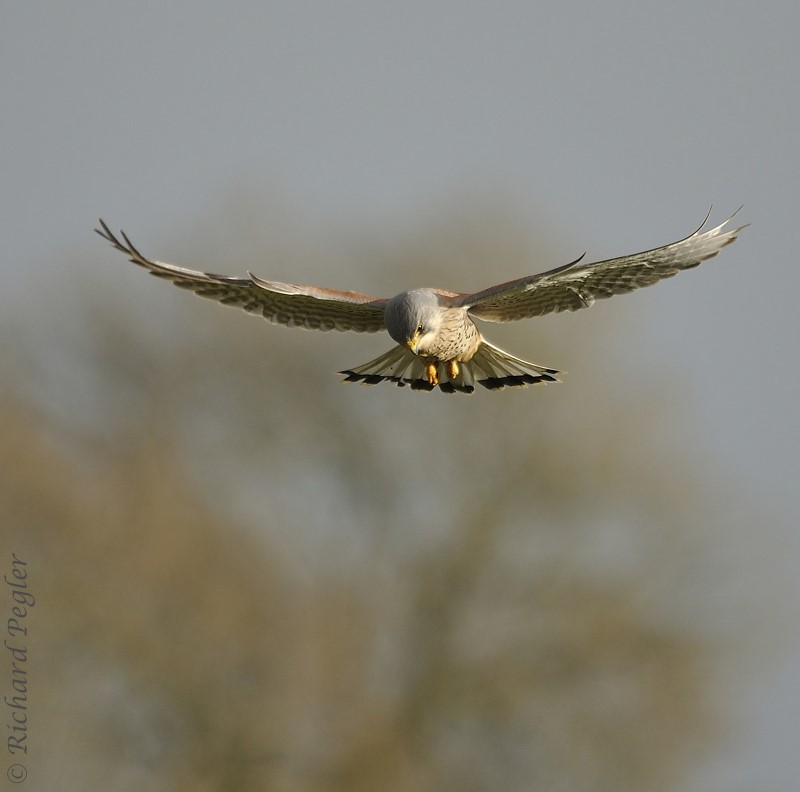 Lately, the weather has been evil over much of UK, and whilst we have escaped most of the flooding (plenty of water on the roads, but nothing impassable with a bit of care), it has affected the owling opportunities. However, it seems that the owls are getting used to it and the past couple of times I've been out when it's been rather windy I've had a nine-owl day and a seven-owl day. I've also managed one or two images, so these will probably feature in my next post.

The mystery image - the ice on the outside of my car windscreen taken from inside the car before I de-iced it and set off owling on an eight-owl day.
Posted by Richard Pegler at 19:03 22 comments: