I'm currently totally bewitched by the Short-eared Owl that has decided on a winter residence not far from my home. As a result, I've done very little general birding, or other owling for that matter! I'm conscious of the fact that I'm in danger of boring you with yet more SEO images, so will be striving to just include images that improve on previous results, show the bird in new poses, or are just a bit different to what I've already posted. With just one bird at this location, the opportunities are limited, although the bird is quite reliable - no-shows are, thankfully, rare. I've had plenty of visits, however, where I've not achieved anything better than, or even as good as, those already taken.

After delivery of my new Nikon D7200, and before the problem with the optical stabilisation on the Sigma 50-500 was resolved, I had a session with the shorty. One of those images, taken when the light had all but gone, I quite like.

Jumping into the New Year, I liked the curved effect of the fence as it passes over the rise in this image of the owl, taken at a great distance.

The following day, I had another session - this time in better light. The fourth image in this sequence, 'walking in the air', is my favourite! 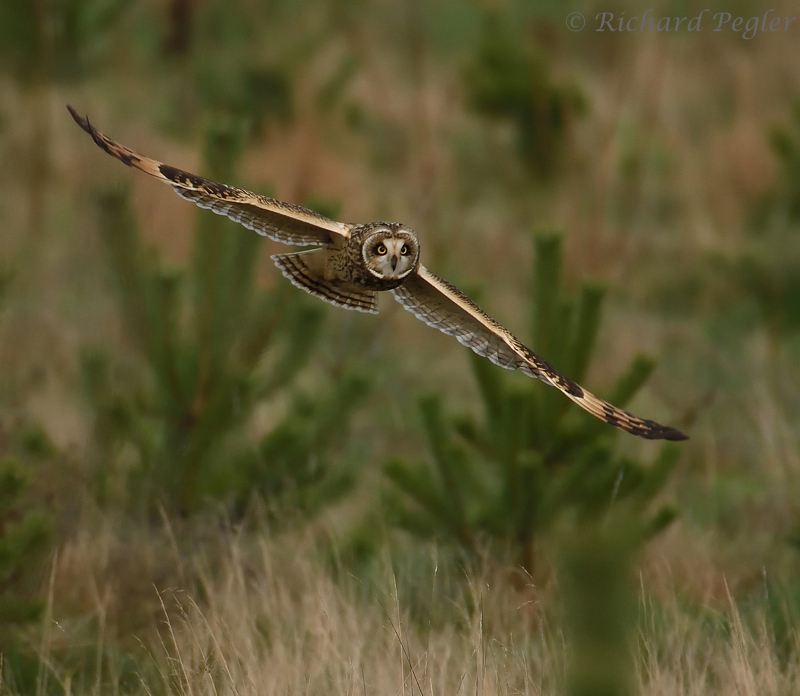 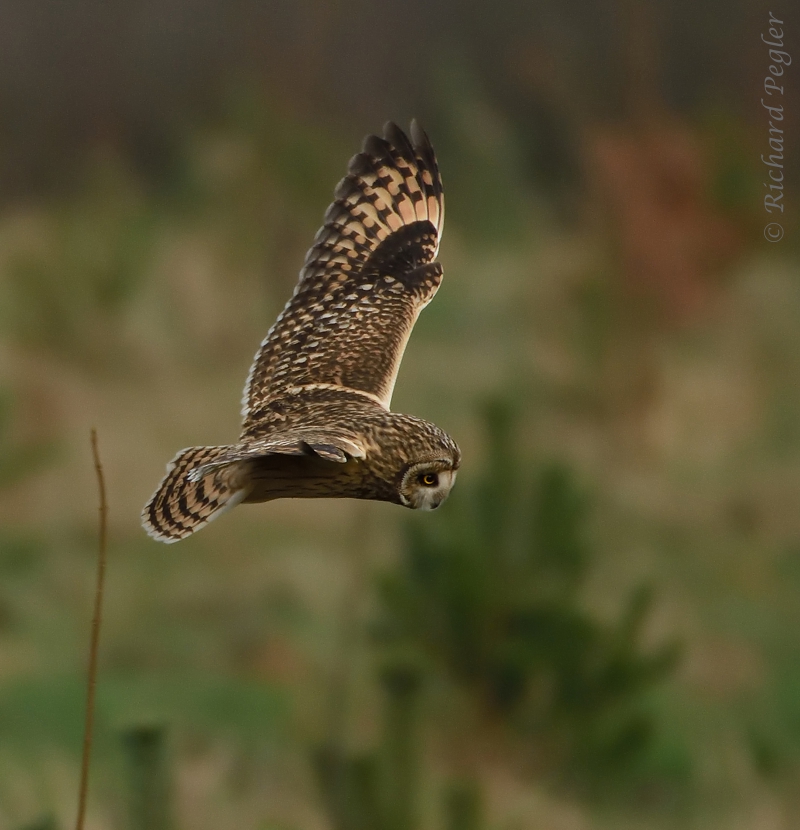 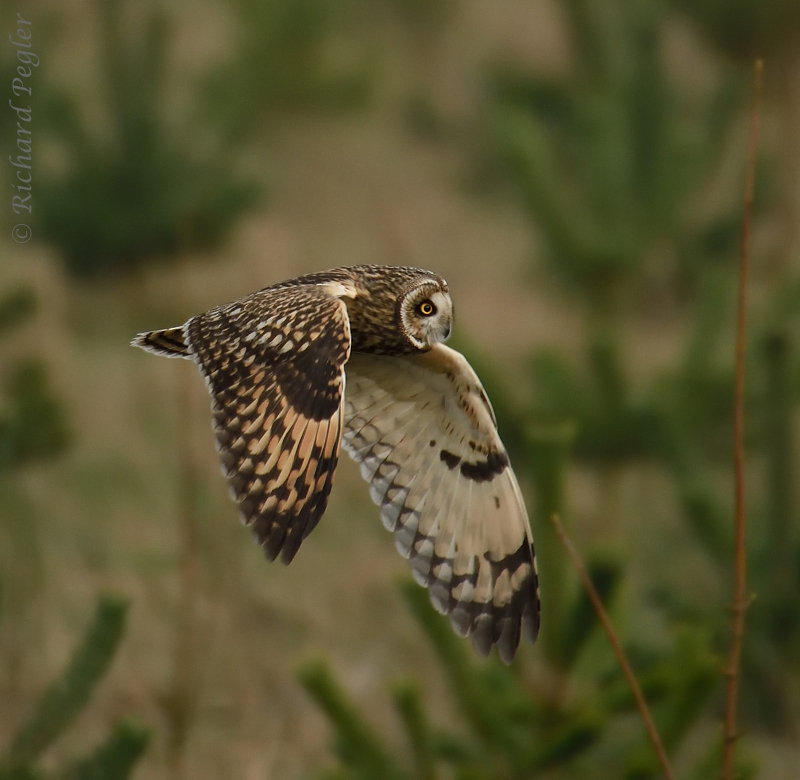 I have permission to set up my chair-hide in the plantation that the owl visits, in order to try and obtain images of the owl on a post. The secondary, lower, post that I'd erected was used by the owl the day after I put it up, but I've not seen it on there since!  I'd not had much success using the hide for a while.

On this occasion, the weather was a bit breezy, but I thought that I'd give it a go. After three hours, at 15h45 it was getting dark and I'd not seen the owl, so I decided to give up. Now, one thing that I'm very careful of is that it doesn't do to set up the hide, or to break cover at the end of a session, when your quarry can see you. The hide has a very narrow field of view in the forward direction, but has small covered openings to the side which I usually keep closed so as to not let too much light into the hide (so I can be lost in the shadows). I opened these windows to check that all was clear before emerging - and spotted the owl sitting on a fence around 70 metres away, where it could see me without any problem! I eventually just managed to see it lift off and fly over the hedge line at 16h15, and packed up and ran for cover with my tripod and hide! Here's one of it on the fence post - I got a crick in the neck taking it!

There was hazy sun on this afternoon, and I'm rather pleased with the first image, below, as it was taken pretty-much into the sun - difficult light conditions, but I like the effect of the light shining through the wing feathers. The second image was from the opposite direction - with the sun behind me. 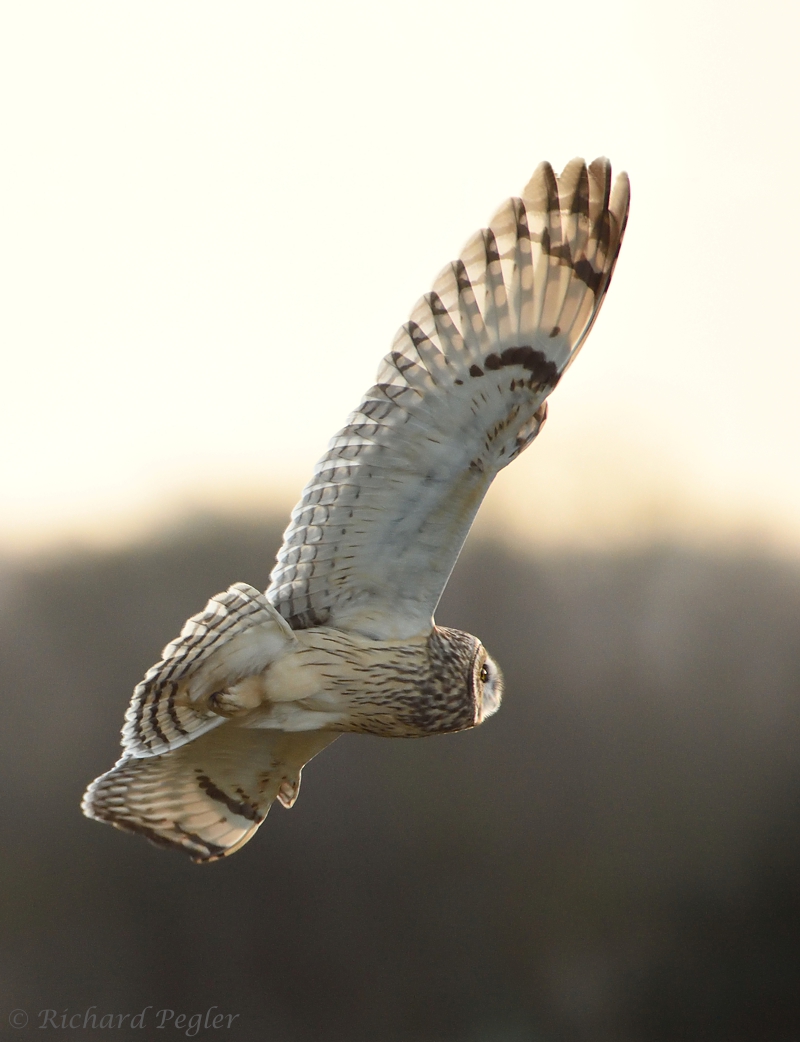 Yesterday, having had a no-show on 16th January in similar weather conditions, I was in two minds as to whether I should set up my hide. I decided to do so. I had to wait a while, but the owl then landed on the post around 20 metres in front of me. I was rather pleased with the results, although they would have been even better if I hadn't accidentally moved the white balance setting to 'cloudy' when the subject was in warm evening sun - I usually work on a fixed colour temperature of 5560 K and then, if necessary, tweak the white balance in the post processing stage. It was a lot more than a tweak I had to make with these images. I was particularly pleased to get the image of the owl with its head upside-down. It is a bit blurred as it rotated its head very quickly and my settings were optimised for a static bird. 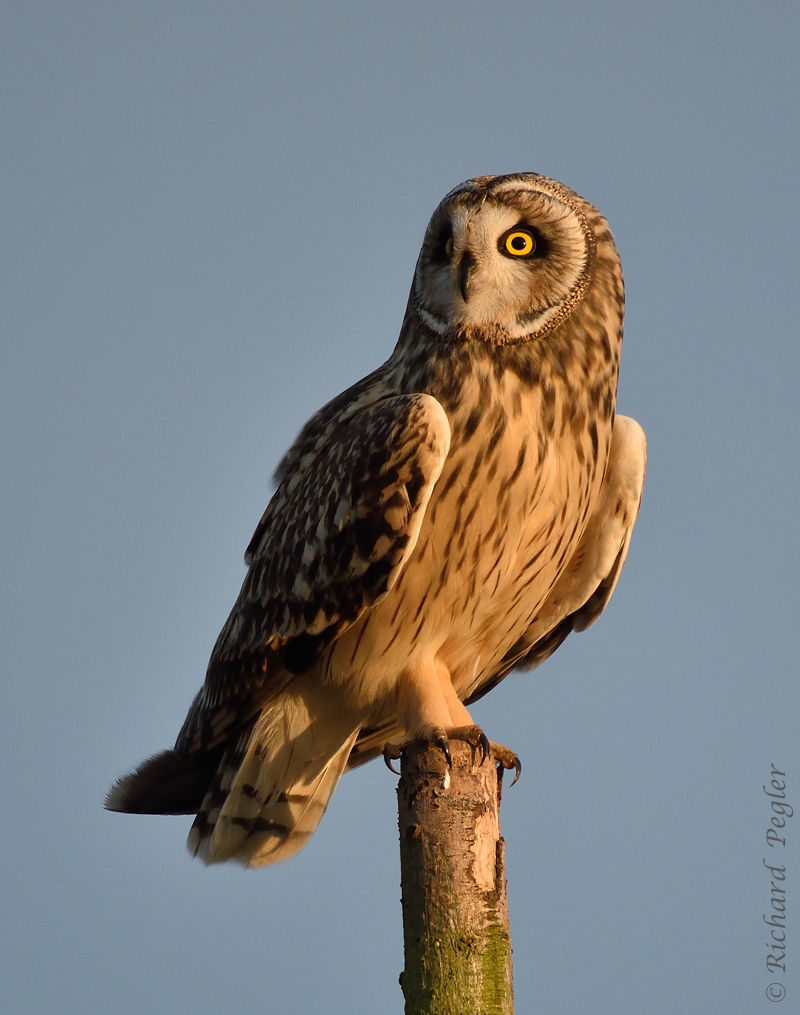 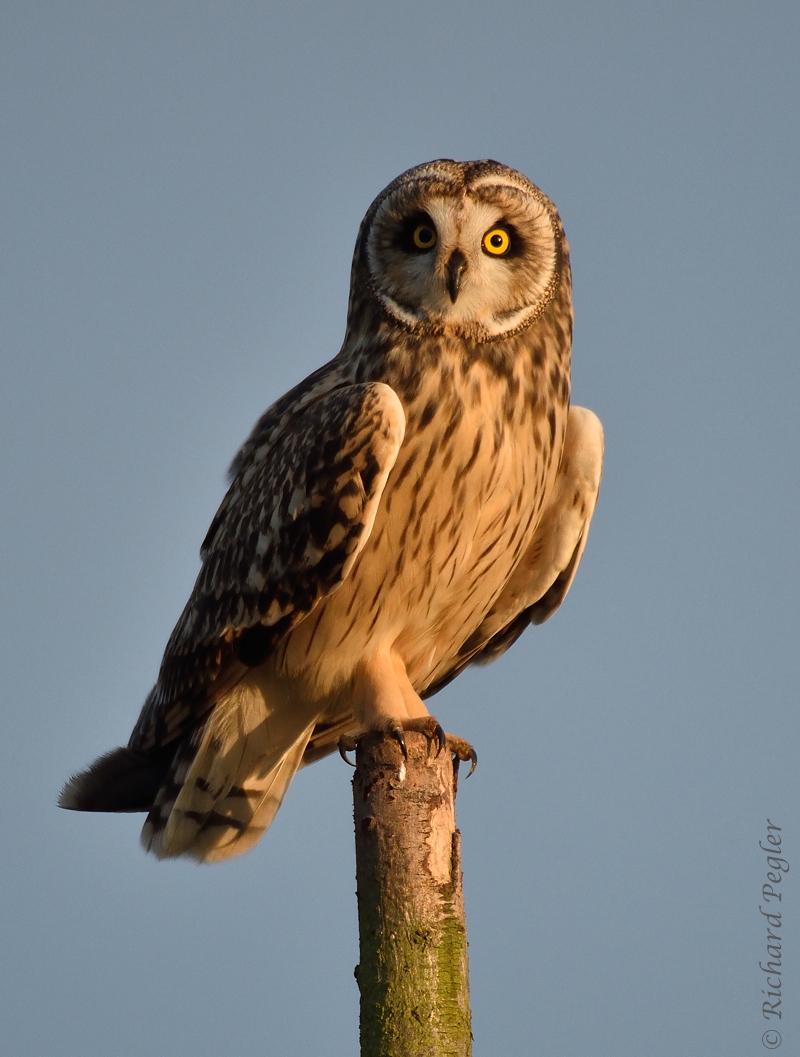 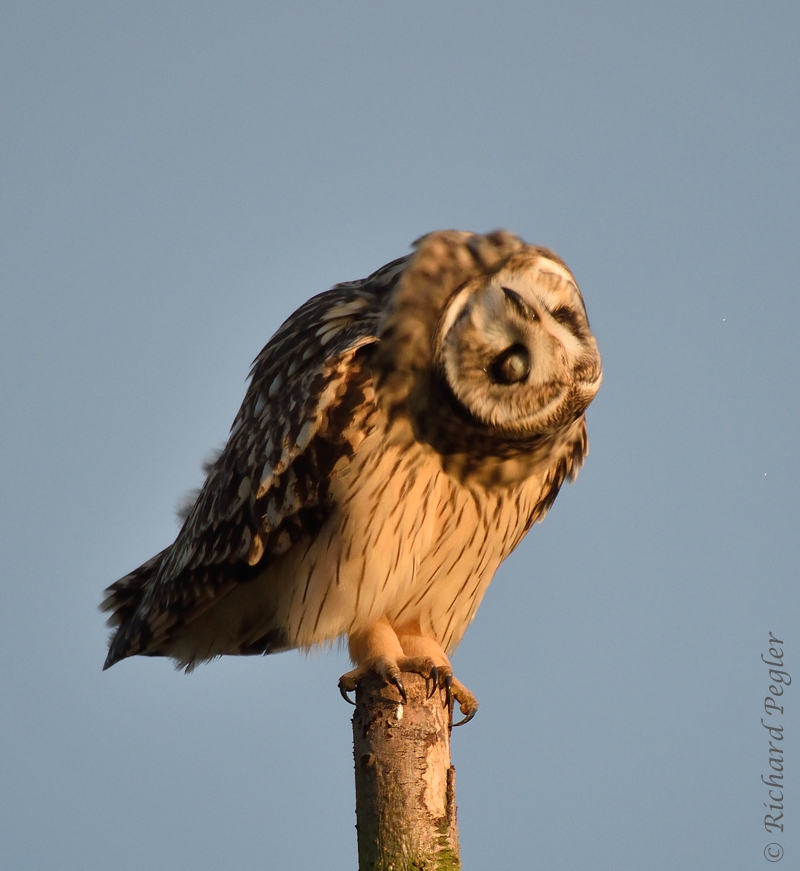 The owl disappeared over the hedge line shortly after this and I packed up my hide and retreated to a corner of the plantation. It was soon back again and did make some close approaches, but the effects of the wrong white balance setting were even more extreme, and pretty-much unrecoverable.

I've been there watching the owl again today, but I'm relatively sure that my images aren't up to much.

Thank you for dropping by.  I think that a post on my garden's winter visitors is overdue.

Just over a year ago my lovely wife bought me a new lens for my camera - yes, she's wonderful like that! The lens was a Sigma 50-500, and greatly superior to the Sigma 150-500 that I'd previously been using. Not only was the overall quality of the images better, but the lens offered the ability for close focus work - you can take photos with the subject approximately 10 cm from the front of the lens hood! I didn't make good use of this last feature until the summer of 2015, but then I found a whole new world through being able to see small creatures and objects in far more detail. This led, amongst other things, to a growing interest in  insects - not a serious scientific interest (although I may be heading down that route with dragonflies and damselflies!) but a sense of wonderment at what I was seeing. At my time of life, the retention powers of the grey cells are insufficient to be able to immerse myself fully in too many new interests!

I've already posted images of dragonflies, damselflies, and beetles from the second half of last year, so here's a few other bugs, etc. from that period, not previously shown.

I first photographed shield bugs when we used to have Common Green Shieldbug in our garden every year. Sadly, no shield bugs were observed in our garden in 2015, although I did find them elsewhere. The most amazing place for them was at Drakelow Nature Reserve, where I found three species of shield bug, plus a closely related Dock Bug in a stretch of approximately 5 metres! These bugs go through a number of stages (instars) before reaching maturity, and often different instars can be observed together at one time.

I start with the Common Green Shieldbug. My first observations were of 4th & 5th (final) instar nymphs and of adults, on 22nd September.

There is tremendous variation in the colours of this species, between green and black. This is mainly (but not totally) seasonal. My images do not show this fully but differences can be seen between that in the previous image and those in the subsequent two images, taken on that same day. 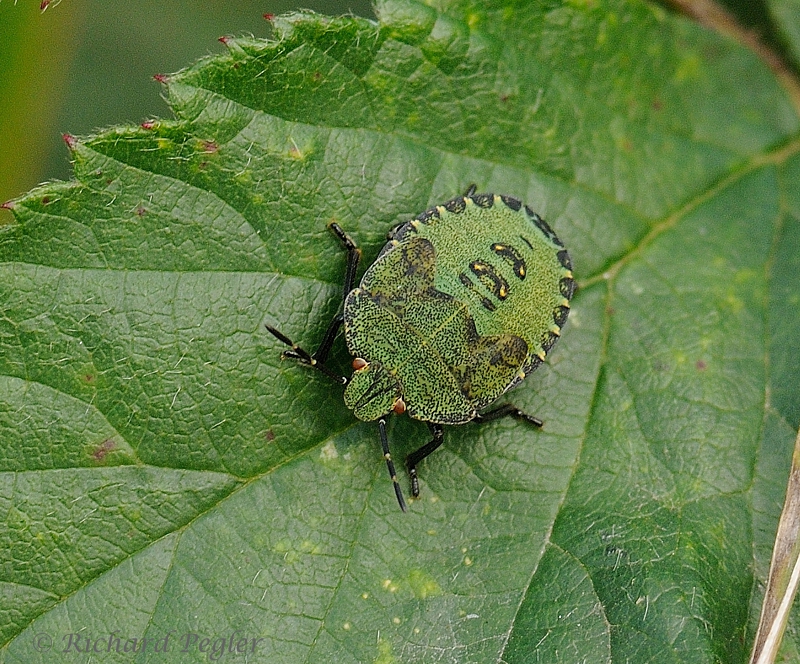 Here's one of an adult, also taken on that same day.

A visit to the same location on 30th September turned up large numbers of these bugs again. Here's one of a 5th instar on that day, with a colouring somewhere between my previous two images (above) of 5th instars.

A little closer to home, on 20th October, I came across this species again. The first image shows how flat they are in cross-section. These bugs are commonly known as 'stink bugs', and I include the second (rather poor) image because it shows the bug exuding fluid from its rear end in protest at my trying to persuade it to move to a more photogenic location. I suspect that this probably smelled quite evil, but I wasn't about to put my nose to it! 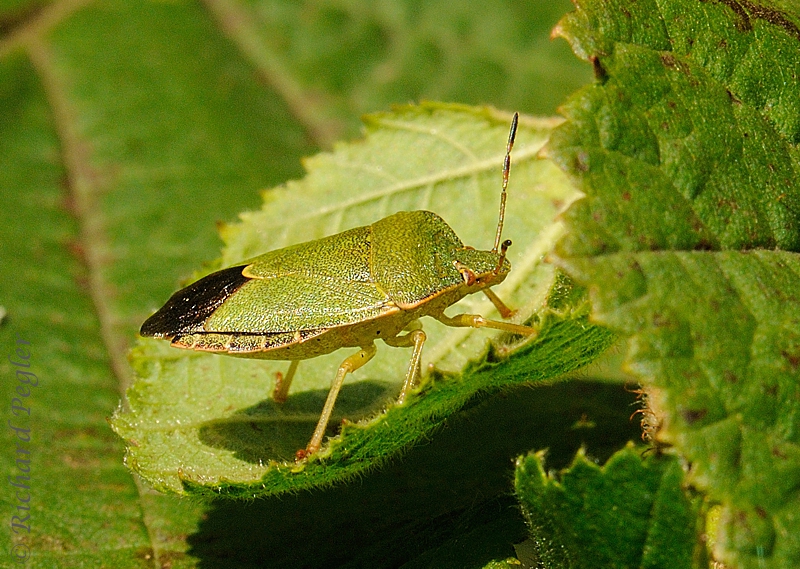 Here's more of the Dock Bugs. Again, some colour variation can be seen. 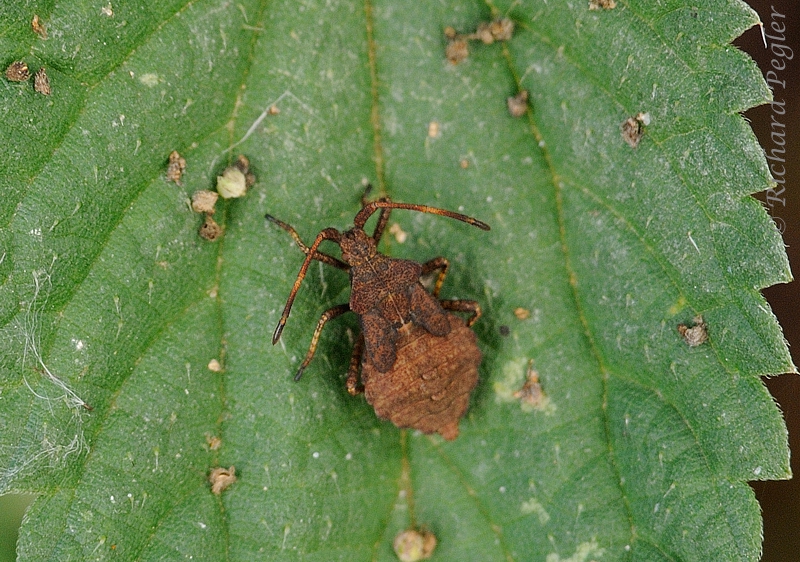 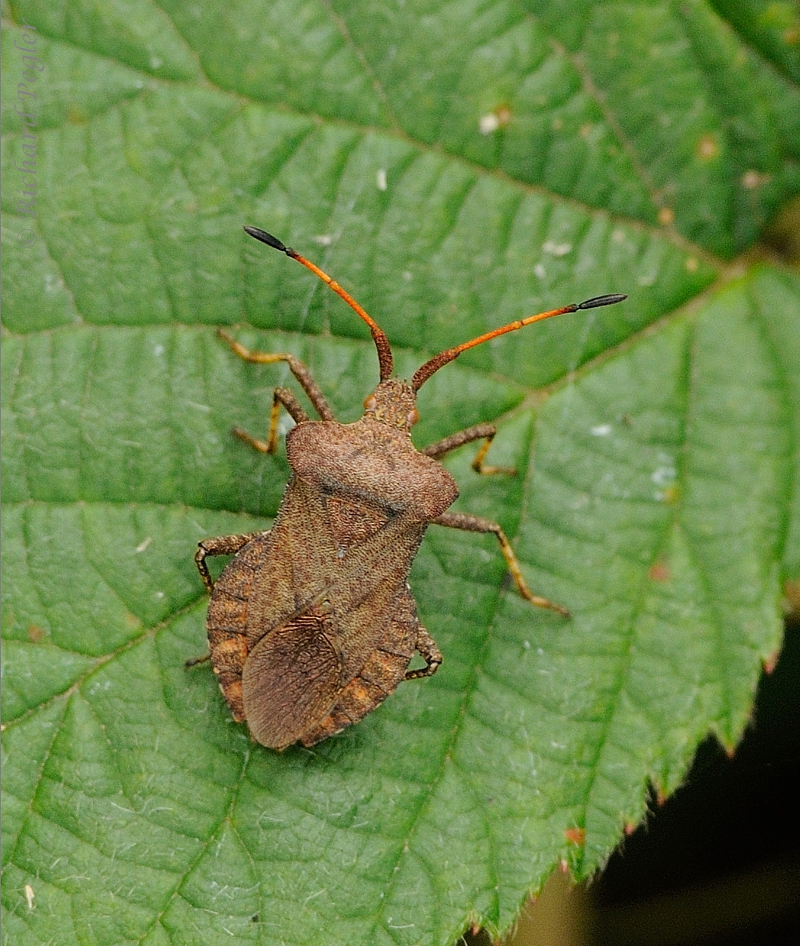 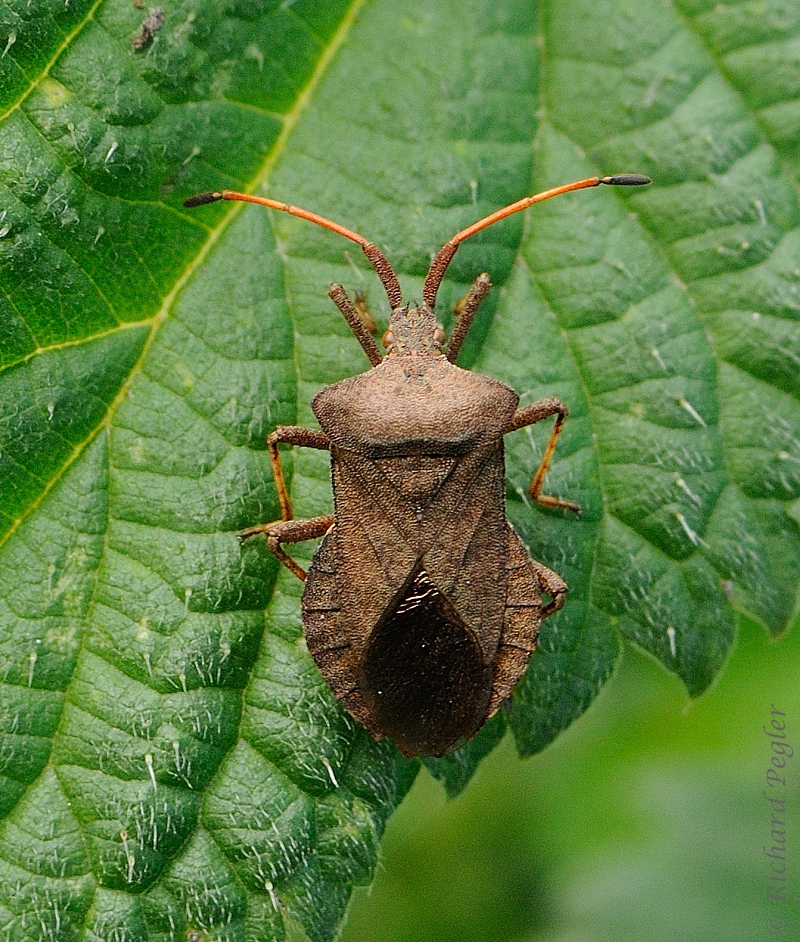 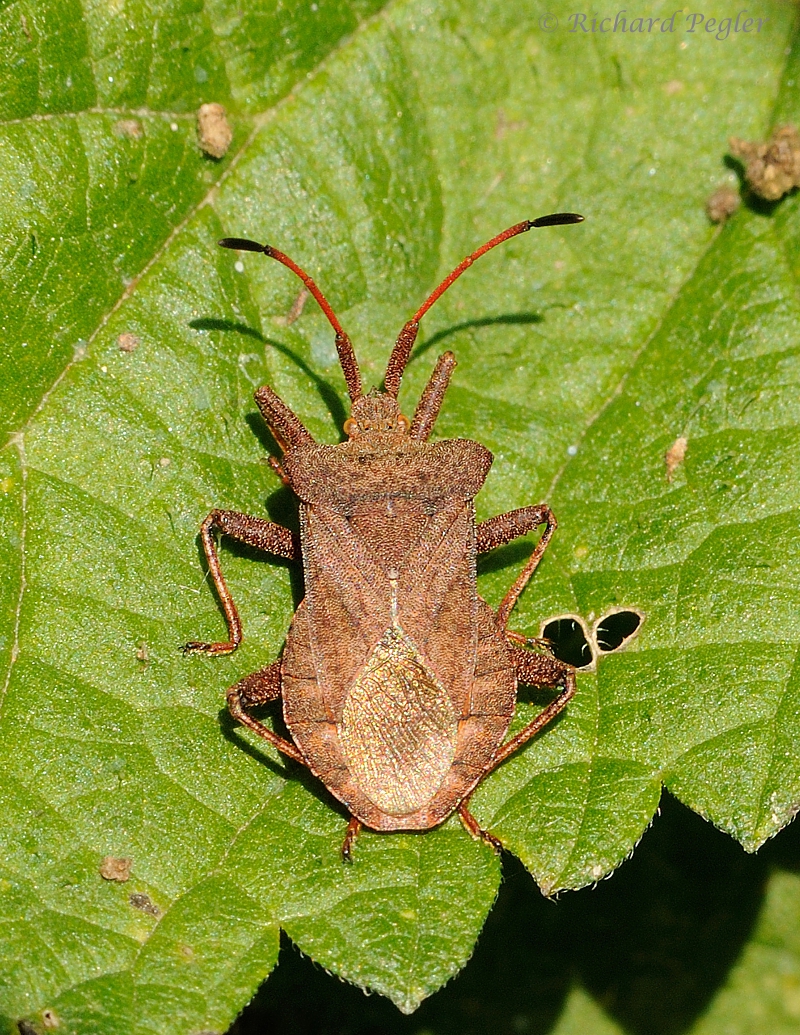 Also present on 22nd September, in amongst the other bugs, was a single specimen of Hairy Shieldbug. This is a 5th instar nymph.

On 30th September there was also a lone specimen of Gorse Shieldbug in with the other bugs, but no sign of the Hairy Shieldbug.

A little before the second half of the year (on 4th June, actually) I photographed a beautiful Lacewing.  I'm used to seeing the pale green Lacewings, but I don't think I've ever seen this blue-coloured species before. 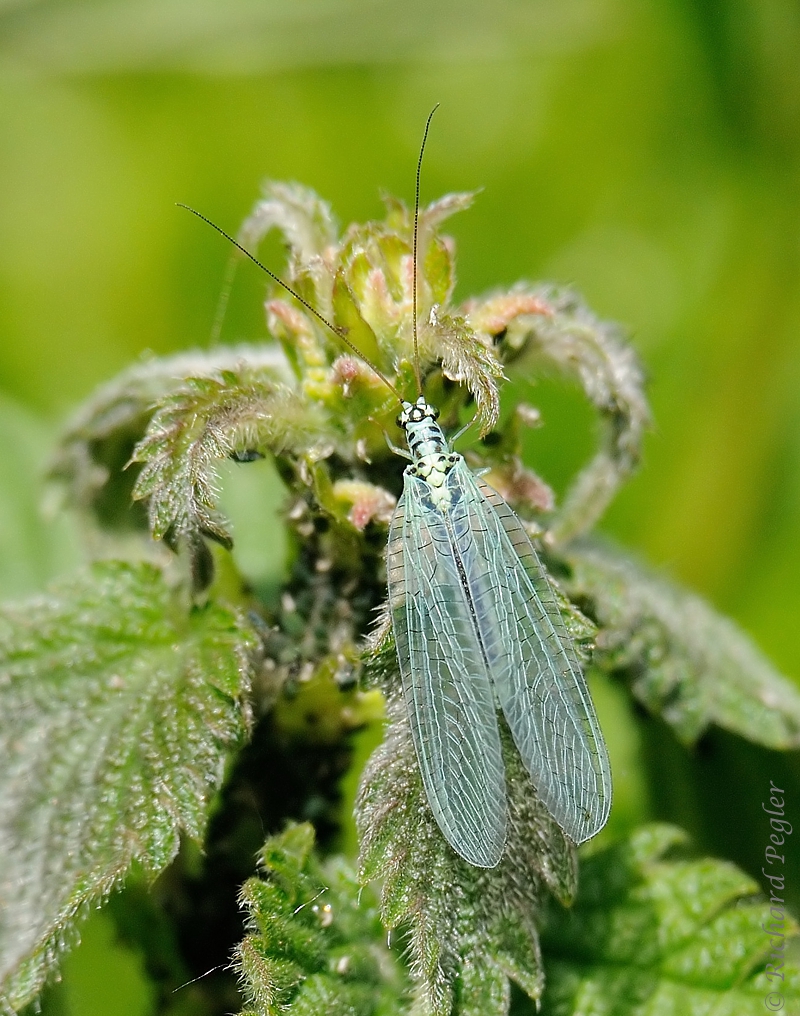 On that same June day, a Scorpion Fly was spotted. These can look quite fearsome from some angles, but not so bad from this point of view! Unfortunately the mouthparts are missing from view behind the leaf.

I have great difficulty identifying most flies, so some of the flies I'll show now will be anonymous!

This next one is an unidentified hoverfly species from Rutland Water on the same day as the previous two insects.

- whereas this hairy hoverfly, which I took at first to be a bee, was at Drakelow on 22nd September. 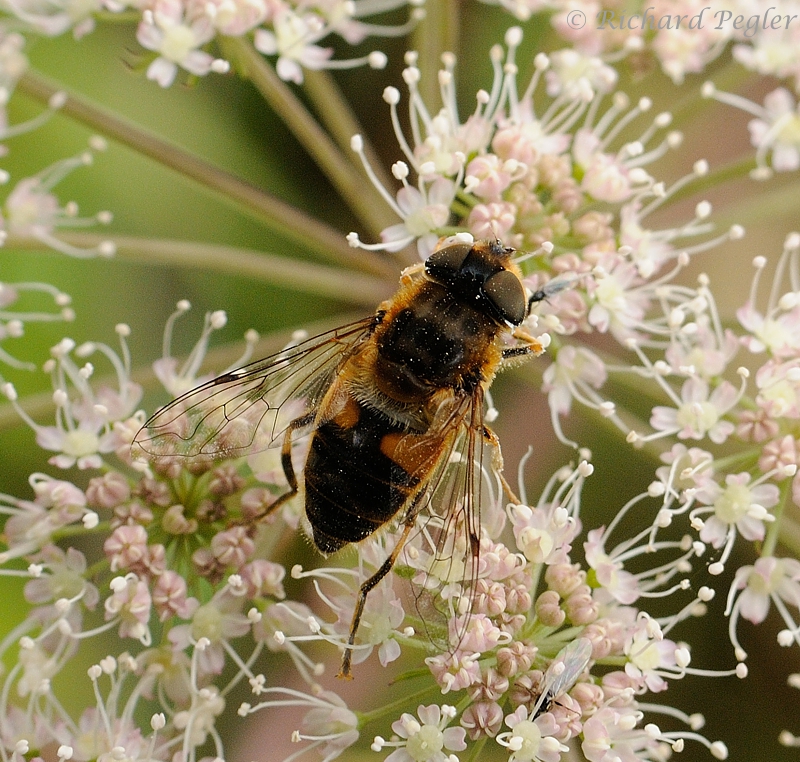 The next image of a 'greenbottle' Blowfly is, I believe, one of the Lucilia species. It was taken at Spring Wood Nature Reserve on 16th June.

The next images are of a horsefly which goes by the name of Twin-lobed Deerfly. It was in Waderscrape Hide at Rutland Water. They can give a nasty bite! 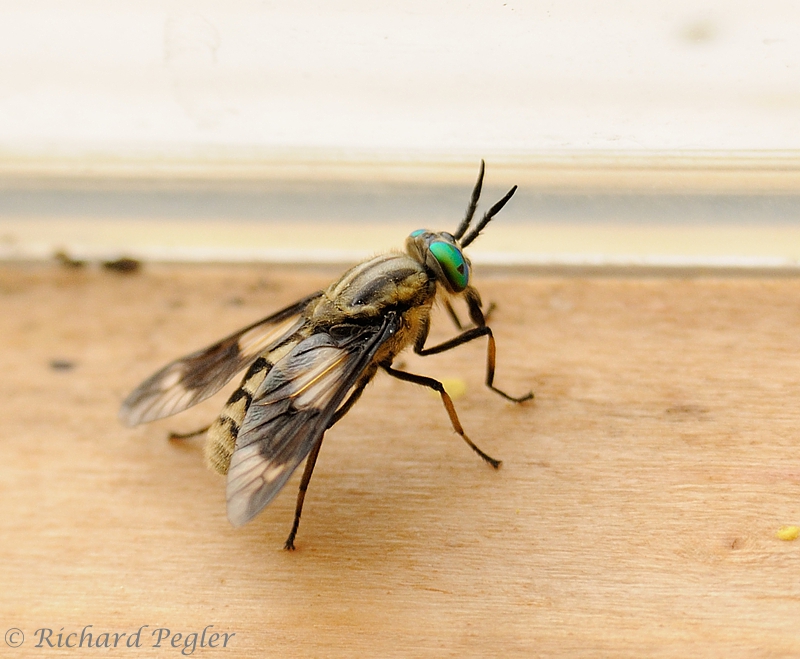 The next fly, which feeds on dung, is the spectacular Noon Fly. This one was photographed at Drakelow on 17th September. 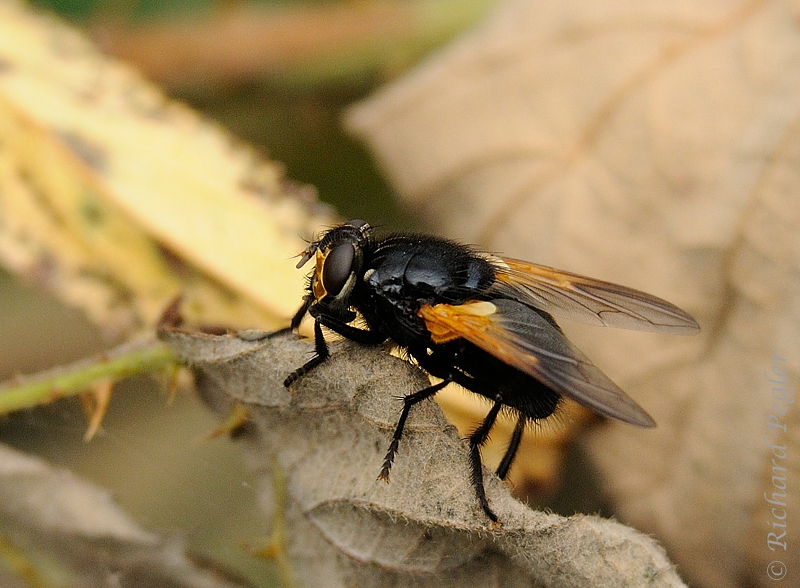 This last fly is, I believe, Nemorilla floralis (no 'common name' although far from uncommon!). It was taken at Drakelow on 22nd September.


We next come to a couple of wasps. This first one, taken at Rutland Water on 27th August, is of the Common Wasp that disrupts summer picnics!


This next creature was, in my childhood days, from a group classed as flies but now classed as wasps. It was found at Rutland Water on 9th September. I've cheated with these images as, in order to show that fearsome ovipositor I've had to turn the images through 90°. I cannot fully identify this species but believe it to be an Ichneumon Wasp of the Pimpla group. The problem is that I cannot find reference to one of these with such a long ovipositor (more than 50 % of its overall length!) and this large (from memory around  6 or 7 cm overall). Any help with its identification would be much appreciated. It was difficult to photograph as it was very active and didn't stay still for more than a second or two before moving to another position. 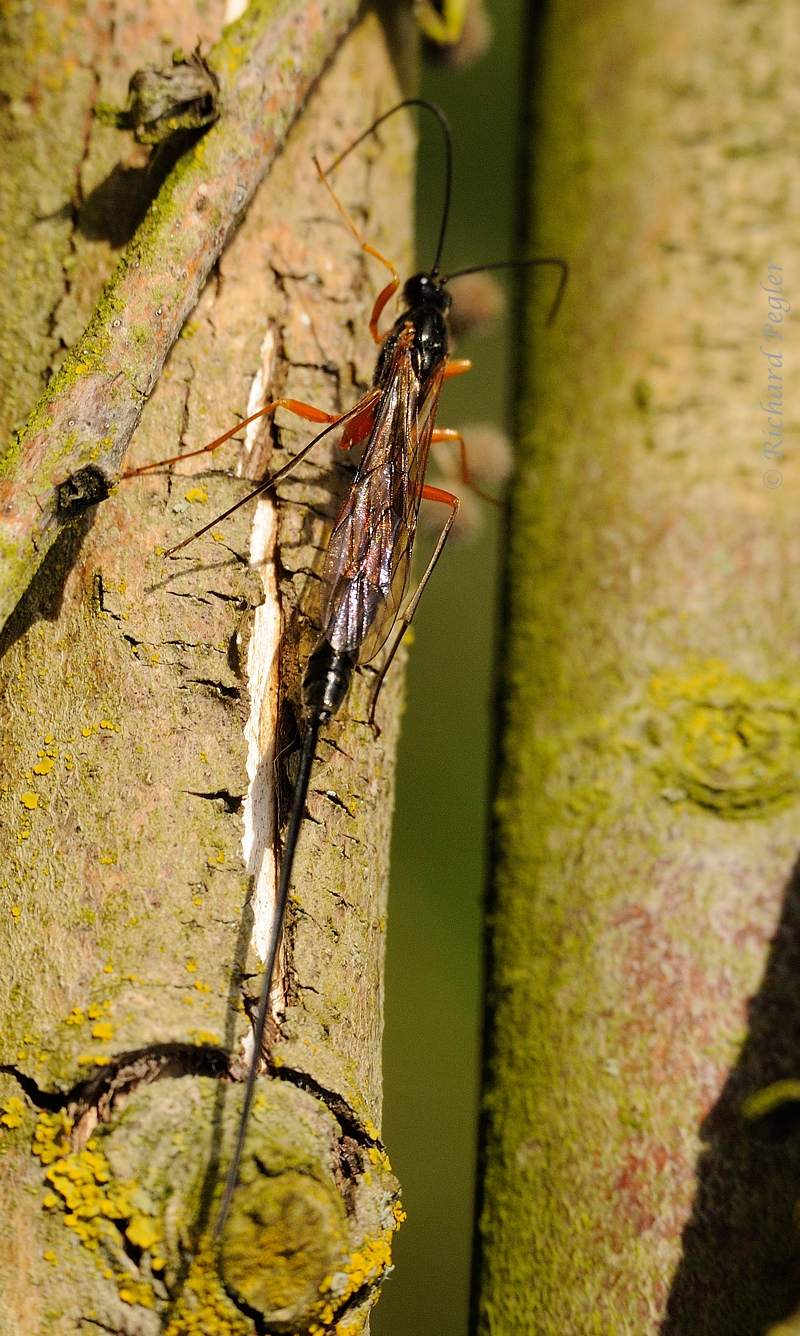 I do feel that I'm starting to become something of a bug-er! Where it will lead to, who knows??

I hoping that the new camera body, with its superior resolution and with the Sigma 50-500 attached, will allow me to take better and more detailed images this year - roll on the summer!!

Thank you for dropping by. My next post may be back to owls - or it might feature some of the winter visitors to my garden. Please watch this space!
Posted by Richard Pegler at 09:33 22 comments: