With this blog post, which presents some of the highlights that we enjoyed in our garden in July, I am, at last, getting near to being up-to-date with my blog posts. July did turn up some interesting events, so here we go!

Historically, we have had occasional sightings of dragonflies and damselflies in the garden. However, this has only been, maybe, three or four times each year. Since installing a mini-pond just over two years ago, there had been no significant increase in the number of sightings, except for the mass emergence of more than seventy Large Red Damselflies in May and June this year. Any damselfly or dragonfly sighting is, therefore, a source of considerable excitement in the Pegler household!

On this day, we were visited by a female Banded Demoiselle - the first time we have ever seen this species in the garden. It was on the ground near the pond when first spotted. We didn't see it go to the pond, but it may have been at the pond before we spotted it - we can only hope!

I have only placed two flowering plants in the mini-pond - one is an iris and the other a lily. After two years, the Iris versicolor has still not flowered, but the lily, Nymphoides peltata, has a long flowering season.
Friday, 8th July

We had another damselfly visit this day. This time it was a female Common Blue Damselfly. It was spotted on the edge of the bird bath. This appears to be a teneral female, so not much chance of it having oviposited in the mini-pond!

A Comma butterfly visited the garden and demonstrated exactly how it got its scientific name.

We have done quite well with breeding birds in the garden this year. Juvenile Robins never fail to delight us - they seem to behave like adults from birth!

This was a red-letter day, in that we had two odonata species visit the garden - the first time that we have witnessed more than one visit in a day.

First to arrive was an immaculate immature Migrant Hawker. It hung around (literally!) for a few hours. 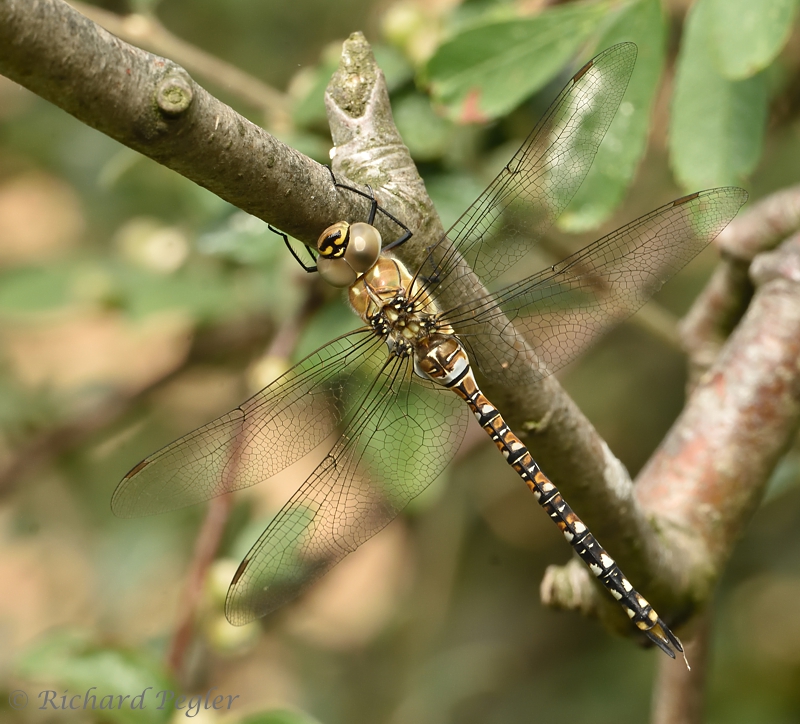 We also had another female Banded Demoiselle fly in, although it only stayed briefly.
I also photographed two butterflies that day, including a Comma which was trying to distract me from the Migrant Hawker.
This Gatekeeper was a male, as witnessed by the dark 'sex brand' in the middle of the upper forewing.

Every summer we get good number of the tiny moth, Pyrausta aurata, in the garden. These are so diminutive, with a wingspan of 15-18mm, that it is easy to overlook them as flies. They are often referred to as 'mint moths' and, indeed, they do seem to like hanging around the garden mint.

This rather beautiful moth landed on our kitchen window. It's a micro-moth without a common name.

It had been many months since we last saw a woodpecker in our garden so we were thrilled when a juvenile Great Spotted Woodpecker visited this day, and returned several times during the day. 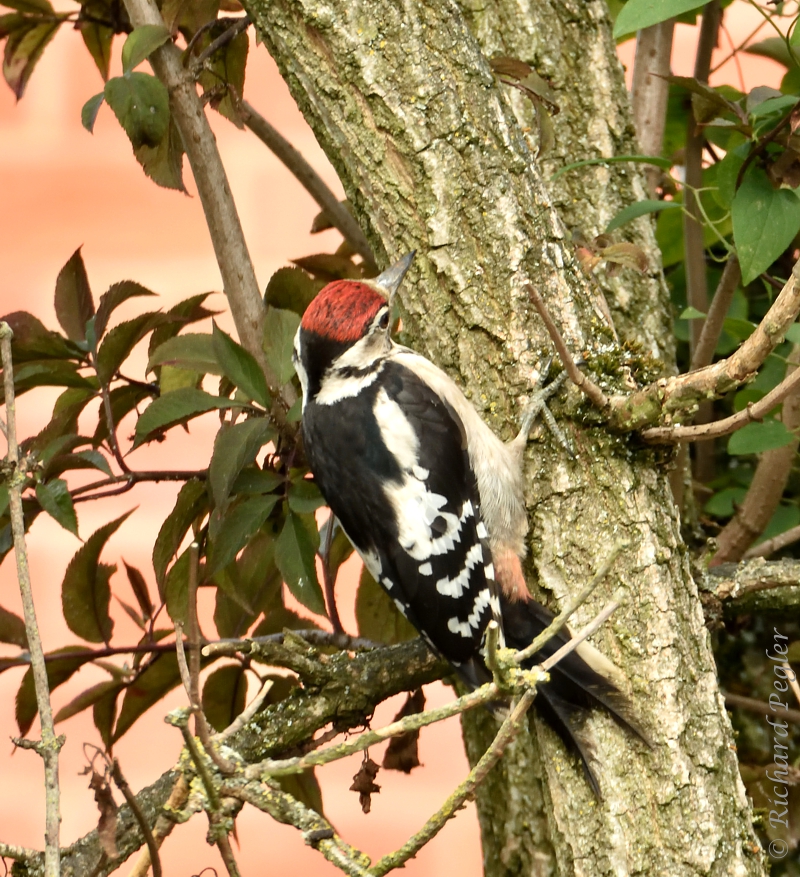 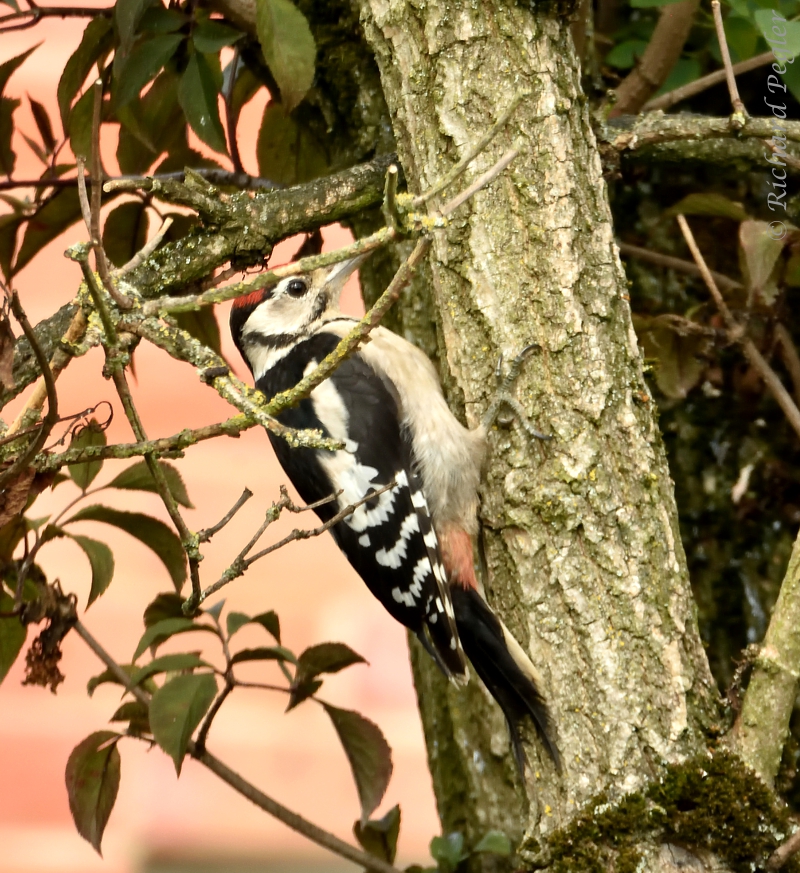 Red Admiral butterflies were visiting too.
That night, the moth trap went out. Considering my equipment is not very sophisticated, a catch of 31 moths of 20 species wasn't too bad. Nothing rare was caught, but here are a few of the more attractive ones.

I find the Yellow Tail to be particularly attractive with its fluffy head and legs.

The Small Magpie is a very common micro-moth but, none-the-less quite appealing in my opinion.
The Broad-bordered Yellow Underwing is another common moth. This pale one is a female.
My final offering is also very common - the Dusky Thorn. I had one in the trap on this night but on 21st August I had seven of them in my trap!
This completes my catch up for July. If all goes according to plan, I shall be publishing a blog post featuring August events in about a week's time. In the meantime, please take good care of yourselves and Nature.  Thank you for dropping by - - - Richard

Herewith, an account of a few local visits that I made in July. Again, the prime objective was to look for dragonflies and damselflies. The locations will be familiar to regular readers of my blog - I didn't go far!

I usually try and avoid going out to look for wildlife on a weekend because 'every man and his dog' is also out, but there are a few local places that I can rely on to be quiet, to the extent that, more times than not, I will not encounter another person. Saltersford Valley CP is one of thosae places.

My visit on this day was on a warm and sunny afternoon, and I had the place to myself! As is usual, I first surveyed the board-walk area and saw very little apart from Azure Damselflies.

I got all the way round to the second lake without finding anything of great interest and, lazily, raised my camera to a Grey Heron that flew past and then briefly landed in a tree about 30 metres away before departing. I was surprised to see that the results were far more pleasing than I expected! Out on vegetation in the water were three Red-eyed Damselflies. It's typical of this species that they like to place themselves in positions where it is difficult to photograph them! Here's a record shot of one.

A pair of Blue-tailed Damselflies seemed oblivious to my presence. The female was of the andromorph blue form.

I usually take a few pots with me when dragon hunting, just in case I find any exuviae. On this occasion I didn't take any - to my regret. I found this one on a reed leaf. 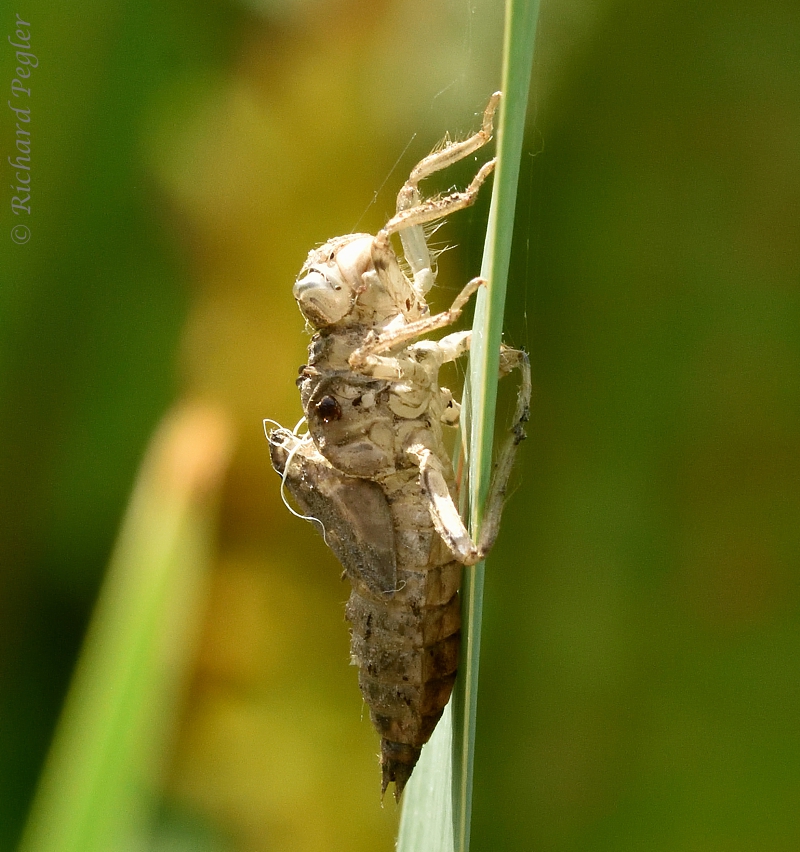 I managed to tear off the rigid leaf that this was attached to, and stuck the base of the leaf into a pocket so that the exuvia was away from my body, with a view to getting it home safely so that I could examine it and confirm its ID. What I didn't reckon with was brushing against some foliage - which completely destroyed it! I was pleased that I'd taken some shots of it in-situ, and believe my ID, as noted above, is the most likely.

A Four-spotted Chaser was on a distant reed that it was impossible to get nearer to. This was a pity as it was one with quite extensive black markings on the wings, heading towards f. praenubila.

There were a few Black-tailed Skimmers in the area, having the occasional squabble over territories. Two of them obliged by perching within photographic reach. One of these had a very noticeable kink in its abdomen. 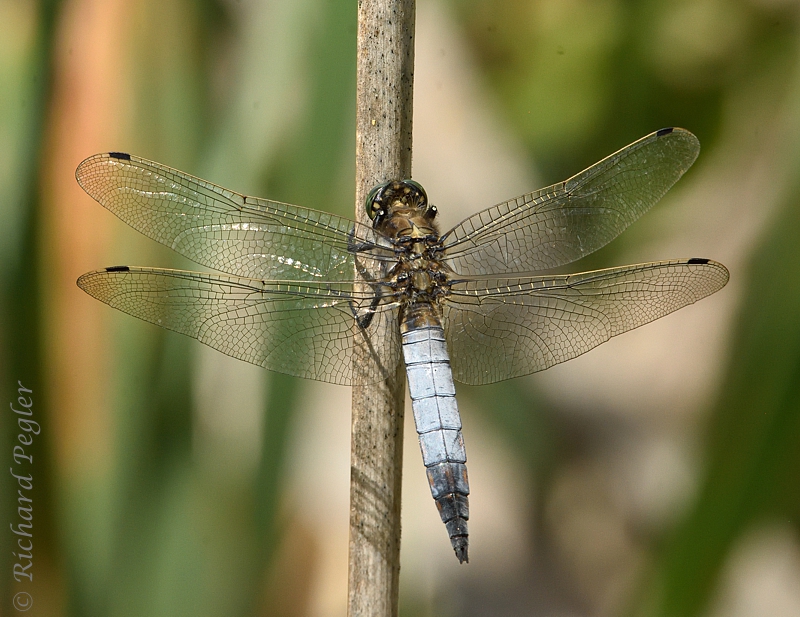 I then made my way back to the first lake and, where there once was a picnic area before Covid times, I stopped to re-scan for dragons. To my utter amazement, a Brown Hawker seemed to be ovipositing in between the the timbers on landward side of the stockade-like wooden walling that forms the boundary between the picnic area and the lake. I stood my ground and she slowly made her way towards me, continually dipping between the timbers, eventually arriving at a point less than half a metre from my feet! It was only me stepping back at this juncture that made her cease her activities and depart. 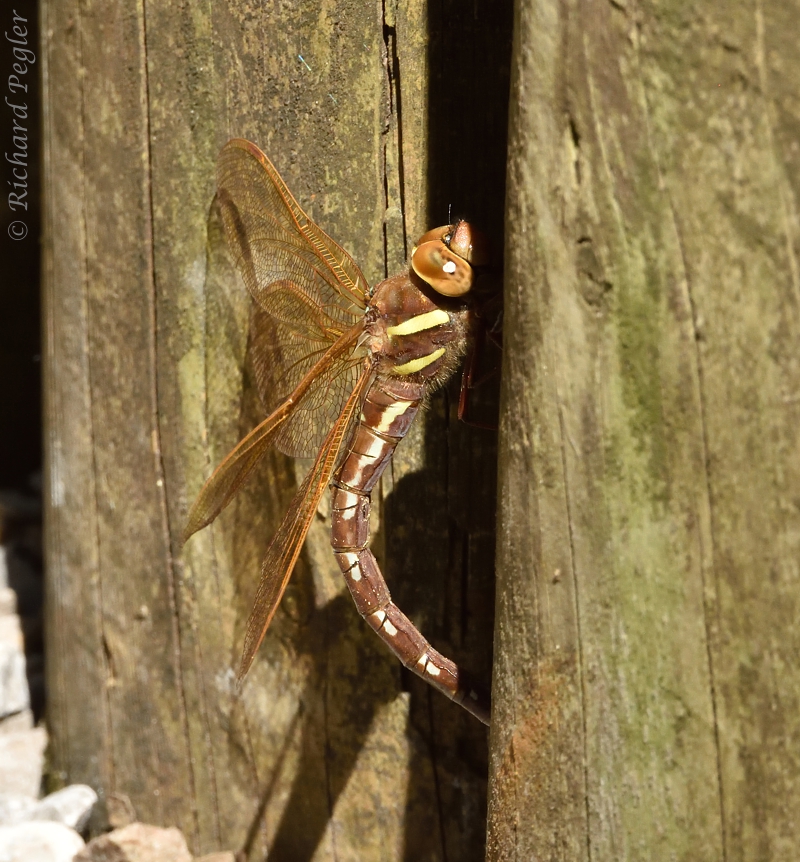 As I started to make my way back to the car, I found a Ruddy Darter beside the path.
Thus ended a most enjoyable visit.
Wednesday, 13th July              Heather Lake
Following a disappointing visit in mid-June, I decided to give Heather Lake another try. The vegetation was even higher than on my previous visit and the brambles more obstructive. It was difficult to see anything over the water.
On my way down to the lake there was a confiding, but very worn, Comma which was defending a territory on the track.
The only damselflies that I saw and managed to photograph were Common Blue Damselflies, and although I saw some Emperor dragonflies, I only managed a poor shot of an ovipositing blue-form female.
The only other things of interest seen were two species of day-flying moths - both quite common.
On my way back, the tatty Comma was still holding territory in the same place.
The disappointment of the state of things at this place which, in previous years, had been a great favourite, has made me reluctant to return this year. I shall see what next year brings.
Sunday, 31st July                           Saltersford Valley Country Park
We come to the very end of the month, with me having only made four trips out to photograph wildlife - a visit to the Ashby Canal on 5th July has appeared on a previous blog post. My fourth trip out was to Saltersford Valley CP once more.
On the boardwalk, I found a battle-scarred Black-tailed Skimmer devouring a Blue-tailed Damselfly. In the second image you can see that the legs of the damselfly are being discarded. 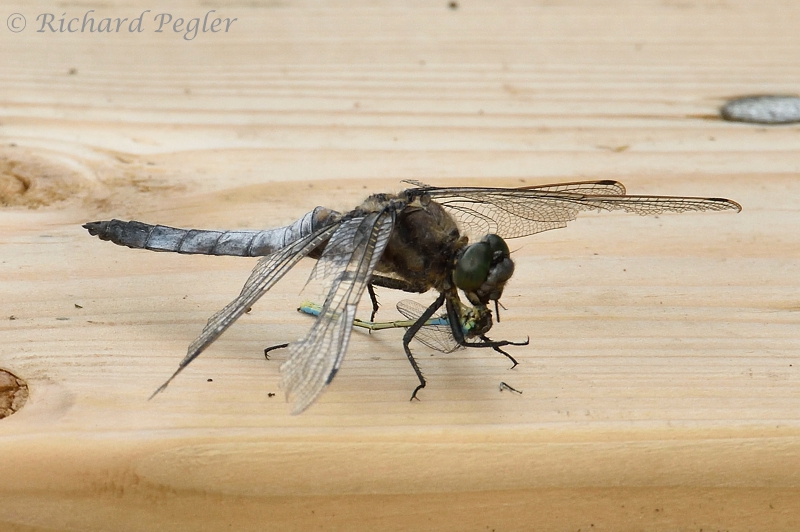 Further along, I found a Ruddy Darter that was very cooperative in changing its pose on its favoured resting point to give me some decent photo opportunities. 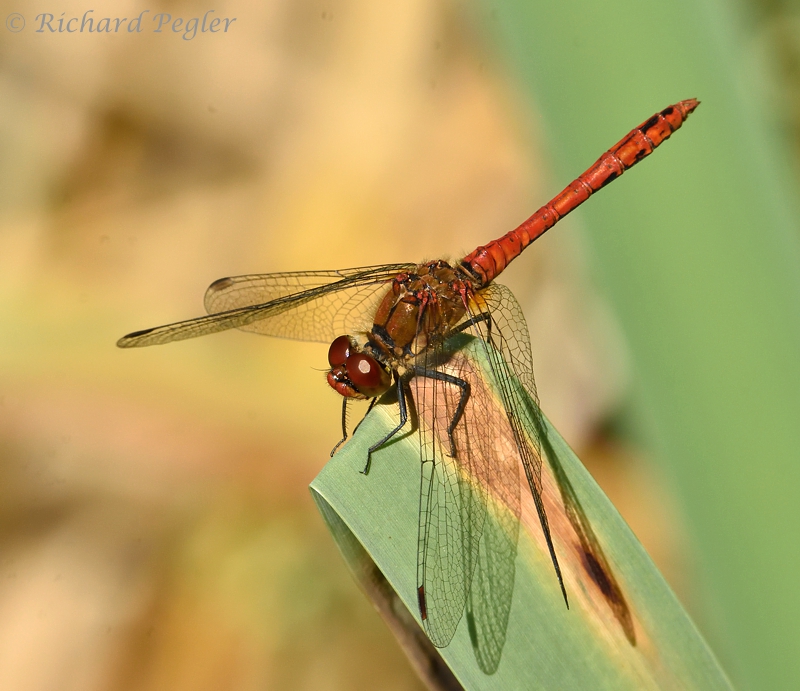 On other areas of the site, I found Azure and Common Blue Damselflies.
I also photographed a few insects. The Peacock butterfly is one of our most common butterflies, but it is quite spectacular!
Hoverflies of various species were around in good numbers, but I only paid attention to a couple of them. You can tell that the first is a male, as it has eyes that meet in the middle, and the second is a female as the eyes are well-separated. This is a general rule for hoverflies.
Back at the boardwalk, the Black-tailed Skimmer had sated its appetite and was seeking somewhere to rest and digest its lunch. This gave me a better photo opportunity and shows just how worn this individual was.
As I headed back to the car, I found this Emerald Damselfly lurking in a shady place, away from the water.
It had been a rewarding visit, and this place is now firmly one of my favourite local dragon hotspots.
My next blog post, hopefully in about a week's time, is probably going to be an account of July's visitors to our garden. I'm slowly getting there and nearly up to date!
In the meantime, please take good care of yourselves and Nature. Thank you for dropping by - - - Richard
Posted by Richard Pegler at 12:40 24 comments: