On Saturday 6th I went to Alvecote Pools, Warwickshire, for a couple of hours to try and locate the redhead Smew that had been reported there. With the help of some local birders, this was not difficult, although the bird was very distant.
.

Having observed this bird for some time, we were heading back towards the road when a couple of drake Goosander flew in - a nice end to the morning!
. 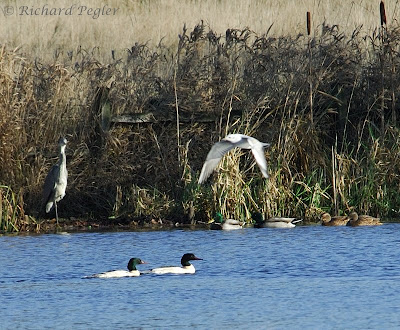 I was so taken with this place, and the friendliness of the local birders, that I decided to return for a full day the following day. There were not so many wildfowl around, probably due to the clay pigeon shoot that was taking place in a field over the road from the pools. However, the company was just as good as the previous day. One of the highlights of the day was being introduced to a 'working' Harris Hawk. 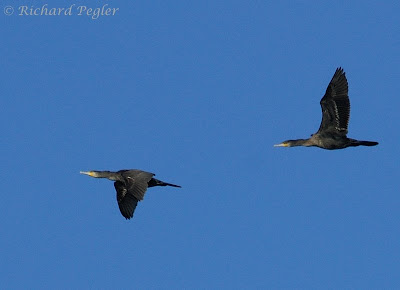 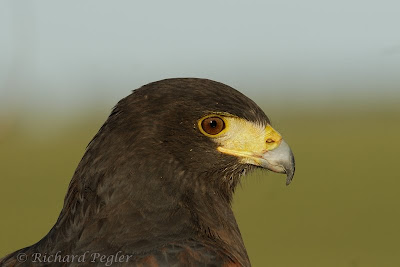 Harris Hawk
Posted by Richard Pegler at 18:51 No comments:

It was such a lovely day, that I realised I needed another day off from the decorating, and so I decided to seek out the Waxwings that had been seen for the past few days on Cannock Chase. I arrived there to find several other people trying to find them at the point where they had been seen. However, apart from a passed-on report that three had been there early in the morning, there was no sign of them. Good numbers of Blackbirds, Redwing, and Fieldfare were very active in the immediate vicinity, and Kestrel, Buzzard, and Green Woodpecker were also seen - but no Waxwing. Contenting myself with some photos of Fieldfare and Redwing, I left at approximately 14.00 after three hours waiting. I later found that the Waxwings showed up about an hour after I left.
. 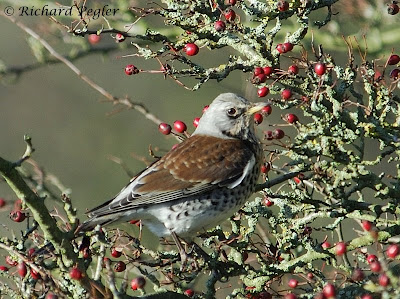 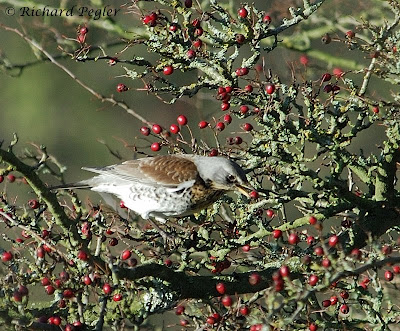 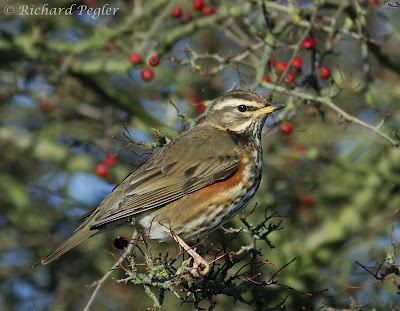 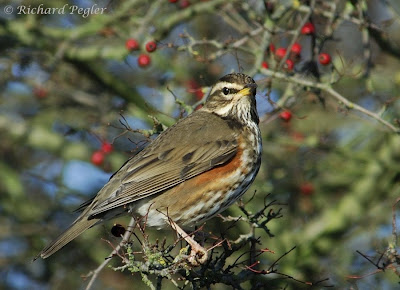 On the way to Cannock Chase, just before Lullington, I came upon a female Kestrel on a post. My camera was already at the ready beside me, and so I wound the window down and took some safety shots during which the bird flew on to the next post. I then attempted to draw up a little closer, and only got one shot off before the bird flew off, away from the road. The results are far from good, but I am rather fond of these birds for some reason, so I publish one of the results here. 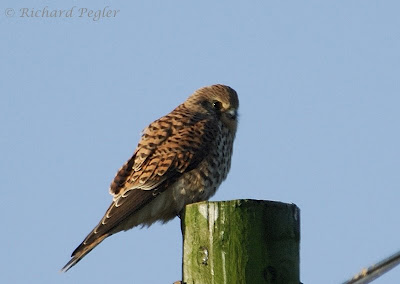 Posted by Richard Pegler at 15:26 No comments:

Attracted by the reports of the Cattle Egret at Barton-under-Needwood, I took a break from decorating and had a ride out there in the afternoon. I had not been there for more than about 15 minutes when it flew in. I went again the next day to see if I could get some better photos, but at 15:00 I was told that it had not been seen all day. However, I did find myself interviewed by Radio Derby while I was there.

On the way back home, I dropped into Croxall Lakes. Although there was nothing of major interest there, as far as I could see, there were plenty of birds to keep me occupied. At one point, a busy flock of Redwing made their way through, feasting on the abundant crop of berries beside the railway. I managed a photo of one of the few (2?) Fieldfares that were about in the fading light.

Posted by Richard Pegler at 18:28 No comments: