My last blog post covered a period which terminated on 8th December - the day that Lindsay and I departed on a journey to have her fitted with a new right knee. The time since then has had a number of ups and downs, with rather more downs than we expected or would have wished for. I'm sorry to say that, as I write this, Lindsay's recovery is still being marred by an infection that could have serious consequences.

I returned home this day after a meeting with Lindsay's surgeon, with Lindsay remaining in hospital.

In my last blog post I said that I was a little disappointed that my departure from home with Lindsay had coincided with the arrival of avian winter visitors. In spite of only getting home at mid-day, this day I managed to record 17 species putting a foot down in our garden before sunset four hours later, and I did photograph a few of the more common birds.

The Magpie was being greedy, and stocking up on peanuts.

I did also get some shots of one of our much less common winter visitors. At this point in time, there were still plenty of berries left on our Rowan tree.
Sunday, 11th December

We had a very cold morning, with a sprinkling of snow. I was called mid-afternoon to collect Lindsay from hospital, but I did manage to get a few shots of the two wagtails that visited that day - (possible - doubt due to a comment from 'Conehead54, see below) White Wagtail and Pied Wagtail. My records list them as two different species but, technically, one (Pied) is a sub-species of the nominate (White) species.

At the start of the week, we had a little more snow and we were still being visited by Pied and (possible) White Wagtails.

Dunnock is a daily visitor to the garden and sometimes we get up to three of them. However, I don't often photograph them. This rather dull day was an exception, however. I find the faces of this species to be particularly attractive.

We also had visits by Mistle Thrush and Redwing this day, although only Redwing was photographed.

Both Pied and (possible) White Wagtails were still with us, and the Pied Wagtail offered itself up for some more imtimate shots. 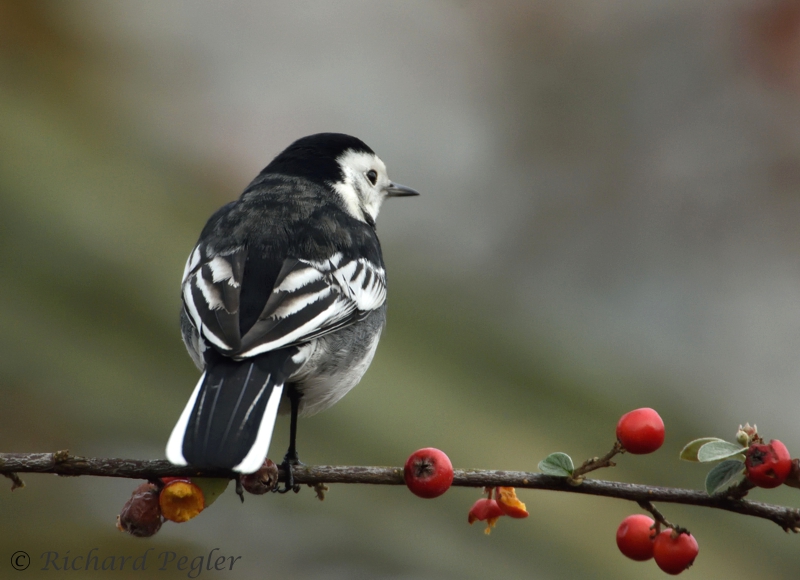 This was a very cold day, although I did not record the termperature. I did, however, photograph frost on our conservatory window, which made an attractive pattern.

Fortunately, it was also a sunny day. We were pleased to welcome the winter visitors again.
I was pleased to get the first image, below, of one of the two Redwings that visited as it shows how the top-of-head plumage overhangs their eyes - a fact that I don't recall noticing before. A first winter male Blackcap, with its black cap fringed with brown, was back with us this day also, and has continued to be an intermittent vistor.
There was beautiful golden light towards sunset, and I photographed two of our visitors which were still around.
Friday, 16th December
It had been a while since we last saw a Bullfinch in the garden so I was delighted to spot a male visiting, although it was a very dull day, the bird was about as far away as it was possible to be in our garden, and so my shots were not good.
I was rather pleased with the background colours in this next image, so please excuse yet another Mistle Thrush.
I was pleased to get some video clips of the (possible) White Wagtail that visited just before sunset.
Saturday, 17th December
Needing to keep my trigger finger exercised, I took some shots of a Redwing in the garden.
Sunday, 18th December
We had a remarkable 23 species of bird put a foot down in our garden this day (in summer it's an execeptional week when we get 20 species in the week). We had all three wagtails ((possible) White, Pied, and Grey), although White Wagtail was not photographed.
For me, the most exciting visitor that day was a Song Thrush - a species that rarely visits us, with the previous visit being on 28th November, 2021.
The male Bullfinch was back. I've said it before, and I'll say it again - Bullfinches are some of the messiest eaters in the avian world I know of.
A little more excitement was caused by the Redpoll that showed up. I only managed a record shot on one of our feeders at the top of the garden.
Wednesday, 21st December
We had another visit by Song Thrush, which put on a good show. Fortunately, there were still a few berries left lower down on our Rowan - they have all been consumed now. 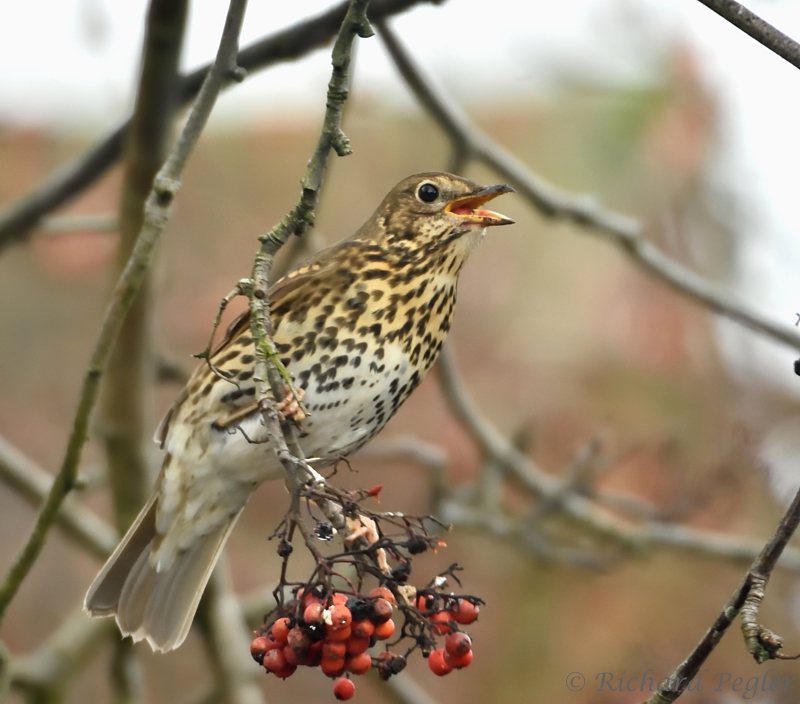 I was also delighted when Stock Dove made a return visit.
Thursday, 22nd December
The star visitor this day was a male Sparrowhawk. Sadly, it did not linger long enough for me to get a decent shot, and it left without its dinner.
Friday, 23rd December
A non-wildlife item to report for this day. Last Christmas I made a leather bag for Lindsay. On seeing it, our daughter asked if I would consider making one for her, but to a different design, and with a cat motif. How could I refuse !?  I'd promised her it would be her Christmas present, but that was before we learned of Lindsay's pre-Christmas knee operation. Much to my relief, after working on it for a couple of months, I finished it just two days before Christmas. I think that she was pleased with the result.
Sunday, 25th December
The week ended with what I believe is possibly our highest ever weekly tally of birds setting foot in our garden - 27 species (although I confess to a slight cheat here as Pied Wagtail is a sub-species of White Wagtail).  These were (in alphabetical order):-  Blackbird (5) ; Blackcap ; Bullfinch (2) ; Chaffinch (5) ; Crow, Carrion ; Dove, Collared (4) ; Dove, Stock ; Dunnock (2) ; Goldfinch (14) ; Greenfinch (3) ; Jackdaw ; Magpie (4) ; Redpoll, Lesser ; Redwing ; Robin (2) ; Sparrow, House (3) ; Sparrowhawk ; Starling (8) ; Thrush, Mistle (2) ; Thrush, Song ; Tit, Blue ; Tit, Coal ; Tit, Great ; Wagtail, Pied ; Wagtail, (possible) White ; Woodpigeon (5) ; Wren.
Due to a number of factors, no further significant photos were taken before the end of the year.
I am sorry if you find the subject matter in this blog post is too repetitive, but the winter visitors are something that I have really cherished and I wanted to give them a level of coverage that reflected their importance to me. Having the garden, and the winter visitors, has been a real benefit to my wellbeing while I am confined to home looking afdter Lindsay.
Hopefully I will be able to publish another blog post in about a week's time, but I have little material to offer as I write this as the winter visitors seem to have now departed! In the meantime, please take good care of yourselves and Nature.
Thank you for dropping by - - - Richard
Posted by Richard Pegler at 16:09 35 comments: