I'd not been out birding for nearly a week, the sun was shining, and I had a couple of hours to spare, so I set off to go to nearby Hicks Lodge. I parked in Oakthorpe Colliery car park, decided to leave my wellington boots in the car as, although the path into Hicks Lodge from the car park had been very muddy on my previous visit, we'd enjoyed a spell of dryer windy weather so I was confident that conditions would be better - wrong, the path was even worse and the muddy water came over the top of my footwear! Undaunted, I continued. Without further 'beating about the bush', here's how the brief visit unfolded.

This is the bush that I didn't 'beat about' - it was a joy to see the gorse in bloom as I neared the lakes. I realise now that I'm probably thoroughly confusing my overseas readers - I'm even in danger of confusing myself!

The second small pond on my right, before I got to the main lake, held a couple of Coot. The water was sheltered and as still as a mill pond.

Over on the main lake, I quickly spotted the Bar-headed Goose amid thr Canada Geese on the far side of the lake. This bird has been here for well-over a year now, and is considered to be'an escape'. However, I enjoy seeing it. This is the 'Goose' referred to in the title of this post.

This year I have resolved to record my wildlife sightings and report them to the appropriate  County Recorders. I counted 111 Canada Geese and 45 Lapwing. Here's a shot containing both species

I spent a little time in the hide here, but to no avail, when I spotted a drake Goosander on the far side of the lake, so I trotted round the path, watching out for hazards of boisterous dogs and speeding cyclists.

This Canada Goose was OK until I stopped, but was wary and headed for the water, so I grabbed a quick shot before continuing along the path.

I stopped to take some shots of the Goosander which, obligingly, cruised past at a distance of only about 50 metres, 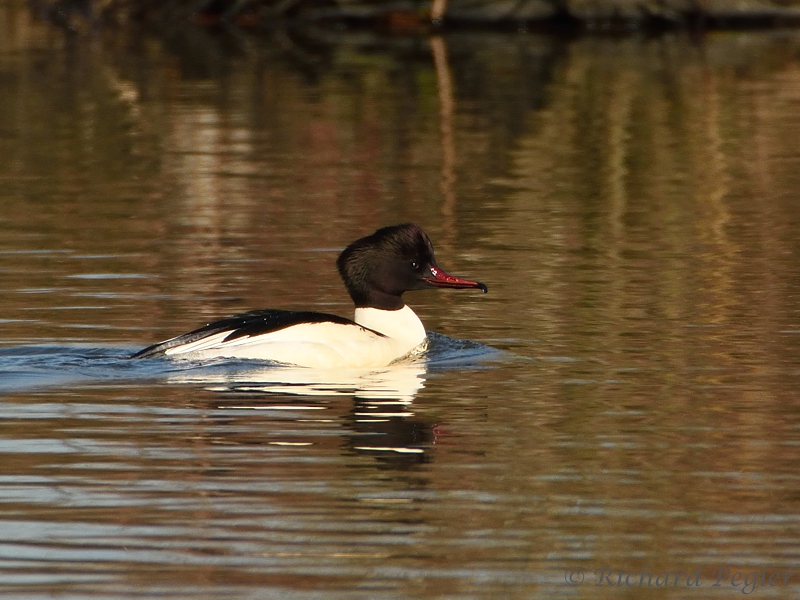 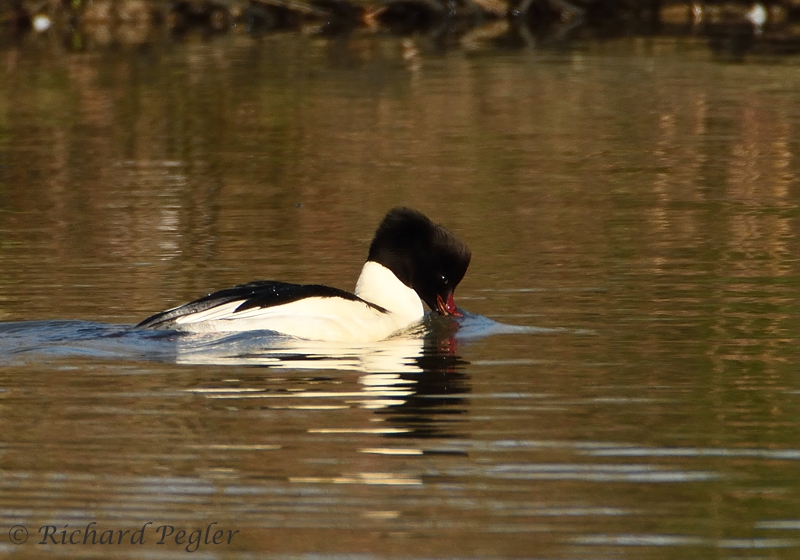 My feet were reasonably dry by this time and, as I didn't fancy getting them wet and muddy again, I decided to return to my car by road. This added approximately 1 mile (1600 metres) to my journey back but was well worth it.

Back at my car, I sat and relaxed for a while, watching the birds coming to the feeders, but no worthwhile photos resulted. It was time to head home and start cooking tea.

Thank you for dropping by - again, I'm not sure what my next post will bring. Time will tell!

Lindsay's greatly improved health meant that she felt fit enough to meet up with my daughter at a crafting session near Hinckley, provided I drove her there,  and a day of good weather had me greatly tempted to continue after dropping her off and go and do a bit of birding. I spent some time in the morning debating where my destination would be and decided on the Warwickshire Wildlife Trust's Brandon Marsh Reserve. This is a place that I have only visited once before (in 2016), but seemed to have much potential. I was, however, a little unsure as to what the place would be like at a weekend (because of numbers of visitors), and at this particular time (because we've had a lot of wet weather and it is prone to flooding - the clue is in the name!).

It was not encouraging, on arrival, to find the car park overflowing with cars, but I managed to find a place, and went and checked in at the visitor centre. I was pleasantly greeted and, because of my unfamiliarity with the place, handed a very helpful map of the site.

I exited the centre, passing by the packed-out café, and headed into the reserve. It soon became apparent that most of the people I were seeing were just out for a Saturday afternoon stroll, many with young children. Few had binoculars or cameras and, to my delight, there were absolutely no dogs, as dogs are not allowed on the site.

I first headed for Wright Hide, as I'd not been there on my previous visit. As I passed Grebe Pool on my left, a pair of Shoveler were engaged in a courtship 'dance', circling around each other - they were a delight to watch.

A little further on I noticed a Robin in the trees beside me, looking rather confiding. I stopped, and it immediately came to me. I wished I'd had the foresight to bring some bird food with me. However, it obliged by letting me capture its portrait. 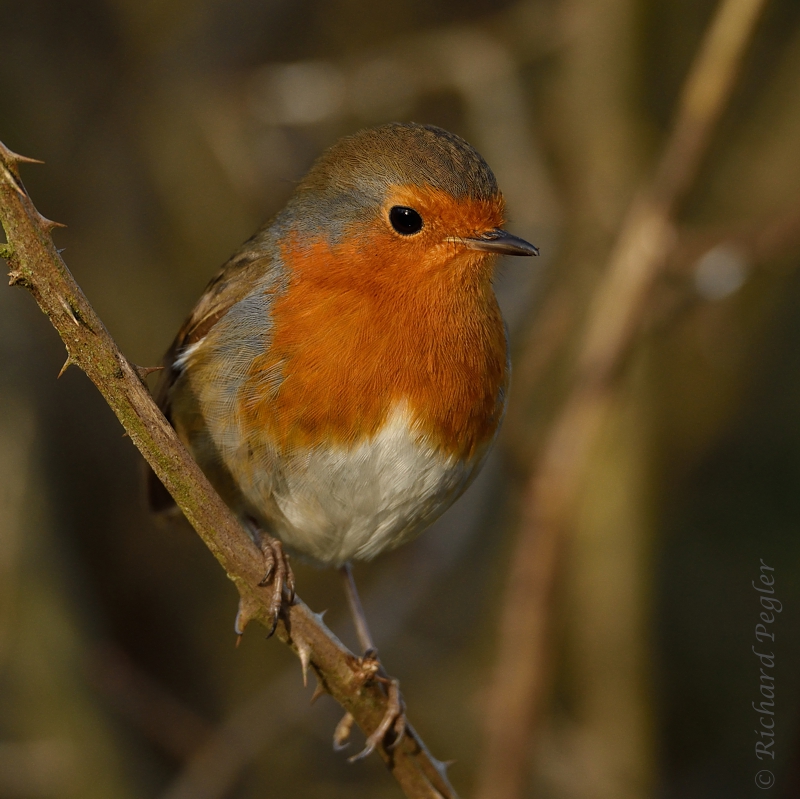 Arriving at Wright Hide, which overlooks East Marsh Pool, I found that the low sun was shining directly at me and I could barely see anything in front of me through the glare, so I left again almost immediately, and retraced my steps as far as the junction with the path that heads southwards to more hides, noting the splendidly-carved bench beside the path. En-route the Robin was now wise to the fact that I didn't have food for it, and ignored me.

The Robin obviously hadn't warned his friends that I wasn't offering food as, on approaching the junction, I was waylaid by another Robin, which was immediately joined by yet another! 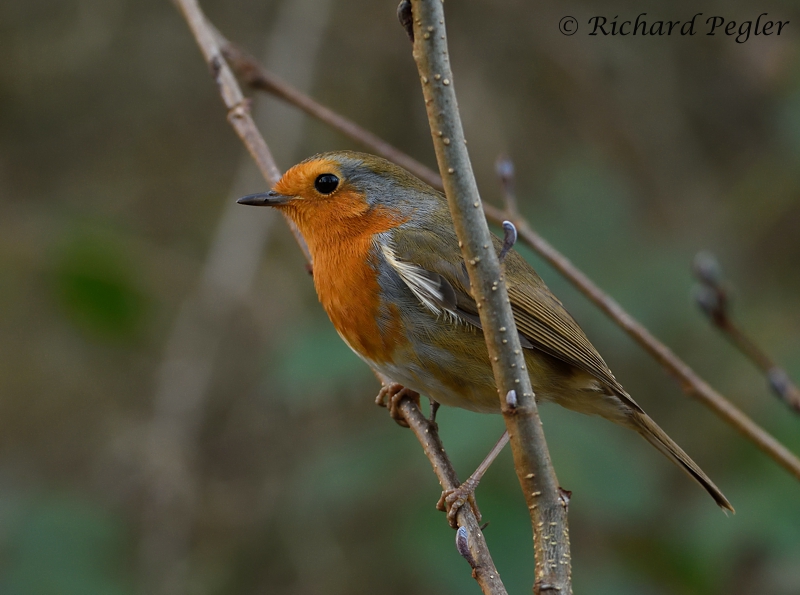 Next time I visit, I'll make sure I have some tasty morsels for these birds!

OK, so that's the last of the Robins - I promise!

A short walk took me to Jon Baldwin Hide, which also overlooks East Marsh Pool but had the sun behind it, and here I found three photographers already installed. There was little happening close to the hide, but some birds of interest in the distance, so it was definitely worth hanging around for a while.

Patience paid off when a Great White Egret flew in and landed at about 100 metres to the right of the hide, where it was largely obscured by trees on the bank. 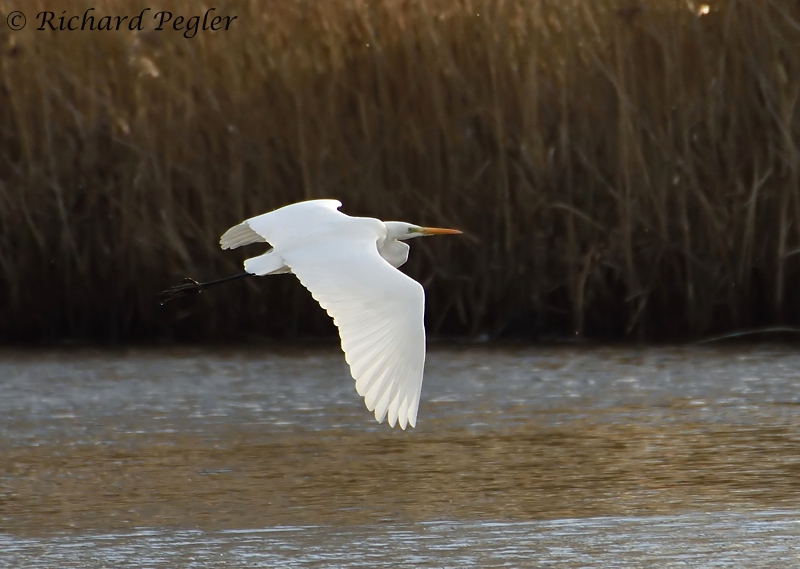 The egret moved further out of sight, and attention was paid to what was happening in front of the hide. Although an extremely common bird, a Tufted Duck is always a pleasant bird to see.

A call of 'Kingfisher' from the left hand end of the hide got my immediate attention. A Kingfisher had flown in and landed in the bushes behind the hide at a distance of approximately 30 metres. I'd been at the right hand end of the hide, but my companions very kindly let me get into a position where I could take a few shots. The bird stayed for around 6 minutes, occasionally dropping down into the water and then coming out onto a branch and preening - it was definitely a grooming, and not fishing, session. All the while, there was an extremely civilised session of taking it in turn to take camera shots. Here are a few from that session - all presented in the order in which they were taken. This bird was a female, as can be seen by the orange on the lower mandible. 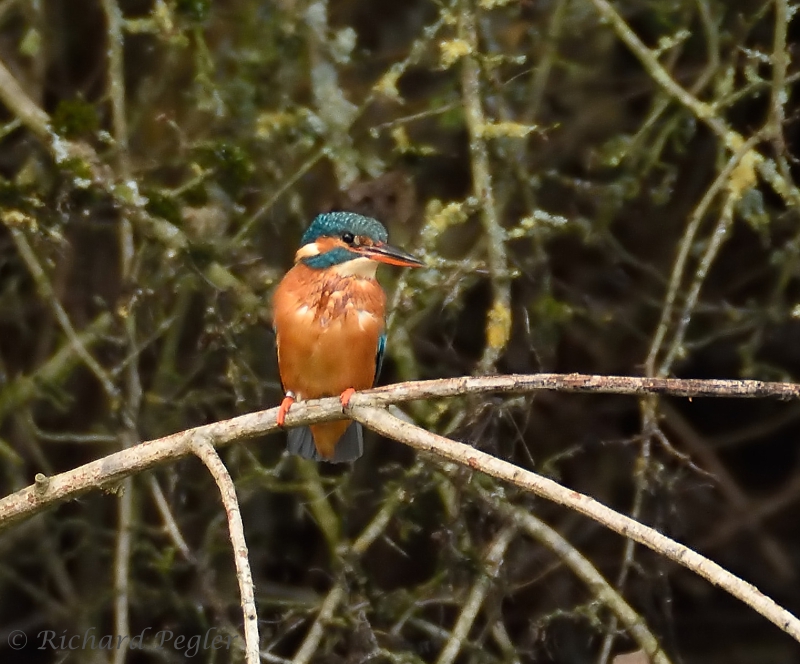 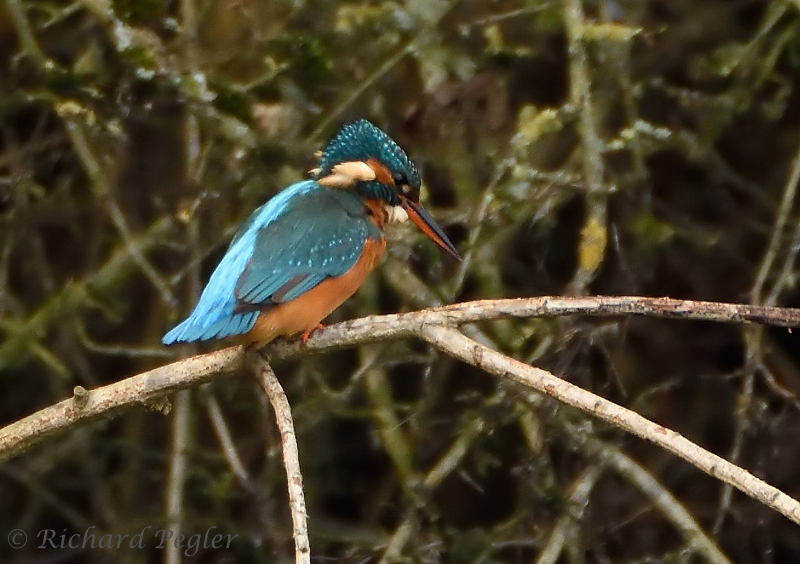 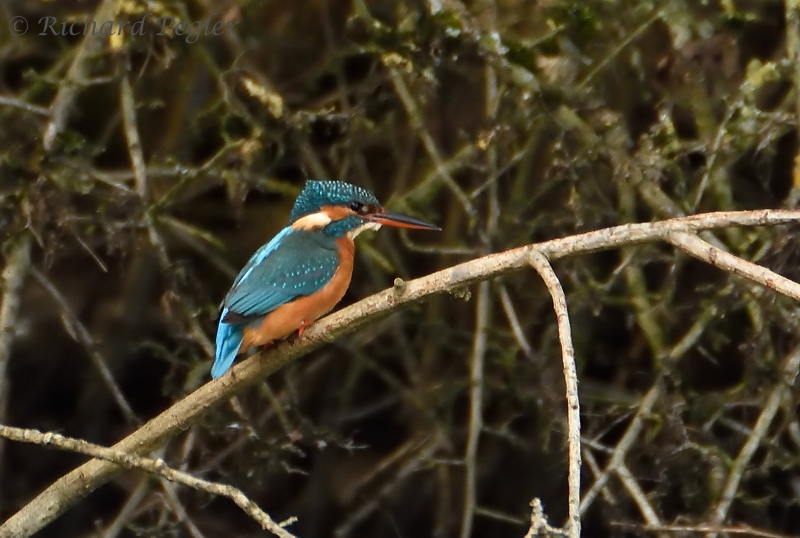 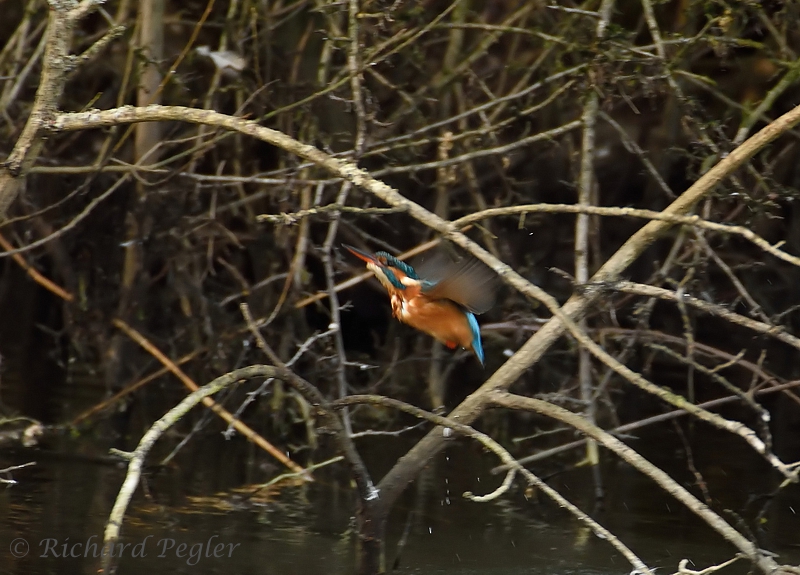 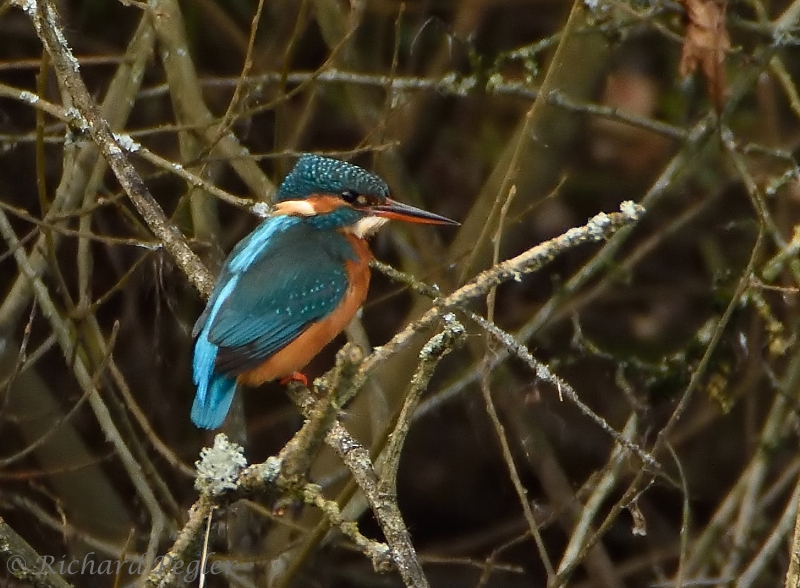 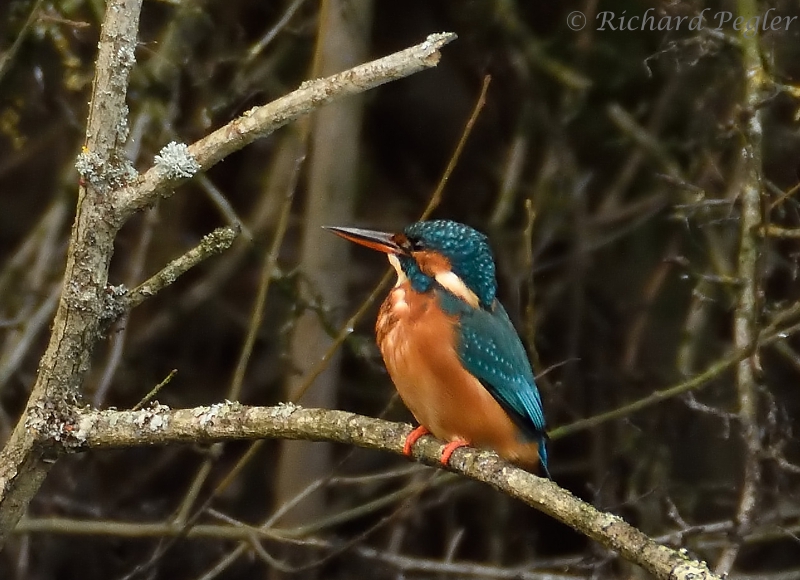 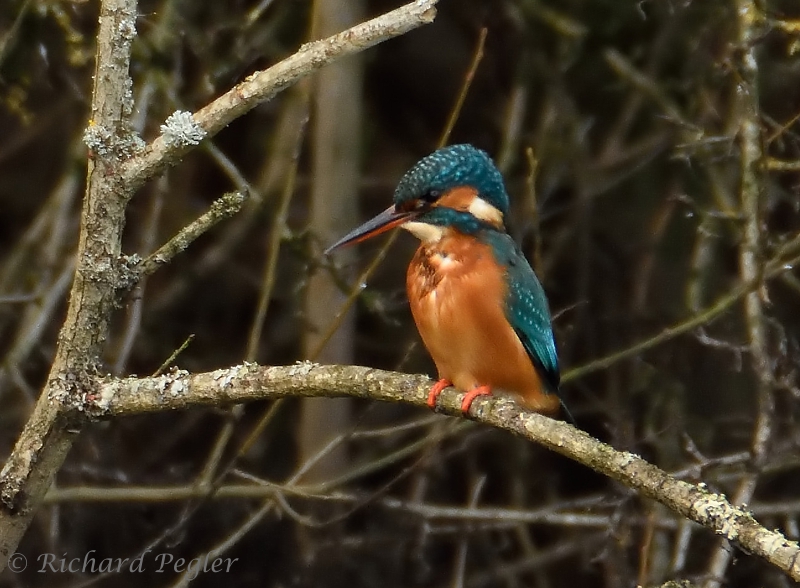 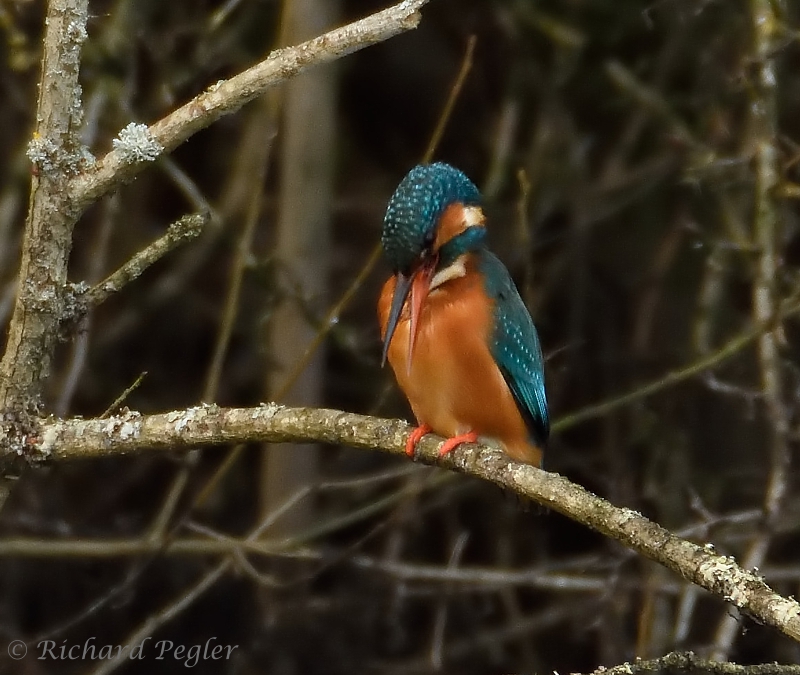 The Kingfisher then flew away from us through the trees and out of sight.

The Great White Egret had flown out of its hiding place to the far side of the pool. However, it returned to our side, but landed in a place even more distant than where it had originally landed. 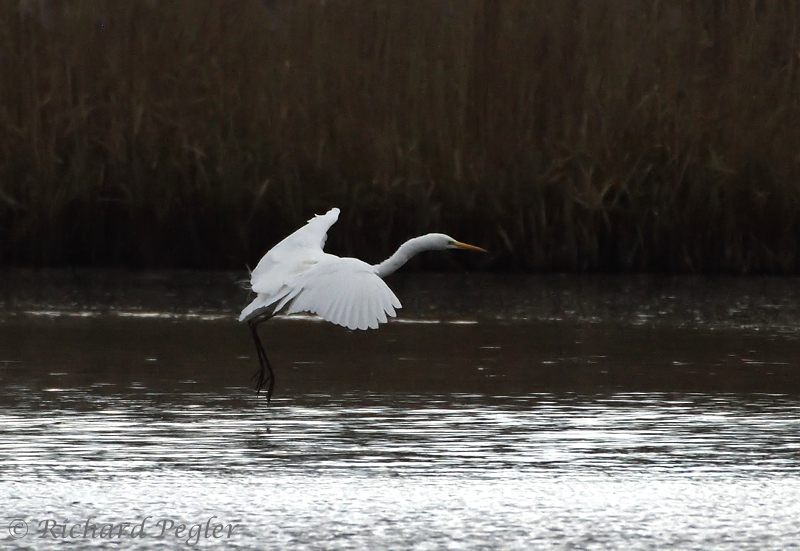 It soon turned around, and headed round the back of the reeds on the left of the above image. My companions, who knew the site well, reckoned that they'd get a better view from John Walton Hide, so rushed off there, leaving me to close all the shutters in the hide before I left to follow them! I needn't have worried, however, as I joined them and found that they'd had no luck. We sat and waited for some time and, for a moment, thought that we were in luck as an egret showed through the reeds, but it was a Little Egret.

I stayed for another 20 minutes or so, only photographing some Teal that were not far away, and a Cormorant that was.

I had now only visited three out of the eight hides on the reserve, and it was getting late so, at around 15h50, I set off to the hides to the south. A brief visit to Carlton Hide revealed nothing of interest, and Ted Jury Hide, which is the last on this southerly track, similarly came up with nothing during the 15 minutes I spent there - but I did take a shot with my phone of what I considered to be a splendid vista.

My intention was next to take the path that runs round Central Marsh, calling in at Mick Taylor Hide and Steetley Hide. By the time that I reached Mick Taylor Hide, the path had become very wet and muddy, and I could see that the mud on the path beyond was going to come over the top of my boots so, having had a quick look in Mick Taylor Hide, which now seems to have been renamed River Pool Hide, and seen absolutely nothing, I retraced my steps with the intention of heading homeward.

I briefly called in at Jon Baldwin Hide, and photographed a Gadwall and a Shoveler in the fading light.

I was about to leave, when I noticed that the Great White Egret was showing from beyond John Walton Hide, so I hurried back there again. I found that I had missed the best shot when the bird walked in front of the hide, but I did manage to catch it somewhat further away, before it disappeared round the back of an island.

I stayed for another quarter of an hour and it did, eventually, reappear from behind the island. However, the light was now fading fast, and it really was time that I was leaving.

It was dark by the time I arrived at the Visitor Centre, which was now closed, and so I left via the side gate, and drove home after a highly enjoyable afternoon. Fortunately, I was only cooking a simple meal for us that night, as I was quite tired after time in the fresh air. It had been great to be out with nature once more.

Thank you for dropping by - I do not currently have my next post up my sleeve, and so do not know what it will feature.

Thought for the day- should female Kingfishers be referred to as Queenfishers?