I did not get out much in February, mainly due to adverse weather conditions. Previous blog posts have already covered excursions in early February. Here is a short account of those that I made later in the month.

I'd been informed of Earthstar fungi along the disused railway course near my home which is now part of the Ashby Woulds Trail. I am not at all knowledgeable about fungi, but this particular species appealed to me because of its unusual form, and so I decided to take a look. In the event, I found something that I thought might have been one, and I have since been informed that it was one, but a very old specimen that had its 'rays' peeled back and decayed to the extent that they were almost non-existent.

Being a tad disappointed, I continued my search and soon found myself elated by the sight of a species of fungus that I have always wanted to see since coming across a picture of it - the Scarlet Elf Cup. I found several patches of this. It was a dull day, and there was relatively dense tree coverage so the light was difficult for photography. I did manage a few shots. 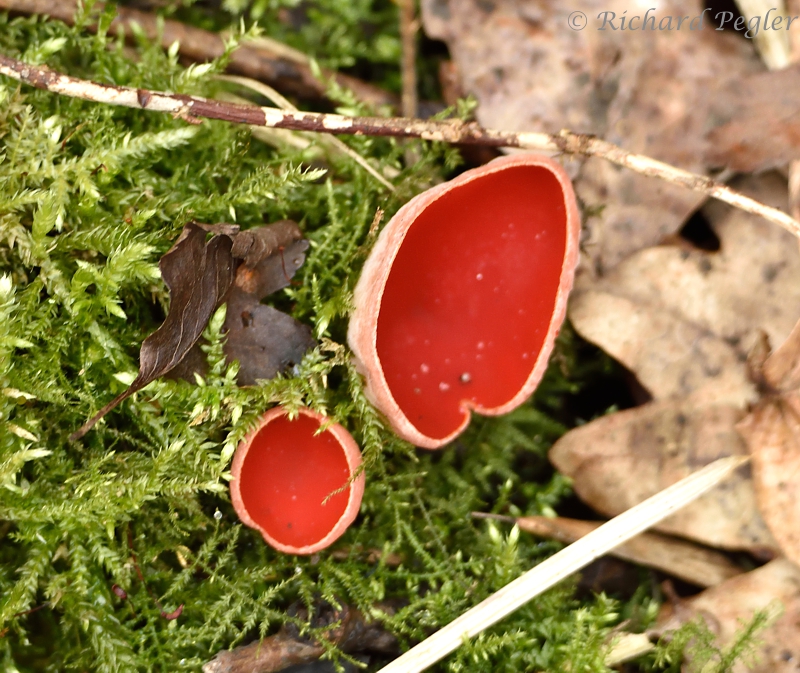 I understand that Scarlet Elf Cup makes for good eating, but it would seem a shame to pick such a beautiful thing - and Lindsay would never trust a fungus that I foraged, even if this is relatively unmistakable!

I photographed a couple of other fungal items but have absolutely no idea what they are.

Wednesday, 23rd February                       Hicks Lodge
I had limited time available this day due to two scheduled deliveries of materials for a garden construction project, and the delivery and installation (which failed!) of an oven for the kitchen. I did, however, manage to get out for a walk to Hicks Lodge.
In an earlier post I commented on how the small island on the main lake had been totally denuded of foliage and was no longer a haven for Snipe. All I'd seen on it were a few Lapwing and a gull or two. I was, therefore, surprised to see it almost covered by gulls on this occasion! I had a scan of the occupants, and only detected Black-headed Gulls.
Although nothing outstanding was seen, the light was quite favourable for photography.
....... and one for David! :-
Friday, 25th February                   Little Owl Site No.54 and environs
I'd made several visits to the site where, in January, I'd had my first sighting of Little Owl in 2022, and a totally new site for me. Sadl;y, I'd not managed to see the owl again, and was starting to think that this was a chance one-off sighting.
It was just over a kilometre from where I park my car to the place from where I'd seen the Little Owl.  As I walked along the lane, I was hearing the chatter of Fieldfare. A few flew overhead from time to time and some landed briefly in a tree at some distance. I grabbed a shot, and it was only when I came to view the shots on my PC that I found that I'd actually photographed a lone Redwing!
To my absolute delight, when I arrived at the point from which I could view where I'd seen the Little Owl, an owl was sitting in almost exactly the same place.
The owl was over 100 metres from a point from which it can be viewed, and there is no access to anywhere nearer. Unless I catch it away from this position, I do not stand much chance of getting any better shots, and as soon as the tree comes into leaf it will become invisible.
As I passed along the lane on my way back to the car, I stopped to photograph a distant Buzzard.
A little further on I was in Fieldfare country once more. I managed to photograph one that was momentarily in a tree ahead of me.
I then noticed a number of Fieldfare on the ground on the far side of a paddock adjacent to the lane. This one was a little closer.
I noticed one bird with the the group which, head-on, looked very different to the others, and appeared to be somewhat rufous with dark patches to the side of the breast. I started wondering if I had found an exotic thrush amongst them. My binoculars were not powerful enough to see clearly what I was looking at. The bird stayed adjacent to the far fence and I spent quite some time trying to get shots of it. It was only when I got home again and examined my photos that the penny dropped. I don't see Fieldfare very often and, when I do, they are invariably in winter plumage. This was a Fieldfare that was well into breeding plumage. At this distance, I did not get good shots, but the following two might help you understand the situation. 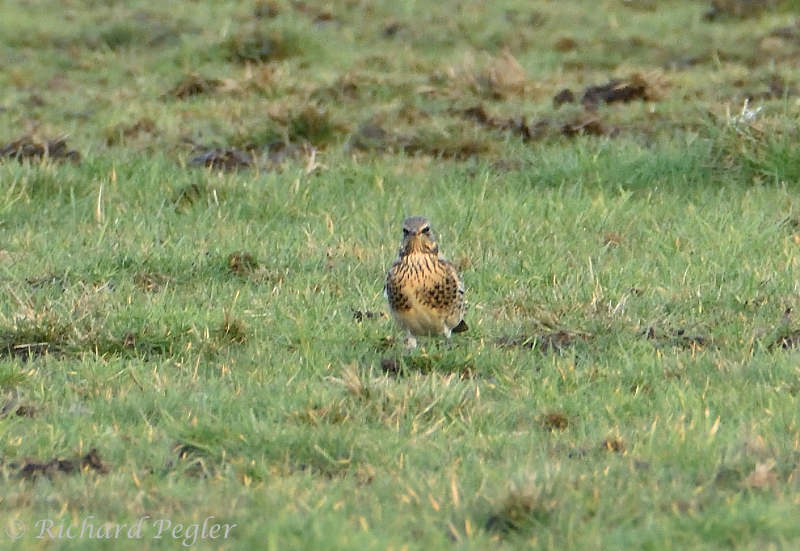 The most common gull in these parts is, by far, the Black-headed Gull. This is probably because at this location I was about as far from the sea as it is possible to get in England. Just to keep my hand in, I attempted a shot as one passed overhead.
This brings me to the end of my blog post. As Lindsay and I have just returned from a week on the Isles of Scilly, I am hoping that my next blog post will feature at least part of that visit.
Until then, I wish you all the best - take good care of yourselves and Nature - thank you for dropping by - - - Richard

I have already covered a couple of local visits in February in my previous two Blog posts, and I intend to cover two further February excursions in a subsequent blog post. This post will concentrate on garden observation highlights - and a couple of items of wildlife found in the house!

At the start of February, our winter visitors, Brambling, Blackcap, and Pied Wagtail, were still regularly gracing us with their presence. As I write this on 1st March they are still visiting. I have no illusions that Brambling and Blackcap will be with us for much longer, but I am hoping that the Pied Wagtail might decide that he'd like to stay here.

The month started well with male and female Brambling, plus two male Blackcaps. However, no photos were taken.

This day I did manage some photos. 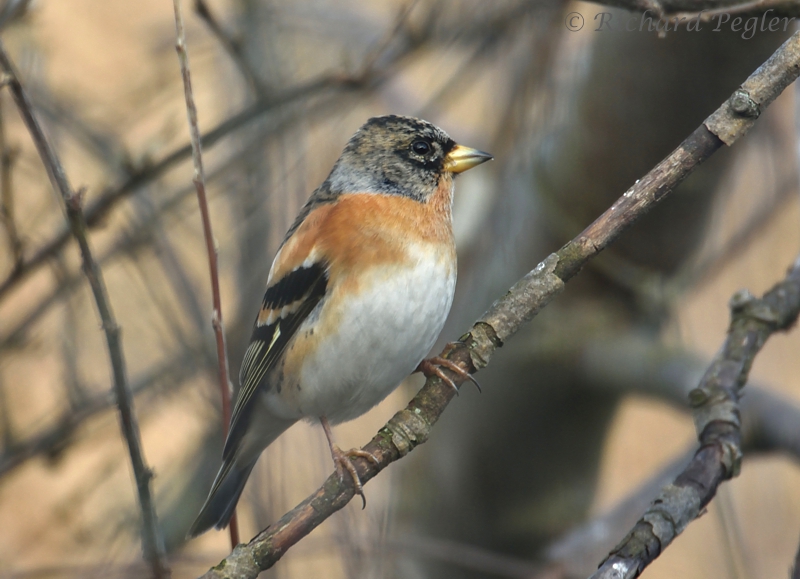 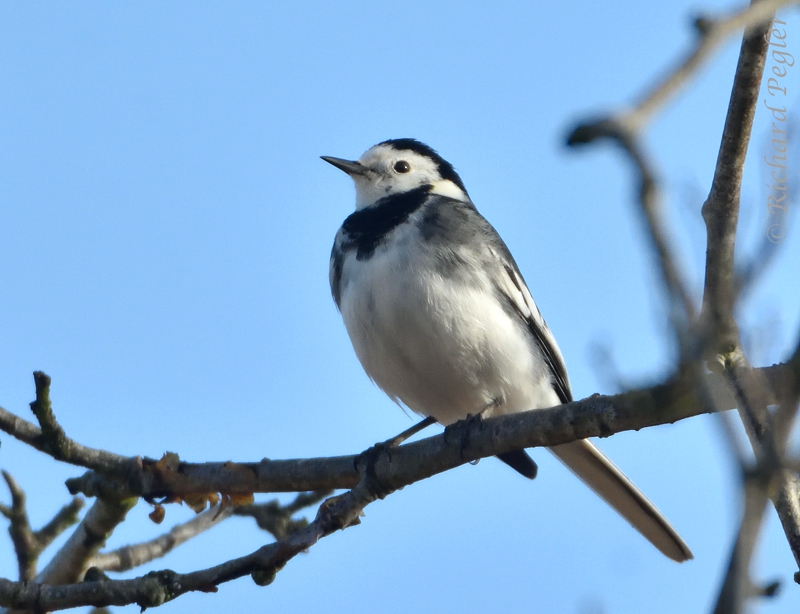 We had three Blackcap visit this day (2 male, 1 female) but they were not photographed. We have been lucky enough, in the past few weeks, to be getting daily visits by Bullfinch. We have had occasionally up to three at a time - sometimes two females and sometimes two males. However, it is rare that they present themselves in a photogenic position. These was my best effort in February.

In January, it was a female Blackcap that dominated our sightings of that species. However, in February this switched to males giving us most sightings. On this day we had one of each and I managed a shot of a female Blackcap looking coy.

It has been a long while since I posted a video clip from the garden cams, This is mainly due to nothing happening at night! However, if I omit to reset the timers for a while when the days are getting longer, I sometimes get some daylight action. It's a very common bird, but for me it's delightful to see a Robin bathing in what we refer to as 'the duckpond'.

It had been some months since a Sparrowhawk last set foot in our garden, although we'd seen one flash through from time to time. It was, therefore, pleasing to see a juvenile visit us on this day. Sparrowhawks, for me, are very welcome, provided they don't visit too frequently. However, Lindsay takes a different stance, insisting we should dicourage the Sparrowhawks as, by attracting good numbers of birds to our feeders we have a duty of care, and should protect them from predation. Sadly, the weather was very dull this day and the photo is not as crisp as I'd like it to have been.

We had 21 species of bird visit us this day, with highlights being three Brambling (2 male) and an unphotographed Siskin. Regretably, I did not manage a shot of a female Brambling

The Sparrowhawk was making a nuisance of itself this day and bird numbers were well down, although we did have three Brambling show up. The light was rather better than on the previous occasion that I photographed it. 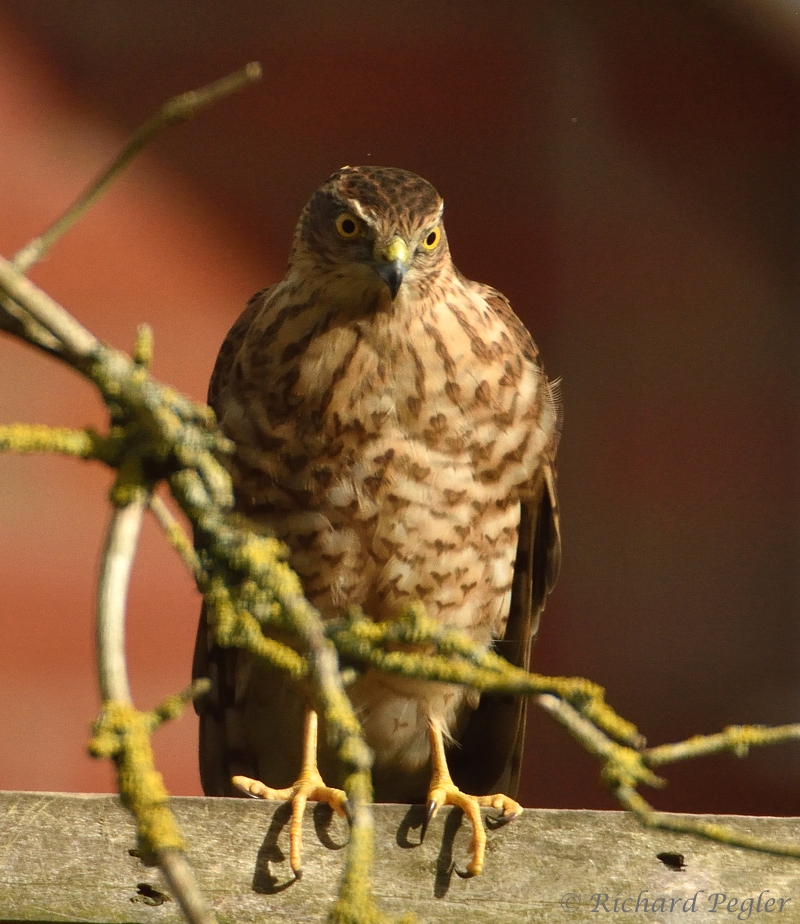 That night a micro-moth snuck into the house and was found by Lindsay in the kitchen the following day. There are quite a few species of micro-moth in UK with this distinctive 'T' shape.
Thursday, 24th February

The previous day, I'd been to a location which, until just a few years ago, used to be a winter hotspot for Yellowhammer, Willow Tit and Reed Bunting, and I found myself reflecting that I'd not seen any of these three species here for a couple of years. I was, therefore, delighted when a Reed Bunting very briefly showed up in our garden for the first time in a long while. Unfortunately, I only managed a record shot.

The morning overrunning of the garden cams caused me to catch Magpies at the 'duck pond'.

The moth trap went out on this evening. It resulted in just two moths of two species, but included my first ever Oak Beauty.
The Pale Brindled Beauty wouldn't play ball and ended up being photographed on my trouser-leg! This is a male - the females are flightless.
Saturday, 26th February

OK, so not a highlight, but I thought that this post could do with a bit of colour, so here's a Goldfinch from that day!

This was another good day for garden bird sightings. The real highlight was our second Redpoll of the winter. I did manage some record shots.

It was a sunny day, and we had our first butterfly of the year to settle in the garden - we had seen a few pass through before this, however.

I'd been concentrating so hard on the butterfly that I failed to notice the hoverfly that settled nearby.
Monday, 28th February

On the last day of the month, I found another moth in our kitchen. It was a Dotted Border - I wonder how it got its name!

This brings me to the end of this blog post. I've got a very busy time ahead, and so it will probably be a while before my next post, and I may be a little tardy in replying to your comments por visitng your blogs. In the meantime, thank you for dropping by. Please take good care of yourselves and Nature. Best wishes - - - Richard