My pal, John (see footnote to this post), had told me of a fishing pond behind his property, where Emperor dragonflies were present. I've been pretty-much tied up with domestic projects lately but feeling a little stir crazy and it being fine weather, I decided to take a couple of hours or so out, and visit the location, calling in at my local patch to talk to the farmer first.

As I was not sure how long I'd be at the farm (about three quarters of an hour as it turned out) I'd not said anything to John about my visit, but was going to give him a call when I got there. To our amusement, John had arrived there just a couple of minutes before me!

I'm pretty sure that I'll have seen an Emperor dragonfly before my interest got well and truly sparked by the Odonata, and I'm 95% certain that I saw one by a different fishing lake on 24th June when my wife and I went out to lunch to celebrate our wedding anniversary, but I've never photographed one.

One was instantly spotted when we started to look, but in an inaccessible place. We took a wander around the perimeter of the pond, and spent a good half hour trying to photograph a male specimen. It seems however that this quick-flying species rarely settles, and we were having no luck at all capturing one in flight at a great distance.

Even when one came much closer, and started to interact at high speed with a Four-spotted Chaser, we just couldn't get it in frame for long enough to achieve focus. I mentioned to John that, at this rate, our best chance was to hope for an oviposting female. I did get some shots, however, of the Chaser, which I believe, by the shape of its anal appendages (I'd never have guessed I'd use that expression in writing!) to be an immature male - please correct me if I'm wrong. Update:- I've been told by my good friend Noushka, who knows about such things, that this is a fully mature male. I've modified the caption accordingly. Thank you, Noushka! 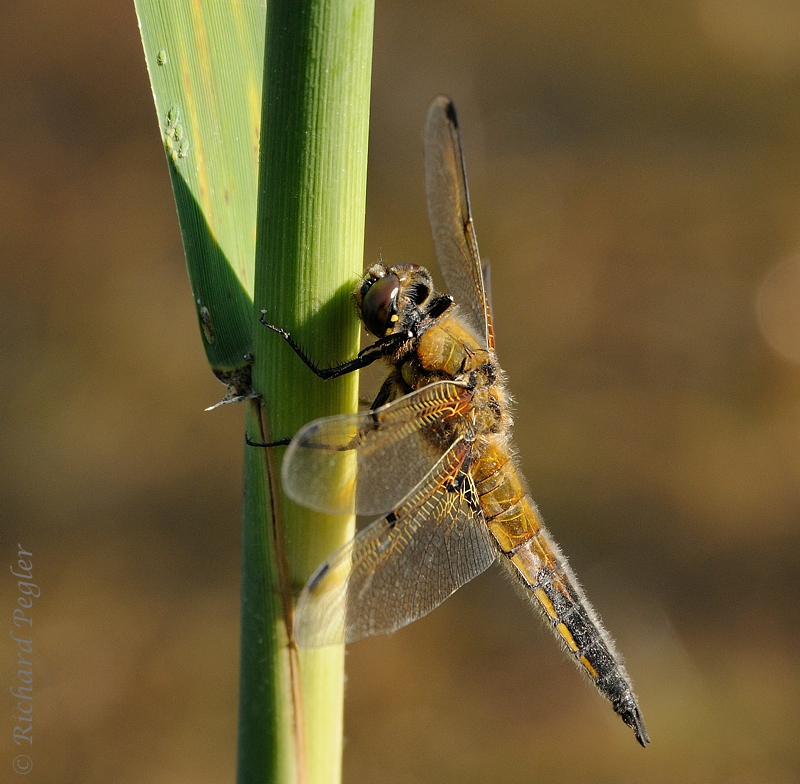 After probably 15 minutes or more of trying, John suggested moving round the pond by around 45 degrees as he'd previously observed that they slow down somewhat when flying into the wind. This proved to be inspirational as a  male Emperor was soon spotted which seemed to habitually slow down when it got in front of us. I had to choose between high ISO (= noise, but faster shutter speed to freeze wing movement) and low ISO (a clean image for detail, but with movement blur). I went for 1000 ISO, which is about as high as I can push it without serious noise and significant loss of detail kicking in! 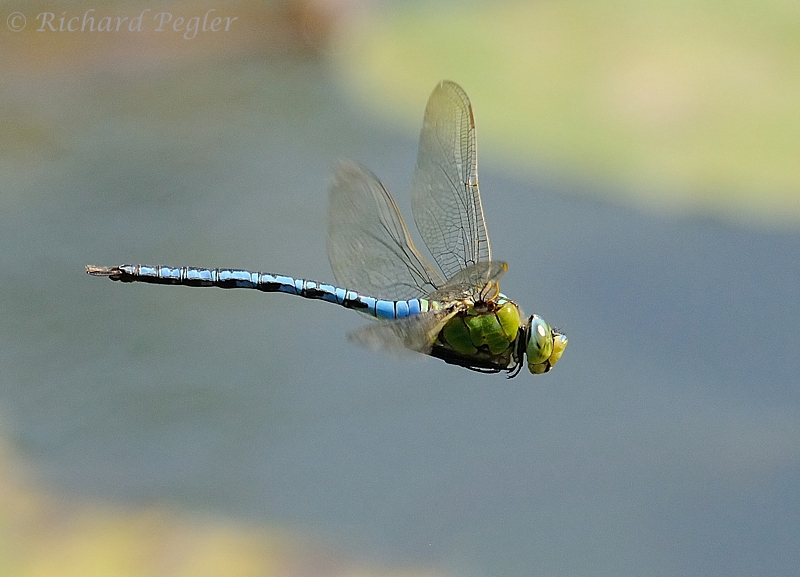 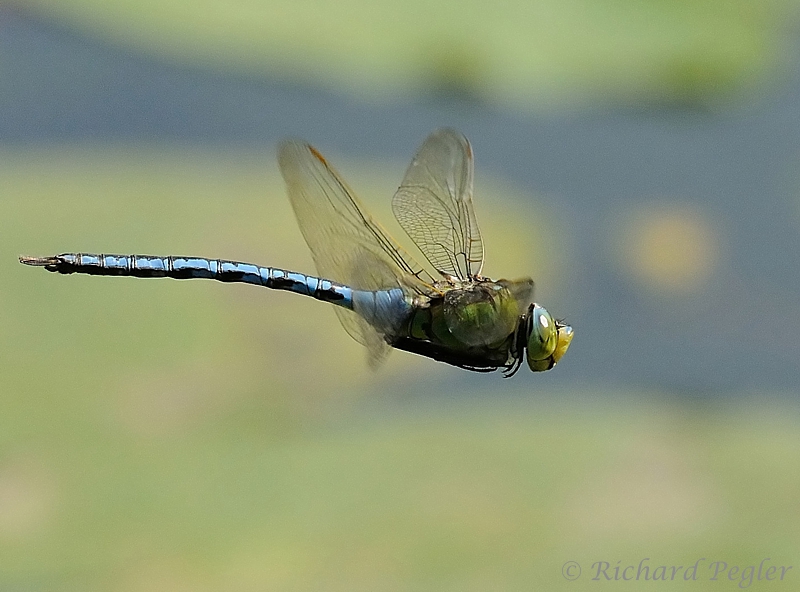 I was still trying to get more images of the male Emperor when John beckoned me to where he was. There, close in, and hidden from my original position by reeds, was an oviposting female Emperor! 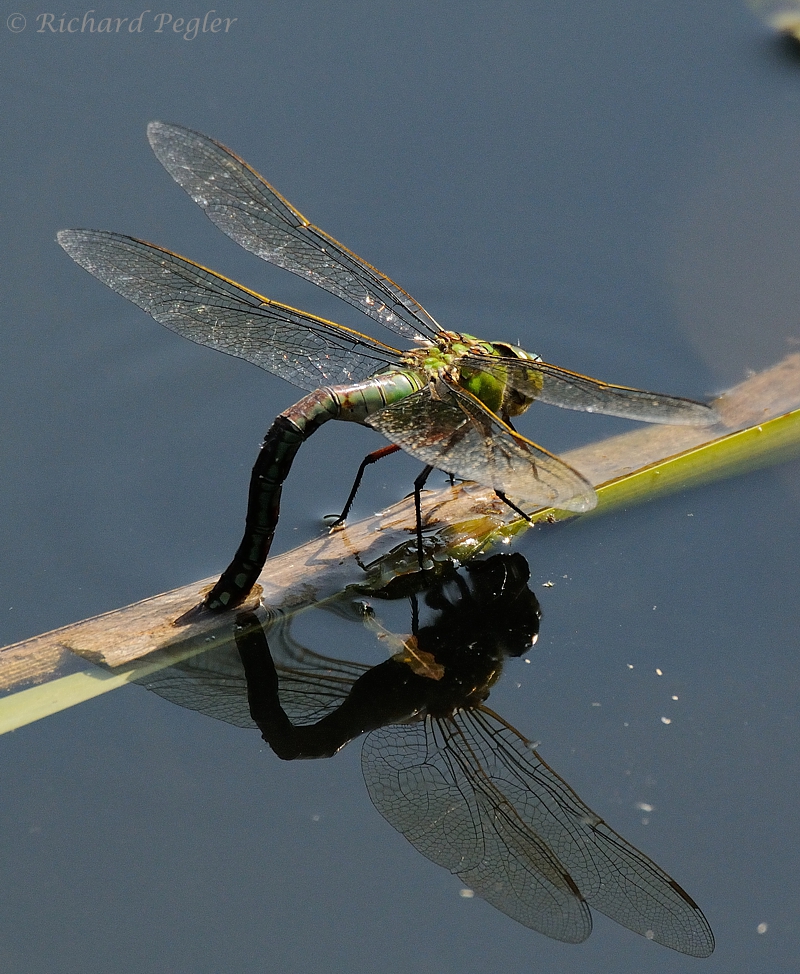 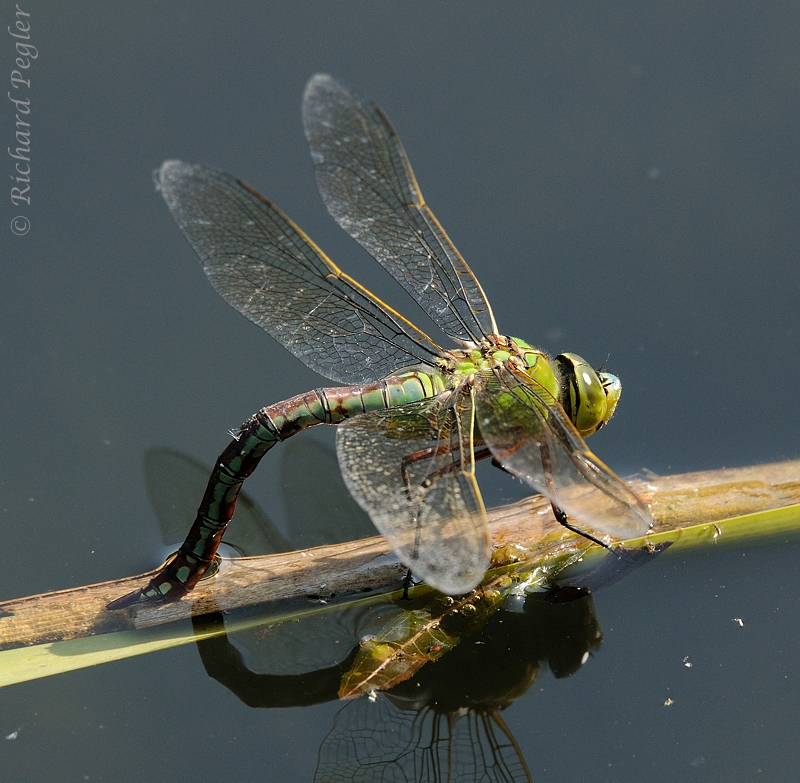 At one point there was a brief aerial interaction between the female and the male but it all happened too quickly for us to capture. After a solid hour of waving around a hand-held heavy camera and lens my arms were aching and it was time to call it a day. I suspect that I will not have time to visit again before they're gone until next year, but it was a most enjoyable session. Thank you, John.

Thank you for dropping by. I'll try and get another post in during the next few days, but if I don't, please don't be concerned if there's an even longer period than usual between my posts. I've got friends from Canada coming to stay for two and a half weeks and I'm almost certainly going to be preoccupied with enjoying their company and wall-to-wall birding!

Footnote: For ages now, I've referred to my pal, John, as 'Titus'. In the early days of our friendship he asked me not to use his name in my blog posts if I was referring to the Barn Owls which he had in his garden as he didn't want to be pestered by people or have his owls disturbed. I came up with Titus White as an alias for him (Barn Owl = Tyto Alba) - something that amused John as, unbeknown to me at the time, his dad's second name was Titus! John has adopted the name Titus John White for his own blog usage, and openly refers to himself as John, so I though I might as well do the same from now on. John is his real name but White isn't, so there is still an alias there.
Posted by Richard Pegler at 11:41 30 comments:

For my birthday, our wonderful daughter, Melanie, kindly bought me an hour's photographic session with a falconer, Simon Tebbutt. I have mixed feelings about falconry, as I prefer to see birds in the wild, and sometimes I get the impression that there is little love lost between falconer and his birds. However, they do serve a useful purpose in getting people closer to the birds so that they can appreciate these splendid creatures and, hopefully, gain greater respect for their wild counterparts.

For the wildlife photographer, there are other benefits. An orchestrated photo session allows one to play with camera settings to establish what is best for the combination of plumage and light. Even more useful is the opportunity to hone one's skills for flight shots, if the session includes flying, as this one did - overall, an extremely useful practice session

The session was booked to be between 14h00 and 15h00 and I was asked by the falconer to be there by 13h30. As it was to take place near Rutland Water, I used my usual owling route for most of the journey, having a picnic lunch en-route - but only spotting one owl on the outward. I arrived in good time, but my confidence was not boosted by, after 13h30, people asking if I was the falconer. In the event the falconer and his daughter arrived a little after 13h45.

We were walked down to an area of grass where falconry facilities were set up. I was the only person for the photography session, the rest of the group (approximately 12 persons) were there for a two-hour handling session. We were then given the necessary Health and Safety briefing.

I was then taken by the falconer's daughter to the area where the birds were being held. They'd brought five birds;- a Barn Owl, an Eagle Owl, a Goshawk, a Harris Hawk, and a Red-tailed Hawk. If you know me, you'll not be surprised that I opted for a session with the Barn Owl first. I'll also point out that the light kept changing from brilliant sunshine to heavy cloud, and back - not easy when your subject is primarily white!

Just a quick note. Contrary to my normal practice these days, I'll not be giving scentific names for the species as cross breeding is rife in the falconry industry. Furthermore, I did consider doing some removal of jesses, etc. in the post processing but decided against it as that would be falsifying the record. 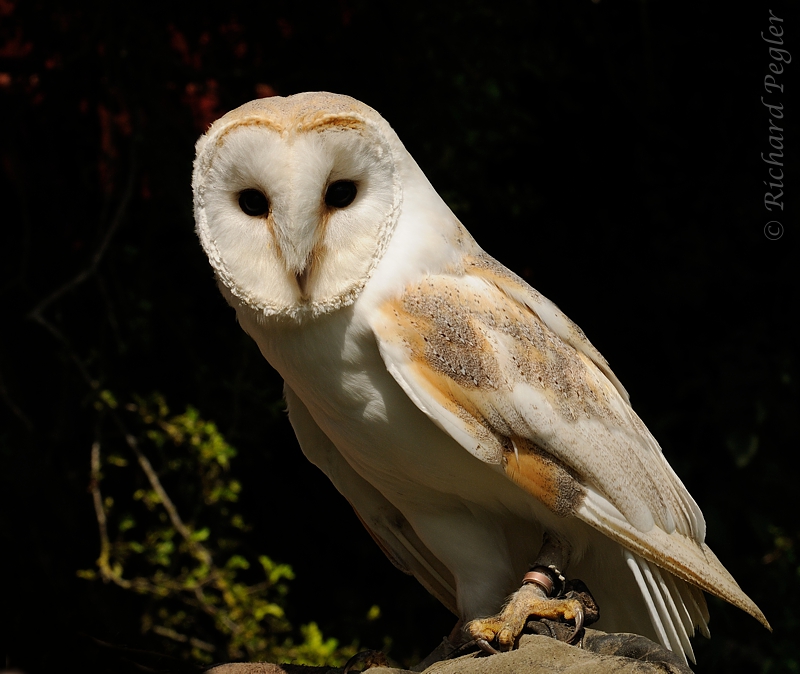 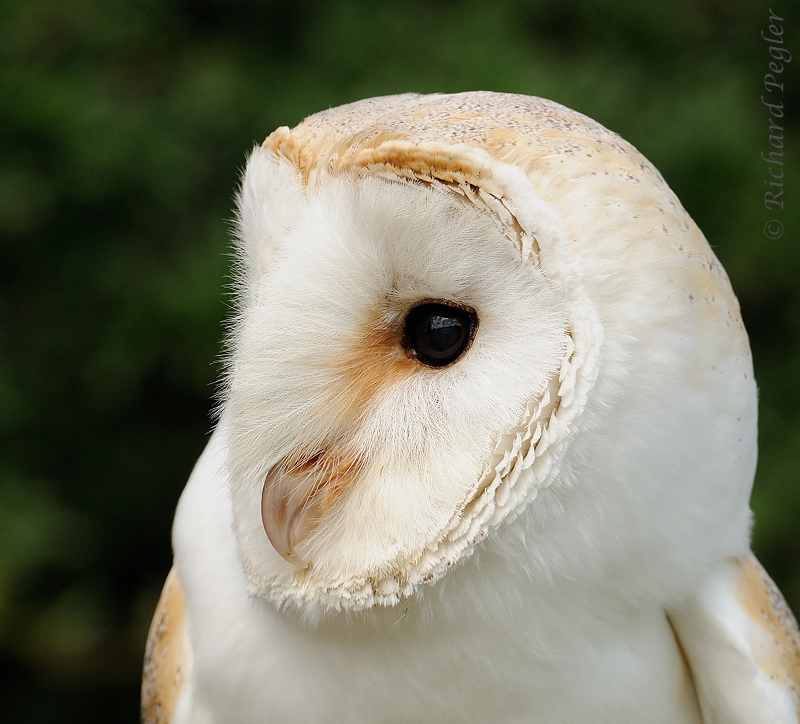 Following this, I had a session with the Eagle Owl. Doug and Noushka, if you're reading this, have a look at those feet in the second image - my, that bird looks powerful! 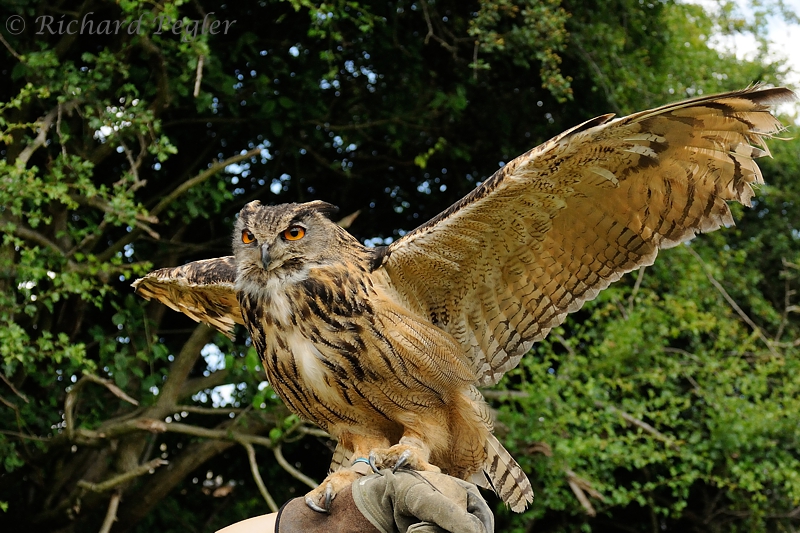 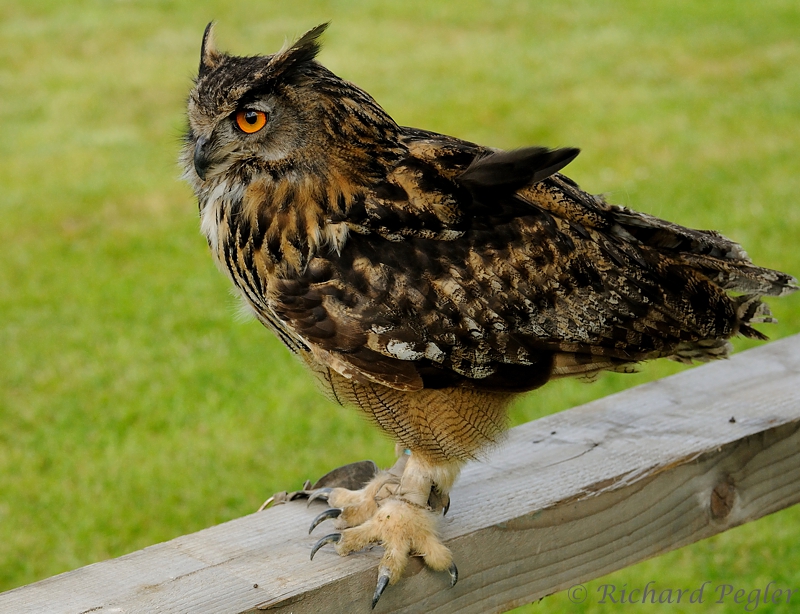 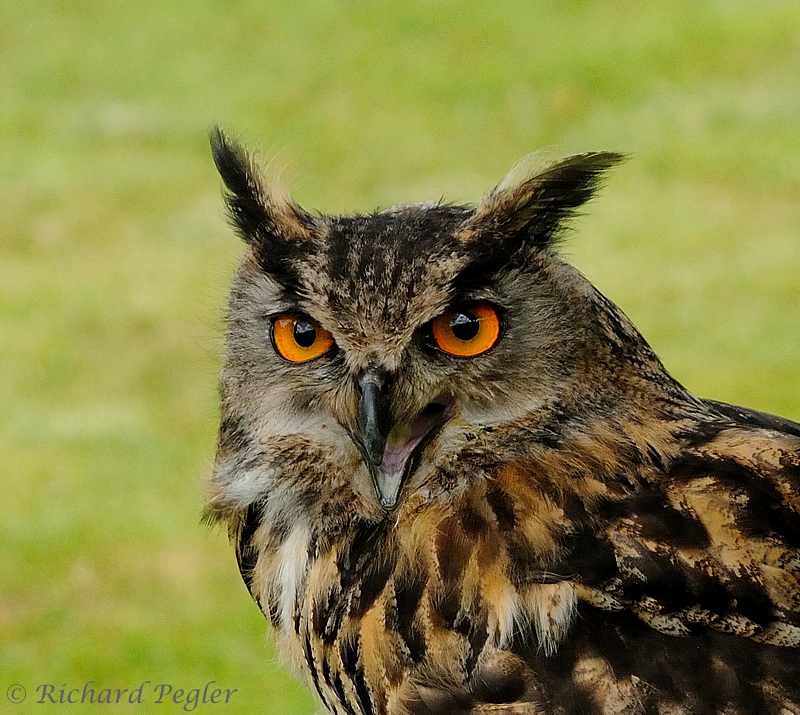 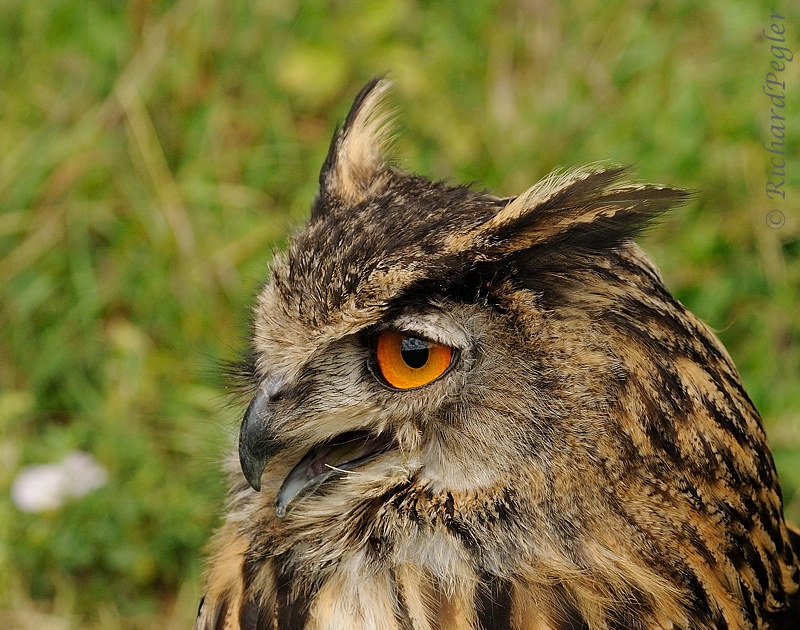 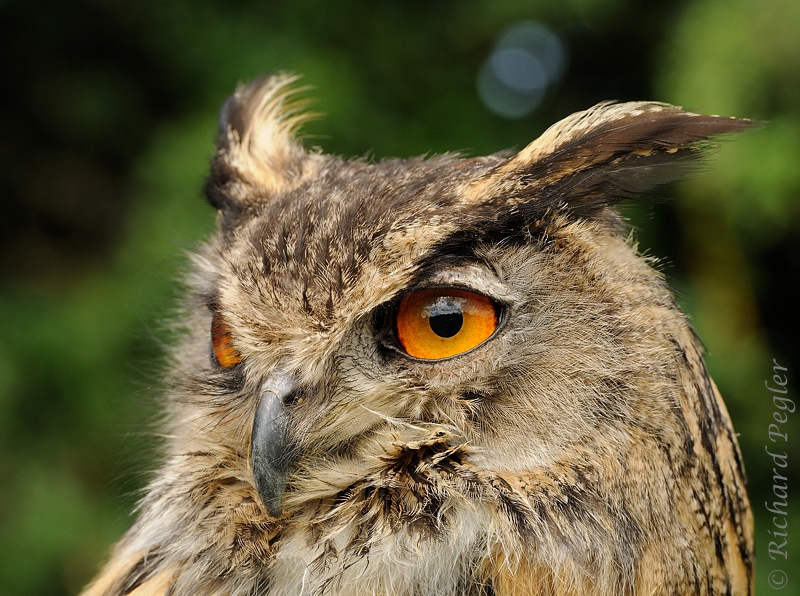 Having tried some shots of the Eagle Owl in a different location, I asked for another session with the Barnie at that location too, but it didn't work so well.

I'd missed the flying session with the Goshawk whilst the above was taking place, but I was called over for the flying sesion with the Harris Hawk. I was told that, because this is not an everyday venue for these birds, the birds had to be tethered or there would be a risk of losing them. A very long cord was attached to the jesse of the bird, with the other end being held at the receiving end. The falconer's daughter (sorry, but I've forgotten your name) took the bird to the limit of the cord and, on indication from the falconer, released the bird which then flew to the baited glove. Here's a few of the Harris Hawk. 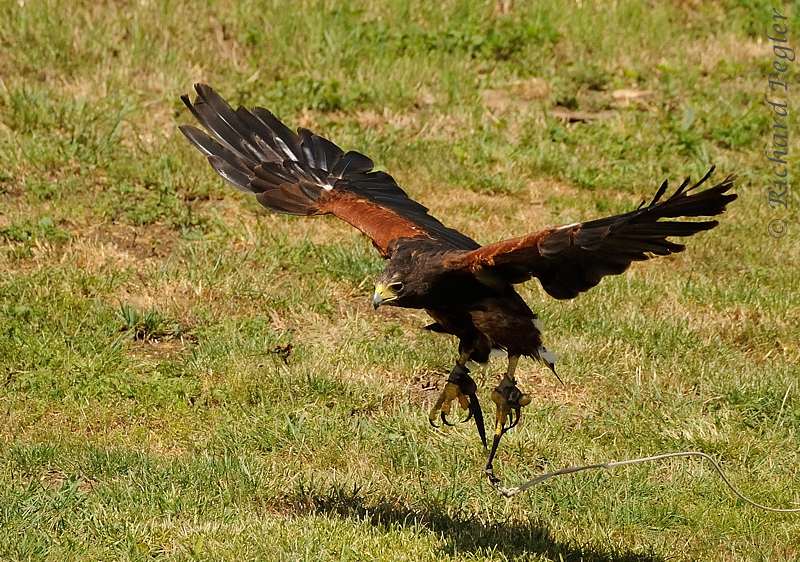 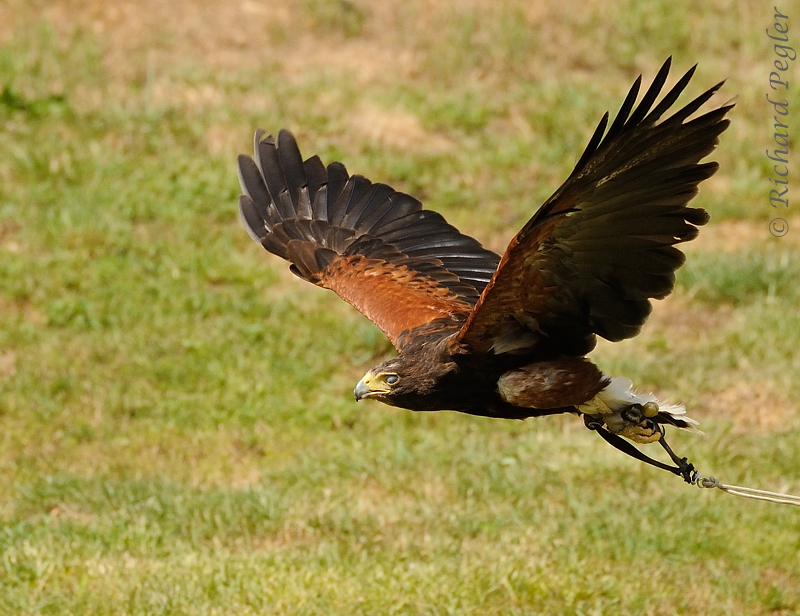 Whilst the falconer was setting up for the Red-tailed Hawk, I had a static session with the Goshawk. I'd have loved to had a session with this one flying! 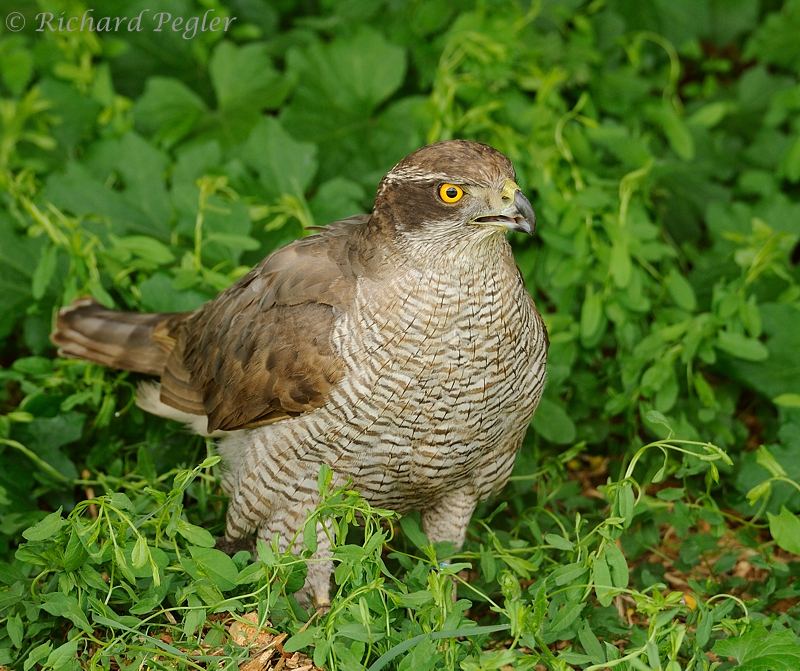 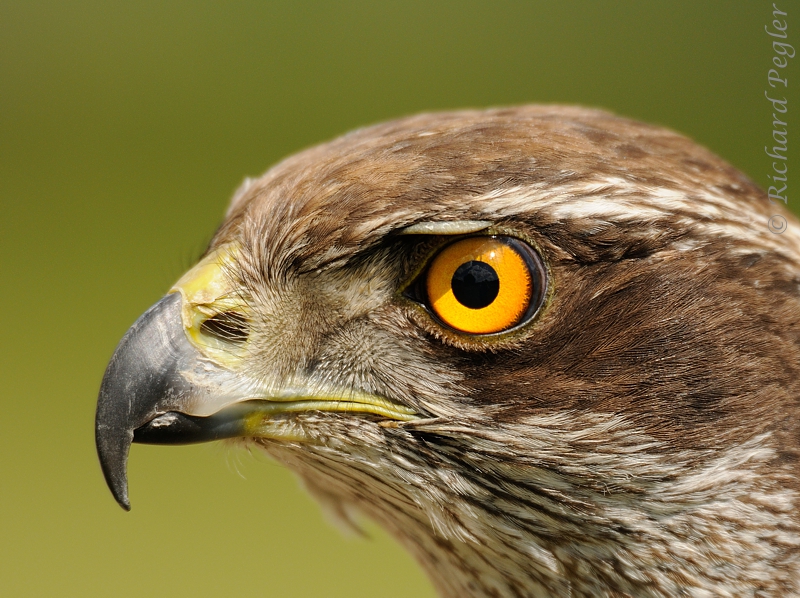 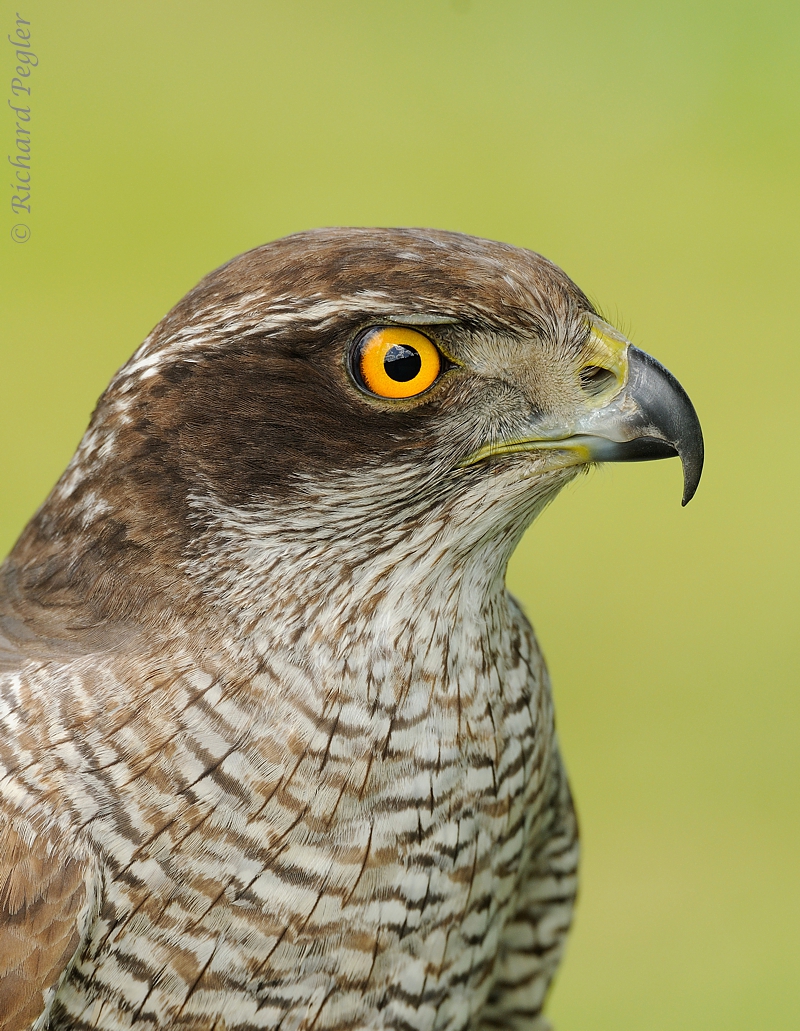 The finale for my session was with the Red-tailed Hawk flying. 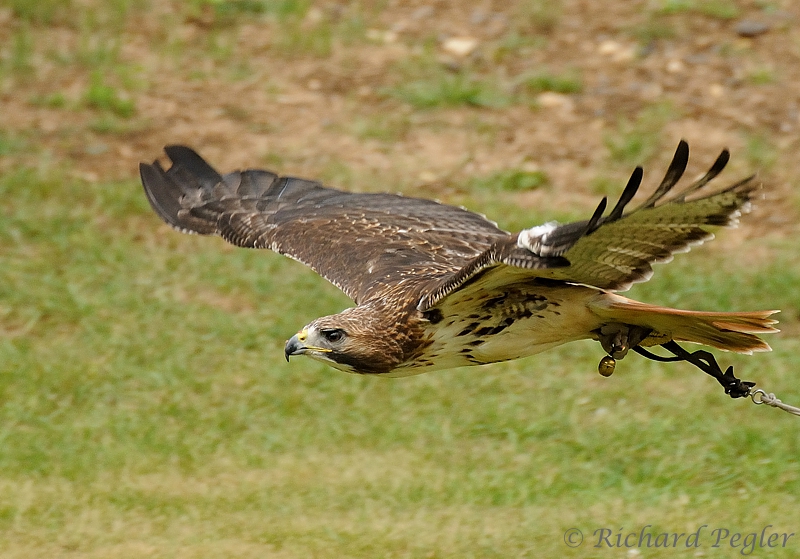 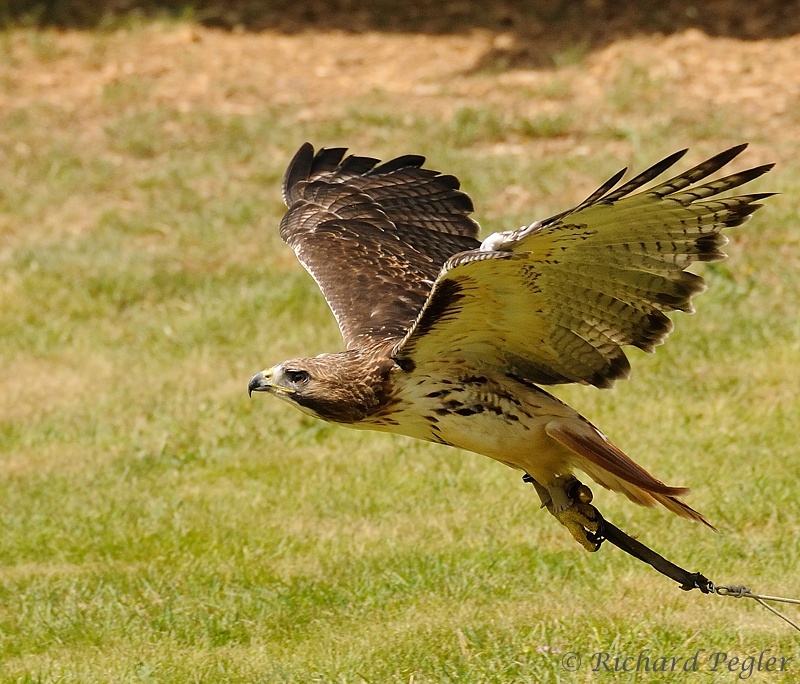 It had been a very interesting and exciting experience and, by the end of the hour, I'd fired off 772 frames!

Wanting to make a day of it, and not being expected back for tea until early evening, I headed off for the Egleton side of Rutland Water. My main objective was to find some dragonflies, but I wasn't over-successful.

By the small pond near the visitor centre, I photographed a couple of butterflies. 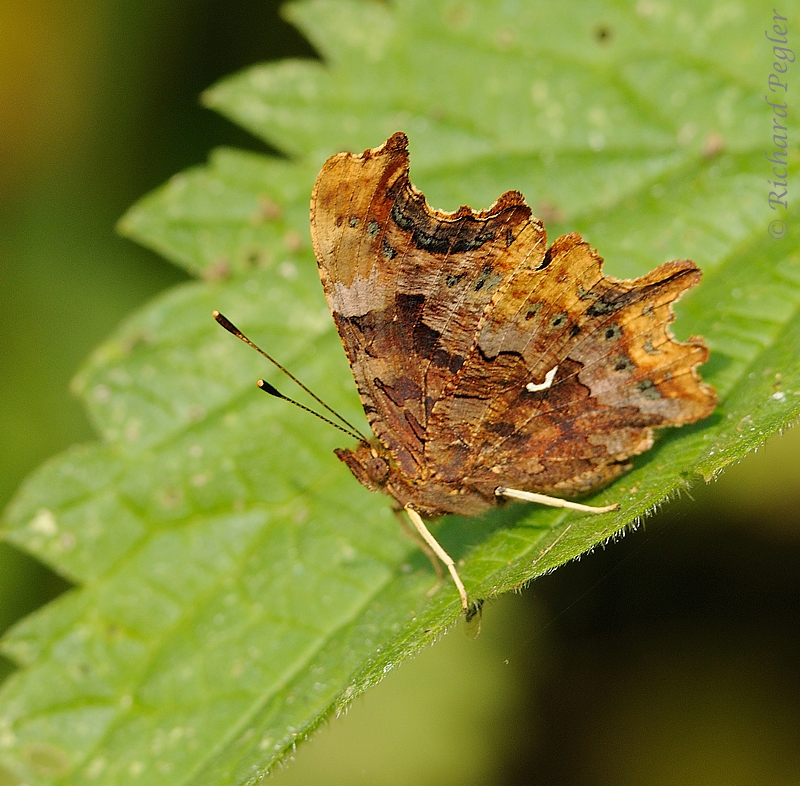 On the way to Redshank Hide, I stopped for a while to try and get some images of a male Banded Demoiselle. There's plenty of room for improvement in my efforts, but these are some of my better ones! 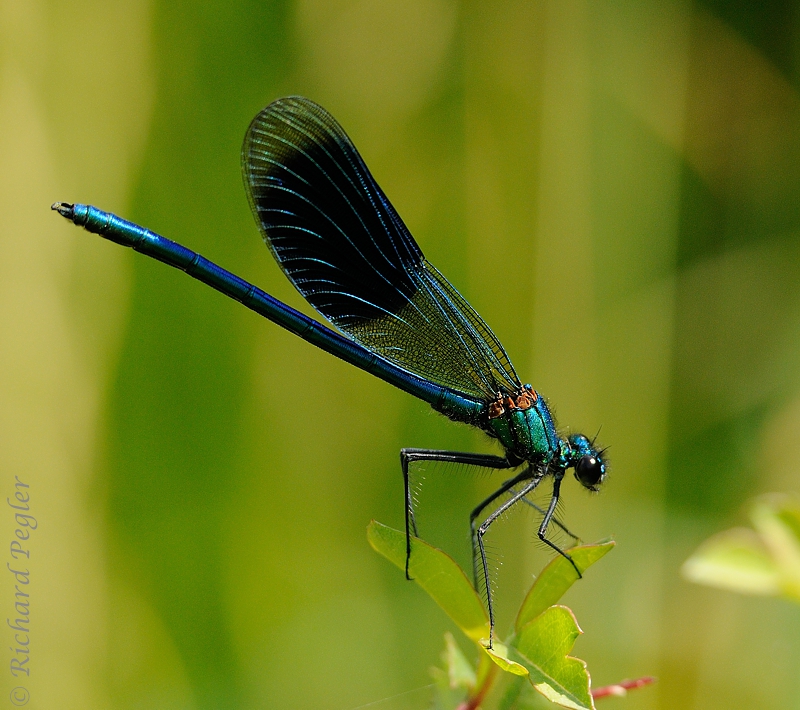 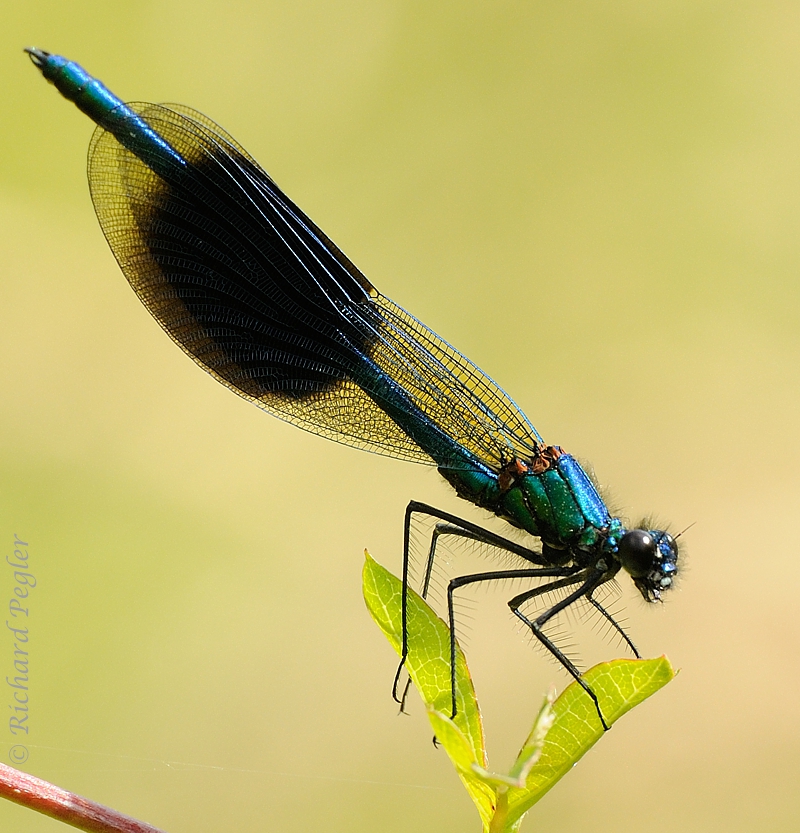 On the approach to Redshank hide there were a number of damselflies, including Common Emerald, which I tried to photograph and failed miserably. I did, however, manage some of Common Blue Damselfly and of Ruddy Darter.
From Redshank Hide there was little bird life showing. I did see Brown Hawker, and probable Common Darter dragonflies, and also this distant Four-spotted Chaser.

It was now time for me to start setting of homewards. The day was truly completed by seeing Little Owls at four different sites on my way home, although none were photographically cooperative! I can't leave a post with Little Owl sightings without an image, so here's one from that day.

I'd had another splendid day - thank you Melanie, and shot well over a thousand frames! Thank you, also, to Simon Tebbutt and particularly his daughter for looking after me so well.

Thank you for dropping by. Next time it'll be back to the natural world!
Posted by Richard Pegler at 19:08 22 comments: