The run-up to Christmas has been a bit of a difficult time in the Pegler household. Lindsay had a total knee replacement on December 9th. Things didn't go well with the operation - they managed, by mistake, to give her a left-sided femoral component in a right-side knee! She's not done too well since, and had a spell back in hospital on 18th and 19th with suspected DVT, spending nearly 24 hours on a hospital trolley as no bed was available. Fortunately it was found to be cellulitis rather than DVT and she's now home again and being treated for this. She is now able to move from reclining chair in our lounge into a hospital bed that was installed in the lounge yesterday (22nd December), and can also walk around a little with the aid of crutches or a frame.

You can probably understand that, during the past two weeks, I have been a bit pre-occupied with caring for Lindsay, looking after the household duties, and trying to create a semblance of Christmas ambience in the home. This has left me with very little energy (physical and mental) or time to respond to comments on Blogger or create a blog post. We've not even managed to send out any Christmas cards this year! Please, therefore, excuse my lack of responses to your comments. I have read them and do very much appreciate them, but cannot get into the right frame of mind to respond.

I hope that you will forgive me for using a recycled Christmas banner header for this blog. The greetings behind this, however, are fresh.

I hope this will regain an element of normality soon. In the meantime, please take good care of yourselves and Nature - and have a wonderful Christmas.

(header while this post is current :- view over Melbourne Pool)

Herewith, a short account of a few days in the second half of November. The weather was not so good during this period, but I did manage one short excursion.

On the other hand, Robin is a relatively constant visitor, and we currently have one male holding territory which seems to have found a mate. She will usually disappear over the depth of winter, but will reappear during the spring.
Sunday, 20th November                  Garden

An embarassing situation unfolded this day. I was sitting in my study when a dark shape passing overhead momentarily blotted out the daylight A Grey Heron had flown over and landed on the apex of the roof of the bungalow behind our back garden. The view from my study was partially obscured by the Sambucus on our boundary, so I grabbed the camera and rushed upstairs to our bedroom for a better view, calling to Lindsay as I did so as I knew she'd want to see the bird.

I was busy taking photos when Lindsay alerted me to the lady in the bungalow on whose roof the heron was perched. She was looking very concerned at me with my big lens, and pointedly pulled across the blinds to her window. I ended up going round to the bungalow to apologise for any concerns and took a photo of the heron to leave with them and assure them that I was not spying on them. I shall be more careful in future!

Another dull day, but we were visited by Grey Wagtail once more.

Without a shadow of doubt, at this time of year, the most numerous birds visiting our garden are the Goldfinches, the Starlings having departed to form into much larger groups elsewhere. With them being so common, it is easy to overlook just how spectacular these little birds are. OK, so this next image doesn't really do them justice, but you get the picture.
Wednesday, 23rd November            Garden ; Melbourne Pool ; Staunton Harold Reservoir

I was determined to go out this day, and settled on an afternoon visit to Melbourne Pool, in the south of Derbyshire. Although my home county is Leicestershire, Melbourne (with its attractive pool) is closer to my home than most of Leicestershire's avian hotspots.

I have recently installed a new bird feeder, close to the kitchen window, as Lindsay had been saying for a while that she'd like somewhere close to hand where she could put bird-friendly food scraps, rather than put them in the refuse bin. This has been a great success, primarily in attracting Magpies and is tending to take them away from the other garden feeders where they disturb the smaller birds. Here's one of the Magpies, just arriving in the Rowan, prior to coming down for its breakfast.

I set off for Melbourne after an early lunch. Sadly, soon after my arrival, the weather started falling short of the relatively bright forecast. Melbourne Pool is not a particularly 'birdy' place, but is a rather attractive one, and not very busy with people mid-week. Those people that are there seem to be dog owners and with a more responsible attitude to the handling of their dogs than is the norm in other 'doggy' places that I am familiar with. I was last here in February, when I had the pleasure of watching and photographing Red-crested Pochards.

Nothing was interesting enough to make me raise my camera until I had passed by the outlet weir and started out on the grass path round the pool. Here I found a drake Pochard (sadly, not Red-crested!).

There were plenty of Mallards around, including a few that showed signs of being domestic hybrids to varying degrees. This one looked as if it might be pure.
Close by were three immature Mute Swans, one of which was doing what swans do when looking for food. 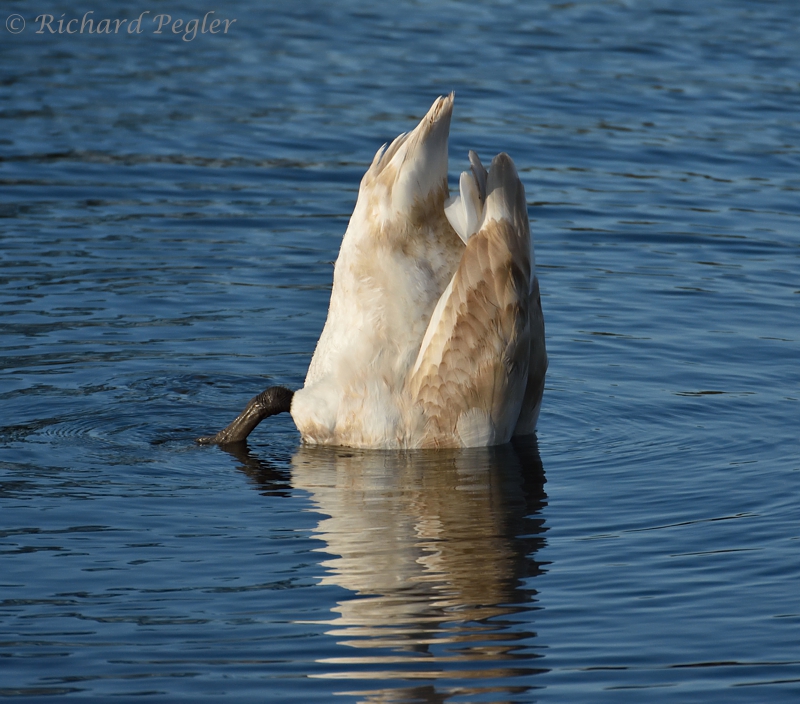 At the end of the grassed section, the path round the pool enters a wooded section. I was not prepared for the stream running down the path, caused by continual torrential rain in the preceeding days, and I got wet feet. I persevered, however, and was rewarded with sightings of a few distant Grey Heron and Cormorants. 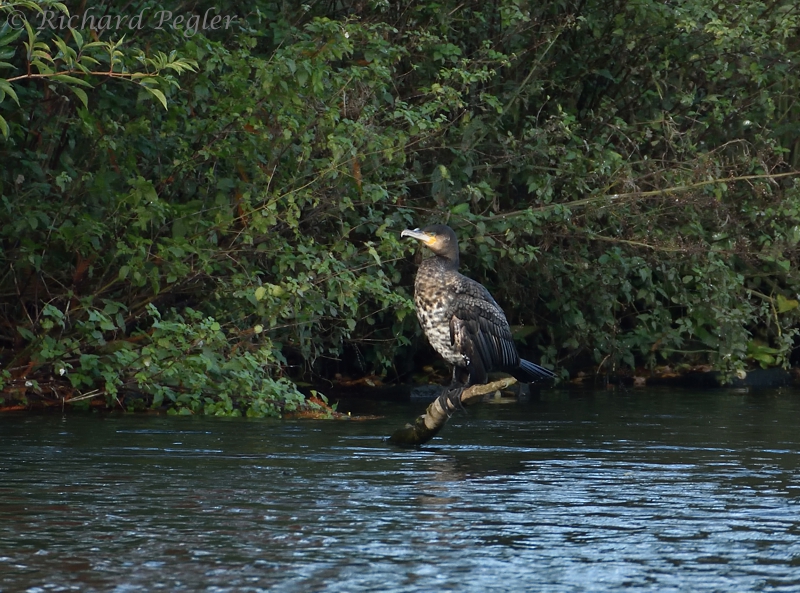 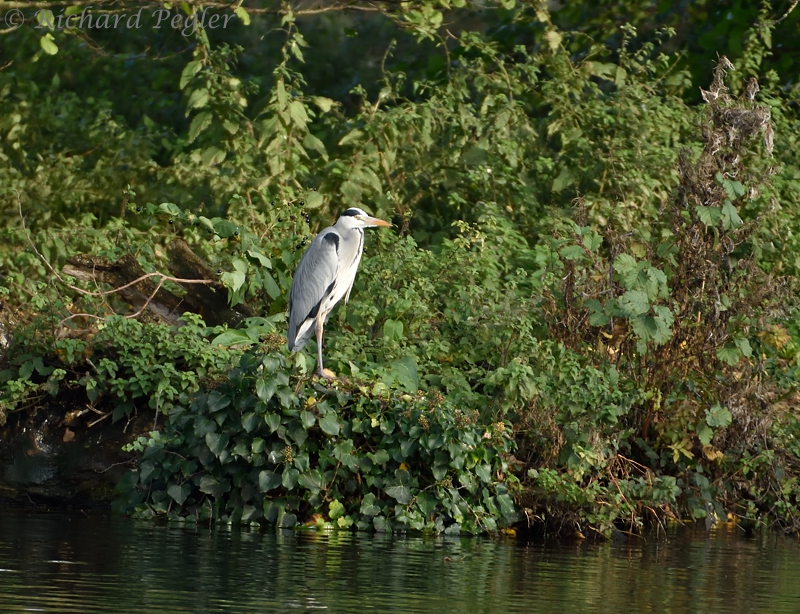 On my way back, along the grassy section, I took some shots of Tufted Duck. The light was getting a bit low by now and creating what I find to be quite attractive effects on the water. I sometimes find myself getting more excited by the water than the subject matter in the water!
From the edge of the private road that runs along the edge of the pool, between the pool and Melbourne Hall, I took a few more photos, including one of a very distant grebe that seemed to have already turned in for the night.
I had not visited Staunton Harold Reservoir since May this year, so decided to call in there briefly on my way home. I parked just outside the round car park, being unsure of my membership status with regard to the car park charges.
On reaching the reservoir, I was astounded at how low the water level was. I know that it would have been low because of the drought in the summer, but thought that, with all the rain we have had (it has been the wettest November on record in some areas of UK!) and the huge amount of water coming over the weir at the inflow, the water would be much higher. In the image, below, the water level would normally have been right up to the tree-line.
At the point from where I accessed the reservoir, I found three people admiring the scene. They asked what was on the log at the far side of the reservoir. It tiurned out that they were looking at Cormorants and a Grey Heron on a nesting platform (probably designed for terns to breed on).
These people told me that, a month ago, it had been possible to jump from one side of the reservoir to the other at this point on the inlet arm - that's across the water from the furthest spit of land on the right of the above image of the reservoir to a point on the left.
Out of curiosity, I decided to walk to the inlet on the dry reservoir bed and found my feet crunching on thousands of freshwater mussel shells.
It was now getting dark and time to go home. It had been an interesting afternoon out, although nothing unusual in the way of birds had been seen.
Footnote:  There is a very positive connection between Melbourne in Derbyshire, and Melbourne, Australia. Melbourne Hall in Melbourne, Derbyshire, was home to William Lamb, 2nd Viscount Melbourne, British Prime Minister from 1834 to 1841. Melbourne, Australia was founded in 1835 and incorported and named (after the then Prime Minister) as a Crown settlement in 1837.
Lindsay and I are headed into uncharted seas later this week as Lindsay goes into hospital to have a total knee replacement. If all goes according to plan she will only be in hospital for the day (amazing, isn't it!), but is going to be heavily dependent on me for weeks - maybe months - so I am going to be busy. I'm going to try and get another blog post prepared before this event, but I suspect that I may be a little short of time to keep up with Blogger, so please excuse me if I am tardy in visiting your blogs or replying to comments.
In the meantime, please take good care of yourselves and Nature. Thank you for your visit - - - Richard