When I first started birdwatching, and thumbed my way through my first bird guide, one bird that I was really taken with was the male Bluethroat - it was, in my opinion, the most beautiful of the European thrushes. I really had a hankering to see one, to the extent that I contemplated a visit to a business associate in Douai, France, who regularly had them just over the road from his home. This visit never happened, and I resigned myself to the occasional look at the bird in the Collins Bird Guide.

On 10th February, a first winter male Bluethroat was reported at Willow Tree Fen, Lincolnshire. I was a bit incapacitated at the time and didn't even check where Willow Tree Fen was, assuming it was somewhere near the coast, and a bit far away from me.

When it was still reported as being there on 19th February, I was tempted to investigate where Willow Tree Fen was, and found that it was only about a 70 mile (110 km) road journey from my home. I'm not usually a twitcher, but this bird had a corner in my heart, and as the weather forecast for the following day was quite reasonable, I made up my mind to go.

So, sorry if this is just another Bluethroat blog. If you've seen too many Bluethroat images lately, now's the time to switch off. 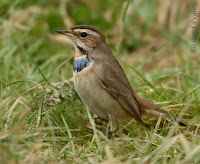 I set off at around 09h30 as I had an arrangement to call in at my favourite cider maker's  place, but this only meant a total diversion of around 20 miles (30 km) and this resulted in me arriving at the entrance to Willow Tree Fen a couple of minutes before mid-day. There were quite a few cars around when I arrived, and I could see the line of observers straddling the track from the road side.

As I set off on the track, a vehicle and trailer came in the opposite direction. The farmer was moving his sheep. Fortunately, although this happened three times each way whilst I was on site, it didn't seem to result in any significant problems.

I soon joined the line-up, which consisted of just 18 people who were impressively ordered and quiet. Here's one taken as I approached.

I was soon filled in as to what was happening and stood patiently waiting. At 12h41 the bird emerged from the track-side reeds. WOW!!! Here's an image from that first appearance.

I fired off many frames during that first showing, which lasted around two minutes, but I felt that I could probably do better, so hung around. A gap in the line appeared in a more favourable position - so I filled it.

I only had to wait until 13h15 for the bird to appear again. The light levels had dropped somewhat in the interim, but I subsequently found that staying was the right decision as, in choosing which images to post on this blog, all but that first one were from the second session, which also lasted around two minutes. 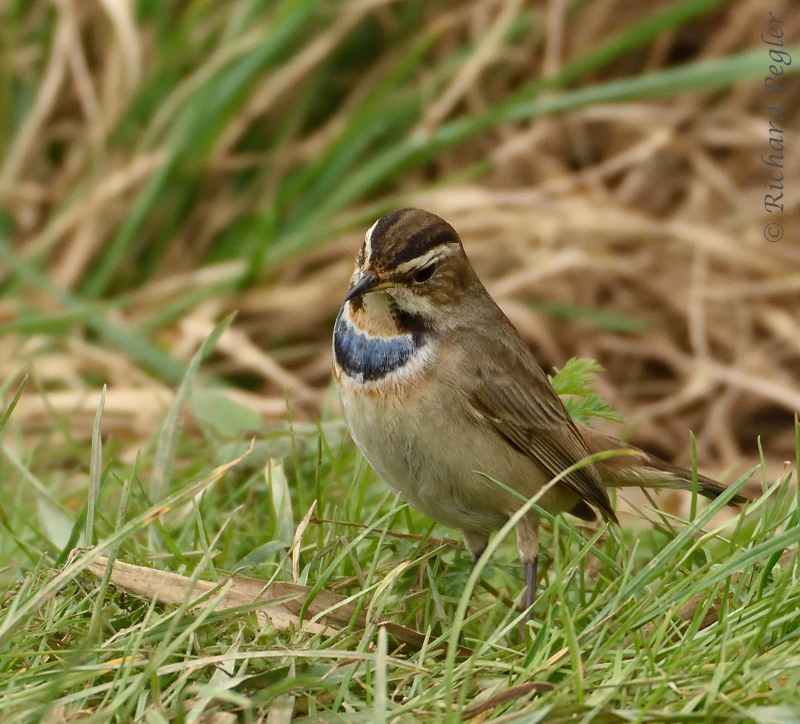 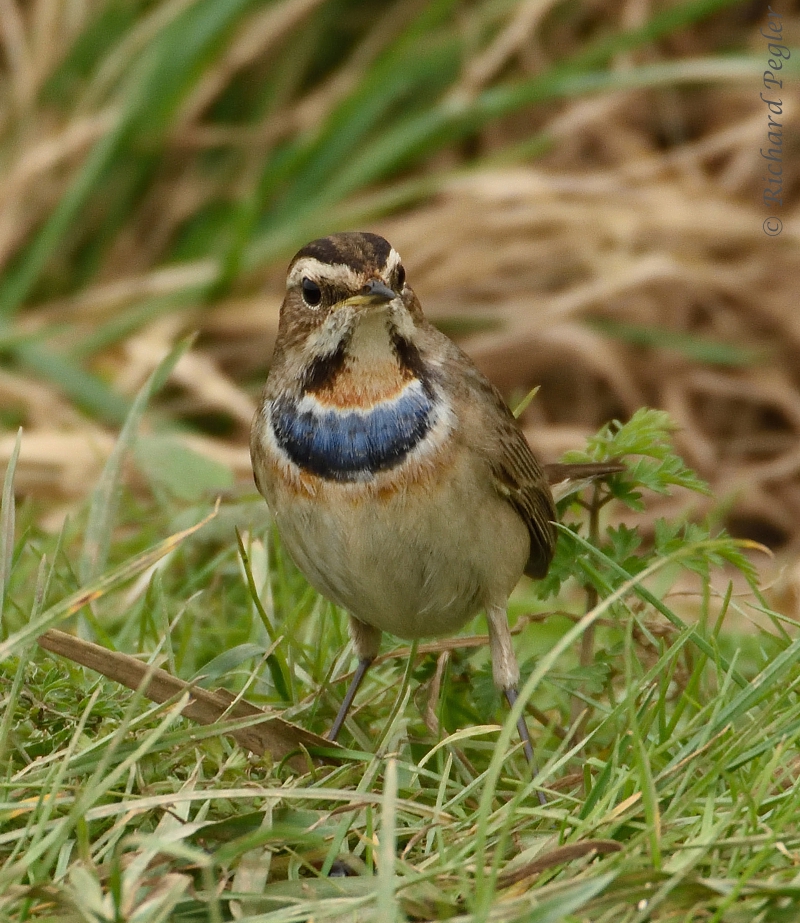 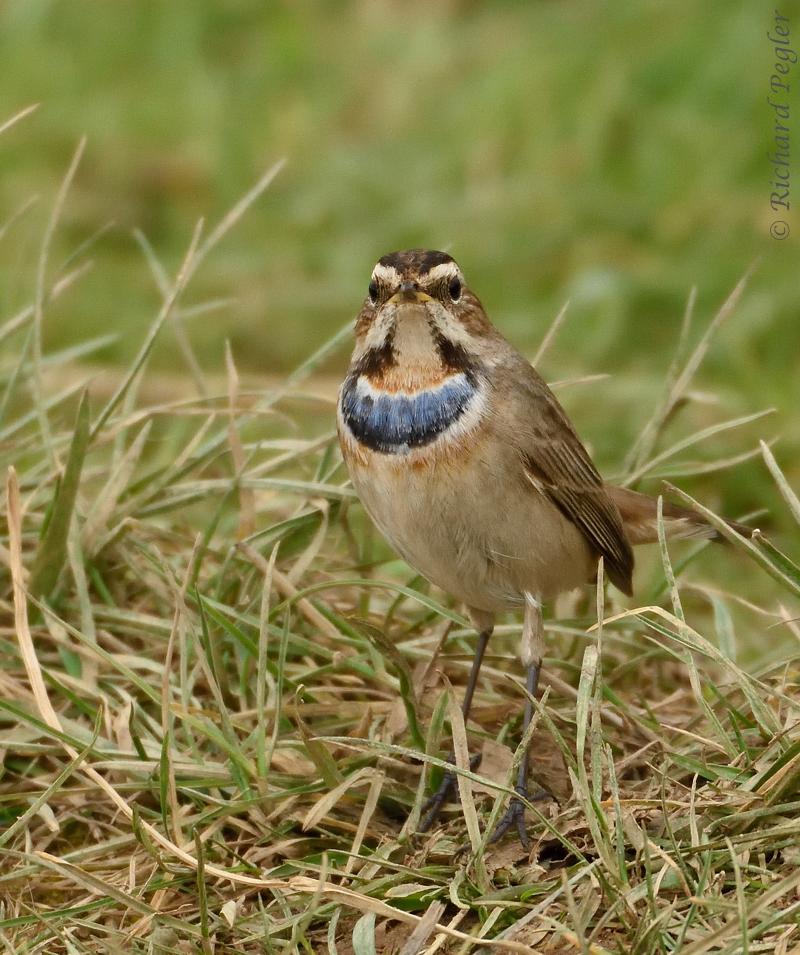 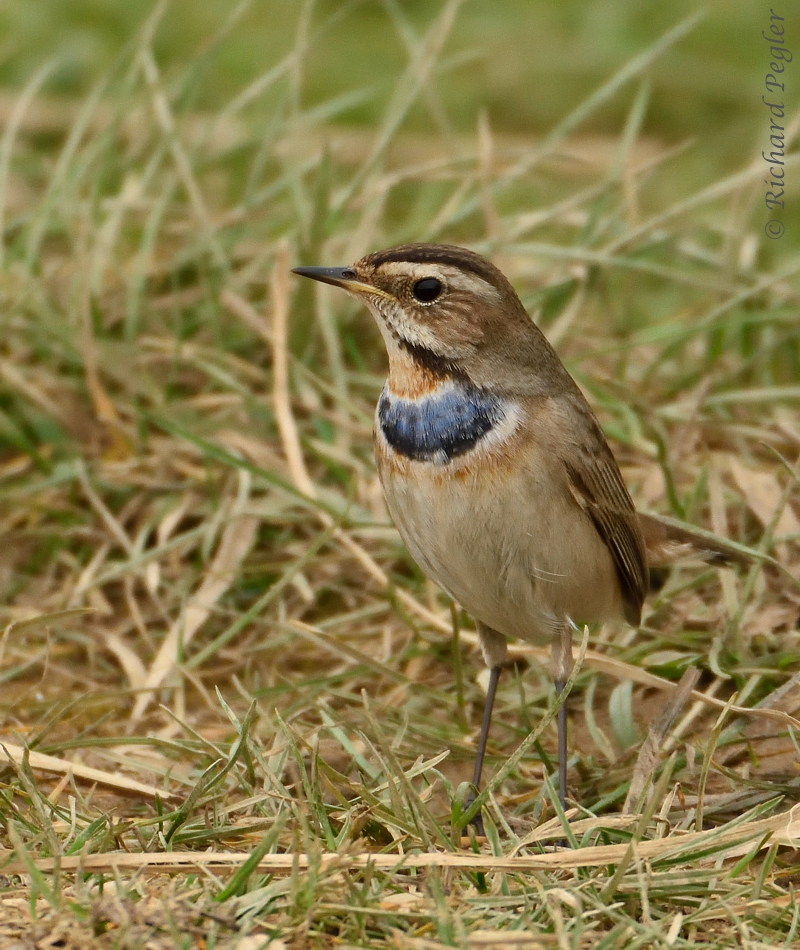 This next image shows just how unobtrusive the bird appears from the rear. I think that most people would be hard-pressed to even suggest what the bird might be from this angle!

To my mind, the bird looked as if it was short of a few tail feathers. In this next image you can see some of the rusty-red feathering at the base of the tail.

And here's a final image.

Did the bird live up to my expectations? No, it exceeded them by miles!! I think that this state of plumage is even more attractive than the plumage of a mature male of the species. I suspect that this will turn out to be my 'Bird of The Year'.

Thank you for dropping by. Maybe next time it WILL be those garden birds!
Posted by Richard Pegler at 09:26 24 comments:

Email ThisBlogThis!Share to TwitterShare to FacebookShare to Pinterest
Labels: Bluethroat

No, that's not a typo in the header. I'd not been out with John for our 'regular' Thursday afternoon for three weeks - partly due to the weather and partly due to severe toothache followed by an extraction. We'd pretty-much decided, therefore, that we'd go out on this Thursday (16th Feb.) no matter what the weather. We were relieved to find, the day before, that the forecast was not too bad.

On my way to pick up John (it was my turn to drive) I stopped at my Little Owl Site No.02. I've been seeing a pair here regularly of late, and I saw both on this occasion, although one bird only showed for a second or two. The sun was shining and I managed some shots of the male bird. 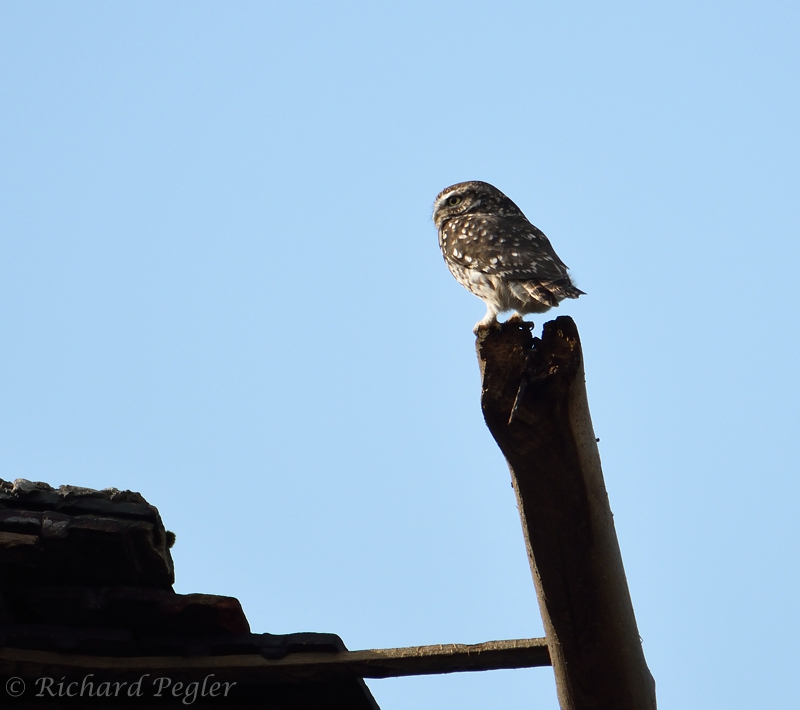 The skies clouded over soon after leaving John's place and by the time we found our first owl, at Site No.37, it was fairly dull. This was no bad thing as the views at this site are 'into the sun'. 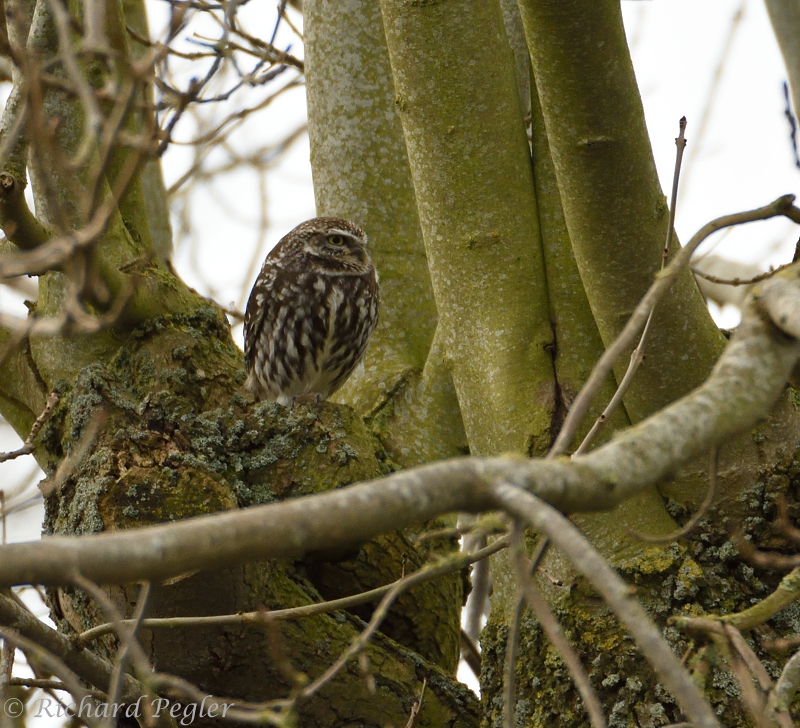 We stopped for our picnic lunch by my LO Site No.34, and one owl was seen, but I did not attempt any photography.

We then continued to Eyebrook Reservoir in the hope of getting some Kingfisher images. The water at the inflow was extremely muddy and we only had one glimpse of a Kingfisher (no photos) as it flashed down the inflow to the reservoir.

After a while here we gave up and headed round to the hide on the western side of the reservoir. There were plenty of birds out on the water, but all at a great distance. Not wanting to come away totally empty-handed, I took a few shots of a drake Goldeneye which was spending three times longer under water than it was on the surface. 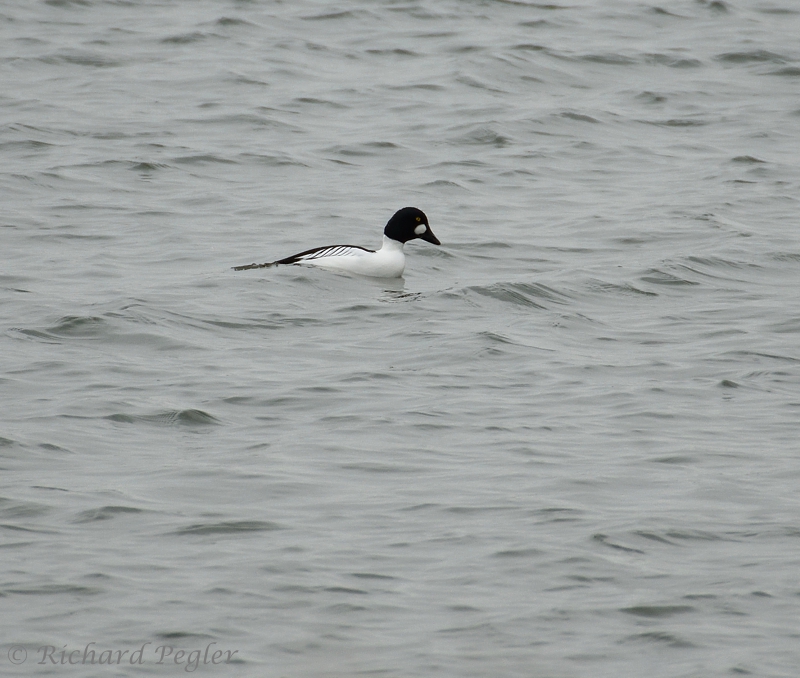 The light was failing rapidly and so we decided that it was time to head for home. As we left the hide we felt the first drops of rain. We were back in the car, and I was just about to pull away, when a Robin alighted on the hedge just in front of us. Never one to resist an obliging bird, I fired off a few frames.

It soon started to rain quite heavily and, as John wanted to be home by 17h00 we skipped a few of our normal stops, and only saw those owls seen on the outward journey.

I dropped John at his home at around 16.45 and, as Lindsay wasn't expecting me home until between 18h30 and 19h00, I called again at my LO Site No.02 and sat in my car and waited. I'd seen the Little Owls mating here on my previous two evening visits. The first owl (the female) showed at 17h00. This bird is quite distinctive in its appearance as it has a flattish head and bushy 'eyebrows'.

The light was already failing quickly, but I was thankful that it was not sunny as the light would have been directly behind the bird, making matters even more difficult. She stayed in this spot for a few minutes before flying up to the top of the end wall. 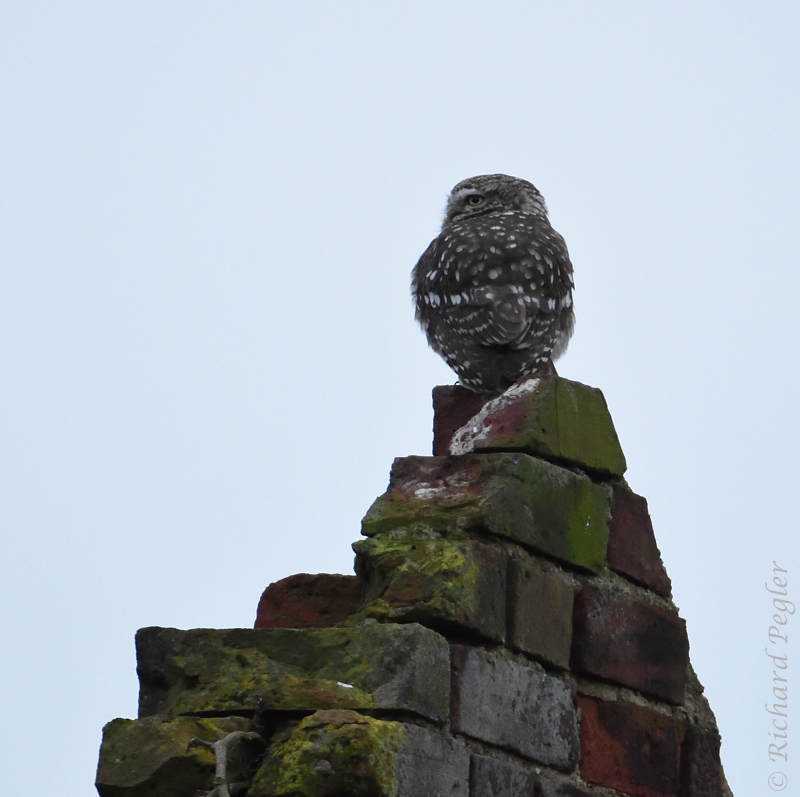 It was nearly ten minutes later when I  heard an owl calling followed by the male bird appearing in the remains of the building. It was somewhat darker already.

Almost immediately he flew to the end wall, which had been vacated by the female.

The female then arrived at a point below the male.

She was holding her wings low to indicate that she was ready.

This didn't seem to work, so she flew up to join the male.

They then mated, but my images were rubbish. There was rather a lot of noisy flying around after this and, eventually, the female returned to her previous perch and started calling again. She was joined by the male, and mating took place once more. By now it was quite dark, so please excuse the lack of quality in this last image taken at 500mm, ISO 2500, 1/8th second - handheld!

They flew off again after this episode. I stayed for a little longer, but realised that, even if the owls had returned, I wouldn't have been able to see them - so I set off home.

It wasn't the afternoon I'd hoped it might be, but it was, nevertheless, most enjoyable.

Thank you for dropping by. I suspect that my next post might be on garden birds - unless something interesting happens in the interim!
Posted by Richard Pegler at 10:22 26 comments: