I've not posted on this blog for a while - that's because I've been away on a 10-day holiday in Speyside, Scotland. It'll take me a while to process the couple of thousand or so images that I took whilst away, so here is a post relating to something I didn't have time to do anything with before I went away.

My friend with the Barn Owls has, on a couple of occasions, seen Little Owl in his garden. We've had attempts to discover where they might have come from, but had no luck. Then we had a tip-off from Rhys as to where they were (thank you Rhys!). We hadn't reckoned on finding owls in the roof of an occupied house! One adult bird was spotted on the morning of 14th June, but by the time we'd found somewhere to park, and walked back, it had vanished.

My friend - I can't keep calling him that so, for security reasons, from now on I'll refer to him as Titus White - went back to the location and found an adult owl feeding two juveniles. Up until this point, only a single adult bird had been seen.

I'd made up my mind to go back on the evening of Saturday 16th, but it threw it down with rain, and was quite windy. However, later, the rain started to ease, and as I knew it would be my last opportunity before I went away, I decided to chance it. It was still raining and windy when I arrived, so I abandonned all throughts of setting up my hide, but managed to park at a point roughly twice the distance away as I would have ben if I'd been in my hide.

Amazingly, in spite of the weather, a Little Owl appeared with a worm, and took it into the roof of the house.

It was not long before the adult bird re-emerged and flew off. A short while later, a juvenile also emerged and spent time wandering around the corner of the roof, peering round in a very alert fashion.

After a while this juvenile popped back into the roof space and a second juvenile emerged. However, the light went through a particularly dull patch whilst this juvenile was out.

After the second juvenile had ducked back in a second adult bird appeared with another worm - quite a large one!

This owl took the worm into the roof and then re-emerged shortly after. It was soon joined by a juvenile.

Whilst this was happening on the roof, the first adult was in a nearby tree. It seemed that this bird was trying to encourage the juveniles to be a bit more adventurous. The second adult soon departed, leaving the first encouraging the juveniles. 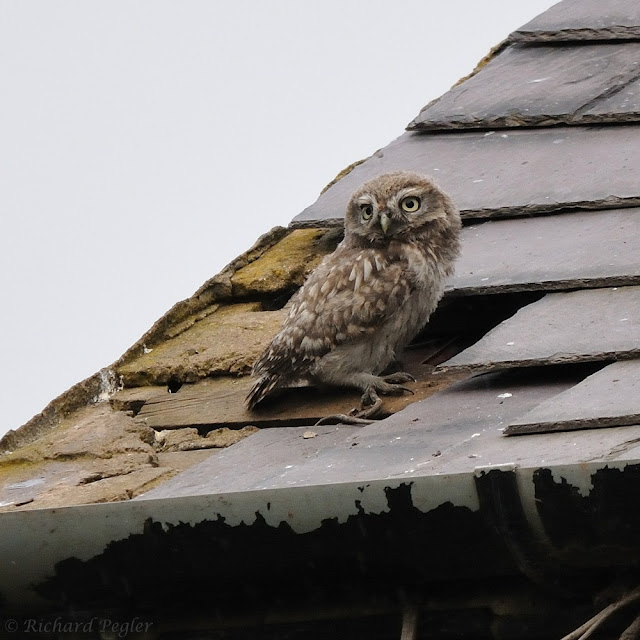 Wow!! one of the juveniles took the 'leap of faith' off the roof and ended up out of sight in the front garden of the house!

In the space of an hour I saw more worms delivered and two more of the four chicks leave the roof. I don't know if it was their first leap into the unknown - I suspect that it was. However, they will almost certainly have had plenty of room for flight practice in the roof space. Only the smallest of the brood ducked back into the roof and didn't brave a flight.

Here are some more images from what turned out to be one of my most magical Little Owl watching sessions ever. 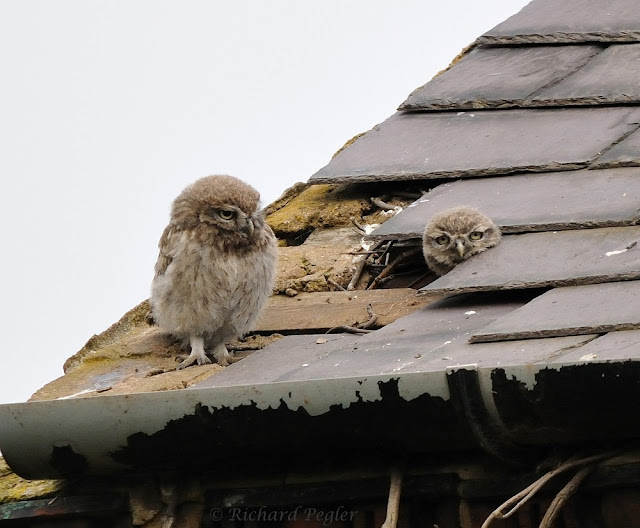 My concern now is if/when the houseowner will want to repair his roof. This could be a rather short-lived site to monitor!
Posted by Richard Pegler at 20:50 8 comments:

Last night the Barn Owl ringing in the garden of my local friends went ahead like a well-oiled machine. I arrived half an hour before the scheduled start to help set up the scaffolding tower that later would be wheeled over to the nest box containing the chicks. This was duly done under the supervision of the ringing team, on their arrival.

There had been concern that only three chicks out of four had been visible on camera since Friday. Sadly the ringers confirmed that this was the case. There was absolutely no trace of the fourth chick. However, there were three rather large chicks, with primary flight feathers developing nicely.

There was, naturally of course, speculation as to what had happened to the fourth chick, as there had been no 'runt in the litter', and cannibalism was ruled out as food was in plentiful supply. Because the chicks had started to appear in the doorway of the nest box at around the time of the disappearance, the theory that was given most credence was that the Peregrine that my friends had seen in the garden at around that time might have taken the chick from the doorway.

For security reasons, I'm not showing any images of the impressive set up, or of the persons involved, but here are a few images that I took yesterday.

And finally my favourite image of the evening!

My local friends' Barn Owls are continuing to successfully raise their brood of four chicks. A week or so ago the female, who up until then had resolutely stayed in the smaller of the nest boxes with the chicks, started to emerge and spend time with the male bird in the nearby larger box.

I went last Monday (4th June) and set up my camera in my hide. Whilst I was in the kitchen talking to my friends before settling in my hide, the female bird emerged (at approximately 20:00) and popped next door to be with the male. Damn! - I missed recording my first sighting of this bird with the naked eye (always been seen on the nest cam before). I quickly went to my hide and sat waiting. Frustration set in as the sun came out shining brightly on the boxes with no birds in sight. By the time that the first bird emerged, closely followed by the second at 20:51, the sun was already off the boxes and the rest of the garden.

For a short while, both birds were out together on the veranda of the more distant box. Then they both departed. 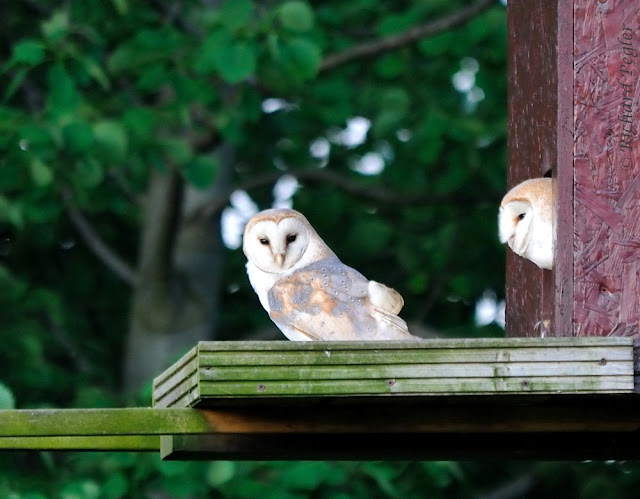 One of the birds returned at 21:04, bringing a decent-sized rodent which it immediately took into the box with the chicks. Over a period of 34 minutes, the pair of them delivered  five good-sized rodents to the chicks. These youngsters were certainly not going to go hungry! 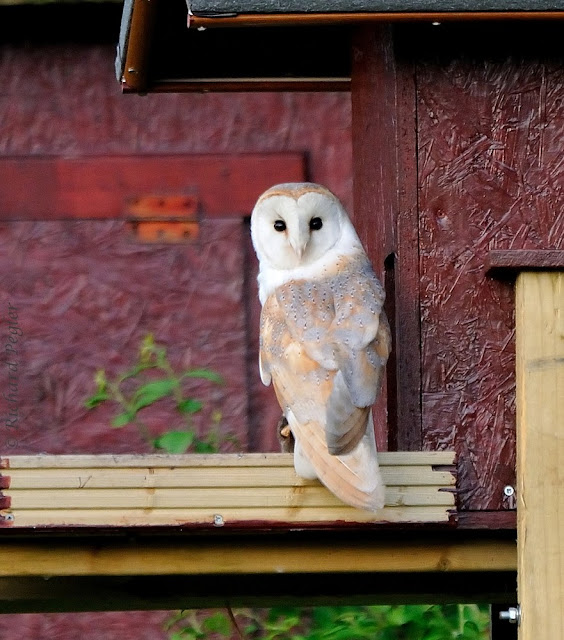 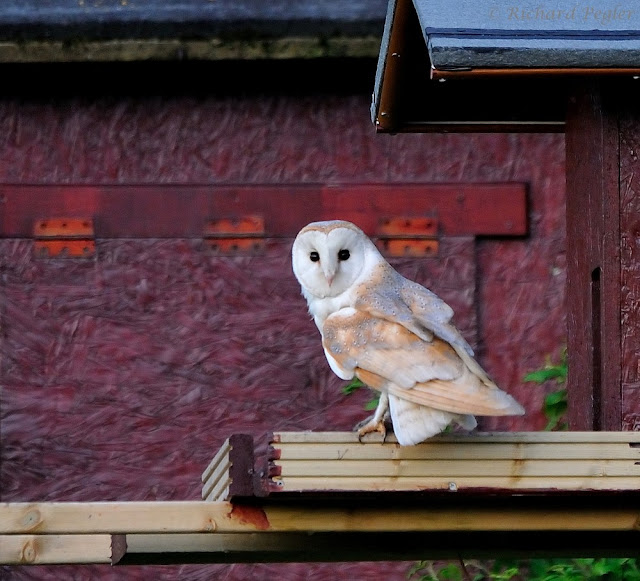 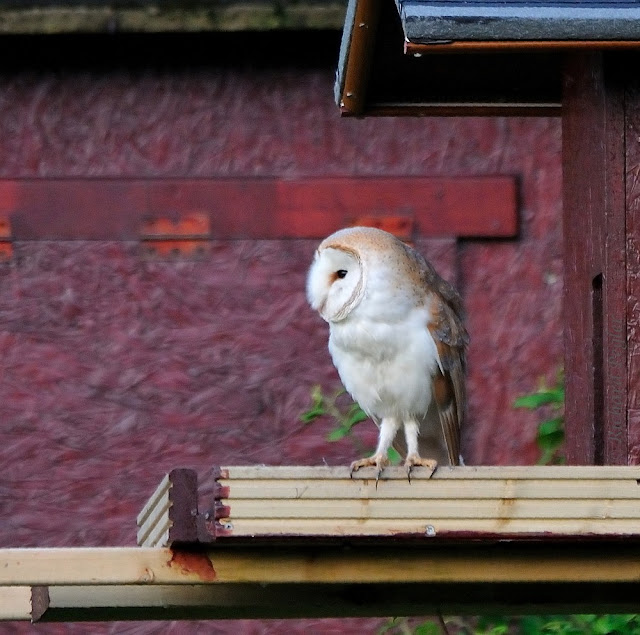 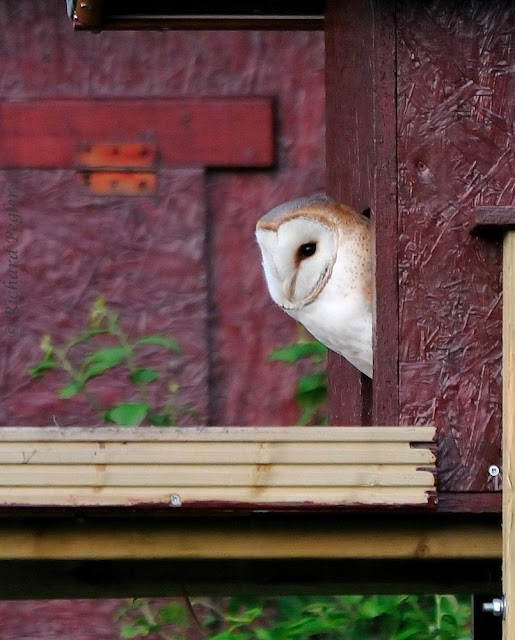 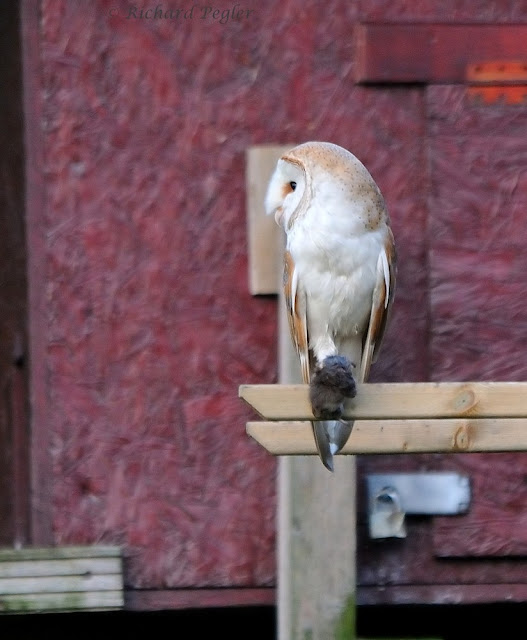 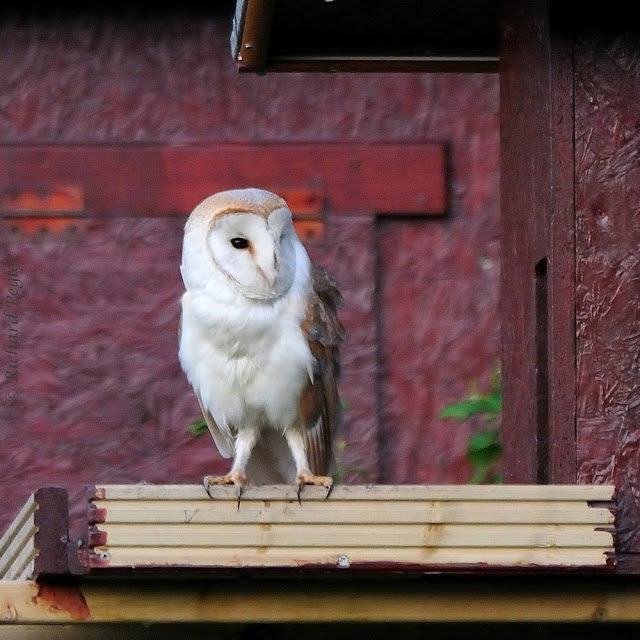 As the light had completely gone and further attempts at photography were pointless, as soon as both birds were away, I packed up and retired to the kitchen. When I left, at about 22.20, both birds were still hunting and bringing back food. It has to be assumed that the chicks are now well capable of feeding themselves from the food that their parents deliver.

On Friday I had a message to say that one of the chicks had ventured to poke its head out of the box. I suspect that it's only a short time before I'll be seeing juveniles when I visit.

As of last night, there was little change, except that one of the four juveniles was not visible via the camera, which only has limited coverage of the inside of the box. We're keeping our fingers crossed that it was hiding out of camera range.

I've been invited for the ringing of the chicks, due to take place on Thursday, having been postponed from Tuesday, so maybe a further update after this.
Posted by Richard Pegler at 11:30 8 comments:

It's not a 'garden first' for us, but it is the first time that we've seen a Willow Tit in our garden since I started keeping an annual garden list at the beginning of 2009.  It was pretty evil weather yesterday afternoon so the images, taken at some distance, are pretty rubbish, but it needed recording! 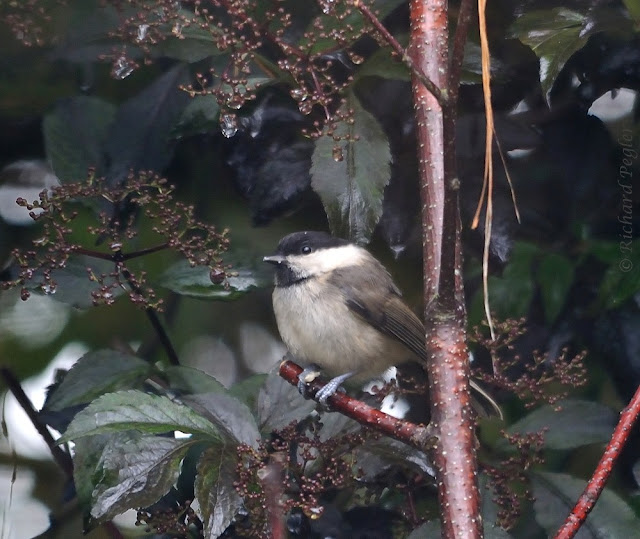 Things are getting more interesting in our garden this week. As I write this, a Great Spotted Woodpecker is feeding on the peanuts - we usually only get one sighting a year of these, and that's if we're lucky!

The male Bullfinch is now visiting us several times a day and, presumably, feeding young nearby. He tends to come when the weather is dull, so no more images so far. Hopefully he will bring his young to see us when they have fledged.

Talking of young, the garden is full of juvenile birds these days. The most numerous are the Starlings, closely followed by the Goldfinches. We also have young Blue Tits, Great Tits, Blackbirds, Dunnocks, and House Sparrows visiting regularly.
Posted by Richard Pegler at 10:28 8 comments: