On Sunday 8th September, Willow Emerald Damselfly was reported from a site in Leicestershire and Rutland (VC66). This was a first record for the vice-county. This damselfly is rapidly expanding its range in UK, but I'd had my first-ever sighting of this species in Norfolk at the beginning of July.

Undaunted by the ill omens that are supposed to surround a 'Friday 13th' date, I decided that I needed to go and 'twitch' this species, which was at a location on the far side of the county to my home.

I set off mid-morning, taking a rural route. Nothing of great interest was seen on the way, but I did stop en-route for a while to look at a small group of Barn Swallow, which included many juveniles, on some wires near one of my old Little Owl sites.

The location I was headed for was the inflow at Eyebrook Reservoir. I was expecting to find a crowd there, but arrived at 11h45 to find just one other vehicle and three people in attendance. All three had been looking for the Willow Emeralds, but had not yet seen one, although they'd seen scars on distant branches through the 'scope that one of them was using. I was told that they'd looked both sides of the bridge, but only spotted evidence on the north side, so this is where they had concentrated their efforts.

After a while, three more people turned up, including a lady who had previously seen the Willow Emeralds, and who informed us that the south side was where they'd been seen. Our attention was, therefore, switched to the other side of the road.

It was not long before the first specimen (a male) was spotted although it spent its time trying to hide behind a distant twig (this is depicted in my header image, whilst this post is current).

After a while, I felt the need to sit down in my car and have my picnic lunch, during which time people's attention switched to the north side of the bridge. A Willow Emerald had been spotted there, although even more distant than the one on the south side.

Soon after this, sightings on the south side started to increase, with mating pairs and pairs in tandem ovipositing, as well as singles. Although I didn't see more than four at any one time, I'm sure that there were many more than this, and believe that the evidence shows a well-established breeding colony. 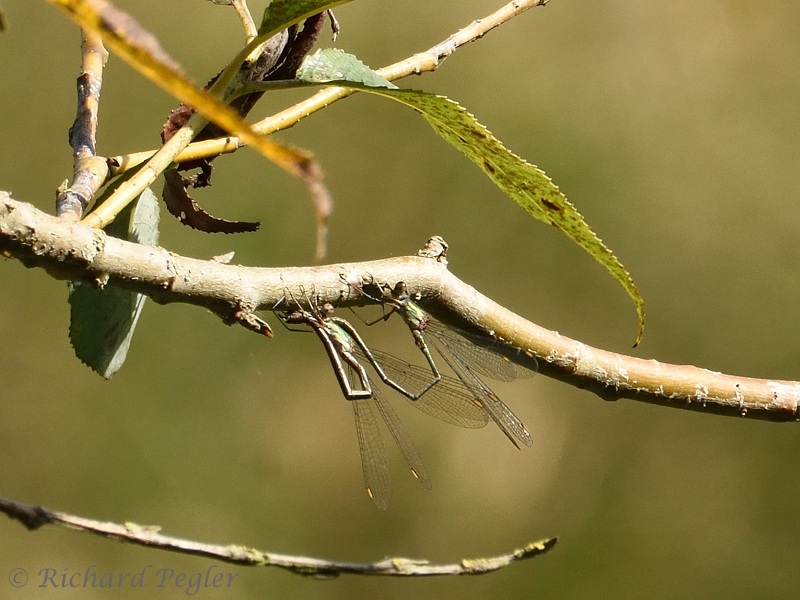 By 13h45 I was feeling decidedly off-colour (I'd nearly turned back on my way to Eyebrook) and, in spite of the sun steadily moving round to a more favourable position, bringing the damselflies with it and getting closer, I felt the need to depart homeward.

A short way down the road, just the other side of Stockerston, I stopped near a pond to answer the call of nature (part of the reason for my need to depart from Eyebrook!). A quick look at the pond yielded Brown and Migrant Hawkers and, on the path to the pond, Ruddy and Common Darters. I only managed a passable shot of a Common Darter.

My route home took me past Launde Abbey, and there is a pond right beside the road and grass to park on next to it so I stopped there. Last year, in the very dry summer, the pond had dried up completely and the mud on the bottom had a mass of wide cracks in it, so I feared for the dragonflies and damselflies there. A visit a few weeks previously this year had salved my worries as I saw plenty of odonata action. The pond vegetation, however, was far higher and more dense than I have ever seen before and there was barely any surface water visible. I did see a Migrant Hawker flying around the far side of the pond and a female Southern Hawker briefly came into view, ovipositing, but I failed to get any shots. I did manage to get a few shots of Ruddy and Common Darter, but I didn't stay long.

The excitement for the day was not over yet as I found a Little Owl out at my LO Site No.23

As a measure as to how desperate the situation has been this year, this was the first Little Owl I had recorded since the end of March! I am sure that you can, therefore, understand how exciting this was for me.

Thank you for dropping by. I might have to resort to older material for my next blog post, unless something turns up in the interim!