The past two weeks have been somewhat lacking in observations, partly due to weather, but mainly due to preoccupation with other matters - particularly in the last week - and the frustration is not over yet, although we might be getting somewhere. We did, however, end the period with some excitement!

The trail cams showed we had a visit by the Fox in the early hours of the morning. This was the last time we saw evidence of a visit by the Fox, possibly because I have taken steps to prevent too much sunflower heart spillage from the bird feeders, which the Fox was 'hoovering up'. The Hedgehogs were favouring them too, and a diet of sunflower hearts is detrimental to the health of Hedgehogs - and Foxes also?
Tuesday, 14th July

This day's highlight was the arrival of 8 Long-tailed Tits that noisily and busily hung around for a few minutes, but were not photographed.

The trail cams showed that, in the early hours of the morning, two Hedgehogs had had a brief encounter. In the last part of this video clip you can see one hog passing the other that it has pushed off the low wall and is curled up at the base of the wall - it later departed unharmed. The sound from this particular trail cam is poor, but you will probably hear typical hog noises if you turn the sound up.

That evening, a trail cam caught a hog out unusually early, in daylight.
When the two hogs met up later that evening, their approach seemed cautious but less antagonistic.
Thursday, 16th July

I was doing some fairly heavy pruning of the ivy at the front of the house, when I found an Old Lady hiding in it. The Old Lady is one of our larger moths, and has a rather subtle beauty. They are said to not be attracted to light, but we do seem to get them quite frequently in the moth trap!

That afternoon we had a Red Admiral butterfly in our garden which, I believe, was our first of this summer. Sadly, I was on the phone when it visited!

I managed to have a little time in the garden with the camera this day as we had a return visit by a male Large Red Damselfly, now named 'Big Red'! 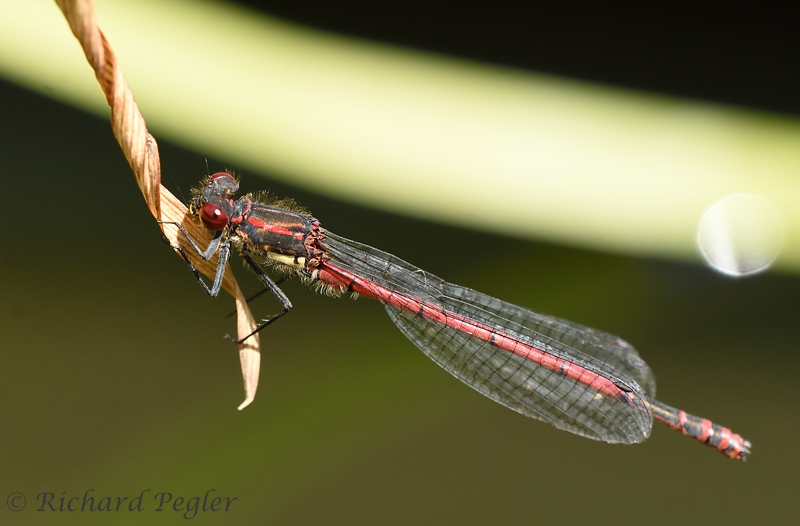 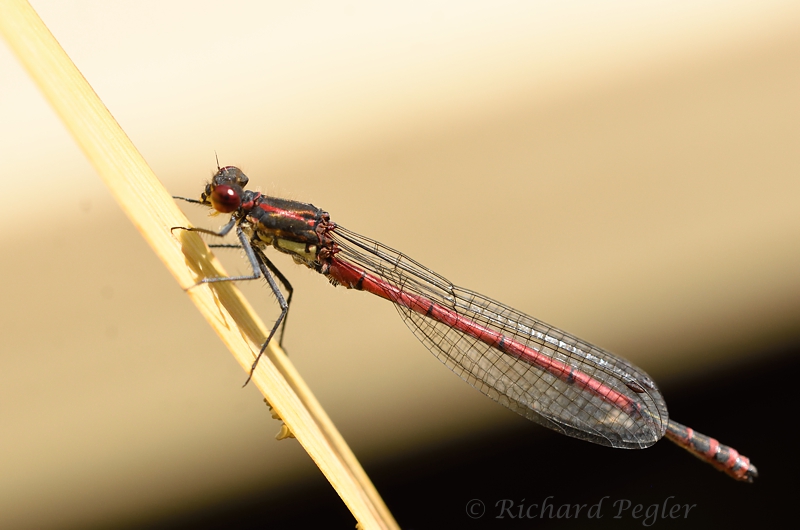 As on the occasion of his previous visit, Freddy the hoverfly was there to greet him! 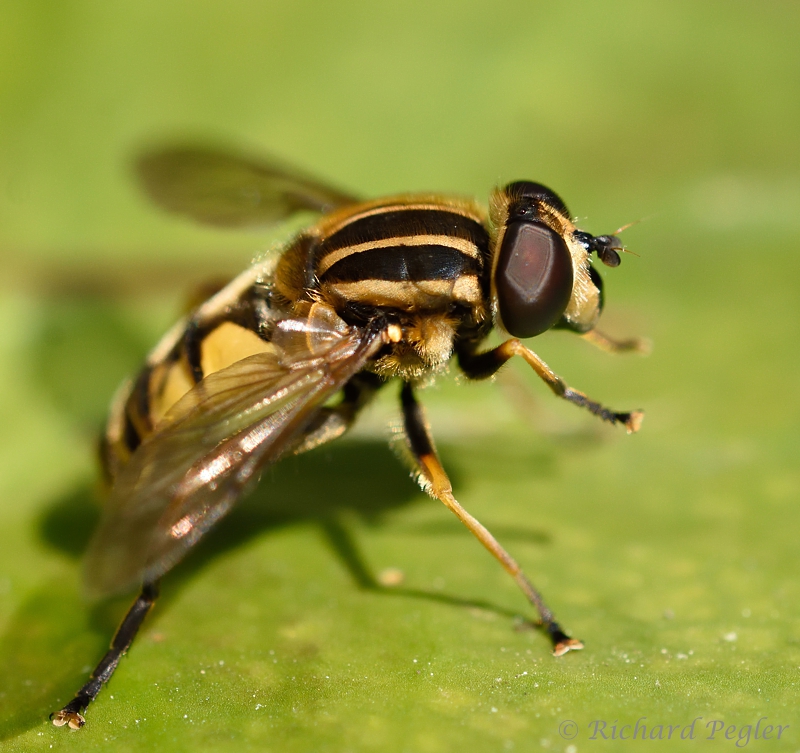 You may find yourself returning to the above two images when you see something that will appear later in this post!

I have mentioned in previous posts that, although we frequently see Carrion Crow from the house, it is comparatively rarely that one visits the garden. This was one of those rare occasions.

In summary (weekly maxima in brackets):-

In spite of Lindsay having a 'tombola number' birthday this day, I did mange a few photos.

Gatekeeper butterfly is not a usual visitor to our garden, so I was pleased to see one this day. They seem to be having an extremely good year this year. 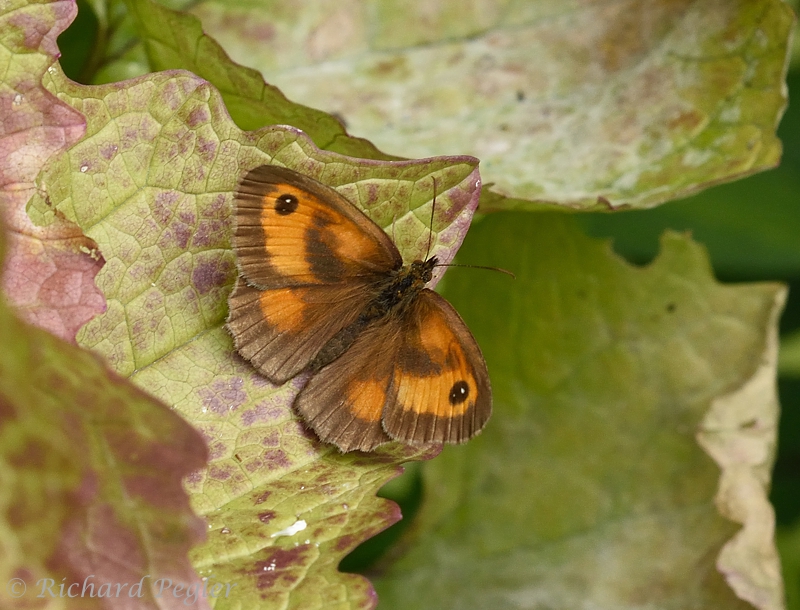 A few weeks ago, an on-line friend, Pete Woodruff (see 'Birds2blog' on my sidebar) published a photo of a strange swimming 'blob' that he'd seen in his garden pond, asking if anyone knew what it was. This day, I found something similar in my pond. I didn't see a reply he'd got with an ID, so contacted Pete to ask if he'd found out what it was. Pete kindly responded to say that it was something usually referred to as a Rat-tailed Maggot, and that it was the larva of a hoverfly species. So out came the book and, sure enough, it seems that this was the larva of  Helophilus pendulus - in other words, 'son of Freddy' shown above! Who'd have thought that something like this, shown below, could turn into something as smart as the hoverfly shown earlier. 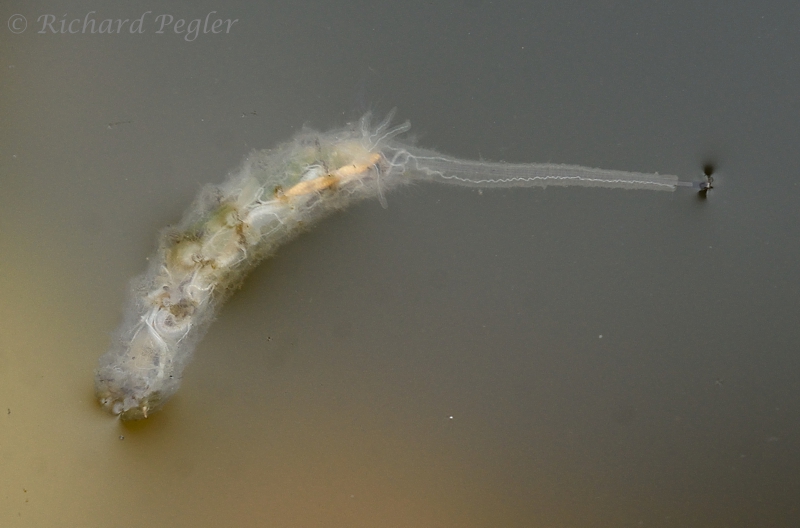 In the morning, I found a Willow Beauty moth (large, and very common in our garden) on the wall.

The Carrion Crow paid us yet another visit and stayed preening in the back of our Black Elder for almost two hours! It never positioned itself in a photographable position, however.

We had Gatekeeper butterfly yet again, but I only photographed a Peacock.

The garden trail cams showed that we had a late-lingering Hedghog in the garden that was up well past its bed-time.
That afternoon, whilst discussing work we needed doing with a tree surgeon in our garden, I had the frustration of seeing a female Southern Hawker dragonfly that seemed to be disturbed by our presence, and a Holly Blue butterfly which settled on the Ivy.  I wonder if the dragonfly might have visited our pond, had we not been there?

Whilst out in the garden early in the morning, topping up the bird feeders and collecting the trail cams, I heard a distinctive sound which instantly said distant Green Woodpecker to me. However, it was not the customary yaffle of the Green Woodpecker, but a a single note every few seconds, and with the same pitch as the usual yaffle. I was unsure, but just in case (knowing how nervous Green Woodpeckers are) I hastened back into the house, and started keeping an eye open from my study window. A few minutes later, what should fly into the Black Elder at the bottom of the garden, but a Green Woodpecker. This is only the second time I have seen this species in our garden, the last time being in December 2016. This latest one was a juvenile, and not being able to see the colour of the moustache in my photos, I can't tell what sex it was. Sadly, I only got record shots at that distance and with all the intervening branches - the light was difficult too!

Later in the day we had two second-brood Holly Blue butterflies visit, and I managed some shots of one - a female (as shown by the rarely-seen dark wingtips, the wings usually being held closed) - on the ivy.

It had been a splendid end to the week.

In summary (weekly maxima in brackets):-

This ends my report on two weeks that were a bit hin, but had their highlights. I believe my next report will feature a visit to a local site without public access in order to check on the odonata situation. This was the onlt time that I managed to get out in the past two weeks! I'm hoping things will improve.

In the meantime, stay safe. Thank you for dropping by.