Exciting Times and Other Observations - 24th August to 6th September, 2020

I reverted back to the old Blogger user interface in the hope that they'd sort out some of the problems in the interim. Some of them seem to be sorted, but I still have issues with the inability to present images at a specific size

This blog post covers just one long trip out with many photos taken, and an update on my garden observations with some exciting days but few photos taken.

This day was remarkable for me in that I managed a count of at least 35 House Sparrows in the garden - which probably explains why we also had a brief visit from a male Sparrowhawk. It was also good to see a Willow Warbler visit that day too.

I happened to look out of my study window at dusk, and spotted a bat flying around the garden. It seemed to be contained by an invisible force-field at the garden boundaries. Since then, I have made a point of looking out at dusk and it seems that this bat is a daily visitor. I'm wondering what species it is and where it roosts at night during the day.

There was real excitement when I checked the garden trail cams as we were visited by an extremely small Hedgehog. This is the first time ever, after many years with Hedgehogs, that we've had the pleasure of seeing a'baby' Hedgehog. I'll save the video for the following night's sighting.

The video of the young hog on this day showed that it was fending well for itself and was adept at finding its own food, even to the extent that it knew to roll its prey to clean it before eating it. I subsequently had my suspicions confirmed that we had two young hogs visiting, and both are growing very quickly - as they need to if they are to survive the winter. At the end of the clip, I show one of the larger of our other visiting hogs, just to give you a size comparison.

We had further excitement when a female Blackcap visited the garden briefly during breakfast in the conservatory. Sadly, my camera was not to hand. By the time 4 Long-tailed Tits arrived with 3 Blue Tits and a Great Tit I did have my camera with me and managed a couple of shots of one of them. I missed getting a shot of the Willow Warbler that they brought with them, however. 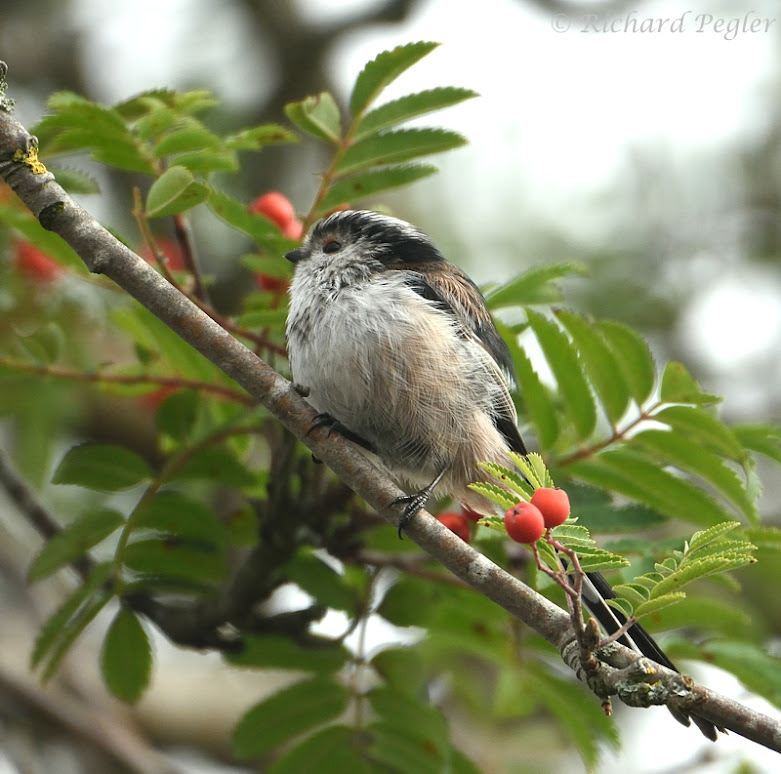 For the past few years we have let some of the sunflower hearts from the bird feeders grow in the garden - please note, however, that I do have to sweep up most of the spillage each night as sunflower hearts are loved by Hedgehogs, but are bad for them as it weakens their bones. I find the differences in the resulting plants to be quite remarkable. Most have single flower heads, but some have multiple heads and are quite showy. Here is one of them.

Wednesday, 1st September
This day started with a forecast of sunny spells with little breeze, and relatively warm temperatures for the time of year, so I decided to have an afternoon out, taking a picnic lunch with me.  I had two prime objectives, the first being to see if the Willow Emerald Damselflies had managed to establish a presence at Eyebrook Reservoir after them being a 'county first' for the species last year, and the second being a follow up on a tip-off from my old pal John Truman about a Red Kite location in Northamptonshire.
I arrived at Eyebrook and had a quick check around on the bridge, spotting a Kingfisher in the Willow by the inflow, 100 metres away. Not detailed shots of a Kingfisheer at this range, but I'm quite pleased with the atmosphere in these images. 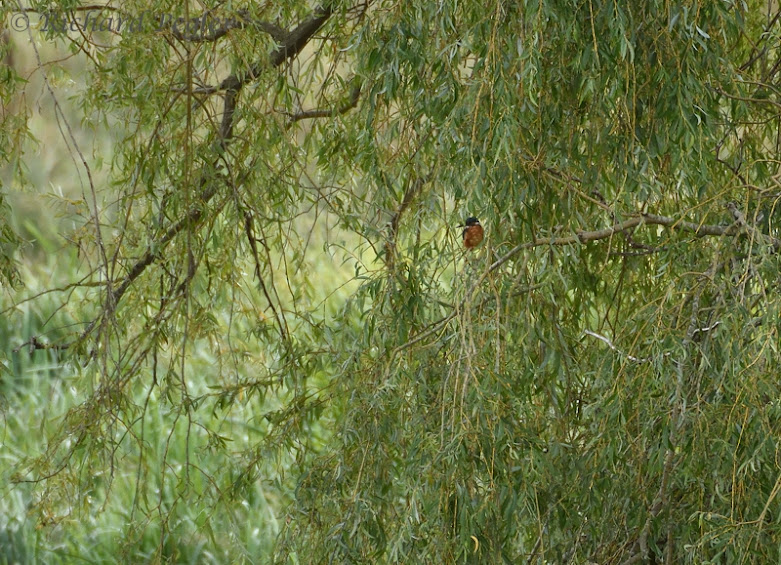 I had a quick picnic lunch before doing a thorough check of the brook below the bridge. Day-flying Silver Y moths were very active. I soon spotted my first Willow Emeralds with a pair in tandem on a fence post. This was more than a little exciting for me as Willow Emeralds had been out for a month or more in the south of England, but my recent visits to Eyebrook had not revealed any.
I very soon found a lone male.
- and then a lone female, but in a very awkward postion for photography - this was taken with the lens at the full 500mm (as were most of my shots from this session) and then heavily cropped.
I spent some time trying to photograph a mating pair, but they kept stopping in extremely difficult places, but I did eventually get a brief opportunity for a reasonable shot.
I did, however, get several opportunities to photograph pairs in tandem. 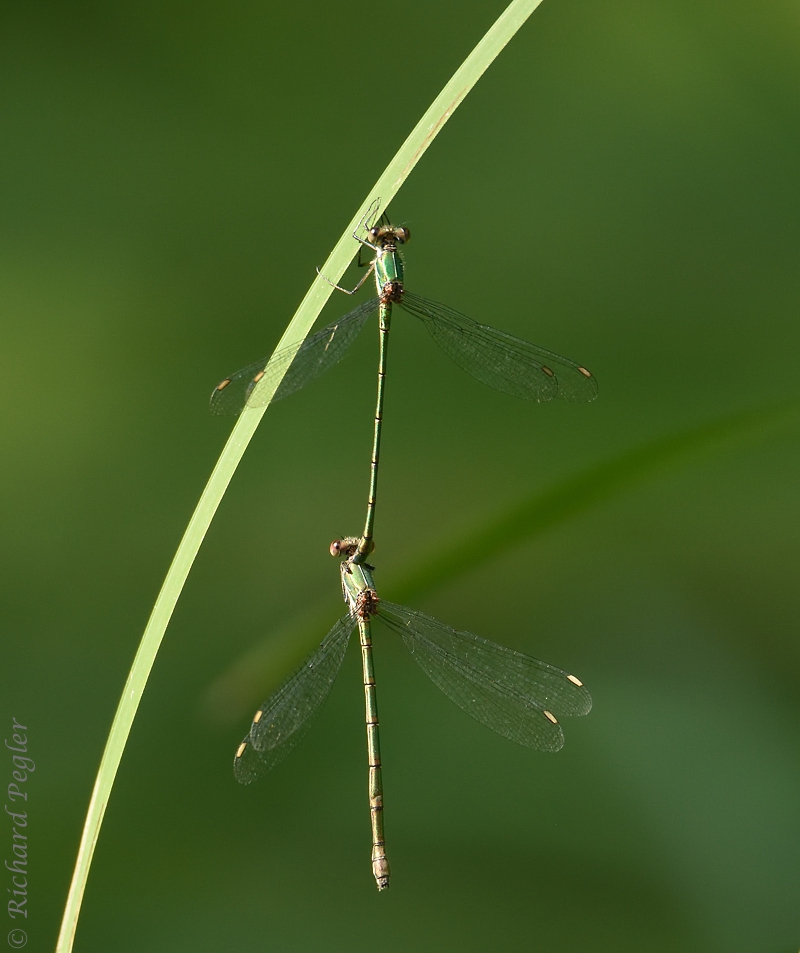 The single lone male also gave me some reasonable photographic opportunities and I managed some closer shots with the lens wound back a bit. The second of the two below shows the side of the thorax with the spur that is a diagnostic ID feature for this species. Whilst there, I saw at least three pairs of Willow Emerald, plus one single male and one single female. I also saw Southern Hawker (male) (not successfully photographed) and a male Banded Demoiselle.
I also took some photos of what, at the time, I believed to be a hoverfly. However, I now think that I have photographed two different species! The first, with its 'snout', is Rhingia campestris. However, the second, although it looks a little similar, does not have the diagnostic snout, and has a uniform bronze-coloured thorax. Any help with this one would be appreciated! My thanks to 'Conehead54' for suggesting that this is Ripponensia splendens.
I needed a rest from waving the camera about, and so decided to depart and head to the Northamptonshire location. It took a little finding but, having been aided by a helpful and friendly local person, I found it in the end, taking the recommended public footpath.
As I entered the area I saw a Red Kite on the ground in the middle of the next field to the one that I had entered. I'd only got a few metres down the footpath before it took off and departed. 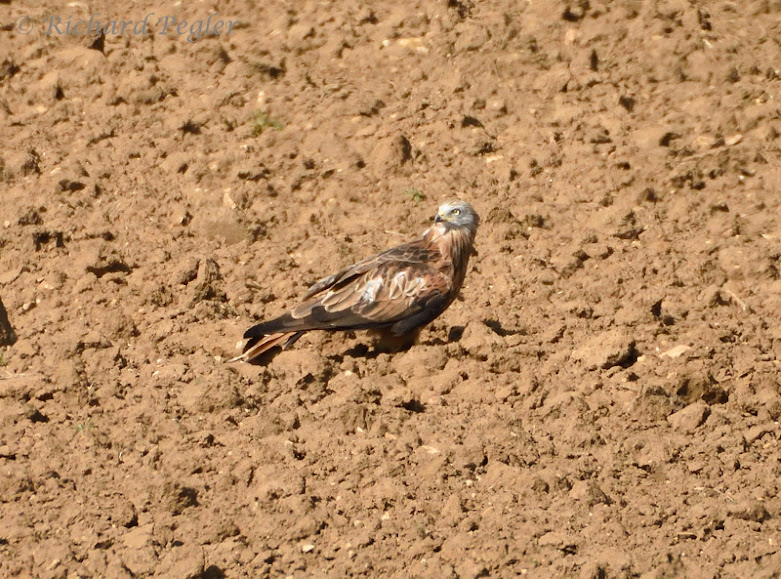 The next 'red kite' I saw was somewhat different!!
This little gem was even older than I am (just!), being built in 1945. It sports a De Havilland engine.
I spent an hour on the footpath, sitting on the stile that separates the first field from the second, and had just four very distant sightings of Red Kite, with almost no useable photos. This next shot is the best that I could manage.
It even got to the point that I was looking for anything I could photograph, including a passing Woodpigeon!
I decided to give up but noticed a Red Kite lurking in a tree at the far side of the ploughed field and so decided to walk a bit further up the footpath which ran at an angle to the bird's position so that I was not walking directly towards it. Halfway up the path I took this record shot.
I had just taken this shot when another Red Kite appeared and decided to put on a performance for me. Here are some of the shots I managed and am quite pleased with. 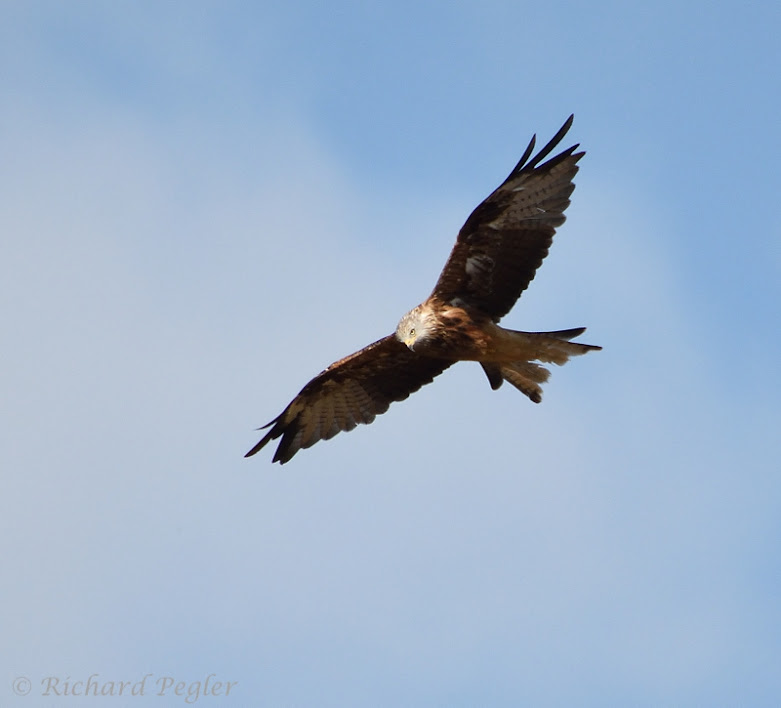 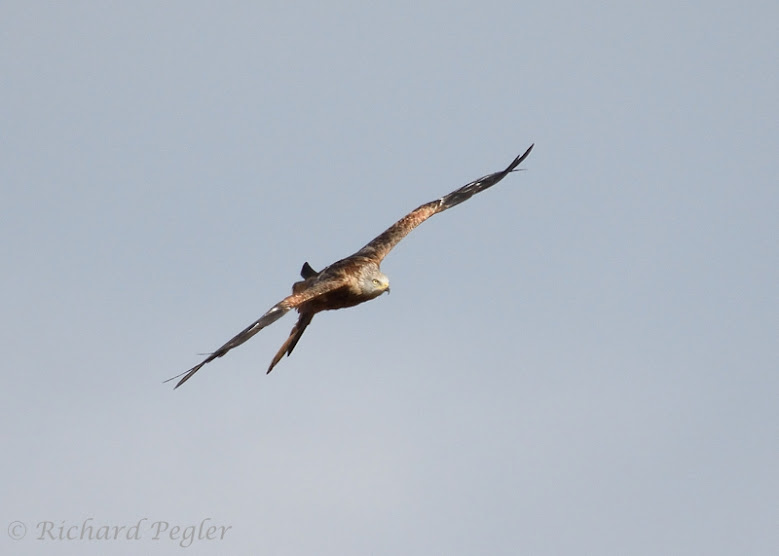 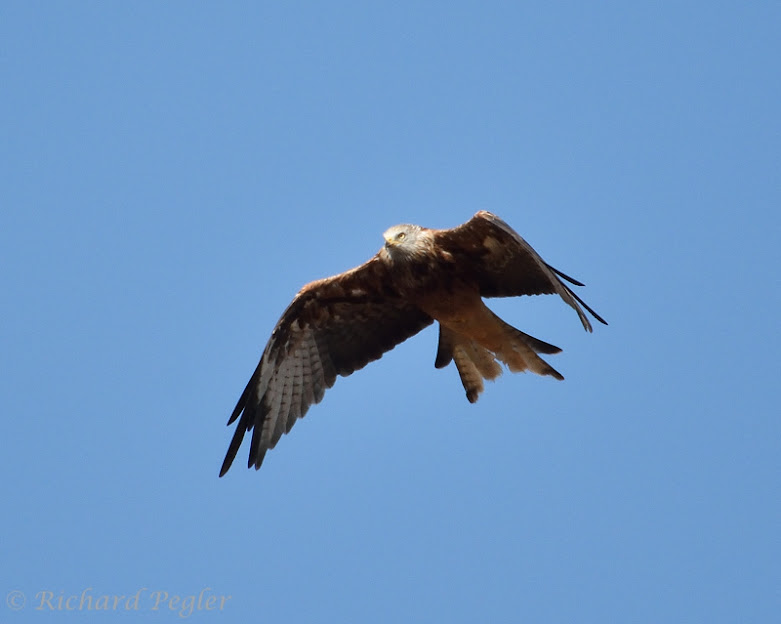 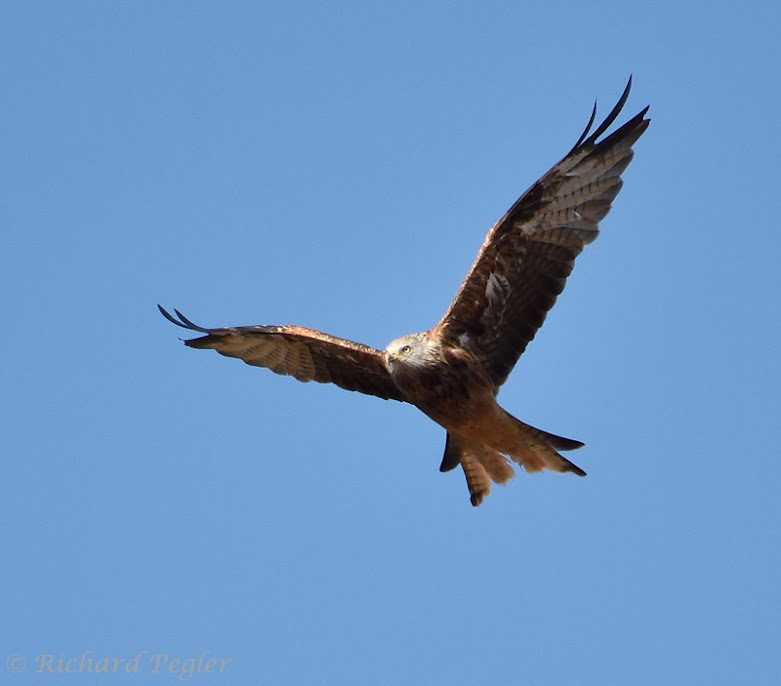 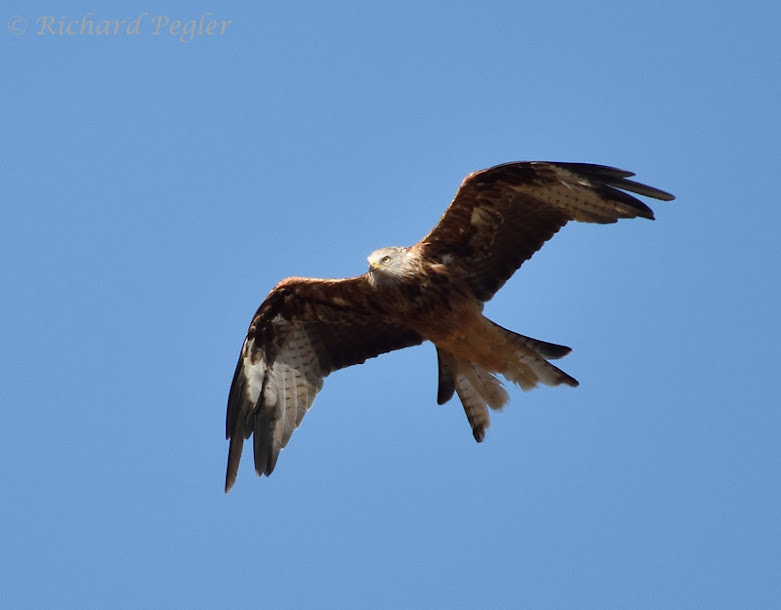 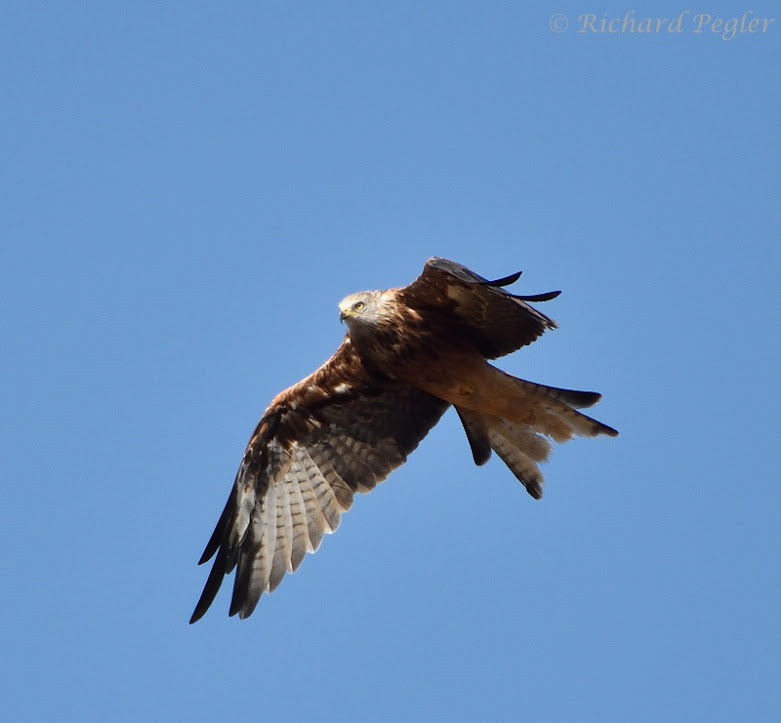 I noticed that all the Red Kites that I had seem seemed to be in partial moult of their feathers, and this might be why they were not showing so well as it seems they usually do.
It was now time to head back to my car for some much-needed liquid refreshment, and to start my journey homeward.
My route took me back via Eyebrook and so I stopped at the bridge to see if anything else was showing. I'm glad I did as I saw a pair of Willow Emeralds on a distant willow branch over the water, with the female ovipositing into the branch - as they do. I think that the image gives the impression that the female is having to put quite a bit of effort into drilling to deposit those eggs. When the eggs hatch, the new larvae drop into the water.
When on the bridge, an extremely well-worn and over-mature female Common Darter alighted on the parapet. 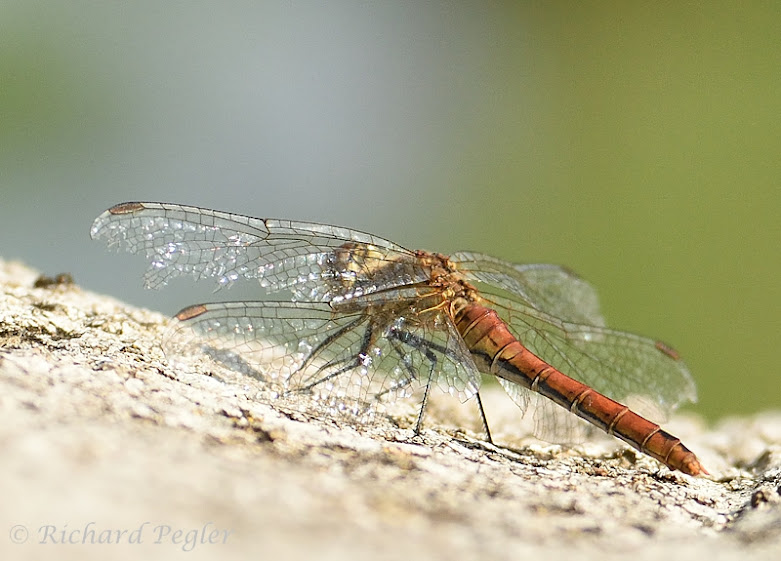 My day was now done, and I headed home after a very rewarding outing.
Saturday, 5th September
Nothing remarkable was observed in the garden until this day, when a Willow Warbler again arrived with a small mixed tit flock which included a Coal Tit - a species that has been elusive this year. All I photographed, however, was a Magpie.
Sunday, 6th September
We end this reporting period with another minor 'high' in that we were visited by a male Blackcap (the previous one at the beginning of the week being a female), and the Willow Warbler returned. Sadly, neither of these two were photographed, so all I can offer from that day is a juvenile Woodpigeon.
Thus ends my blog post. My next post will probably feature an outing from last week and a couple of items from the garden - and maybe a bit more, as well!
Take great care and stay safe.
Posted by Richard Pegler at 22:14