My wife and I went to South Devon for a three-day break to celebrate our wedding anniversary. It was definitely not going to be a birding break - I haven't survived 38 years of marriage without learning what side my bread is buttered on.This was a break for being together, and for looking after my wife's still very poorly knee.

However, I did take the bins and camera, and we did get intimate with nature on a few occasions. The result was a few very pleasing photos, with the best coming last!

Having checked in at Teignmouth on the Wednesday afternoon we took a drive to Labrador Bay. We couldn't get far because of my wife's knee. I was first taken by this huge thistle(?) head. 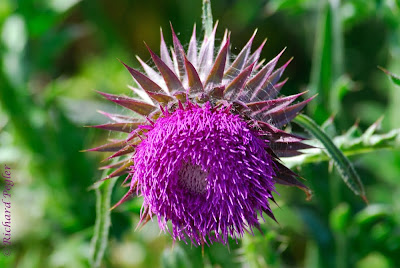 Thistle species ?
Not far from where we parked the car, a flash of brown and yellow flew up from a thicket and departed. Could I have just missed a male Cirl Bunting? - it would have been a 'lifer' for me! Moments later another bird flew up - and settled for a few seconds on a nearby post! I'm relatively sure that this was a juvenile or female Cirl Bunting, but if you want to burst my bubble I'd sooner know the truth! 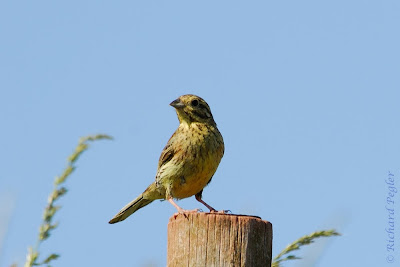 Cirl Bunting (?) (juvenile or female)
Having found our range limited at Labrador Bay we decided to head north, ending up at the seaward end of the Exeter Canal at the Turf Hotel for a drink overlooking the estuary. Unfortunately the tide was in so no waders were seen except those flying past in the distance. However, on the way back to the car we saw a few birds, including this Sedge Warbler that was probably gathering food for youngsters. 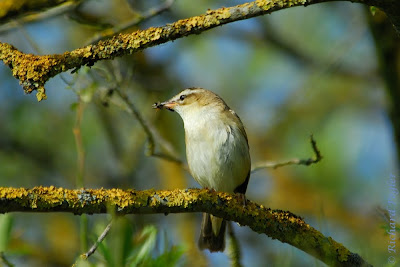 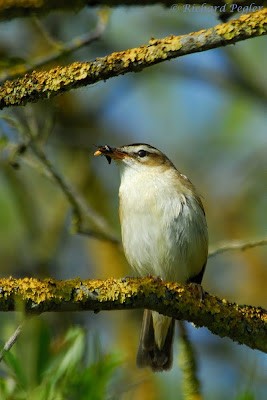 Sedge Warbler
We were up really early on the Thursday, and so went for a walk along the beach (the tide had been going out for a little while). It seems that the catch Sand Eels here using some sort of floating traps. It also seems that the local gulls have sussed this out, and we saw two (a Herring Gull, and this G B-b Gull) sitting on the floats and dipping down over the edge to pull out the Sand Eels. 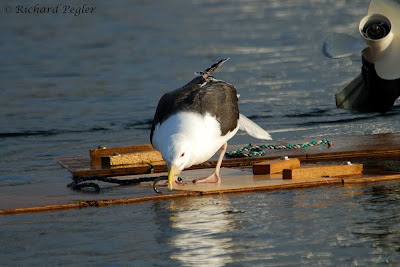 Great Black-backed Gull - fishing for Sand Eels
I'm not very good on Gulls, and thought the one shown below might be different to the Herring Gulls round about. It was somewhat smaller and behaving differently. However, having consulted the book, I can only assume that it is a small sub-adult Herring Gull - again, any comments would be welcome. 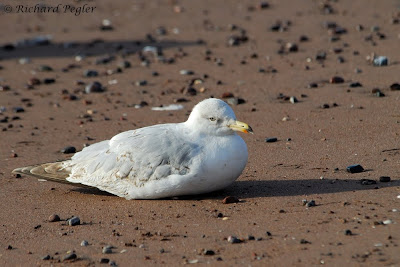 Herring Gull(?)
After breakfast we went to Oddicombe Bay, taking the cliff railway and getting there when it was still virtually deserted. There was not too much seen except Herring Gulls, and a lone Great Black-backed Gull. I nearly got a very lucky shot as a Herring gull came in to land. The image with its wings momentarily fully spread is totally uncropped! I just got it into frame - what a pity that it's out of focus! It's still in the air on the previous shot. 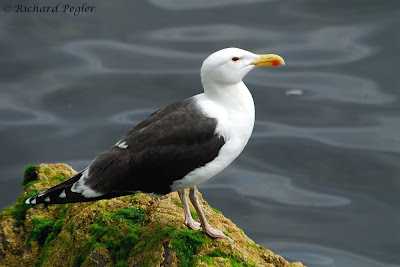 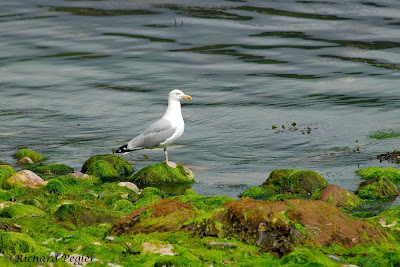 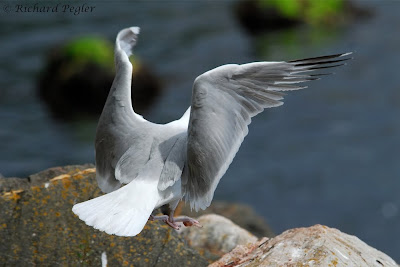 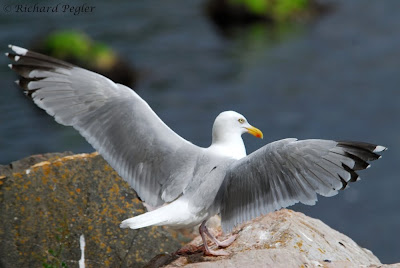 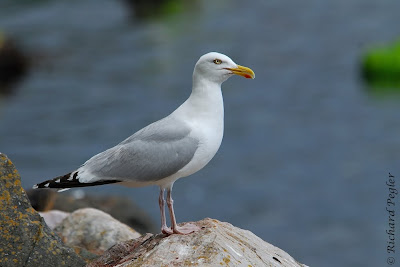 Herring Gull
We headed south from Torquay, ending up at Torcross, where we stopped for a gentle amble and an ice cream. Here we found these young Coot. I've always found Coot's feet to be somewhat comical, but the youngsters look like cartoon characters, with legs and feet that look three times too big for their bodies! 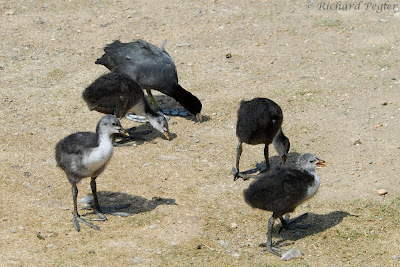 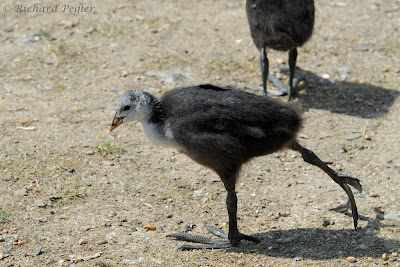 Coot
A couple of Jackdaws were also adding to the amusement here. Just round the corner I'm sure I heard a Nightingale sing very briefly - but I couldn't locate it. 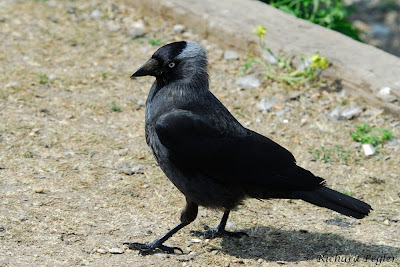 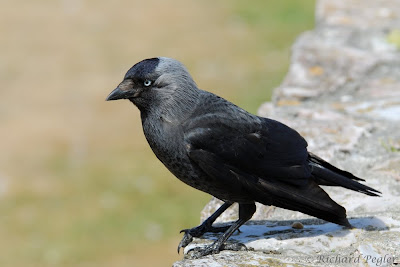 Jackdaw
In the car park I found this moth. It's not in my (rather feeble) book but I'm sure that it must be common 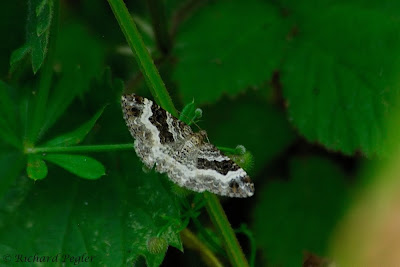 On our last day, we decided to travel home by the slow route, avoiding the motorway. We called in that the craft centre at Clevedon (Avon), in order to pick up a necklace that my wife had seen when we dropped in for a cuppa on the way down. They said that, if we called in on our way back home again, they would try and make a pair of earrings to match. We ended up with three necklaces as well as the earrings as my wife's anniversary present. I didn't do too badly myself! There is a guy here who wins Guild of Leatherworkers awards for his tooled leather pictures of wildlife. He had a ladies handbag with an absolutely fabulous picture of a Little Owl in a tree. He now has a commission to do me a similar image as a framed picture. The only problem is that I have to wait until December for it!

Those last images? They were of an obliging male Broad-bodied Chaser. I'm a bit limited with my birding lens as I do not have a macro facility on it. My nearest focal distance is 2.5 metres. I just have to rely on the magnification I get with the zoom lens at 400mm. I'm quite pleased with these particular results, however! 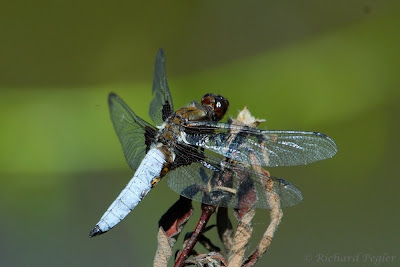