I had been somewhat disappointed that, apart from a distant view in near darkness on 29th June, I had not seen any Little Owlets. I then had a call from my good friend, and Little Owl guru, Paul Riddle who gave me directions to one of his sites (about 25 miles from my home) where he thought that I'd have a good chance of seeing owlets. I went that same evening.

I immediately spotted an adult Little Owl high in an almost bald tree as I arrived - not quite where Paul had indicated to me. The light was awful, with the sun behind the bird so that it looked as if the sun was shining out of its backside! A quick chat on the phone to Paul, and I positioned myself to await developments. 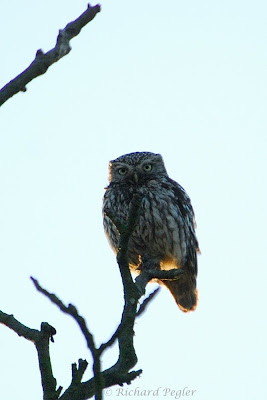 This owl departed during my positioning move, and settled on a wire in a field a couple of hundred metres away. Soon, however, a juvenile appeared, and perched on a branch in a tree that was only about 20 metres away. The light was going by now so high ISOs were needed and low shutter speeds. The images are, therefore, not too crisp. 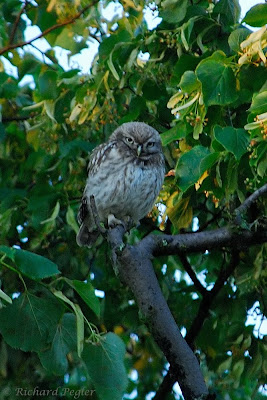 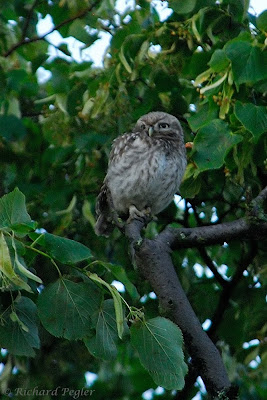 Suddenly the second adult bird (eyes closer together, and not such pale 'eyebrows') appeared on a slightly nearer branch and watched me inquisitively for a short while before departing. 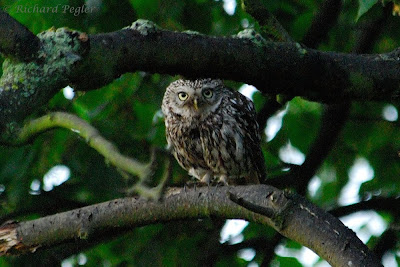 Almost immediately after this second adult departed, it was replaced by the second and third of the juveniles. 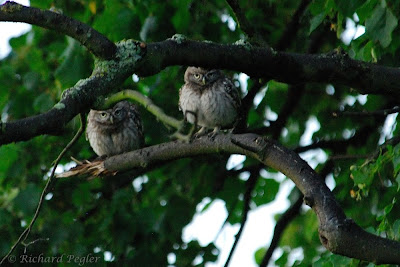 Juvenile No. 3 decided to be even more inquisitive and fly down into the grass on the other side of the road to me, immediately opposite where I had parked. It did this a couple of times, returning to the branch beside its sibling each time. 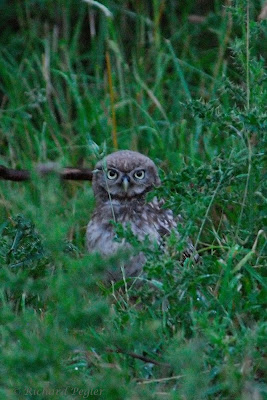 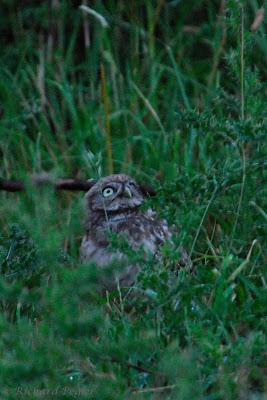 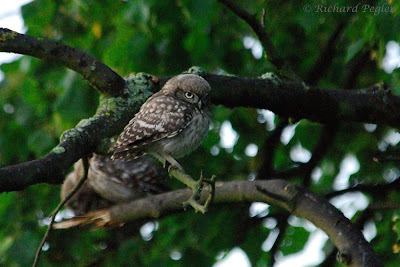 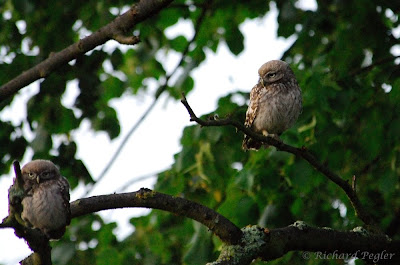 The two juveniles messed about on various nearby branches for some time before adult No.2 (which I imagined to be 'mum') arrived and clearly told them to move! 'She' then sat there for a short while loudly scolding me for taking interest in her children. 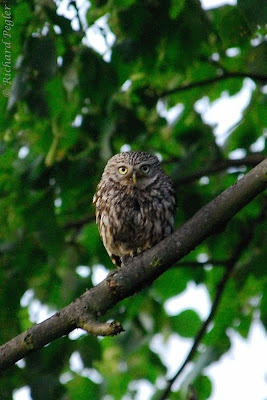 Immediately 'she'd' gone, juveniles Nos. 2 & 3 were back. This time they took less interest in me, much of the time demonstrating their 180 degree swivel heads by facing away from me (see below). 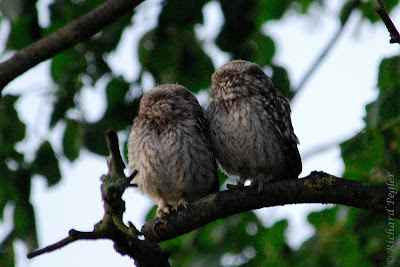 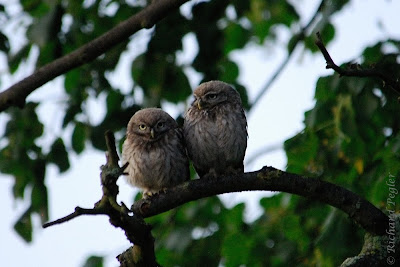 I must have spent nearly an hour and a half, absolutely spellbound by the antics of these owls. If I'm right as to which of the adults is the male, juvenile No.1 looks like its dad, No.2 looks like mum, and No.3 is somewhere beween the two. Eventually, adult No.1 returned to the same tree. My last image, although technically rubbish, for some inexplicable reason is one of my favourites. 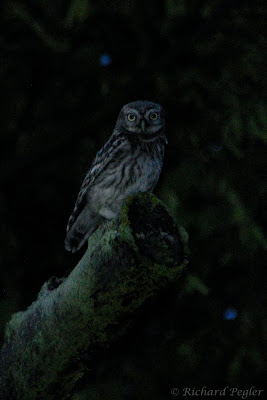 Adult No.1
I set off home in the darkness, but my excitement for the night was far from over. I'd only been going about fifteen minutes when a Badger ran out into the road from my left. It nearly got to the other side and then decided to double back. A quick application of the anchors and I missed it - just !

I'd got to about seven miles from home when I rounded the corner to find a Tawny Owl on the road immediately in front of me. Again I slammed on the anchors and came to a halt less than three metres from hitting the bird. However, it did not hang around long enough for me to take a long look, and flew up into the roadside trees. Although I have an interest in owls, this was the first Tawny I'd seen this year!

Wow! What a magical evening!!! Thank you Paul!
Posted by Richard Pegler at 14:55