The start of April has not been good for me on the birding front. A lot of time has been spent preparing our boat ready to sell it - and then my wife went down with flu' (she's still pretty poorly as I write this!). This means that I have not been able to get out much. However, in the first week, I did manage a turn of duty (on Osprey watch) at Rutland Water on 7th, followed by a meeting at Rutland Water the following day.

On my way to Rutland Water, I called in at one of my recent Little Owl sites, near Oaks in Charnwood. Since my first sighting of a single bird here in March, I've not managed to re-locate it, and I haven't got an image of it! However, it has been seen by someone else, so I'm confident that it's around somewhere. On one of my most recent visits I put up a drake Mandarin as I approached the site. On this day, in the field with the tree in which the owl had been seen, I spotted a pair of Mandarin before they saw me. I managed a couple of quick images before they spotted me and were off. In my experience, Mandarins in these parts are EXTREMELY skittish. However, on the Thames, I've had them (admittedly nervously) come to the boat to take bread. 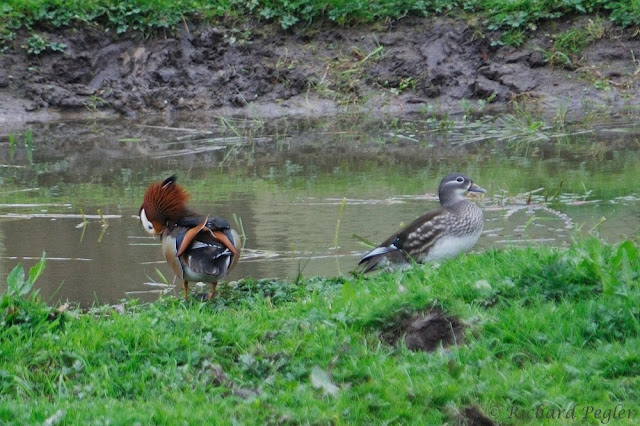 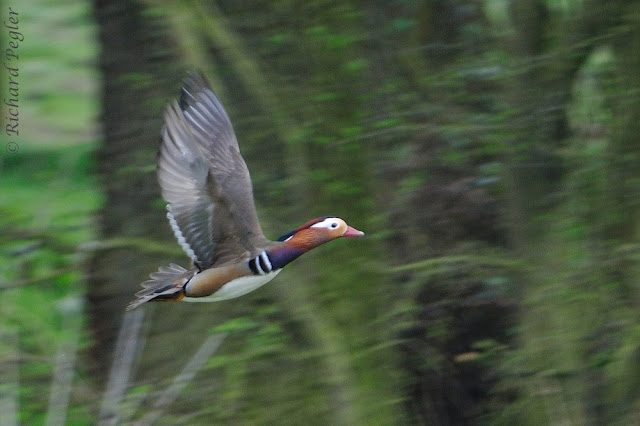 Continuing to explore this area in the hope of locating an owl, I found a second pair of mandarin in the brook. Whilst I watched at a great distance, they left the brook and entered the field. Soon they saw me and were gone - so only very distant and highly cropped images of this pair. 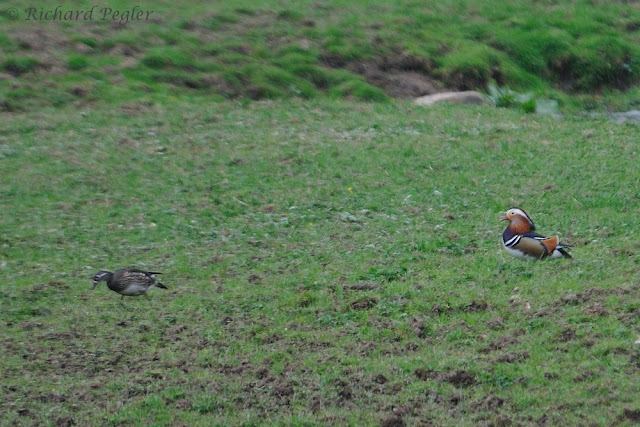 I failed to take any usable images at Rutland Water, although both Ospreys were in attendance during the whole of my watch.

There was an Osprey Volunteers' Meeting at Rutland Water in the evening. Again I called at my LO site near Oaks in Charnwood. Still no owl, but again I found a pair of Mandarin in the brook (no images), and a lone drake in a tree beside the brook in the distance.

My route to Rutland Water is a splendidly scenic one, and my favourite bit is round Marefield, although it is not particularly 'birdy'. I did stop to photograph a Hare and, further up the road, a Pheasant which crossed ahead of me.

I arrived early for the meeting, which was at the Egleton side at Rutland Water, so went off for a look around the reserve. Lagoon 4 held most of the interest, although most birds were too far away to photograph with my kit. A flypast by a couple of Canada Geese, and a Redshank on the shoreline gave me some photo opportunities. 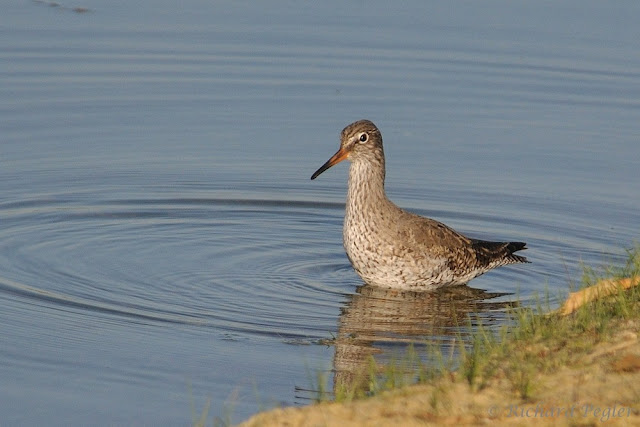 At about this time, my wife went down with flu', and I've been 'running the household' since then. My cats decided to help by bringing home some food.
Wednesday 13th April
One of the cats brought home a couple of young rats - about half the size of a full-grown Grey Rat, but still fully furred. Rather than put these in the bin, or bury them, I thought that I'd take them down to my local patch to see if they were of interest to my solitary Little Owl at my Site No.02. I arrived to find the owl on its favourite perching place (see image below). I placed the rats on the wall in full view of the owl, but it didn't respond. Having taken a photo, I set off home to look after the wife.


Thursday 14th April
The cat left me another young rat, and this was, again, taken to the owl. However, when I was a about 800 metres off, I noticed a suspicious-looking shape in a tree off to the right of the road. I quickly reversed back - and yes, it was a Little Owl! Having taken a distant 'safety shot' from the car, I parked up and tried to get a little closer. However, I didn't see the second owl until it flew out of the ivy in the tree before the one that the first was in. It flying off caused the first one to follow, so I'm only left with the record shot (see below). I'm amazed that I've never seen an owl here before as it caught my eye without really looking, and I must pass this way three or four times a week. My nearest Little Owl site to this is my No.10, about 400 metres back down the road, where I haven't seen an owl since April last year, and I have no images. Perhaps these birds were the relocated birds from No.10. Anyway, I'm going to give myself the benefit of the doubt and call it my new Site No.20! This means that I have had five LO sites on my local patch (although only three seem to be currently active) - three of them on the same farm!
When I got to site No.02, the rats from the previous day had gone, and the replacement was left.
Friday 15th April
Another day - another rat! On the way to deliver it I saw that the bird at new Site No.20 was out again, and in virtually the same place. I did have my camera with me, but the light was poor and the images were somewhat worse than those of the previous day. At Site No.02 the previous day's rat had gone from the wall.
Saturday 16th April
Having ensured that my wife was settled in bed, and would be OK for an hour or so, I set off to Staunton Harold, where I've two LO sites. There was nothing visible at my Site No.01 - not surprising really as I've not seen an owl here since January, 2010, and there were two tractors working the field that the nest tree is in the middle of!
Earlier this year I found that the pair at my Site No.08, on the same estate, had moved to a new nest tree, although I did not have full confirmation as to which of the holes in the tree was the nest hole.  Today I got that confirmation when one of the owls popped out of  a hole when I was some way off, saw me, and popped back in again, followed a few seconds later by a second bird which popped out, saw me and, after hanging around for a minute or two, flew into another tree.This second bird was the confiding one of the two, and I did manage to follow it to the tree and take a few shots before leaving it still sitting in the tree. 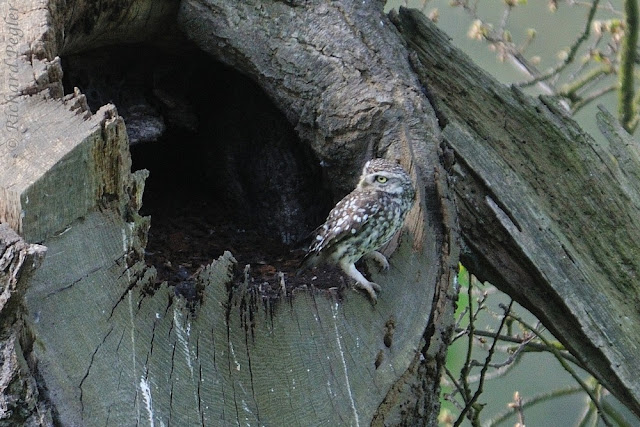 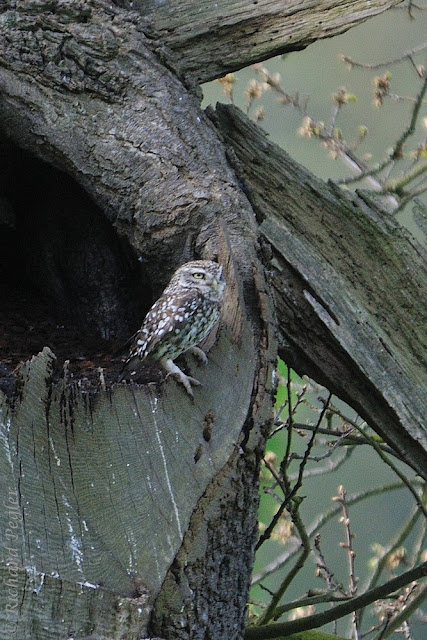 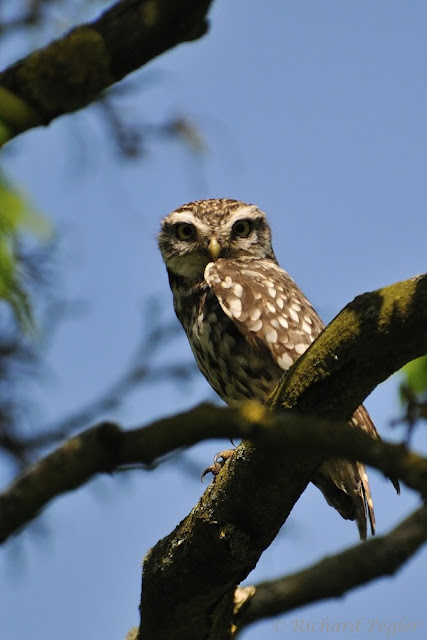 I'm hoping that my wife starts mending soon - she's having a really miserable time of it at the moment - and that I'll be able to get out before too long to do some serious owling.
Posted by Richard Pegler at 16:33