At the end of my last post, which was about a fine male Redstart in our garden being the bird that caused us to break our annual garden record for bird species - less than a third of the way through the year, I promised that my next post would be about Barn Owls. I was tempted to break that promise as, just one day after writing that post, we added another garden first for the year in the form of a Willow Warbler. However, as that is just an LBJ, I've decided to keep my word!

On Thursday, my pal Titus (he who has Barn Owls nesting in his garden) and I did an evening shift on the Osprey Project at Rutland Water.  It was a very dull and murky evening, occasionally interrupted by rain. At times it was not too easy to see the Ospreys, but they were quite active for the first half of the shift. At that time, there was one egg in the nest. I expect that, by now, there are three!

Distractions were in the form of a Muntjac that was foraging round the hide, but all was quiet otherwise.

I'd been keeping a weather eye on the owl box which can be seen from Waderscrape hide. Three Barn Owl chicks had fledged from this box last year. However, no Barn Owl was seen to so much as poke its head out of the box. I was, therefore, quite surprised to see a Barn Owl appear to the left of the hide at 19:27. The light was, by now, really awful and the prospects of getting a decent flight shot were nil. These were the best that I could manage. 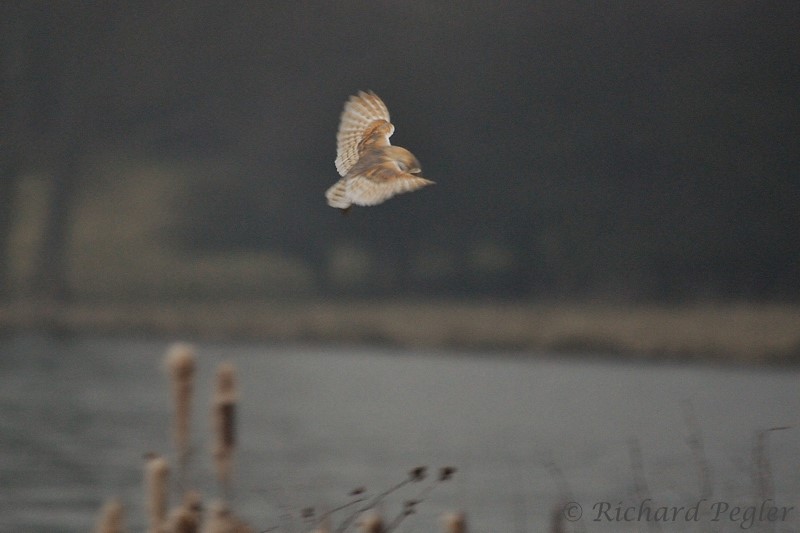 The owl was soon lost to sight, round the back of the hide, and Titus popped out to have a look. He was gone a few minutes, and then popped back to say that there were two owls hunting, well apart! I continued watching the Ospreys whilst Titus alternated between owls and Ospreys. When he told me that an owl had settled on a post, I couldn't resist popping out to take a few shots. Unfortunately it was a long way away! This was at 19:35 and 1/80 sec. handheld at ISO 3200.


After this, one of the owls started circling the hide, and at 19:57 it settled on a distant post in front of the hide, by the water's edge. It was nearly fully dark by now and I wound down the exposure compensation in order to more accurately depict the light conditions at the time, and also to give me the best possible chance of getting any image at all!


We continued to watch the owls and the Osprey for a while but then shortly, at about 20:05 we decided that we'd better pack up and go home. We'd enjoyed well over half an hour with Barn Owls flying around. I'll never know whether I saw both of them as Titus was the only one who saw two owls at one time! I was pleased that I'd brought a torch with me - it was much needed as we packed everything away!

The following day I had a phone call from a good friend (you know who you are - thank you, you're a star!) who said he'd been talking to one of his customers who told him that he was seeing a Barn Owl every morning between 06:30 and 07:00 on a certain stretch of road. It was spending time hunting along the road,  but could also often be seen sitting on a freshly cut roadside hedge. My pal suggested that, as it wasn't too far from me, would I like to go and investigate? In reality it was about 15 miles (24km) from my home, but I've got some Little Owl sites in the vicinity and knew the area reasonably well. I went and spent that evening at the location to check it out, and hoping that the owl frequented this place in the evening too. Nothing was seen, however.

My alarm clock was set for 05:00 and, next morning, off I set. I arrived in the half-light at 06:20 to see a Barn Owl flying down the road towards me. I'd already sussed out the parking situation so was able to throw my Smart car into a gap and wait. It kept flying towards me and then, when it was only about 4 metres in front of me, it crossed over in front of my car! I know, from past experience, that there is absolutely no point in trying to take photos through the windscreen of the Smart. They just end up a blurry mess! Besides, it was far too dark for a flight shot.

The owl then set off back up the road, flew off into the nearest field where it settled for a while, and then came back to the hedgerow some distance away and headed back towards me. This one was taken at 06:29, 1/250 sec at ISO 2500 (the light was still very poor).

It continued slowly towards me and then, to my delight, landed on top of the hedgerow in a position where I could take shots from inside my car. I stood a chance of some semi-respectable photos. This one was 1/250 sec. at ISO 800

It stayed here for a short while and then it was off again, continuing up the road ahead of me and sometimes diverting into the fields on either side of the road. It seemed to me that it had no intention of coming back my way so I set off on foot to follow it, keeping as close to the hedge as possible to make myself less conspicuous, although I suspect that I was fooling no one!!

For virtually all the time, I was at a distance of  over 100 metres, and this only allowed 'habitat' shots. Frustratingly the light was improving all the time and the sun was shining, although still low on the horizon. 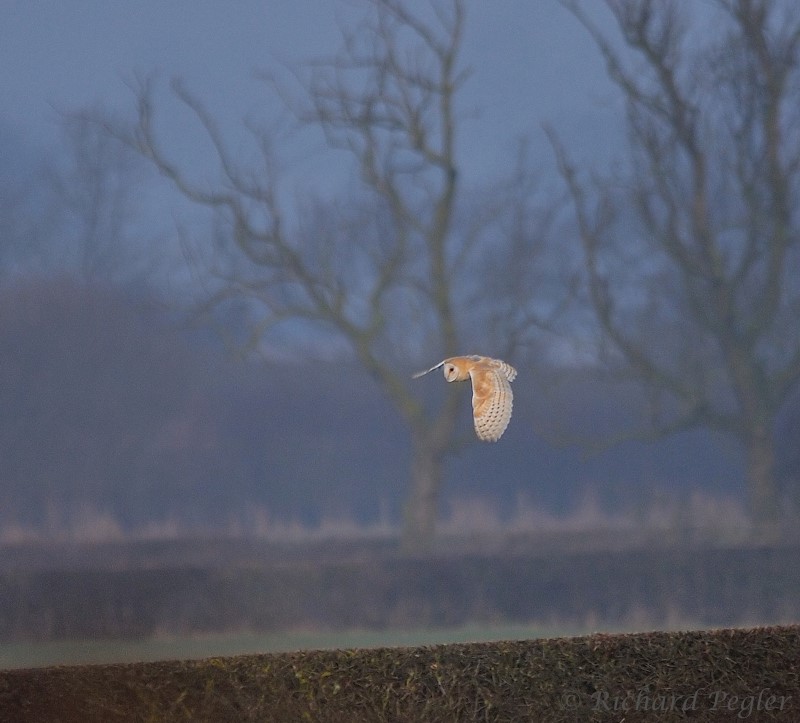 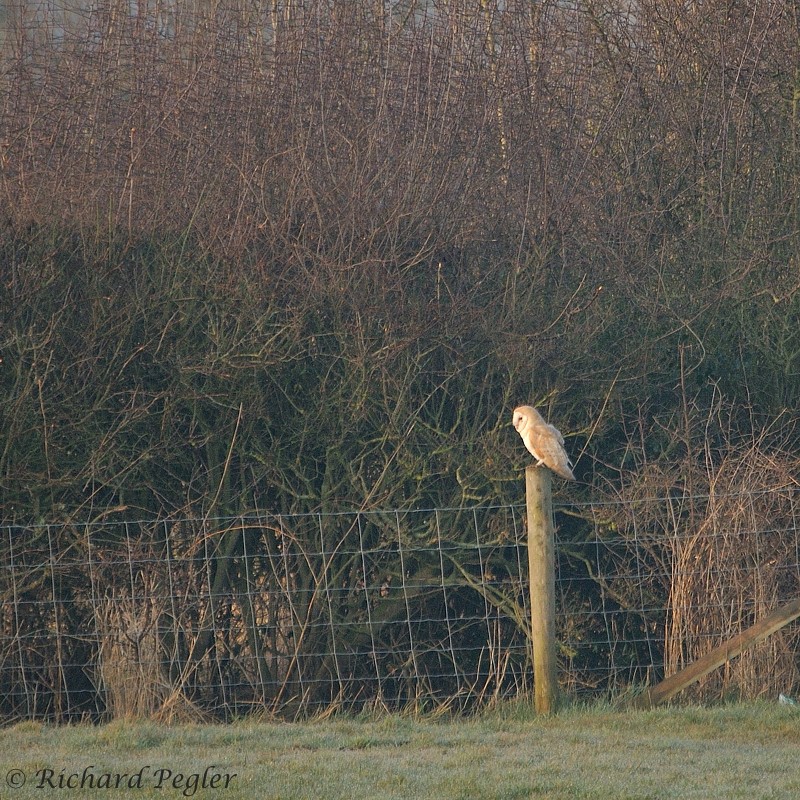 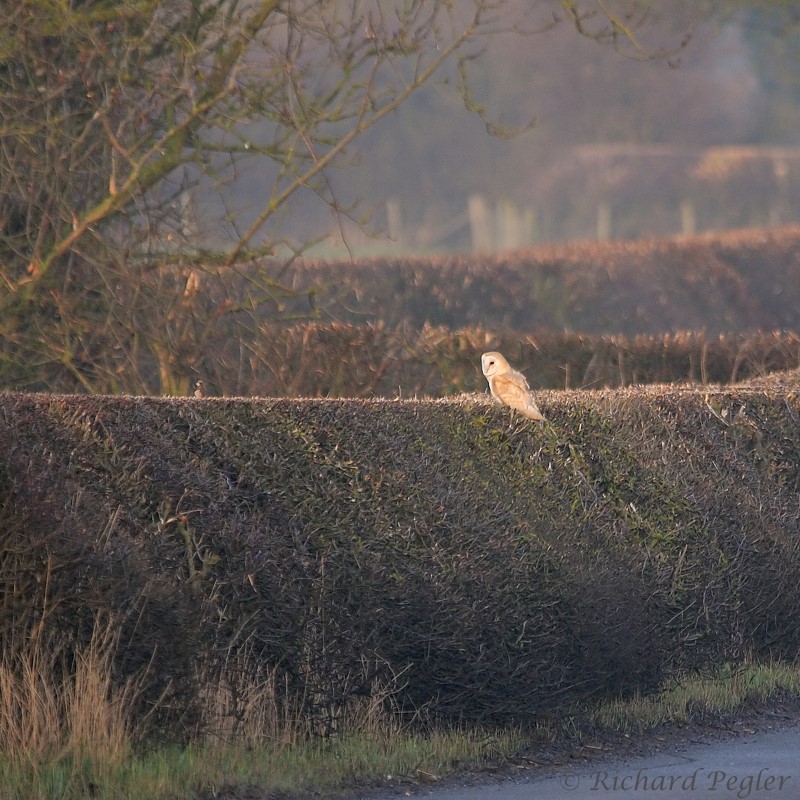 I was getting nowhere fast with the photography, and had followed the owl for over a mile when it suddenly turned and started flying back along the road towards me. Fortunately I had the presence of mind to wind the ISO up for a flight shot, and grabbed a number of frames, including the following two images, which I'm not too disappointed with, taken at 1/1000, ISO 1000 - what a difference to light a few short minutes can make! 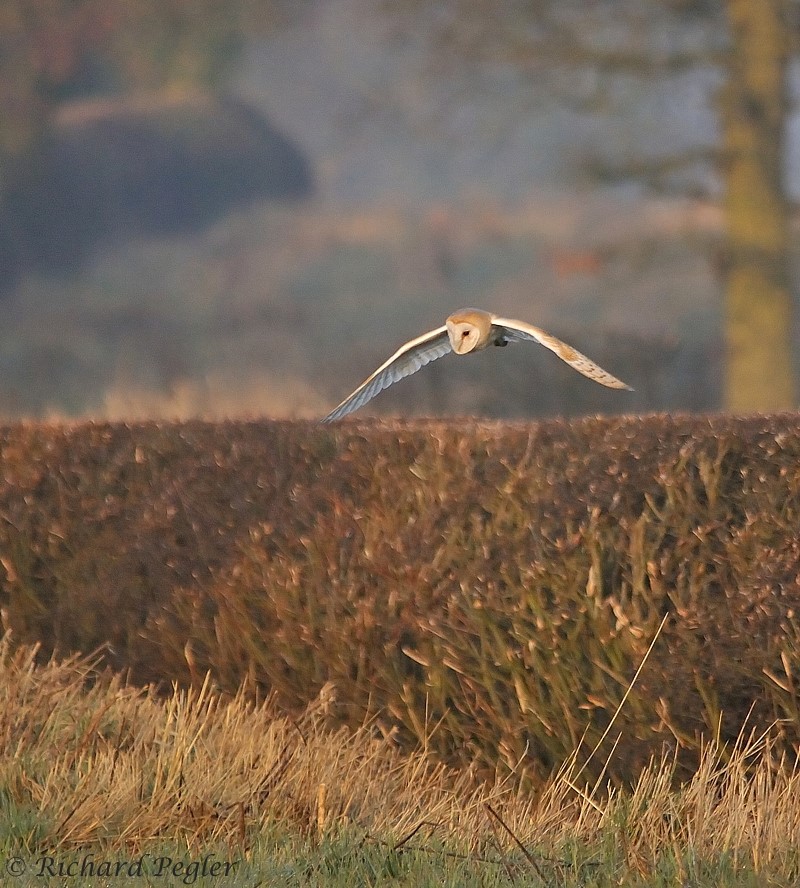 Immediately after this last shot was taken it flew up into a tree directly over the road from where I was standing - and settled behind a thick branch which almost totally obscured its position. Damn and Blast! I tried to move to a better spot but it was off again and then landed in the next tree along - again obscured by a branch, but this time only partially.

It only stayed here a couple of seconds and then was off up the road again. It was now time for me to leave things alone until another day, and head home for some breakfast.

This was a parting shot of the departing owl. I'd had 40 delightful minutes of its company, and was feeling very happy!

On the way home I dropped onto a couple of my Little Owl sites, but only spotted two owls at one site. Little did I know that, a couple of hours later, I was to see a Redstart in my garden!
Posted by Richard Pegler at 20:45