In my last post I said that, in spite of concerns about time availability and weather, I'd had a pretty good December for Little Owl sightings, with my third best month of the year. By half way through this January I'd overtaken the total for the whole of December, in terms of both number of sightings and number of sites that birds were seen at. I'm already at a point where only four months over the past four years have ever beaten the current total in terms of numbers of sightings - all of them months boosted by fledging juveniles! And there are still twelve days of the month left to go!

On 2nd January, a most enjoyable afternoon's owling was had with my pal Titus, with six owls seen over four different sites.

I'm now more than 95% sure that the pair of owls at my Site No.34, whose home was destroyed in gales at the back end of last year, have set up home in a tree on the opposite side of their field. However, I'm not sure how comfortable it is for them as they spend nearly all their time roosting in a Hawthorn nearby. Sometimes they can be really hard to see when they're in this bush. In this next image, however, the two of them are showing reasonably well.

Soon after this we were at LO Site No.34 where, in November, we'd been delighted to find an owl had returned as the nest had been deserted after the pair had been evicted by Jackdaws in the spring. From our position in our car it looked as if there was a second bird tucked in behind the one at the nest hole entrance.

As we departed, I stopped the car in a different place and we could see relatively clearly that there was, indeed, a second bird. This is excellent news - if they don't get evicted by the Jackdaws again!

A short while later I spotted a Little Owl in a stumpy tree, where I'd never seen one before although I pass by regularly. At first I was concerned that it could have been a bird from Site No.34, but I've now determined beyond reasonable doubt (via subsequent sightings and observations) that this is a new site (my No.43, and the first new site of the year, just two days in!), although there is some suspicion that this bird may be one of the pair from nearby Site No. 36, also displaced by Jackdaws last spring. I've seen this bird several times now, but I've never managed a clearer image than the one taken at this first sighting. Looking at where it perches, it's no wonder that I never spotted it when the leaves were on the trees!

On 8th January I had a relatively successful owling morning. It started with seeing one bird at my LO Site No.02. In a post about six weeks ago I published a similar image to this next one. However, I prefer this one as the lighting strikes me as being a bit more moody - incidentally, this was only the third time in about five years that I've seen this bird perched in this particular spot.

Not far away from 02, but well off the beaten track, is my LO Site No.30. In my last post I said what a problem the twigs were as far as photography was concerned. However, this owl seems to be quite confiding and I managed to get closer without disturbing it, The twigs were still a problem, but this is probably as good as I've managed here to date. 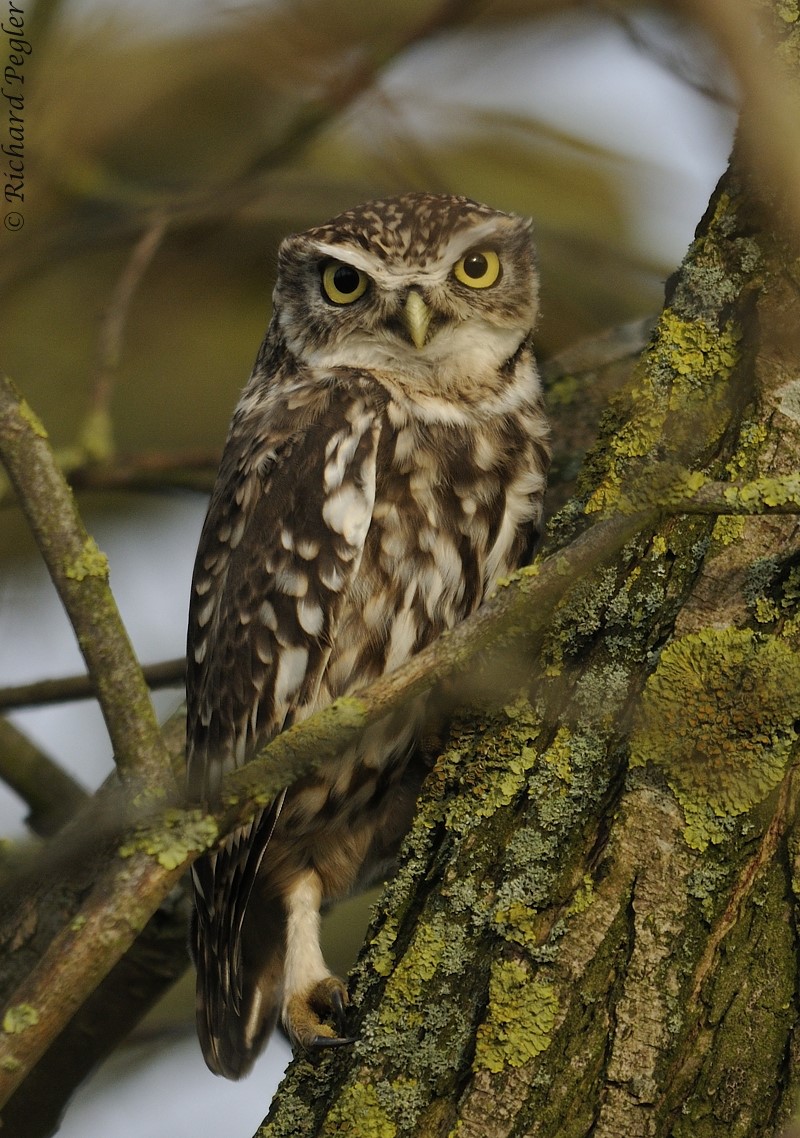 Another good day owling with Titus on 9th January, starting with acting on a tip-off, brought me a new Little Owl site. I'll not mention the name of the tipster to prevent him from being pestered, but just say thank you. As it's close to one of my regular owling routes, I shall be monitoring it, and it will be my new Site No.44. This is one where photos can be taken whilst driving by without disturbing the bird, although at the time I'm usually out this way, the light is directly behind the bird 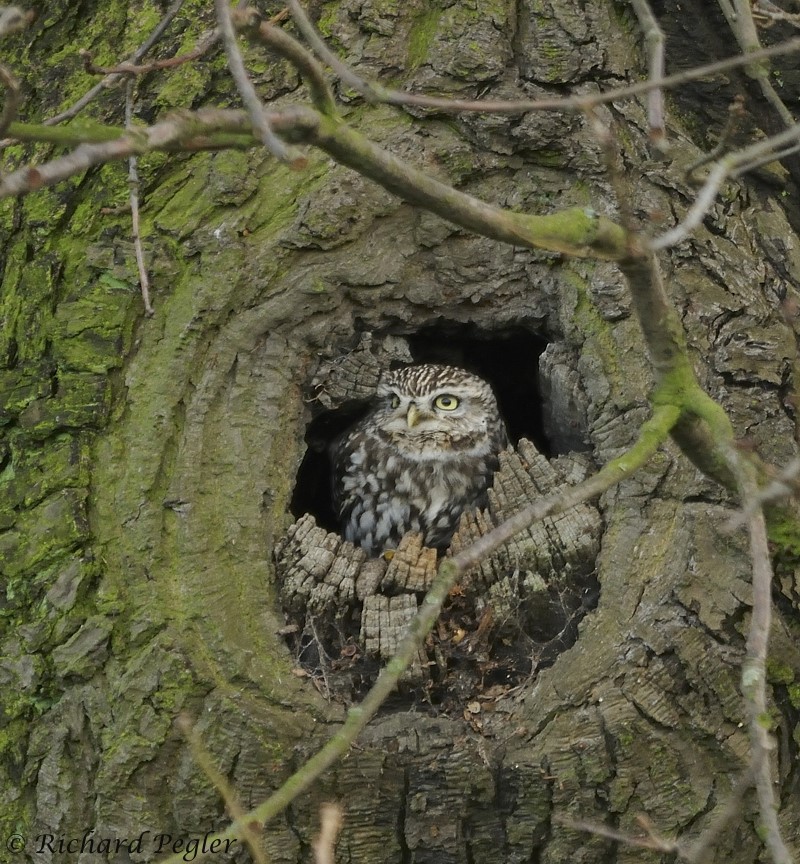 A brief trip out on 11th was not so successful, although I did find one of my Little Owls at at Site No.06, just as the sun was sinking down with a beautiful golden light. 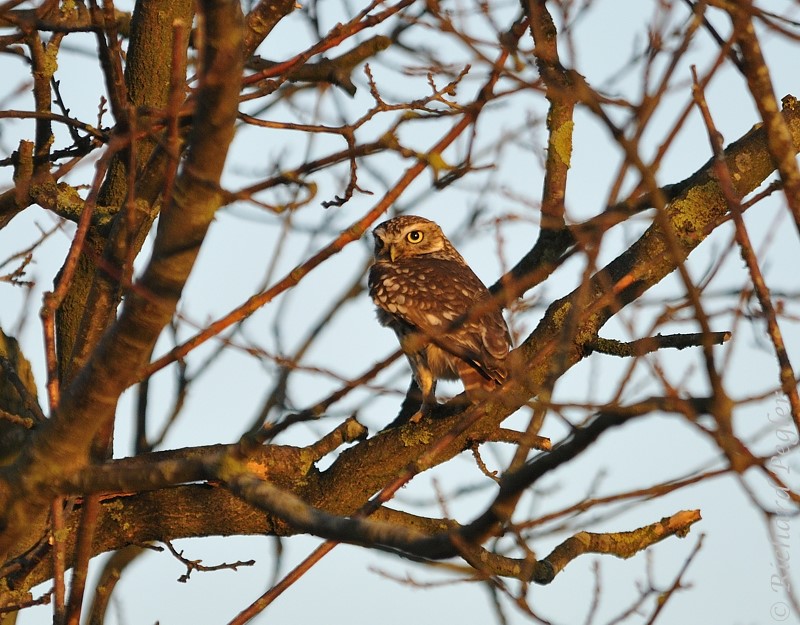 On 14th January I had an eight-owl day over six different sites. The header image which I'll put up with this post (but probably won't be there if you are looking at this post a month later) is from this day. I also found the LO out at Site No.44 as I passed - I did mention that the light was adverse here!

On 16th, I had a couple of hours out on my own, before meeting up with Titus for an afternoon's owling. By the time I'd picked Titus up I'd already seen four Little Owls over four different sites, including my Site No.30. Now I know I've complained at length about the twigs here, but the owl was playing even harder to get on this day - see below!

I was also pleased to find a LO showing at my Site No.03 - the first sighting since August, in spite of several visits. I then set off for Titus's place arriving a little late because of floods barring my route. 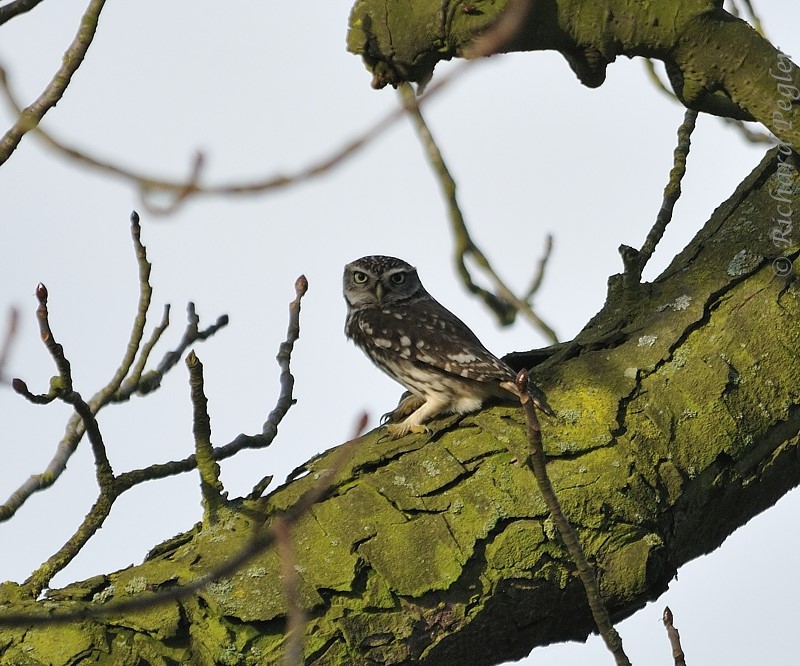 By the time that my day was over, I'd seen ten Little Owls over eight different sites. The real highlight, however, had  to be at my latest LO site, No.44. As we passed, there were two owls out, looking very cosy together!
It doesn't always work out like that last day. I had a few hours out this morning (chilly, but no wind, and sunny) and only managed to turn up one owl!  However, it was at my Site No.03, so it seems it's back again. 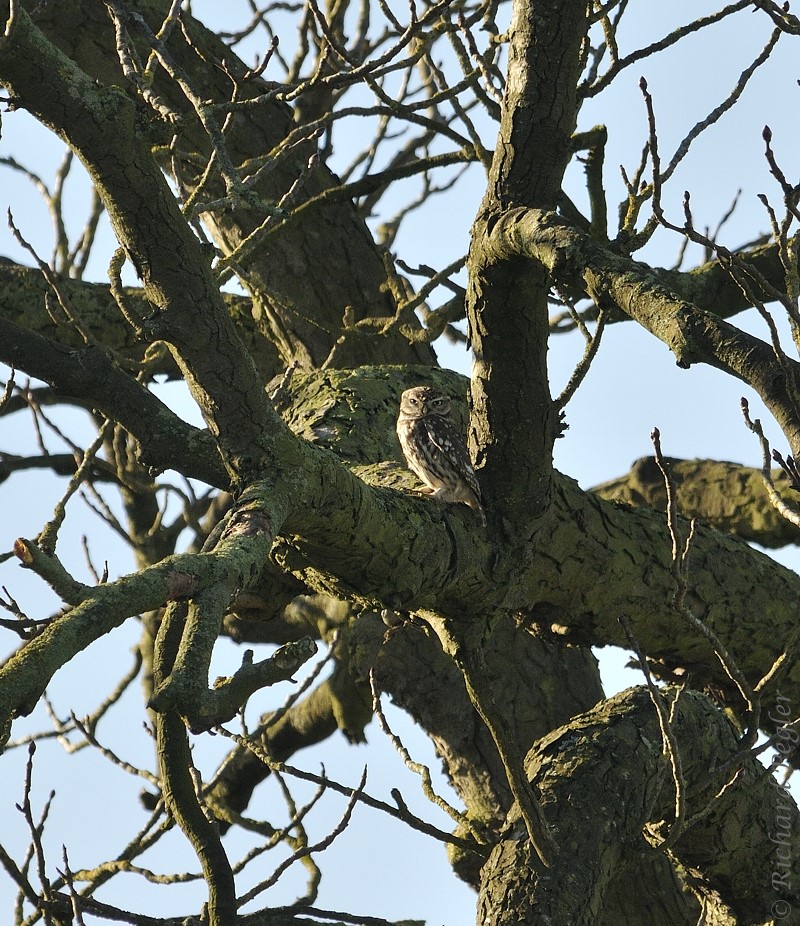 I can't see my luck continuing for the rest of the month - but you never know!!

Thank you for dropping by.
Posted by Richard Pegler at 17:58