Some readers of this blog may know that I'm one of the large team of volunteers on the Rutland Osprey Project (link). Because it's about a 90 mile (145 km) round trip for me, all of which is cross-country, to keep travelling costs and time down I only do a turn of duty once a fortnight during the Osprey season. This will be my eighth year, and for the past two years I've been accompanied by my pal, Titus White. I like to do an evening shift, between 17:00 and 20:00, at Waderscrape Hide. This usually means that for the first part of the evening we have the company of visitors to Rutland Water, and part of our duties is to make the visitors welcome, and help with any questions about the Ospreys. It also means that, for the latter part of the evening, we are able to enjoy the tranquillity of this remarkable location.

The evening of Thursday 3rd April was the occasion of our first turn of duty for the year, and much of the UK was in the grip of the worst smog that's been seen for decades. The prospects for an interesting session were dubious - but more of that later.

Because we make the journey regularly, we've managed to find some owl sites en-route. Virtually all these have been Little Owl sites, but Tawny and Barn Owl are sometimes seen. I managed to see a Little Owl on my local patch, on my way to pick up Titus, but the photography was not good because of the smog. 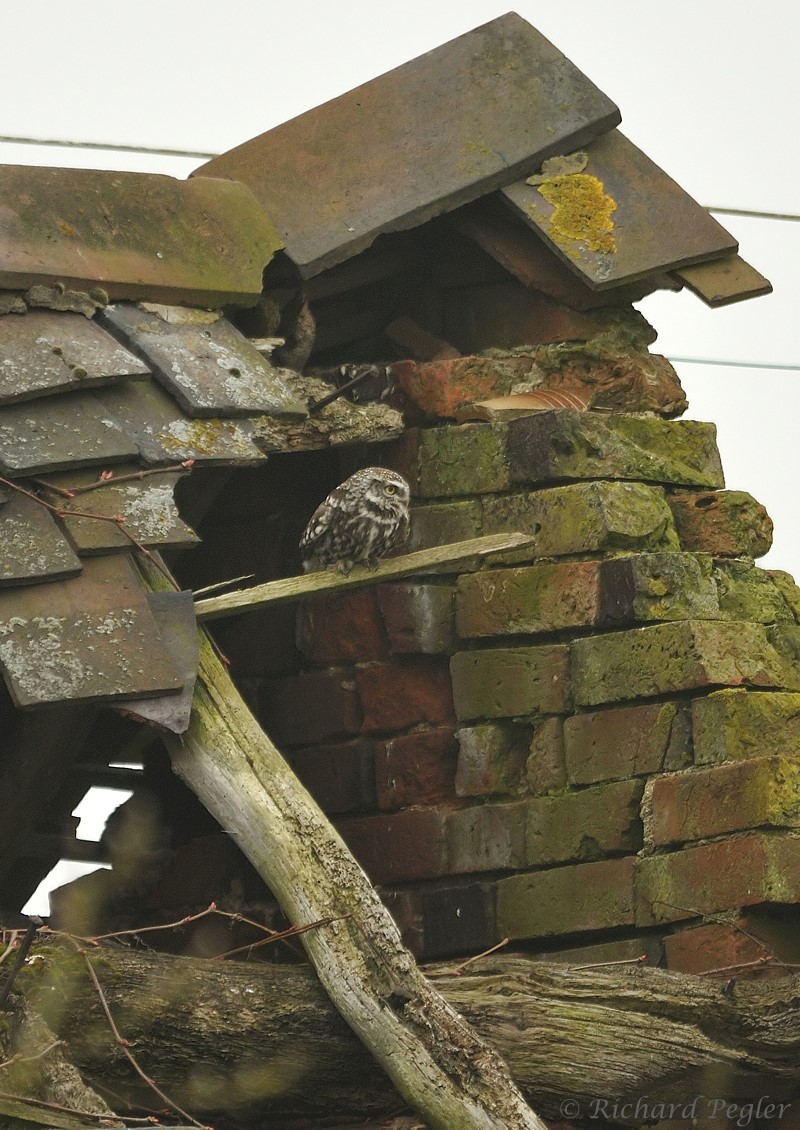 Six more Little Owls were seen over four sites on our way to Rutland Water. Amazingly, the owl seen at my Site No.41 was in exactly (and I do mean exactly) the same position and pose as when seen one week previously (see previous post)! Here's a few images from the journey.

We arrived at Rutland Water with time in hand before starting our duty. A chat with Paul Stammers (Osprey Project Officer) confirmed that the Manton Bay male Osprey (5R) had not yet returned, but the unringed Manton Bay female was present. We joked that 5R was waiting for Titus and I to be present as he'd arrived 5 minutes after we'd started our first shift in 2013!

With time in hand we did what we usually do, and that is to visit Shallow Water Hide, a bit further on than Waderscrape. Two things struck me on our arrival. The first was that the water level was as high as I've ever seen it before, and the second was how poor the visibility was, due to the smog.

We only had  a few minutes to spare here, but that was enough to allow us the delight of watching courting Great Crested Grebes. It's easy to forget just how spectacular these common birds can be. Shame about the very dull conditions! 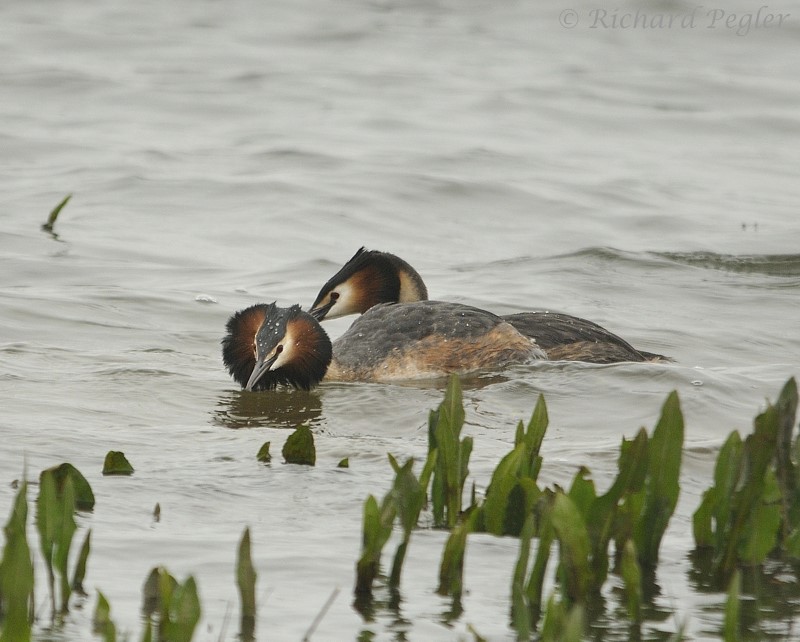 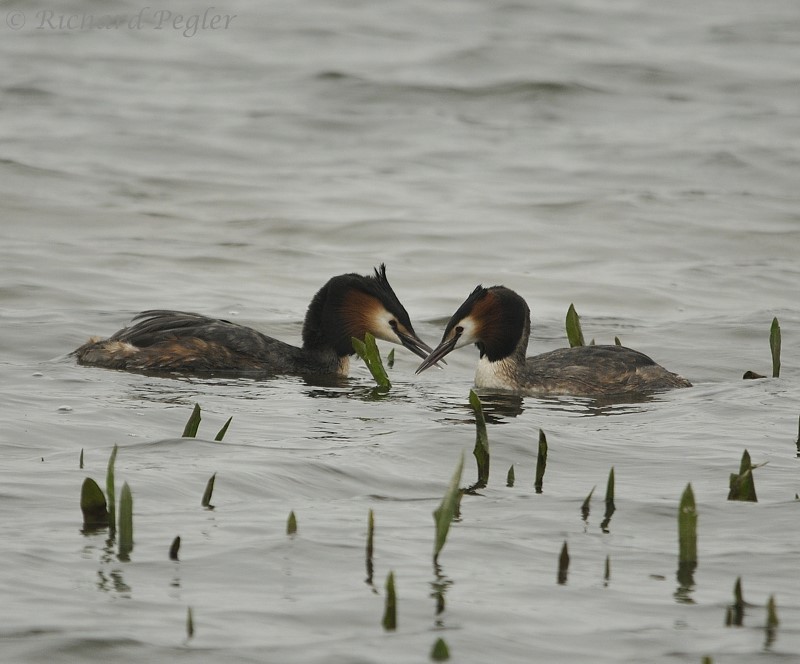 A quick return to Waderscrape Hide revealed just how much things have changed in front of the hide. Whilst 'waderscrape' has, for many years, been a complete misnomer for this hide, just three years ago it had three good-sized water channels radiating from the front of the hide. Until the winter of 2012/13 these were good for sightings of Water Rail and Grass Snake. In the summer of 2013 these channels had become almost totally choked with vegetation, and the Water Rails and Grass Snakes had disappeared.

Waderscrape hide now has three very broad channels in front of it, and Water Rails are present again and, for the first time, Water Voles are being seen on a frequent basis. It's now also possible to see water between the channels in some places.

When we arrived, a Grey Heron was in the reeds in front of the hide. For my overseas readers, I will point out that the Grey Heron is a very common bird in UK, but it is also a very nervous bird, and so not the easiest to photograph at close quarters. From the hide we had good views - between the reeds, and only at a distance of about 30 metres. In the second image, you can see that it had spotted something (us!). 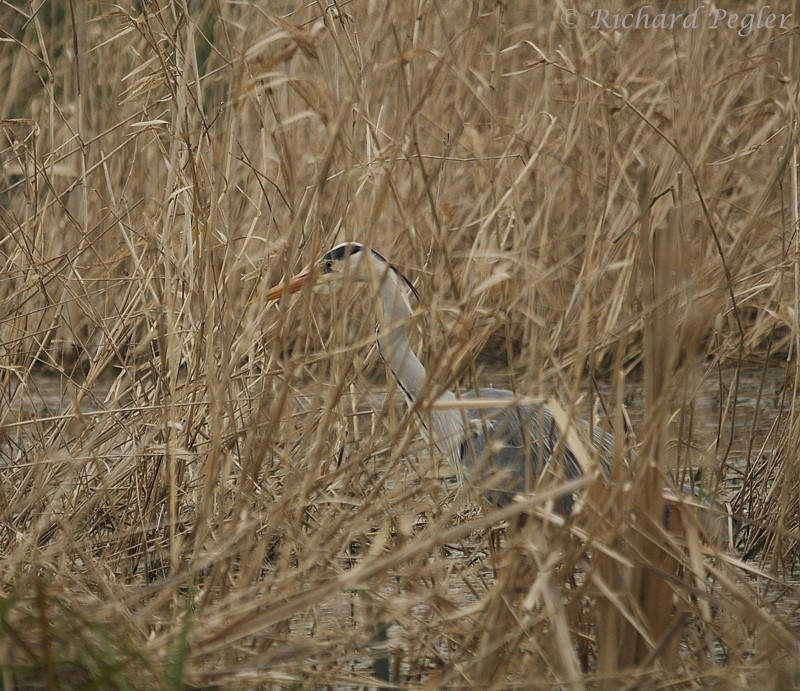 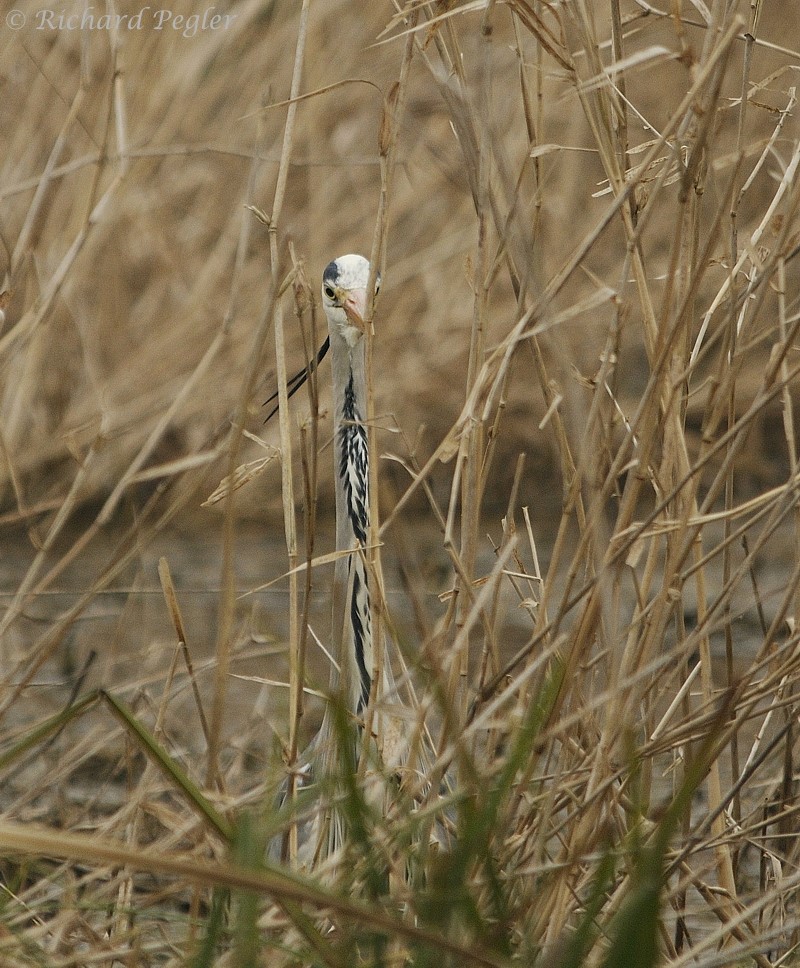 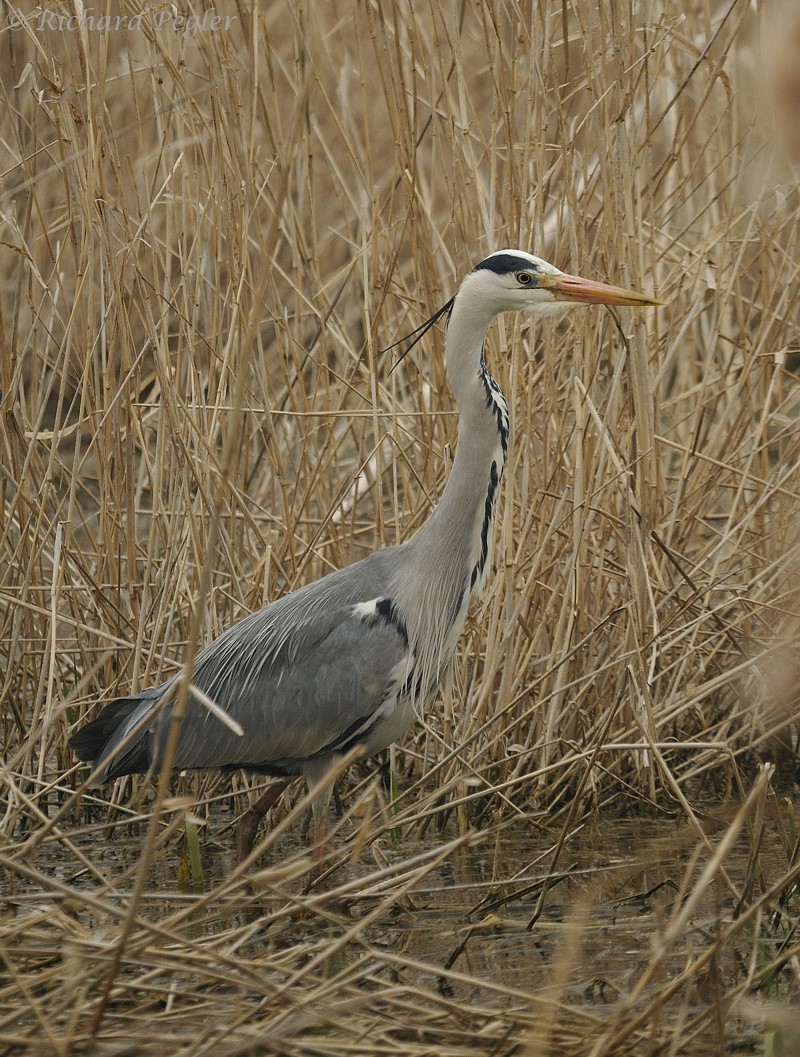 The smog really was quite bad, and many of my images in this post have had the colour intensity enhanced, and contrast increased, significantly! Here's one of the Osprey nest, which is at 250 metres distance, which has not been so enhanced - this is a very fair representation of what we were faced with!

The Water Rails were heard, but not seen, and the Water Voles put in several very brief appearances, but I really struggled to get any images. At one point I was sure that I'd got it cracked with 7 frames shot off in rapid succession with a vole only about 10 metres away. Sadly, my camera decided to malfunction (I still don't know how, but suspect an electrical disconnect between lens and body) and I ended up with 7 jet black images! This was the nearest to a Water Vole image that I managed to get that evening - but I'm hoping for plenty more opportunities over the next five months!

There is a webcam overlooking the Osprey nest in Manton Bay, and you can watch the action when there are birds on the nest by visiting the project's web site (see beginning of this post). I take my tablet with me these days, and I am able to view the camera output whilst I am in the hide (sorry, this facility is not available to the general public outside of the 09:00 to 17:00 time-slot, and then only on the project's tablet). This is a great aid to seeing what is going on when visibility conditions are poor (such as on this day). Sadly, the Manton Bay female only spent a few seconds on the nest during the whole three hours that we were there. Frustratingly she spent most of the time perched on the camera post (behind the camera!). I only managed to grab six frames during that time, a couple of which are shown below. 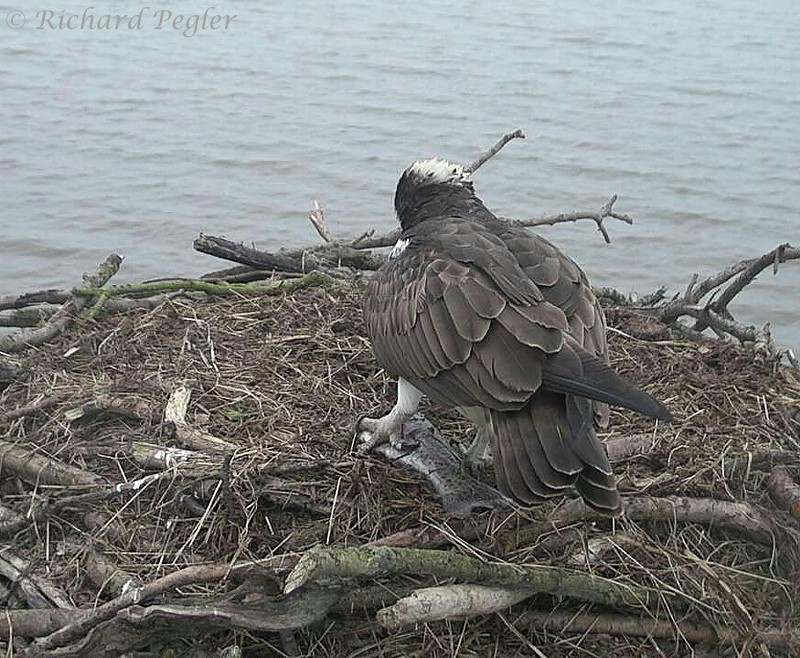 I'm sorry to say that male Osprey 5R didn't return during our shift, and has still not returned as I write this, and his eventual return is now somewhat unlikely. However, all is not lost as the Manton Bay female also seems to have given up on 5R's return and has taken up with male Osprey 28 (fledged from Rutland Water in 2010 - she's found herself a toy-boy!), so it seems that there will be a breeding pair in Manton Bay anyway.

Another bit of news is that, whilst at Rutland Water the official line is that we don't like to anthropomorphise our birds by giving them names, but always refer to them by their ring (band) No., it has been found to be very cumbersome to keep referring to "the unringed Manton Bay Female" so, as from yesterday, it's been decided that, from now on she'll known as "Maya" (first two letters of Manton, and last two letters of Bay reversed). Phew - that's a relief!

When we left the hide it was too dark to see the Osprey and we had an uneventful journey home. It had been a very enjoyable evening in spite of the smog, but tinged with worry about 5R. However, with the current set up, and 28(10) now in attendance with Maya, we can look forward to a very enjoyable 2014 Osprey season. Please come along some time and see for yourself, and if I'm around be sure to come and say hello.
Posted by Richard Pegler at 20:58