My wonderful wife, Lindsay, bought me a new camera as a present - not for Christmas (she gave me a couple of great books on dragonflies for Christmas), but as an early (six months early!) 70th birthday present. Her logic was a confidence-inspiring - "well you might as well have it now whilst you are still able to get full use out of it"!

The camera she bought me was a Nikon D7200. I'd been waiting for years for a 'pro' replacement for the Nikon D300s, of which I own two. However, it became apparent that Nikon had no intentions of bringing out a replacement anytime soon. My main reason for wanting an upgrade was that the 12.3 Megapixels and high ISO performance of the D300s is now greatly outstripped by more modern cameras. The D7200 offers 24.2 Megapixels and a significantly superior high ISO performance.

My D7200 arrived from Dale Photographic on Wednesday 9th December. By the time I'd got a battery charged and skipped through the relevant parts of the manual it was Wednesday evening. My usual Sigma 50-500 lens was stuck on the front - and the Optical Stabilisation didn't function! Most of that evening and the following evening (I was out all day on the Thursday) was spent trying to get to the root of the problem. The image stabilisation didn't work properly on any of my lenses with the D7200, but they did work on pal John's D810 which has the same processor at its core.

The suppliers were perplexed by the issue, but offered to to sort it out for me if I got the lens and camera to them.  Nikon were less than helpful, registering my query as a problem with a Nikon lens (that I'd not used for around four years). Sigma were extremely helpful, and suggested that there was the possibility that the problem could be fixed with a firmware upgrade to the lens - I'd never considered that the lens would have a processor which used updateable firmware!

It was Monday 14th before I had the confidence that my best option was to take up Sigma's offer of a free upgrade to the firmware in the lens. The lens was posted via Royal Mail's Special Delivery, insured and guaranteed delivery by 13h00 the following day. By 14h00 the following day it had become apparent that Royal Mail had lost my lens. It took a further hour or so to find someone at Royal Mail who would take ownership of my problem - and they managed to find my lens (still at my local Sorting Office, apparently) and get it on its way.

Sigma were marvellous! They received my lens at around mid-day on the Wednesday and it was on its way back to me mid-morning the next day, arriving before mid-day on the Friday (18th Dec.). The OS on the lens was checked on the D7200, and all seemed OK.  Now I needed to see what the new camera was capable of!

Pre-Christmas commitments and evil weather meant that opportunities were severely limited. What little photography I did indulge in was in extremely poor light conditions, but did serve to prove that the camera had capabilities way-beyond that of the D300s. However, nothing resulted that I would care to reproduce here.

It was Wednesday 23rd before we had a day of sunny weather and I had a free day. I started with a walk on my local patch, but only found an owl at my Site No.02. It was high up on the chimney stack, with strong sun on one side. At this distance and in these light conditions, my old camera would have given me somewhat less detail and probably bad 'flare' on the paler parts in the sun. This heavy crop is only about 17% of the original frame.

This next shot, at my LO Site No.51, was taken under even more difficult circumstances.  The wind was blowing me about, and I was at just over 50 metres distance. With the bird mostly in deep shade, but with dappled light coming through in places, I probably would have totally failed with the D300s. This is a crop to only 9% of the original image!

I didn't manage to find any more Little Owls, which was not surprising as it was so windy, so I decided to set off back towards home and visit my Short-eared Owl site. It's all very well taking shots of static birds, but one of the reasons for wanting the new camera was the ability to wind the ISO up so that I could attain faster shutter speeds for flight shots.

I arrived to find that the owl was already out. It stayed around for about forty minutes, and kept its distance for most of the time. It did come closer on a few occasions, but never really close. However, I did manage to get some shots that gave me the confidence that this new camera was going to be a real treat! I found that, even when it clouded over, I was able to carry on shooting. I got the impression that the camera had greater difficulty finding initial focus (that could easily be my inexperience with the camera), but that, having found focus, it held it more accurately on a moving subject (particularly when obstructions got in the way). I also found that the effects of changing background light were less drastic than I was used to.

Here's a few from that session, including the header image whilst this post is current. 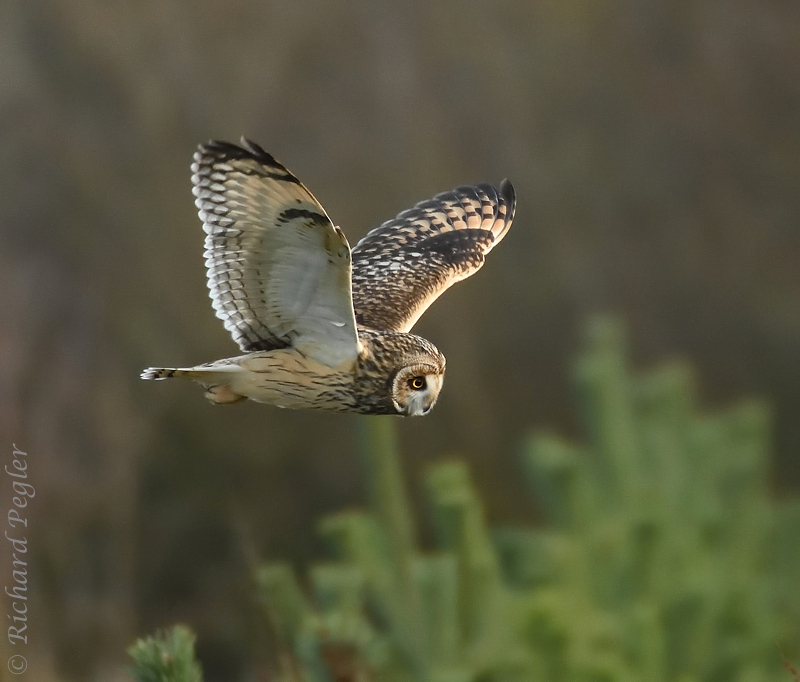 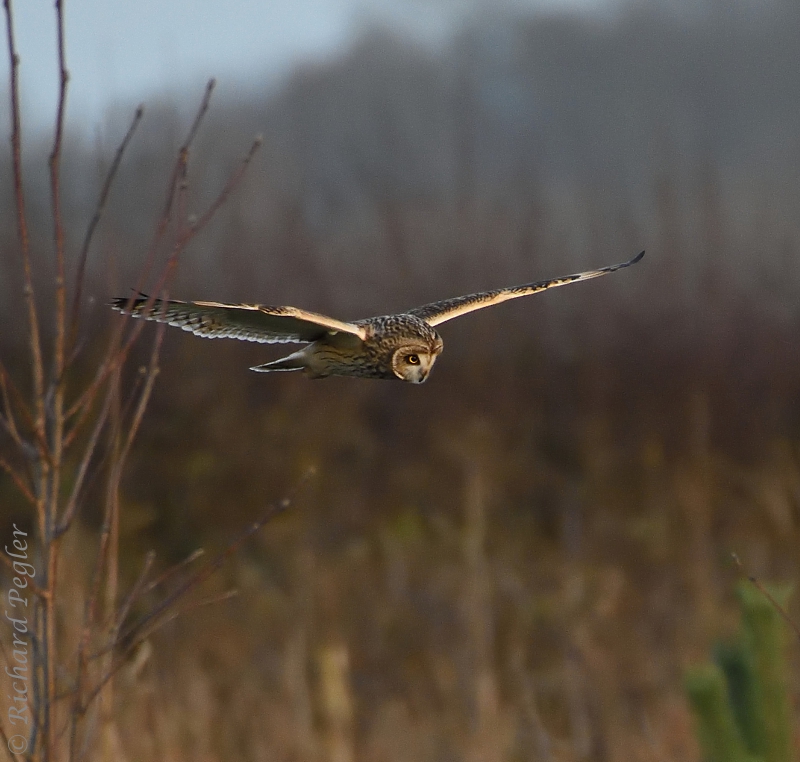 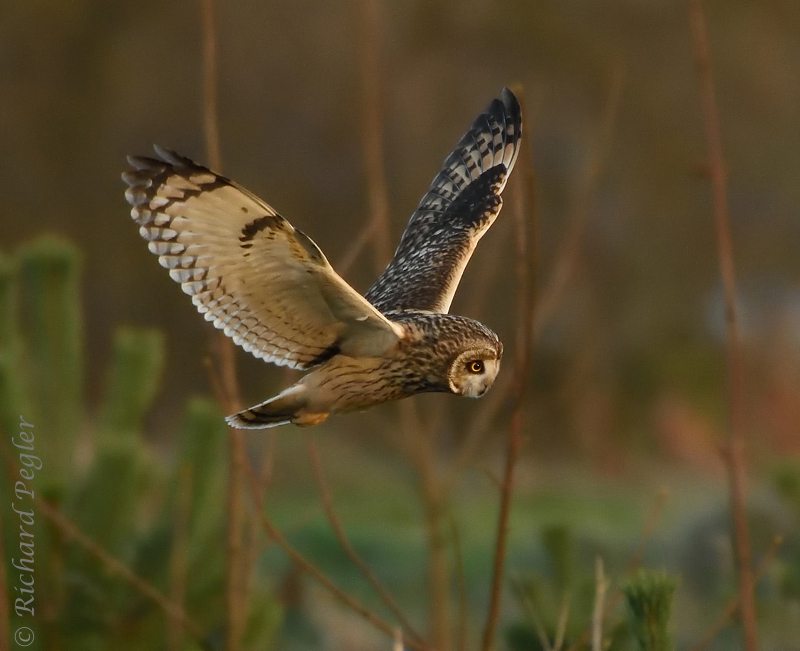 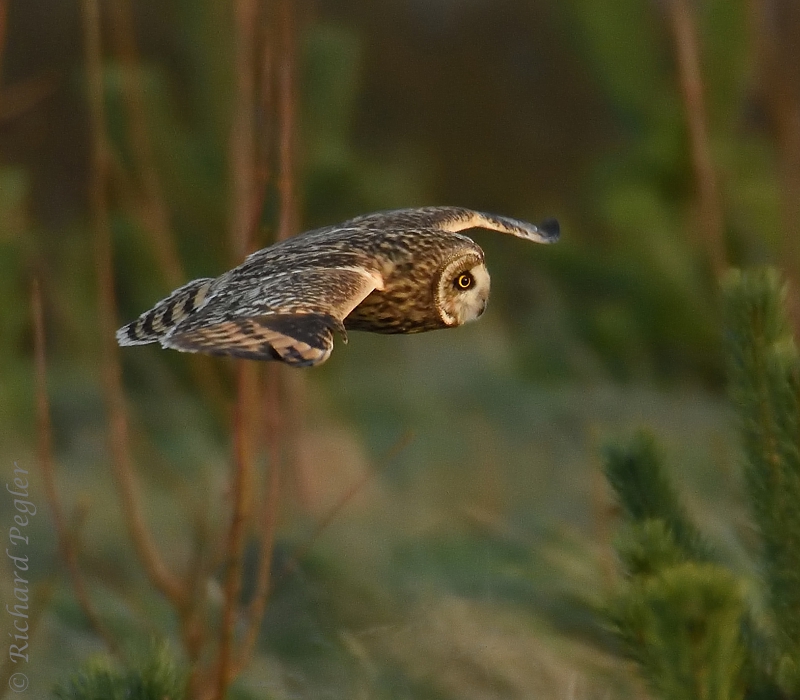 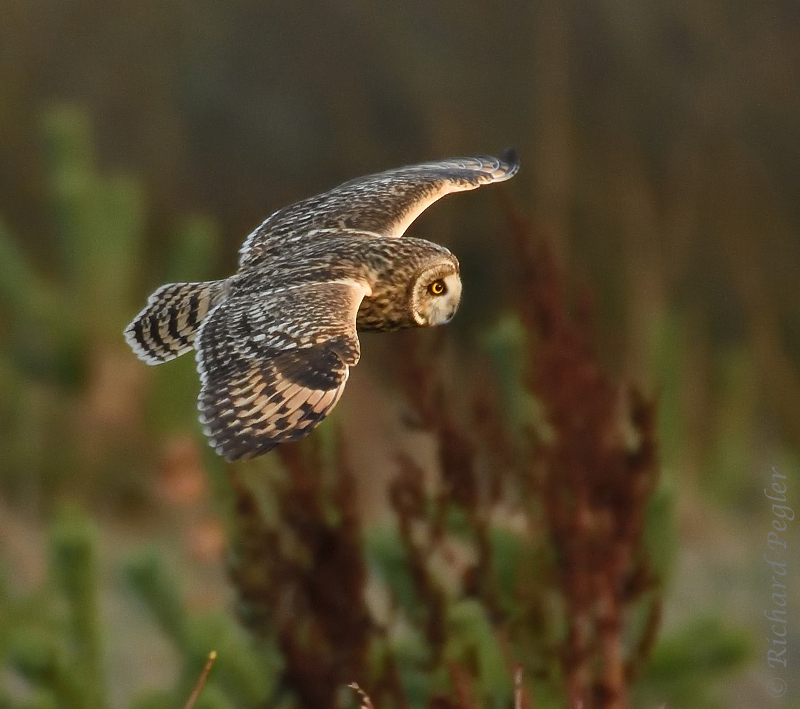 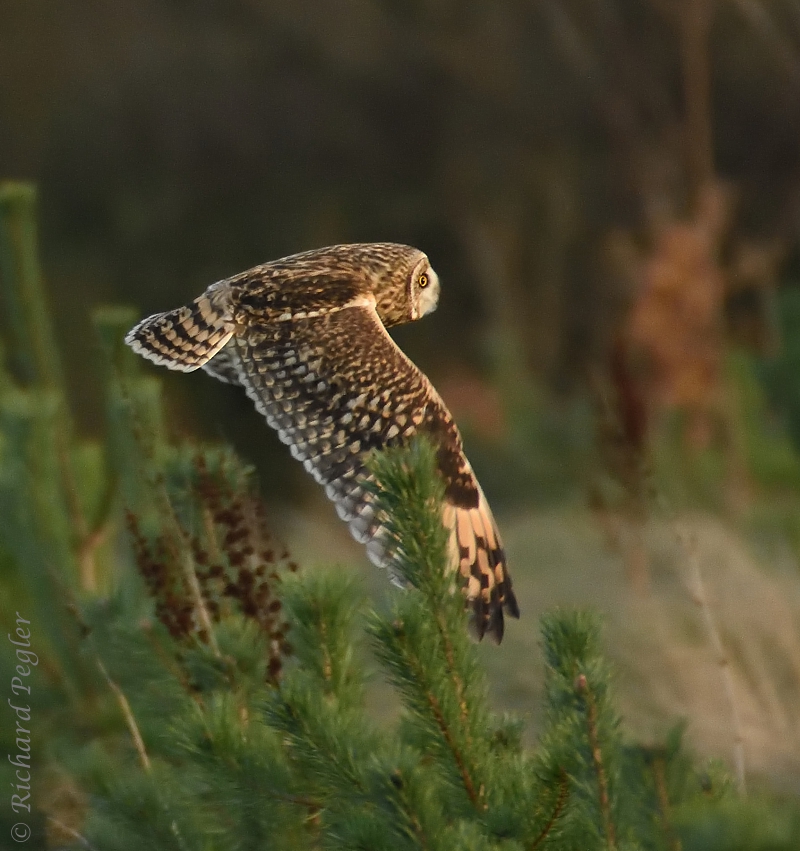 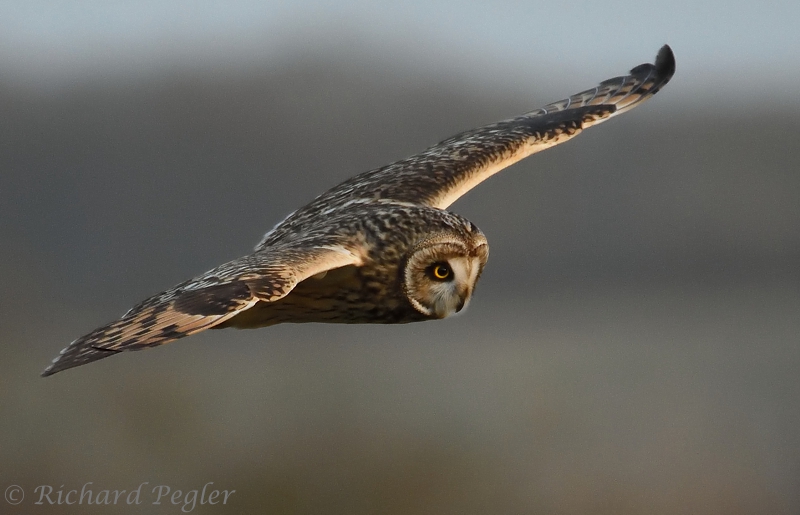 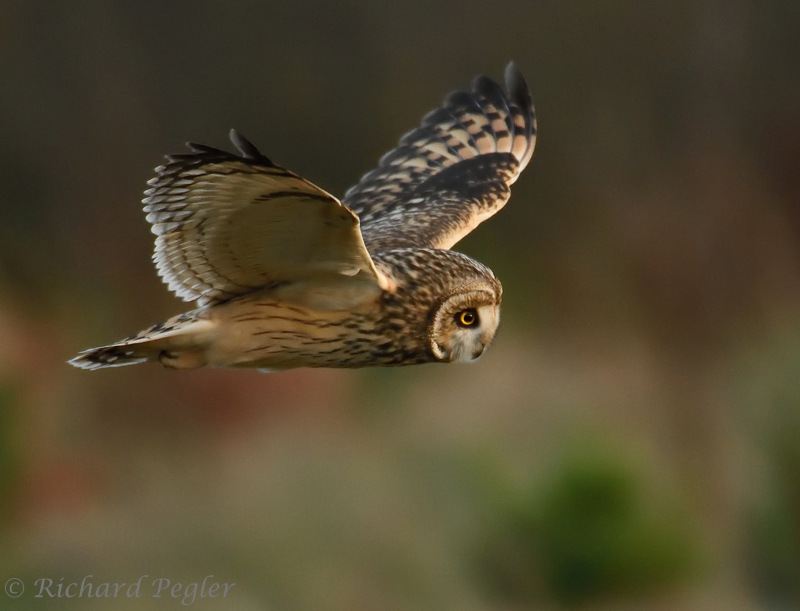 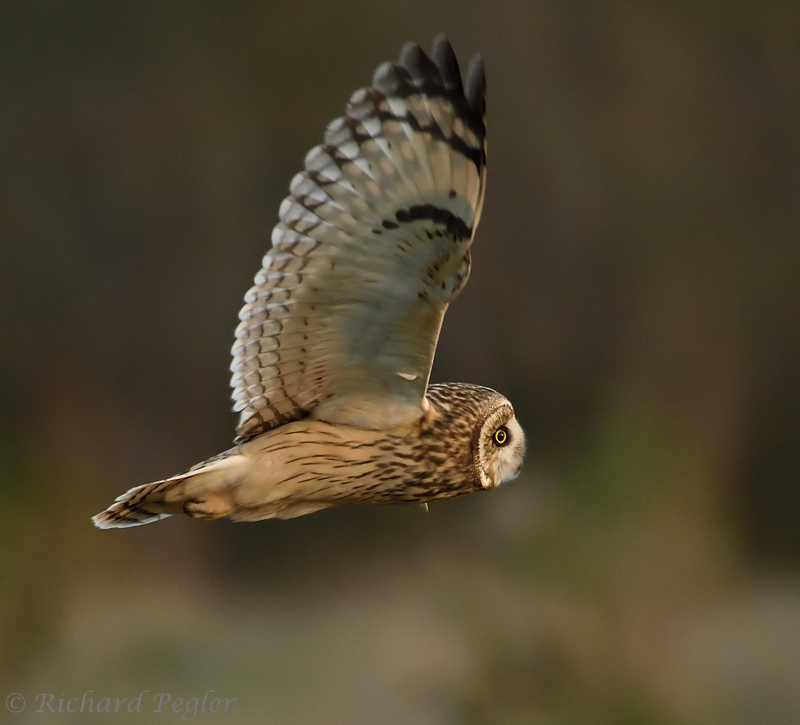 Although these might not be perfect results, I'm more than satisfied with them for a first attempt with the new camera. I can't wait for summer when, hopefully, I'll get the opportunity to try it in macro mode. Thank you, Lindsay, for a wonderful present. You're an absolute star, and the light of my life!

I'm not sure about the next post, but I really should take a break from showing Shorties. Perhaps the next one will convince you that I've become a bit of a bug-er?

Thank you for dropping by. I hope you had a great Christmas, and I wish you a happy and healthy wildlife-filled 2016.