One of my targets this year was to try and find the elusive Hairy Dragonfly. I'd seen one briefly at Rutland Water last year and only managed some distant images. When I saw, in the current Dragonfly News (the magazine of The British Dragonfly Society), that there was to be a visit to a private woodland, only some 10 miles (16 km) from me, in order to survey for the presence of Hairy Dragonfly I was immediately interested. I contacted the organiser of the visit, Peter Reeve, and managed to get myself a place on the visit.

Alvecote Wood is owned and managed by Sarah Walters and Stephen Briggs. I'll not say much about this wonderful place other than it won the Best Small Woodland in England award from The Royal Forestry Society in 2014. I do, however, suggest you read more by visiting their website at http://www.alvecotewood.co.uk. In 2015, Hairy Dragonfly were seen here, and we were there to look for evidence of them breeding here.

I arrived a little early for the stated (very civilised) meeting time of 10h30, and was greeted by Peter, Sarah and Stephen. By the time we had assembled I think that there were probably 8 of us (I didn't count) plus our hosts. After a short introduction covering the history of the wood, and the work that was being done there, we started looking at a couple of nearby ponds.

It was interesting to see a large swarm of bees gathering in a nearby tree, but they didn't bother us, although we got the feeling that we were being investigated from time to time. The dark out-of-focus mass in the centre of the second image is the core of the swarm. 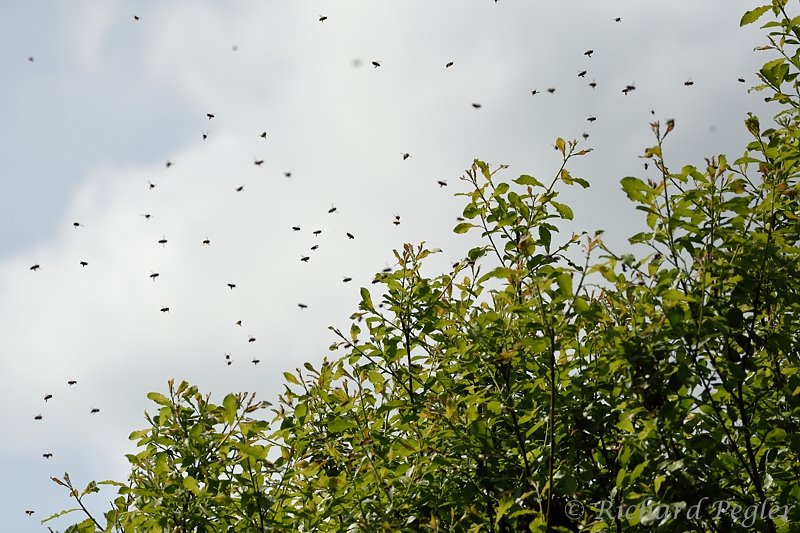 In the ponds near the entrance we found Large Red Damselfly, some of which were ovipositing.

After a little while here, we made our way to the ponds which are in the recently created Betty's Wood. Almost instantly on arrival, Hairy Dragonfly was seen! In the area, Four-spotted Chaser were emerging in some numbers, and Azure Damselflies & Blue-tailed Damselflies were also seen, although I didn't attempt to photograph these. Also present, of course, were many more Large Red Damselflies.

It was not easy to photograph the full emergence of the Four-spotted Chasers as we all wanted a turn at viewing the proceedings, so my collection of images is more than a little disjointed! Here's a couple of images of them just after the dragonfly has burst its head, thorax, and legs out of the casing and is hanging down until things dry out enough for it to use its legs to hang onto a stalk. I think that these are probably of the same dragonfly. 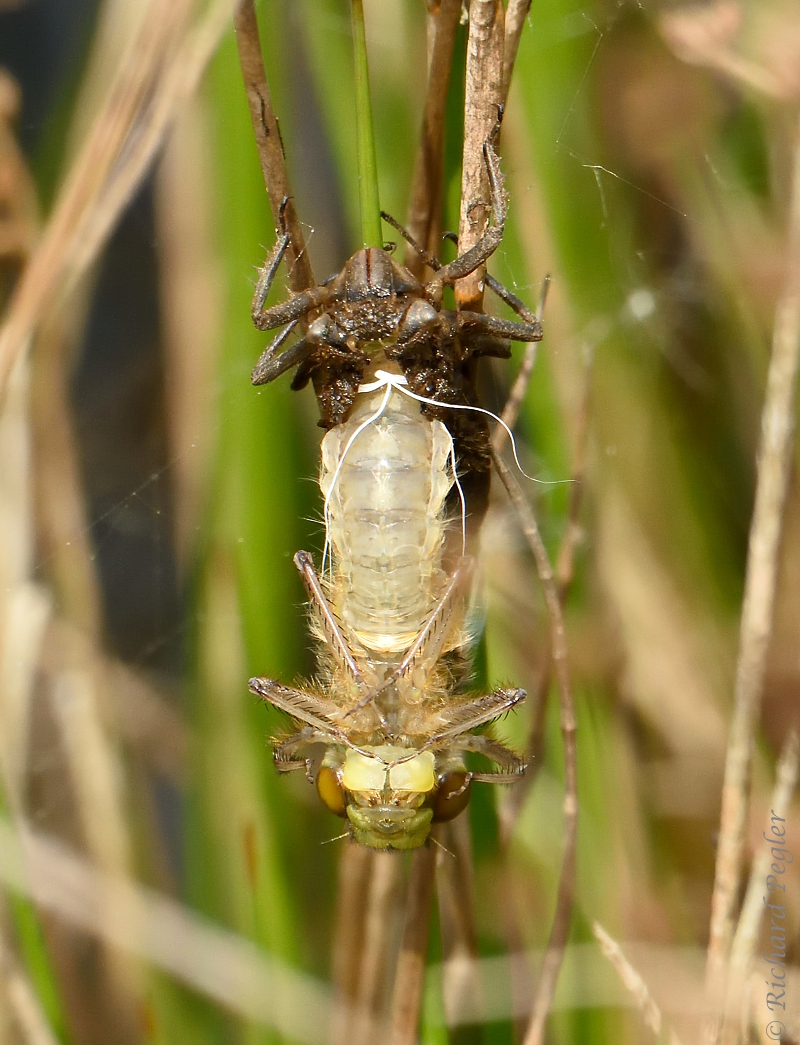 Here, one has got its wings out but they are not yet fully pumped up and dried.

In the next image the wings are nearly ready for use, although still folded.

This next one has opened its wings. It has not yet got much colouration in the body, and the wings are still somewhat wrinkled.

These next two are ready for flight, although there's still some wrinkling in the wings. 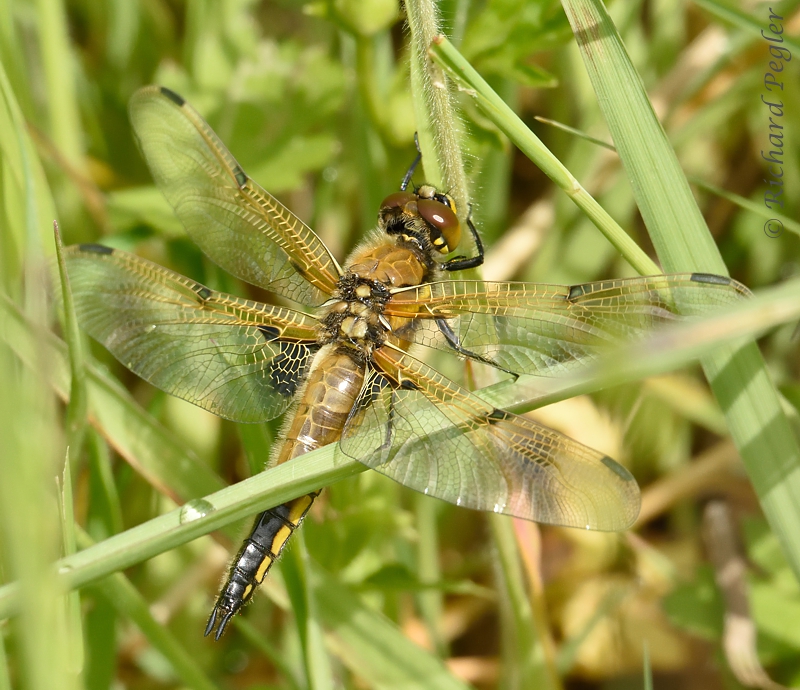 This one has made its first flight.

The Large Red Damselflies were busy ovipositing here too. In these next two the female is, I believe of the form 'fulvipes', with less black on the abdomen. Most of the ones I saw were of this form. 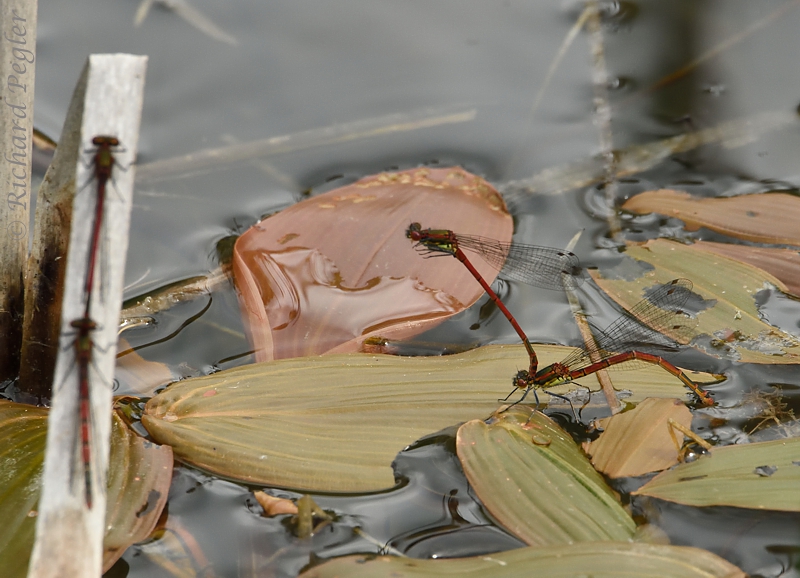 In this next one, however, the female seems to be of the form 'typica' - and a teneral?

This next one is a teneral female.

As the main objective of the visit was to check the site for evidence of Hairy Dragonfly breeding there, the initial focus was in looking for exuvia of that species. This was soon found. Now I know nothing about exuvia identification so it is possible that this first image is of a different species, although I don't think so. I should have made notes!


These next two images are of a different exuvia to the one above - the first with the exuvia in situ, and the second after it had been harvested by one of our number, using an ingenious home-made gadget with a long pole! 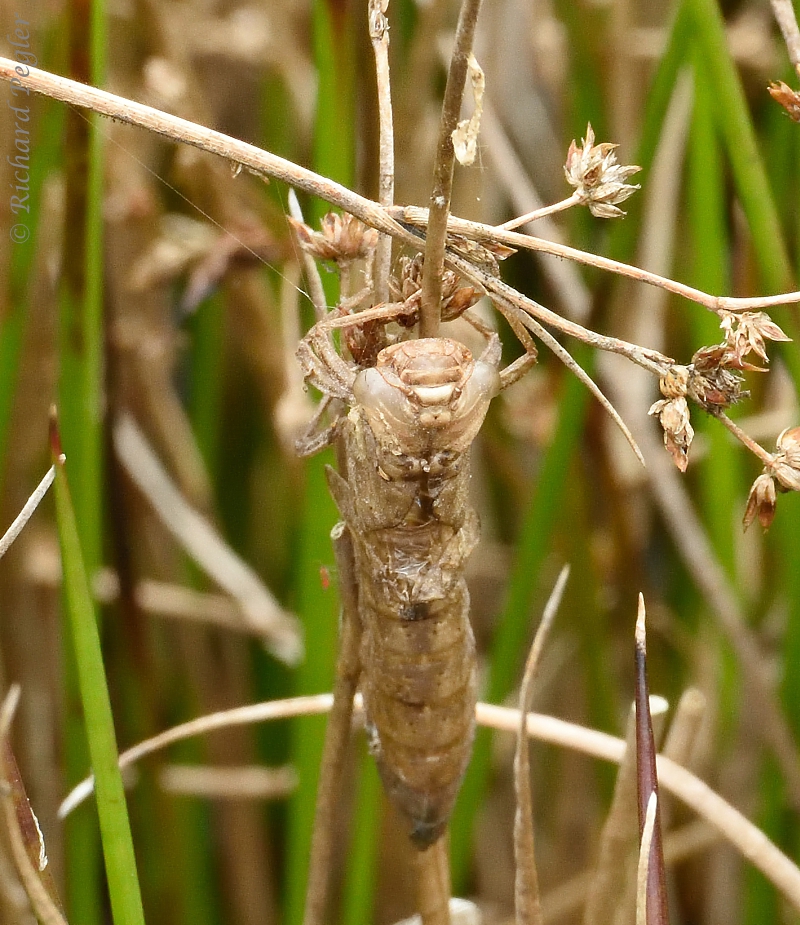 Sadly, I did not see a Hairy Dragonfly settled at any time, which was more than a little frustrating from a photographic point of view. I did spend half an hour or so trying to get some shots of one in flight, but didn't have any real success as they were flying fast and unpredictably. This is the nearest I got to obtaining a reasonable image. I wouldn't normally have cropped this one so tightly, but the right hand side of the image is right on the edge of the frame - in other words, I nearly missed it completely!!!

After around three hours,  we wandered back to the entrance, seeing that the bee swarm had totally dispersed.  I'd had a marvellous time and learned a lot, even if the photographic opportunities were not quite as good as hoped for on that occasion.

I'd like to thank Peter Reeve for arranging this splendid visit, and for his help and advice during the visit.

My thanks to Sarah and Stephen for being the perfect hosts. I'm extremely impressed by their passion for their wonderful nature reserve, the hard work that they put into it, and the fabulous results that they are achieving. I hope to be returning soon.

This visit gave me the confidence and inspiration to go out the next day to seek the legendary White-faced Darter - more about this in a future post!

Thank you for dropping by.
Posted by Richard Pegler at 09:22