I'd had a call from pal John to say that he was having to take his wife to the dentist for emergency treatment, and wouldn't be able to make our usual Thursday afternoon out together. I was unable to offer a switch to the following day due to a prior commitment, so went out solo for the afternoon.

It was a fine sunny day with no wind, so my intention was to seek out dragonflies at Rutland Water. I'd seen plenty of Migrant Hawkers there this season, but had not succeeded in photographing any females of the species - or even seeing many for that matter. The same could be said for Southern Hawkers, but they seemed to have become a bit thin on the ground lately so I was not over-hopeful on that score.

I took the usual 'owling route' to Rutland Water, seeing single owls at two different sites (probably to feature in a future post). After checking in at the Egleton Birdwatching Centre, I set off northwards. The path, initially, takes a bit of a zig-zag route, and there are two places where there is a sharp turn left, with views over the meadows on the outside of the corner. There were several distant Migrant Hawkers seen in flight at both these locations, and also one male at the second corner which briefly settled on the hedge the other side of the gate, but flew and vanished before I could get a photo. There were, however, several Common Darters present which had a tendency to sun themselves on the top of the gate, as can be seen in the header to this post whilst the post is current, and in the following images. 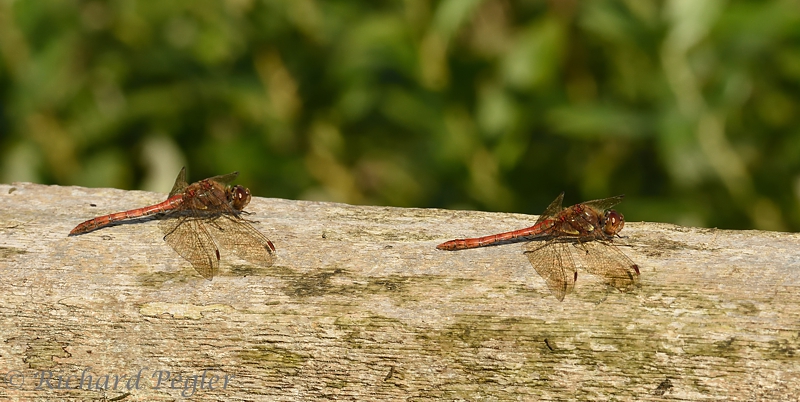 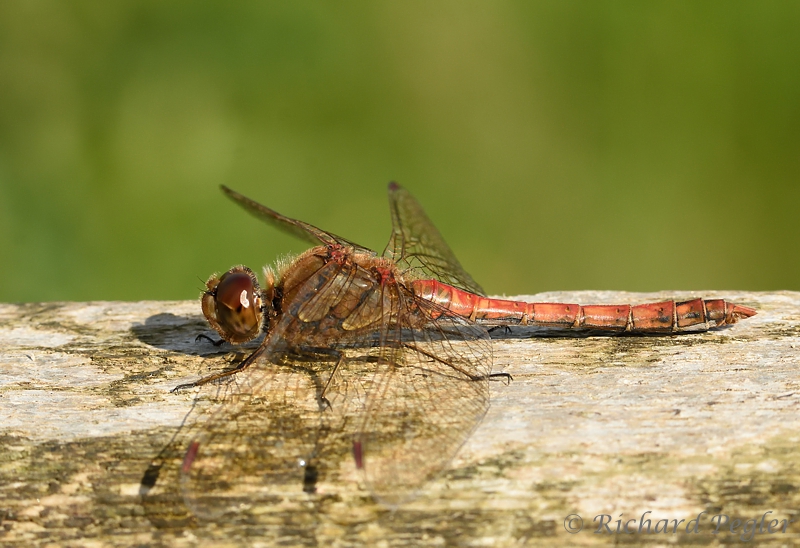 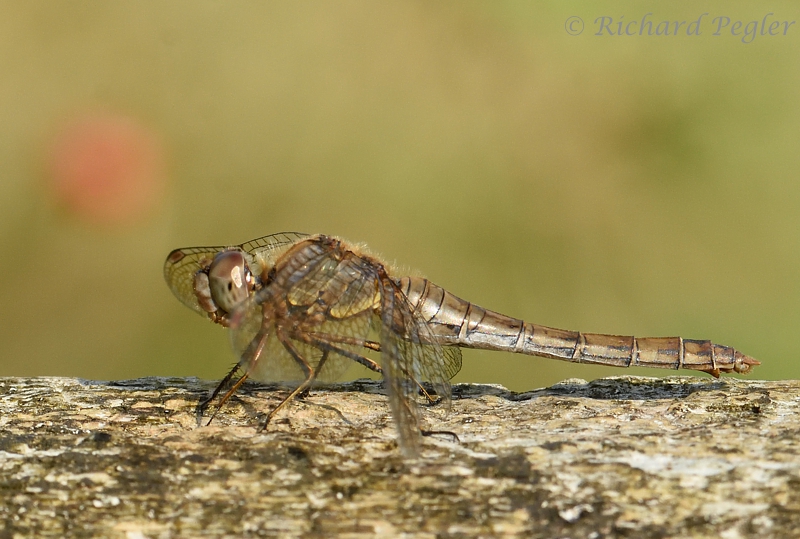 I paid a brief visit to Redshank Hide and then took the 'summer path' which runs to Grebe Hide and Osprey Hide. In the past, this path has been good for dragonflies and damselflies, but the sun was only on it in a few places and no dragons were seen. I did call in briefly at Grebe hide, and Osprey hide was closed whilst a new 'all access' ramp was being put in.

At this point the main 'all seasons' path is rejoined, and one passes through a gate near the south-east corner of Lagoon 4. To the right of the gate is a small '3-4-5' (think back to maths in your school days!) triangular meadow with hedges against the two shorter sides. The longer of the two short sides ('4'!) was in full sun, and there were columns of midges over the meadow with a few Migrant Hawkers dodging in and out of the midge swarms picking them off.  I was unable, however, to get into a position to take a photo. Fortunately, one did briefly land on the hedge, but my camera settings were not appropriate, as I'd been trying for the flight shot, and the images are less than crisp.

There were three or four Common Blue Damselflies around. I didn't take much notice of them, but did take some shots of the female of the species.

I gave up on the dragons at this spot after about an hour, and dipped into Shoveler Hide, where there was a Great White Egret in the water on the far side of the bar, and a Green Sandpiper at the end of the bar (future post!). The egret departing to the right caused me to check out Buzzard Hide in the hope of re-locating it, but it had, apparently, turned back.

On my way back to Shoveler Hide, a sighting of another Migrant Hawker came to nothing, but this female Common Darter was, unusually, hanging vertically on the fence. The second image is there because it shows how the head is roughly 'mushroom' shaped and concave at the back, with the neck being quite long. 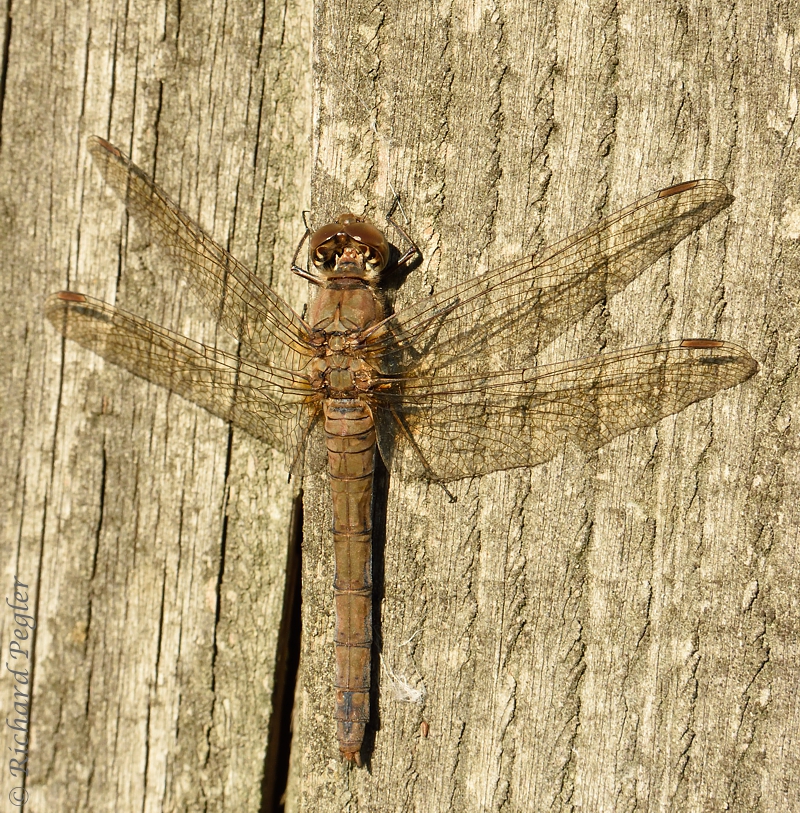 Back in Shoveler hide, I watched the GWE for a while and then set back to the hedge at the edge of the triangular meadow. The situation had changed somewhat, and the Hawkers were landing. At first I was just seeing males, including a pair together. Unfortunately, every landing point had a very fussy background immediately behind it, so I'm less than happy with the images. The left hand one, in this shot of the pair, had the tail-end of its abdomen curled downwards 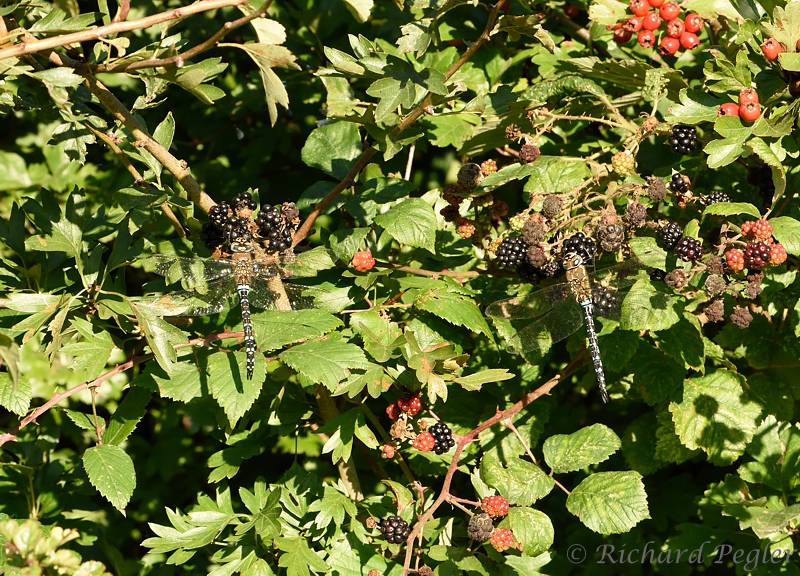 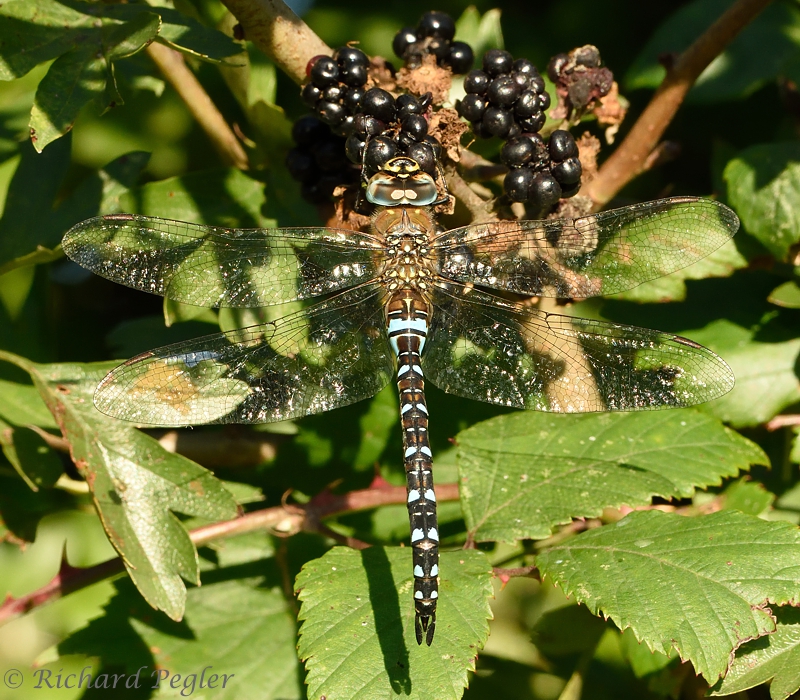 I then noted a female Migrant Hawker flying near the hedge at the far end and managed to keep it in sight until it landed - my first female mixta images of the year! You can see from the first image, below, that the females are not quite as easy to spot as the males are when landed. 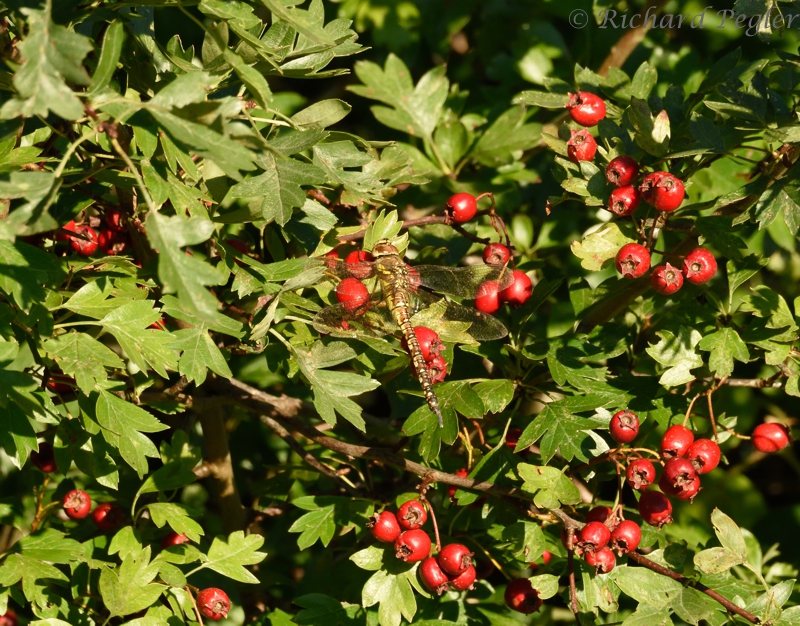 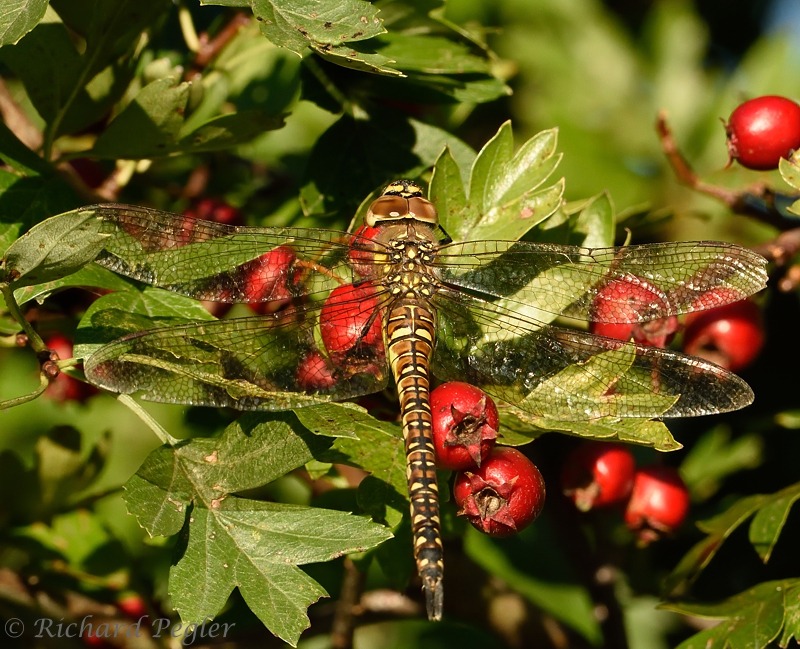 I then spotted a second female. 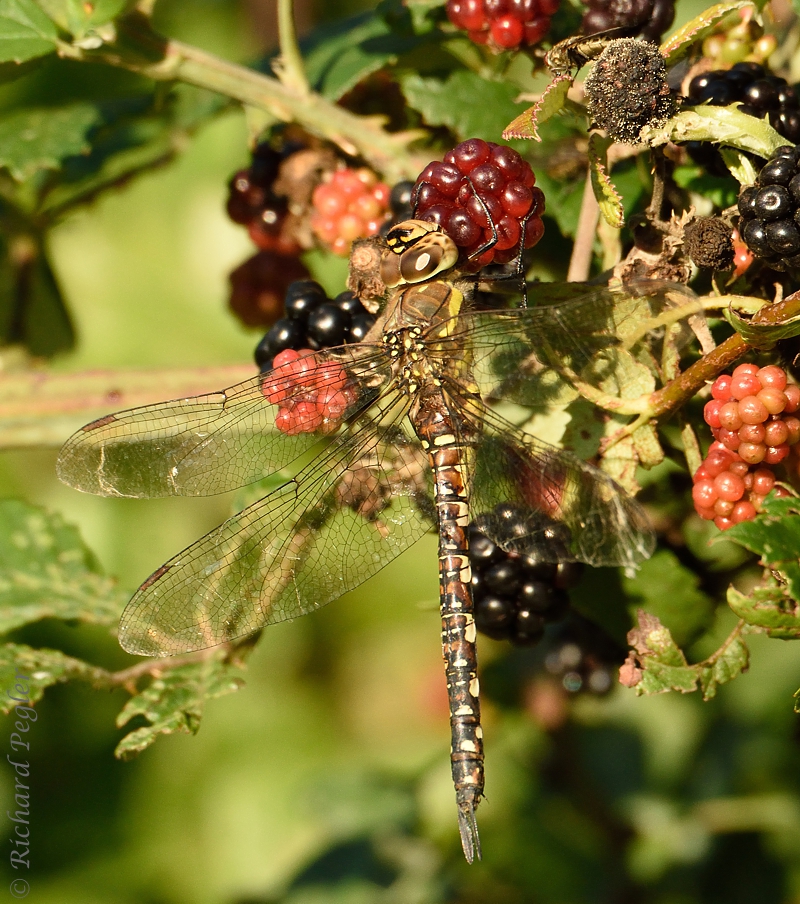 I'd spent around another hour here again, and it was time to go as there was a place that I wanted to stake out for owls at dusk. On my way back to the car, I stopped for some more obliging Common Darters. I reckon I probably saw two or three times as many Common Darters during the afternoon than I've ever seen in a similar period before and, for some reason, they wanted to land on my head!

I had a pleasant run back home, seeing two Little Owls, but not the Barn Owl I was hoping to see during my hour and a half stake-out, during which I had my picnic evening meal.

It had been a most enjoyable afternoon and evening, and I'll probably cover the non-dragon aspects in my next post!

Thank you for dropping by.
Posted by Richard Pegler at 19:11