I'll start by apologising to fellow bloggers for not visiting your blogs lately. I have been away on holiday in the Outer Hebrides where I had limited access to the internet, mainly due to my equipment rather than that of our base. I hope to start catching up on your blogs soon, but also have to start work on the well-over two and a half thousand frames I shot whilst away!

Just noticed a typo above - that should have been just over FIVE and a half thousand frames !!

So now to the subject of this blog post:-

I was booked to go on a visit to Chartley Moss, arranged by the British Dragonfly Society (BDS). Chartley Moss is one of the few floating moss bogs in the world and is managed by Natural England (NE). For reasons of safety and conservation, it is only visitable with organised groups and these are few and far between. My interest was that it is one of only three sites in England which have a population of White-faced Darter dragonfly.

I'd originally been booked on an afternoon visit but, because of demand, an additional morning visit was set up. As the weather forecast looked more reliable for the morning than it did for the afternoon, and as there was a space available I requested a transfer to the morning.

Chartley Moss is only 35 miles (56 km) from my home, it was easy to get to, and I arrived half an hour early. I'd been a bit concerned that there might be up to a dozen people on the walk and it might be a bit too crowded. I was, therefore, somewhat disappointed to learn that 25 people were booked! Everyone turned up, and so too did several other people that were booked for the afternoon walk but decided, unannounced, to turn up for the morning one instead.

Sadly, one of the party had limited mobility, and had to be propped up by a person on each arm. Dispensation was arranged for her party to drive to a farm which reduced her walking distance by about 300 metres. Here we picked her up again at the official entrance to the reserve at start of the walk which leads to the reserve (see the "You are here" marker on the below image).

There was then a level walk of about 350 metres along the route of a disused railway line to a point which, on the map shown above, is adjacent to the top of the pale bit enclosed by the darker green bit. When the main part of the group reached this point, it immediately became clear that the way forward, down a steep woodland slope, was going to be impossible for the lady lady with difficulties. We waited here for for about 10 minutes, and she was still some way off when it was decided that one of the two NE personnel should go back to her to reassess the situation. The main group continued.

It took a fair time to get to the target area of the bog, as we stopped from time to time to be given interesting information and demonstrations about the history and ecology of the bog. One of these demonstrations involved people jumping up and down, causing waves on the surface we were standing on and adjacent trees to sway from side to side quite dramatically!

As we got nearer to open water one of our number spotted a teneral male White-faced Darter in a tree some distance from the path that we dared not depart from!

We arrived at the water's edge, and found ourselves standing pretty-much shoulder-to-shoulder at the edge of the 'pond'. There was plenty of dragonfly activity - mainly from male White-faced Darters (WFD). We did have sighting of the occasional female WFD, and there were a few Four-spotted Chasers too.

I don't know what head I had put on when I'd got out of bed in the morning, but it certainly wasn't my photographic head! My images are virtually all very 'soft'. I suspect that I'd been over-ambitiously working with high aperture figures. Coupled with the difficulty in getting anywhere near the subject matter because of the number of people milling around and also the confinement to a narrow track for safety reasons, my results were very much less than satisfying. Here are a few of the better ones from an overall bad bunch:- 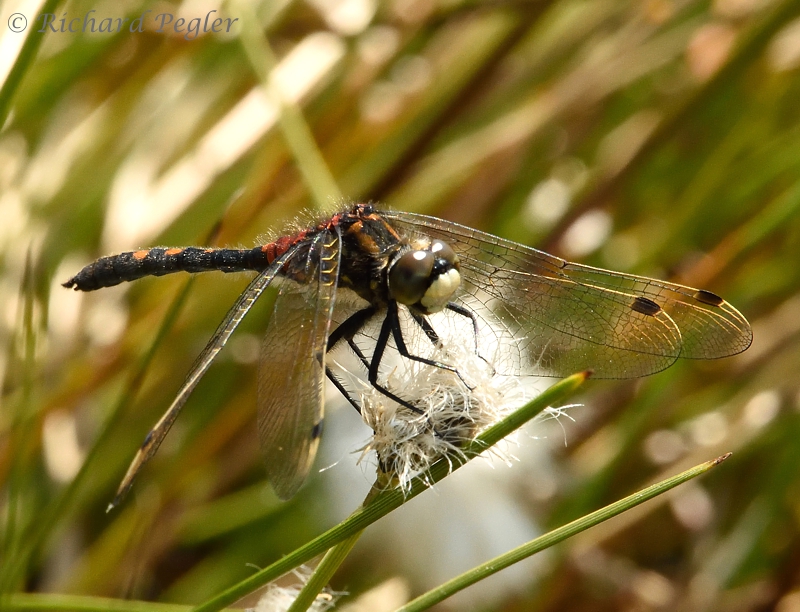 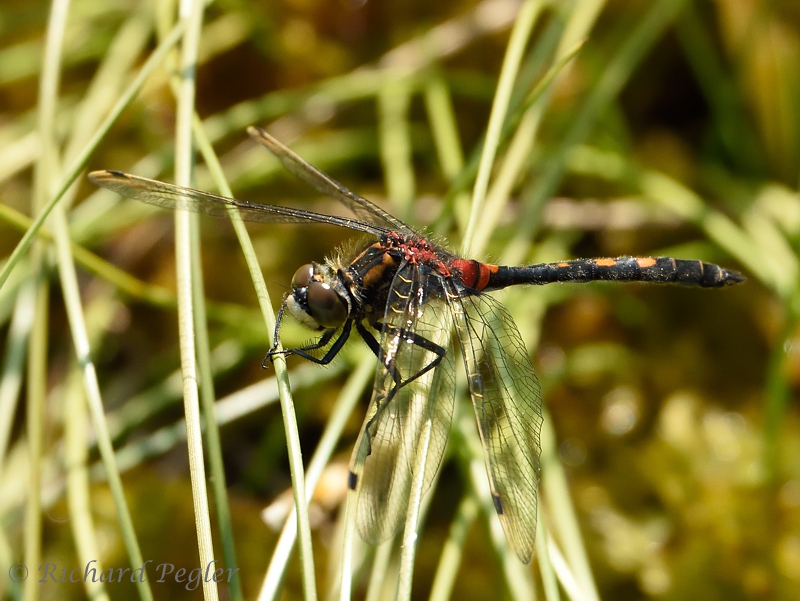 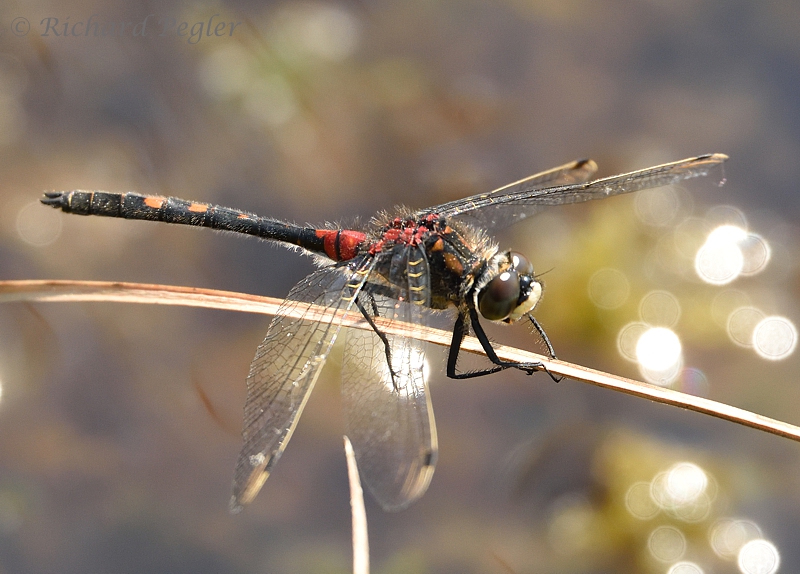 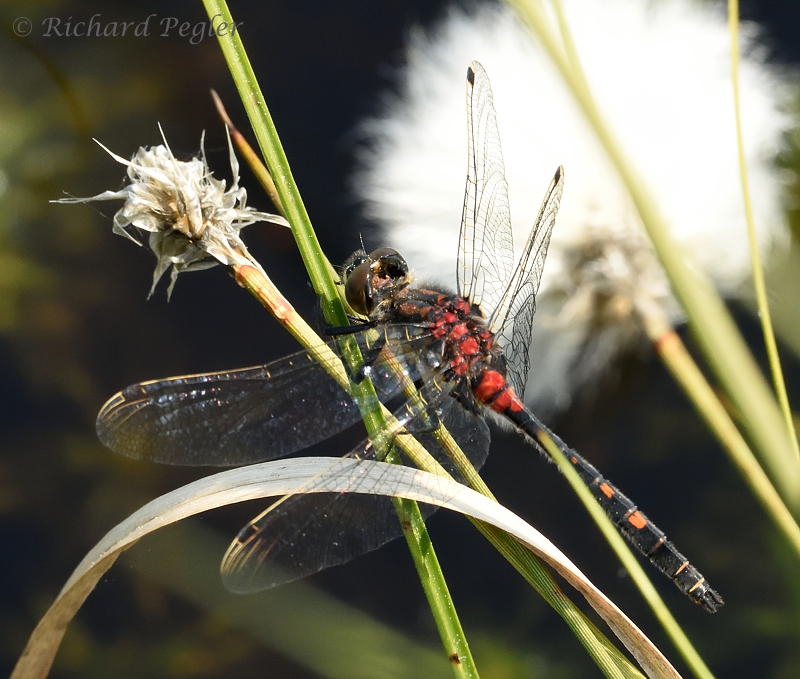 This next one was, I believe, my first ever shot of a mature female WFD that was not conjoined with a male! I failed to get a usable image of a female that was ovipositing.

I suspect that this emergent female, below, had run into trouble, as I was a bit surprised to see the wings in such a crumpled state, particularly as the abdomen had already taken on colour.

I would have expected those wings to be relatively flat, as in this freshly emerged specimen which, unfortunately, I was unable to stop and observe its development. Note its exuvia bottom-right.

I'm pleased to say that I did manage to collect a few exuviae at the end of the session after most people had already departed.

Once back at my car, I had a late picnic lunch and decided to call in at one of my regular odonata spots on the way home. During my previous visit, fifteen days earlier, I had seen absolutely nothing of interest. However, I was delighted to find plenty of Red-eyed Damselfly (although only two lily pads had so far appeared!), Azure Damselfly, and Large Red Damselfly. I also had a very brief passing sighting of either a Four-spotted Chaser or a Broad-bodied Chaser (probably the former).

It was great to see the Red-eyed Damselflies doing something other than sitting on lily pads or flying around when disturbed by other damselflies. Unfortunately as well as having the wrong head on my shoulders, as mentioned above, I found the light difficult as most of the time I was having to shoot straight into the sun, and I was constantly having to change exposure compensation, with values ranging from +1 to -1.7. Typically, in my experience, this species was rather 'nervous' and stayed distant 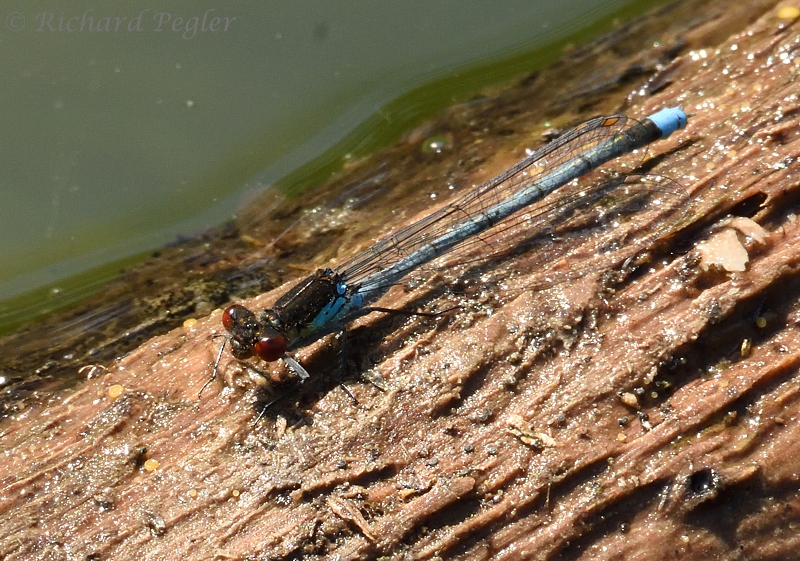 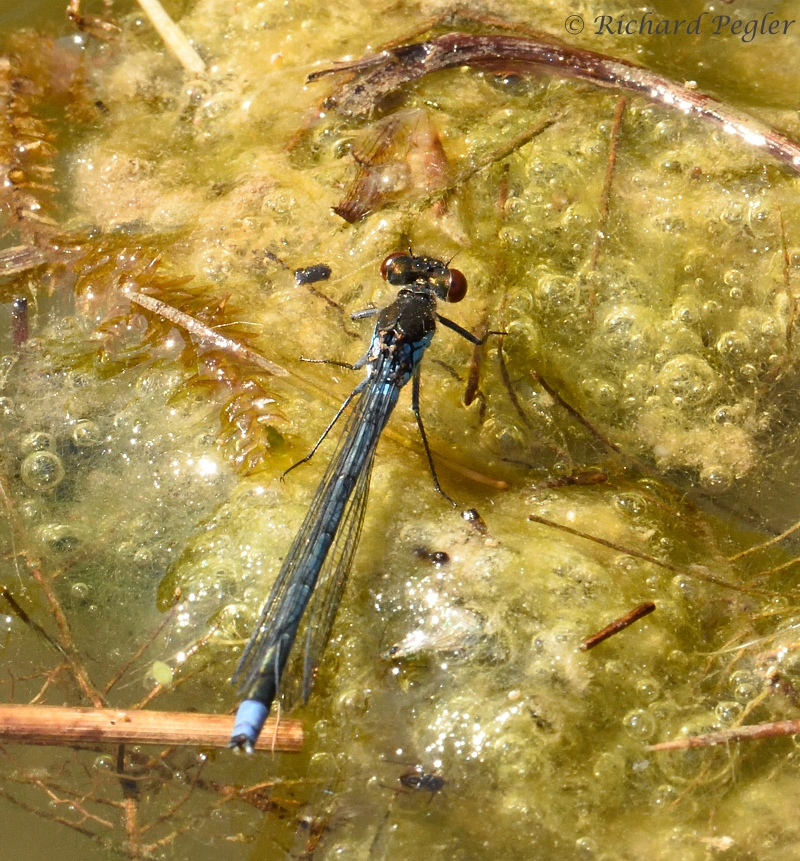 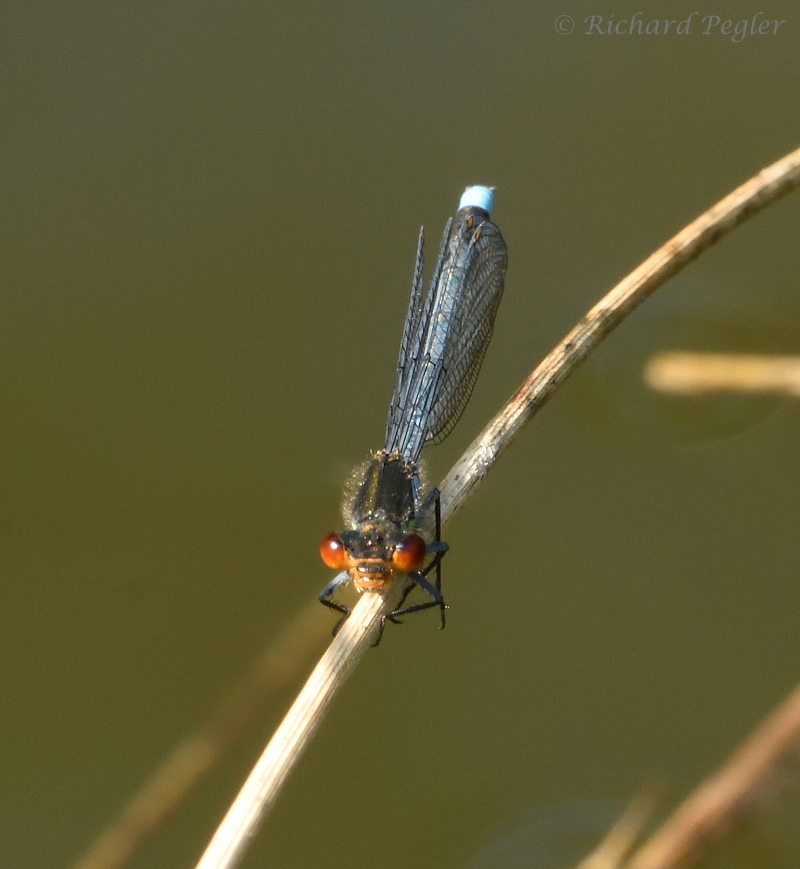 This was also, I believe, the first time I'd seen a female of the species - even if they were all coupled to males, mating or ovipositing. 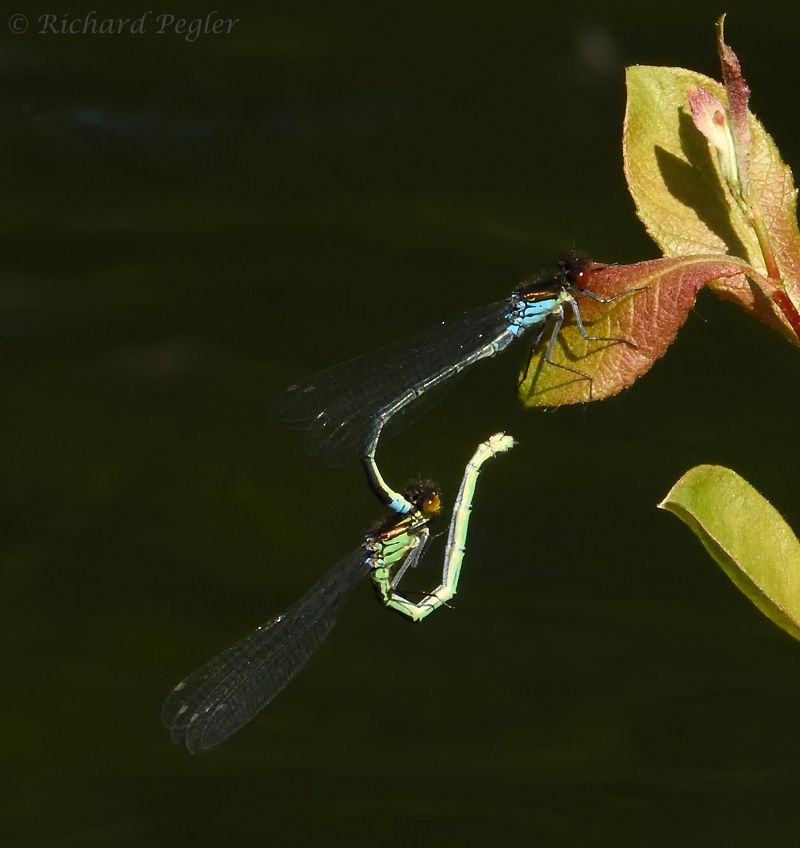 Here's a pair in tandem, probably prior to ovipositing.

I'd read about males of this species holding females under water for up to 30 minutes whilst ovipositing but never witnessed it. Whilst these do not show the female greatly submerged, it was interesting to see. 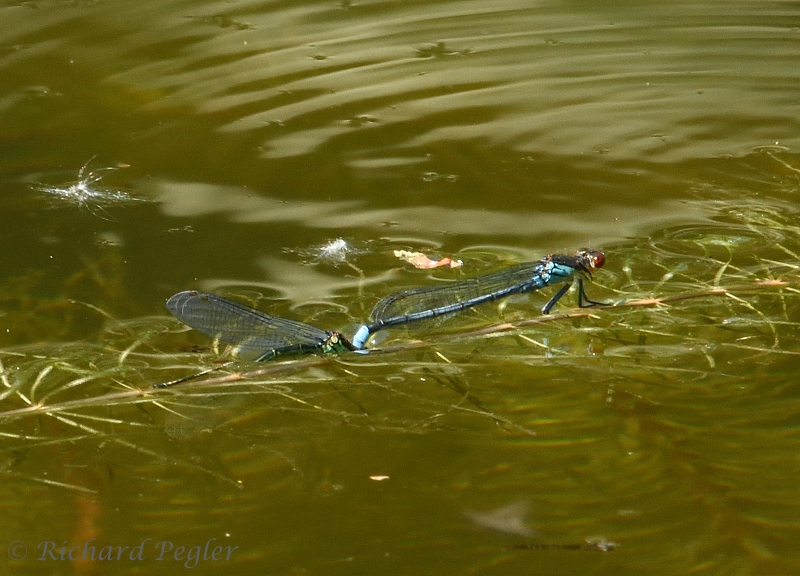 The Azure Damselflies were also busy, and a little more obliging for photography.

The Large Red Damselflies were even more confiding, and I did a little better with those than I did with any other species all day! 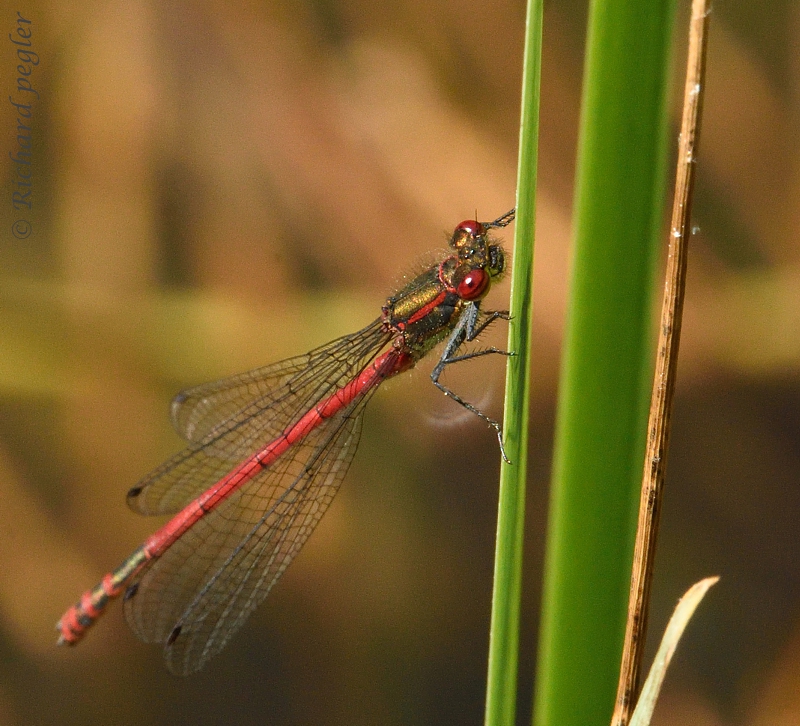 It was time to be heading homeward. I'd spent half the time at Ticknall Limeyards that I'd spent at Chartley Moss, but I'd taken twice the number of photos, in spite of seeing probably less than a tenth of the number of odonata seen at Chartley.

I will however, say that the visit to Chartley Moss was both interesting and worthwhile, even if I didn't get the hoped-for results, and I am very grateful to Ellie Colver of BDS and to Tim Coleshaw and Paul Shires from NE for the opportunity to visit this wonderful place.

My next post, hopefully in about a week's time, will cover my recent stay on the Outer Hebrides.