I'm way behind with everything after returning from the Outer Hebrides. It had not been helped by me again succumbing to a chest infection. I am now (reluctantly) once more on a course of antibiotics and awaiting the results of an x-ray. I have, however, used my forced incarceration to process all the photos from the Outer Hebrides, and shall shortly start to write a report on that visit. In the meantime, here is a post for which I'd processed all the photos before the Hebridean adventure, and (hopefully) will require little writing effort!

It had been a while since I'd been out anywhere, the weather forecast was good, and I felt a visit to Ketton Quarry coming on to see if the Grizzled and Dingy Skippers were about yet. This was the day to find out!

I was on a bit of a mission, so I took the quickest route, arriving at around 11h00. I made a brief circumnavigation of the level section which leads from the car park to the gate which opens onto the slope into the first part of the quarry, seeing nothing of great interest until just before the gate, where I spotted my first Cinnabar moth of the year. It was not very cooperative, and when it settled it did so rather untidily - but at least it showed its hind-wing.

I spent about an hour searching the area, but didn't find the hoped-for Dingy or Grizzled Skippers. Here are a few of my finds.

At around mid-day I returned to my car to have a quick picnic lunch, but spotted a Holly Blue just before I got there.

In less than half an hour I was back in the quarry, and things had changed somewhat! Almost immediately I saw a Small Heath butterfly which flew and drew my attention to a Common Blue butterfly which, in turn, disturbed a Grizzled Skipper! The Small Heath was exceedingly tatty, so does not appear here, and I lost the Common Blue when I was distracted by the skipper, so only got a poor shot. 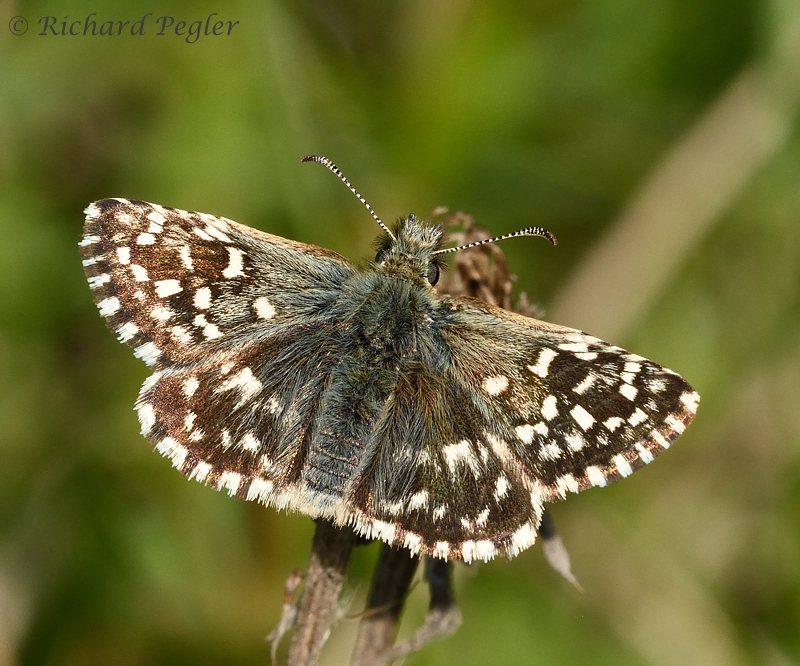 Shortly after this, two gentlemen arrived. It turned out that they too were looking for the skippers, so I showed them where I'd seen the Grizzled Skipper, and it was still around. We stayed with it for a short while before making our way up the steep path that leads out of the quarry in a westerly direction. At the top I scoured the hedgerow while the other two descended into the area below. I didn't find anything to photograph so also headed downhill. Between the three of us we spotted Dingy and Grizzled Skippers. The real highlight was a mating pair of Grizzled Skippers - something that none of us had witnessed before! 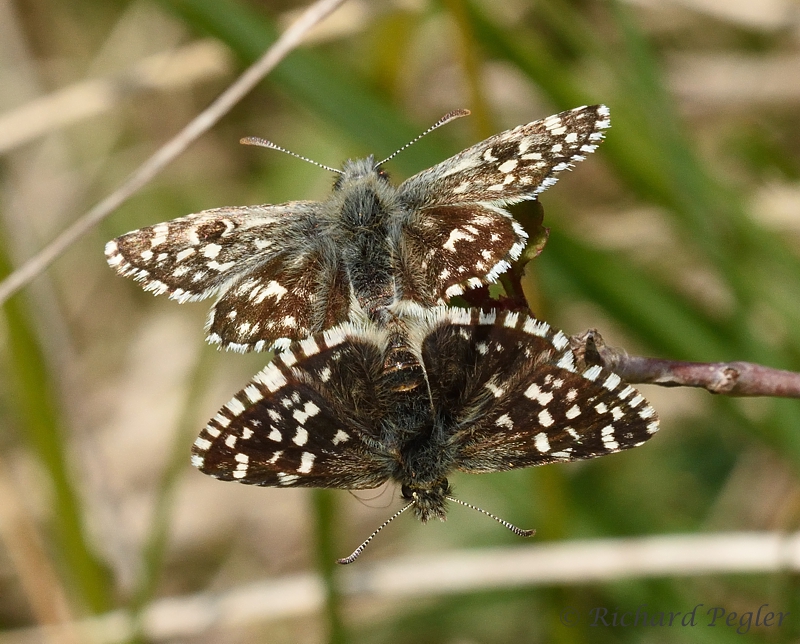 After a most enjoyable time spent here, I set off to another part of the site, on which I'd seen Dingy Skippers in the past, and my two companions headed off on a circular walk around the whole site.

I did find more Dingy Skippers, but I noticed that these were all tending to fold their wings soon after landing. I'm not familiar enough with this species to make any positive assumptions, but I'm wondering if this was because the day was warming up considerably and they found that they needed to minimise their heat absorption. 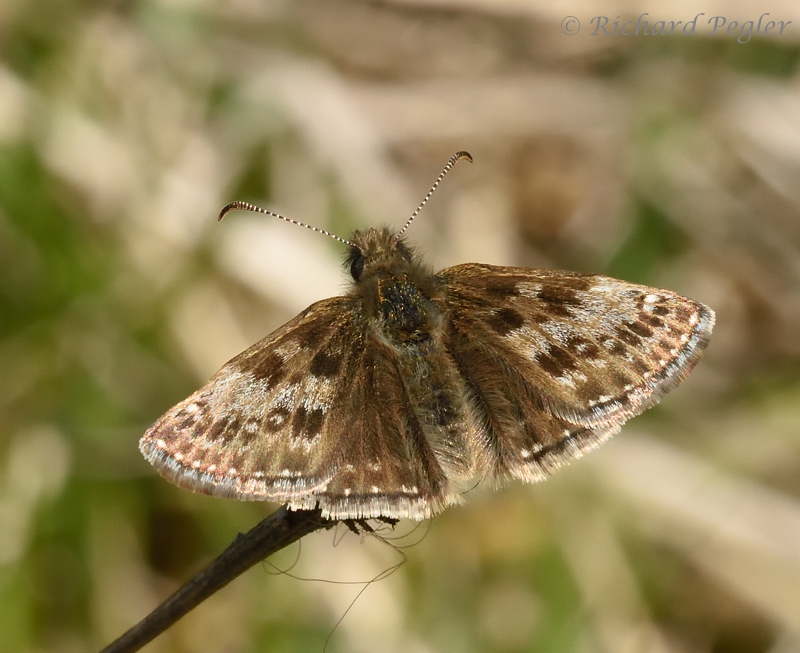 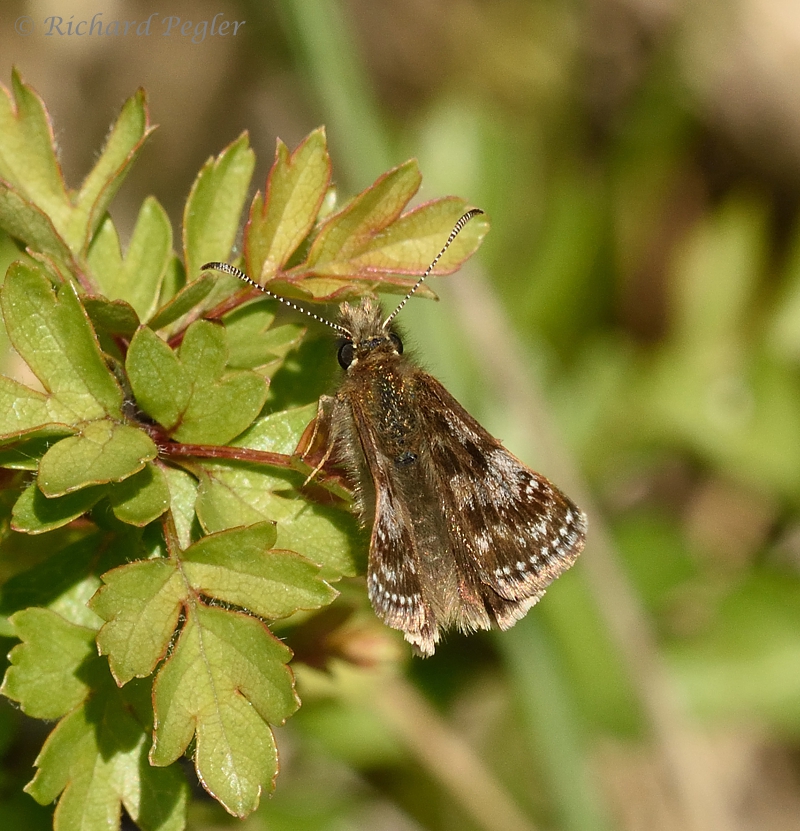 A Small Heath, in better condition than the previous one, proved difficult to photograph as it flew every time I got to within about six metres!

I also found a soldier beetle that I was not familiar with, although I understand it is a quite common species - Cantharis rustica :-

As I left this area, a Grass Snake sped across the path in front of me - too quickly for me to even raise my camera to it - and disappeared into a thicket.

I then passed through my original location and paid a visit to the small narrow 'valley' that heads up towards the north of the site. Here I photographed a few more insects, and also found my two companions from earlier, as they headed back towards their car. The first, below, is what I believe to be the very small moth, Pyrausta aurata, but there is a very similar Pyrausta, and I'm not sure.

In the hope of finding dragonflies, I headed back to my car and off to the Egleton side of Rutland Water. To cut a long story short, I had a distant sighting of one teneral Common Blue Damselfly, and didn't get close enough to get anything other than a record shot. I was quite intrigued by something that I assumed, at the time, was a wasp, but turns out to be a cuckoo bee species! There was also a moth doing its best to look like bird poo!

After this, it was time to head home after a most enjoyable and rewarding day, and there were no further sightings of interest.

Sadly, my day did not end on a high. When I was less than 100 metres from my home, the car in front of me stopped. I stopped, and then the car in front of me reversed into me at speed. Luckily, I had a witness to the event, or I think I'd have had a problem with the guy's insurance paying up. As it was, I was without my beloved Smart car for three weeks.


Thank you for dropping by. I suspect that my next post will feature the Outer Hebrides, and wouldn't be surprised if I had to break it down into two instalments!