This blog post, which is a little shorter than my previous post, covers the period from Christmas Day to New Year's Eve.

This was, of course, Christmas Day! I'm pleased to say that I did manage to finish Lindsay's Christmas present in time. It was what she requested after I'd finished a messenger bag for myself around a year ago - a leather shoulder bag in black, based on my bag, but larger and somewhat modified in design. Although Lindsay had input to the design, and saw the initial part of its construction, I managed to keep the latter part of its production from her eyes. I'm pleased to say that her reaction on the day greatly exceeded my hopes and expectations! This is a photo of it before the shoulder-strap was sewn and rivetted on - this was done on Christmas day to avoid kinking the strap. 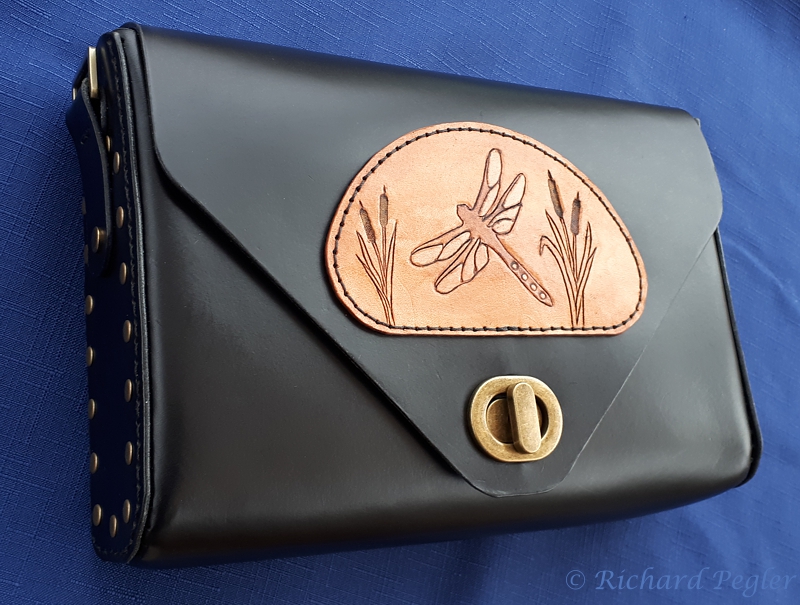 It now seems that I have to make another one as our daughter, Melanie, has said she would like one. The design will change again to feature a cat motif and it appears that I'm going to have to make it in grey!

Since my mother, who used to come to stay with us at Christmas, died almost exactly 18 years ago, it has been our custom for Lindsay and I to have a picnic lunch in the countryside on Christmas Day. These days we tend not wander too far from home and its facilities. This year we parked in a car park roughly two miles (3 km) from our home where there are bird feeders. Unfortunately it appeared that the feeders had not been filled lately and there were few birds around. I had taken bird food with me, and deployed some, but it didn't bring much in. The only shots I took were of a Magpie.

We had a short walk after lunch before returning home, but little was seen. 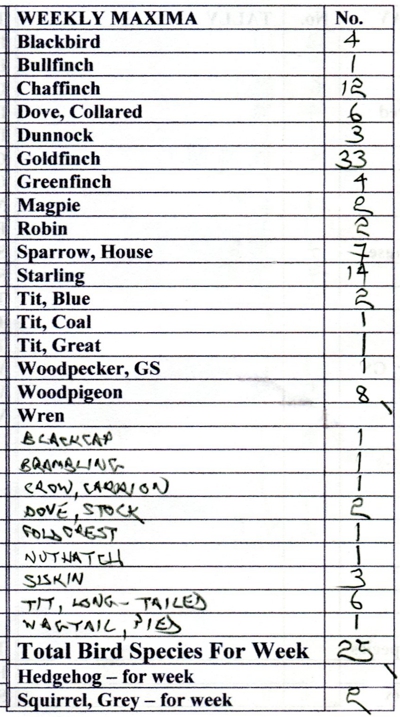 I did take some photos on this day, but none were kept. However this day marked the end of a fairly remarkable week in that 25 species of bird set foot in our garden. The list is as shown on the right. Please excuse my poor handwriting!

You can see that my recording sheet has a static 17 species listed. this was first used many years ago when we could have reasonable expectations of seeing those species at some time. However, two of those species, Great Spotted Woodpecker and Wren, are rare occurrences these days.  Sadly, it seems that Bullfinch might soon join them.

As noted in my previous blog post, the arrival of a male Great Spotted Woodpecker during the week was a real bonus.

The three Siskin (one male and two female) was exceptional.

With the male Brambling and female Blackcap still being with us, I was determined to try and get some better photos. However, the weather was against me, and these were the best that I could manage on this day.

Attempts to photograph the Brambling didn't fare much better than on the previous day.

Feeling the need for a change of scenery, I headed off to Swithland Reservoir. It was a bit busy with people at the south end so I continued to the north end, where I parked on the dam. It was about 15h00 when I arrived and a bit misty but with some sun trying to break through.

There were a couple of juvenile Mute Swan out on the water, and I attempted some shots of one.

I do like to take shots of birds, on water. Reflection shots can be interesting, but I am partial to 'splash shots' or when low light angles create a dramatic effect on the water surface. I failed with my splash shot attempts on this day, but did get some other shots that I am quite pleased with. 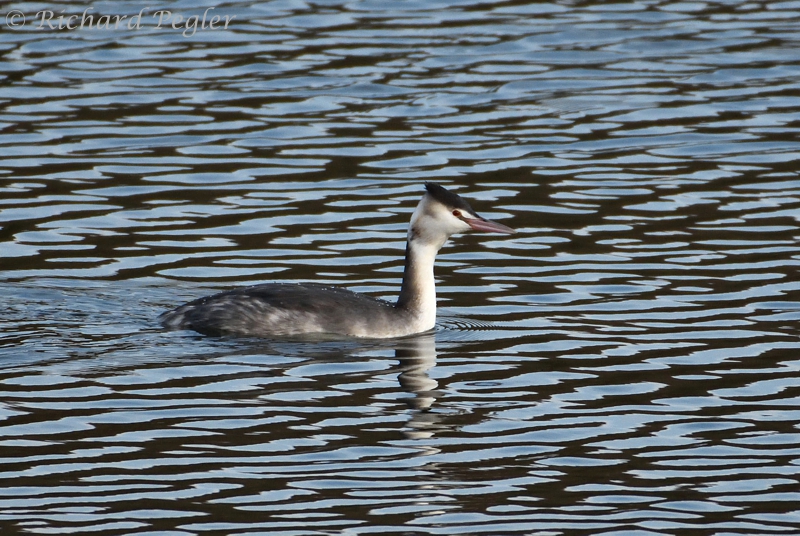 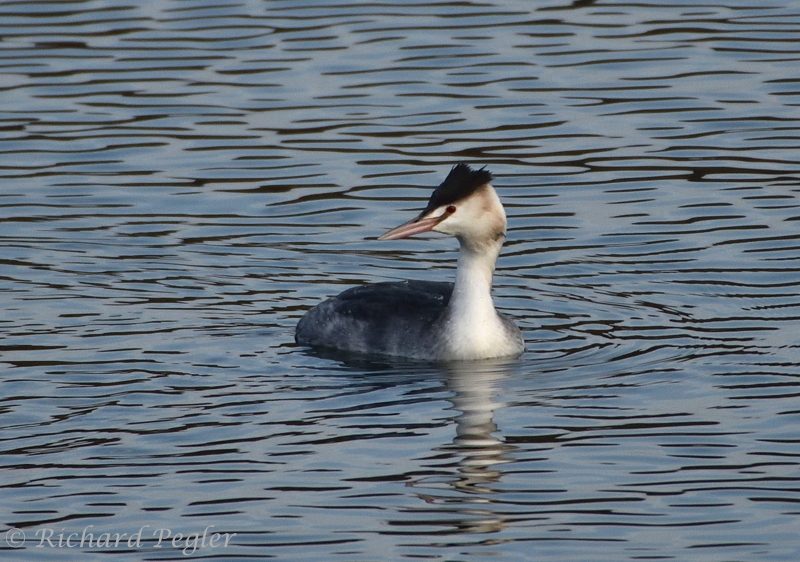 Whilst there, I heard the distant sound of a steam locomotive whistle. In due course the train arrived and passed over the viaduct that bisects the reservoir. It was the first time I'd seen a train on The Great Central Railway from this spot. 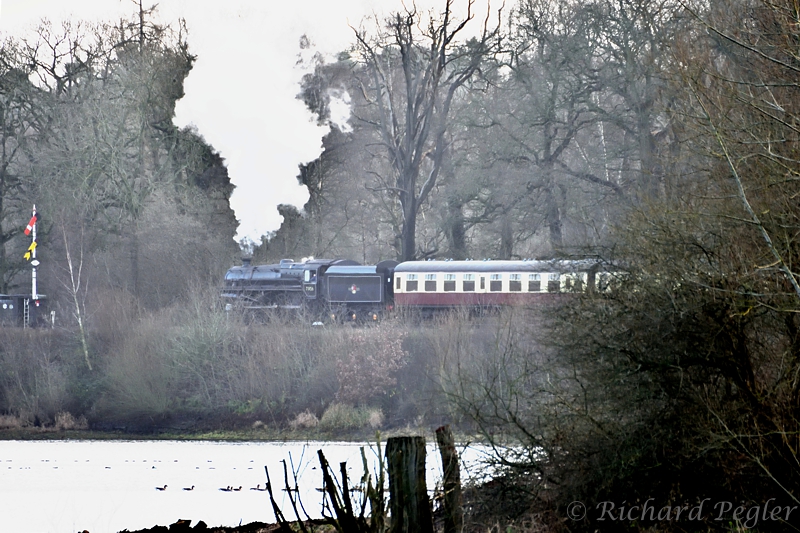 I'd made up my mind that I wanted to be at Cossington Meadows by sundown to see if any owls were around, so returned to my car where, looking over the dam wall, I saw a Tufted Duck at the water's edge.
Having arrived at Cossington Meadows at almost exactly 16h00, I quickly made my way to an area where owls are sometimes seen. Two gentlemen kindly informed me that they had just been watching a Barn Owl but it had disappeared into another area. We didn't manage to re-locate it so I went further into the site. Here I met up with two more people who were looking for Barn Owls but had not seen one yet.
After it had got too dark for photography we all gave up and headed back towards the entrance gate. I did manage a few shots of Canada Geese as they flew over on their way to the roost for the night.
There were two of us that were last to leave and as we neared the exit my companion noticed a distant owl. We were both of the opinion that it was too dark and too large to be a Barn Owl. We'll never know!
Friday, 31st December
The last day of the year and we had some sunshine. After lunch I got some shots of our garden Brambling that were a small improvement on previous efforts.
I'd recently become conscious of the fact that it was over two years since I last photographed a Barn Owl, and that I'd not even seen a Barn Owl in 2021. It was time to put that right, so I set off for Cossington Meadows once more.
Eventually, at about 15h00, a Barn Owl showed, but kept at a distance that was beyond meaningful photography. It disappeared to the far end of the area and one of the two people that I was with took the five minute walk down the track to the next gateway to try and get nearer to  it. I stayed put for a while and eventually managed some distant shots which, although not showing the owl in detail, I feel convey the atmosphere and action quite nicely. 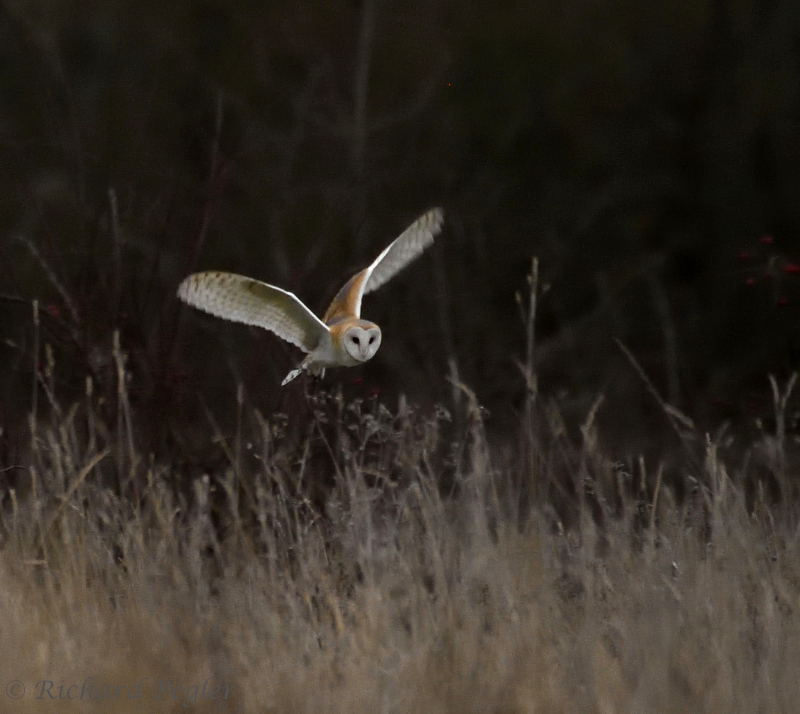 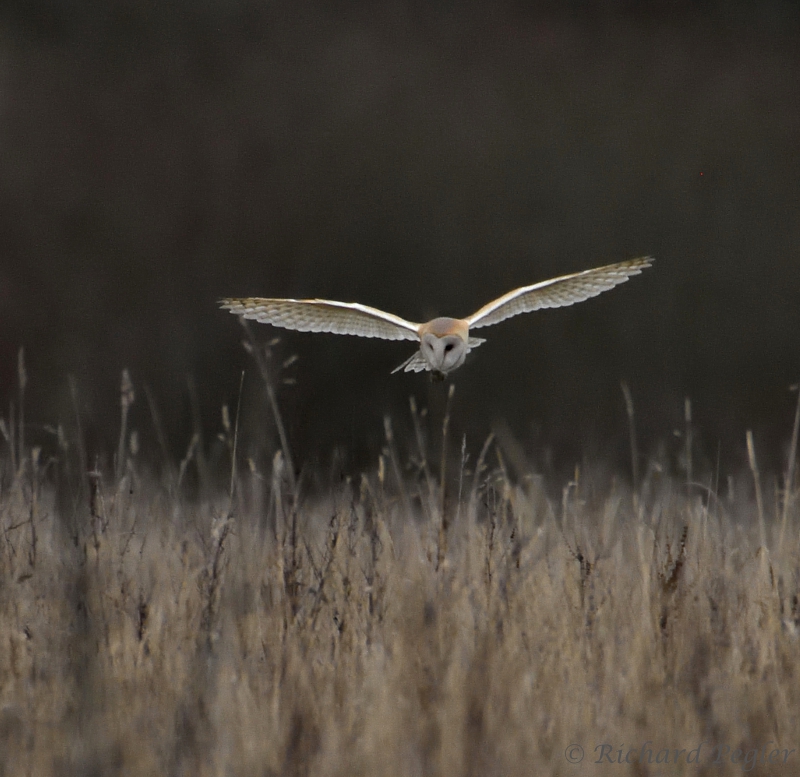 When the owl disappeared, I wandered down to the other end of the area to see if it was down by the next gate. It wasn't - but it had been, and I was shown a very nice shot that had been taken with the owl on a fence post.
It was getting rather dark and it was agreed that it was time to leave. The others headed back to the entrance, but I decided to have a stop at the first gate and was rewarded by the owl returning. It didn't come very close but it did provide a little more action and, at one point, crossed over the track and into the opposite field. Unfortunately, a shot of it dropping, feet dangling, onto prey came out a bit to blurred to use 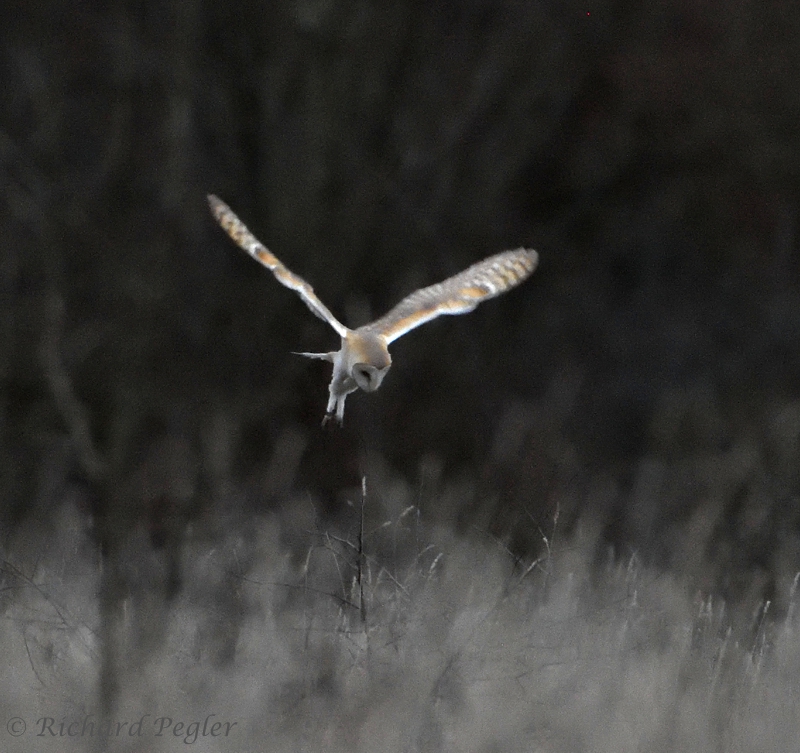 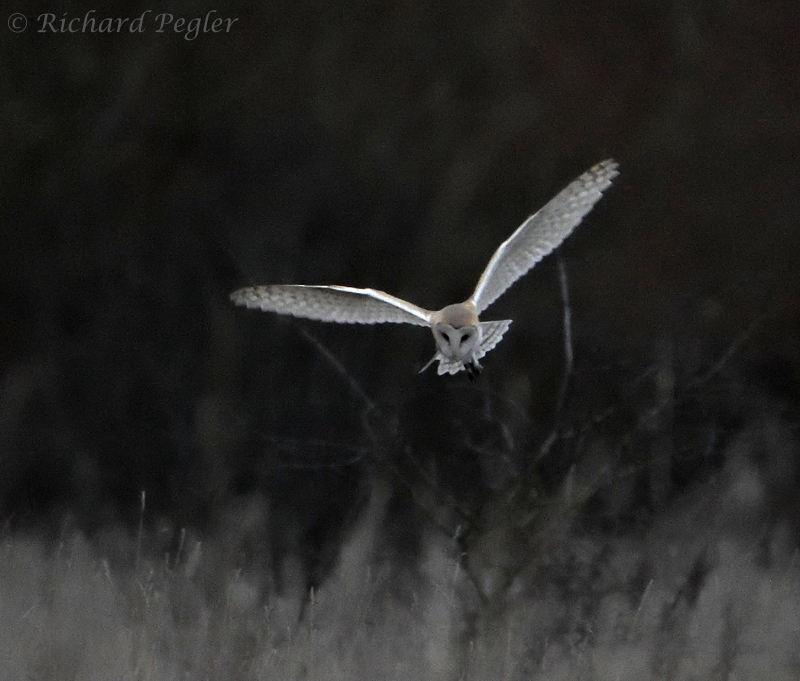 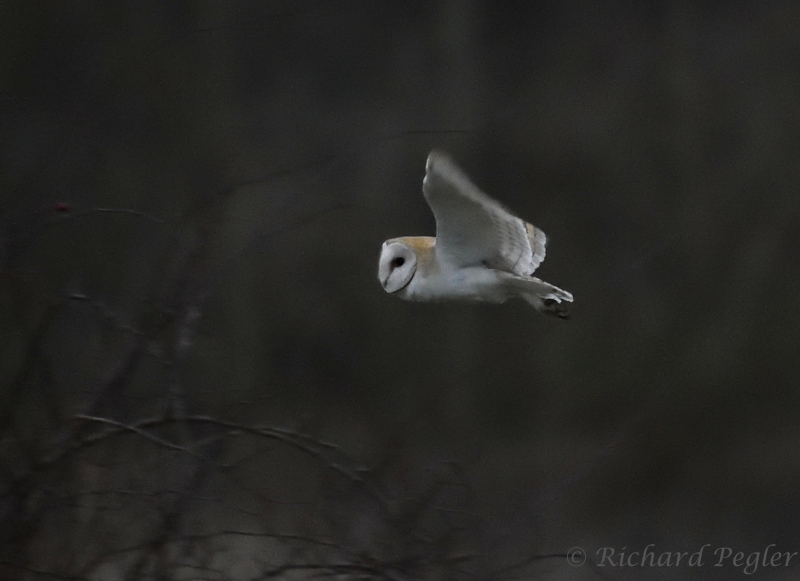 I'm not sure when I might see and photograph another Barn Owl, so please excuse this excess of photos. It was a joyous occasion in some respects, but my thoughts were constantly with the late John Truman who was passionate about Barn Owls and in who's company I have spent many happy hours at Cossington Meadows.
That brings me to the end of my year and the end of this blog post. I hope to be returning with a new post in a week or so's time. In the meantime, I once again wish you a Happy New Year. Please take care of yourselves and Nature - - - Richard
Posted by Richard Pegler at 10:34