Having returned from Hungary late on Sunday night, and then spent all day at home, recovering from over-indulgence, on Monday, yesterday was a day for catching up locally. I had to take the car into Loughborough for some major work first, and so just before mid-day I set off in the courtesy car. My first port of call was one of the Little Owl sites on my local patch. I nearly missed her as she wasn't in any place I'd seen her before. However, I eventually spotted her (in full view) in a low window opening. She obligingly allowed me to photograph her from relatively close quarters. 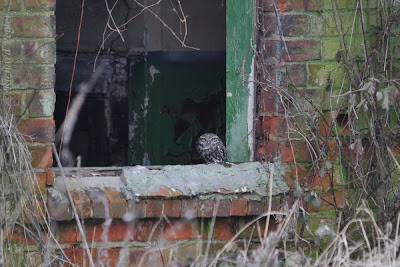 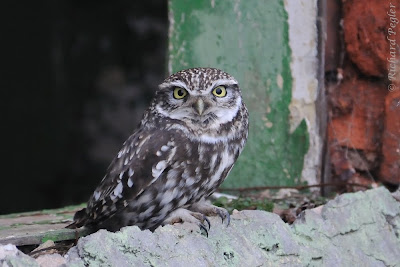 Little Owl - my site No.02
After this, I visited three of my other Little Owl sites (which involved about two hours walking across fields in the snow), and a 'potential' LO site (another half hour walk on footpaths) but no more owls were seen. However, near Kirkby Mallory, this Buzzard obligingly sat there whilst I took some shots from my car window. 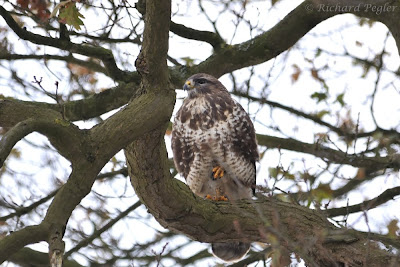 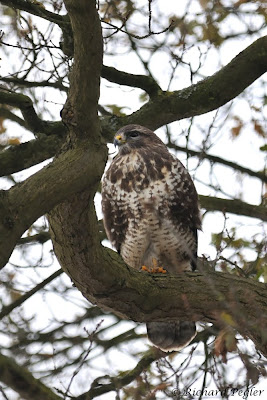 Common Buzzard
I did see plenty of other birds (mainly Redwing and Fieldfare) but no useful photos were taken. As it started getting dark, I debated whether to stay out and try and find some more owls, but I'd got myself well and truly chilled, and so decided that it was time to go home for a warming tipple!
Posted by Richard Pegler at 12:52