This summer I've only had a couple of dedicated photographic sessions with the Little Owls that I monitor, and only one of these sessions came up with the goods. Most of the time I've just travelled around from site to site, grabbing the odd image when it came to hand.

I've been getting the impression, during this recent spell of warm weather, that the owls are favouring being out in the morning before the day heats up too much. Now these days, I'm not an early riser, but on Friday I made an exception, getting up just before 5.00 a.m., and arriving at my Little Owl Site No. 17 just after 6.00. As I arrived, an owl was out on the roof of the hut in which they nest, but it flew off as I walked up the drive to the farm. I set up my hide in a sheep paddock, with no owls in sight (although I wouldn't mind betting that they were watching me!). These days I'm more and more using a tripod with gimbal head (all Manfrotto) to mount my camera on.

I only had to wait about half an hour before the first owl (an adult - I believe female) arrived, and landed on the apex of the hut roof.

Shortly after its arrival it gave me the first of a whole raft of interesting poses that it struck up over the next couple of hours.

It then moved over to the other side of the roof - fortunately still in sight.

So here are some of the strange poses - but I will sling in the odd 'normal' pose just so we don't lose track of what we expect these birds to look like. I'll also diversify with some possible captions - please let me have any suggestions for alternatives!


This next one is possibly my favourite of the lot!

Finally, from this particular sequence, I don't have a clues as to what is going on in this next image - note the position of the talons to the left of the bird!

Shortly after this, the adult owl disappeared, but one of the juveniles flew in only 3 minutes later - and landed on the roof just like the adult.

It then moved to the right hand side of the roof - just like the adult!

And just like the adult, it then moved into the opening in the end of the hut! However, adult No.1 was back on the roof within 7 minutes.

This time the adult was looking like a regular Little Owl.

The juvenile also decided to put on a show, but nothing like as good as its parent had done. Here are a few images. 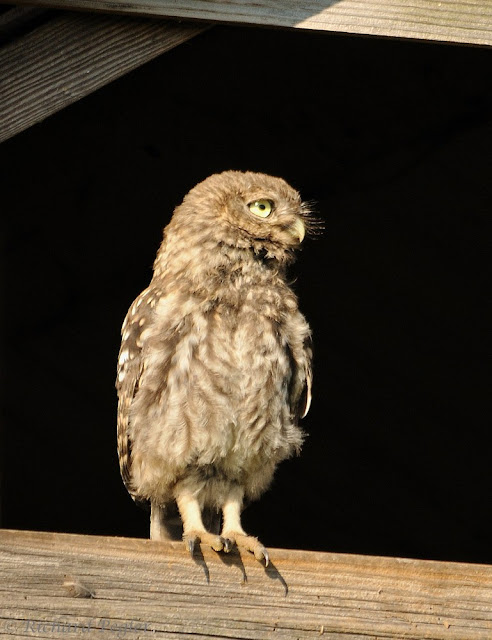 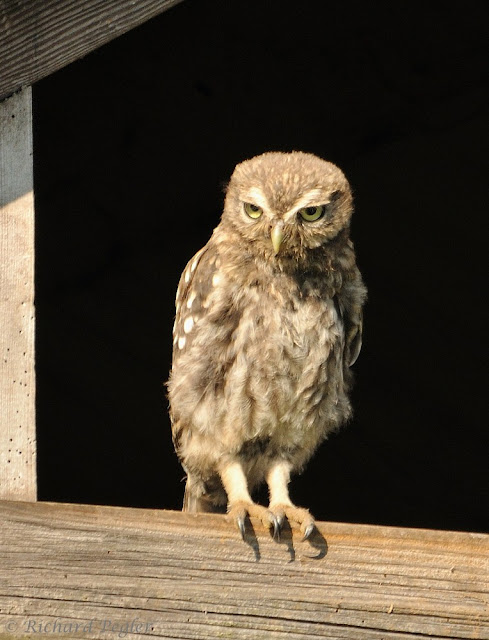 This juvenile entered the hut at 9.00 a.m., followed by the adult at 9.07. At 9.34 the second juvenile appeared, this time landing directly on the right hand side of the roof of the hut. 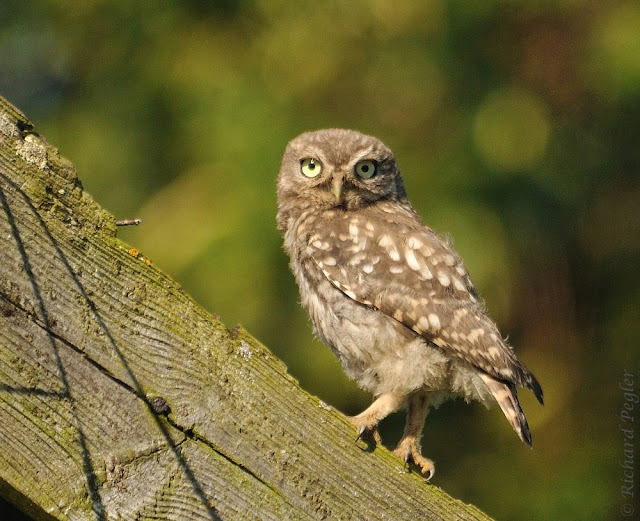 This one soon went round to the opening in the end of the hut, but didn't stay long before ducking into the hut.

I hung around for another twenty minutes, hoping that the second adult and/or a third juvenile would appear. However, it was getting rather warm in my hide by now, and I was starting to nod off after my early start, so I packed up at 10.15 - well-satisfied with the 350 frames that I had taken!

As I left, I found the second adult on a distant post. It didn't stay around long enough for me to compose a shot, but here's one for the record.

Memo to self - must sort out another dedicated photographic session somewhere, soon!
Posted by Richard Pegler at 20:29