Although I've been a bit busy sorting out images from our Northumberland holiday, I did manage to get out and do a reasonable amount of owling in late July, weather permitting! In fact I ended up with by far my best monthly record for sightings so far this year, and only exceeded by June and August last year - when we had the good weather and I wasn't away! This August has got off to quite a good start already. So here are some images from this last week.

Sightings are getting more sparse at my recently new Little Owl Site No.28 as the juveniles wander further afield. This site will get a new owl box on Monday in the hope of giving them a new home when they are evicted from the roof of the house.

These images are of an adult bird (unless this is a very advanced juvenile!), on two different days 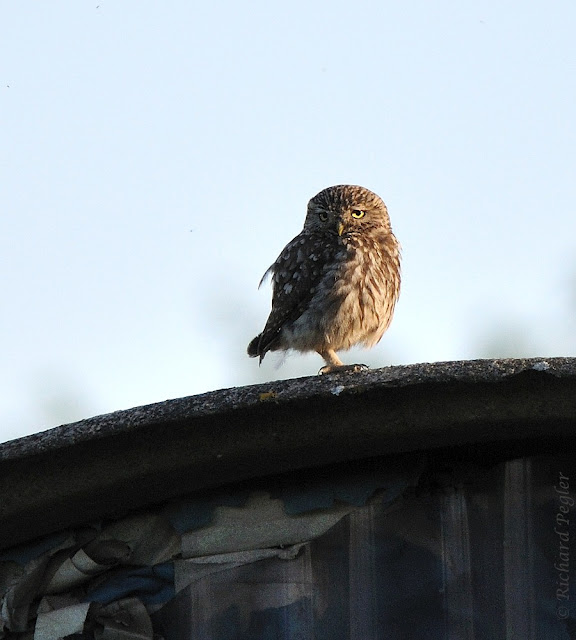 At last I have managed to get some images (albeit very distant) from my recently rediscovered LO Site No.07. The original bird was evicted, over two years ago, by Jackdaws. I think that the bird that I am seeing now is a recently dispersed juvenile, and it's favouring a tree about 300 metres from the original nest tree. For convenience I'm sticking with the original site number, until I find its actual nest hole (if it has one). I'm not convinced that it will hang around long, however.

I was sitting in my car scanning when it came back, having been frightened off by my arrival. It was not long before it went to sleep - and so we both sat, me and the owl, for over an hour! In the end I decided to get out of my car and try and sneak up a little closer, but it heard the car door and was instantly off! 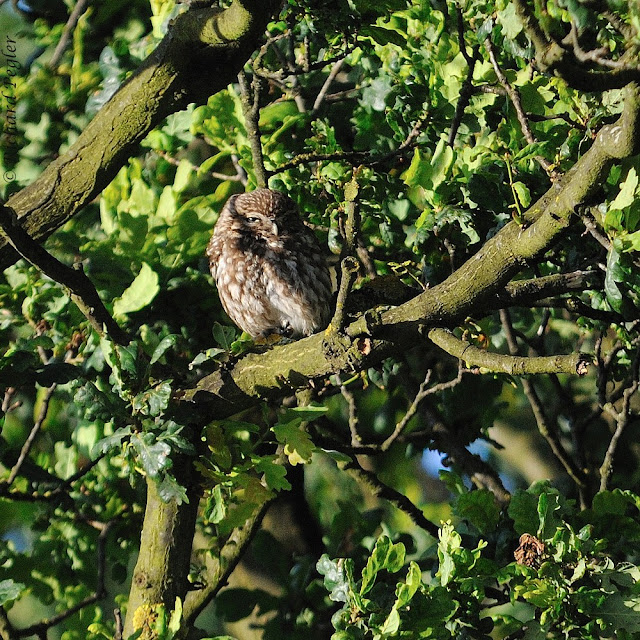 The juvenile Little Owls on my 'local patch' LO Site No.02 are continuing to thrive and I expect them to disperse at any time. For the present, however, they are still 'living at home' and providing some good sightings. When I was there on Thursday one of the adults was dozing on the crumbling end wall of the barn.

One of the juveniles was sitting in one of the many holes in the roof. On this occasion I only saw the one juvenile.

Meanwhile the second adult was out on the chimney at the other end of the building.

By the time that I turned my attention back to the juvenile, it too was nodding off!

Yesterday I called in again on my way to pick up a Little Owl nesting box. When I arrived, an adult was on the chimney and, almost immediately, a juvenile peeped out from one of the holes on the roof, where I'd not seen an owl before.

It soon ventured further out, and then flew up onto the apex of the roof - amazingly, another first!

Soon a second juvenile appeared from the same roof opening, and had a stretch.

All this was from my car. In the hope of some slightly closer images I left my car and crossed the stile to the footpath. I was not surprised when this second juvenile ducked back to the edge of the roof opening that it was in. I was, however, quite surprised, considering that I was standing out in the open, when a third juvenile, bold as brass, appeared from behind me and landed beside its sibling.

They didn't stop long but, almost immediately juvenile No.1 (at least I think it was - I was getting a bit confused by now!) appeared in the large upper roof opening, where I more usually see the birds. All this took place within five minutes of my arriving!

On Thursday I did a turn of duty on 'Osprey Watch' at Rutland Water. There were Ospreys everywhere - at one point we had six in view at once! About 15 minutes from the end of the shift my pal Titus who had come with me, said that he'd just seen a Barn Owl come of of the box and fly off. I went to have a look and there was a second Barn Owl just emerging, which also flew off. Unfortunately it headed away from us, and we didn't pick it up again as we headed back at the end of the shift.

We had a stroke of luck on the way home, however. We'd stopped briefly in the failing light at my LO Site No.21, where sightings have been very sparse this year. Last year they bred, but later in the year I found the remains of a Little Owl. I suspect that there is just a lone bird here now, and no juveniles have been seen. We stopped on both outward and inward journeys and didn't manage to see an owl here on this day either. However, just one kilometre further up the road Titus said "Stop - Little Owl!" We continued about another 400 metres to a place where we could turn round, and carefully returned. It was still there. It was almost fully dark by now, and it stayed there whilst I banged off numerous shots. We then left it sitting there, went another 300 metres down the road to turn round again and found it still there when we returned. I need to find out where it is nesting, but this looked like an adult bird, and I'm going to call this my new LO Site No.29!

It wasn't till I came to process the images that I found that I'd got the zoom wound back from 500 to 380mm. I considered cropping the images down somewhat, and lifting the 'light levels' to something approaching daylight, and then discovered that I liked them best as they were - still somewhat lighter than the actual situation, but a better representation of what the scene was actually like. I was also pleased that I'd got the lens a bit wider than intended, as I prefer the composition. The numerous 'full moons' are the distant lights of Beeby. 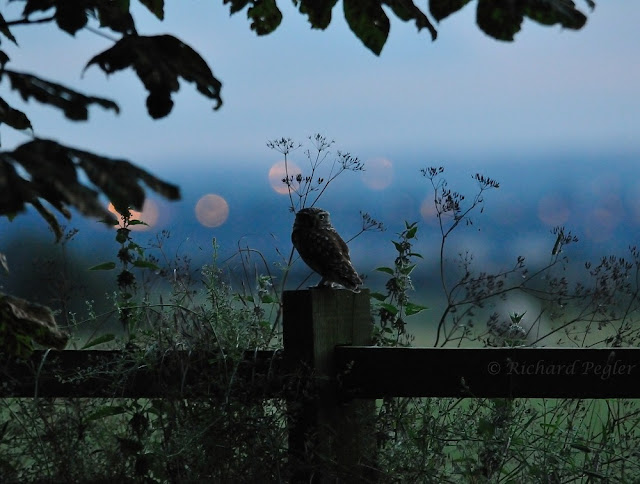 Aw shucks! I couldn't resist a cropped one! I still prefer the atmosphere of the first of these two images, however.