If you've looked at this post before and think that it looks a little different this time round, you are not mistaken. I felt that the images, taken into the sun, were a little dull, so have brightened them up a bit (RP on 5th October, 2012)

For a whole raft of reasons, I had not been out owling for thirteen days and, having to go out somewhere where there was a phone signal (thank you Orange for messing it up!), I thought that it was time to re-connect with the owls. I arrived at my Little Owl Site No.02 ('old faithful'!) to find one of the owls out on the chimney. Staying put in the car, I sat there watching. After a while it flew off behind the barn, but reappeared about fifteen minutes later in a place that it doesn't usually sit. I sat watching the bird for nearly half an hour before deciding to get out of the car and take some photos. The bird was in a very confiding mood and let me take all the photos I wanted, and was still there when I sat back in my car again!

I know that I have published umpteen images from this site, but I think that these are in a different location to virtually all the others. 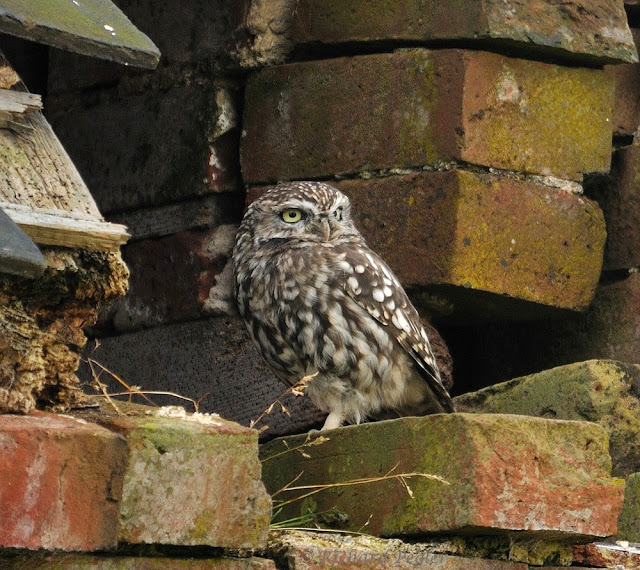 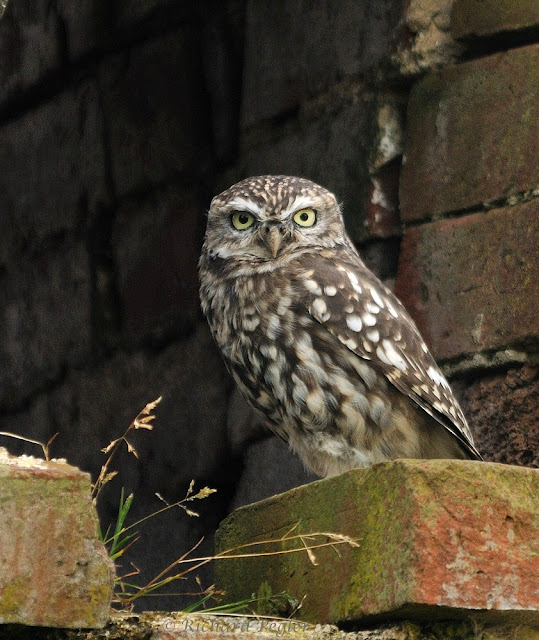 Closer to home, and in the pouring rain today, a male Sparrowhawk paid us an unwelcome visit. I'm amazed at how a photo taken through the rain-streaked glass of the conservatory window, and through the rain itself, can be processed to look quite reasonable, with only bad fogging to the left of the image. Incidentally, I think that this bird might have been the cause of the disappearance of our juvenile GS Woodpecker. It was sitting atop the feeder that the woodpecker used to frequent, and looking as if it was wondering if another might show up.