When I was in Yorkshire recently, I was extremely impressed with the results that a couple of the guys up there were getting with the latest Sigma macro lenses. I've also been inspired by the macro work of John and Sue Rowe in Cornwall, and Noushka (who prefers to keep her surname unpublished) in south-west France. I was, therefore, working towards getting myself a Sigma macro lens next year.

Last week I was out gardening when I found Vapourer moth caterpillars on our Tamarix bush (we get them on it every year). I went inside to get the camera (Nikon D300s) with the Sigma 150-500 on, and started taking some shots. The result was a couple of images that weren't too bad, but I had to take a lot to get these two. 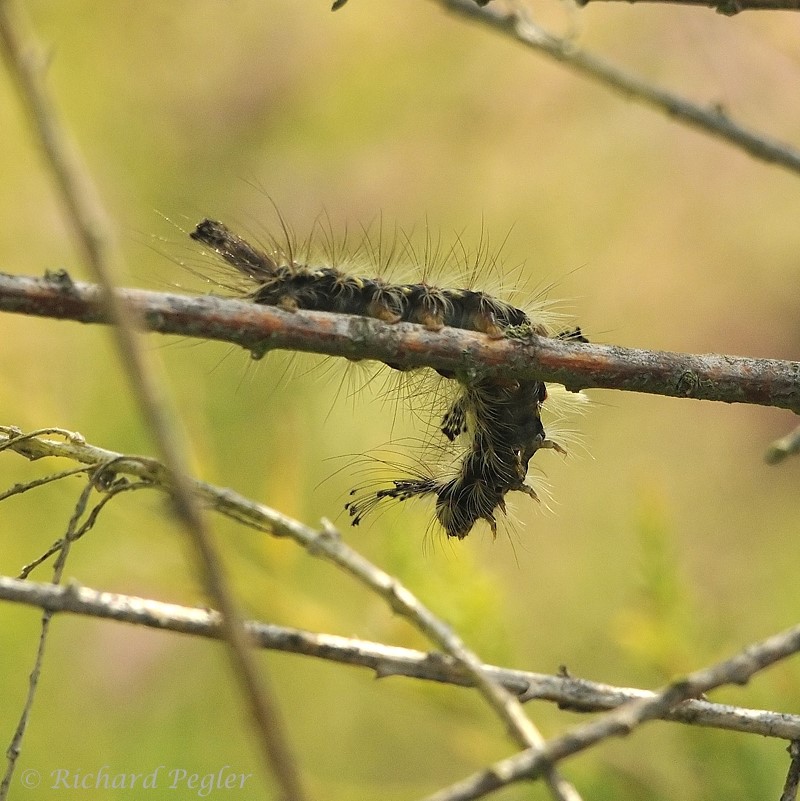 The problem is (other than issues with the capability of the photographer!) that the Sigma lens doesn't focus to less than just under three metres (although the spec says 2.2 metres), so you need to use the lens at the full 500 mm and, therefore, you tend to be struggling for speed, aperture and depth of field.

Suddenly a thought flashed through my mind (it happens occasionally!) - I remembered that somewhere I had an old Tamron 28-300 lens that I'd discarded about eight years ago which professed to have a macro capability. It was found and fitted to the spare D300s within minutes and I was back with the Vapourers in no time flat.

Now, this lens was a cheap one and I didn't expect much in the way of results, but it did focus down to just under half a metre, and a 300 at half a metre gives somewhat closer results than a 500 at three metres! Furthermore, although it didn't have OS, it's easier to hand hold a 300 than it is a 500.

All in all, I was quite pleased with the results on the Vapourers. The first image shows the widely differing sizes of these caterpillars, which emerge over quite a long period. 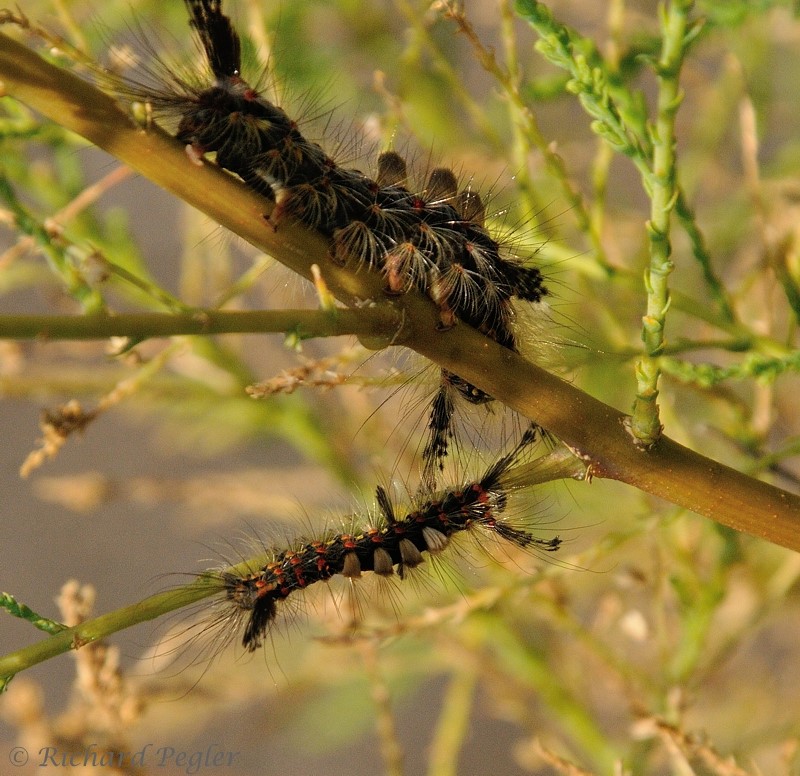 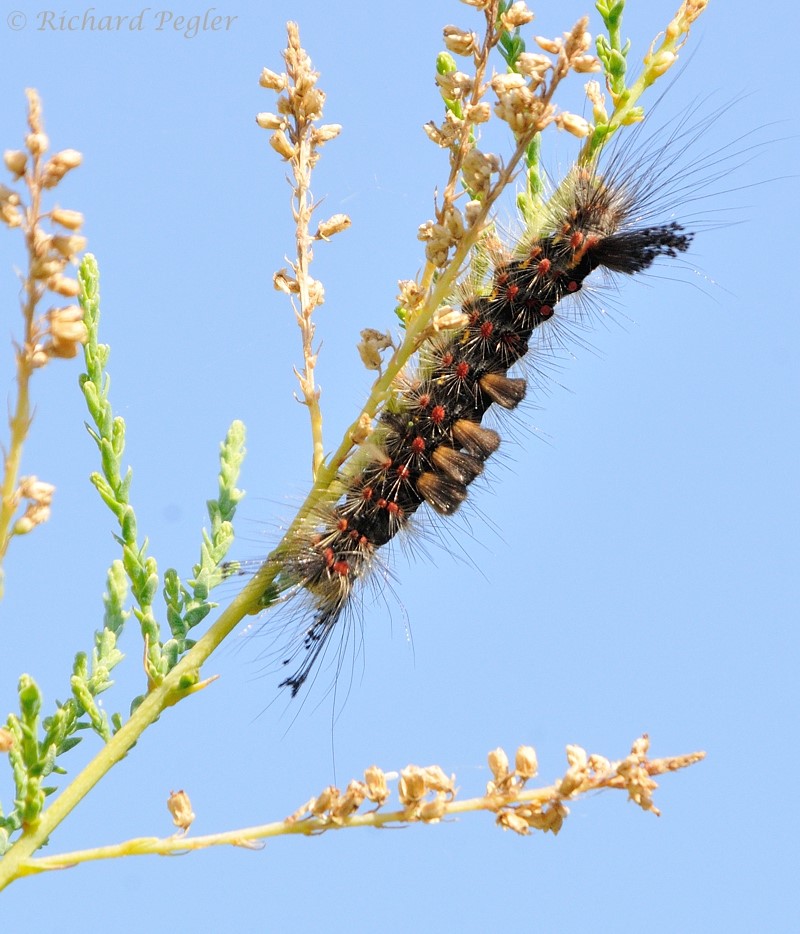 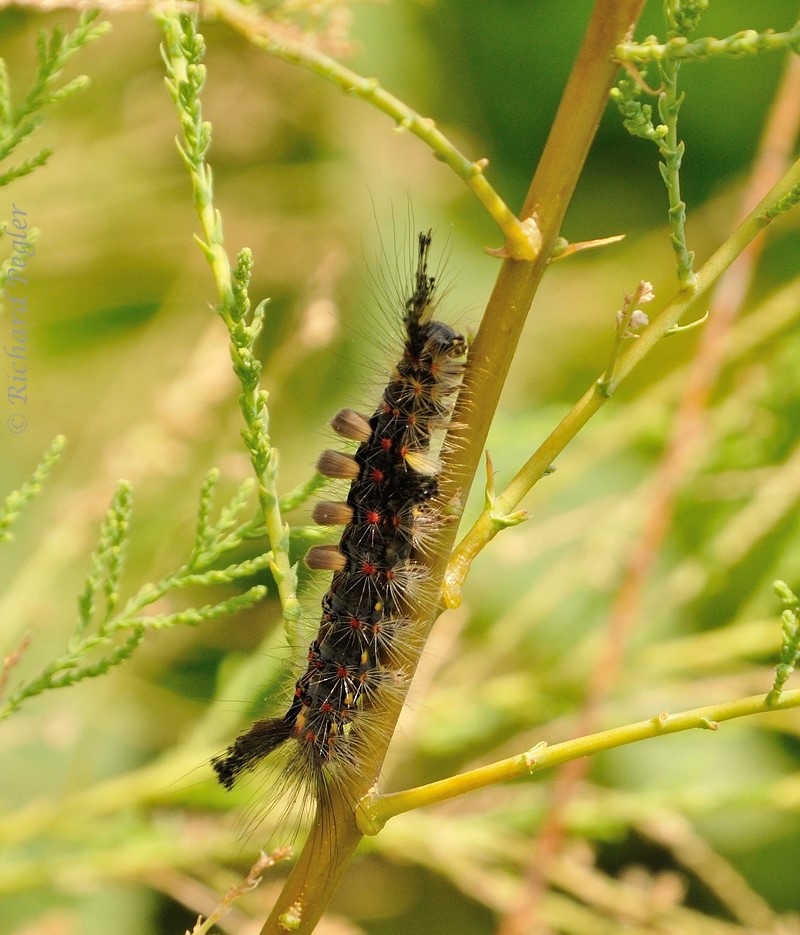 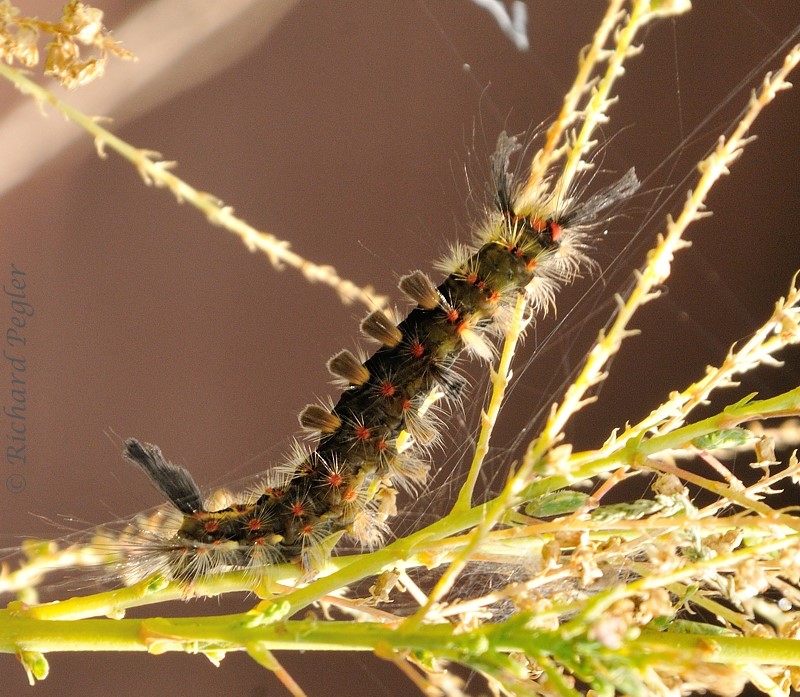 After this session I tried it out on some butterflies in the back garden. Incidentally, the Red Admiral was seen in the garden for the first time this year, only a few days previous to this. Whilst there is still much room for improvement, I was getting consistently better results than with the Sigma 150-500.

On Thursday 29th I was on duty at Rutland Water, and took the Tamron lens with me. I didn't fare quite so well as the light levels were much lower and this, as I learned, does not make for good macro - nor does a stiff breeze, causing the subject to move about! These are the only vaguely usable images that I came up with.

The following day my wife I met up with our good friends, Roger and Lynne Doble, who were up from north Devon for the week. Roger and I spent time at Rutland Water (Roger's a long-term bird watcher) whilst the ladies went swimming and then shopping.

We only had a short time to play with in the morning (we were meeting the ladies for lunch), and it was a bit cloudy too, so I didn't have much opportunity to practise with the Tamron. It's a pity that the Copper was so tatty as I don't see too many of these. 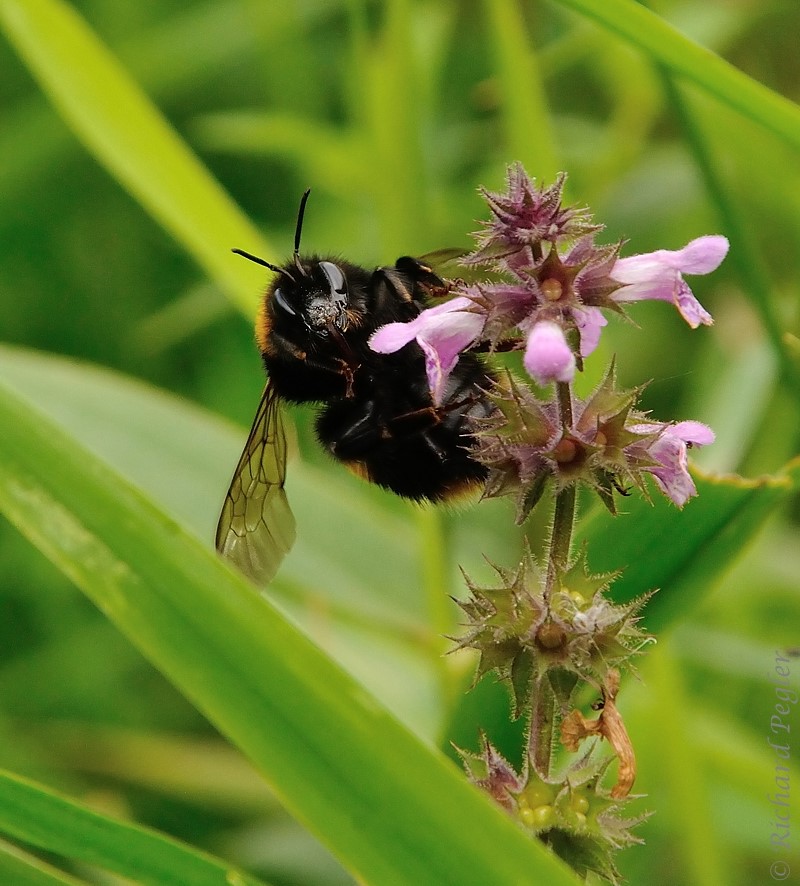 Lunch was a little frustrating as two Red Kites came into the garden of Wing Hall, where we were having lunch, with my cameras locked safely away in the car! I've never been so close to a Red Kite - even at Gigrin farm!!

In the afternoon we had a couple of hours on the Egleton side of Rutland Water. This turned out to be quite productive from the point of view of subjects for practising macro on. First to be photographed was a pristine Painted Lady. This was the first for the year for both Roger and I, and earlier in the day we'd been talking about the lack of them!

The real stars of the afternoon were, however, the dragonflies. We now had full sunshine and, although there was a bit of a breeze, there were some nice opportunities. Nothing astounding was seen, but it gave me more practice and I'm quite pleased with the results. 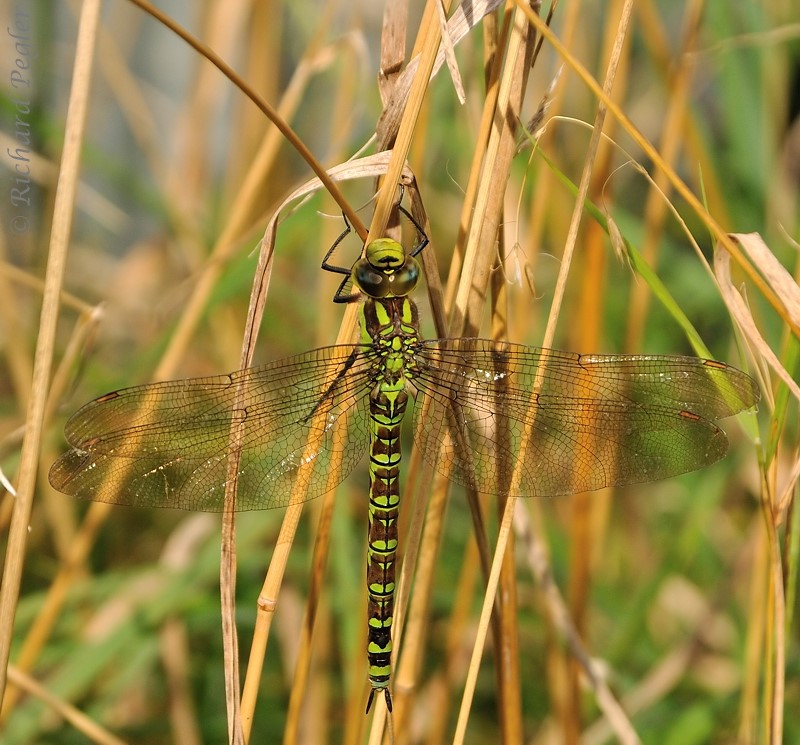 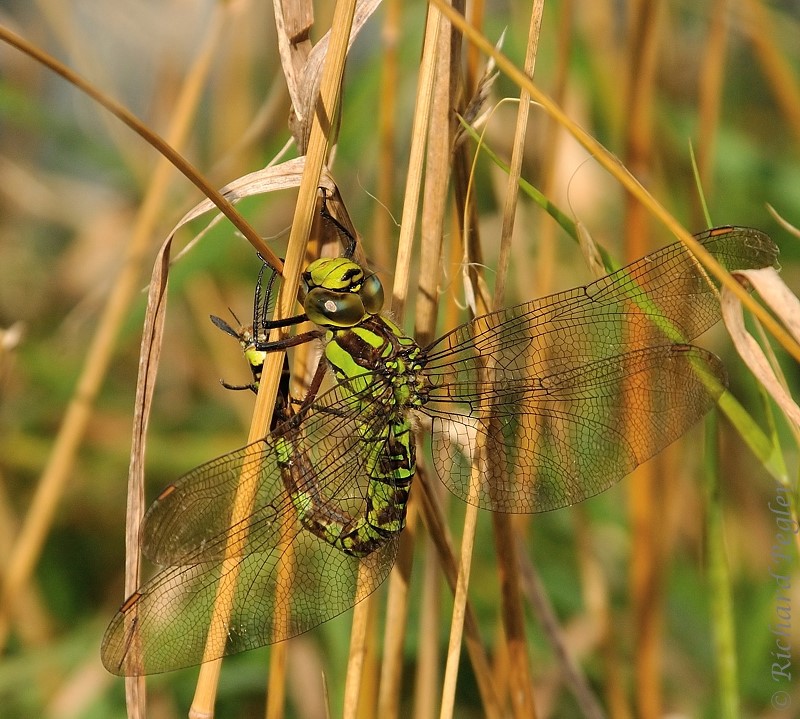 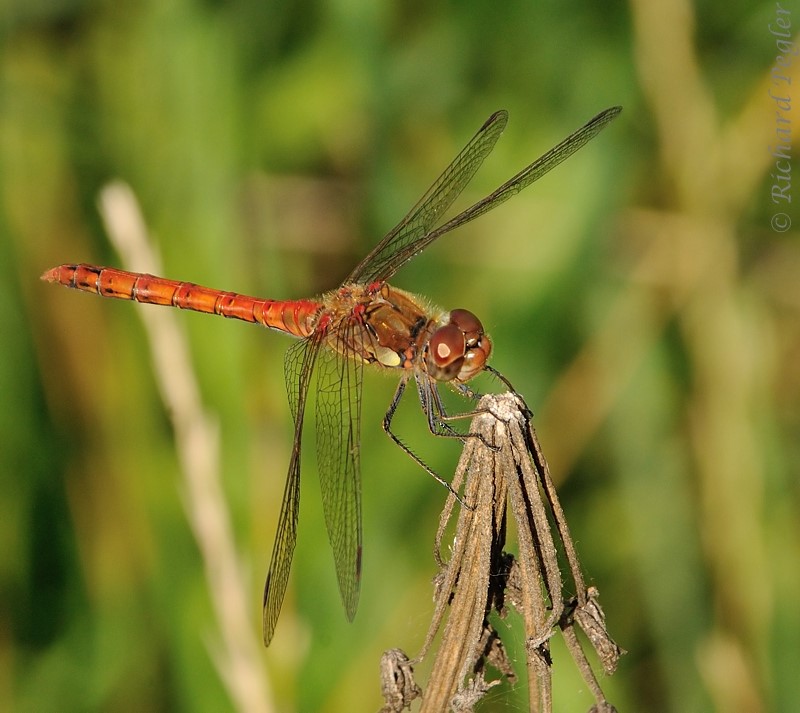 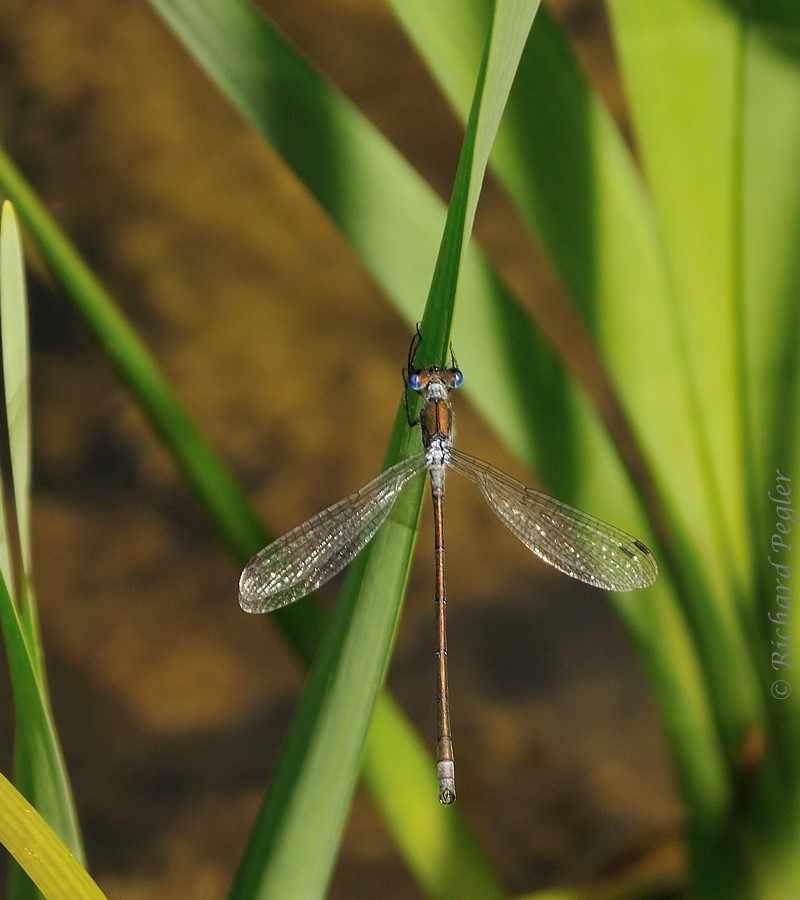 I've not done much since Friday, but I did find a shield bug whilst I was gardening (it was inside my shirt when I took it off as I was getting too warm!). This is the smallest thing that I've tried to photograph (about half an inch/ 1 cm long), and the results are not too good. No, that's not the inside of my shirt - I took the bug off and put it on a low wall!!

My ambition is to be able to take images that are detailed enough to, for example, show the individual elements in a dragonfly's eyes. I don't think that I'm ever going to do that with the Tamron. However, the Tamron does have advantages in the flexibility of its use.

Any criticisms and advice would be gratefully received.

My particular thanks to John and Sue Rowe and to Noushka for your inspirational works.

In the meantime, I must get back to the owls!!
Posted by Richard Pegler at 13:23