Earlier in September I posted on the owls, with some images which included sightings up until 5th September. Here are a few taken since then.

On 12th September, on my way to pick up Titus for an afternoon out, an owl was out in one of its favourite positions at my Little Owl Site No.02. Most of the time it looked as if it was about to nod off!

Having picked up Titus, we set off for a spot of owling. One of the owls was out at my LO Site No.41. It seems that this Hawthorn bush has become its favourite roosting place as I've seen it there three times in succession.

This time, the owl decided to move from the bush to the nearby barn roof. It then flew to a more distant location. I believe that this is the first time I've actually captured a Little Owl in flight. They're pretty poor images as I wasn't intending a flight shot, but it might actually prompt me to try and do better! 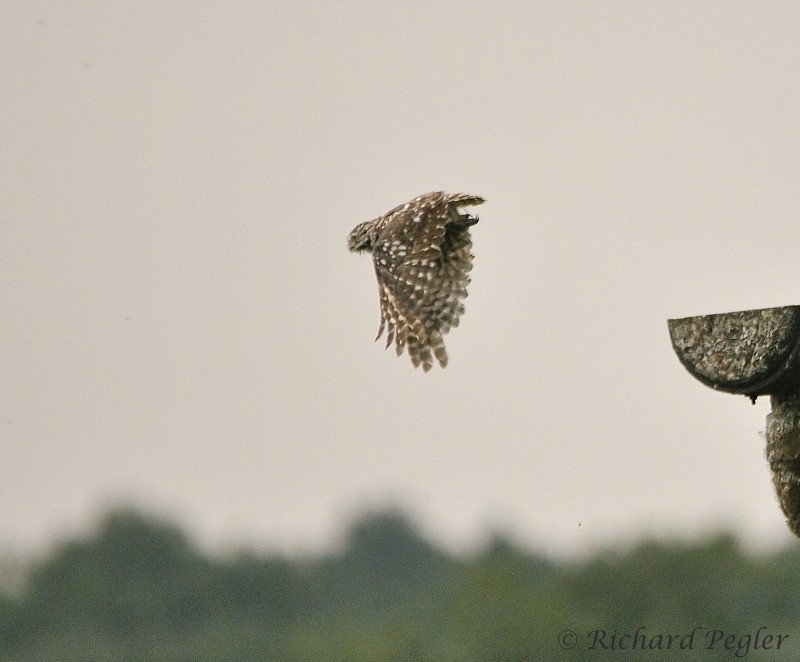 Later we were at my LO Site No.23, and found an owl out on its favourite perch. We only viewed it from the car, at a distance.

After this we had a most enjoyable afternoon at Rutland Water.

A week later, on 19th September, I was again out with Titus on our weekly get-together, and we found a Little Owl out at my Site No.41, again in his favourite Hawthorn bush. This time we managed to take our photos and leave him undisturbed.

Again we spent the rest of the afternoon at Rutland Water, and there were no further sightings of owls that day.

Out with Titus again to Rutland Water, we found a Little Owl again at my Site No.23. In spite of passing by this place maybe five or six times a month in the summer over the past four years, I've only seen the owl here about seven times, so I was delighted to find him again so soon after the last sighting. This time he was enjoying the warm rays of the sun whilst sitting in the shelter of an RSJ.

I have had some owling excursions without Titus, but no interesting sightings occurred. On my last attempt I heard owls at two locations, but they were hidden away in their nest trees. I'm hoping October will bring better results, especially as I'm expecting to have a bit more time on my hands.
Posted by Richard Pegler at 17:00