By 18th November I'd already passed my abysmal record of owl sightings for October. On Tuesday 19th November the weather was beautiful, if a bit cold and breezy, and an owling session was indicated. In the morning I visited a few old sites, but nothing was seen, and I'm dubious that there are currently any owls in residence at any of them.

I decided to have my picnic lunch by Little Owl Site No.41, where the nest cavity was destroyed in a gale and pal Titus and I erected a nest box in October. We knew that the owls were still around, but it was even more encouraging this day as I first found one of the owls in the nest tree above the box, and then spotted the second owl in a nearby hawthorn bush. I sat watching them for over an hour in the hope that one would move - hopefully towards the nest box, but they both barely twitched a muscle during that time.

Until these owls are well and truly settled I will not risk disturbing them by attempting close-up photography. This next shot, of the owl in the nest tree, was taken from my car during  my lunch stop, at about 60 metres range.

To continue my journey I had to pass the nest tree, so attempted a drive-by shot of the owl. Unfortunately my lens had wound back to 400mm, so I didn't get as intimate a shot as I'd hoped for.

About 25 metres further on I had to stop to open a gate (gated road), and was abreast of the hawthorn bush with the second owl, which showed much better from this angle, and I was only about 20 metres away. Sadly my lens had, by now, crept back to 380mm, so the quickly grabbed photo (remember, I was determined not to disturb this owl) was not as good as it might have been.

Feeling extremely encouraged by these sightings, I continued on my way, drawing a blank at the next few sites I visited. Way back in mid-September, I'd been given a tip-off as to where Little Owls had been seen. Several visits had been made to the locality, but nothing was seen and I was far from certain that I was looking in the right area. However, on this day, I was to be rewarded. An owl was spotted as I approached in my car. This is now my new LO Site No.42 - my first since July (I've been telling you that it's not been a good year!). As public access is rather distant (50 metres at its closest), I now have to find the land owner to see if they'll let me approach a little closer.

Two days later I was out with my pal Titus on our regular Thursday adventure together. We lunched at LO Site No.41, where one of the two owls was seen. We almost missed it because there was a bitterly cold wind blowing and it was well tucked in, over on the far side of the field.

Back in January I'd found a new Little Owl site (No.34) and was quite excited about it as it showed a lot of potential. This excitement was enhanced by finding, in just a few weeks, a further three sites within half a mile (800 metres) - all of them, except one, having pairs of birds resident. Hopes were dashed, however, when two of the sites (including No.34) had the birds evicted by Jackdaws. A third site was disturbed by a new barn build. The sighting of the single bird at the fourth site was never repeated.

I've never given up on these sites (the Jackdaws didn't hang around for long), and only a few weeks previously Titus and I had been saying that No.34 really was a wonderful place for an owl. You can, therefore, probably imagine our excitement when, as we approached No.34 in the car, we saw a Little Owl sheltering from the wind in the cavity of the nest tree. It absolutely made our day. These next two were taken at a distance, from the road. 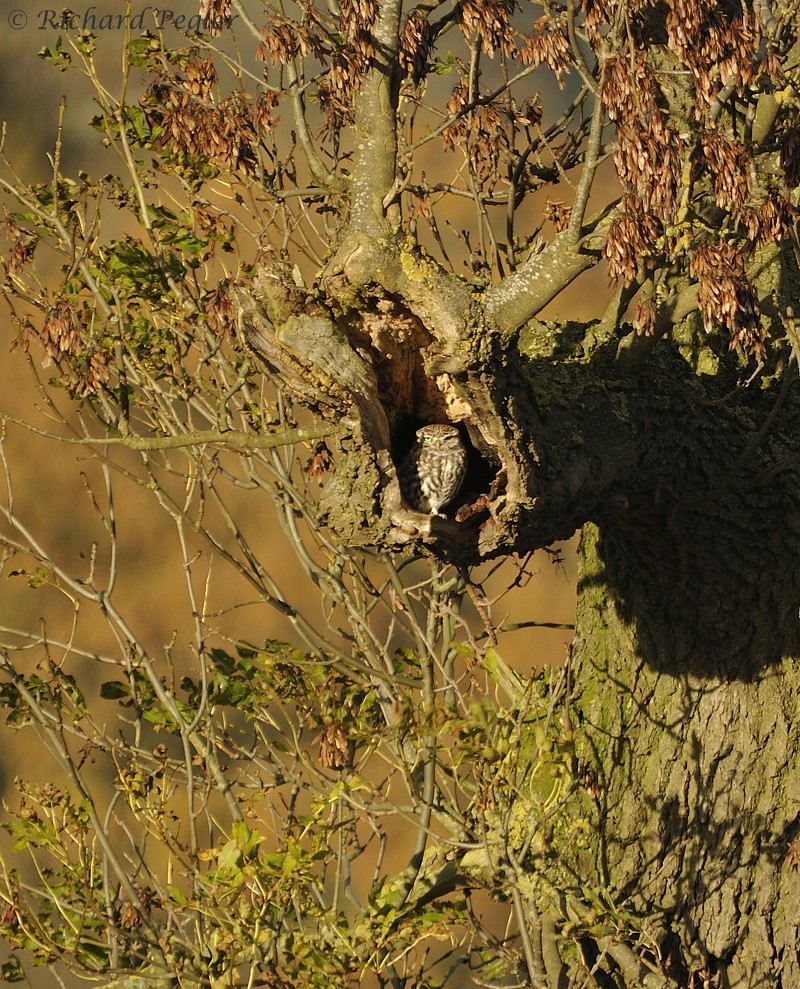 OK, so this might not be a high volume of sightings, but they are some of the most heart-warming I've had for a long while. Let's hope that this continues.
Posted by Richard Pegler at 10:40