Whixall Moss - on Tuesday 23rd May

I'd been looking for an opportunity to go back to Whixall Moss on the Shropshire/Wales border. However, if the visit was going to be any use to me it had to be fine weather, otherwise the dragonflies would be hard to find. On this particular day, the weather forecast looked reasonable, so I took the decision to forgo Tai Chi and go west.

On my way there, the weather changed from relatively pleasant to overcast with threatening dark clouds. I nearly turned back. I'm pleased to say that I persevered and when I was about three quarters of the way there it brightened up a little.

It's approximately a three hour cross country run in the car for me to get to Whixall Moss. Sadly, however, there were traffic issues and my journey took nearly three and a half hours, with me arriving at around 10h30.

I was a little concerned on arrival to find two bus-loads of children had been disgorged into the car park, but was somewhat relieved when told that they would not be going to the area I was going to head for.

Worryingly, it was still cloudy (but bright) and rather breezy. I unloaded The Beast (my recently constructed all-purpose box on wheels) from the car and set off.

Although the moss covers a large area, there was a very specific location that I was headed for which, allowing for distractions on the way, would take about half an hour to reach.

I'd not gone far before I started seeing a few damselflies. I didn't take too much notice of these as my mission was to find my first dragonfly of the year - things have been very slow in this respect, close to my home. Anyway, here's a damselfly from then to be going on with.

There were also several Green Hairstreak butterflies along the way. This one didn't exhibit the tendency that I've previously noticed with this species, which is to turn side-on when approached head-on.

I saw a couple of dragonflies whilst I was walking, but I was on a tree-lined ride and the light was low and each time I just saw them momentarily as 'small and dark' before I lost them again. I suspect that these were White-faced Darters.

Confirmation that I was on the right track came in the form of this pleasant sign-board.

As soon as I arrived, I knew that things were probably going to be difficult. There was a good breeze blowing which wasn't going to help the close-up photography as things would be blowing about, in and out of focus and even in and out of frame! There was also a distinct lack of sun.

However, my first dragonfly of the year that I was able to positively identify was a White-faced Darter (not bad for an extremely localised species which some would consider rare). This was the one:-

This particular individual used this stick, just above the water, as his territorial base. It was about 5 metres away from me. Occasionally he'd fly further away, and then come back to the same stick. I needed to find a specimen that I could get nearer to.

My main interest was to try and find some female White-faced Darters. On my previous visit, last year, I'd only managed to  find males, a few teneral females, and females that were tied up mating. As females will tend to roost in trees and bushes I started looking in such places - unsuccessfully! I did find this caterpillar, which I believe is of the Yellow-tail Moth.

Last year, the male WFDs that I saw were either settling on the duckboards round the bog, or on patches of short ground vegetation. The former doesn't look very natural in an image, and the latter gives a somewhat cluttered background, as shown in the next image.

I was, therefore, rather pleased this time to get a few opportunities to photograph them clinging to sticks.

It's now time for the arachnophobes to look away! A couple of times this Raft Spider made its way across the open water. It struck me as being a rather magnificent-looking creature, even if it didn't look at all friendly! 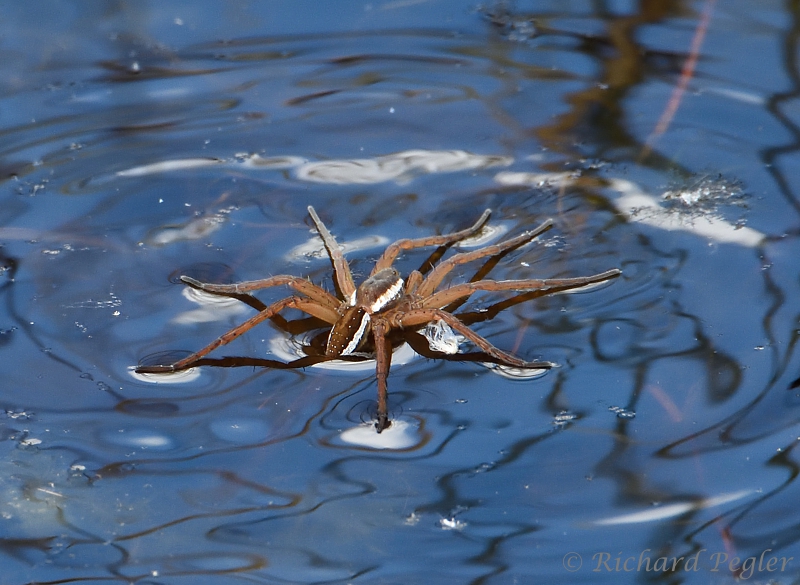 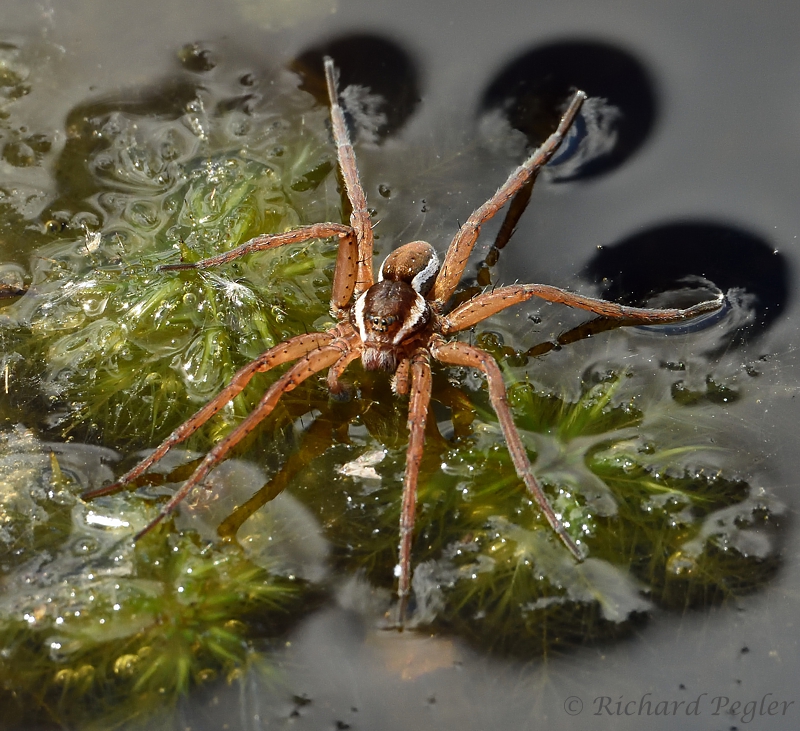 These spiders are described as 'scarce' and are one of the two largest spiders in UK. They detect their prey by feeling the movement of the surface-tension on the water and can then run across water to catch their victims. They are also known as the Jesus Spider because of this ability (walking on water - not running after victims!).

My attempts to photograph a female WFD came to virtually nothing.  A couple of times a female had a brief spell of ovipositing - flicking her eggs into the water. However, I only managed a blurred shot.

About half-way through the session the sun came out, shortly and the action increased somewhat. A pair of WFDs started mating and landed in the grass, but I could not get a decent image for love nor money. This was the best I could do - you would probably not notice the female in the image at first glance!

I started to take notice of some of the other dragonflies and damselflies that were in the area. The most noticeable were the Four-spotted Chasers. At first these refused to settle anywhere. However, after an hour or so they started to oblige to a degree - sadly, never near to me, so these are both with the lens at 500 mm. 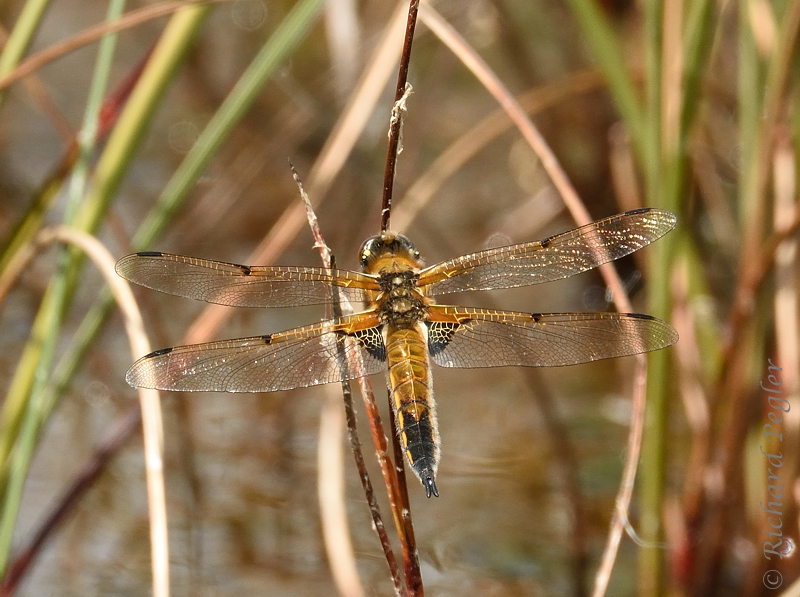 A female Four-spot started ovipositing by dipping her rear end into the water. I missed the dip, but got this poor shot.

Suddenly, a male coupled up with her, and I did manage to get a record of their copulation in mid-flight. 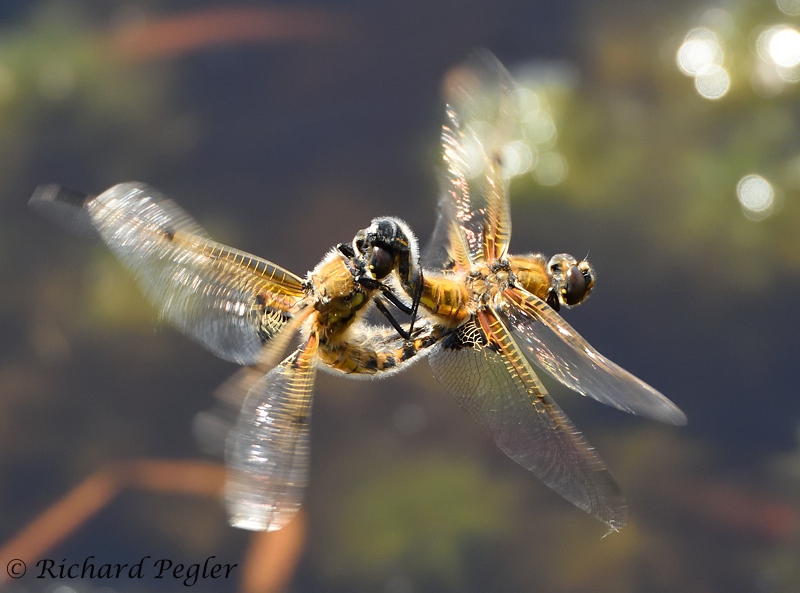 Shortly after this session I had a bit of an odd turn, and had to sit down quietly for half an hour. It was after this that I noticed a teneral female WFD that had developed unseen by me, and was almost ready to fly. I kicked myself for missing this sequence. You can see the exuvia behind its right wings.

I did take some shots of the damselflies whilst at this spot. Here are a couple.

It is only when looking at my photos that I noticed something that I've never seen before in a dragonfly. In the image below, the male Four-spotted Chaser seems to have something akin to a penis under the outer end of its abdomen. This does not relate to my understanding of the sexual organs of dragonflies which are unusual and complex to say the least! Any suggestions (no rude ones, please) would be appreciated.

I took many more shots of male White-faced Darters, so here are a few more images. 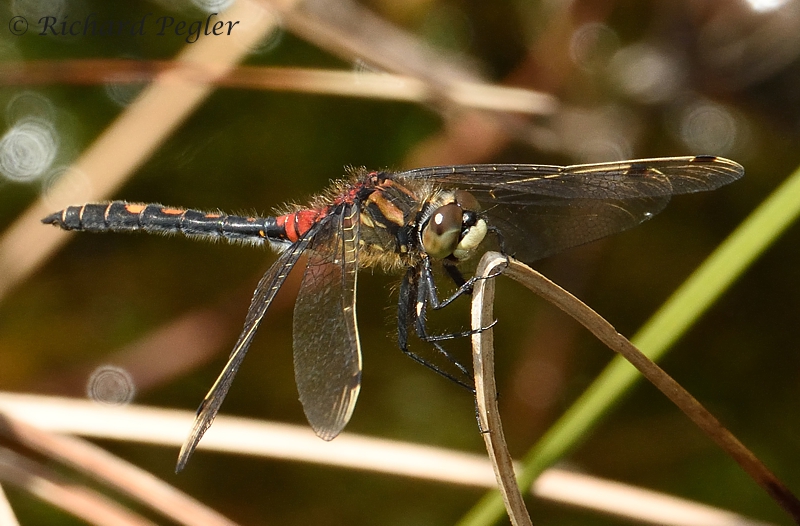 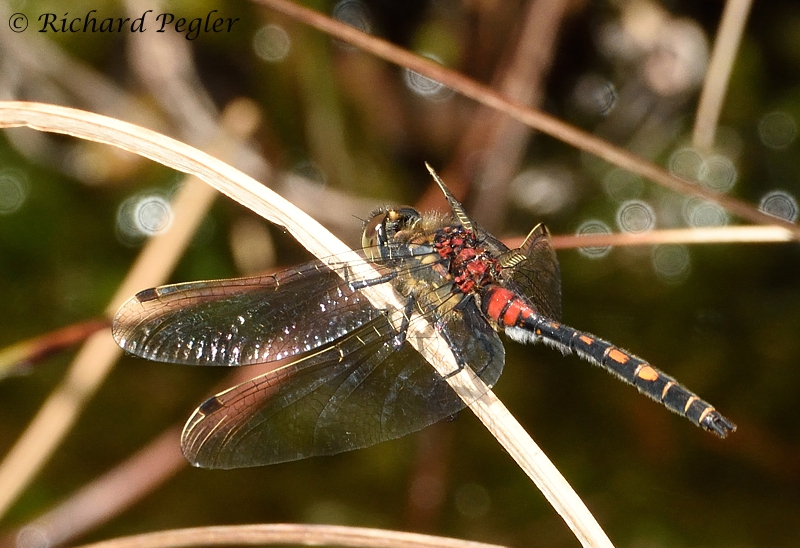 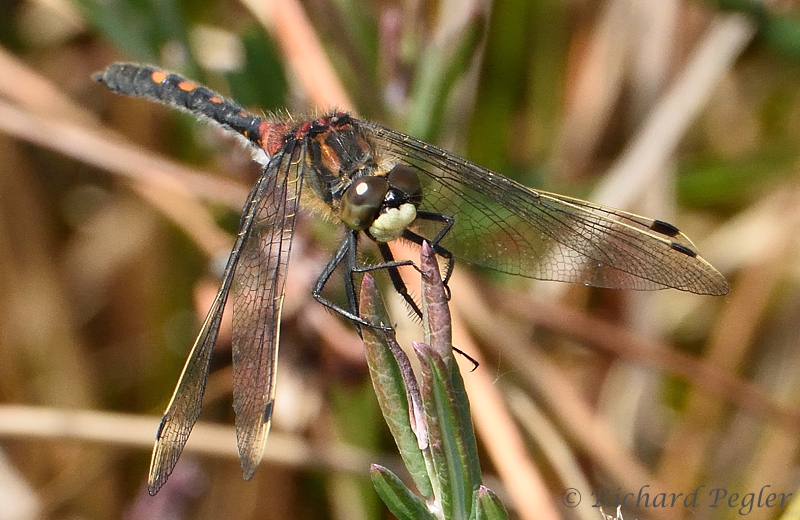 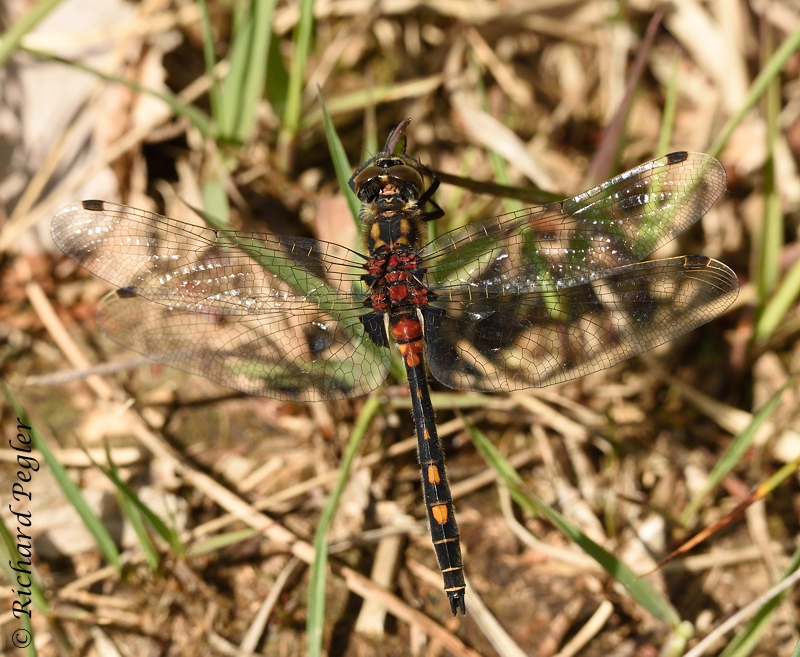 The session was starting to take its toll on me, and I felt that I'd done enough so started back towards my car. At one point I stopped to take a rest and noticed some action in a wet area beside the path. This gave me my final photos of the day, although my head wasn't working correctly and they were taken with the camera on inappropriate settings. Shucks!

It was only when I got the images on my computer that I noticed the damselfly exuvia under the dragonfly in this next image!

I had some last shots of WFD too. 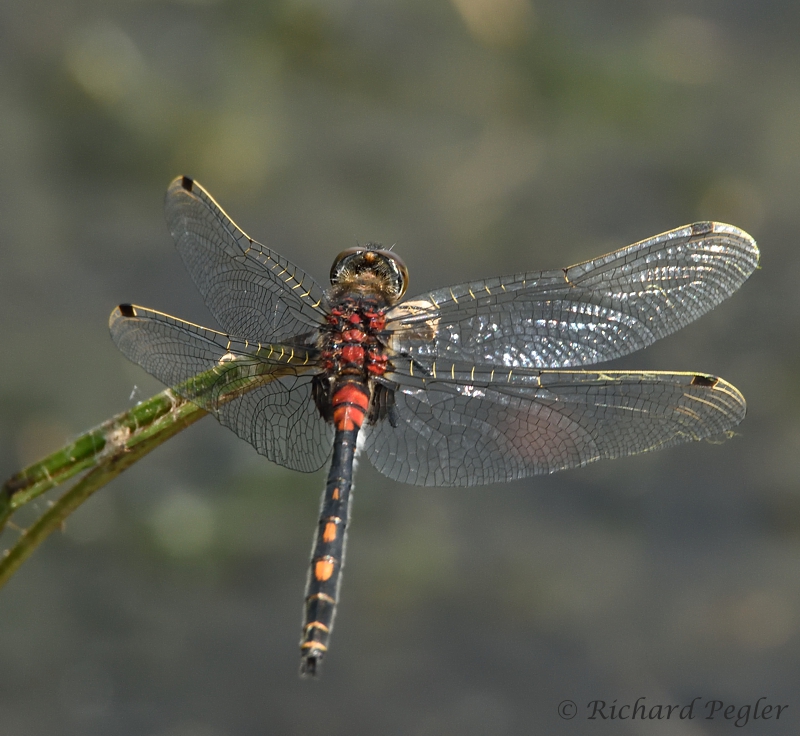 It had been relatively breezy all the time, but when a freak sudden short gust which must have been at about 100 miles per hour (160 kph) ripped through and tore the dragonfly from its perch and nearly threw me into the water it really was time to go.

I'd had a great time, which would have been even better with a bit more sun and without the breeze. I hope to return again later in the summer. The WFDs will not still be there, but who knows what I might find!

Thank you for dropping by. I suspect that the next post will be a short one - but no promises!
Posted by Richard Pegler at 19:30