I'm still in catchup mode and, like my previous post, this post also features one of the excellent walks led by Sarah Proud, for the benefit of volunteers at Rutland Water, which took place just one week later.

Never having been to Fermyn Woods before, and them being roughly 65 miles (105 km) from my home, I left home rather early, not knowing what sort of traffic I might meet on a Friday morning. In the event, I arrived an hour early and did a little pre-visit investigation.

Within a very short time I'd found a White Admiral. This was one of the target species for the day, and a 'lifer' for me. Sadly, the specimen I saw had a chunk out of one of its hindwings. I initially thought that this was probably a male because the forewings seemed relatively pointed. However, I now suspect that it was a female, having looked at Richard Lewington's illustration.

I wandered around for a while, only seeing a Silver-washed Fritillary during my travels - but it was quite early in the day. It was time to head back to meet the rest of the group at the arranged time. However, after around 15 minutes, I realised that I'd taken a wrong turn somewhere! I couldn't relocate the route I'd been on and, eventually, had to resort to heading northwards in the knowledge that I should end up at some time at a tarmac road. I did this at a trot, found the road and, to my relief, found I was only a couple of hundred metres from where I needed to be. I arrived just in time, but rather overheated in mind and body.

With the group assembled, we entered the woods, and were soon having another of our target species pointed out to us - Purple Emperor (Apatura iris). Frustratingly, these were all high up in the canopy and, although readily identifiable, were totally impossible to photograph. This proved to be the situation for the rest of the visit, so I will not return to this subject.

Soon we were looking at White Admiral again. This one was also not in perfect condition. As we were in a group, I had to hold back somewhat from close-up photography. The underside of this species is, to my mind, even more attractive than the upperside, although I failed to get a good image to show this. I think that this was probably also a female. 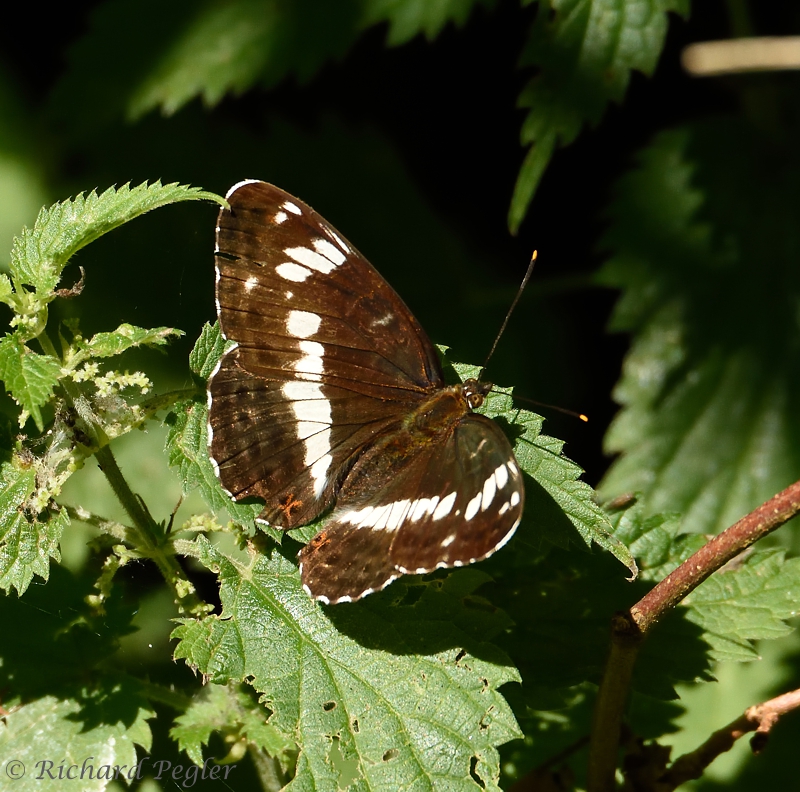 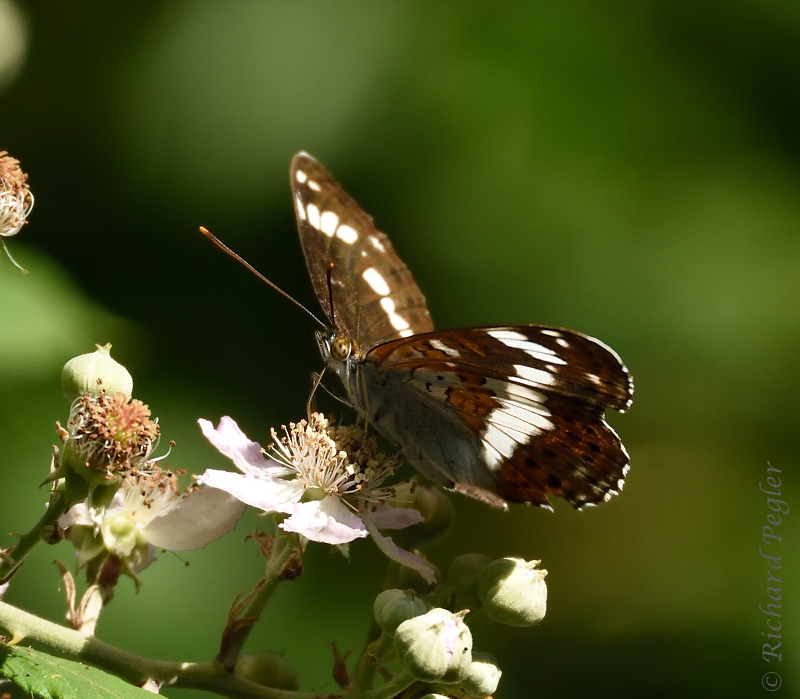 In the same area as the White Admiral, there was a Silver-washed Fritillary.

There were some of the more common (sorry, but I just can't bring myself to use the word 'commoner' in this context) butterflies around, including Speckled Wood and Comma. Here's one of a Comma conveniently showing how it got both its common and scientific names.

At one point, Sarah spent some time looking pensively through her binoculars at something up in a tree. Eventually she announced that she'd found a Purple Hairstreak. There was a debate as to whether or not this was a recently emerged butterfly as its wings appeared to be not fully unfurled. This matter was not resolved at the time, but I can see from my images that, although the wings are deformed, the butterfly looks somewhat battered. I'm suggesting that this was an old butterfly that had wings that had never fully unfurled. 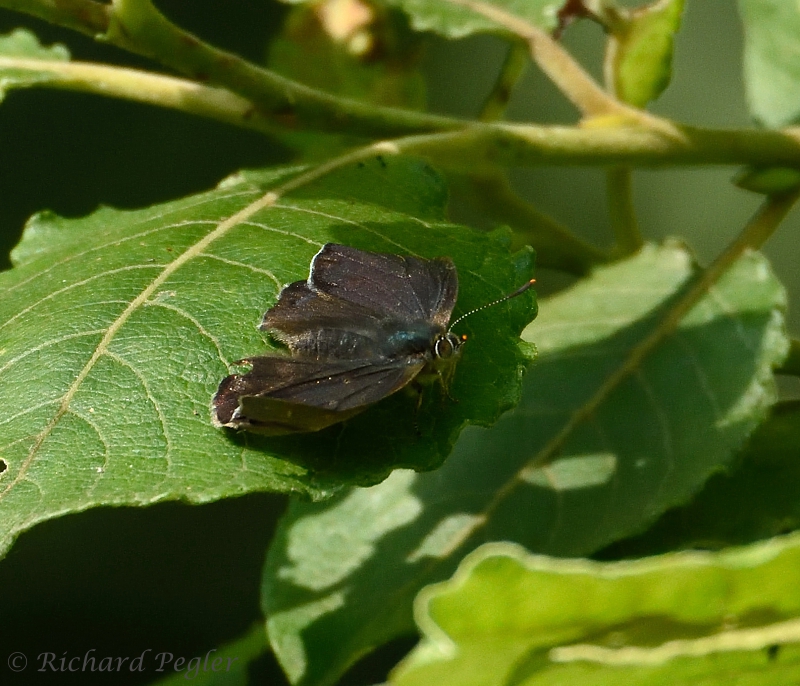 After this, we headed out of the woods and into agricultural land in the hope of finding Black Hairstreak. We were unsuccessful, but there were several Southern Hawker dragonflies distantly patrolling over the cereal crop in the fields adjacent to the path that we were on. As we returned to the wood, to enter by a different track, we came across several Silver-washed Fritillary, including a pair that were mating. 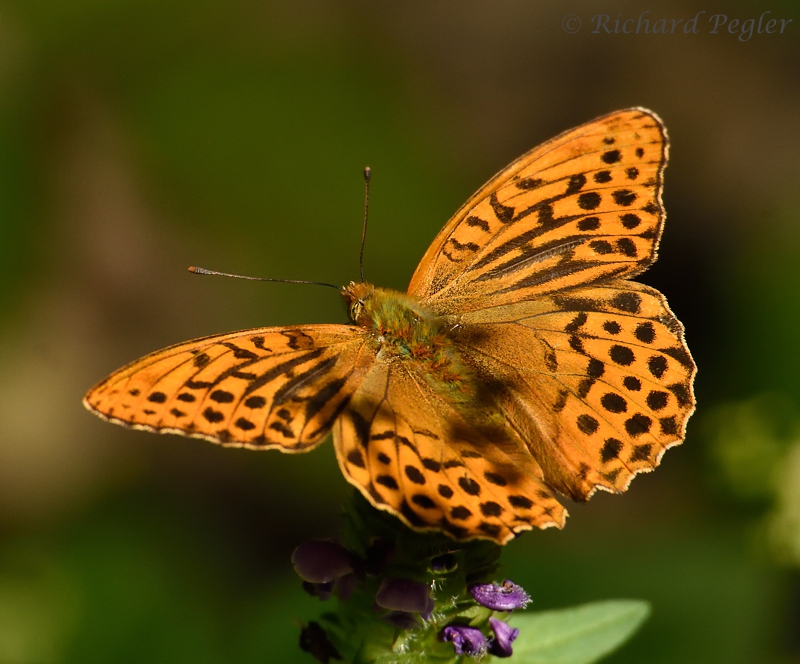 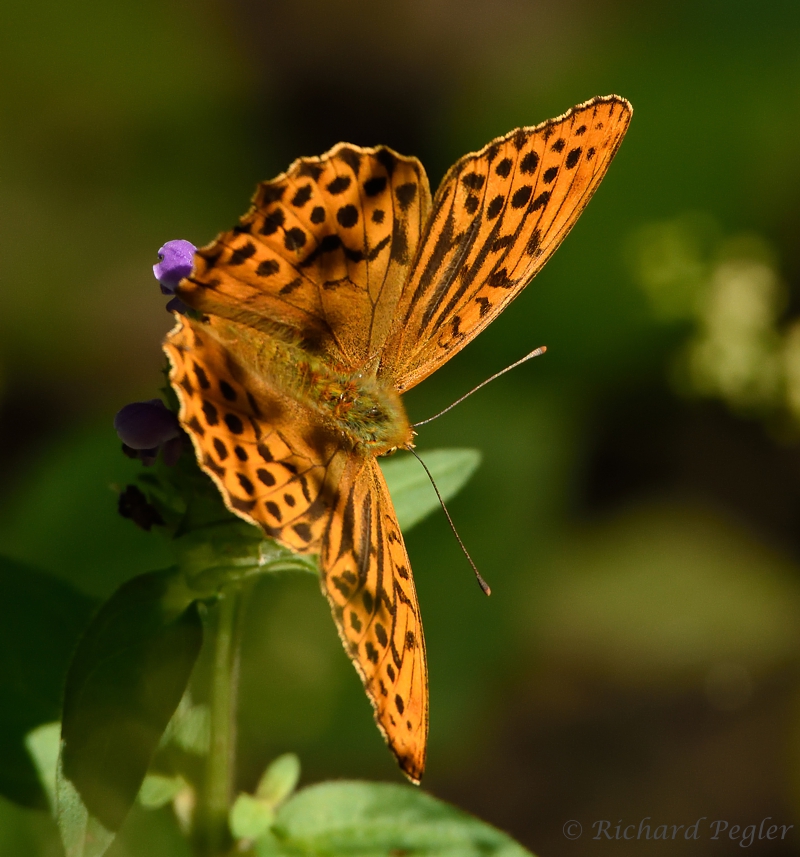 Shortly before the end of the walk I spotted another Purple Hairstreak, but most of the rest of the group had gone on ahead, so not everyone saw it. This one was also in poor condition, but I did manage to get a shot which more clearly shows its underwing markings. I don't like to publish such poor images, but it's an absolute rarity for me to see this species - only once before in my life! 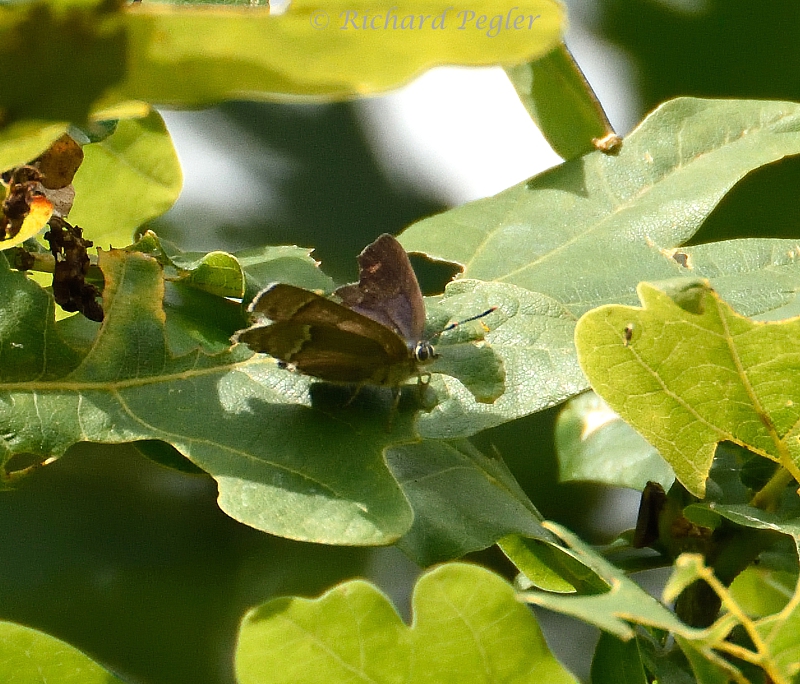 As we left the woods and returned to our cars, a Red Kite was flying in the distance. These birds are now rather common in this area, after a successful reintroduction programme.

After the group dispersed, I set off in my car to look at another part of the woods which is accessed from the visitor centre. Unfortunately, they'd had a problem with the parking ticket machines here. This resulted in having to walk the 200 metres from car to cafe to buy a ticket and then the 200 metres back to the car to put the ticket in the window - a bit of an inconvenience.

My main objective here was to locate the ponds that were shown on the site plan that is in the site's brochure, and try and find some dragonflies. Because the site plan didn't bear to much relationship to the actuality, and the signage was minimal it took a while to locate what I now believe to be the only accessible pond.

Whilst searching, I took a shot of a Magpie which I'm quite pleased with. It departed at speed as soon as it saw me!

By the time I found the pond, it was turning cloudy and breezy. There were a few moments of sunshine when a few damselflies and dragonflies appeared, and I took advantage of these as best I could. 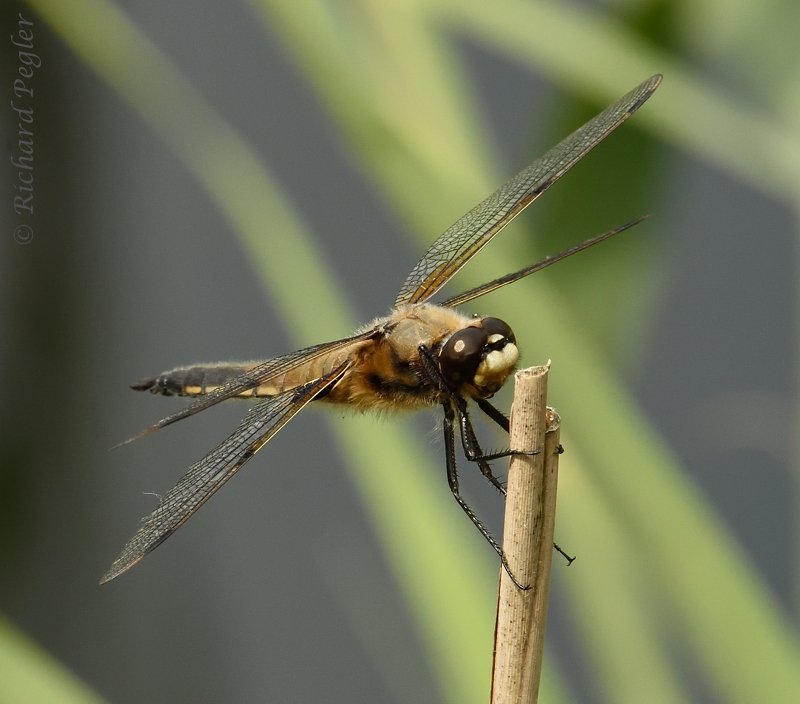 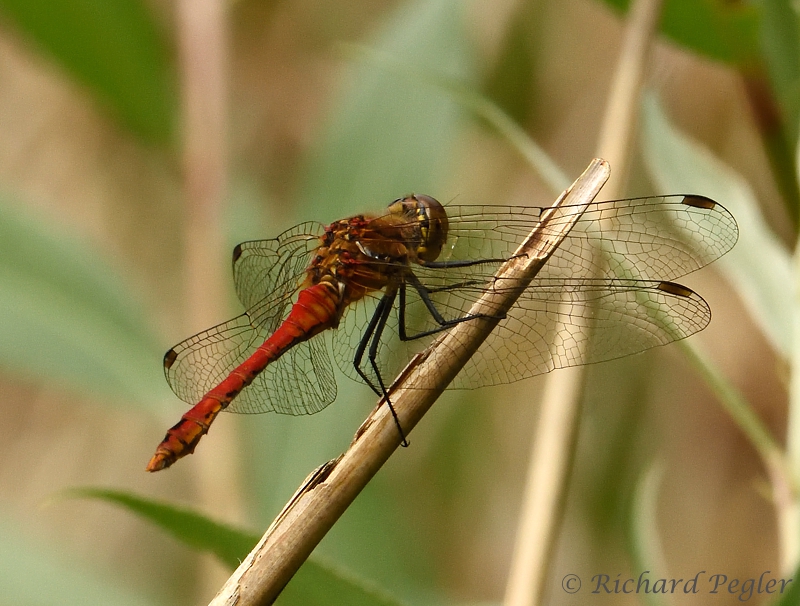 When the cloud looked as if it was going to be continuous, I gave up at the pond and did a little more exploration. In spite of the lack of sun, Gatekeepers were still around.

Being weary by now, I decided to head homeward. It had brightened up a bit by the time I reached Launde Abbey so I stopped at the very small pond by the road junction here as I'd seen dragonflies on previous visits.

On arrival I saw Black-tailed Skimmer, Broad-bodied Chaser, and Emperor dragonflies. There were also plenty of Common blue Damselflies around. I didn't do at all well with the photography, and it got dull again ten minutes after my arrival and the dragonflies disappeared over the horizon.

I wish I'd got a closer and better focused image of this next one as it reminds me of an approaching fighter aircraft.

I didn't manage any sensible images of the Emperor, and my attempt to get a record of my first sighting of mating Broad-bodied Chaser resulted in a very poor shot, but I include it here for the record.

After this it was time to head home.

I take this opportunity to thank Sarah Proud once again for yet another splendid Butterfly Walk.

Thank you for dropping by. I suspect that, unless something else crops up, my next post will also feature dragons and butterflies.
Posted by Richard Pegler at 20:00