On 25th May, I had paid a visit to the lake at Heather and been impressed by the number of damselflies (Azure, Common Blue, and Blue-tailed) and Four-spotted Chaser dragonflies that were there. I resolved to return at various stages during the season. My next visit, however, wasn't until 21st June.

As I approached, I found that there were large numbers of Ringlet butterfly along the edges of the meadow.

Reaching the lake, it was immediately apparent that there were good numbers of male Emperor dragonfly around. These - one of the two largest of British dragonflies - were hard to miss!

There were, perhaps, too many of them as they were extremely active and almost permanently engaged in feuds over territory with their own species and with the Four-spotted Chasers. I only saw three perch, and two of them were in extremely poor condition. This first one was rather too distant for a detailed shot.

I'd already taken a couple of shots of the next one before I noticed that it had lost a complete wing! This was disappointing as it was very confiding.

The third one looked to be relatively intact, but insisted on playing hide-and-seek with me - I'd have had to wade out into the lake to get round to the other side of it.

There were plenty of Common Blue Damselflies around, including numerous mating pairs.

The Four-spotted Chasers were just as aggressive as the Emperors, but seemed to be weathering their encounters somewhat better than them.

If there's ever a competition for the photo with the most exuvia on one stem, I might enter the first image - and I was so intent on photographing the dragonfly that I didn't even notice at the time. If I had have done, I might have got even more than the six that are visible in the image! 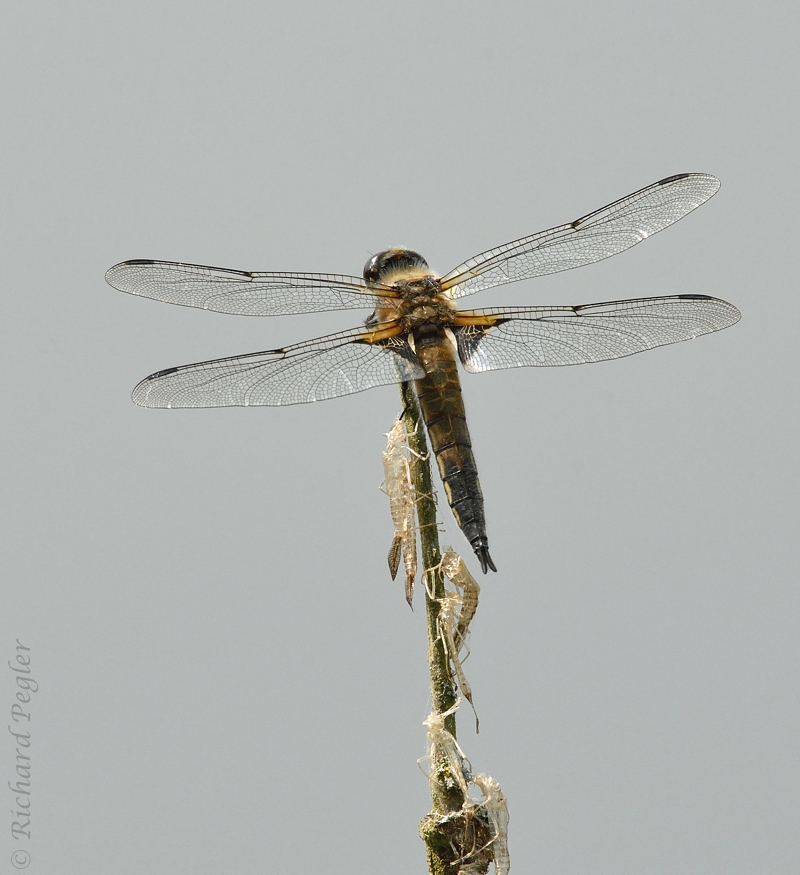 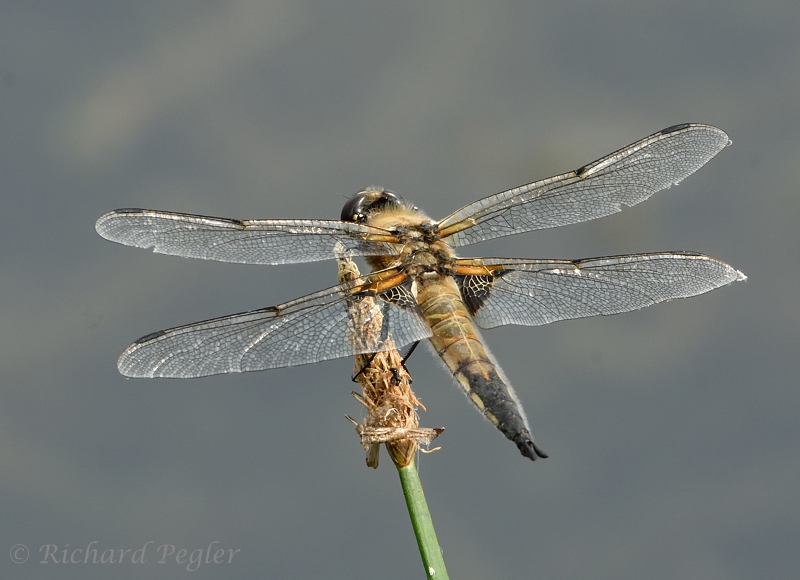 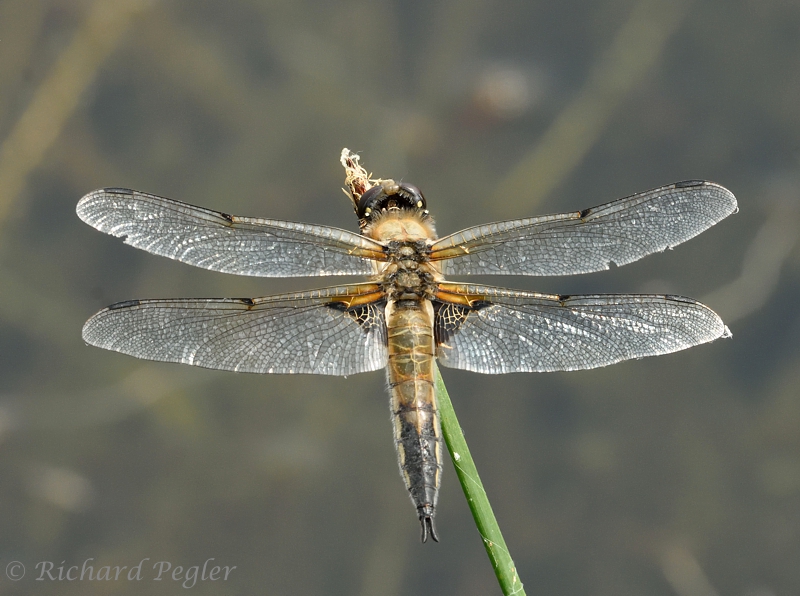 Immediately after taking that last photo, I went round to the other side of the bush that I was standing beside, and sent a Hobby flying off into the distance. I only managed a retreating shot, but it appears that it was a juvenile. This bird was possibly responsible for that Emperor losing a whole wing!

One of the most interesting sightings for me was a lone Black-tailed Skimmer near the south end of the lake. Whilst by no means a rare dragonfly, I don't see that many of these. 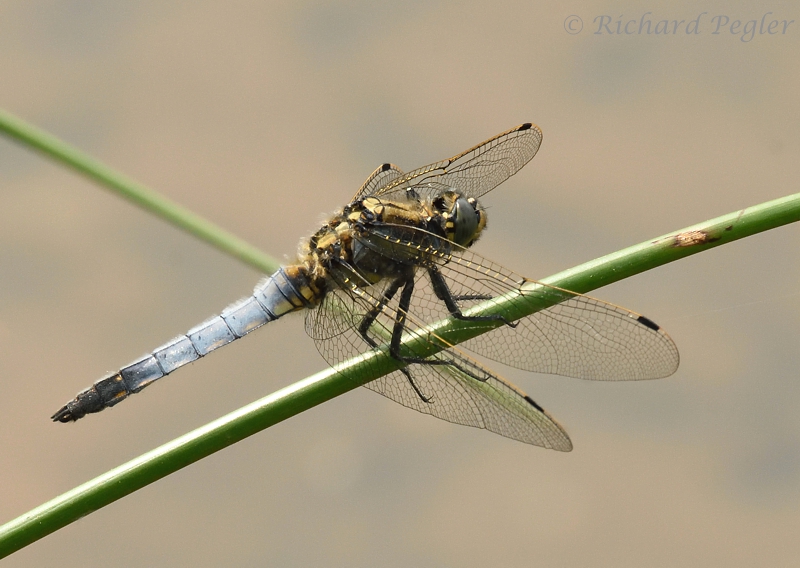 From the west side of the lake I was able to observe a female Emperor ovipositing. 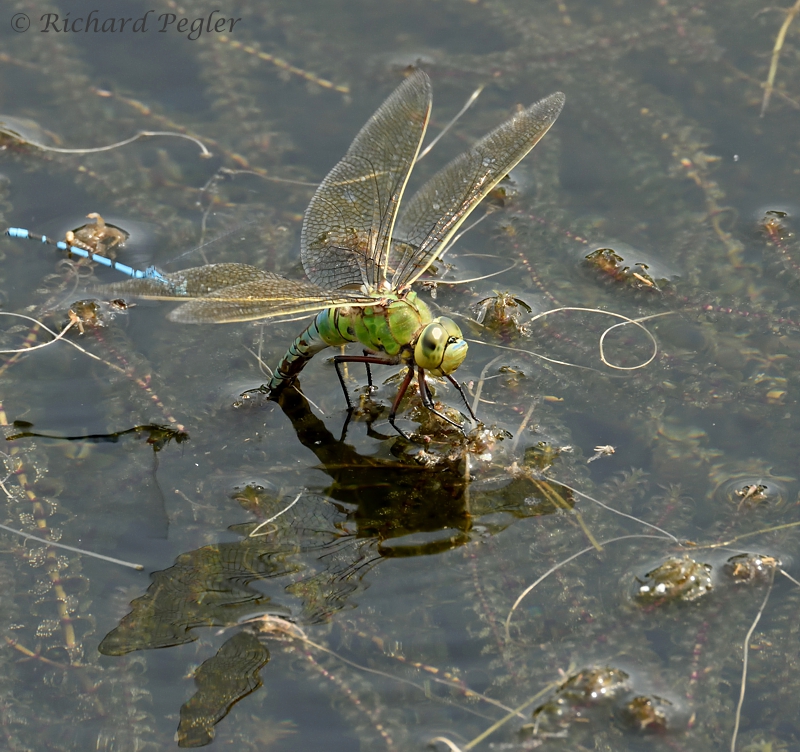 As I was about to leave, I noticed an Emperor exuvia which I photographed in-situ before retrieving it. It now sits in a pot in my study.

Two weeks later I was back again. This time there were even more Emperor dragonflies in evidence.

Strangely, an Emperor exuvia was the first thing I photographed this time!

Some of the male Emperors were settling and, fortunately, many of these were in better shape than those on my previous visit - but not all of them!. 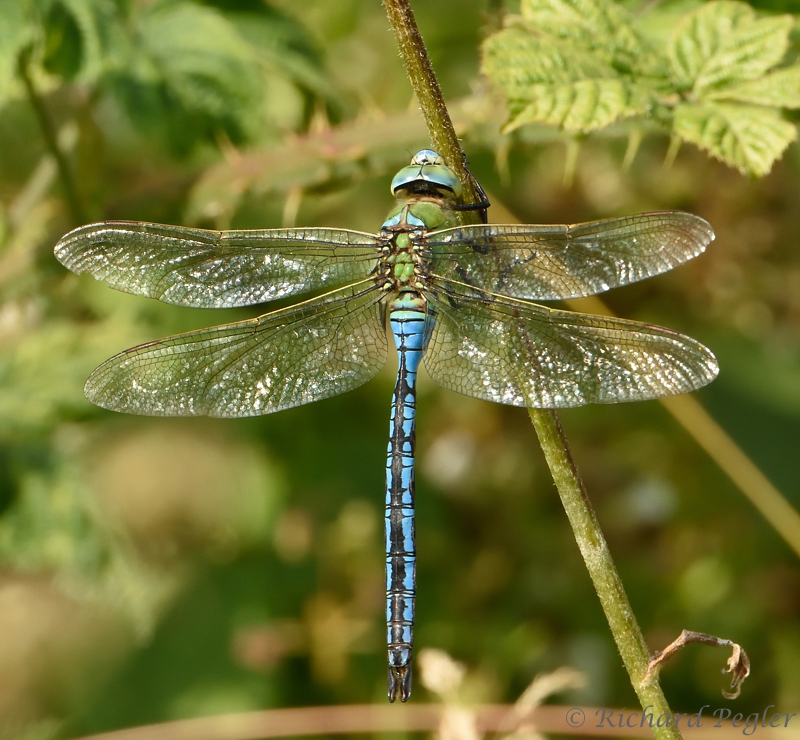 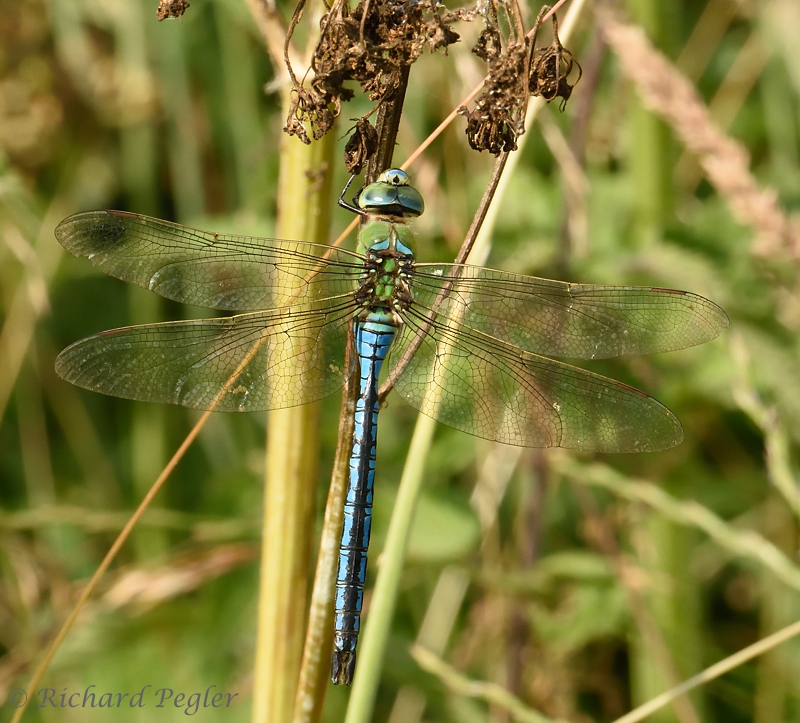 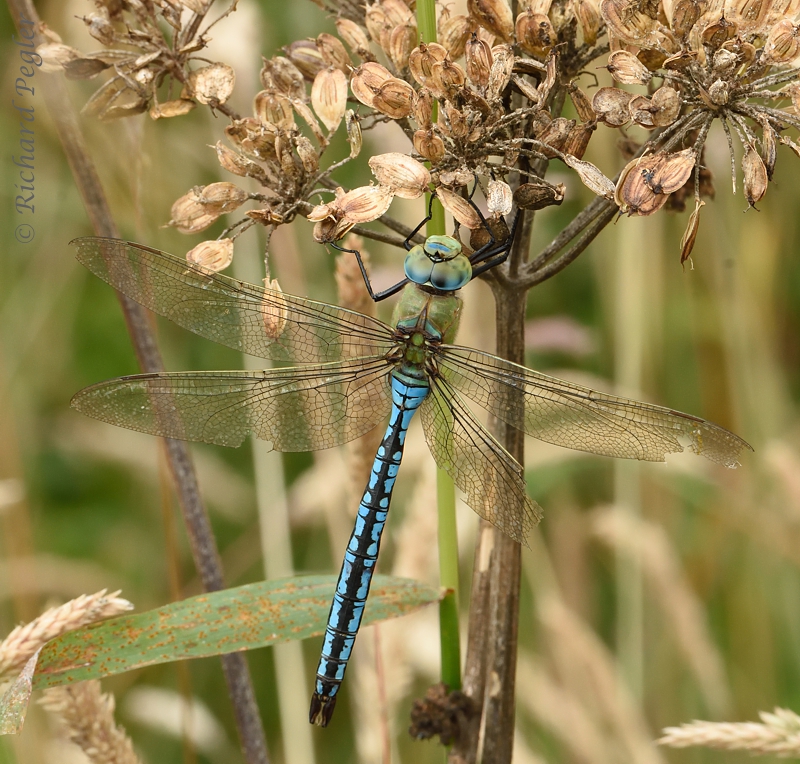 I spent a short while trying to get flight shots, but the high foliage at the edge of the lake kept getting in the way. This was the best I could manage. Although it's a terrible, shot it amuses me as it reminds me of looking up at a helicopter.

There were many Common Blue Damselflies around, as can be seen in this next image.

I don't see many of the blue form of the female Common Blue, so was pleased to get this pair in tandem.

There was plenty of mating going on on this occasion too.

Four-spotted Chasers were still around, though not quite as numerous as on my previous visit. 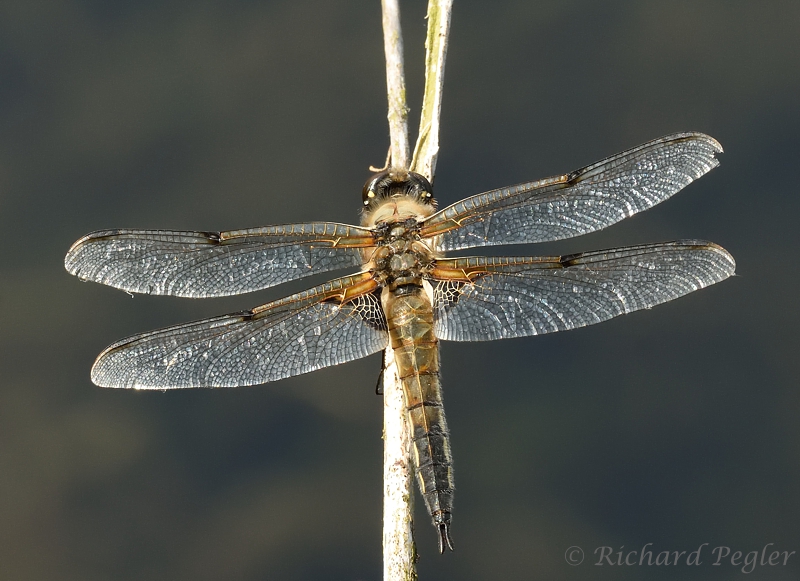 The female Emperors were ovipositing again.

The real highlight of the day for me, however, was getting my first ever shot of a mating pair of Emperors!

I recently returned to Heather Lake. The weather was not ideal, and I only saw four dragonflies during a two-hour search - it seemed very strange! Any disappointment was added to by finding that I'd managed to step in a large pile of dog dirt hidden in the long grass. Cleaning this from deeply treaded soles of my boot was not a pleasant task.

Thank you for dropping by - I suspect that my next post will feature butterflies, but I've still got a lot of catching up to do.