When Everything Comes Together - mid-March, 2018

Some of you will be aware that I was on a family holiday to the Isles of Scilly in the middle of March. I also know that a few of you are aware that I had one particularly exciting experience during that stay.

There's a build up to this story which will feature in a future post, when I have finished processing all the photos I took during the stay. Here, however, I'll cut to the chase.

A report appeared on Birdguides saying that a Snowy Owl had been seen that day on Tresco, North End. I'd already had an unsuccessful attempt at this bird on the Tuesday, after it had been reported as being on Bryher. I made a quick check down at the harbour and found that, coincidentally, a St. Mary's Boatmens' boat was going to Tresco for the day the next day, departing at 10.15. What is more, a check of the local weather forecast revealed that there would be very cold conditions overnight with a chance of snow. It sounded tempting!

We woke up to a light covering of snow. I checked and found that the boat would drop off at Carn Near Quay at the southern tip of the island. This meant more than doubling the walk that I would have to get to the north end of the island compared with that from a drop-off at New Grimsby. I found the prospect of what I thought would be a six mile (9 km) walk, a significant part of which would be over rough terrain, a little daunting. It had been a long while since I had walked that distance, and I didn't have waterproof boots.

I went out to take some photos in the snow behind the property, and came back just as the snow started falling really heavily. I returned to find an email from Bob Dawson informing me of the owl, and of the boat times. Happily, my wife and daughter both encouraged me to 'go for it' and, with iron rations in my pocket, I set off.

On the boat, I noted one other person with binoculars. This turned out to be a local nature lover and teacher, Nigel Bray, who was going over to Tresco to do some work at North End in connection with a school trip the following week, but who also intended to look for the owl.

We took a circuitous walk to North End and spent some time searching. We'd given up, and said our goodbyes as Nigel needed to continue with his work, and I was taking some landscape images when Nigel shouted from about 100 metres down the path as the Snowy Owl flew across in front of him.

More details will be in my account of the full trip to the Scillies in a week or two.

Coming up to date

Having had a more than encouraging response to one of my Snowy Owl images that I posted on Twitter, I decided to submit one to Birdguides a week ago. Yesterday I was notified that I'd got POTW (Photo of the Week).  This also is something that I'd dreamed of achieving one day.

My extremely grateful thanks to Bob Dawson for his encouragement, to Nigel Bray for spotting the bird, to all the lovely people who have made kind comments about my Snowy Owl photo, and to Steve Young at Birdguides for his citation, my reaction to which was much the same as my reaction was after seeing and photographing the bird - frequent chuckles interspersed with holding back tears of joy!

Author: Steve Young
Comment: A Snowy Owl posing nicely on what looks to be the Arctic tundra in the heart of winter takes this week's winning spot ... apart from this striking image was actually taken by Richard Pegler on Tresco, Isles of Scilly, in mid-March! Snow on Scilly is rare enough, perhaps even rarer than a Snowy Owl, and the two combined together have produced a unique image that will stand the test of time.

This is a truly lovely photo. The owl has assumed a nice pose and appears relaxed, with the head turned towards the camera, yellow eyes open but not alarmed. Exposure is spot on, with detail in the plumage and the landscape is perfect. One of those that I look at and think "I wish I'd taken that", particularly as both the owl and the snow would have been Scilly ticks for me! Congratulations to Richard on his winning image, taken with the 500 mm end of a 50-500mm zoom, at 1/640 th second, f11 on ISO640.

And here's the image (please 'click the pic' to see it at the size it was submitted at): 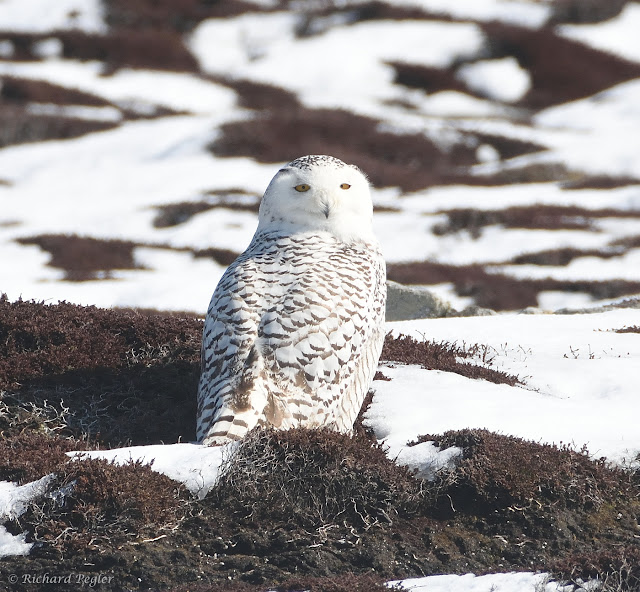 I hope that you will excuse me 'blowing my own trumpet', but I am rather excited. This will probably remain the absolute highlight of my wildlife photography efforts!


I should be back to normal for my next post!
Posted by Richard Pegler at 11:08