At the end of my last blog post which, again, featured the owls at a local site, I stated that this next post would probably have a different subject matter. Well it does and it doesn't! You're not, however, getting a post on my garden wildlife. Furthermore, the photographic content of this post is well below par!

A couple of weeks ago, I gave my talk 'The Little Owls of Leicestershire - and some that aren't so little' to a club relatively local to my home. This was a delightful group and, after the questions at the end, I was approached by one gentleman who said that he was hearing an owl from his house most nights, and occasionally seeing one in his garden. From his description, it was almost certainly a Tawny Owl that he was seeing and hearing. I was delighted when he very kindly invited me to visit him to have a look at the lie of the land and check out the area for the owl.

A visit was arranged for the afternoon of Monday 26th November, and the weather was in our favour. I arrived at around 15h30 and was shown round his land that surrounds his home. Whilst there was visibly great potential for owls and other wildlife there, no specific evidence was located by this recce.

While on site, there was a huge amount of noise from a massive housing development taking place down in the valley below. Bleeps from reversing vehicles, noisy machinery, the scream of cutting wheels, and bangs of various sorts, meant that if a Tawny Owl had called from beside our ears, I not sure we would have heard it! However, I was told not to worry as it would all finish when it got dark - and it did!

It seemed that it was almost immediately after the noise stopped that a Tawny Owl appeared, making a brief call before it arrived and settled in a tree, only about 40 metres in front of us. It stayed for a short while before heading down the meadow, chased by a Kestrel but, sadly, I did not see it look in our direction while it was in front of us. 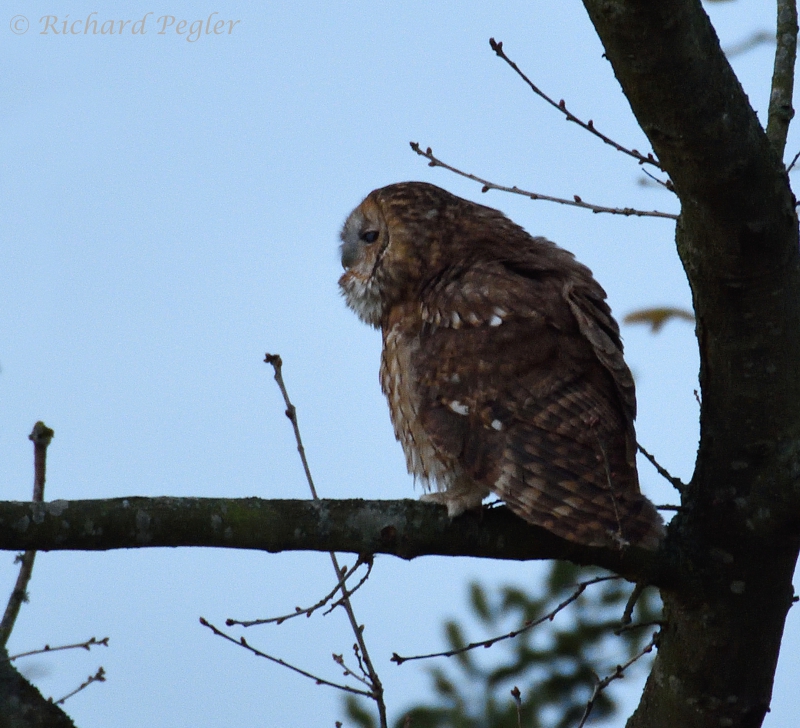 The Silver Birch tree it landed in at the bottom of the meadow was approximately 100 metres from our position, but it was in a very dark corner, and you'd never know it was there if you didn't know where to look. Indeed, if we took our eyes off it, it was a little difficult to find it again. I was, therefore, surprised that I managed to get any sort of shot at all! For the photographers amongst you, these were taken at ISO 5,000, 1/25 sec (handheld), lens at 500mm, with a exposure comp factor of -2.7 EV to try and keep the shutter speed up and impart some degree of actuality to the scene! 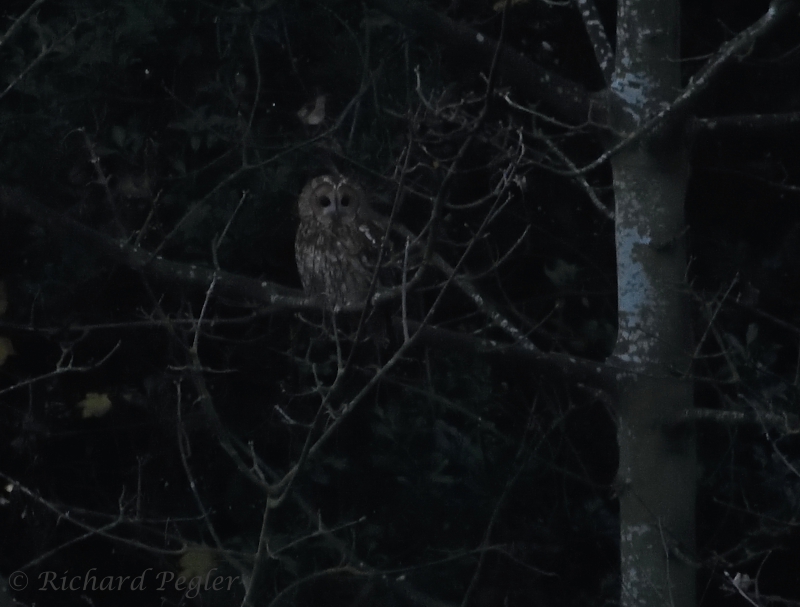 I guess it probably stayed in the tree for about 10 minutes, accompanied by loud protests from other birds, including a couple of Magpies that tried, unsuccessfully, to frighten it off. After a while, it departed into tall trees and was not spotted again.

I've been invited to return and will, hopefully be back in a couple of weeks or so. My thanks to my host for a most fabulously interesting evening. It's very rarely I get to see a Tawny Owl and it seems that, when I do, on too many occasions, it's roadkill.

Thank you for dropping by. I refuse to speculate on the subject of my next blog post - it depends on what turns up in the interim. With the weather forecast being as bad as it is, it might be very little!
Posted by Richard Pegler at 12:39