I seem to have spent most of my birding outings this month visiting the local site which has been hosting Short-eared Owls. On Monday I was in two minds as to whether to make another visit there, or try somewhere different for a change. The fact that I was feeling physically rather battered influenced my decision and resulted in me taking the option that involved a little less walking - I set off to Kelham Bridge. It's about twice the distance by car, but only about half the distance on foot once parked.

I entered the site and, as I turned the corner, I noticed a Kestrel fly into a tree in the hedgeline over on the far side of the field.

I looked in at the first hide, but there was little to see other than the tits on the feeders.

Walking along the path to the second hide, a confiding Robin posed for me, although it didn't position itself well for the light conditions!

On arrival at the second hide, I found four people there (three of whom I knew), and was told that a Kingfisher had been present but had just gone out of sight at the end of the lake. There was nothing else visible at that time, so we chatted amongst ourselves.

We didn't have to wait too long before the Kingfisher showed again at the far end of the lake. It was distant and quite mobile, and tended to land in places for which we didn't have a good viewpoint. The consensus, at the time, was that it was a male bird, but having looked at my images there is a definite reddish colouration to the base of the lower mandible, so I think it was a female. 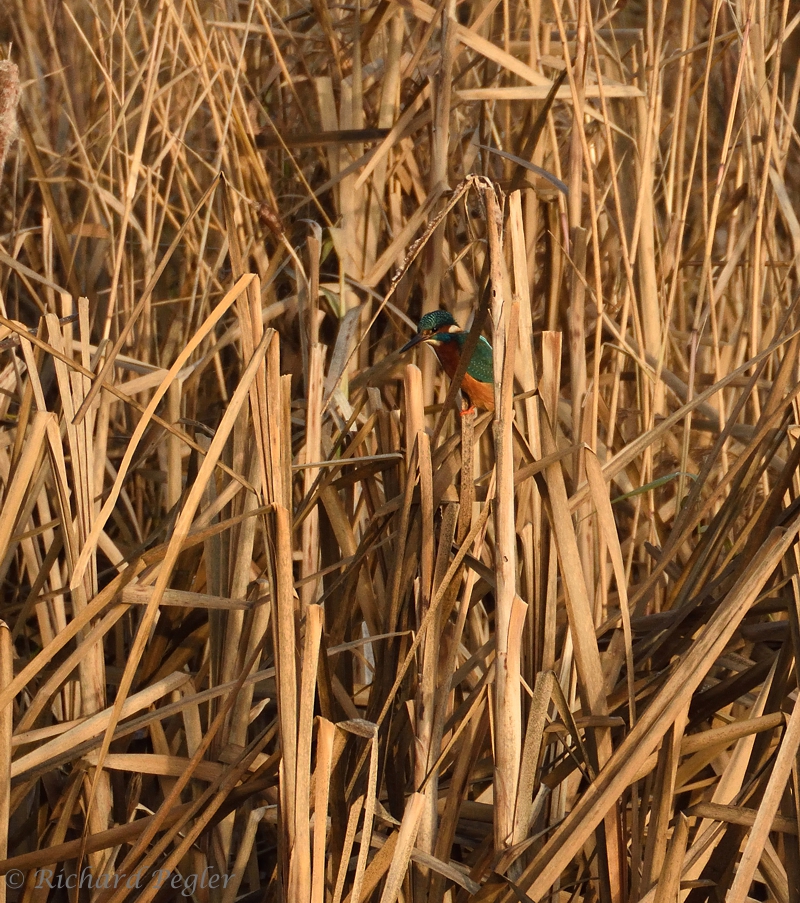 Bit by bit, it made its way towards us, but again often contriving to land in places with intervening foliage. 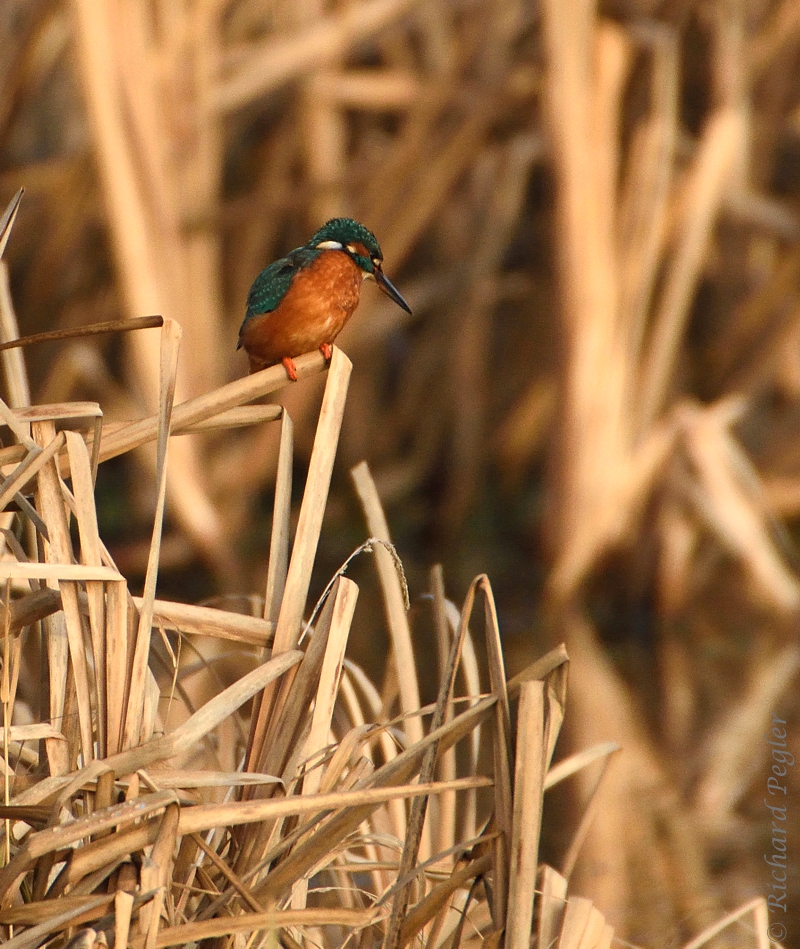 Eventually, it broke cover and came a little closer. 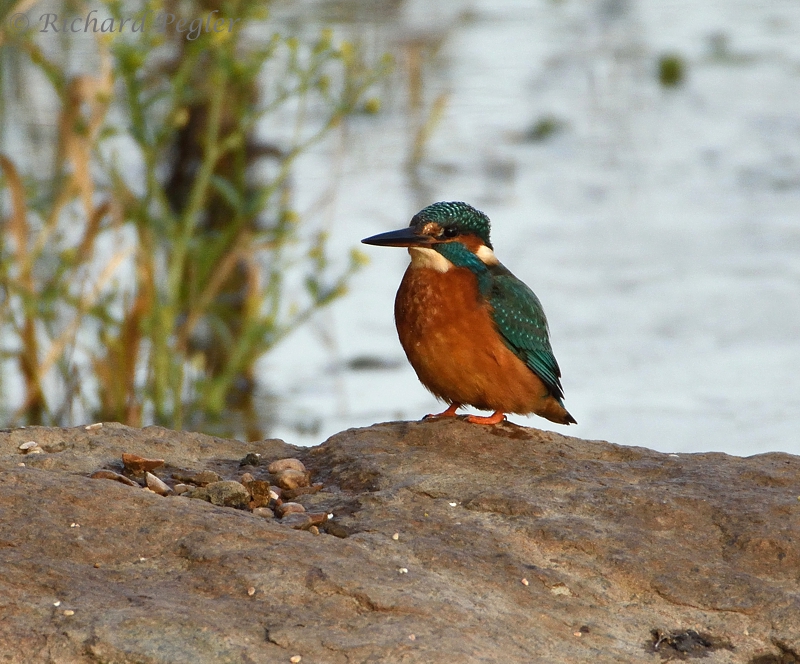 From this rock, it flew up into an adjacent willow tree and I accidentally got a (rather poor) flight shot. This was, however, enough to show me that, although quite bright for the time of year, the light levels were low enough that trying for further flight shots that day would probably be a waste of time - it was only about an hour before sunset.

The bird continued to come nearer. 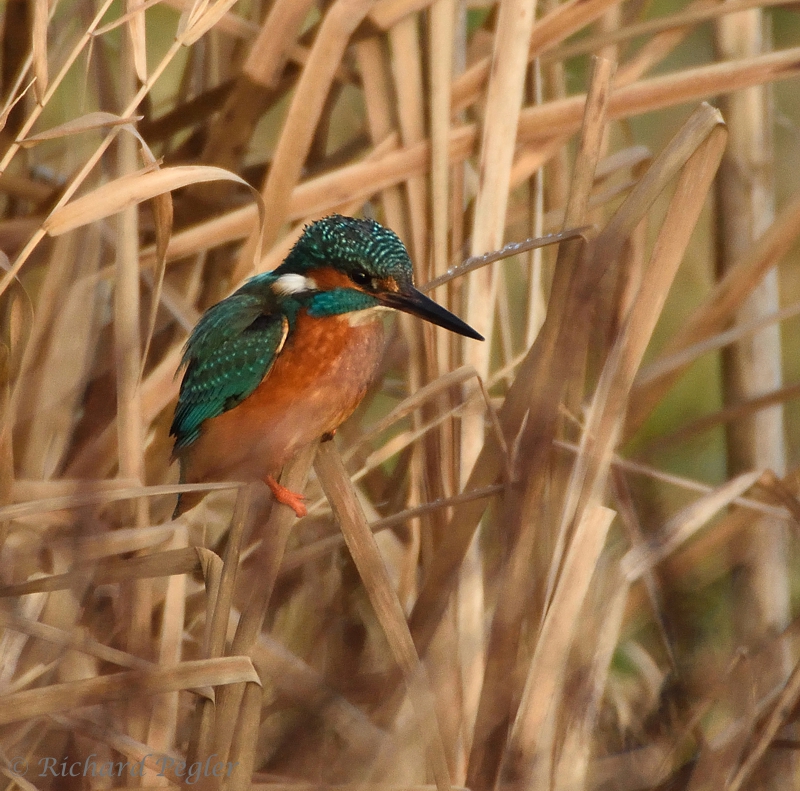 Then, Bingo! It landed on a stick in front of the hide, probably less than 8 metres away! 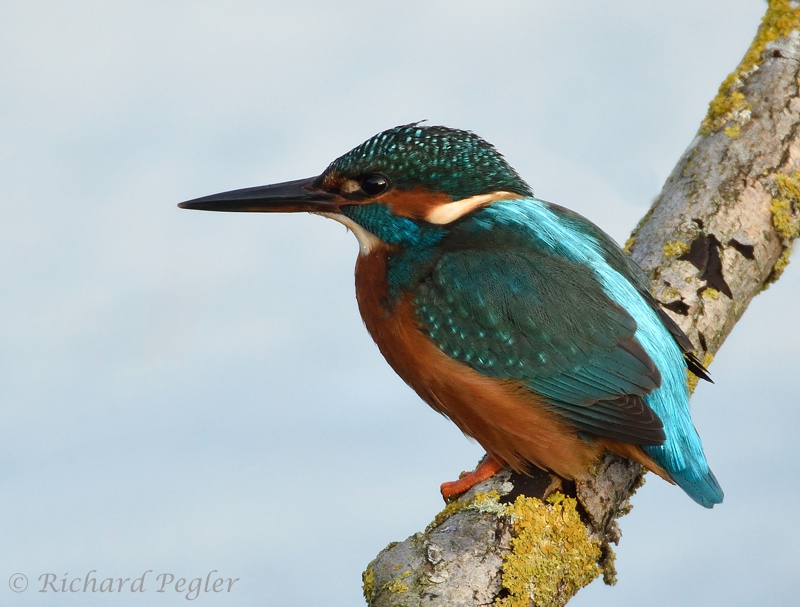 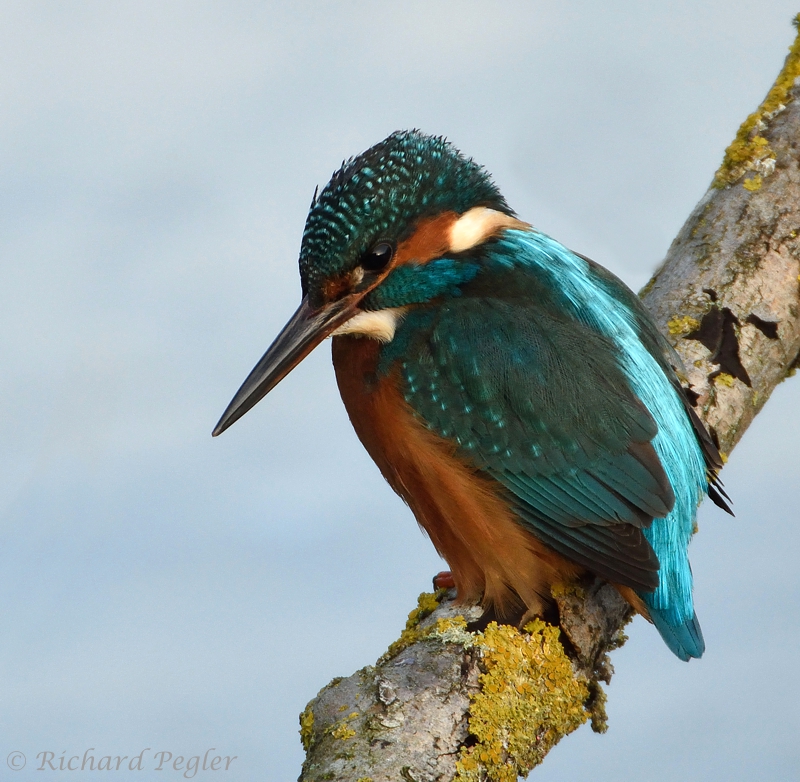 From this position, it flew to a different stick. 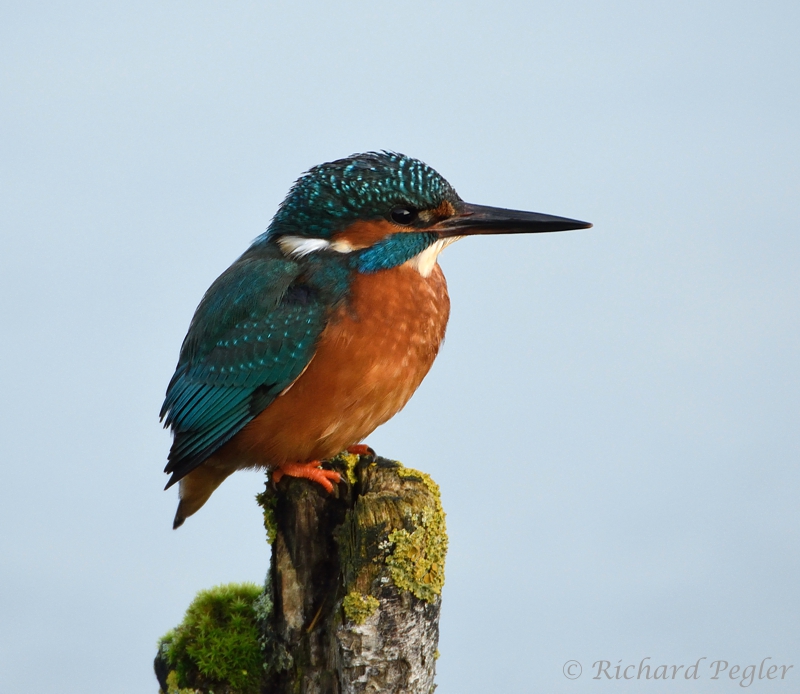 It then went back in the direction it had come from.

Another birder arrived and, after chatting for a while (mainly about sources of garden bird food) the original group departed. My companion, Bas, alerted me to a Water Rail lurking in the reeds. By now the light had almost gone which, in some ways, was fortunate in that I'd have been shooting straight into the sun a little earlier in the afternoon.

It took a little while to spot it at first, although it wasn't far away - the red bill was the give-away!

Eventually it came out of the reeds for a brief while, and I got some slightly better shots. I must return in the hope of getting some shots of this species in better light. 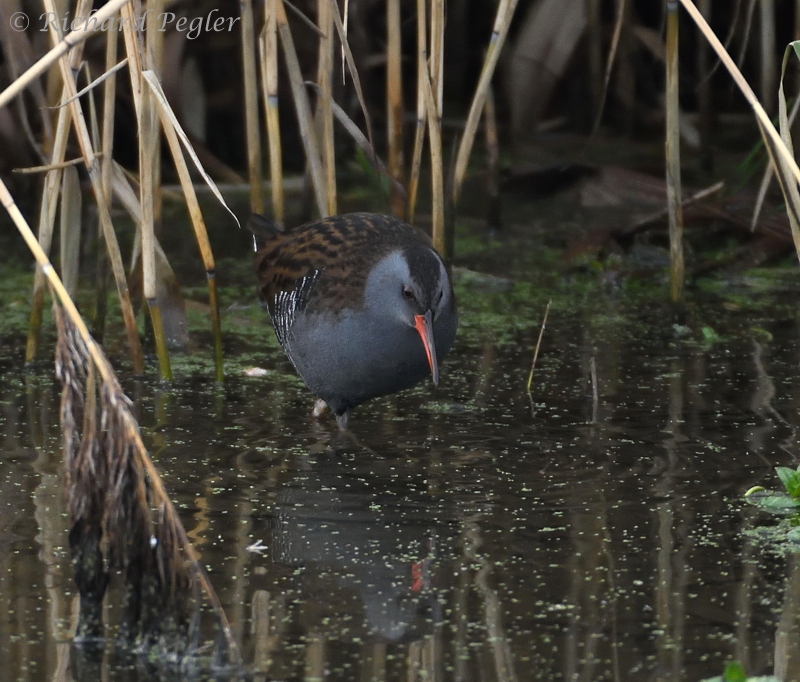 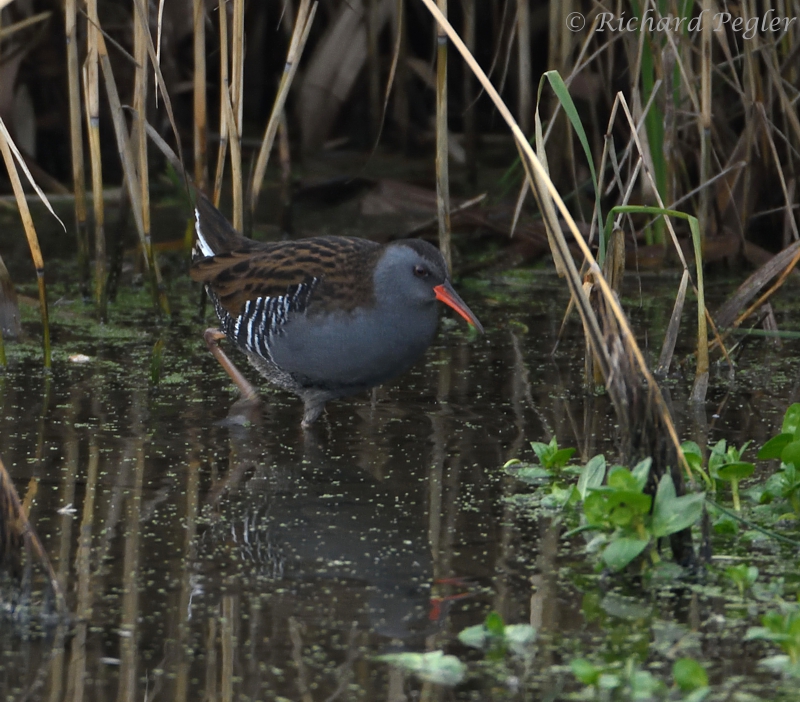 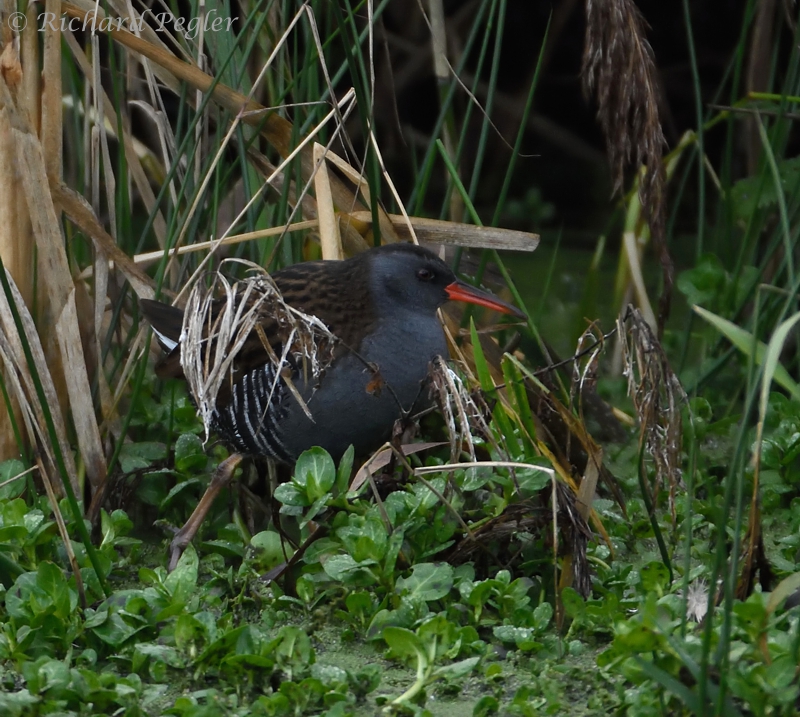 It was now getting dark, and Bas and I set off back towards the reserve entrance. The Robin was in a similar place to where it was on my inward journey, and I couldn't resit another shot. Given that it is that time of year I decided to give him a festive hat, for which he seemed grateful!

I take this opportunity to wish you all a peaceful and very Happy Christmas, and a healthy and prosperous New Year, filled with wonderful wildlife experiences.

Thank you for dropping by - - - Richard