Last week was a bit of a difficult one, weatherwise, for photographic outings. We had a lot of rain, but with some sunny periods accompanied by breezy conditions for much of the time. I did, however, manage some short outings, two of which were somewhat different to what  you might expect of me. I will explain!

I had a call late morning from a good friend to say that the previous day he'd been to see 'The Leicester Lizard'. The Lizard Orchid is very rare, usually associated with south-east England but there has been just one plant recorded in Leicestershire, having been found around 5 years ago by someone who didn't know what he'd seen, and only officially recorded (I think) two years ago. My friend suggested that I went to have a look, giving me directions.

I set off, and found the orchid with comparative ease, as it stands quite high above the surrounding vegetation. It certainly is a truly remarkable orchid. 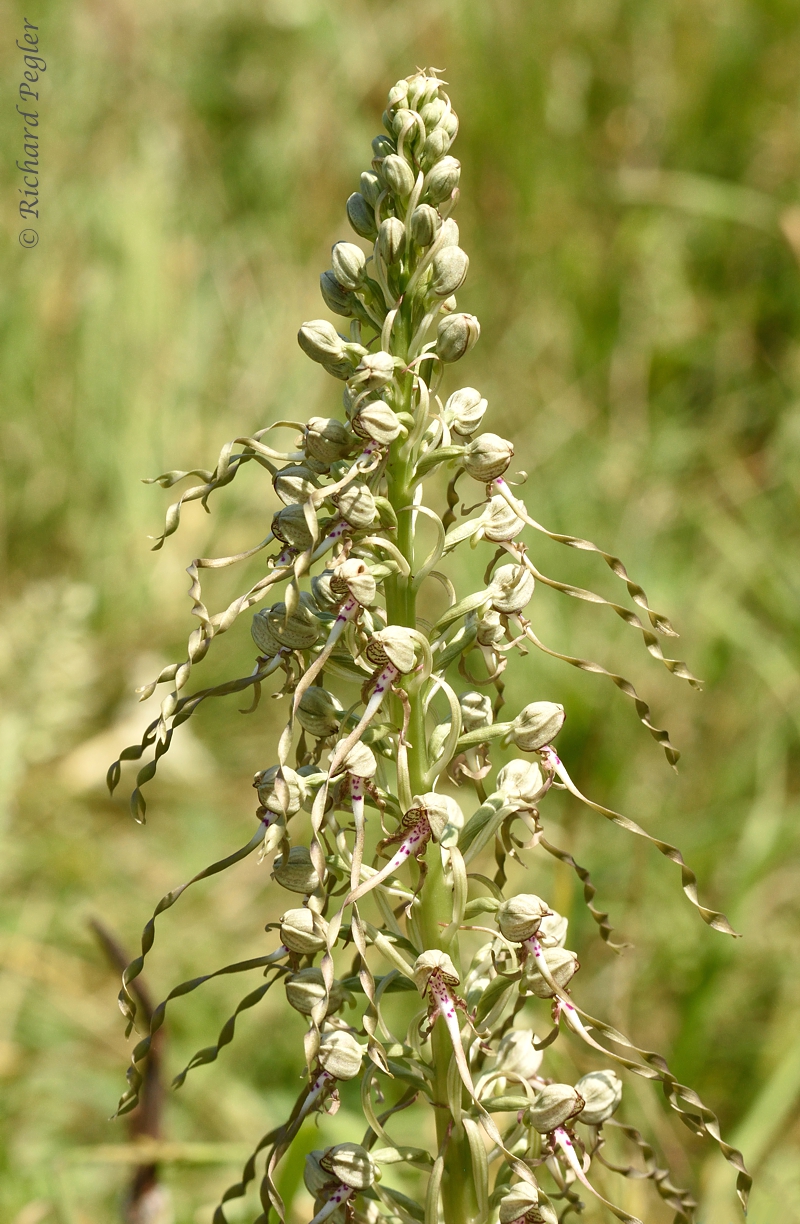 There was further excitement this year when a second plant of this species was found over the other side of the road. This is a young plant and still quite small. The flowers had not yet fully developed.

I'd been told that nearby were Bee Orchids, and was given a very specific location. It seems, however, that these had mysteriously disappeared in the past 24 hours.

There were many Meadow Brown butterflies flying around.

I was also delighted to see a Burnet Companion day-flying moth - sadly, it was a little the worse for wear.

As I had rather a lot at home that needed attending to, I headed directly home again.

I had another call, again late morning, and from the same friend, who had that morning been to Cloud Wood in Leicestershire to see the somewhat uncommon, although not rare, Greater Butterfly-orchid. Heavy rain was predicted for later, and there was a breeze blowing and photographing a flower in a wood seemed to have a more promising outcome than looking for dragons, so I set off, following directions that had kindly been given to me by a lady on the Monday, supplemented by my friend's information.

Arriving on site, I thought I was going to be in trouble as it started raining. Thankfully, however, it was a light shower which soon passed. I was soon seeing Common Spotted Orchid along the rides. 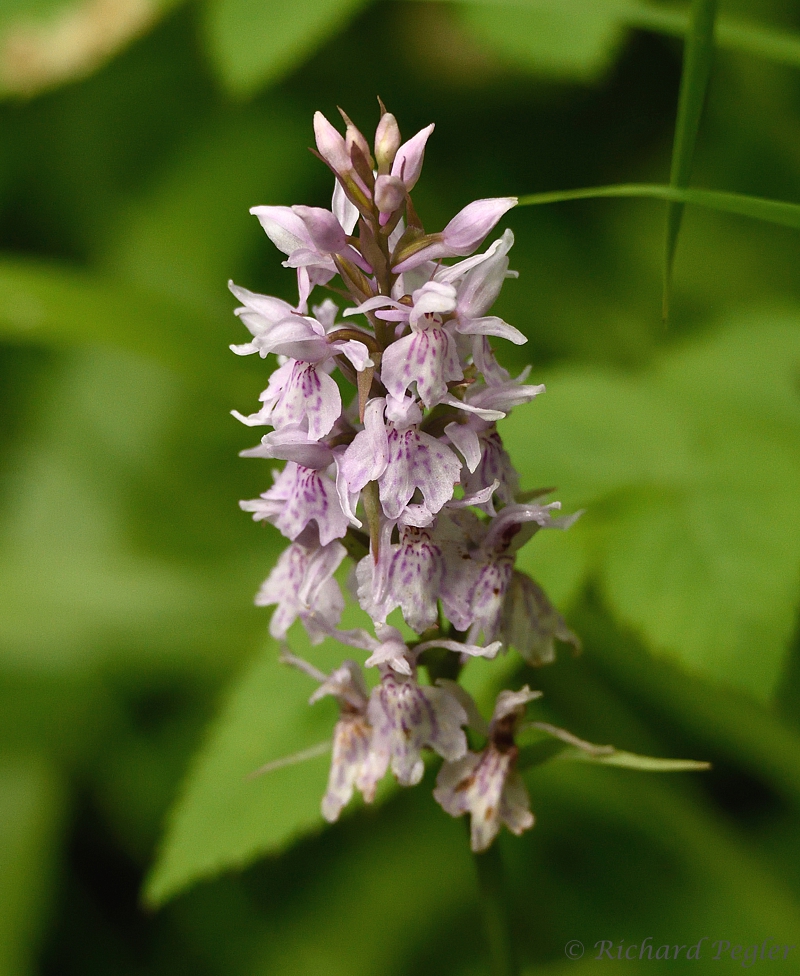 This magnificent bracket fungus caught my eye. I believe it to be Dryad's Saddle - an edible species, but I shan't be putting it to the test!

A little further on, I noticed a couple of beetles working on the next generation. On checking, I get the impression that these are quite a speciality of Cloud Wood.

I found the Greater Butterfly-orchids with no trouble at all, and was busy photographing them when I was accosted by a lady asking where she could find the Greater Butterfly-orchids. I told her that they were right in front of me and if she cared to step back to a safe distance I would come away and let her in. She was happy to oblige and we had a pleasant conversation before I left her to it. Here are a couple of shots of the orchids. Now I knw a bit more about them I realise that I could do with another visit to take better shots of an individual flower to show the defining ID features. 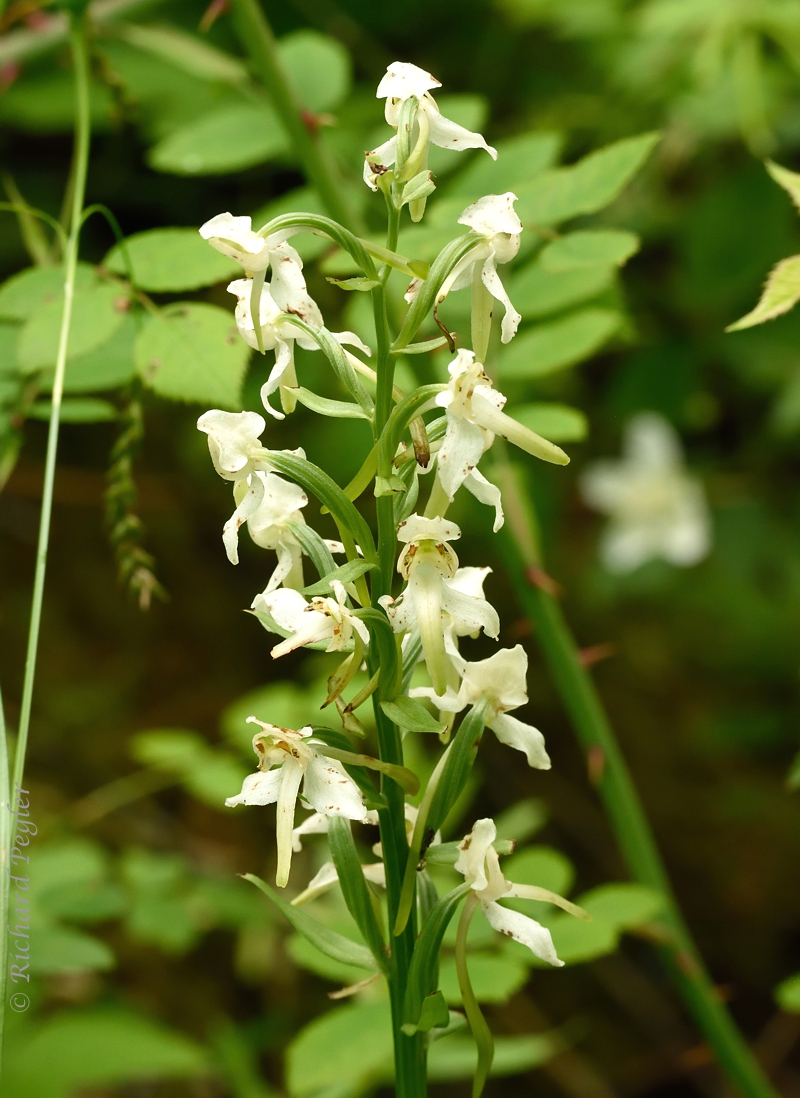 On my way back, I noticed a Bee Orchid. I wasn't surprised that I'd missed it on the way in as it was on an exceedingly short stem (probably no more than 4 inches (10 cm) long, almost hidden in the undergrowth, and in a rather poor condition. I confess to clearing around it slightly in order to get a record shot.

Further on, I spotted a Swollen-thighed Beetle lurking in deep shade - hence the relatively poor photo. I believe this was a female due to the un-swollen thighs.

In a sunny spot, before I got to the entrance, I photographed a hoverfly. Lindsay gave me a Hoverfly field guide as a Fathers' Day present on Sunday, but I have not yet fully got to grips with it, so please correct me if my ID is wrong!

From here, I had a quick session at a location near Tonge, but only photographed another couple of hoverflies. I'm not certain about the species of the first, but a little more confident on the ID of the second.

This was Fathers' Day, and I took a trip over to our daughter's home on the outskirts of Leicester. We had a lovely conversation sitting in chairs at opposite ends of the drive in front of her house. Sadly, I could not stay long as I was a long way from a convenient 'comfort stop' in this rather built-up area of the city. This meant that I had to call in at one of my strategically placed locations on the way home. Fortunately this one had a lake a few hundred metres up the path. I'd been to this lake a couple of weeks earlier in cold windy condition, seen nothing of interest, but felt sure that it should be productive for Odonata.

In spite of a stiff breeze that was building up ahead of a storm it was warm, and as I walked along the path through the long grass, clouds of damselflies were rising up in front of me, mostly tenerals. Just before reaching the lake I saw a dragonfly fly away from the lake and into the trees. I have no idea what it was but it appeared to be dark red in colour.

The thunder started rumbling as I reached the lake, and dark clouds were rolling in quite fast. I did manage to get a shot in poor light of one of a pair of Red-eyed Damselfly that I saw.

This was one of many Azure Damselfly seen.

All other attempts at photographing damselflies (I saw no more dragonflies) failed, mainly due to black clouds killing the light, but I did manage a shot of a butterfly before heading back to the car.

I got back to the car just in time to avoid the deluge that then accompanied me for most of my journey home.

It had been a week with a difference, but enjoyable, none-the less.

I may be having to take a break from blogging for a while as we are now in a period of turmoil here, and there's no telling what the future might bring. What I do know is that we are scheduled to have three events happenening next week, each one of which is going to take us way out of our comfort zone, considering the Covid situation, and we're expecting to be severely distracted.

1.) They are replacing the gas main network in our area, and on Monday they are going to replace the feed from the main pipe to the meter in our house. Depending on what they find, at best this will entail them coming into our house to turn of the gas, slide a new pipe up the centre of the existing pipe, connect it to the meter, then go into all five of our downstairs rooms (snug, my study, kitchen, dining room, lounge) to check the gas appliances when they turn the gas back on again. At worst, it will entail them digging up our drive, to put the new pipe in, and moving our gas meter from under the stairs to an ouside wall, and running new gas pipes through two of our rooms - this in addition to the 'at best' scenario.

They will then need to do the whole 'turn off', and 'turn on and check the appliances' procedure again after they replace the gas main.

2.) At the weekend we developed a leak in our mains water supply. At first the water company thought it was on 'their side' of the system, but it now turns out that it's on our side. At best this will entail them digging up our drive to get at the leak. At worst, if it is under the property, it probably means digging up the floor in our tiled entrance lobby. Fortunately, it looks as if , other than the possibility of them having to enter the entrance lobby, they won't have to enter the house.

3.) One of our phone lines has developed a fault to the extent that it is virtually impossible to hear the person on the other end of the line. We have an engineer coming on Tuesday. Whether or not he needs to enter the house remains to be seen.


Until the next time, take great care, and stay safe!