Keeping going with my weekly updates, this one features a week which was, by and large, fairly routine, but with one somewhat bizarre happening! It was a week when I only managed to get out birding once, with unexceptional results, and out for a picnic lunch with Lindsay on another day, again with little sighted.

This is how the week unfolded.

The numbers of bird species seen in the garden each day is now declining, but the female Blackcap was still with us, as were visits from the Stock Doves and Siskins. I only managed shots of a female Siskin that day. I was nearly fooled by that second shot as she'd positioned herself so that a shadow fell on the crown of her head, suggesting a male at first glance! 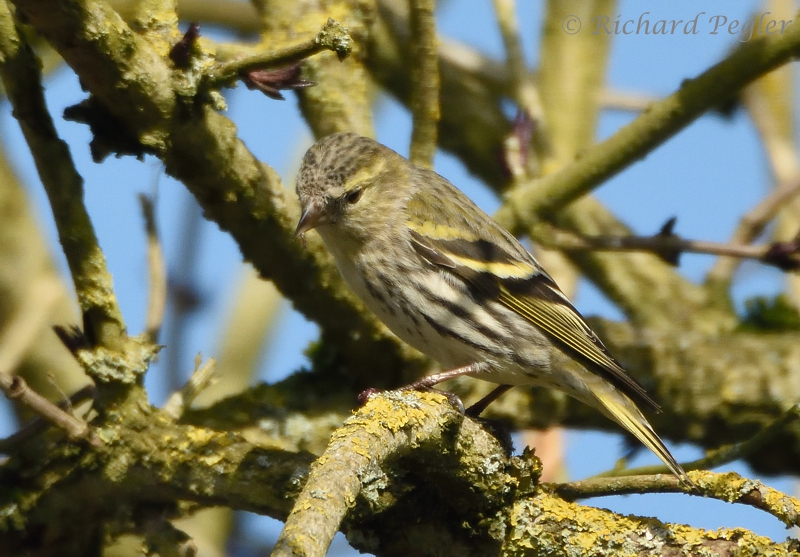 It was a wet morning, and I only managed a grabbed shot of a Coal Tit that alighted briefly on a branch that the House Sparrows have stripped of its bark for nesting material.

In the afternoon, the weather had brightened up a bit, and so I went for a walk through Willesley Wood to Thortit Lake.

If you read my post where I mentioned a magical collection of figurines in Willesley Wood, placed there by schoolchildren (you can find it with this link), you will understand my disappontment at finding all had gone and the descriptive note that was with the figurines had been cast into a nearby ditch.

Thortit Lake and surrounding Willesley Wood were looking particularly beautiful in the sunlight.

Wildflowers were in bloom and looking attractive

There was nothing unusual in the way of birds on, or around, the lake. Lindsay had been here a few days beforehand and had been warned by a passer-by that there was an ugly scene going on at the lake, with the resident pair of Mute Swans seeming to be violently trying to persuade their five youngsters to depart. When I arrived, there were two youngsters looking very relaxed near the water's edge, and the adults on the water, acting as serenely as ever! 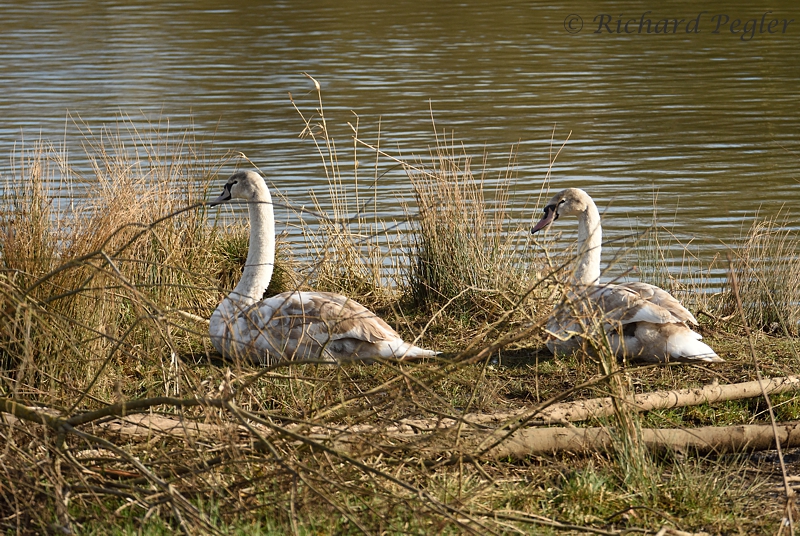 There were Coots and Moorhen around, as usual.
Having turned round to head back, I'd not gone far before I saw a small bird fly into some reeds. I waited patiently and eventually a Reed Bunting showed itself. However, no matter how hard I tried, I couldn't get a view of it without intervening foliage. This is the best I could muster.
That night, the moth trap went out, and I only managed three moths of two species!
Wednesday, 17th March
Wren doesn't seem to visit us very often, but when we do get a visit, it is usually visible for a while. On this day, we first got a sighting when it landed on one of the trail cams late in the afternoon.
It spent a while wandering around, most of the time in shade, but I did manage a few shots. 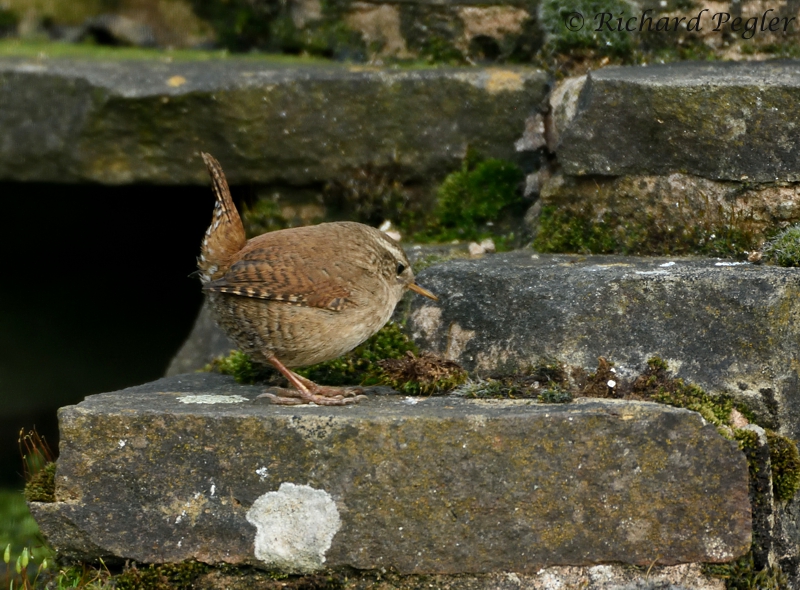 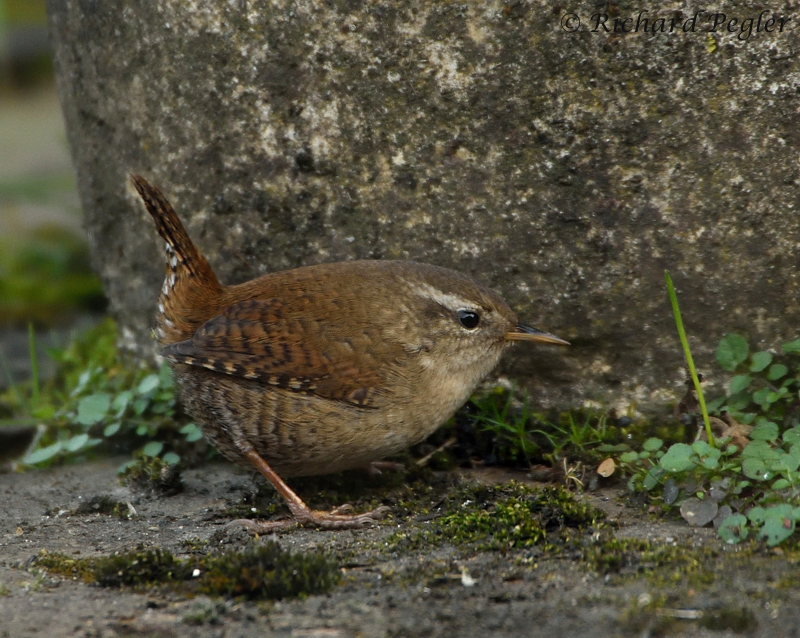 I couldn't resist a shot of the Magpie that arrived during this session.
Thursday, 19th March
I didn't manage to get a shot of the Sparrowhawk that momentarily put a foot down in the garden without catching anything. We did have a visit by four Siskin (2 male, 2 female). One of the females did der best to conceal herself against a branch, and a male obliged by sitting out in full view but, sadly, didn't pose side-on.
Friday, 19th March
It was late in the morning, and I was sitting at my computer sorting out, with Lindsay's input, a click & collect shopping order for a local supermarket when I noticed something large drop down outside my study window. "What the heck was that?" said I, and Lindsay peered out of the window and pronounced 'it's a pheasant!'. I recently commented that I was surprised to get a Yellowhammer in our small suburban garden, and I was nearly as surprised to see this pheasant which, usually, would enjoy a similar sort of habitat as a Yellowhammer. However, we have had a pheasant visit the garden once before, maybe about twenty years ago after a strong gale. That was a female, and this was a male. It wandered around for a while, pecking at the spillage from the feeders, before disappearing round the corner to outside our back door from where it must have taken off and departed . 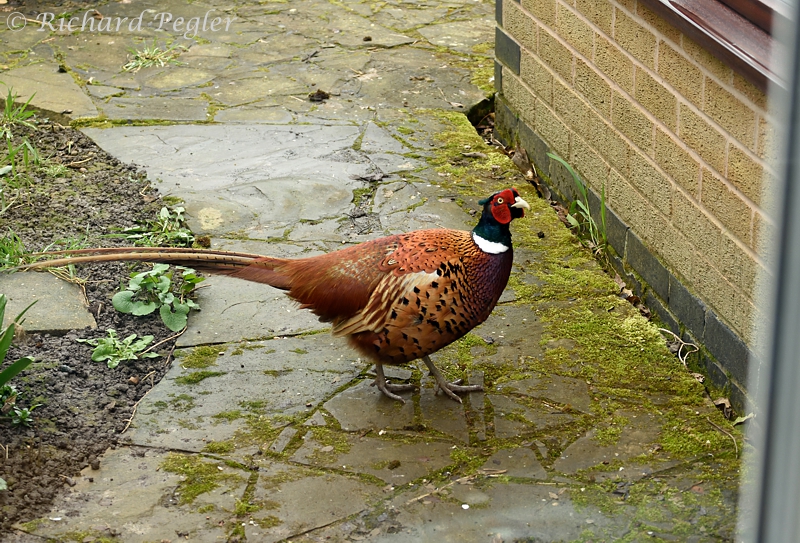 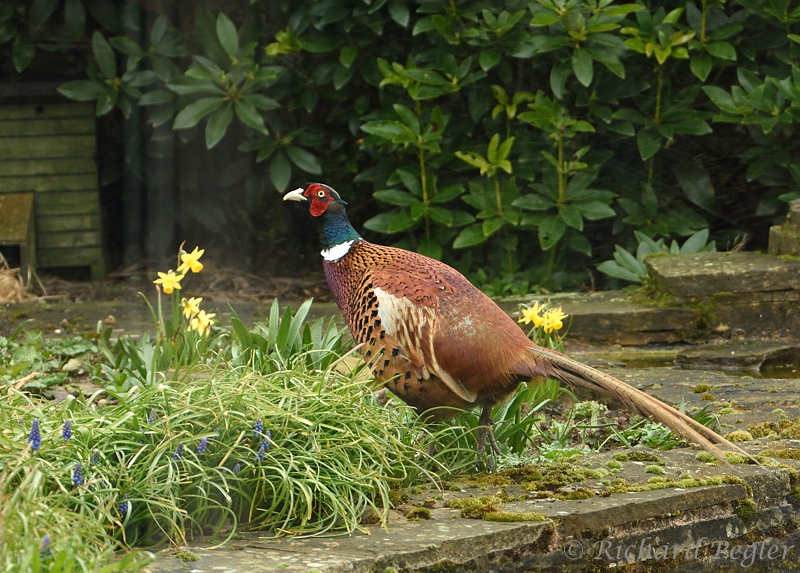 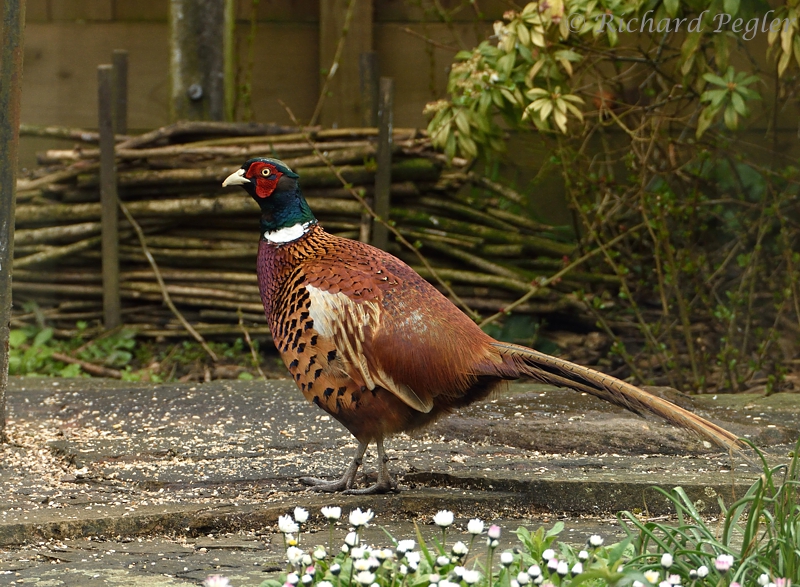 Saturday, 20th March
The trail cams caught a couple of altercations between hedgehogs during the night. This is, I believe, purely one hog defending a food source from another. I think that we possibly have had a reduction in numbers of hogs visiting over the past month, although I am confident that we still have at least three on a regular basis.
Sunday, 21st March
Lindsay and I decided to break the 'stay at home' monotony by taking a picnic lunch to a place we could park at by my 'local patch'. This was a totally acceptable activity under current regulations. It was a very pleasant experience, although nothing of great interest was seen, and the only photos taken were of a Blue Tit. 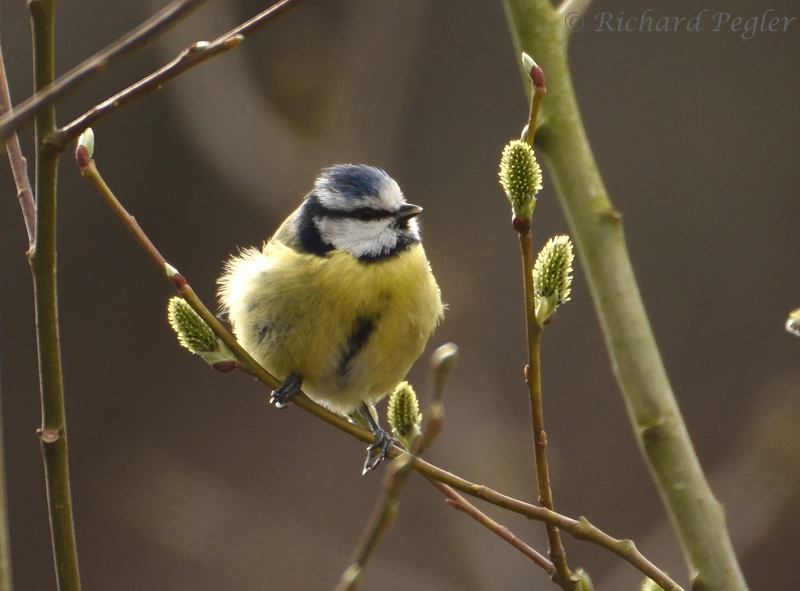 That evening, one of the trail cams caught a Magpie helping itself to the dried Black Soldier Fly larvae that I'd been a little premature in putting out for the Hedgehogs. Black Soldier Fly larvae are a safe high-calcium alternative to  mealworms which are very low calcium and potentially dangerous to Hedgehogs and birds if consumed in any quantity as they can cause catastrophic bone disorders. It seems that this trail cam is much better at capturing the irridescence in the plumage of these birds than my DSLR is.
This brings me to the end of my report on this past week.
Leather Dragonfly Bag
A few weeks ago I showed a leather 'patch' that I'd created to mount on a leather bag, specifically for my dragonfly hunting activities, that I was about to start making. I had some very kind remarks about this, including expressions of wanting to see the finished result. The bag is now finished and, although there is room for improvement, I am quite pleased with the result. Here are a couple of photos of it. 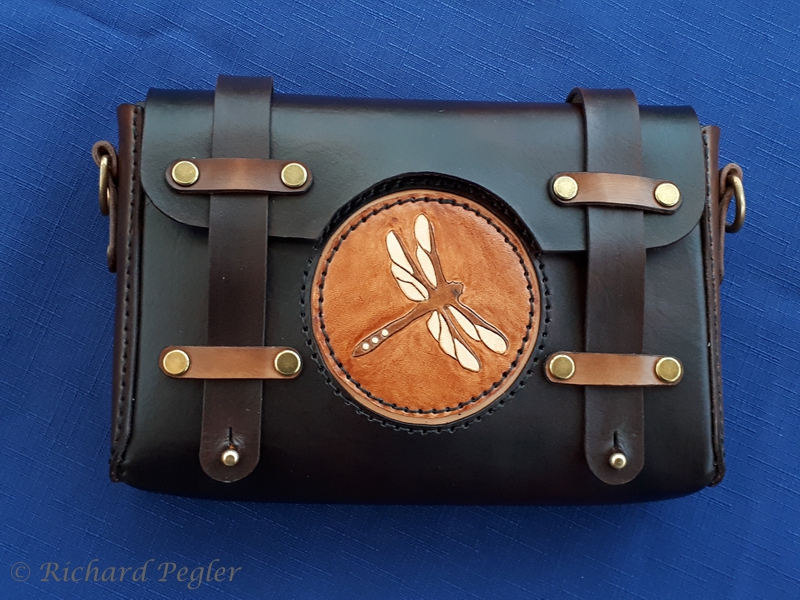 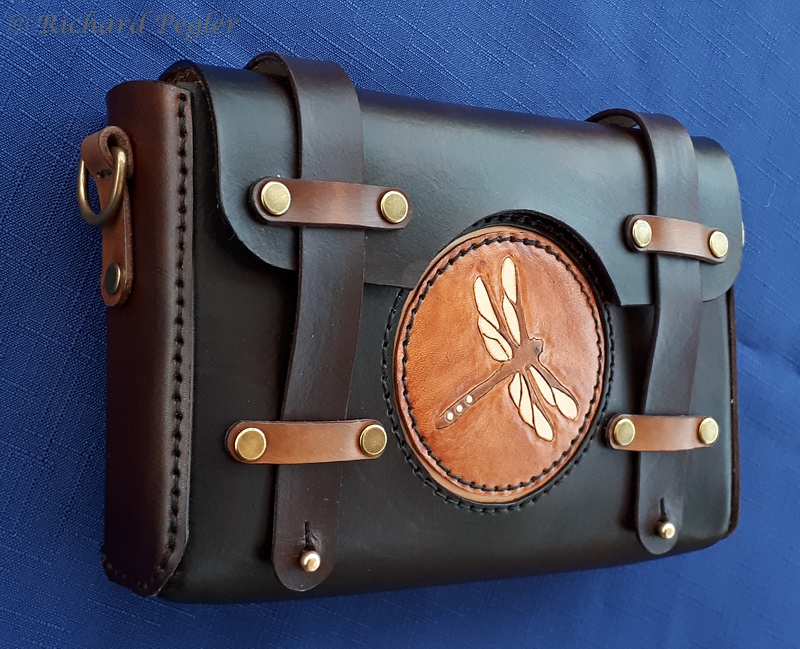 I now have to make a couple of straps that will enable it to attach to the front of my OP/TECH USA dual camera harness so that it sits on my front just at lower rib-cage level.
Lindsay has requested a larger version of this for a shoulder-bag, with a modified design (central clasp, rather than two side straps), as a Christmas present. I shall be happy to oblige!
This week has been a very strange week so far, and so I suspect that next week's post will be rather short. In the meantime, take great care, stay safe, and make the most of any opportunities that come your way. Thank you for dropping by - - - Richard